As a fad, these diminutive creatures with their big, strangely colored poofs of hair, invaded the United States in the 1960s and seem to have considerable staying power.  Over the years, troll dolls have disappeared and reappeared numerous times to varying degrees of success.

When I was a kid in the 1980s, troll dolls were popular.  Really popular.  Like I remember my sisters begging my parents for trolls and then a week later our house was littered with the stupid little bastards and their multicolored, Don King hairstyles.  At the time I hated them.  They looked too much like girl toys and I was far too preoccupied with GI JOE, the Inhumanoids, and Sectaurs—but if the Battle Trolls had been around, I might’ve taken notice.

Arriving in the early 1990s, Battle Trolls were a naked attempt by Hasbro to market troll dolls to boys.  Some madman/woman at Hasbro HQ decided to take troll dolls, give them aggressive designs and arm them with weapons.  The line consisted of troll cyborgs (trollborgs?), troll knights, troll superheroes, troll barbarians, and troll soldiers and their tagline read “Big Haired Dudes with Bad Attitude”. 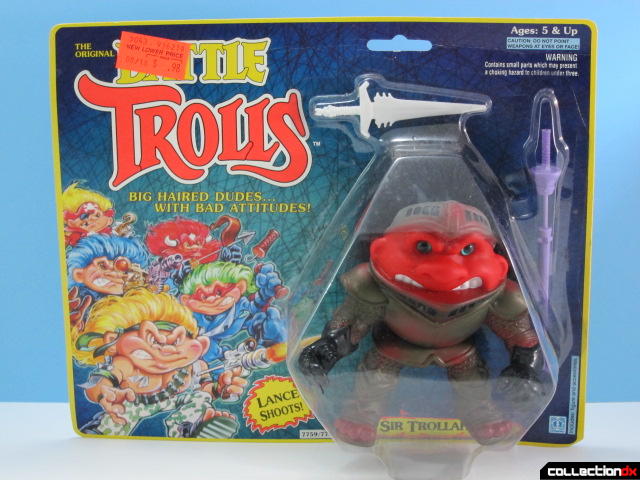 I found Sir Trollahad last year at a flea market in rural Georgia and I instantly fell in love—and not because Battle Trolls are great toys, mind you, but because they’re so unrelentingly cheesy that they crawled immediately into an empty space in my tiny heart. 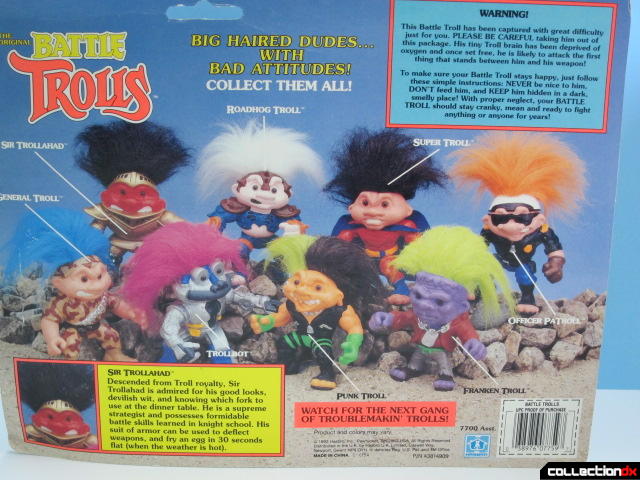 In a way, Sir Trollahad is iconic for the line.  His concept is that of a troll knight in shining bronze armor.   The back of his package has a silly character profile:

Descended from Troll royalty, Sir Trollahad is admired for his good looks, devilish wit, and knowing which fork to use at the dinner table.  He is a supreme strategist and possesses formidable battle skills learned in knight school.  His suit of armor can be used to deflect weapons, and fry an egg in 30 seconds flat (when the weather is hot). 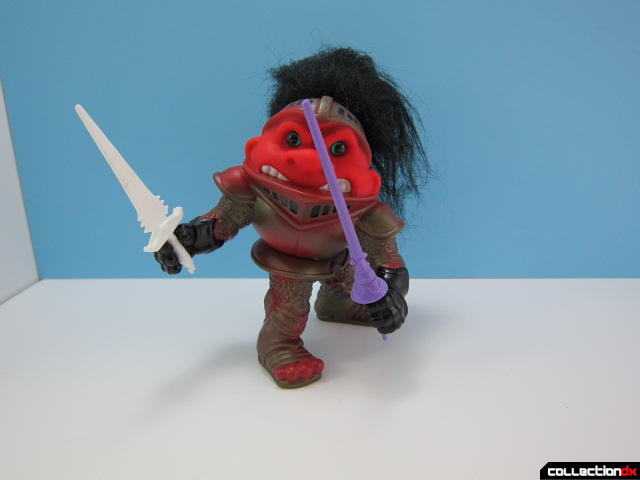 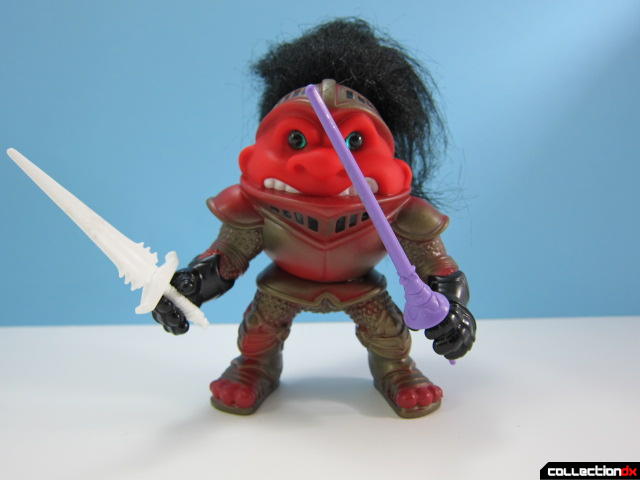 As a character, Sir Trollahad sounds like a debonair, suave knight, but his sculpting is decidedly mediocre even by early 1990s standards.  Sir Trollahad shares the standard body used for all of the Battle Trolls, which consists of a stunning, single-point of swivel articulation in the waist. 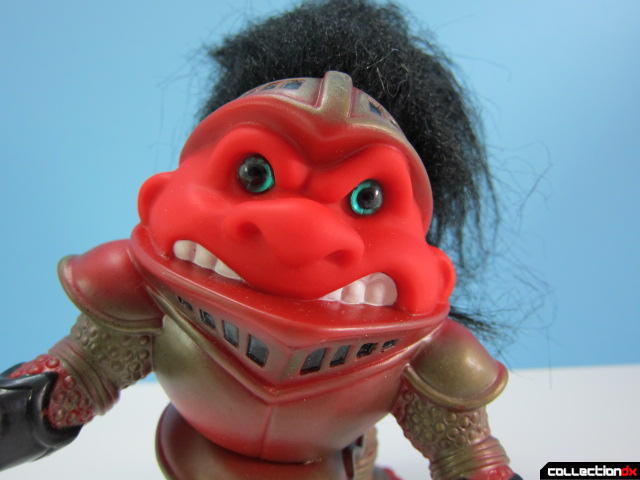 Sir Trollahad’s face sculpt is simple but effective, with a serious grimace that has been partially obscured by his molded armor.  I really like his eyes though—they’re blue beads that truly pierce into my soul (well… not quite, but they look neat). 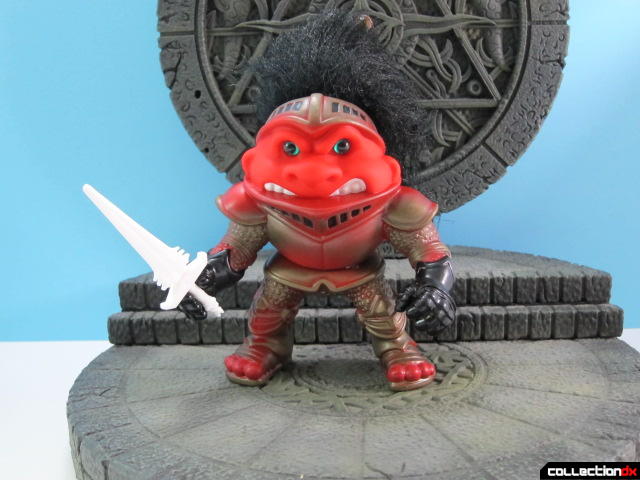 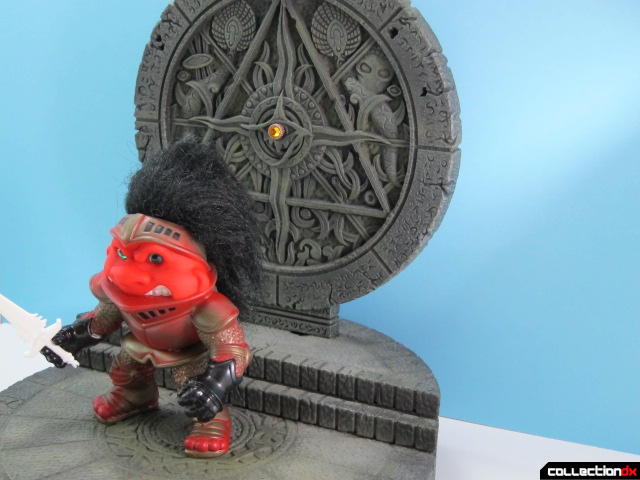 His bronze armor, which makes up much of his body, is pretty poorly painted.  On both Trollahads I own his armor paint is very washed out, showing off bare red plastic underneath.  Other than the flawed armor, there are a few black accents to his sculpt, namely to the gloves and the visor of his helm. 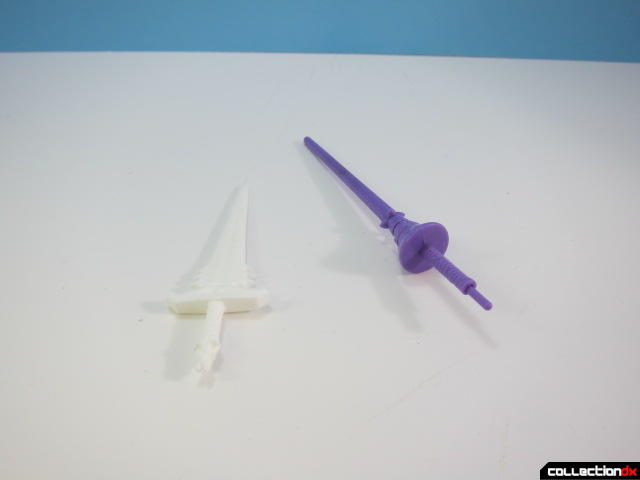 Trollahad comes with two accessories:  a white broadsword and a shooting lance.  The sword is okay, but the lance is meant to be the show-stopper, although its shooting mechanism is decidedly low-tech:  you flick the butt of the lance and the lance-head shoots out.  Fun for kids, until you consider the fact that most action weapon features in the era had springs. 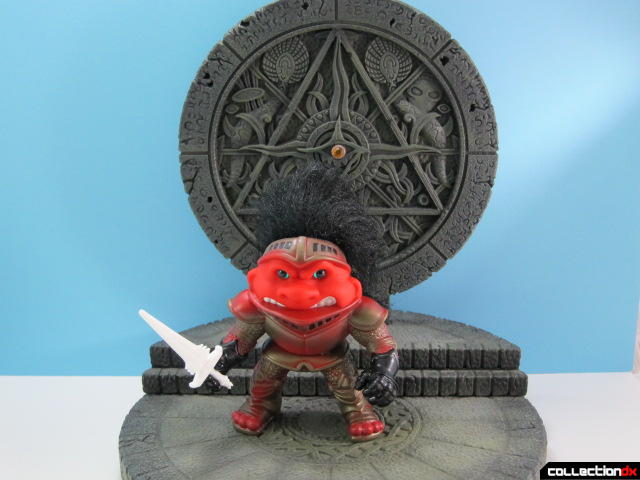 So there you have it:  Troll dolls for boys.  Trollahad isn’t an amazing toy, but I like him because the concept of a troll knight is silly and the design is completely cheesy. 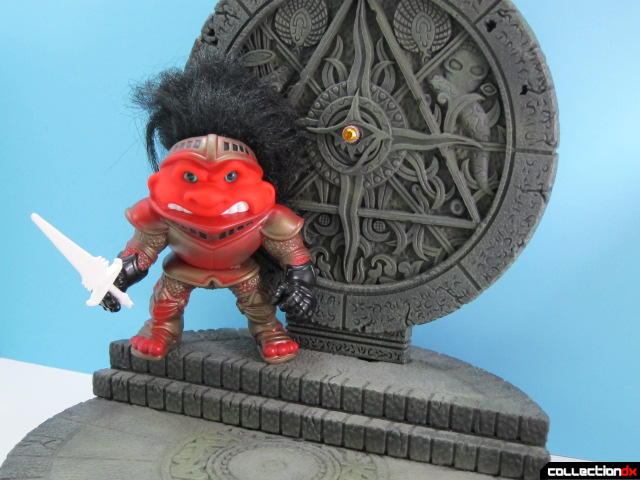 4 comments posted
This is straight-up

This is straight-up terrifying.

Anyone have Sgt. Troll's Crossbow? Looking for a mint/like-new specimen.

I have a carded Sgt. Troll, but a small section of his bubble lifted and the crossbow must have fallen out. When he was given to me as a gift, the crossbow was not present in the bubble, but the gun is still there.

If someone has it, I'll buy it. Maybe even crack ol' Sarge open and review him for CDX.

I remember this line. The commercial was SO 90's!

I'd like to see reviews of more of these! I had a viking troll and a Terminator troll when I was a kid, from what must have been a later series of Battle Trolls.

What's that display base from? Sir Trollahad actually looks pretty serious standing on that.