Longtime readers may remember I have kind of a thing for the Constructicons. Lately, the sinister six have been the big green center of the current Combiner craze, and I admit to being swept up in the fervor. Playing way too much Transformers: Devastation for a few weeks got me eager for anything Constructicon related, and so while perusing the merchandise at a Newbury Comics, I decided to gamble my money on a blind-boxed Transformers Action Vinyl from The Loyal Subjects. Fortunately, I came out one scrappy lil' Scrapper richer. 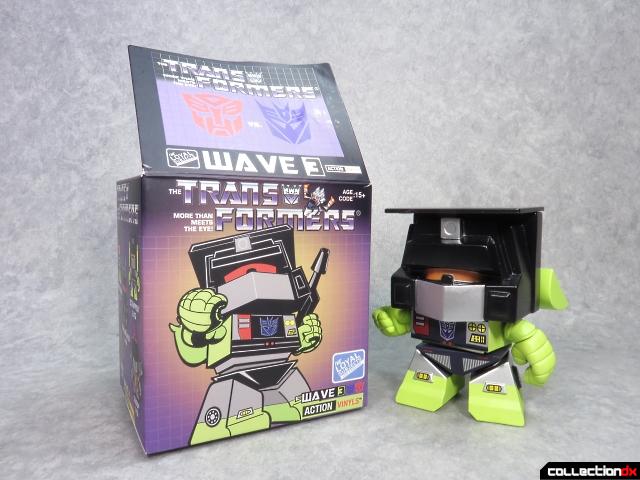 This figure comes from Wave 3 of The Loyal Subjects' line of Transformers vinyl figures. Oddly enough, Scrapper is the poster boy for the 2014 assortment, so you'll see his mug on every box, regardless of its contents. 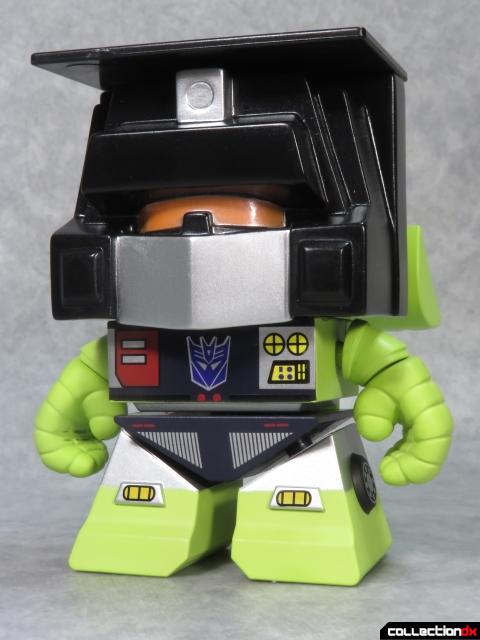 Scrapper stands about three and a half inches tall, and is an attractive little knickknack. While this type of figure is normally outside of my wheelhouse, I appreciate what TLS was able to do with the toy in terms of sculpt and finish. 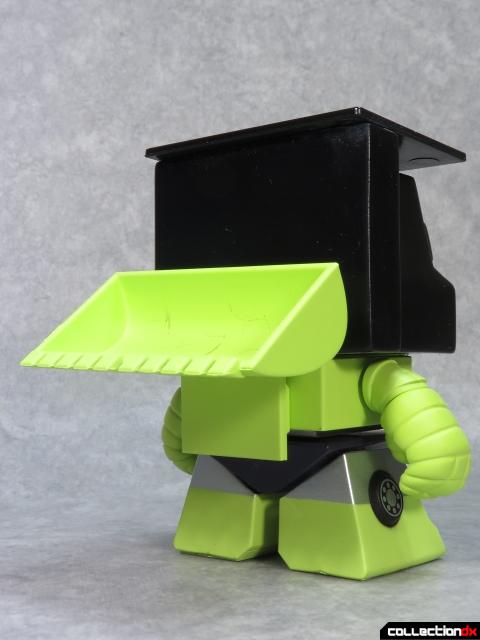 Figures in this line all share the same base body, with a different head and other accoutrements for each character. Scrapper gets his trademark payloader hoodie, which manages to feature a single point of articulation in the form of a hinge at the base of the shovel. 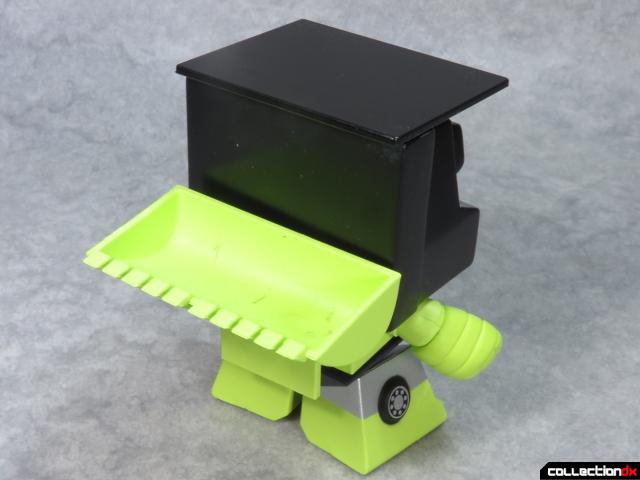 It's a nice touch that helps make this rendition of the Constructicon leader feel complete. One that almost makes me forgive TLS for orienting the shovel in the incorrect position (the scoop should be facing down). 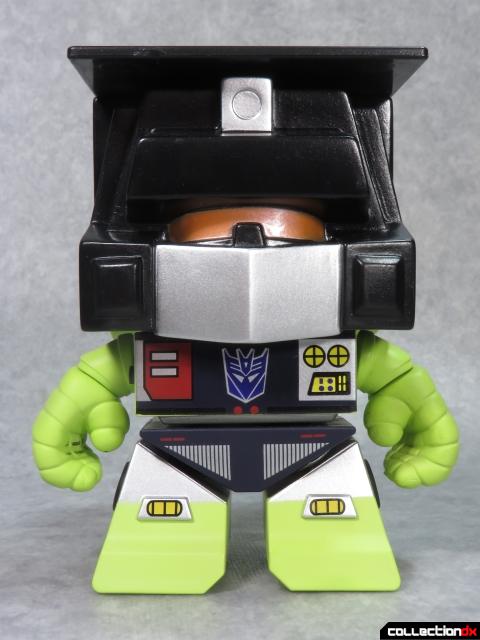 TLS went with a mix of cartoon and toy details for their version of Scrapper, with his head being very animation accurate (but SD) and his chest mimicking the stickers from the original toy. 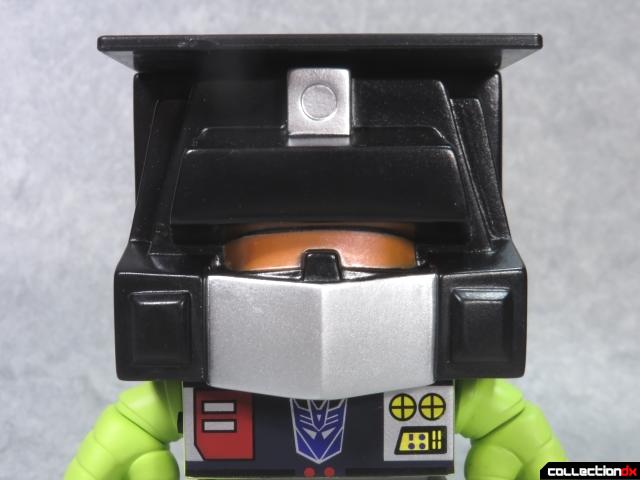 His head is especially well done for this style of figure, with good paint apps and an acceptably puffy sculpt. 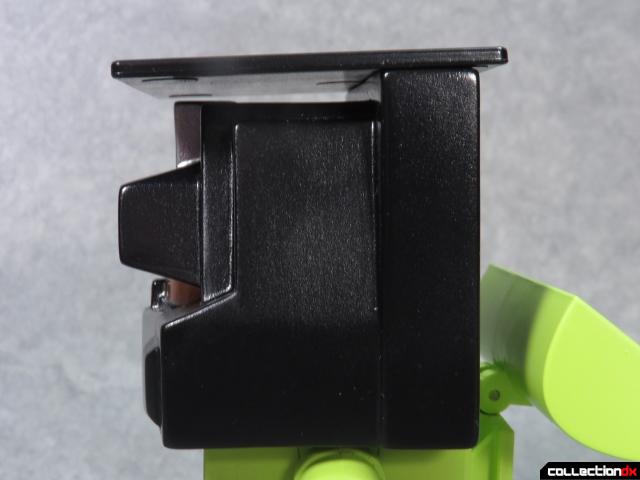 They even got his weird "graduation cap" right. Scrapper's flattop is a little crooked, but not worryingly so. 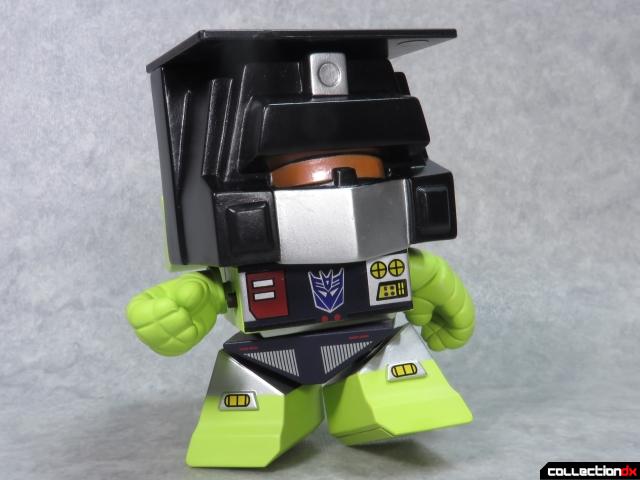 As an "Action Vinyl", Scrapper has a fair bit of articulation in his boxy body. He features ball-jointed shoulders and hips, and swivel points on his neck, waist, and wrists. As a whole it's nothing mind-blowing, but I think it gives the toy a bit more personality and makes him a fun desktop plaything. 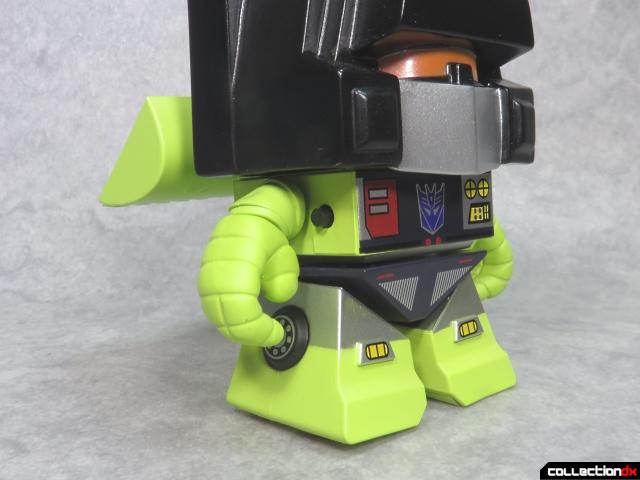 Scrapper also features a sound box in his body that plays two versions of the transformation sound (ascending and descending), as well as an odd remixed snippet of the cartoon theme song that adds a car starting and and driving away with screeching tires. I'm not really sure why TLS thought Scrapper needed this gimmick in particular, as some of the other figures from this wave have more character-specific ones, but I wished they'd tapped Michael Bell to record some lines for the toy. Nothing fills Autobots with a fear (of the likes they have never experienced before) than Scrapper's evil raspy voice. 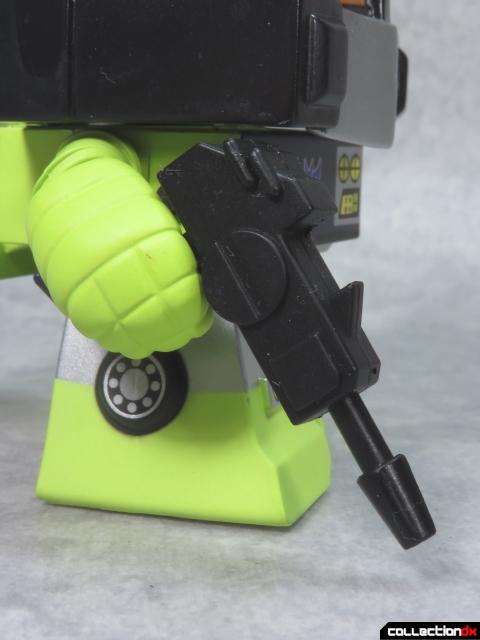 Finishing off the package is a surprisingly accurate version of Scrapper's laser pistol. This weapon can fit into either hand. 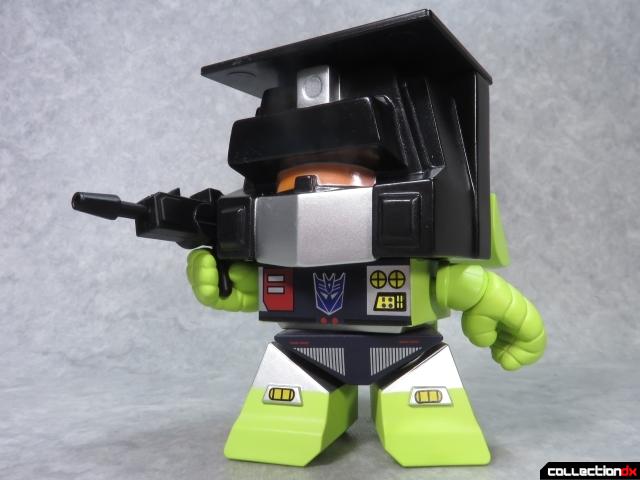 And he's got enough articulation to brandish the gun with a fair bit of (cute) menace. 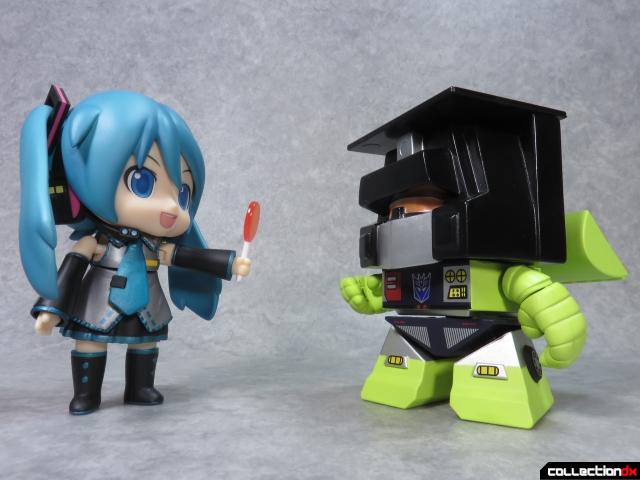 "The more time I spend on Earth, the stranger the flesh creatures become. Just what are you?"

Scrapper fits right in with my Nendoroids, which I think is just dandy.

Overall, while I'm pretty happy with my Action Vinyl Scrapper, I'm not about to run out and try to collect more from this line. I had seen the same handful of boxes at my local Newbury Comics sitting around on the shelves for over a year, and decided to take a chance on getting one of the three Constructicons from the 2014 wave. Again, this is not the kind of toy I usually collect, but I am happy to have gotten Scrapper as he's my favorite Constructicon.

2 comments posted
If that shovel bothers you

If that shovel bothers you too much, it shouldn't be too hard to pop that pin out of the hinge and flip it around.

I don't think it would fit near his giant head if turned around, though （ｉДｉ）