Rook is another completely new character in the current Combiner Wars kerfuffle. For a while, it seemed like he was the permanent replacement for everyone's favorite giant motorcycle leg, Groove, who had since been reassigned to chest plate duty. Then, the Unite Warriors version of Defensor (aka Guardian) showed off a new deluxe-scale Groove in place of Rook.

What does all that mean to buyers outside of Japan? Only time will tell. However, right here and right now I can tell you that Rook is a really cool Protectobot in his own right. 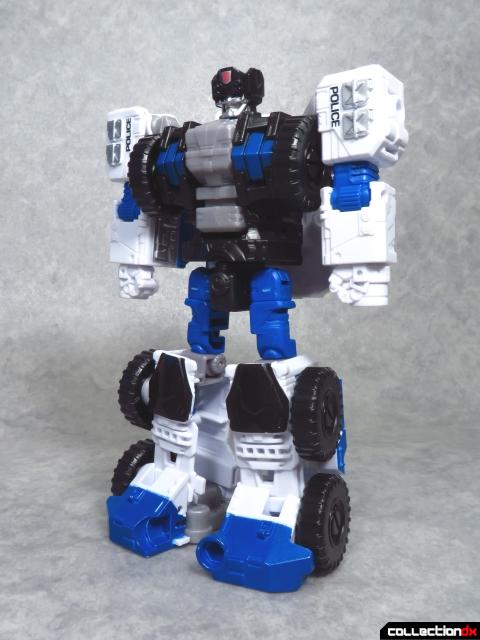 While not based on any existing character, Rook is immediately recognizable as a modernized Scramble City style Transformer. He has a clean, blocky silhouette that says he's a big n' tough guy. Like the rest of the Combiner Wars limbs, he stands about five and a half inches tall. 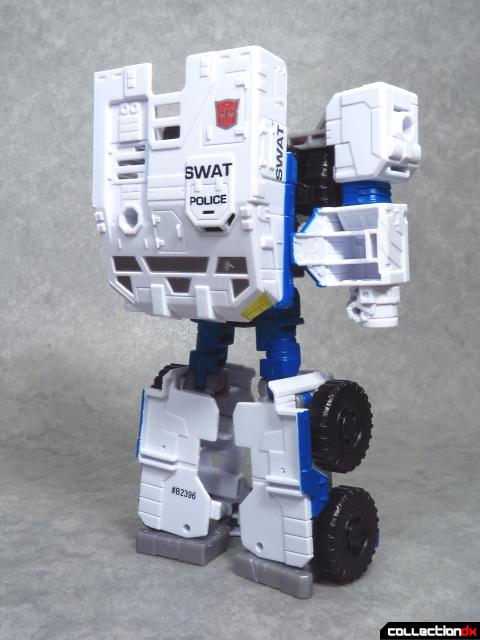 Rook converts into a 6-wheeled APC with SWAT markings, and this motif carries through to his robot mode. Like the other limb guys, a chunk of his vehicle mode rests proudly on his back and looks like a piece of armor. If I have one minor complaint about his appearance, it's that I wish the blue flaps on his arms could swing down to close up the gaps on the back of his forearms. 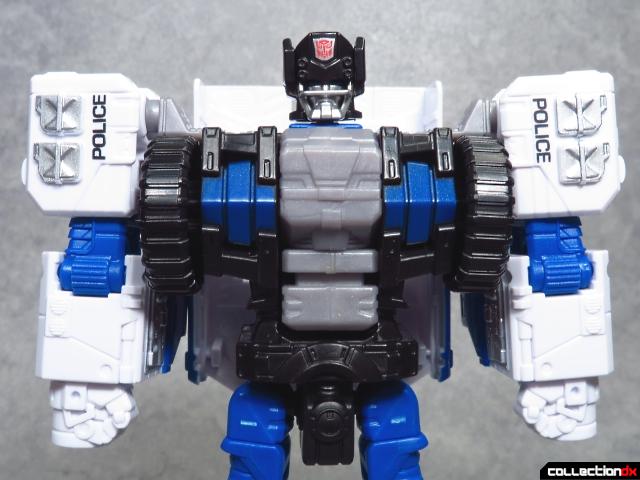 His colors keep up with the Protectobot theme, while being uniquely suited for a solid block of a robot. True to his name, Rook's helmet is made to resemble the chess piece, which fits his overall attitude of being a defense oriented guy. 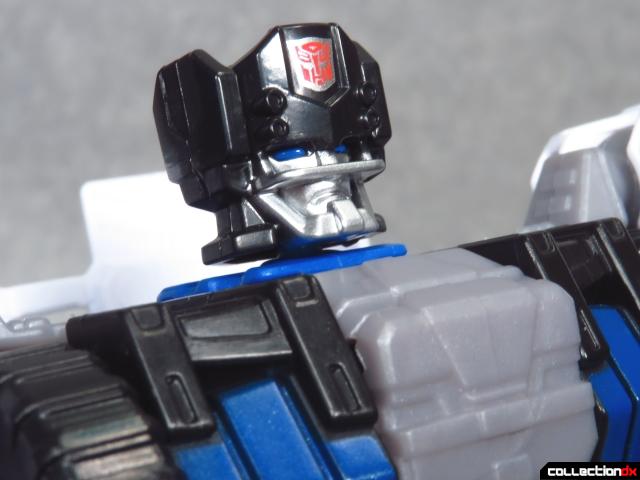 Adding to the motif is an old-style football face guard. 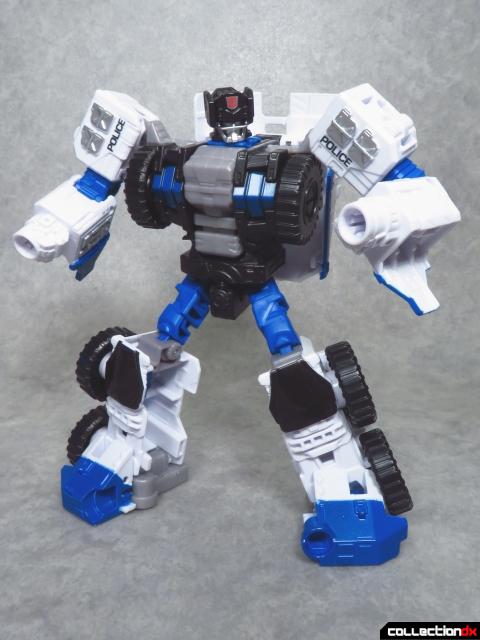 Rook has the usual array of articulation for a Combiner Wars deluxe, but adds a part of ankle tilts to let him stand out from the crowd. This little extra touch was added because the wheels near his heels actually go a bit farther down that his feet reach if left in a stock straight pose. Rook can also swing his shoulders back and wiggle his toes, due to how he transforms. 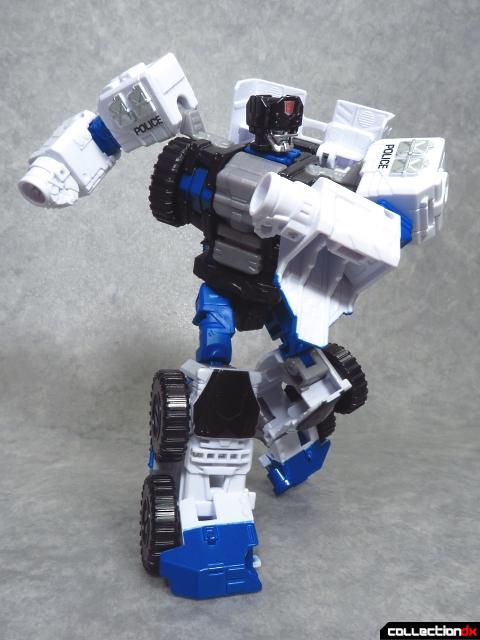 All of his joints are nice and tight, allowing Rook to rear up like a one-robot battering ram. 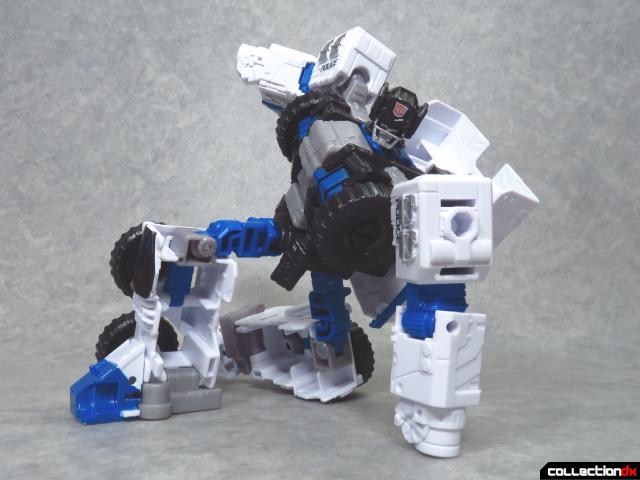 And he can even do the Iron Man pose. 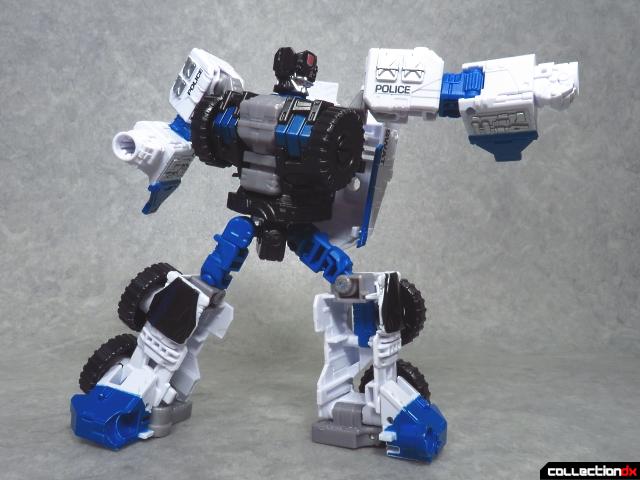 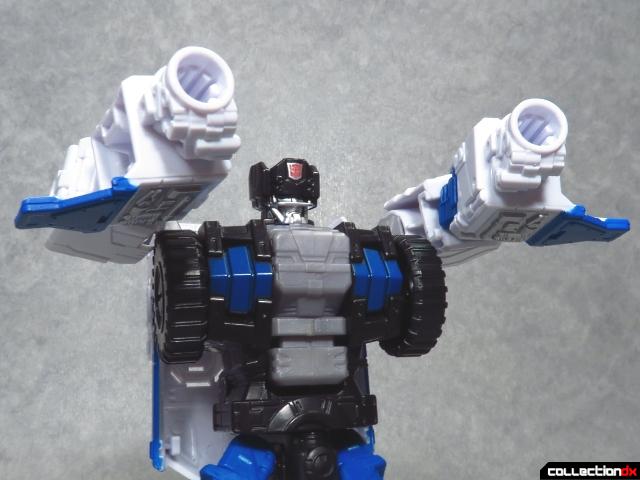 Do they shoot napalm, water, or other plot specific liquids? Who's to say. Being able to fatally fist bump a chump is pretty hardcore though. 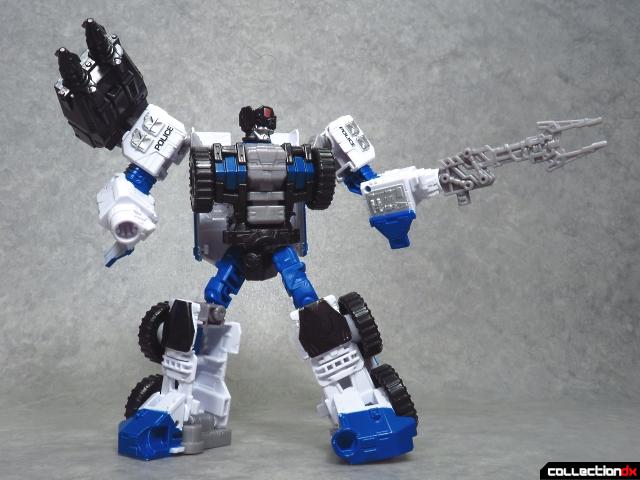 His accessories consist of the hand/foot/gun in a version equipped with missiles, and a non-functioning grabby claw. Lacking regular hands, Rook wields his gear by plugging them into his knuckle guns. He also has ports on his shoulders for that classic Takara SF Land look. 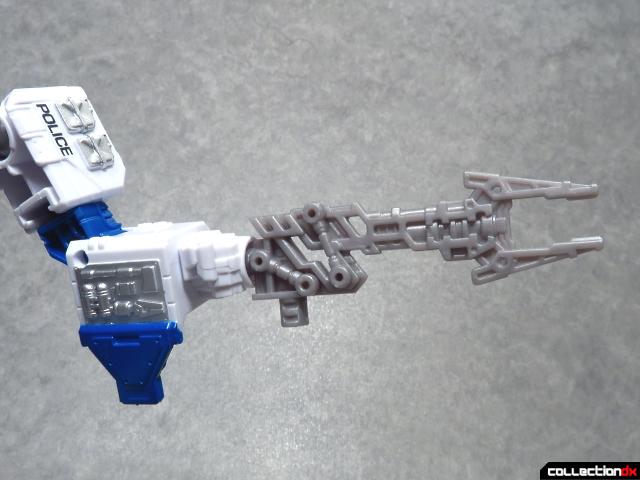 While the idea of a rescue claw is a neat idea, I wish it had some kind of gimmick. Still, it's a nicely detailed little thing. 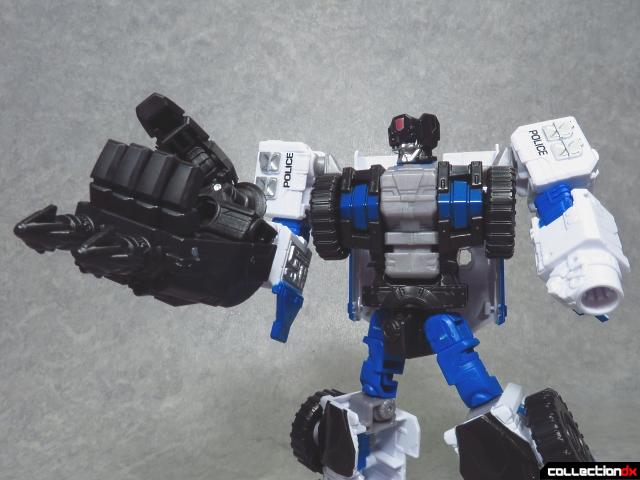 Probably the best thing about Rook's knuckles is, how you can plug in one of the combiner accessories and give him Hulk hands! 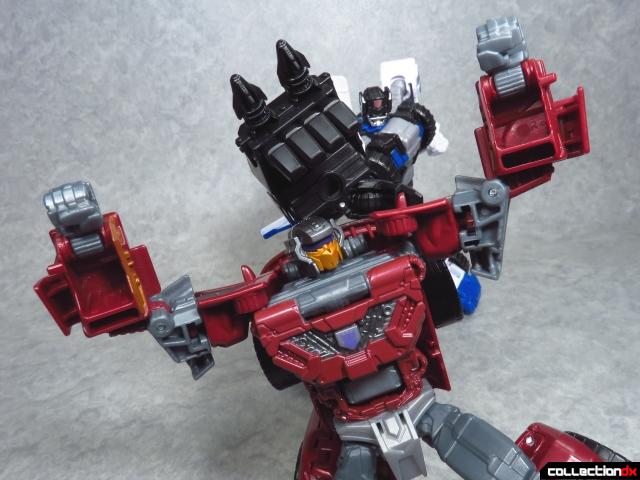 "Stop! My only crime is snarky negativity!" 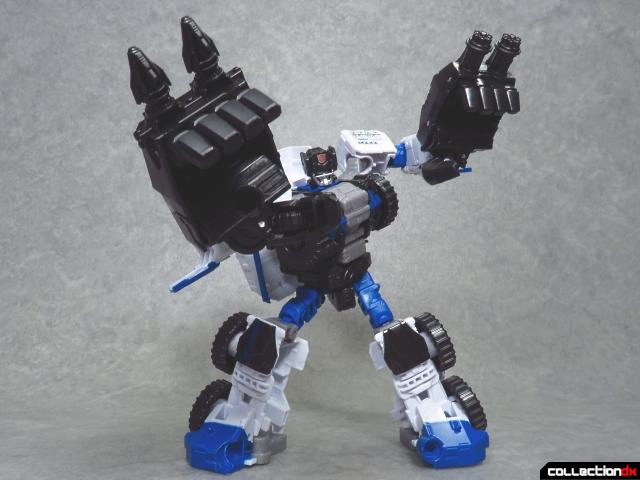 Borrow another hand from a fellow Protectobot for grabby fun times. 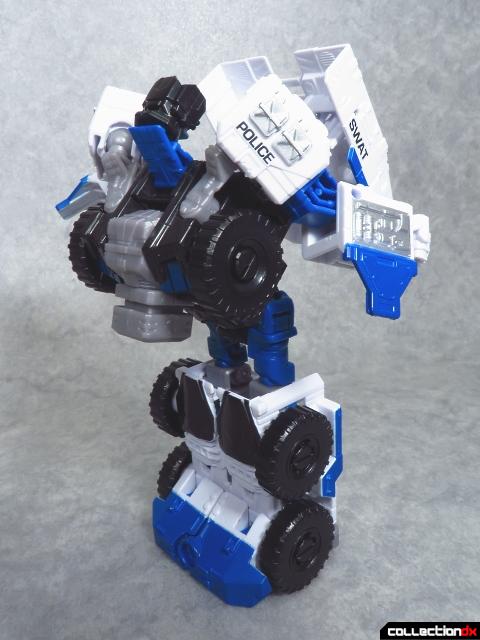 Rook's transformation is straightforward and satisfying. For his other modes, his arms tab firmly into his back. The armored backpack also tabs into his arms when Rook is in limb mode. This leaves his legs to form a forearm or continue into APC or leg mode. Flipping Rook's head back allows the combiner joint to flip out from his chest. 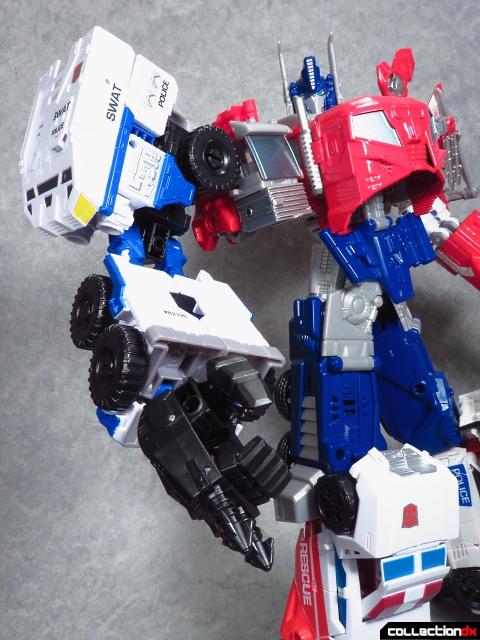 This burly Protectobot makes for an equally burly arm. 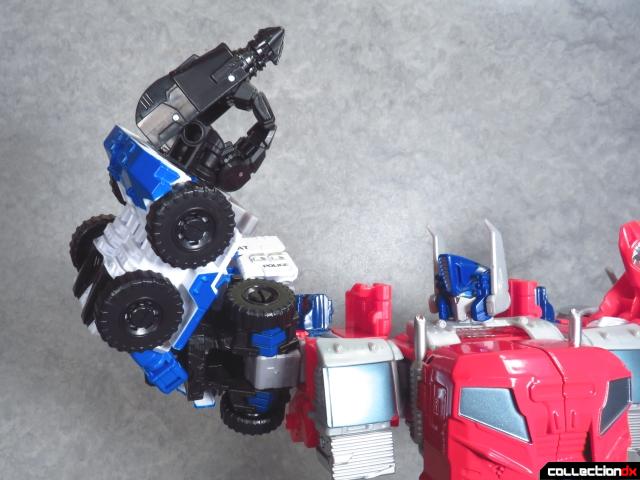 And he retains a full range of articulation despite his blockiness. 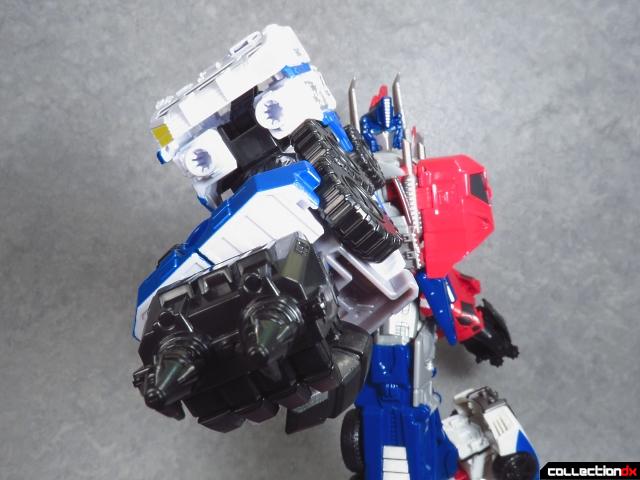 I also really like the fact that Rook's own knuckle guns are still visible in arm mode. It gives whichever combiner he's a part of a little bit of extra firepower. 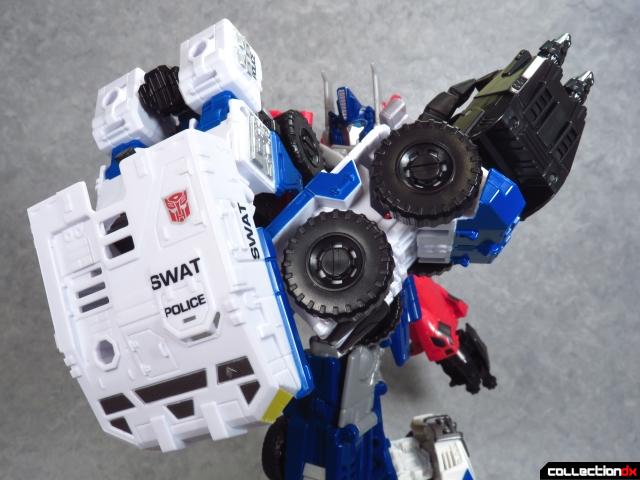 Also, the big armor chunk can be re-positioned like a shield. 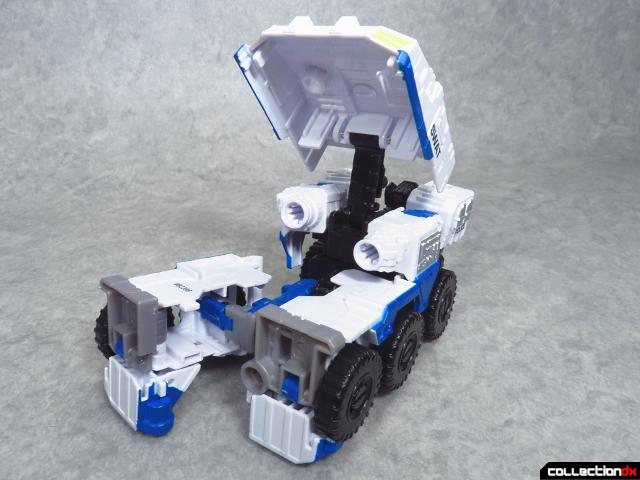 To continue into leg mode, Rook's own shins fold in via an outward swinging hinge. 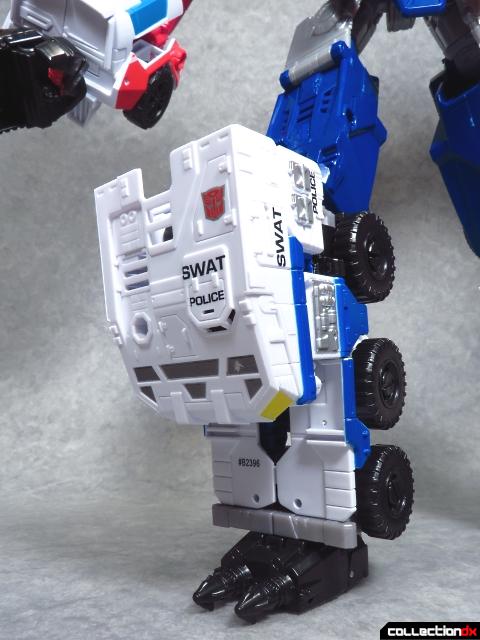 Rook's leg mode has the mother of all shin guards front and center. He feels pretty solid down there even if the actual foot is seemingly dwarfed by Rook's chunky frame. 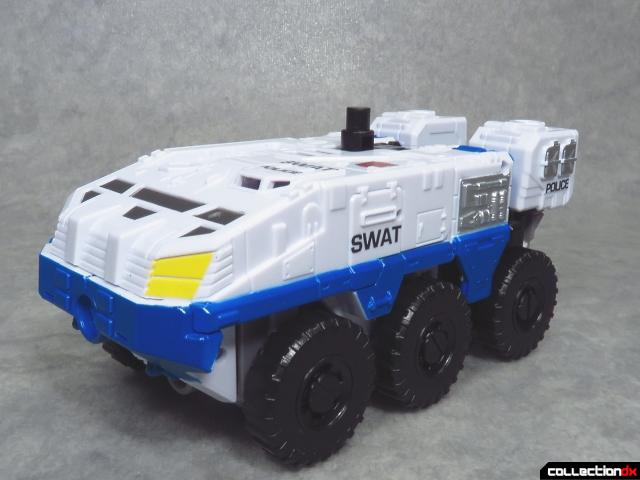 To complete APC mode, you just bring Rook's feet and armored vehicle front forward so that they tab into each other. The finished vehicle is locked together tightly and feels really solid. 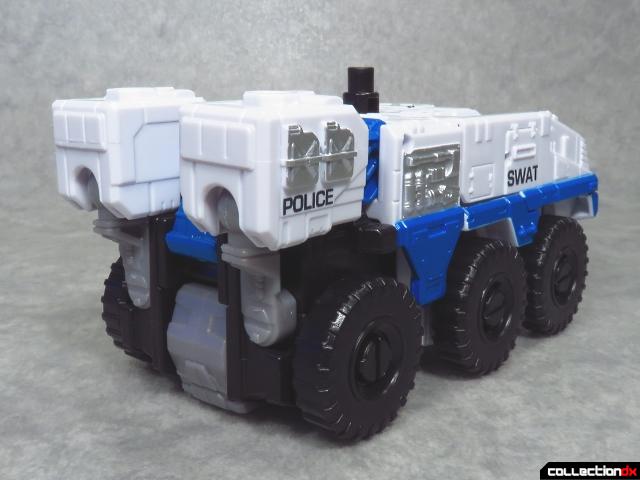 Again, the colors fit the figure and make him look like a legitimate Autobot. 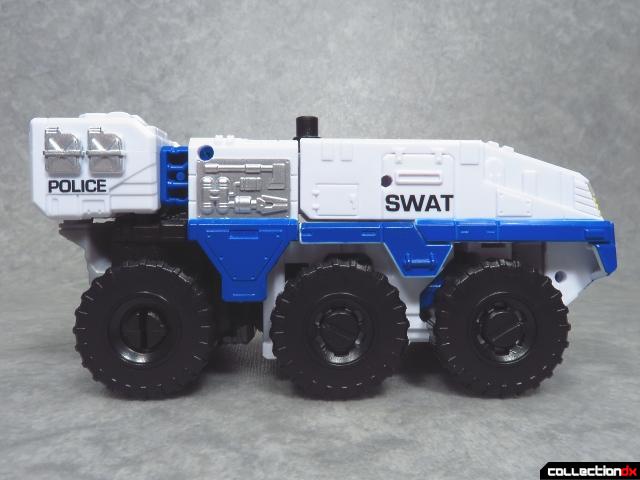 A lot of little details along Rook's sides are picked out with silver paint, and that only adds to the finish. Although, I do wish some of the paint budget had been spent on colored-in wheel hubs. 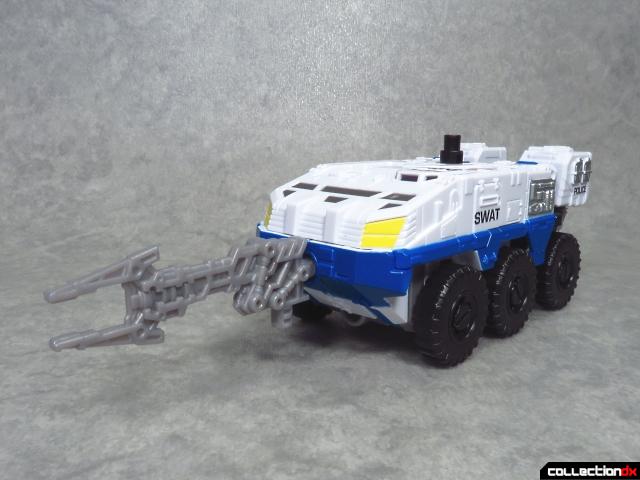 Many promo photos show the claw plugged in up top, but I think it works a lot better in the front where you can imagine Rook pulling a friend to safety or disarming a bomb. 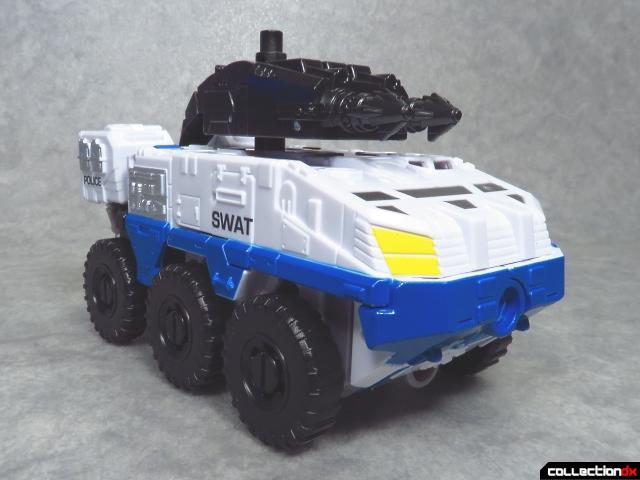 Rook's double missile launcher has an extra hole on the bottom so it can be used like a top mounted turret. They're loaded with fire extinguishing foam, honest. 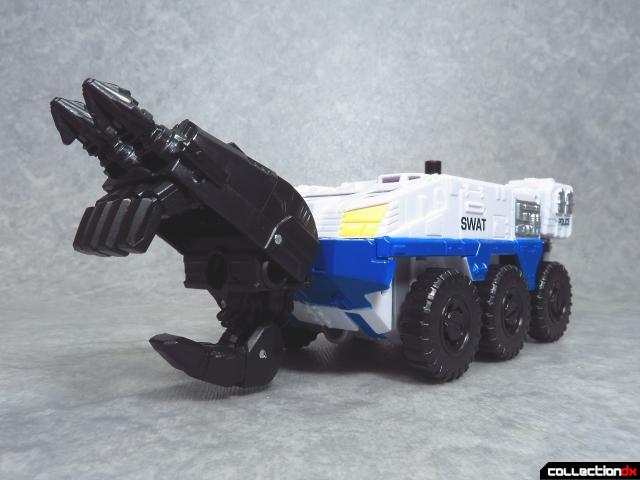 Putting the combiner part on the front turns Rook into a battering hand. 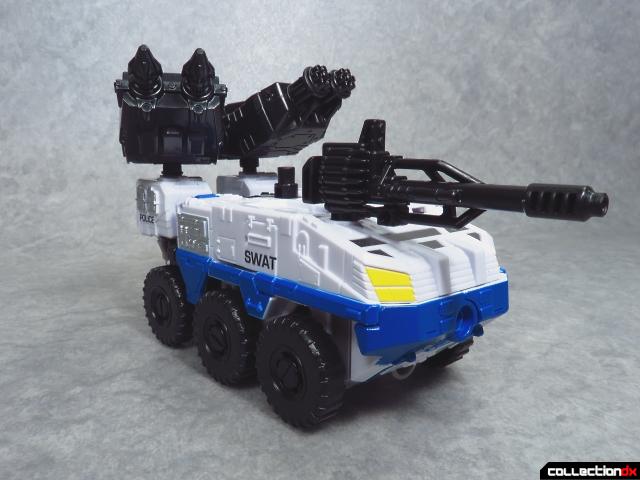 Rook has enough open ports for connecting a bunch of extra weapons. I especially like how the combiner guns still have enough room to angle up and rotate. Like this, he looks like a shoot 'em up mid-boss. 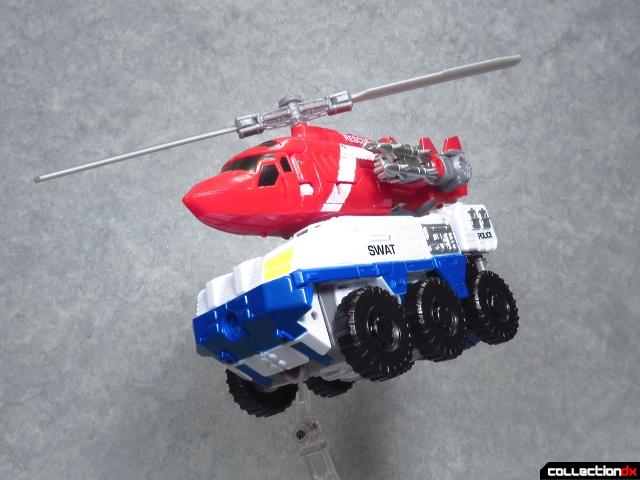 And for sheer imagination-powered play value, Rook can actually be "carried" by Blades, thanks to the peg on top. Airlift your buddies into the combat zone! 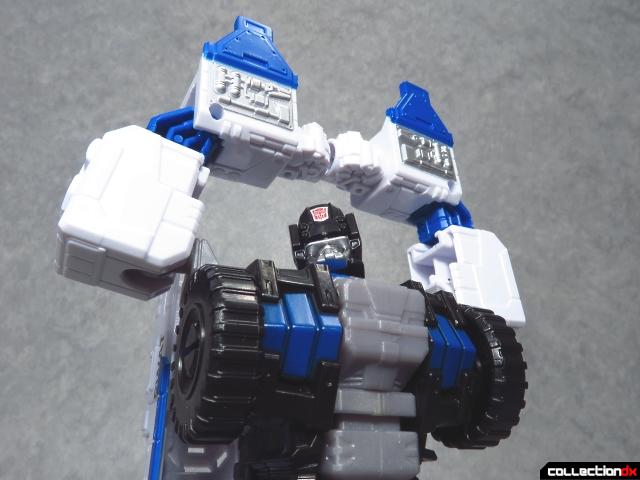 While Rook's future as part of Defensor may be uncertain, I can be sure that he's just plain cool. As the only current Protectobot limb who isn't a remold, this burly bot manages to make the strongest first impression he can. Everything about Rook in terms of articulation, gimmicks, and transformation meshes together extremely well. Now, I have to wonder if and when he'll will be remolded into another Combiner Wars toy, but if it's half a good as Rook is, then it'll be another Transformer worth picking up.

He's definitely his own character, but the head design makes me think of Captain Gridiron from G.I. Joe. Make him green and yellow, and you've got another 'Joe-themed figure to go with the Powerglide repaint.

I haven't been a Transformers collector, but got persuaded by the CW combiners. Of the limbs I've bought, this is my favorite, at least in part because it's not a re-mold of one of the other limbs. It makes me appreciate all the great design choices a little more. (And you're right about the arm-flaps.)

I like attaching a few of the other Protectobots' combiner weapons to his backpack so that he looks hilariously well-armed.

It seems like the common expectation is for Mr. Rook to be remolded into Brawl for the upcoming Combaticons. He looks like a fantastic APC, but I'm skeptical how well he'll work as a tank, particularly since his turret would presumably just be his combiner piece. I guess we'll see soon enough.

That one pic of Blades carrying Rook reminds of the head vehicle from Dynaman.

Nice review, I now want him.