One of my favorite shows when I was a kid was Medabots. The idea of having personal robot friends who can shoot missiles and have laser swords and fight eachother was incredibly cool to me, and I enjoyed it greatly. There were plenty of awesome designs in the show like Arcbeetle or Warbandit, but my favorite design from the very start was the mysterious white and purple robot with blazing red eyes and giant horns known as Rokusho. Although that Medabot wasn’t in the show at first, when he appeared, oh boy did he appear. In the middle of a terrible storm, Rokusho shows up wearing a tattered cape and saves a drowning puppy. When the main characters ask who he was, all he had to say was “My name is of no importance” before vanishing.

Yeah, when I was a kid I thought that was pretty badass.

The more I watched the Medabots cartoon, the more that I found myself loving everything about Rokusho. His mysterious characteristics and striking, simplistic design made me eager to track down as many Rokusho toys as possible. Rokusho is the reason I love stag beetles so much. The striking horns and fierce attack power of this little robot has quickly become synonymous with stag beetles between other characters based on stag beetles, such as Kamen Rider Gatack and Garren.

The first one that I ever got my hands on was this tiny little bugger. 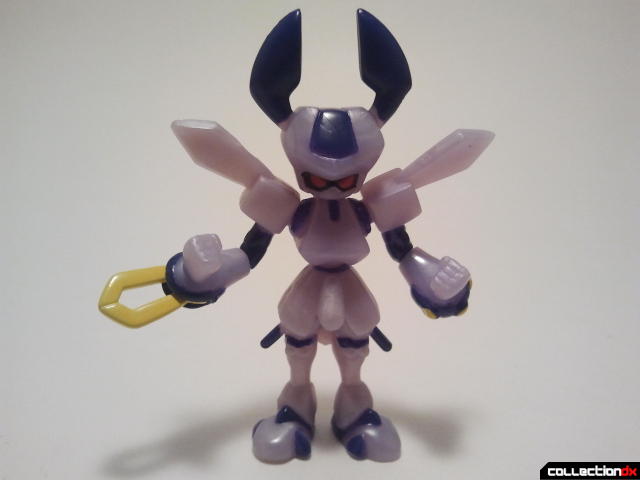 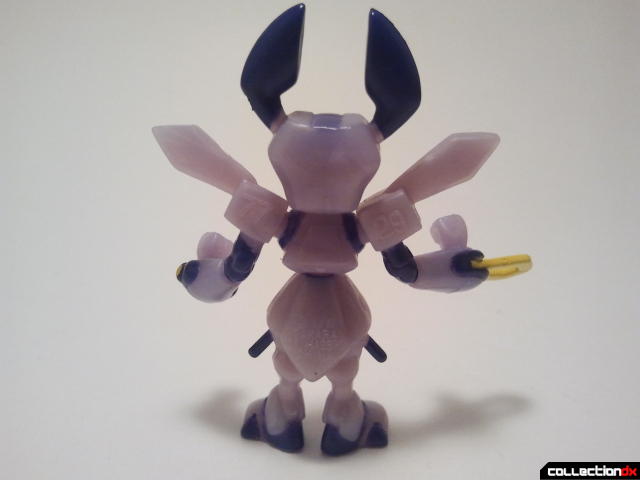 The main Medabots toyline consisted of small, roughly two inch action figures. A whole whack of these figures were released along with the cartoon. The detail on them is decent enough, but it’s a little bit of a soft sculpt. At its size though, I don’t think it’s all that bad. Rokusho looks a little bit more purple than he was in the cartoon, though. 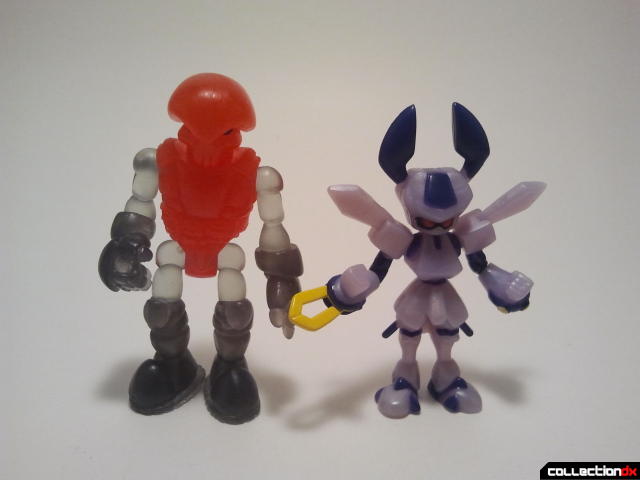 Rokusho is a pretty simple toy. The head, waist, and arms all turn on swivels, and Rokusho’s wrists rotate as well. The Medabots parts use all of the same peg size, so you can give him three heads if you really want to. 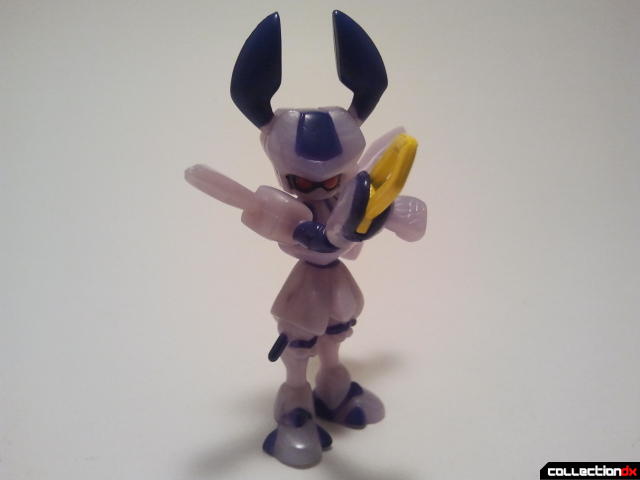 In addition to being a tiny action figure, there was also a game that they tried to push so that kids could “Robattle” against each other. The left arm, right arm, and torso all have number stats that represent how strong that part was. 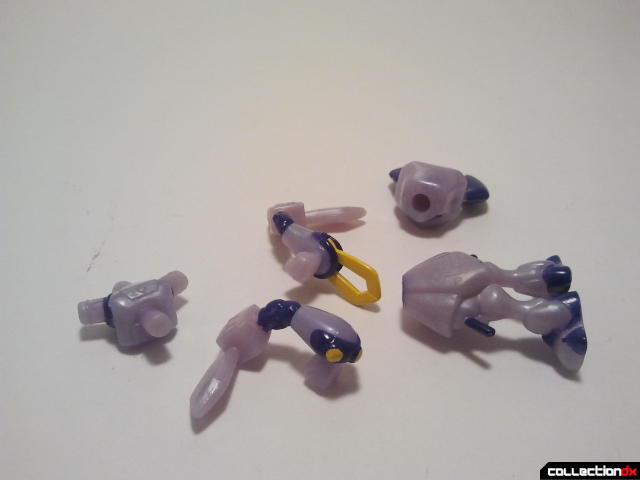 A tiny little hexagonal die was included to play the game. I do not have the die anymore because the game was dumb.

In addition to the stupid dice, each Medabot came with a little trading card with some nice art and a schematic for that character. I’m amazed that I’ve managed to hold onto this card over all of these years. 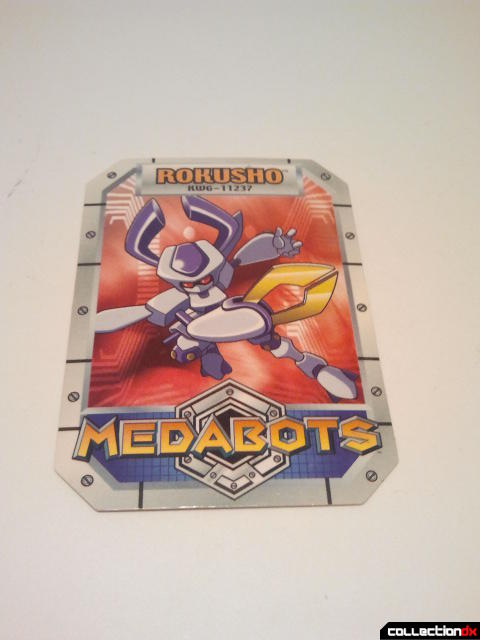 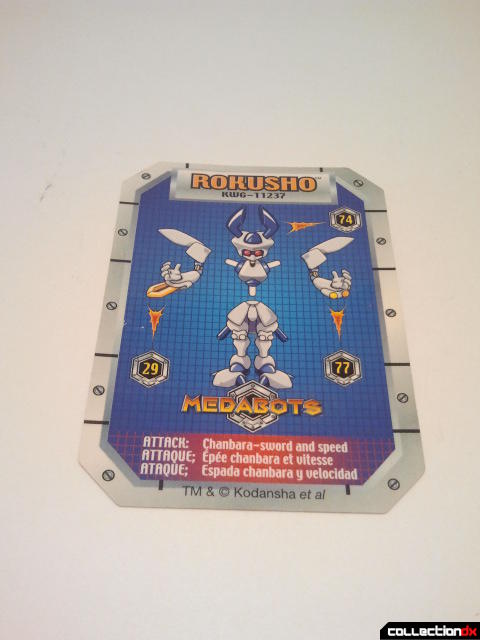 Also due to an amusing coincidence, you can do this with these Medabots. 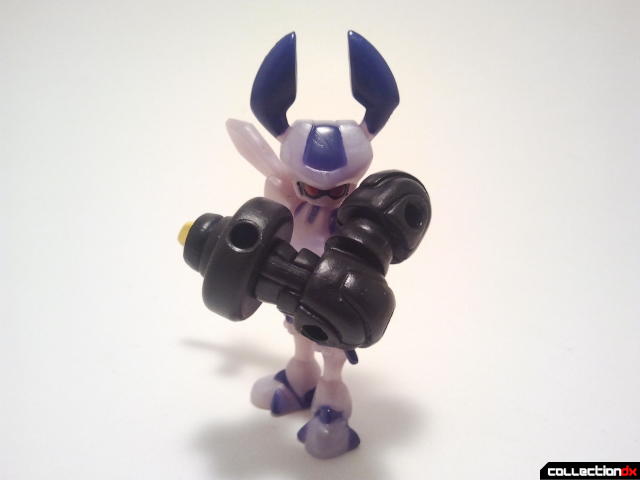 I think they’re worth it just for that.

yeah, all the 2 inch action figures had swappable limbs. can't recall if it was part of the show but definitely part of the games i've played (gba).

thanks for this review. nostalgic for me.

This review brought up some memories. Although not my favorite of the pokemon-like animes, Medabot had some really nice robots, like, as you said, Arcbeetle. Actually, Arcbeetle was my favorite of them. If someday we see a D-Arts version of it, I will surely get it.

About the review, I had the Warbandit toy. I think it was the smallest toy I ever had hahah But it was fun. I had no other Medabot to exchange parts, but I played a lot with it until I began losing parts... It's nice to see you managed to keep all of them :)

I do believe that Arcbeetle will happen. A while back at a Tamashii Nations show we got to see cardboard stands of Warbandit, Sumilidon, Arcbeetle, and oddly enough, Robo Emperor. So hopefully we will get those in the near future.

And actually, this is my second Rokusho. I actually lost my first Rokusho's sword because it popped off. I picked up this one at half off the original price when Medabots was ending its airing, haha.

Wait, what about the ones that everyone actually wants!? Like you know, Brass? Or Pepper Cat?

I have this same toy! Rokusho was definitely a badass. And the show was underrated fun. I forget his name, but my favorite was the sad-sack medabot who was a dog type (I think), but his owner had a cat-type medallion in him, which meant he couldn't fight well. I picked up a great cel of him with his owner. I've actually got a bunch of really nice cels from this show. They could be had for cheap years ago. :-)

Yeah, you're thinking of Cyandog, who later got upgraded to Krosserdog. That's a neat design that totally had a Gundam face.

You should take pictures of those cels man! I'd love to see them.

Yes, Cyandog! Thank you. That's him. The combination of Gundam face with a hanging "tongue" is what sold me on him, plus his sad story. I specifically looked for cels relating to him.

Just for fun, you can see the exact image from my cel of The Ankle Bites at 6:50 here:
http://youtu.be/fgBMJdk7rjE?t=6m49s

Dude, those are fantastic. Awesome collection of cels!

And yeah, the Ankle Biters were a serious sort of nightmare fuel. That episode made me realize you should never make fun of Medabots with gravity powers.