This is a review of the “Micromaster” version of Transformers Generation 1 Fortress Maximus. The reason why I put Micromaster in quotes is because it's not an official Hasbro/Takara release. It's from the “Quick Change” line. The back of the packaging it shows other figures available such as two Technobots (Strafe and Lightspeed), two Terrorcons (Cutthroat and Rippersnapper), several minicons, and over sized World's Smallest Transformers (WST) versions of G1 Prowl and G1 Sideswipe. For the rest of this review, the Micromaster Fortress Maximus will be known as “Mini Fort Max” and the full sized one will be called by the full name to avoid any confusion. 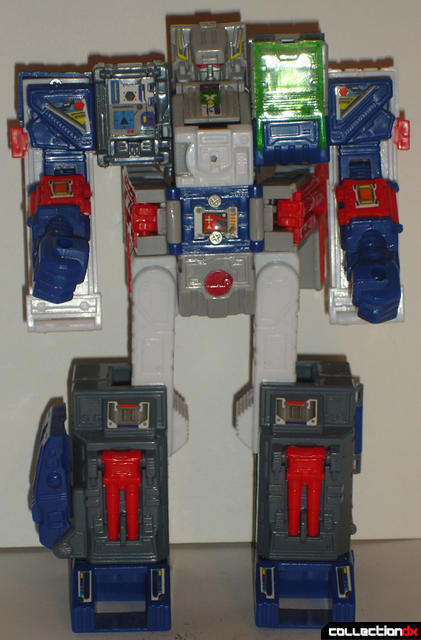 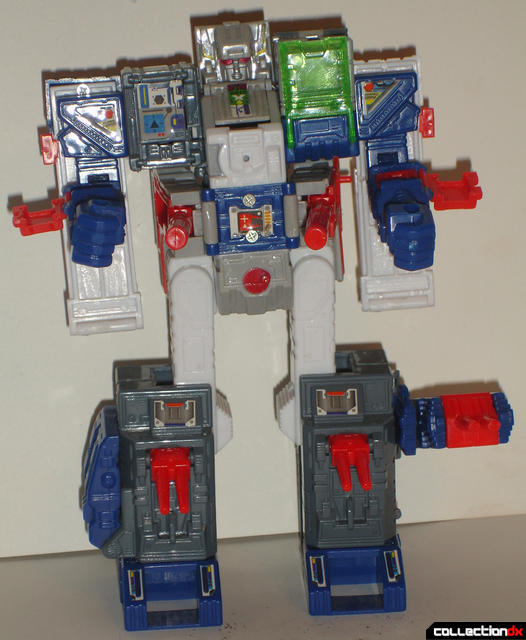 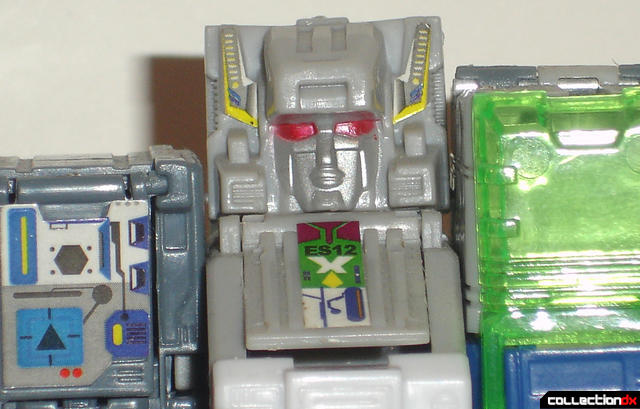 Since he came packaged in robot mode, this is where I will start. The original Fortress Maximus was about two and a half feet tall in robot mode and I'm quite amazed at how they shrunk him down to less than a foot tall. All of his little details are still somewhat sharp and visible. I like how some of the details are due to very decorative stickers that gives the figure some personality and doesn't make it look so bland, a big plus in my opinion. Mini Fort Max stands about six inches tall and has ten points of articulation in his hands, elbows, legs, and feet. Of course, some of that articulation is due to his transformation. Plastic quality is really good for a Knock Off (KO) and it feels sturdy, with some nice weight. 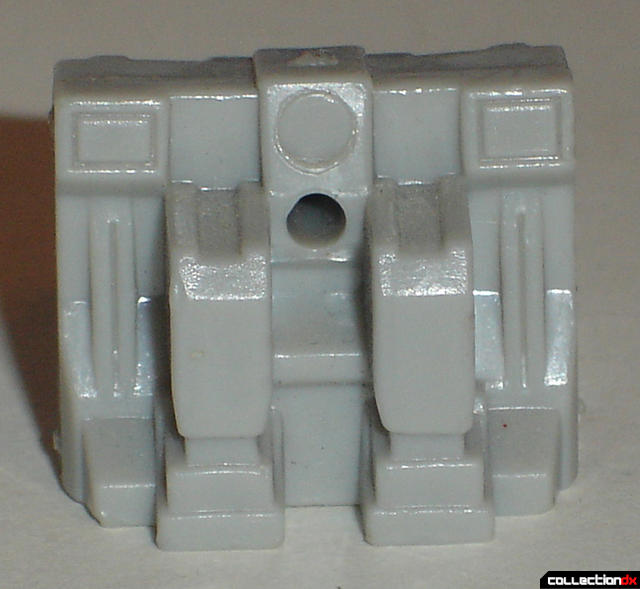 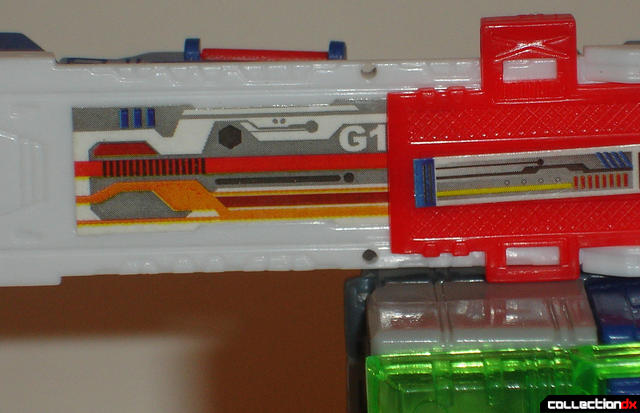 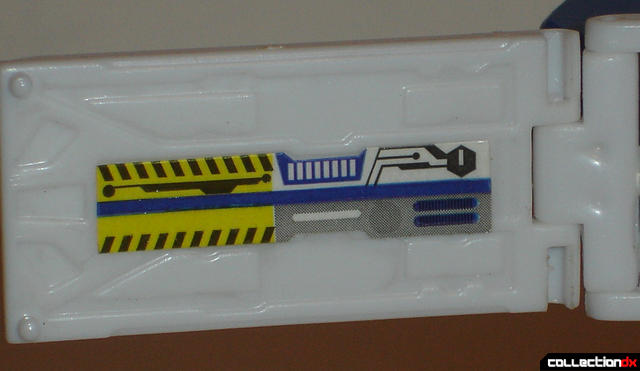 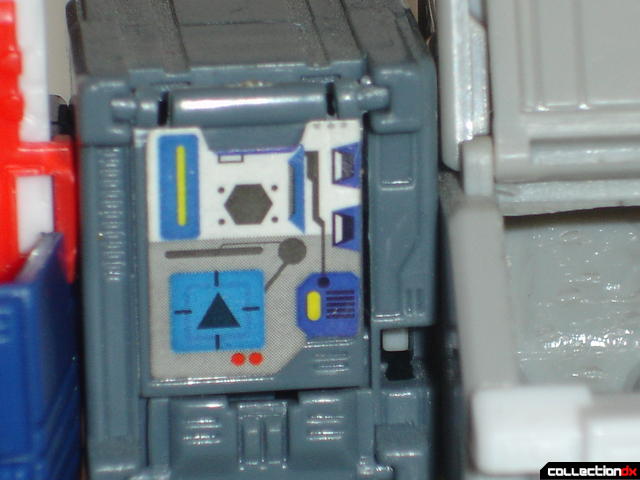 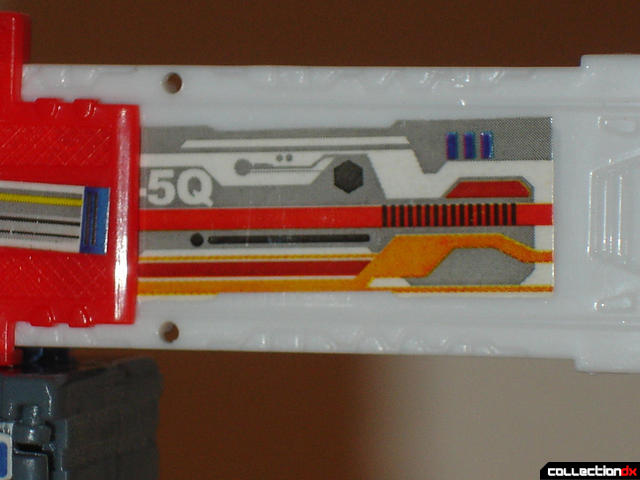 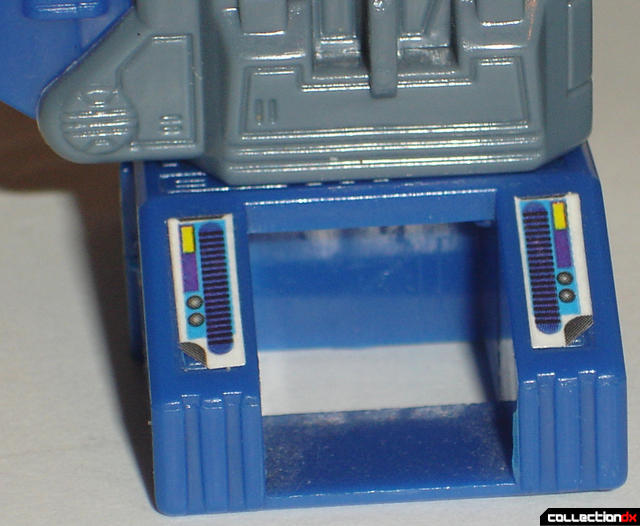 I've had this guy for over a year and none of the stickers show signs of peeling off yet, which is very surprising. He comes with none of the accessories the larger version did except for the two heads, neither of which are transformable. 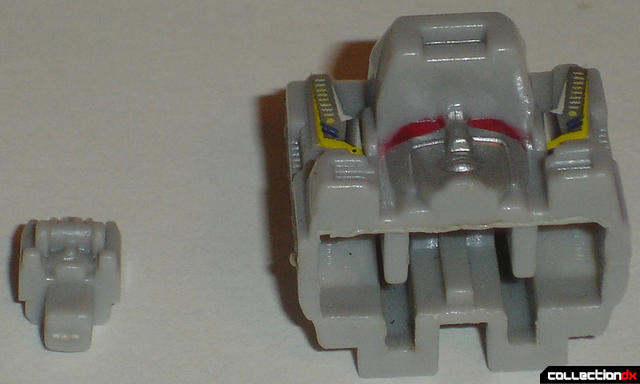 The “Spike” head plugs into the body while the “Cerebros” head slides over it. Just like the large version, Mini Fort Max has a total of six weapons attached to his body. Seven if you include the double-barreled gun that flips up from the heli-pad. The first two are hidden underneath panels on his arms. Unlike the larger version, these are just molded detail so therefore they do not flip up. The next pair are long cannons that deploy from either side of his body, and the last two are double-barreled cannons that flip up from his legs. The larger version has double-barreled guns that flip up from his hands, but unfortunately they are omitted from this version. Since I don't own the larger version and this figure is already filled with detail I can easily overlook this.

Another function that was omitted in this version was an elevator. All one had to do to activate the elevator on the fullsized Fortress Maximus was turn the red dial located on his “trunk” area (for lack of a better word).

To transform Mini Fort Max into his battle station mode remove both of the heads, flip up the ramp located on his back, flip out the red extension piece on the ramp, flip the arms up, position the hands down, extend the ramps behind the arms, flip the feet down, rotate the heli-pad around and flip the double-barreled gun up (located behind the left leg), lift the tower halves up and press them together, lay the figure down, flip up the leg guns up, and Mini Fort Max is now in his Battle Station mode! There is a hole on the side of the tower where one of his laser guns is supposed to attach to, but he doesn't come with one. 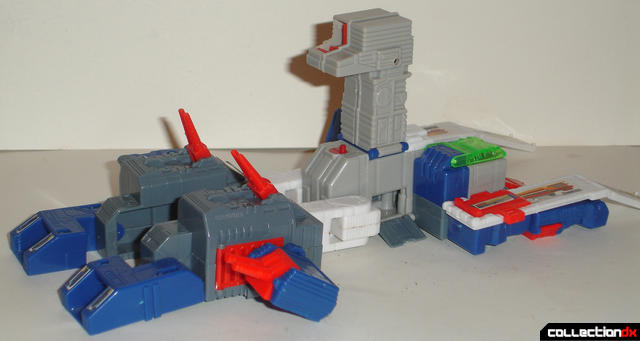 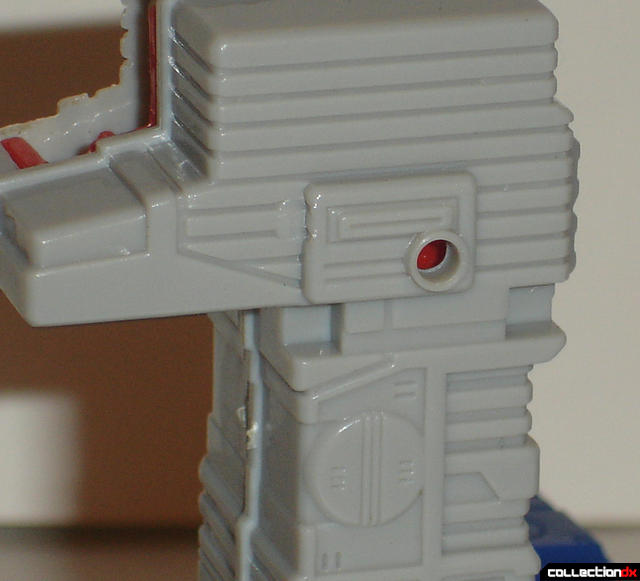 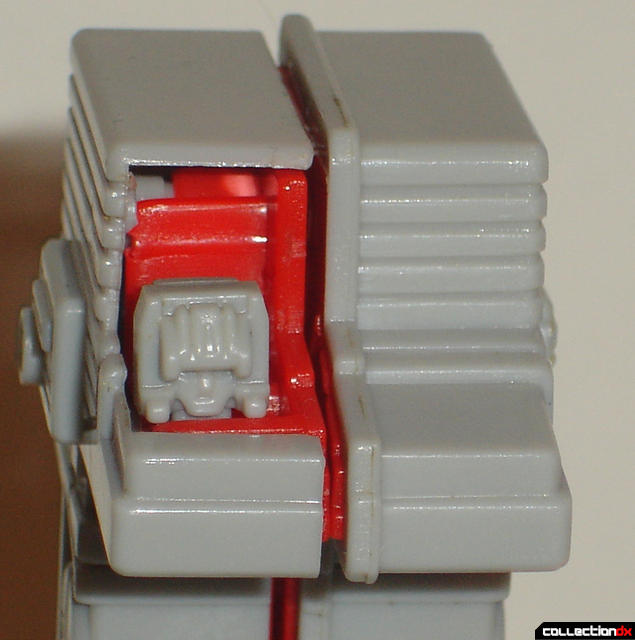 I think it's nice that the designers left the hole there since that leaves some room for customization. In the Japanese Headmasters show the majority of the time we either see Fortress Maximus in this mode or his city mode. The larger body acts as a base for the Autobots (Cybertrons).

Transforming Mini Fort Max from Battle Station to City mode is very simple. Just flip up the feet, fold the legs up to the body and position them upwards (on mine I have trouble with one of the legs), fold the heli-pad behind the leg, and flip down the red panel. 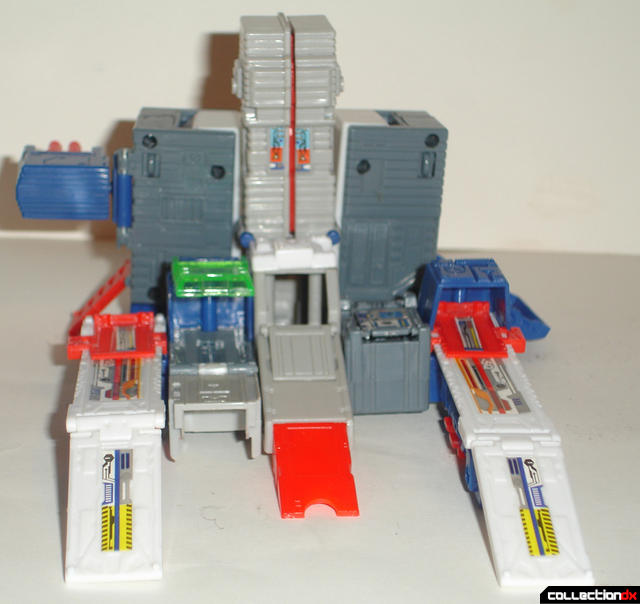 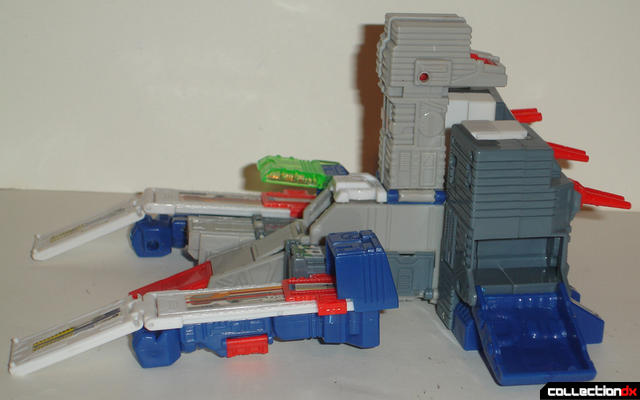 I heard on the original Fortress Maximus the red panel opened up to reveal a “jail.” Basically, city mode is the same as battle station mode except the legs are folded up. If I’m not mistaken, I do believe in the last episode of the original G1 cartoon, Fortress Maximus was flying through space in this mode. Even though this Fortress Maximus is vastly smaller than the original, this doesn't hinder his functionality with other figures at all. If he's too small to use as a base, maybe he can be used as a battle platform similar to how the Scramble City leaders were with their smaller members. Micromasters are the perfect size for this. Or, perhaps, if you're the pacifist type, maybe you could use Mini Fort Max's city mode as somewhat of a repair bay. 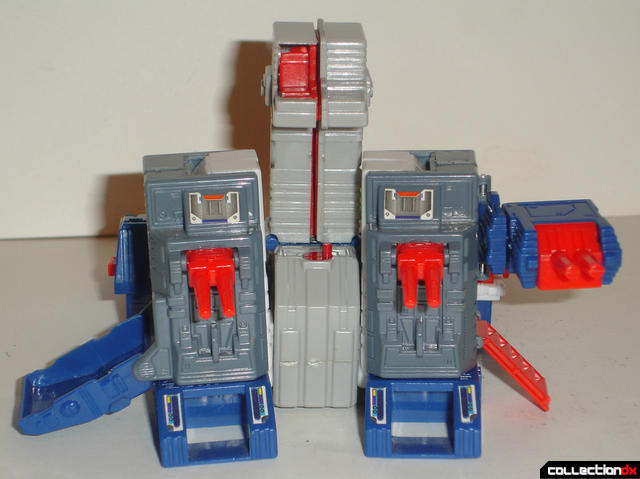 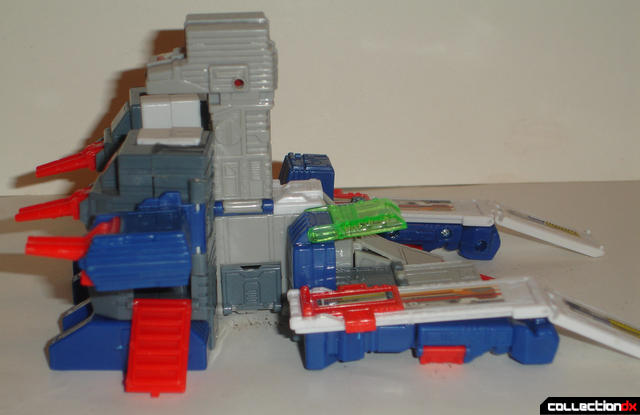 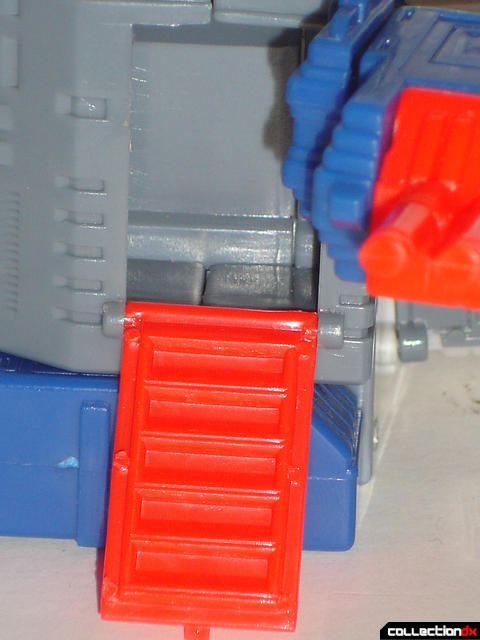 I think Mini Fort Max is one of the best knock-offs that I own. He's sturdy, made of really good quality plastic, no stickers are peeling off, he has good detail for his size, and he captures the image of the full sized Fortress Maximus perfectly.

Like I said earlier, even though several things have been changed/omitted, it doesn't bother me at all. I'm just happy that I have some version of Fortress Maximus in my collection that didn't cost me an arm or a leg. If you already have the original Fortress Maximus or the reissue, you might pass this over, but if you don't I highly recommend you pick this guy up. He’ll make a neat little addition to your collection especially if you're starting out.

It would be really nice if we could get a full size one some day. I've seen that a KO G1 Scorponok has been released so maybe...

The original Fort Max is not 2 and a half feet tall. He's not even 2 feet tall. A couple inches of short of two feet, in fact.

I guess that comes from years of me reading about how people are always over-exaggerating his height. Even though he was the largest Transformer during that time. Lol.

I have to say I was far more impressed with it then I ever imagined I would be. While I wouldn't exactly say "sturdy, made of really good quality plastic" it is definitely worth checking out if you can.

To the best of my knowledge, I believe this is the second version of a KO Fort Max in existence. I've seen somewhere that there is yet a slightly smaller version of this one. The first version was known as "Uranus 5 change" and from what I've read (and also seen) the quality really pales in comparison to this version. You could look at a picture of that thing and it would still fall apart. As for the so-called "5 modes" it has, 2 of those are just the figure in mid-transformation.

Hmmm....it's possible, or it could just be a brand new mold. Btw, I love the Choujin Element Man profile pic!

Why didn't you call him "Fortress Minimus"?