After a 35 year absence, the Mego Corporation has made it's return to the world of retail toys with an all new assortment of characters released in the same style that made the company famous back in the early 1970s. Among the characters that have been released is this set of two figures of the Mirror Universe versions of both Captain Kirk and Mr. Spock, from the season 2 episode of Star Trek entitled "Mirror, Mirror". In the episode, a transporter mishap transports an away team to an alternate universe where the Federation is now an evil Empire. The Kirk represented here is impersonating a member of the evil Terran Empire but Spock actually is from that alternate universe and as such should be regarded as a villain character.

This set comes to use courtesy of the Mego Corporation.

The figures come packaged together in a box with a clear plastic window on the front. Images of the characters and the iconic Enterprise starship separate the two characters. The figures are attached to a cardboard backdrop representing the transporter room. 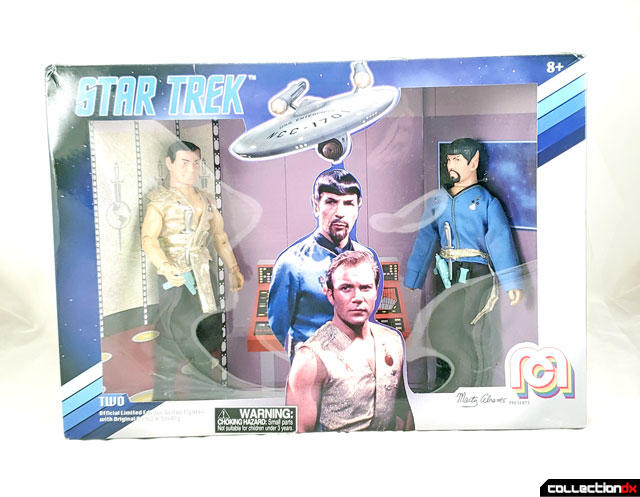 I like that presentation from a visual perspective but unfortunately, I feel like they really dropped the ball by making the box an awkward, triangular shape. I'm not sure why the decision to deviate from a traditional square or rectungular box was made but I think it's a msstep. It makes the box more difficult to display or even store. 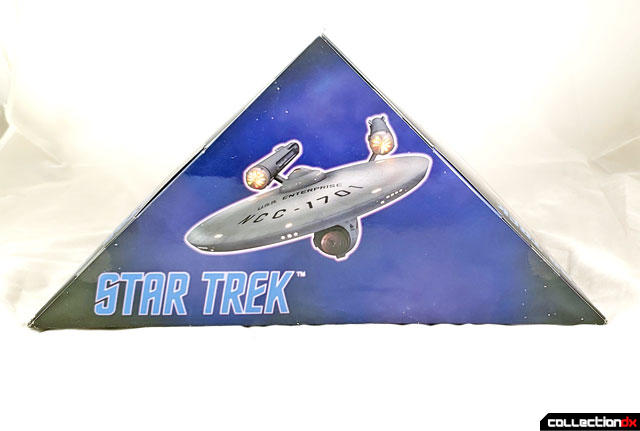 One of the remaining sides of the box shows an image from the episode as well as a short synopsis. 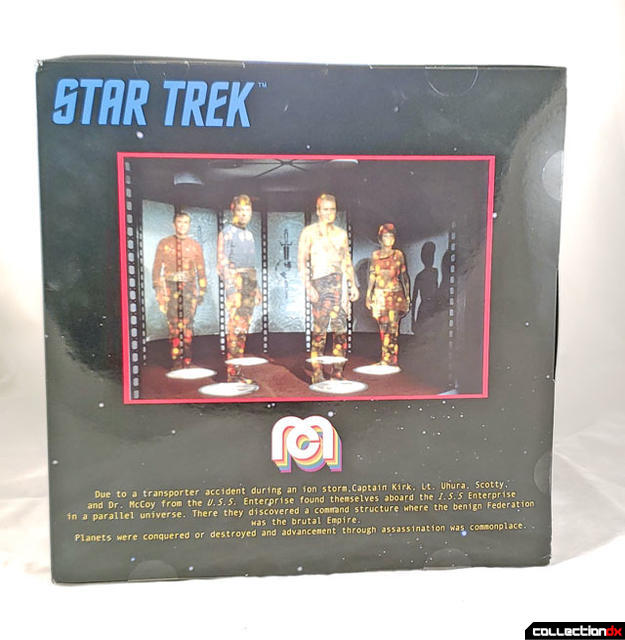 The other side is more about the toy and the company, although there is also a little trivia about the episode as well. It should be noted that the box claims that each release is "numbered for collectibility" however no such number is to be found on the example they sent us. So I am not sure what to make of that. Furthermore there have been reports of other figures found in the wild that share the same number so I wouldn't put too much stock in these being especially limited. 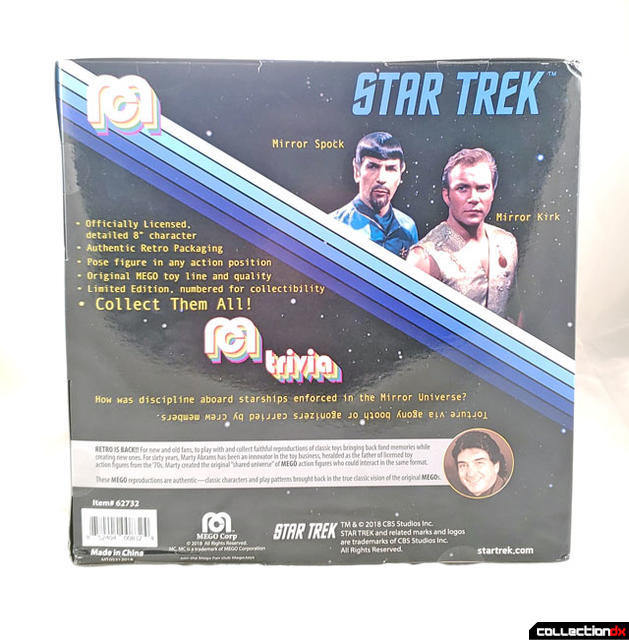 The box is meant to be opened from the top and when you look in, you can see that there is an open space on the back behind the cardboard transporter room. Within this space, you will find a Mego Fan Club offer card, as well as 3 cards each featuring an image of the Enterprise orbiting a planet. I think the Fan Club idea is cool in a retro sort of way so I'm on board with that, but I don't really know the point of the 3 cards. They are nice and glossy on one side but bare on the other and too large to fit in a trading card binder. Frankly, I think if nothing was included, I wouldn't have thought twice about it but since they are there, they just make me wish they had included actual trading cards of the characters. 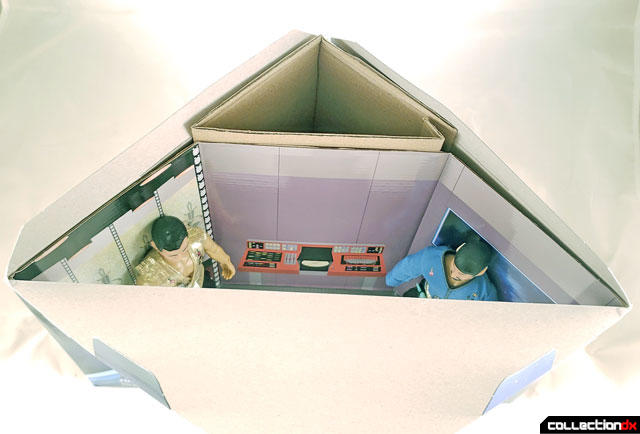 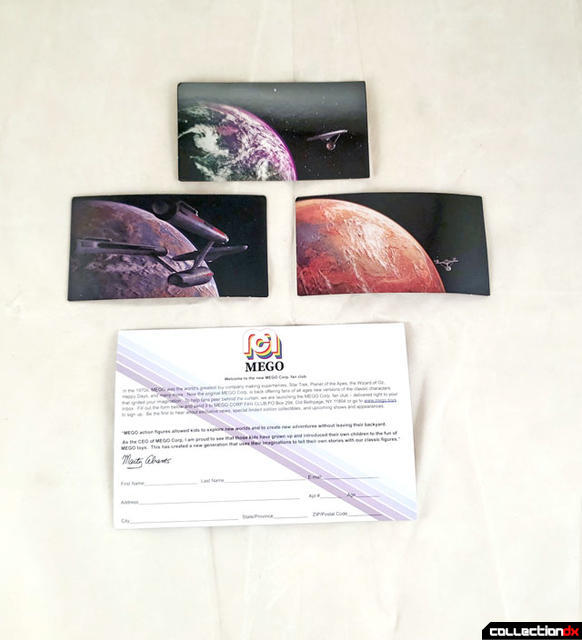 Here's a better look at the figures as they appear next to the transporter room background. I like that the background isn't directly from the show, and looks more like something that might have been part of a playset back in the '70s. On the other hand, who are we kidding here? The original set also looked like something that might have been a playset in the '70s. 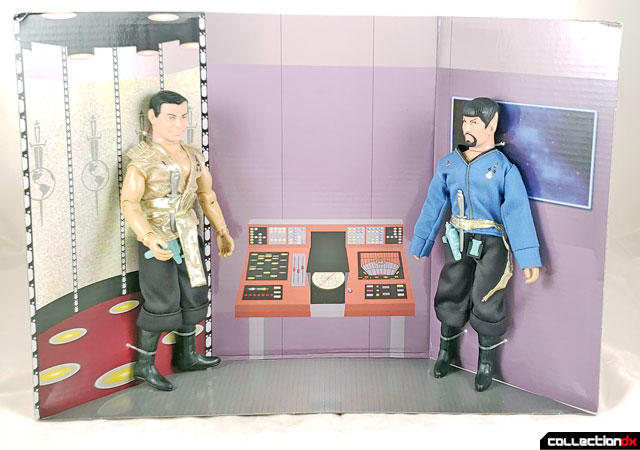 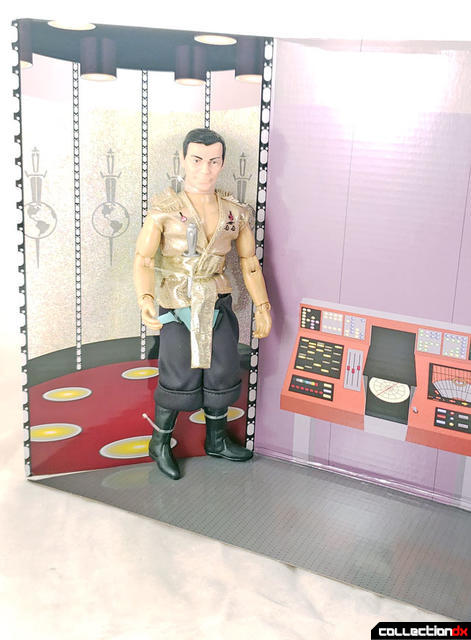 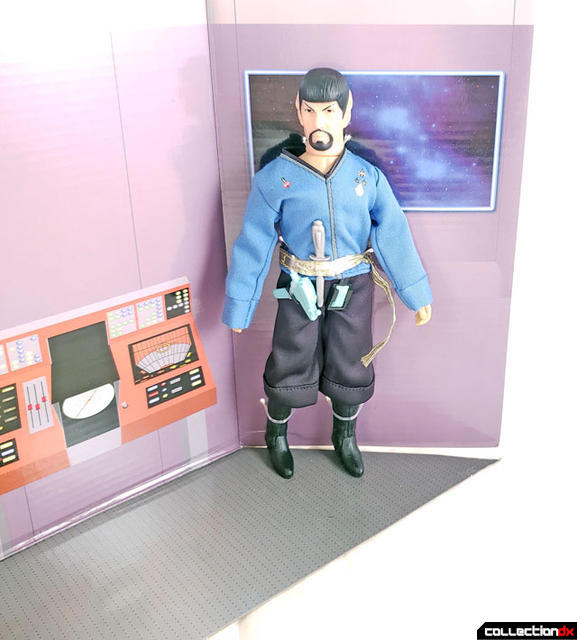 Here's how the figures look on their own. Note that they do not come with stands. I just used some from my existing collection. 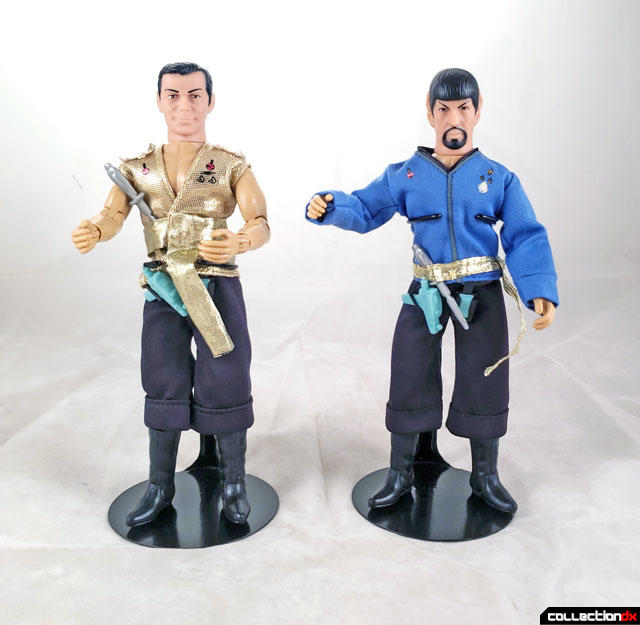 Both figures looks excellent and are mostly true to the onscreen appearance of the characters. The only minor quibble one might have is that Captain Kirk's sash ought to hang more to the right rather than right down the front of his legs. Spock's is almost correct but just a bit off. But if that sort of thing bothers you, you should probably be buying Hot Toys instead of Megos. These are meant to recapture the feeling of 1970s toys, not be exact replicas of their onscreen counterparts.

Captain Kirk's face sculpt is fine and definitely does a great job of having sly look on his face. 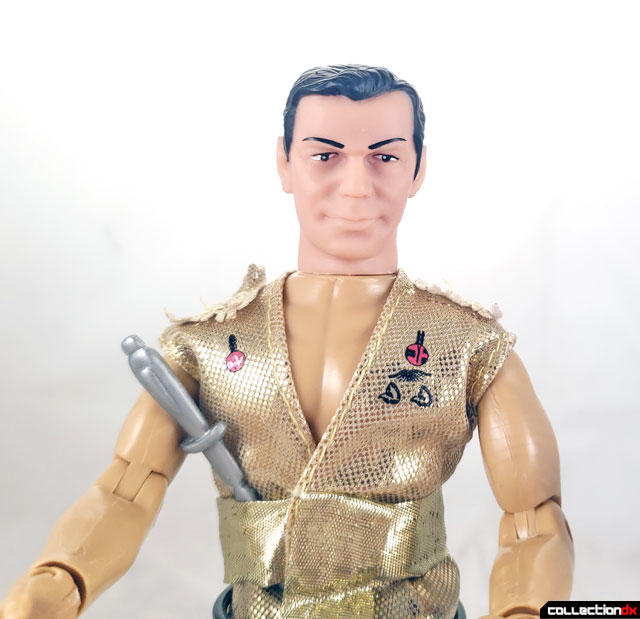 I should point out that in the picture above, the color of the skin on the head and the body look more different than they do in person. They do not match perfectly due to the different materials used (plastic for the bodies and a softer vinyl for the heads) but under normal lighting, it's not very noticeable, unlike this toy.

It's even less noticeable on the Spock figure since that one has more clothes on so it doesn't draw attention to his skin. And I like the sculpt on Spock's face even better than that of Captain Kirk. Of course, being a non-human character, I just find him to be more interesting to begin with. 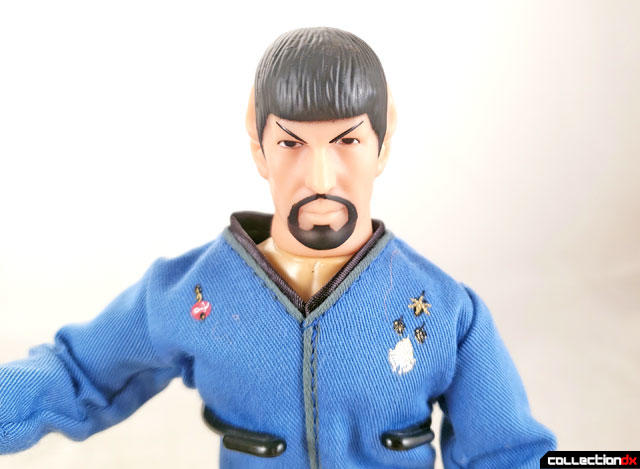 Both characters come with the same accessories, those being a phaser, a tricorder and a short sword. 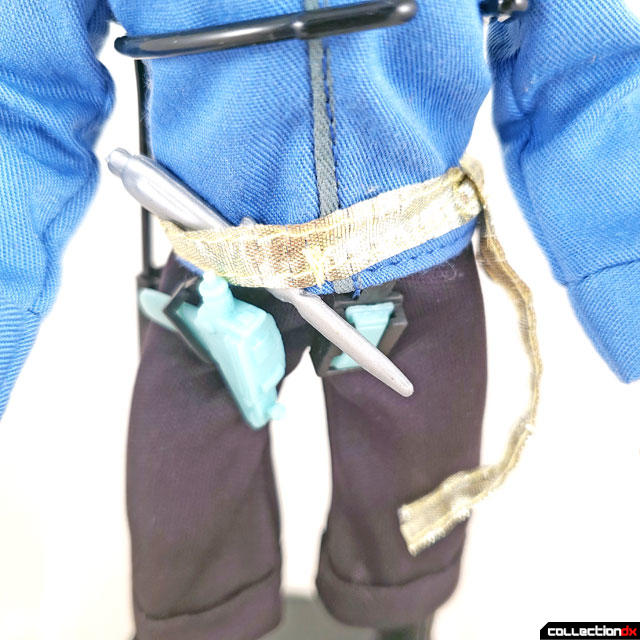 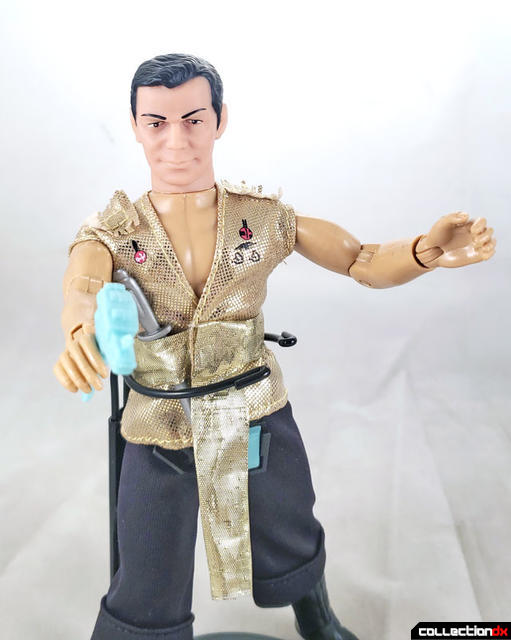 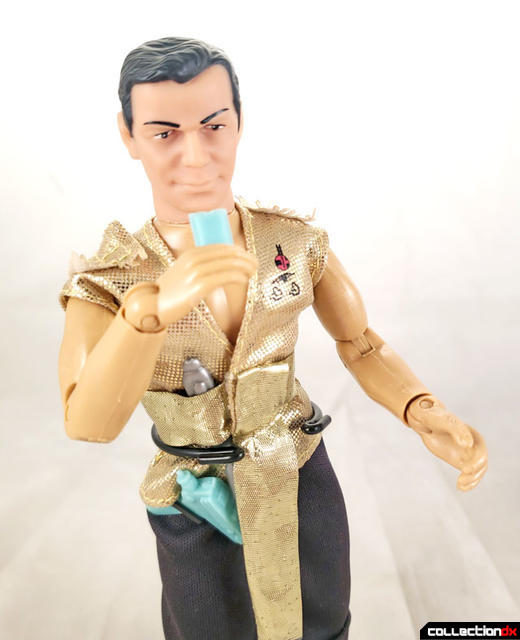 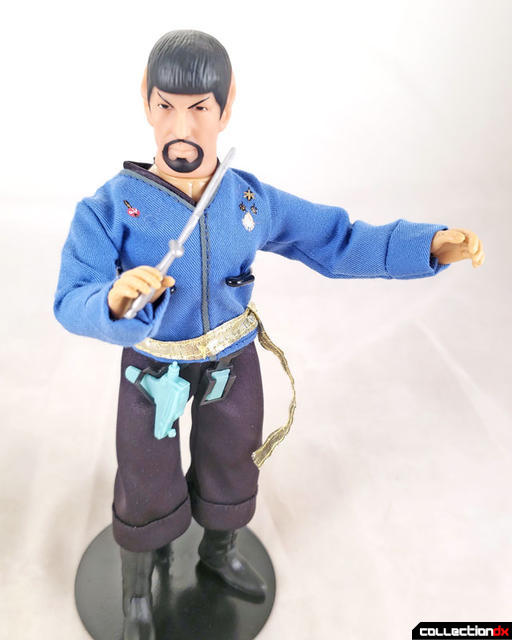 Both figures come with classic Mego style cloth garments that are sealed via velcro on the back. However, it should be pointed out that now the boots are molded directly onto the feet, unlike the old toys that often had removable footwear (even though apparently the original Star Trek figures did not.). As a result, there is no articulation in the ankles but all the other joints that you would expect to find on a Mego figure are present. 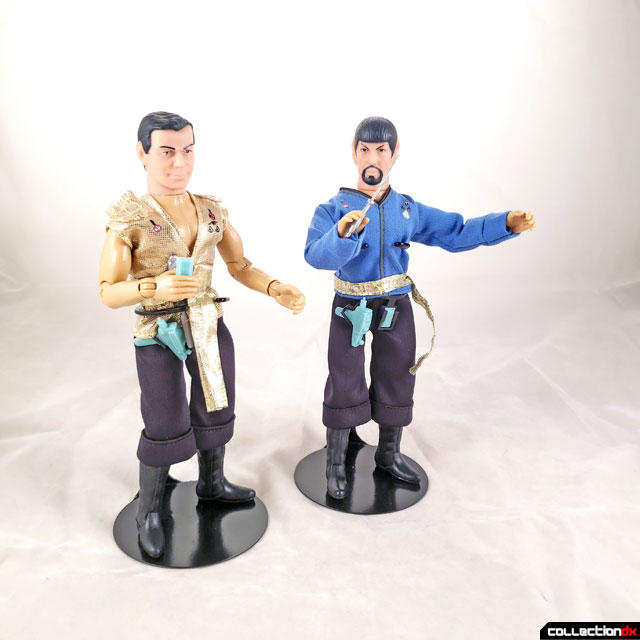 So for me, this release is a bit of a mixed bag. I have some minor issues with the packaging and supplemental stuff but if you focus just on the figures themselves, as either a Star Trek or a Mego fan, I think you would be extremely happy to have these in your collection. They are currently available exclusively at Target, along with others in the Mego line.

The cards are a rather odd addition - but they also remind me of the old Mego bridge playset that had swappable cards for the viewscreen. Add-ons for a future release, perhaps?