Star Wars toys have always been focused squarely on 3 3/4 inch action figures, even since the days of Kenner. Well, Hasbro decided to shake things up by releasing 6 inch figures in their new collector focused retail line called The Black Series. It's called the Black Series because the box they come in is black. Good job, Hasbro. You win this round. I should probably mention that there is also a line of 3 3/4 inch action figures using the Black Series name, but no one cares about those.

The first figure in this line up is Luke Skywalker in his X-Wing Flight Suit! This is how he appeared at the end of the original film when he blew up the Death Star.

If you'd like to see this guy in motion, please check out the video review below!

Now that that's out of the way, let's take a look at the figure itself. The first thing I noticed was that it was a striking resemblance to Mark Hamill. 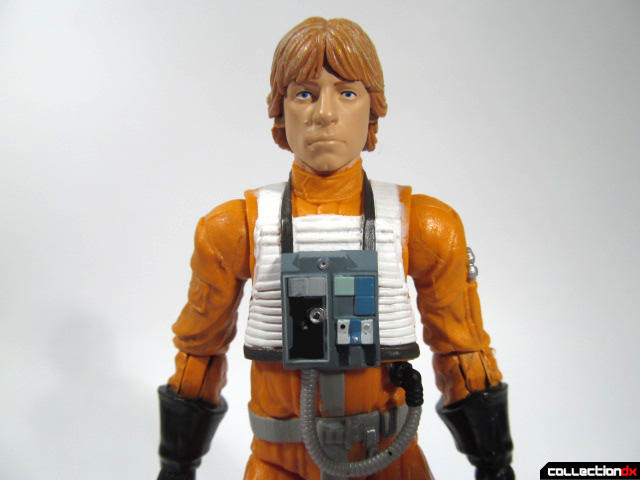 They even added the mole on the side of his face. There is a great attention to detail on the sculpt here! 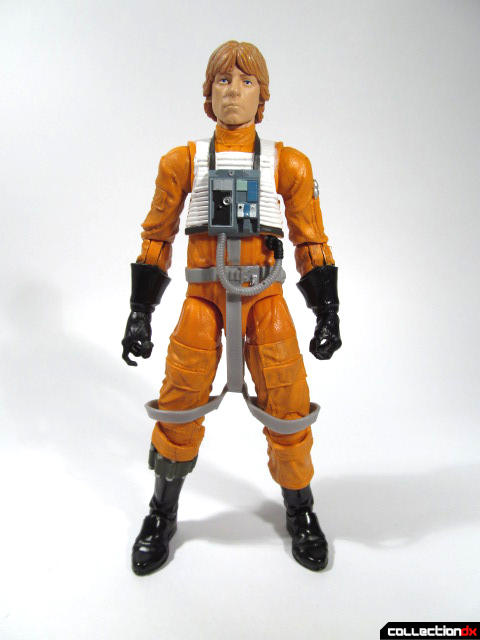 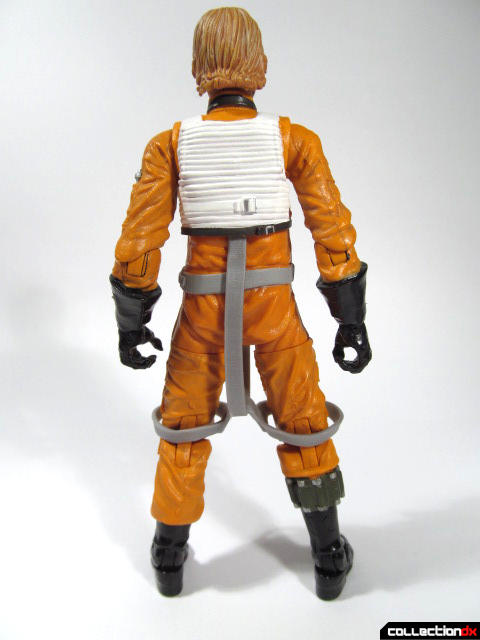 The suit and buttons are sculpted and painted really well. I'm glad they didn't just leave the orange plastic bare. They added speckles of black shading around everything so it brings out a lot of the details. There is a bit of white overspray on the shoulders, though. It's not enought to make me angry, but it is a small blemish on an otherwise beautiful toy. 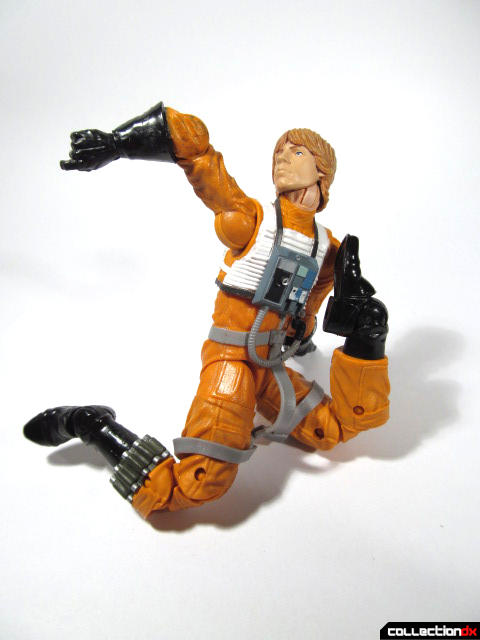 The articulation is really nice, too. Hasbro takes several queues from their Marvel Legends series here. There is a ball-jointed neck with a swivel attached, a ball-jointed chest, ball-swivel shoulders, ball-swivel elbows, wrist swivels, a nice T-joint for the hips, thigh swivels, DOUBLE-JOINTED KNEES, boot swivels, and ankle rockers. 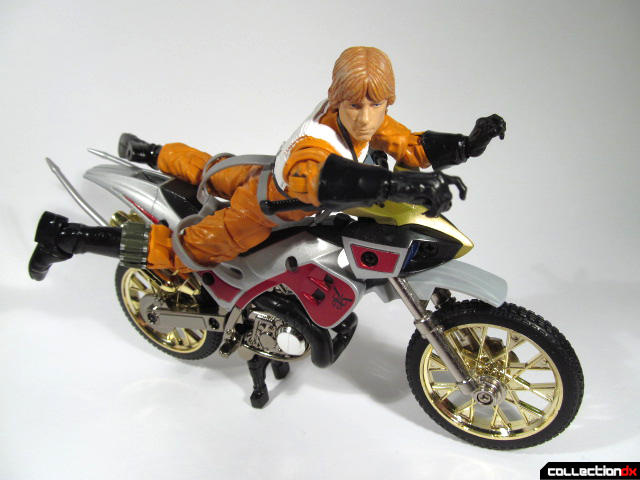 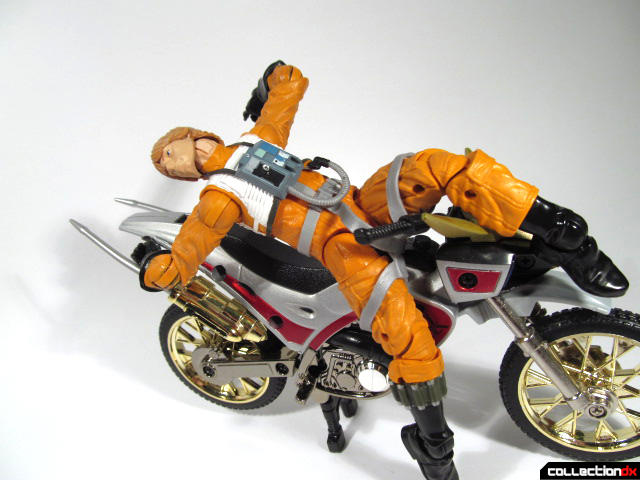 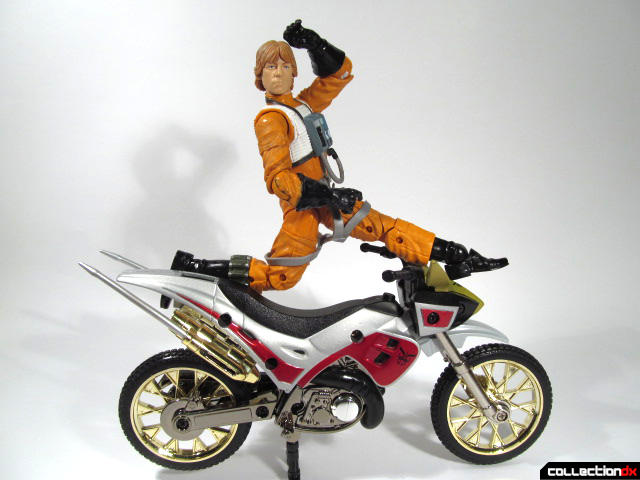 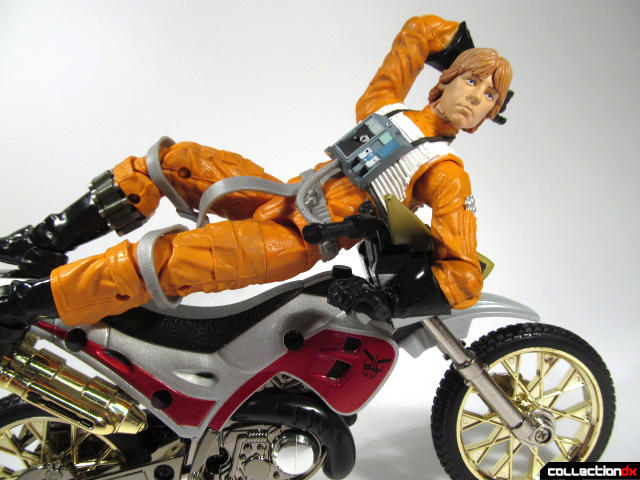 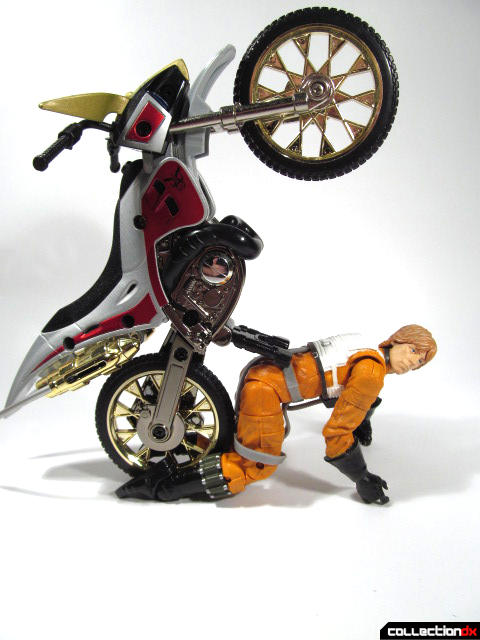 Posing this figure is a dream! The hips can be a little limited when trying to do a wide-stance pose, especially with the straps that hang down. I was also sad that they didn't add bicep swivels this toy. But, since the elbows swivel in place I can still achieve any poses I would need to. 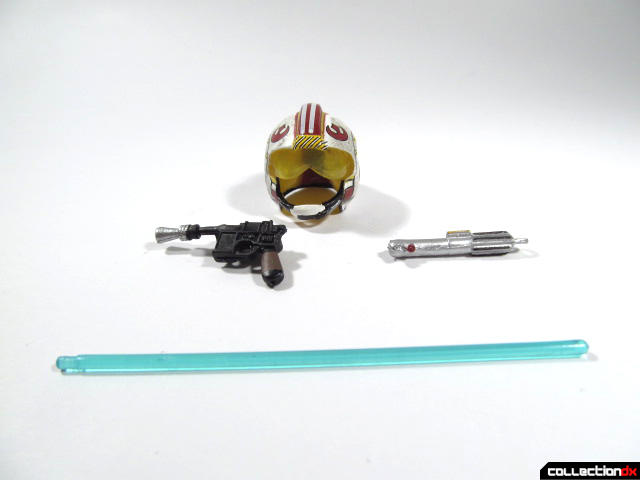 Luke comes with several accessories: his Flight Helmet, a blaster pistol, and his lightsaber. The details on the helmet are really nice, even if some of the paint apps are a little off center. 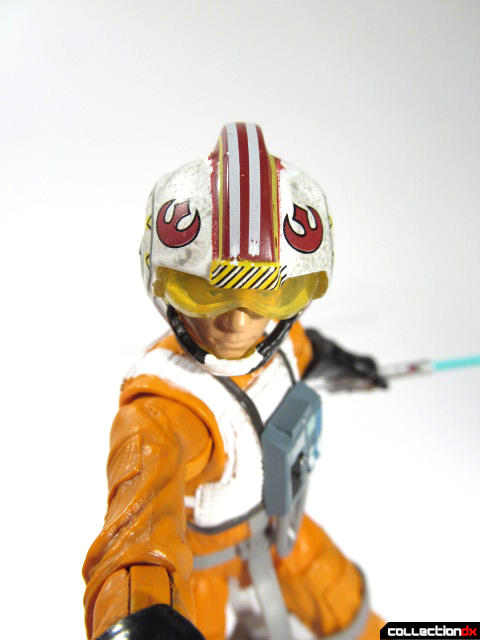 The blaster pistol doesn't have many paint apps, but the sculpt is really nice. It still looks great in Luke's hand. 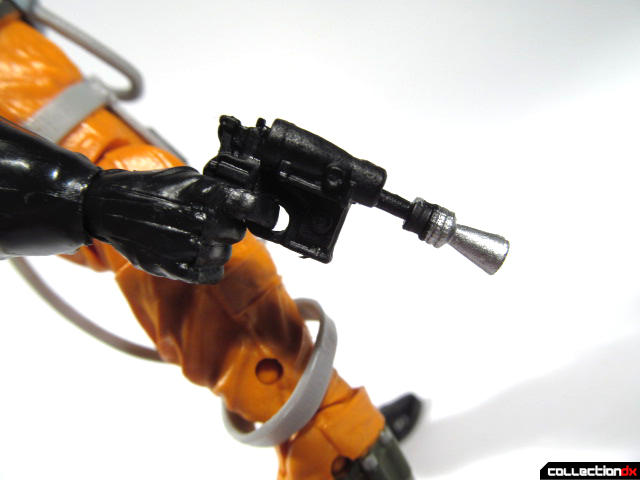 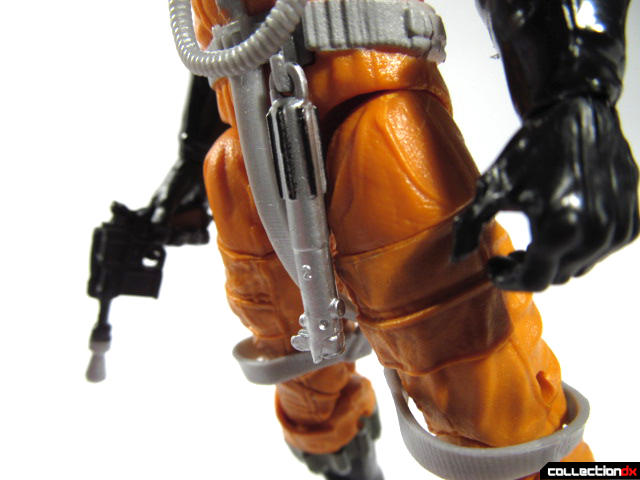 The lightsaber is done really well, There are lots of tiny details sculpted and painted on it. Plus, you can remove the blade so you can attach it to his belt. I'm a sucker for those kinds of details! 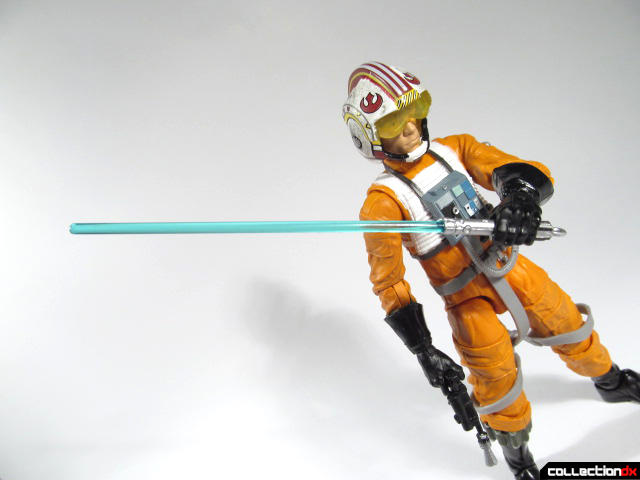 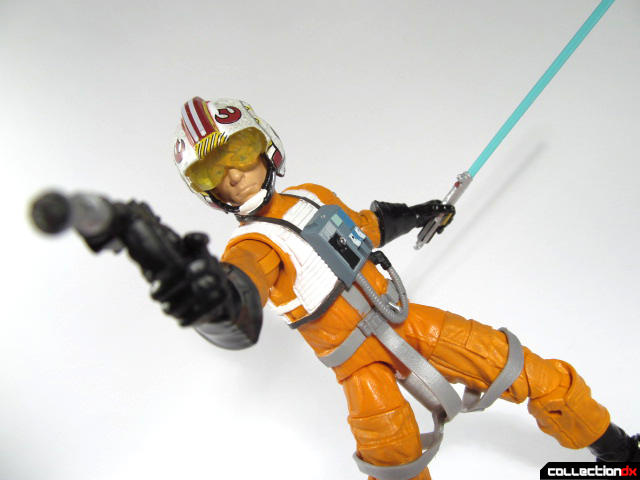 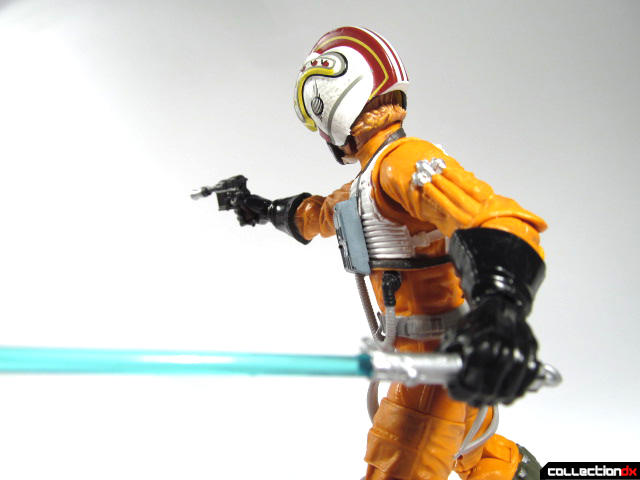 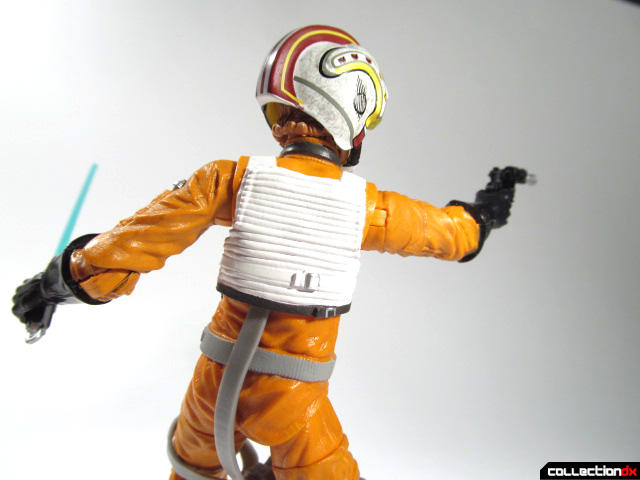 At a $20 price point, Luke comes with just about everything he needs and looks great. I'd recommend him to any Star Wars fan out there! If Luke Skywalker is an indication of things to come from this line, then I'm really excited to pick up the rest of the Black Series. 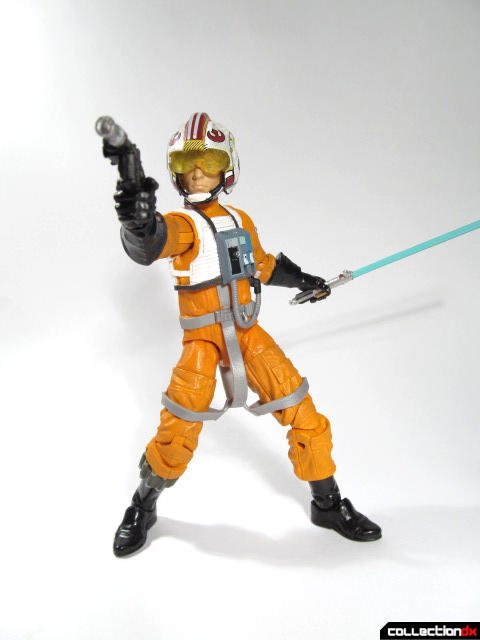 8 comments posted
My favorite part is when you

My favorite part is when you said "posing this figure is a dream!" RIGHT after a picture of a motorcycle humping Luke Skywalker.

Buddy I don't know what's goin' on in your dreams....but I like it.

My day has been made xD

I find the pic with the dirt bike humping Luke HILARIOUS

So Kuuga was using his bike incorrectly all along!

I always wanted an action figure of Luke from Super Star Wars: The Empire Strikes Back for SNES.

Nice work Mr. Jmann! I love this line, it's the first thing Hasbro has done in ages that has exceeded expectations.

Thanks for the praise boys!