The Jumbo Thundersaurus Megazord was the fifth entry in Bandai Creation's line of Jumbo sized Power Ranger robots and the first from the Dino Thunder series. It followed previous releases the Wildforce Megazord and Isis Megazord from the Wild Force series and Storm Megazord and Thunderstorm Megazord from the Ninja Storm series. In my opinion, it's one of the weaker entries in the line, possibly the weakest. I tend to flip flop on whether I like this or the Wildforce Megazord the least. 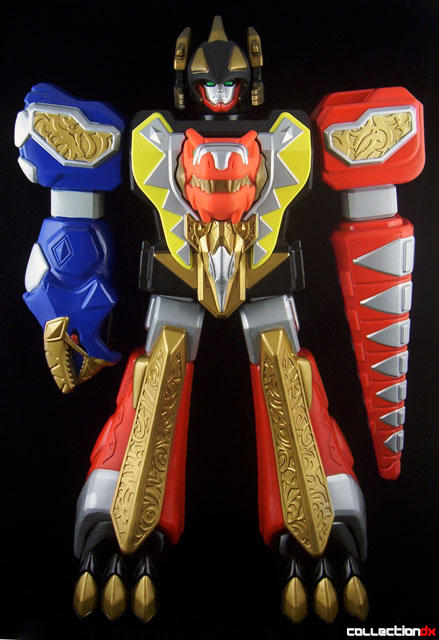 I think I would like it more if it didn't have those silly patterns within the gold on the legs and shoulders. I just tend to remind me of bad wallpaper. Also, there's something about a robot with toes that just seems off to me. Also, the right hand looks kind of awkward to me. I can't quite put my finger on it. 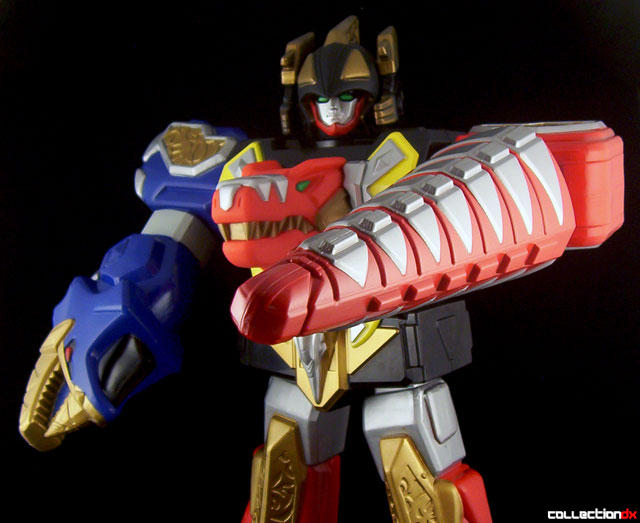 The giant drill/tail for a left arm doesn't bother me that much like it would any other Jumbo collectors. I've heard some people complain about it, but no one complains about the drill arm for Getter 2. I think it might just be an anti-sentai sentiment at work. The arm on this toy can turn, but it doesn't actually spin, unfortunately.

I do quite like the sculpt of the head, even though it tends to remind me of Dancougar. 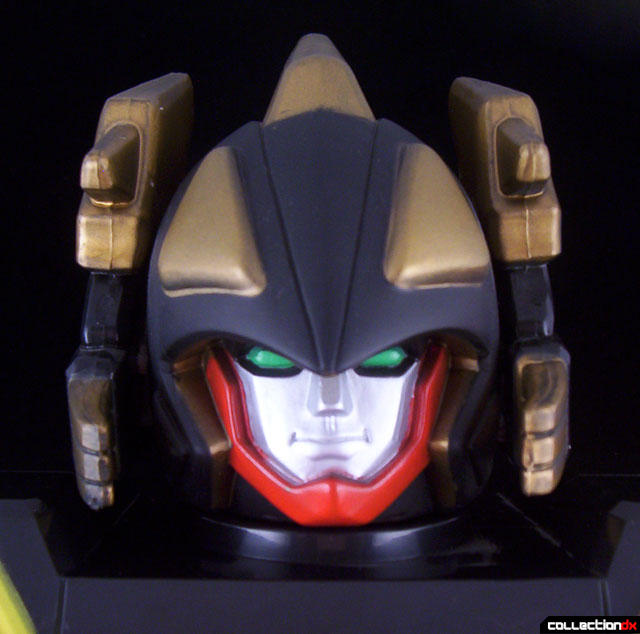 I'm not quite as enamored of the head that sticks out from the chest. It sticks out a bit too far for my liking. It really seems out of place on what is otherwise a very thin robot. 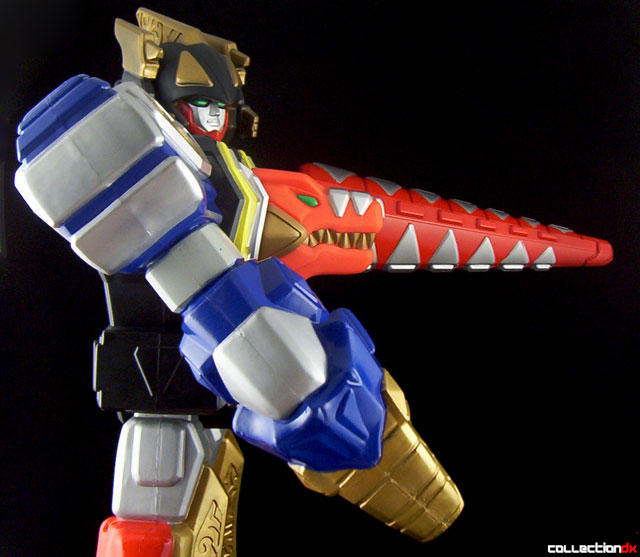 Both heads are made of soft vinyl and need to be attached when you buy the toy. Another plastic handle for the back is also included again. As is the case with some of the other toys in this line, some of the paint applications are a little bit spotty.
Again, the box can be displayed either landscape or portrait style. 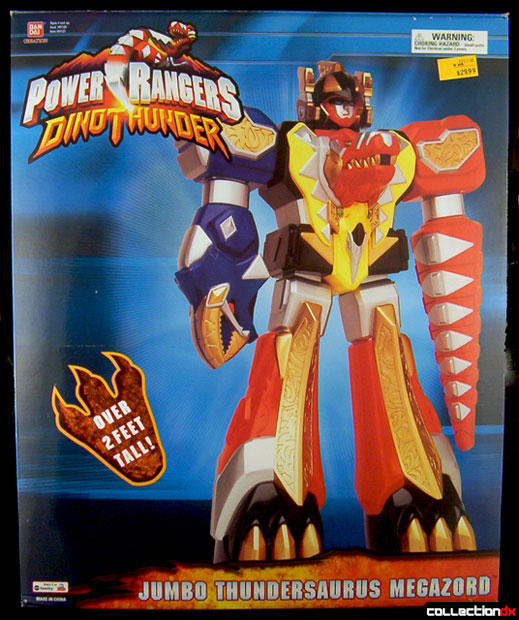 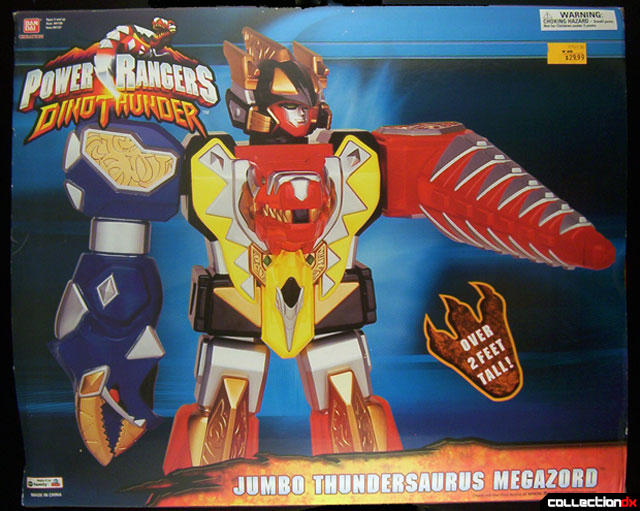 As a fanatic for anything Jumbo, I'm glad I bought this guy. But I suspect that if you were collecting when this came out and didn't get it then, then nothing will change your mind about it. There are no hidden surprises with these things. Basically, either you like the way it looks or you don't. 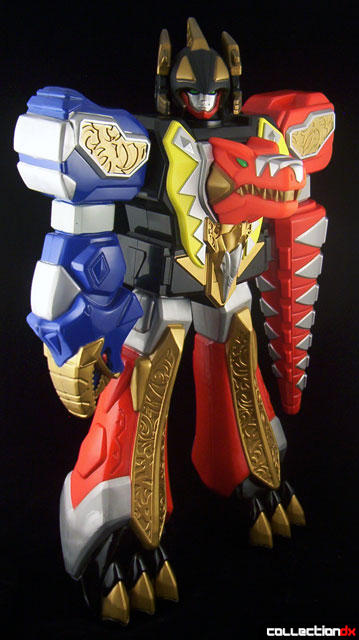 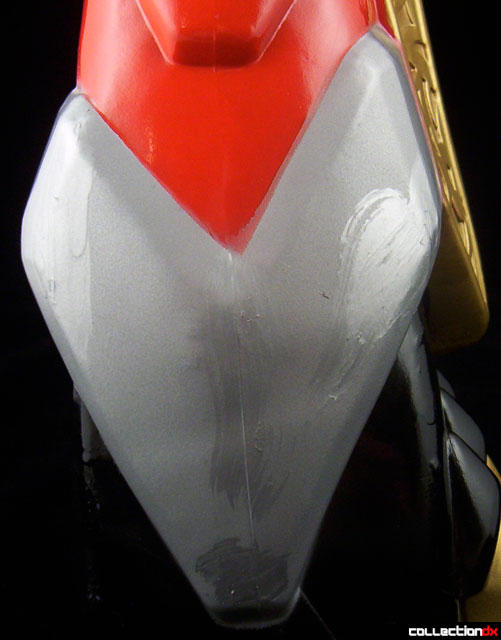 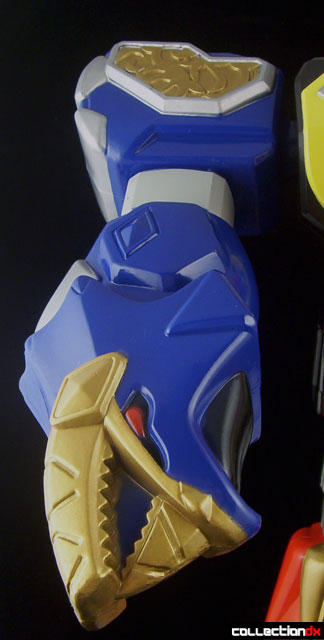 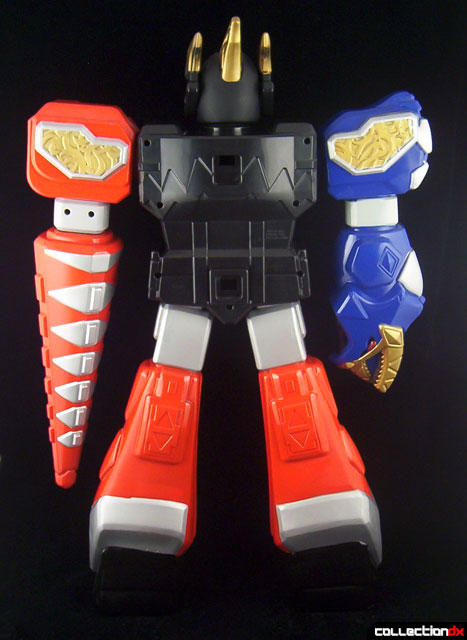 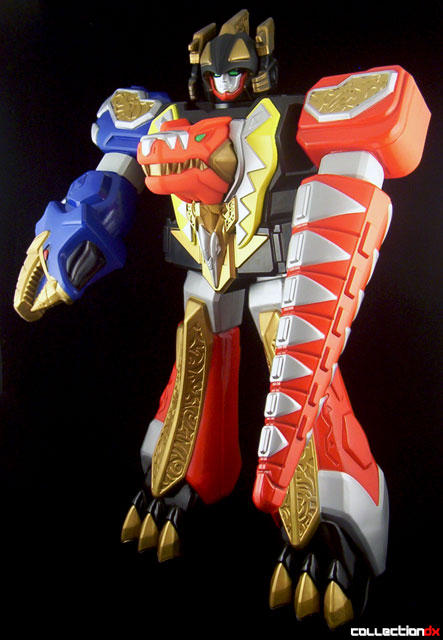 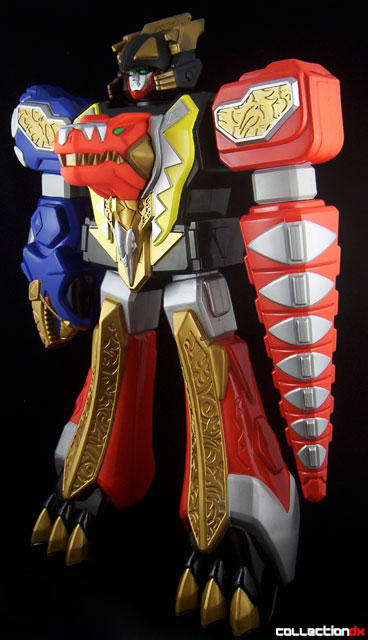 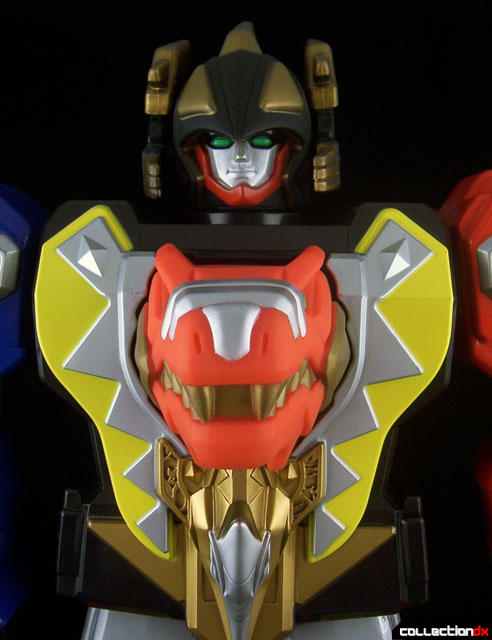 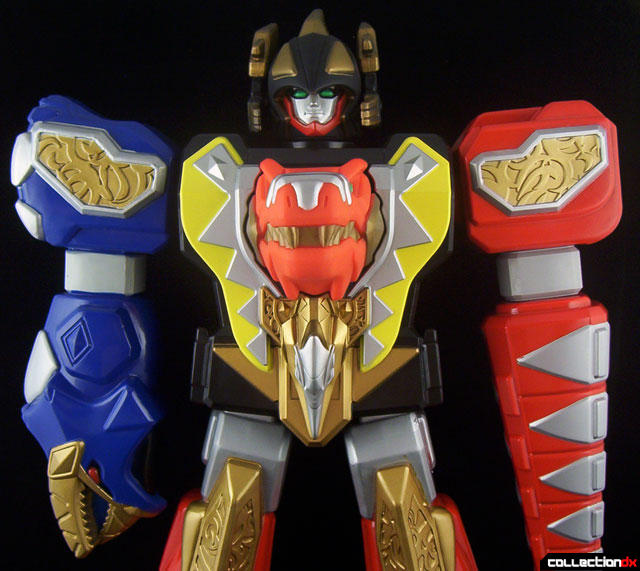 Admittedly, the Thundersaurus Megazord/Abaren-Oh has a bad-ass transformation sequence. It's not one of my top-tier Super Sentai hero mecha, but it's not horrible.

...I don't like mecha with individual toes either. They may provide a better grip on the ground, but don't offer the precious friction, usable space, or 'believability' befit a giant robot. =\

I do love, however, how it was introduced in the series- three out-of-control robot dinos roaming around downtown Tokyo in the midst of late-night traffic. We so-rarely get night battles in Super Sentai, and to introduce one at night, I felt, was extra special.
------------------------------
CollectionDX Staff

Having got my hands on a specimen, I can confirm we had the strings, and not the chains. Generally, while we get better paint apps than you (or at least closer to the Japanese version), we never get different materials (i.e. more die-cast in the older ones, different accesories and sound features) to you. The mass-release RPM High-Octane Megazord is the rather appealing chromed version, for example- it may use the same materials as you, but we get a nicer paint app on general release.

Also, believability and the mecha made out of talking dinosaurs from the alternate earth created when the fabled meteor hit. Yeah.

That response is so out of left field I don't know how to answer it. I wasn't even talking about the Zeo Megazord!

...But isn't commenting on a two year old review without any prior comments a bit out of left field? And I just felt like telling you anyway, instead of waiting for Zeo/Oh to come up in random conversation.

"...But isn't commenting on a two year old review without any prior comments a bit out of left field?"