The original "Outer Limits" has always been one of my favorite tv shows and it's really something of a mystery why I don't own more merchandise from it. Until recently, the only things I had were both figures from the Zanti Misfits, both by Sideshow Collectibles. In addition to the Sideshow figures, there's also a really cool vintage board game that I'd love to have, among other things.

This set features two 12" figures from the episode "Keeper of the Purple Twilight", which aired on December 5, 1964. The story concerns an emotionless alien who comes to Earth to learn about humans. He manages to somehow take a scientist's emotions (in exchange for knowledge of how to build an incredibly destructive weapon) because he thinks that things like love and hate are energy sources. Honestly, outside of the nice alien designs, I thought it wasn't one of the best episodes I've seen. It's up on YouTube in 6 parts...

KEEPER OF THE PURPLE TWILIGHT

Perhaps the thing that I like most about this episode is that it is the source of a sample found in Skinny Puppy's song Tin Omen. It may sound weird, but one of the things in life that makes me happiest is to be just chillin' out watching some movie or tv show when suddenly you are surprised with a sample that you've heard plenty of times but never knew where it was from. Sure, these days I'd bet there's all sorts of places online where you can find out where they are from, but I still love that surprise. (If you didn't watch the clips, it's right at the beginning of part 3.)

Ok, so enough about the show and the song and whatnot. Now the toys.. Both figures come packaged together in a 14" square box with a lid that swings open to the left to reveal the toys resting behind a clear plastic window. On the back of the lid you will find a synopsis of the episodes, along with production notes and cast and crew credits. Furthermore, there's several pictures from the show and even a picture of Ikar kicking back reading an issue of "Famous Monsters Of Filmland"! 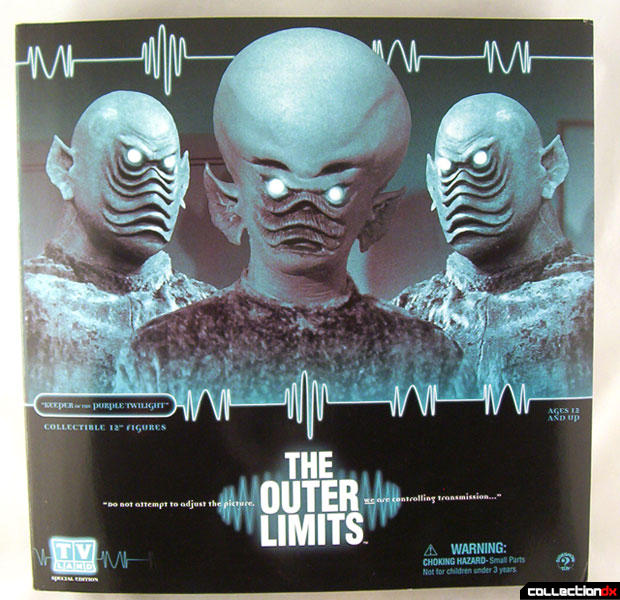 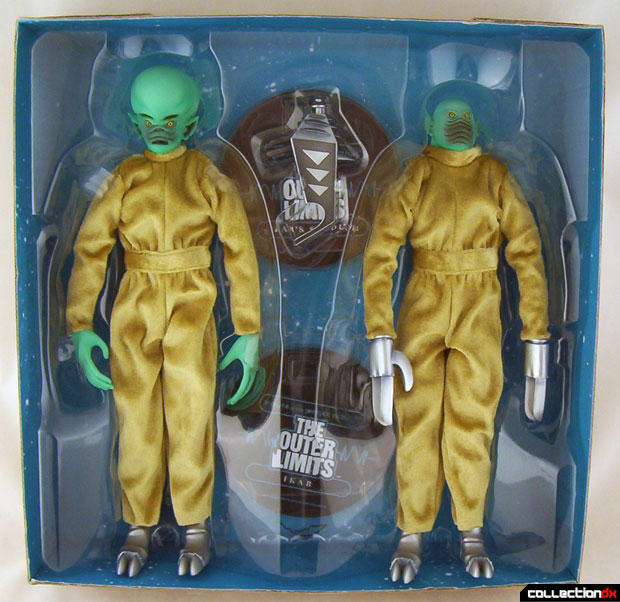 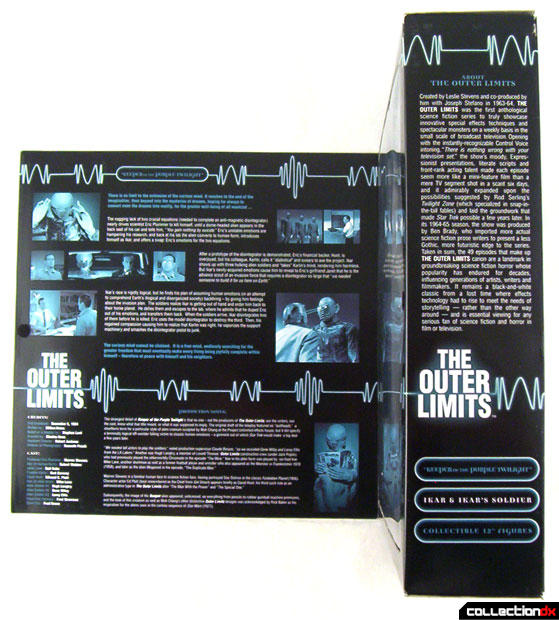 The first figure, Ikar, is the main antagonist of the episode and features a distinctive design with pointy ears, a large bulbous head and a trio of gills for a mouth. The design was quite popular and was used as the inspiration for one of the cantina band members in the original Star Wars. 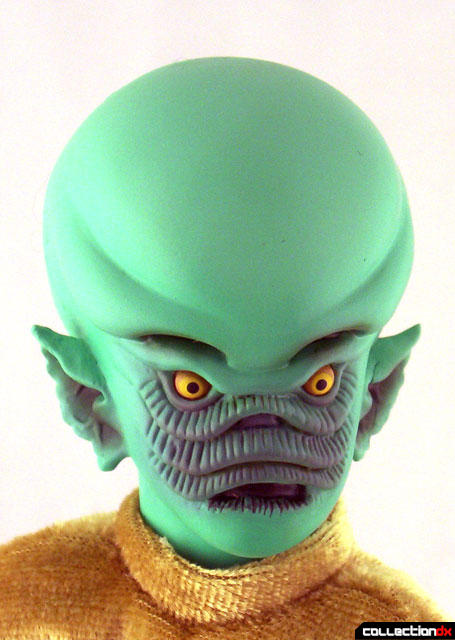 The hands of Ikar have really long figures, but the figure features an odd choice. The left hand has separated, flexible fingers, but the right hand has all the fingers connected to each other. I have no idea why they would bother to make it like that.

As you can see, Ikar also has the gun that he helps create in the episode, but it's not easy to get him to hold it properly. You basically have to just rest it in his hands and hope it doesn't fall out.

The second figure, Ikar's soldier, is basically a modified version of Ikar. It has the same body, feet and clothing, but has a different head and hands. The soldier is meaner looking and not just because his hands look like sharp metallic claws. He's also got an angry look in his eyes, whereas Ikar himself looks almost cute. 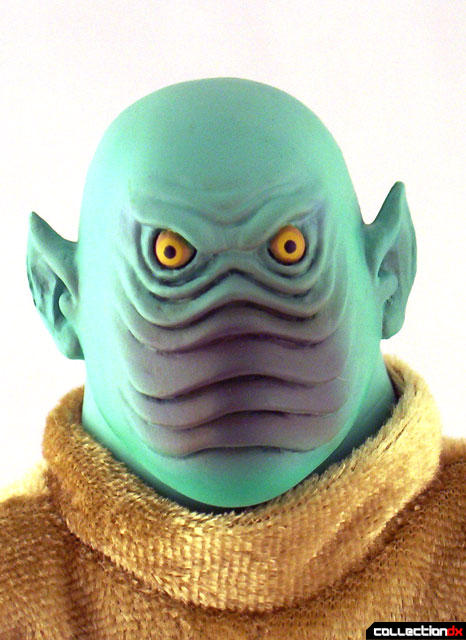 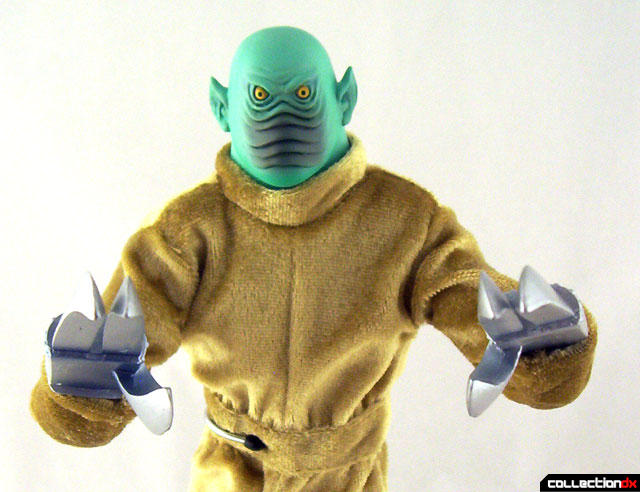 Both figures feature standard articulation for a 12" doll, except for Ikar's soldier, who has a really thick neck that doesn't allow for any significant movement. Ironically, even though the entirety of their bodies are covered by their clothing, the flesh colored figures are painted green to match the heads around the edges. Not the whole body, just near the ends of the clothing. Wish they'd done that for all their figures... 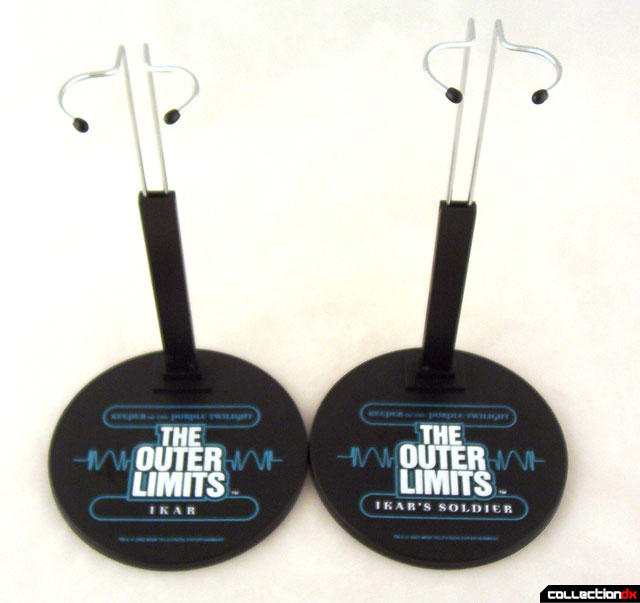 If you're a fan of science fiction and 12" figures, these Outer Limits monsters can be found at a good deal on the after market. Although this set originally retailed for $70, I think I got mine for about $22 on Ebay. Now I just gotta get off my butt and get the rest in this series, not to mention the Twilight Zone figures (of which I have none as of yet...) 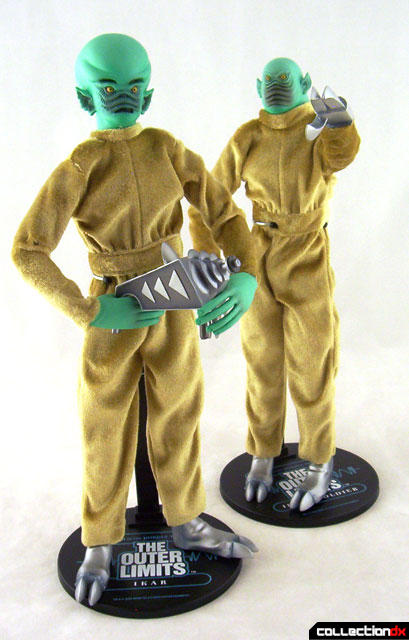 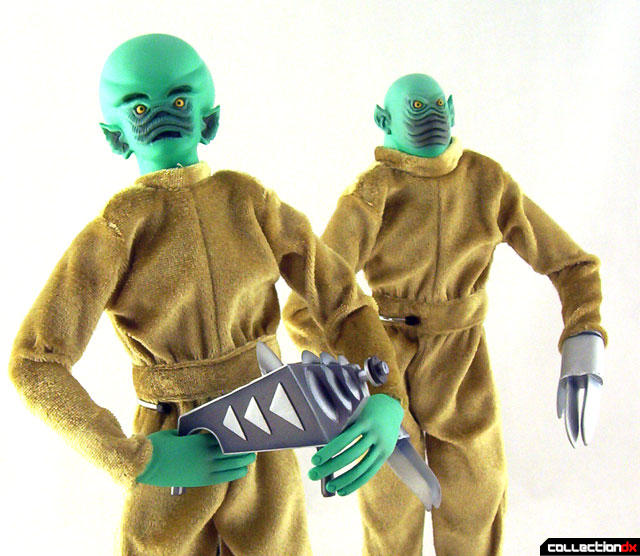 That's awesome, Dave! Thanks for posting this review. I absolutely love the original Outer Limits show, and I, too, am perplexed as to why I don't have more (or ANY) toys from the show! Really need to fix that...

At least I have one Twilight Zone toy: the Invader figure, made semi-famous on TBDX by JB's awesome pic.

No excuse for not having any Zanti misfits, though...

Fantastic review! Have you had the chance to watch Incubus yet? It was a once lost horror/occult film directed by one of the Outer Limits director and starred William Shatner in his first feature film role. What is so great about it is that the dialog was completely in the constructed language of Esperanto and gives the film an creepy unworldly feel. It's like a feature length Outer Limits episode. It's is also known for the curse that befell some of the actors involved. The ending is completely demonic!

Yeah, I saw The Incubus several years ago. I don't remember too much about it, though. Funny you should mention Shatner in an Outer Limits thread, though. One of my favorite episodes ever was "Cold Hands, Warm Heart" with him in it. The alien in that, silly as it was, really scared me! In fact, it would make a great "jiggler" toy.

Wow, that makes sense that he would also be in an episode of the Outer Limits as well....it's all coming together!

I have to find what that alien looks like.

Dude...that alien from "Cold Hands, Warm Heart" absolutely wigged me out! It wasn't the alien design, itself--it was how it appeared. It looked totally like an apparition. And the way it sorta undulated like something flapping in the wind...only slowly. Creepy as hell!