Bootlegs are a commonplace treat? in most surly and less-than-reputable shops, namely giftshops and dollar stores. I’ve seen a lot of bootlegs reviewed here and always wanted to at least see some myself in the wild. . . even maybe to own one. I was never blessed with such luck in the many years I was aware of boot legs (maybe the blessing was that I hadn’t seen them). Would my bootleg search ever come to a close?

Well, yeah. After returning from a rousing Florida vacation, my brother presented me with Fhreihterpan, a wonderfully hodge-podged and Engrished bootleg, one all my own. And it was 3/5s Menasor, my favorite combiner! Needless to say, the search was over. . . and man, are bootlegs crap.

Packaging:
This is the best part right here.
Printed on this cardboard are all of the original G1 illustrations of the characters but recolored to be the limbs of Fhreiterpan instead of Menasor and Computron (very convincing). It’s so nasty and gregarious that I can’t help but love it. 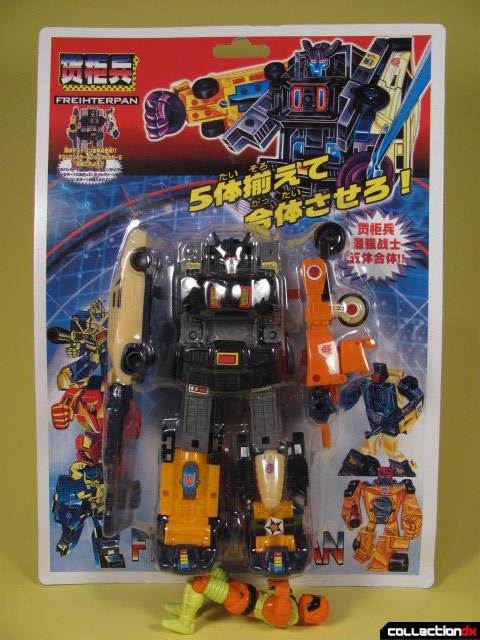 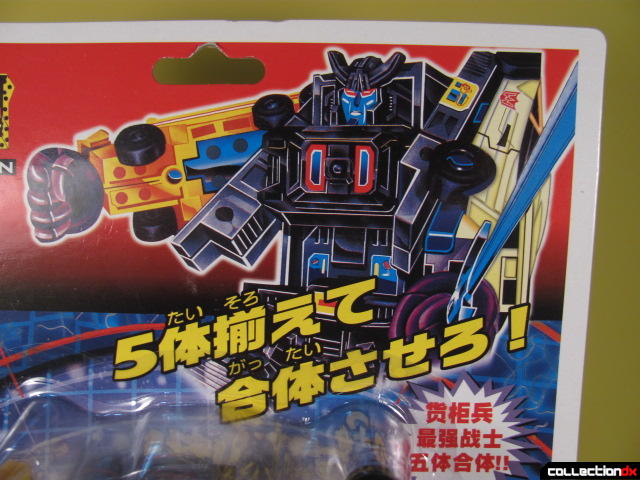 And on the back are the instructions for each of the little duders held within, printed on classic yellow cardboard with red ink. 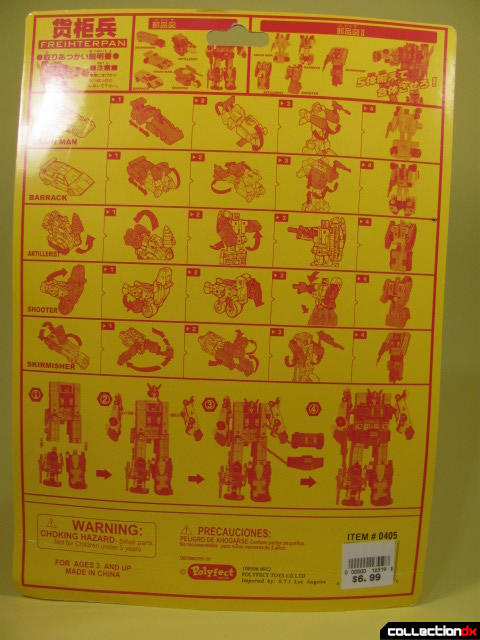 These instructions are a lie and a shame, but we’ll get back to that shortly.

The Toy
Fhreiterpan is a combiner, so let’s split this up for a moment:

Brain Man (Dragstrip)
Firstly, Brain Man, a sorely simplified and dumbed-down Dragstrip.
His alt mode is all right; I mean, he looks like he’s supposed to and his cockpit still opens. Only his back wheels move, though, and those stickers fly right off. He’s just a lump of orange plastic. 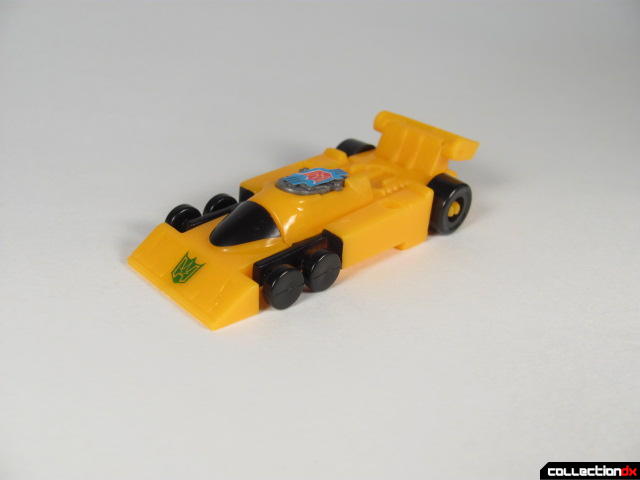 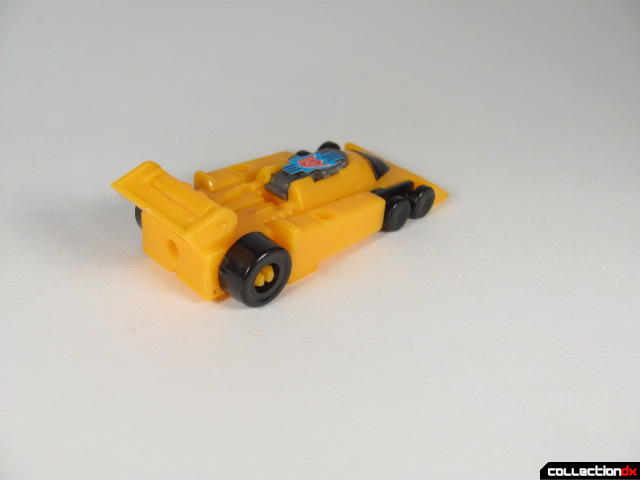 Robot mode is suffering. The only thing left for his transformation is to flip his hood down. No arms or leg extension to be seen. Rubbish but not the worst 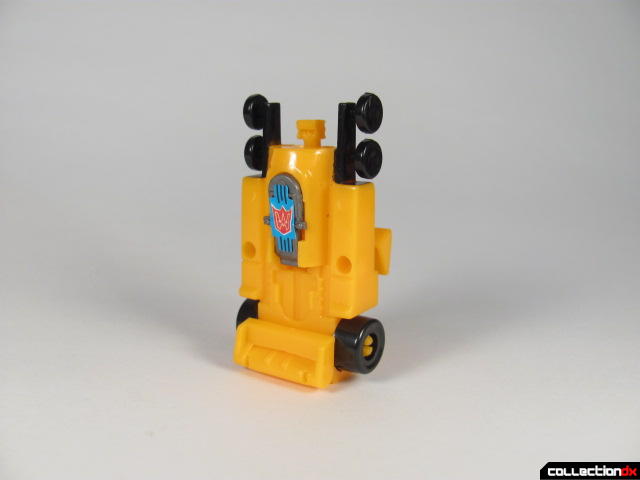 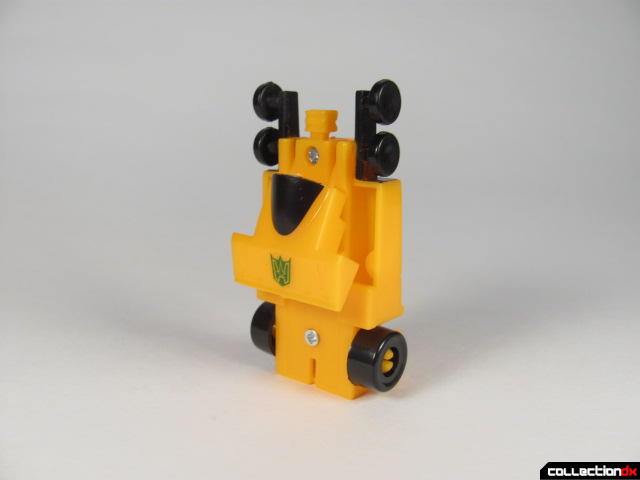 Barrack (Breakdown)
Barrack actually looks pretty good in his alt mode. Almost all of his colors are there and are pretty okay looking. He’s just a little, simple car guy 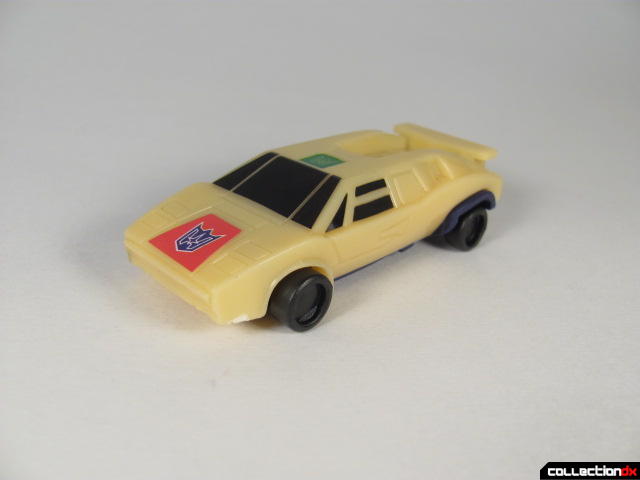 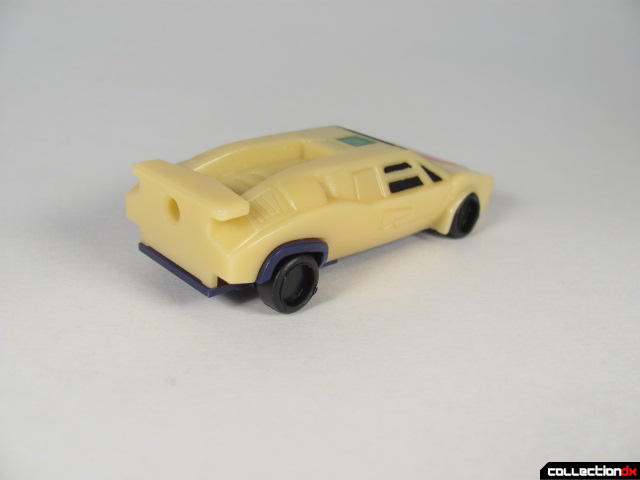 Now, when I say “little, simple car guy,” I mean it. Barrack doesn’t transform.
At all.
He’s just a Dollar Store matchbox car!
The only thing that’s remotely “transformers” about Barrack is that his combiner pole flips out. 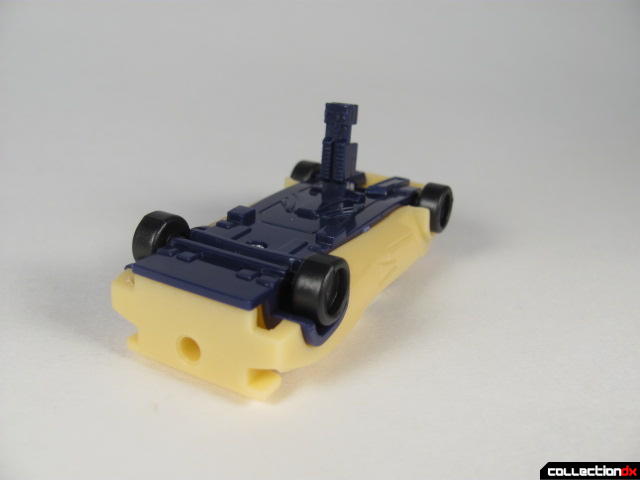 Artillerist (Nosecone)
Actually from Computron, little Artillerist here is just like his brothers: simplified and nasty. 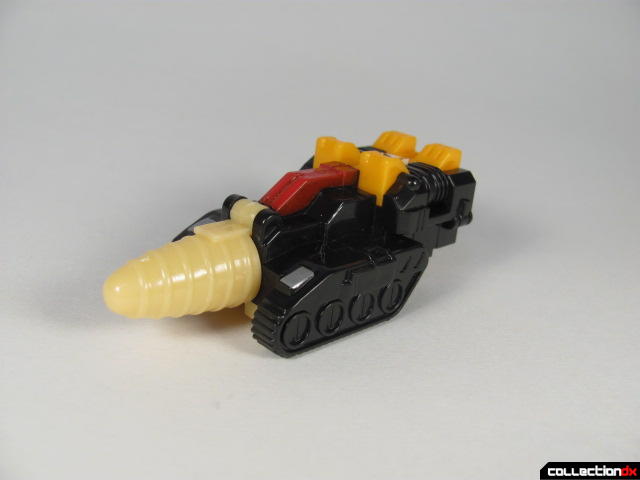 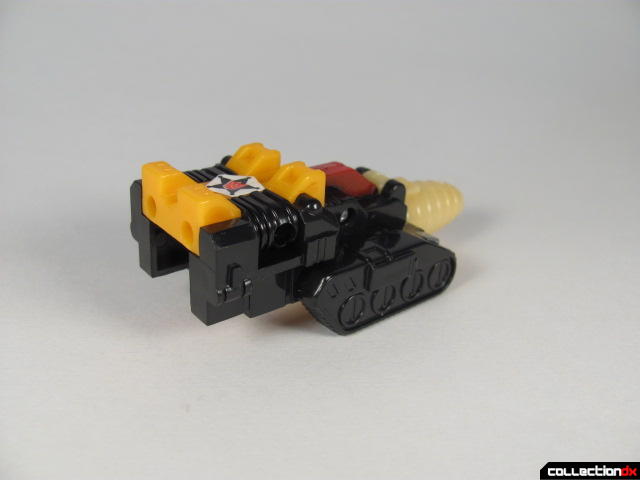 All his detail is there and he’s a solid figure, but the transformation to robot mode isn’t more than just tipping his drill up. No arms or leg extensions. 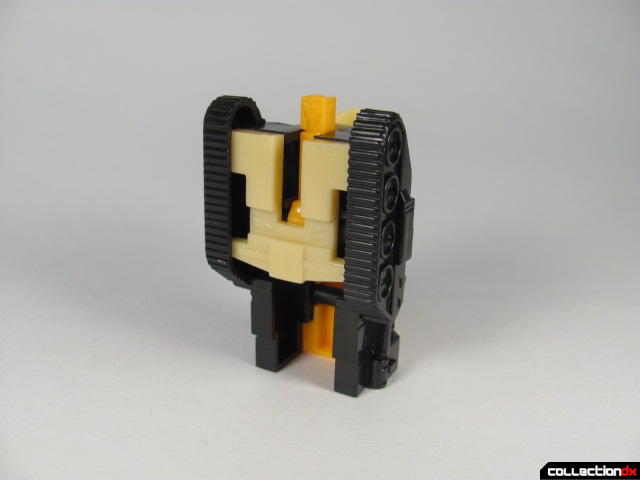 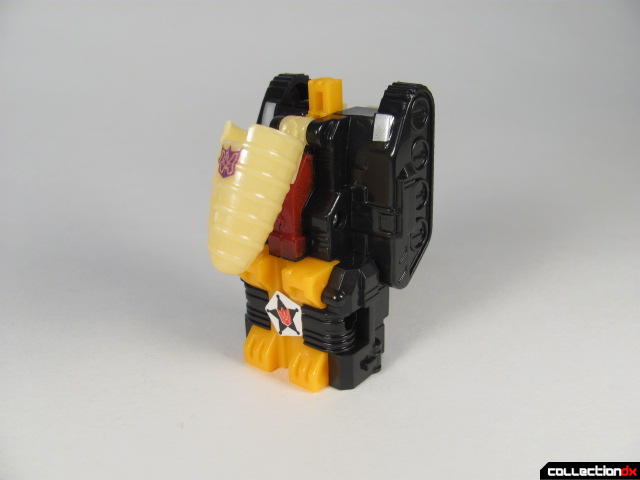 Shooter (Afterburner)
Little Shooter here is actually the best of the limbs (and also from Computron); he even comes with his own accessories!
We’re breaking new ground here! 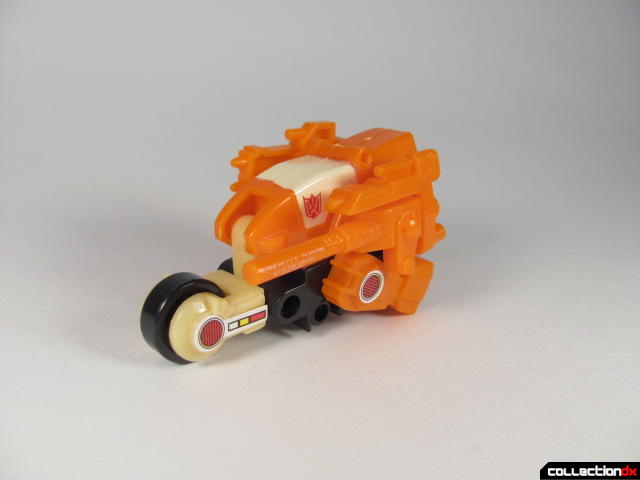 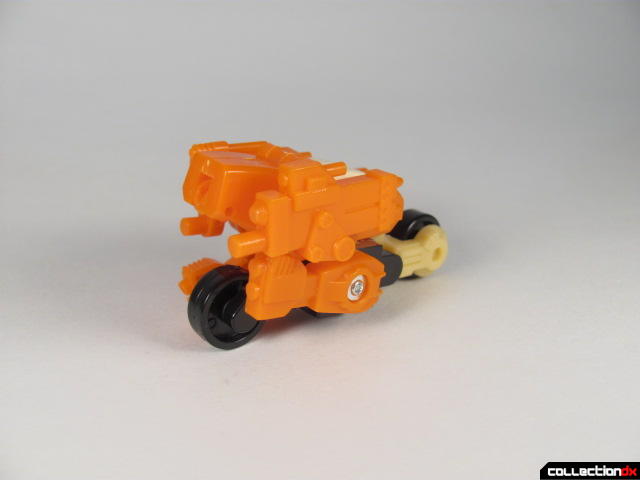 He transforms well, too (assuming you don’t ever want those wheels above his head to come down. . . or to, therefore, ever use him as a leg). I was surprised with this one, solid and almost acceptable. 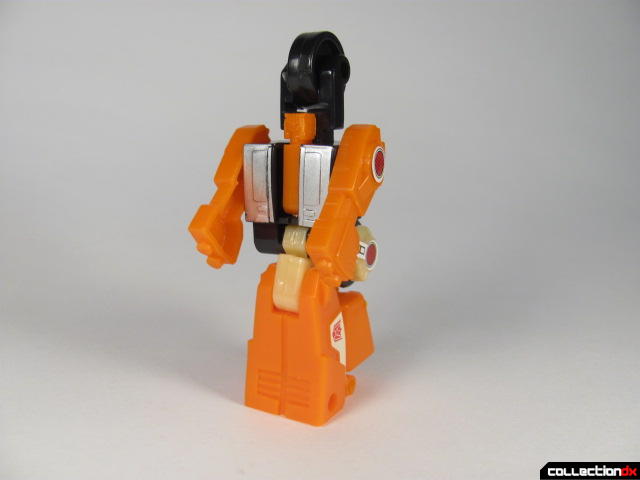 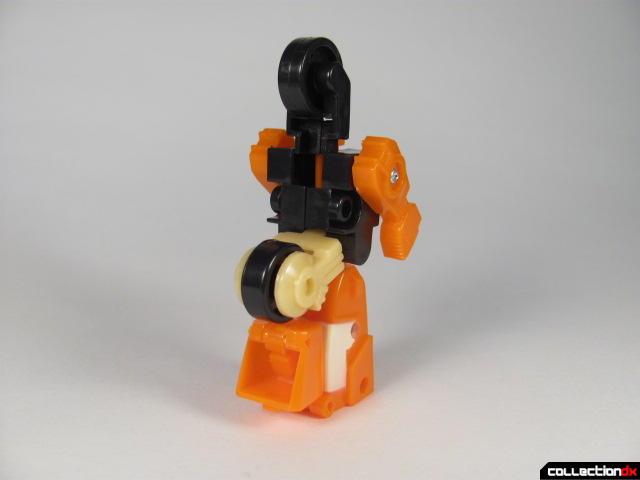 Now remember when I said that the packaging was a lie and a shame?
Well, the instructions purport that each of these limbs all fully transform. Wasn’t I grieved to find out that none of them transform fully and poor little Barrack is just a normal car!

Skirmisher (Motormaster)
The main bulk and center of Fhreihterpan, Skirmisher is pretty much the snake’s hips in this monstrosity of a bootleg. He looks the part and sports a good bit of paint and detail. 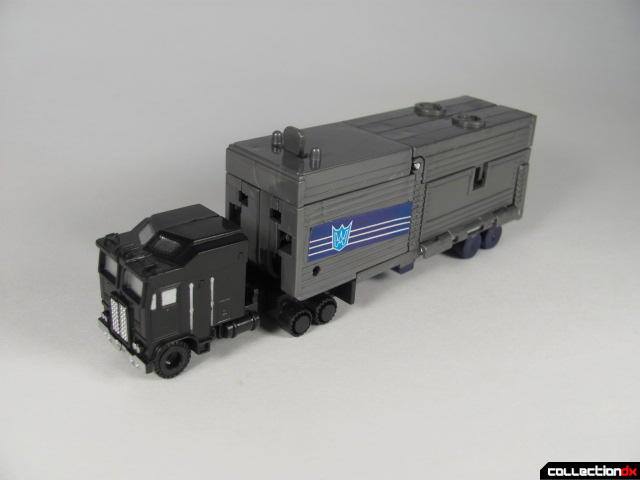 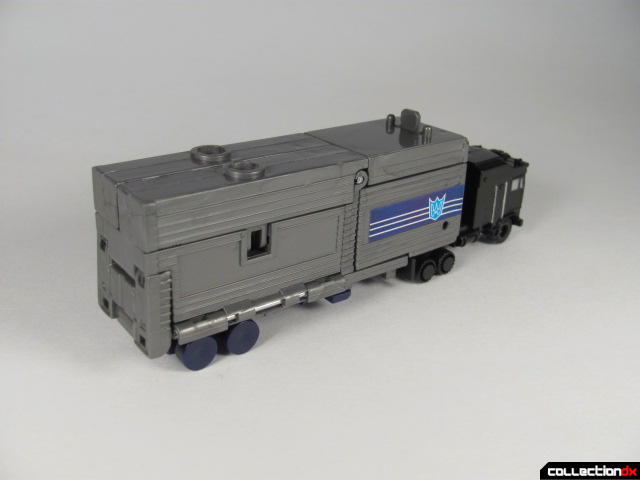 Skirmisher’s base mode is also included 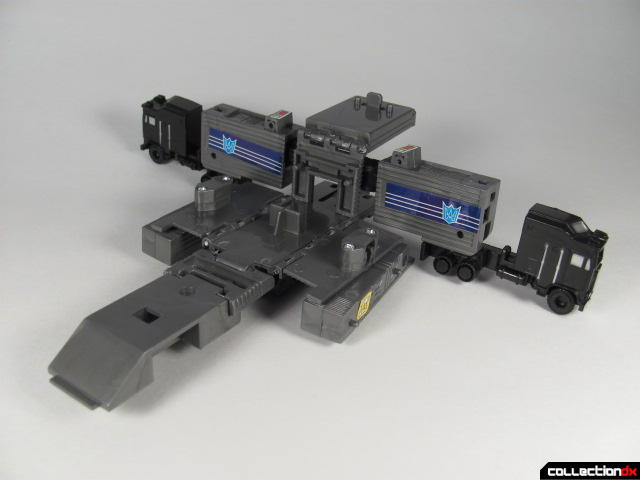 When transformed, however, Skirmisher starts falling flat, what with unpainted and crummy plastic everywhere. It looks even worse here ‘cause he’s so much bigger: 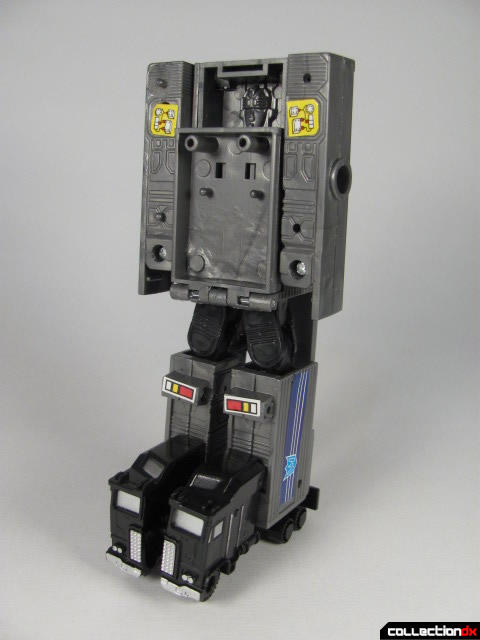 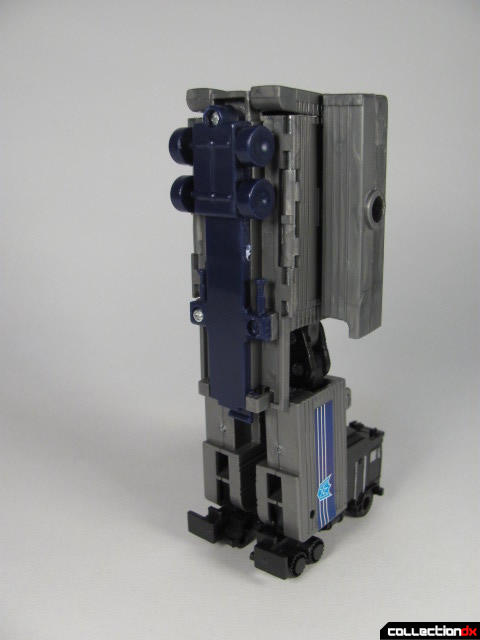 Fhreihterpan (Motortron/Compusor)
The awful mess comes together. Unsurprisingly rickety and awful, Fhreihterpan is a chunky combiner of yesteryear. His arms move at the shoulder and he has a purple gun (but no sword, chrome or otherwise). 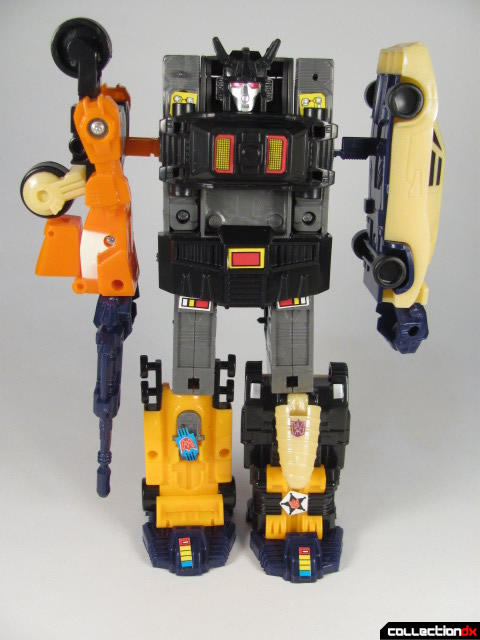 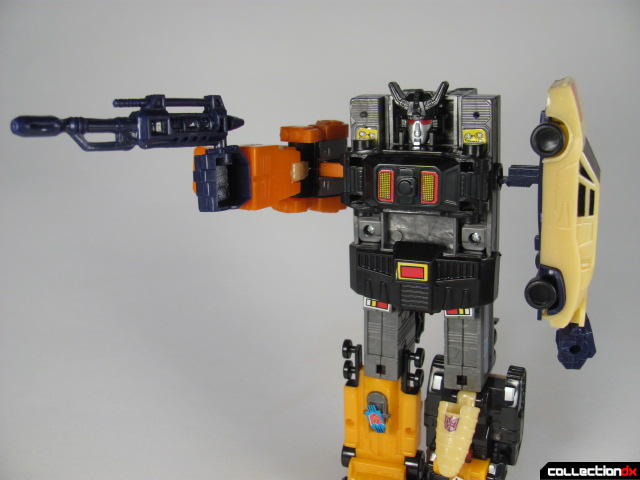 Closing remarks:
Wholly unremarkable and ready to break in more than a few places, Fhreihterpan plain sucks. Plastic is crap; stickers are laughable; is a kit bash. Not much else to say.
I think I’m done with bootlegs.

I actually acquired a 5-pack of these guys a while back that included Menasor, Devastator, Superion, Bruticus,& Defensor. Everything you say about this kit is absolutely, 100% true, but I can't help that these guys have a place on my shelf anyway. They complement my WST Transformers nicely. Mold-wise, they're actually pretty faithful, & if you get the Reprolabels for Devastator & Superion, they actually look much, much better. But yeah, the transformations-- if existing at all-- are really janky. Look, but don't touch :-)

I've seen these a lot. You can never find a Menasor bootleg without his regular limbs.

I found a freighterpan in the same packaging in about 2011 where the limbs have more functionality! They all transform the same as the G1 except breakdown and drag strips legs don't extend. Other than that, same packaging! In about 2013 I found the one you reviewed here too!