I’m hesitant to give a lot of backstory about this series because so much of its fun is in the reveals as you progress through the game BUT if you REALLY want a mildly spoilery introduction to the Mass Effect franchise the recap below of the first game is right up your alley without giving away anything from the second or third games.

This is the male version of Shepard. Player have the choice to be either male or female and each is voiced by a very talented voice actor. The fan base is pretty split their favorite, so if FemShep is your bag she is due in December. Players can also customize the face of their Shepard so this release is based on the default Shepard model. 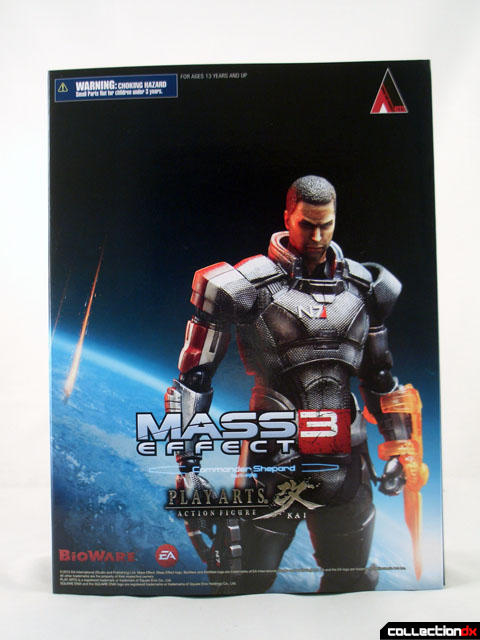 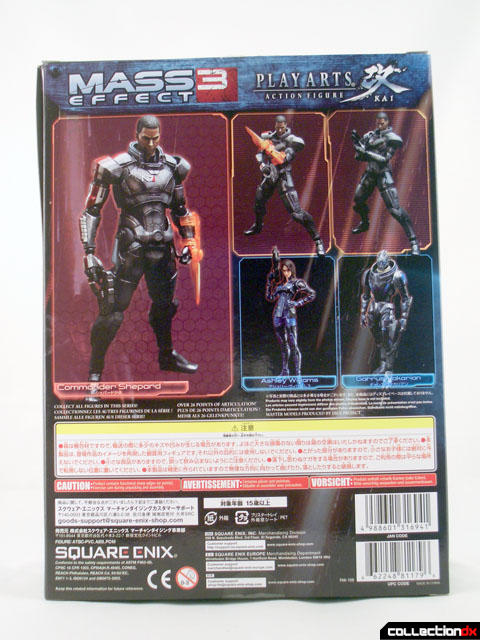 The packaging is a four-color window box with a lid and images of the figure decorating it. Pretty standard fare for Japanese toys of this caliber. 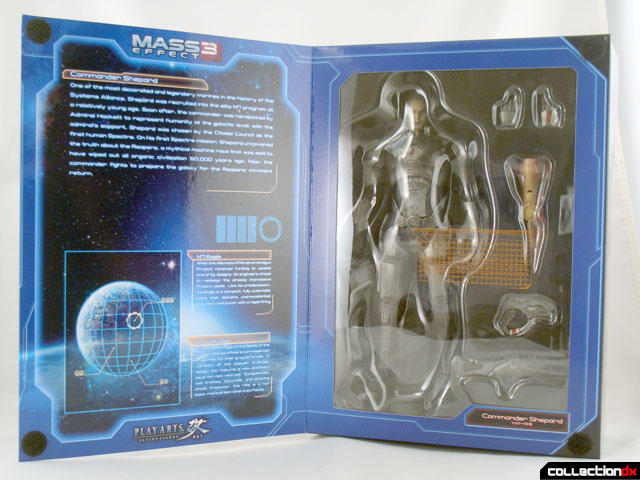 Let’s get the obvious out of the way, the face detail is painted on way too heavy. The two human figures I have both have this problem. The one alien figure I have doesn't. 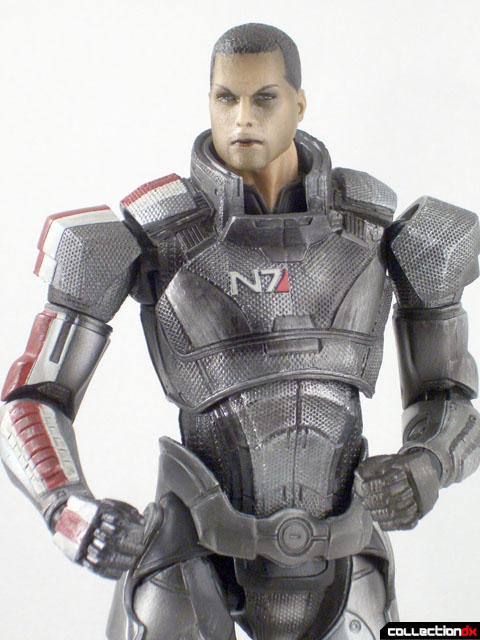 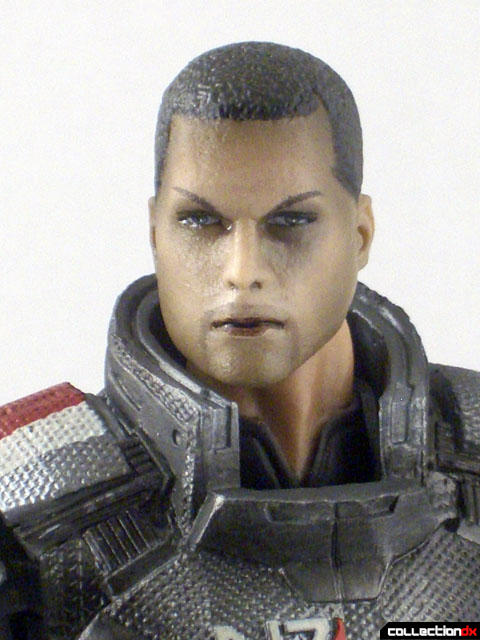 This kind of heavy handed brush work works very well on armor as you can see in the rest of the pictures, but not so hot on the face. On the shelf he looks fine, but up close you can’t help but notice something is off. I am really tempted to see about having a customizer redo the face because it’s the only thing really wrong with the figure. 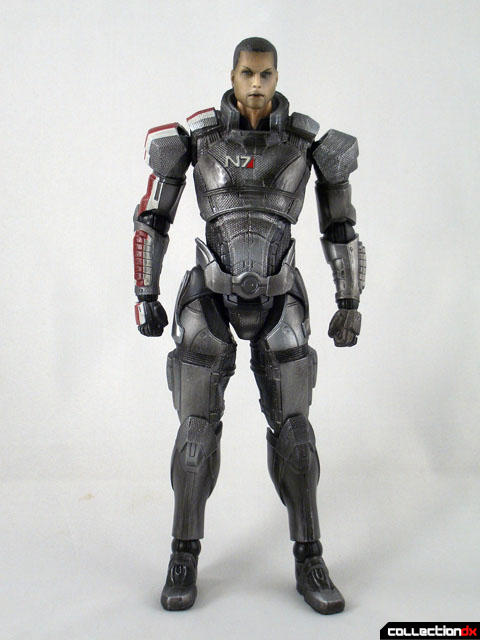 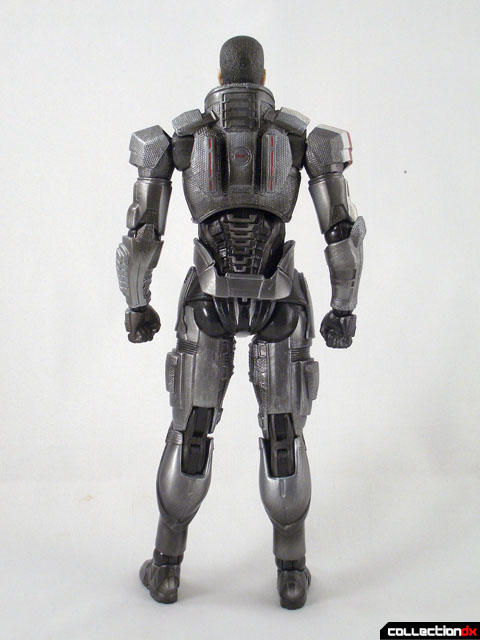 The figure stands just shy of nine inches tall and that really helps it stand out on the shelf. 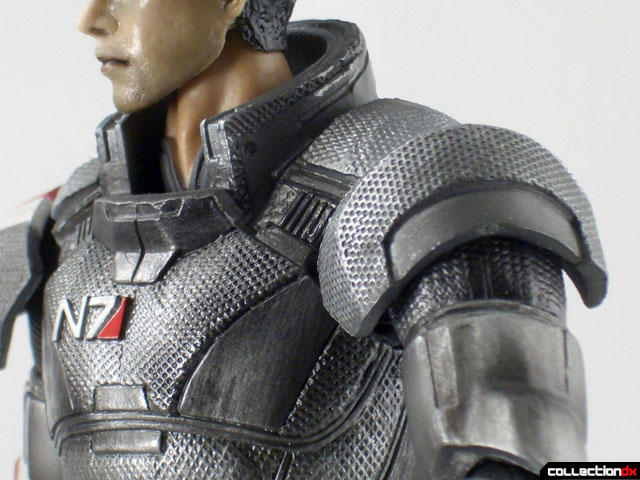 The N7 armor from the game is as much of an icon as the characters themselves and it is reproduced beautifully here. 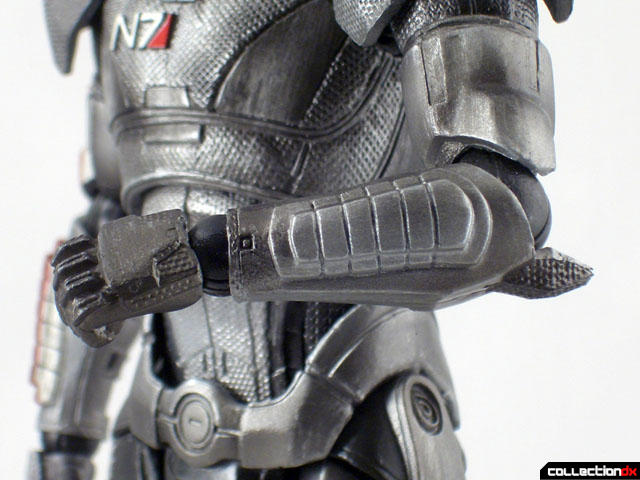 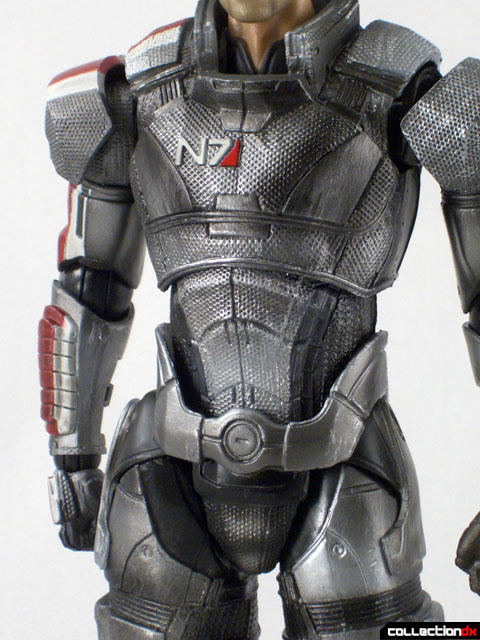 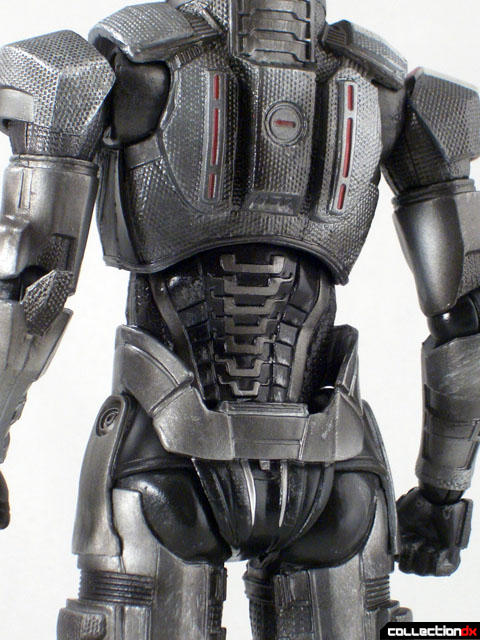 No detail is spared and it is simply stunning. 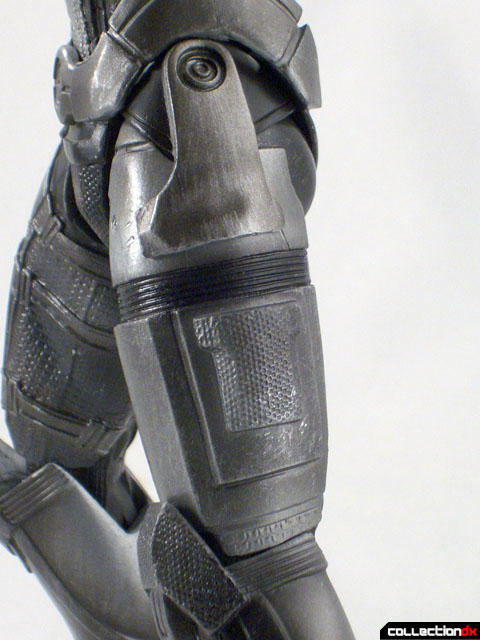 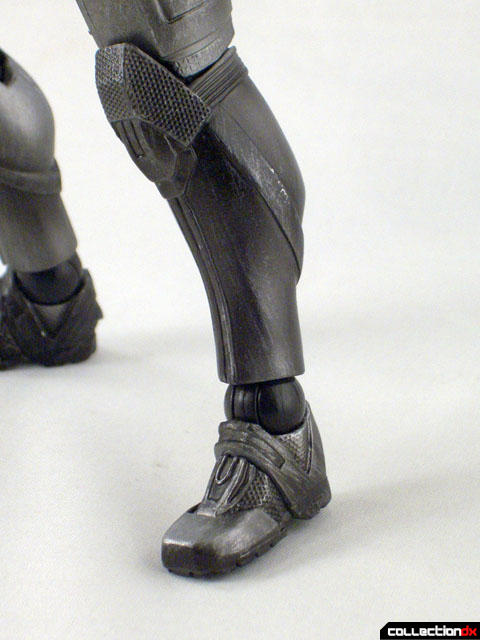 Featuring 26 points of articulation, there is not much you can’t do with him. Ratchet joints are located in the elbows, wrists, thighs, knees, and ankles. 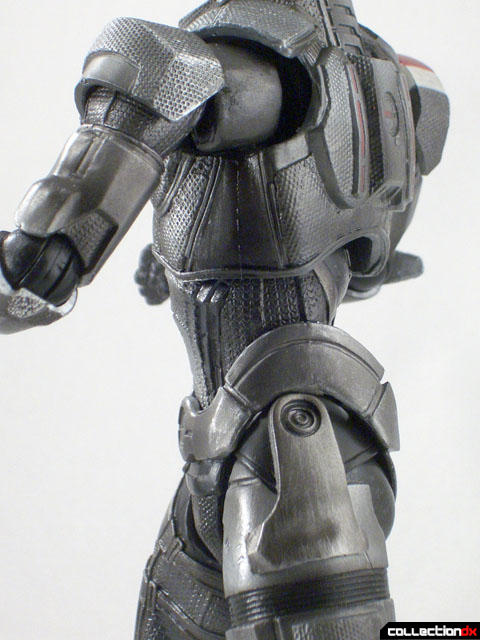 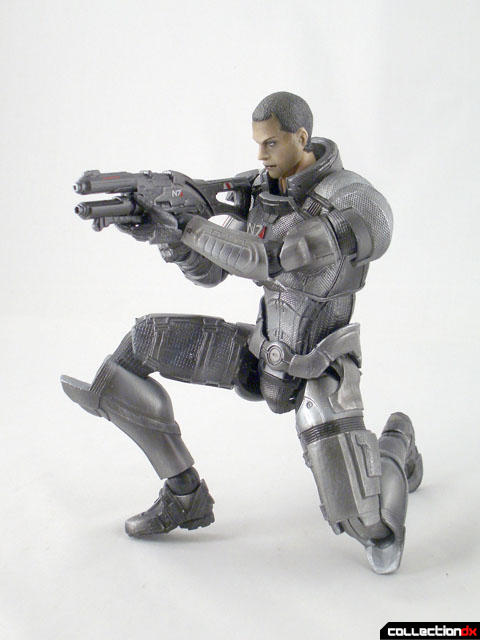 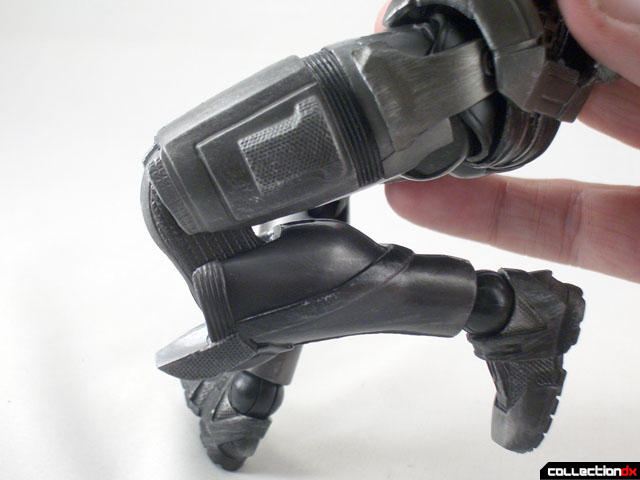 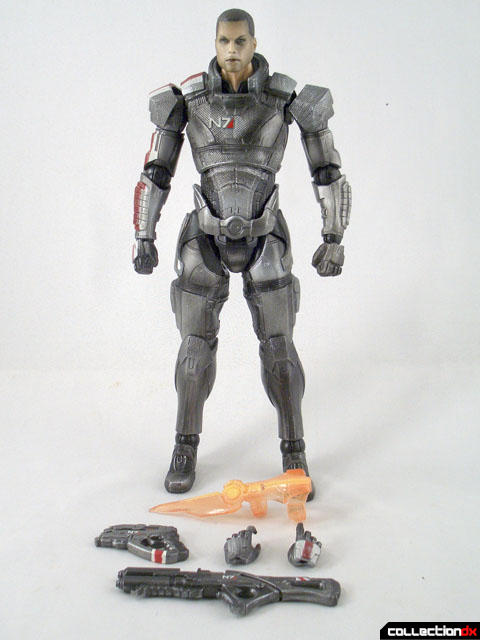 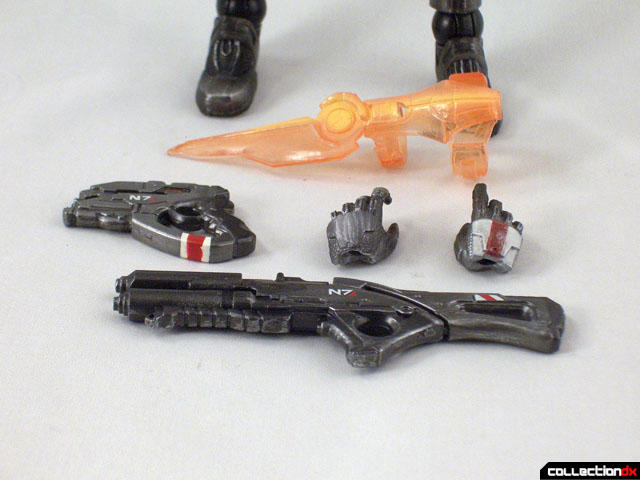 Due to the nature of the game customization the included weapons may not be "your" Shepard's weapons. In my case the assault riffle isn't the one I prefer in-game. Luckily the first three figures come with at least 2 ranged weapons so I suspect over time we will end up with a nice arsenal of weapons to mix and match with. 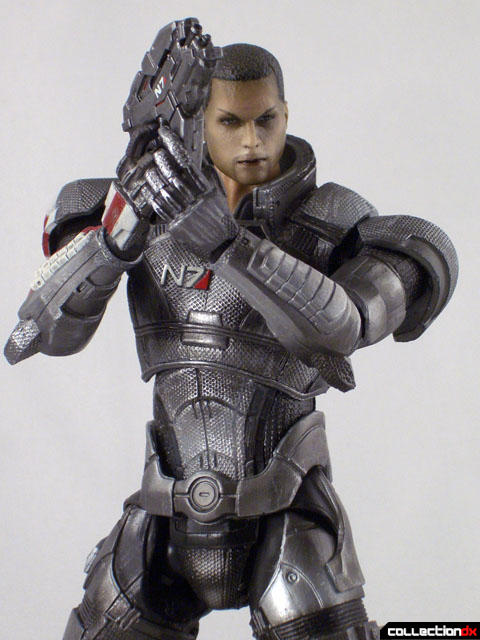 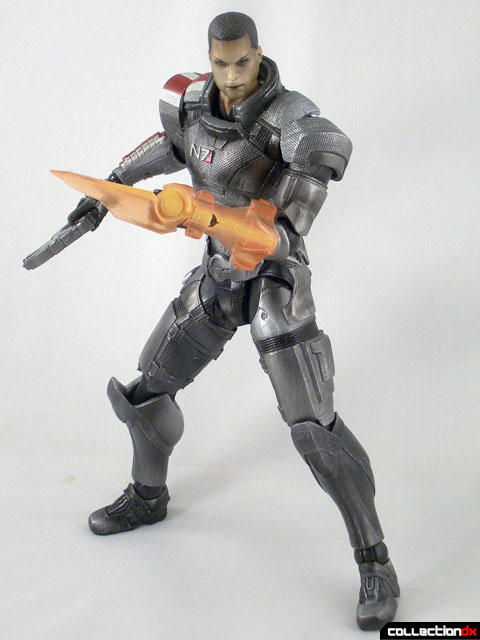 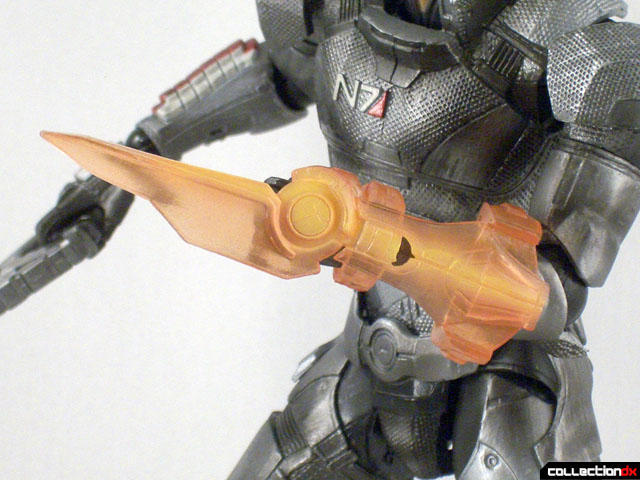 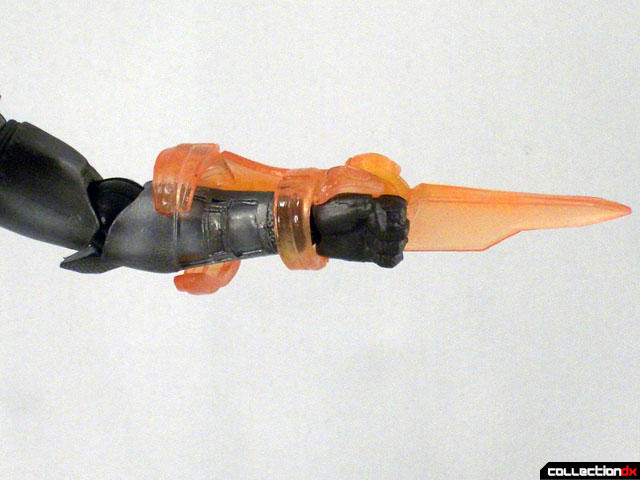 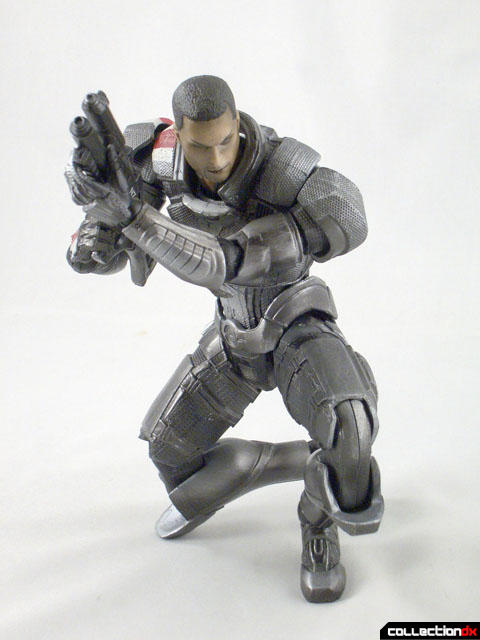 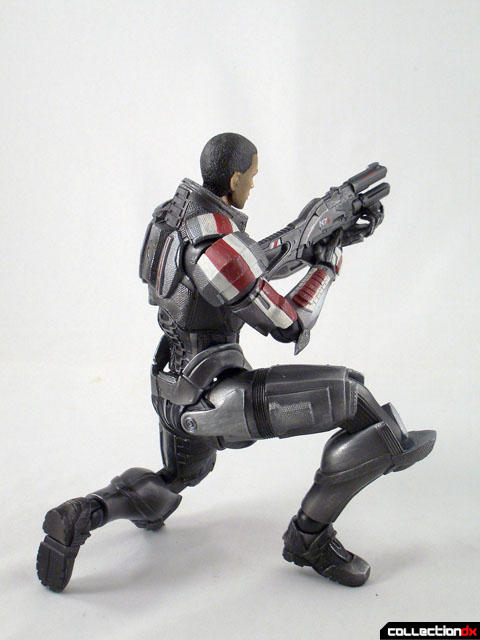 While Square Enix may have missed the boat in nailing the look of his face the rest of the figure does make up for it. If you are a Mass Effect fan I still consider these to be the best collectible going for the money. If Square Enix is smart they should be prepping a customizable BroShep and FemShep. I can see a set of these figures with alternate heads so fans can make "their" Shepard. I am really glad Square Enix scooped up this licence and I do hope they plan on giving us the whole crew...

Awesome. You really outdid yourself on the video review. I'm contemplating on grabbing Garrus, because Garrus.

Yeah, that head... yeesh. Soft detail, small features, almost no likeness to the "default Shepard" face, and the paint work looks like he's shaved off his eyebrows and stubble and recreated them with makeup.

On the other hand, you could yank a head from any similarly sized figure that has a passing resemblance to YOUR Shepard... that's what I'd do.