I guess I should be long past the point where anything surprises me by now, but I'm not. About 15 months ago I got a message from a good friend of mine in Venezuela, telling me about a bootleg of the jumbo Aura Battler Dunbine that he discovered. 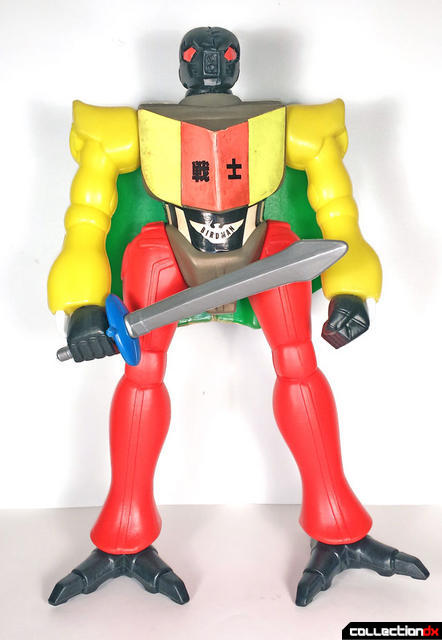 I was dumbfounded. Of course, I shouldn't have been at all. Not only had I been down this road many times already, but I had clear evidence that something like this existed right here in my own home. I refer of course to the sword that came with my jumbo He-Man! How I managed to overlook this obvious clue for so long is beyond me. (And now you know why I wanted to review that, besides just adding variety to the site and maybe annoying He-Man-hatin' JoshB!) 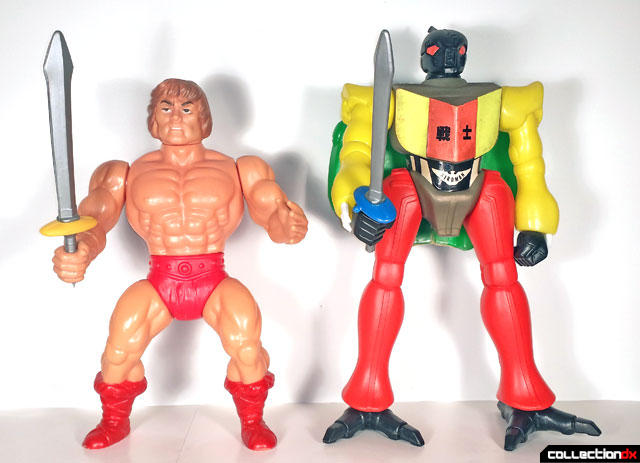 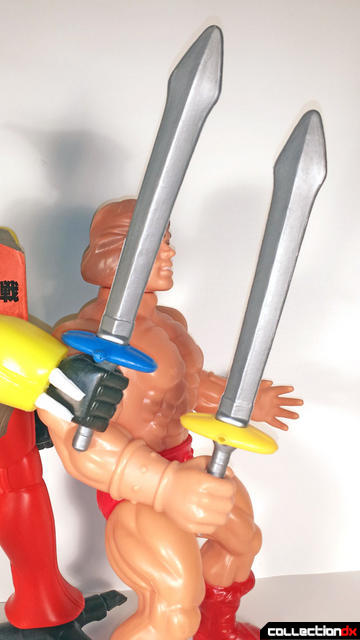 Since the kanji on the chest reads "Fighter" and the English is Birdman, I'm listing the toy's name as "Fighter Birdman" but we'll just call him Birdman for short. The fact that "(Aura) Battler" has been changed to "Fighter" makes sense but why in the world would they call it "Birdman" when the design is meant to represent insects?!?

Birdman is essentially an exact copy of the original Clover Big Machine Dunbine, but cast in cheaper plastic and in multiple colors. 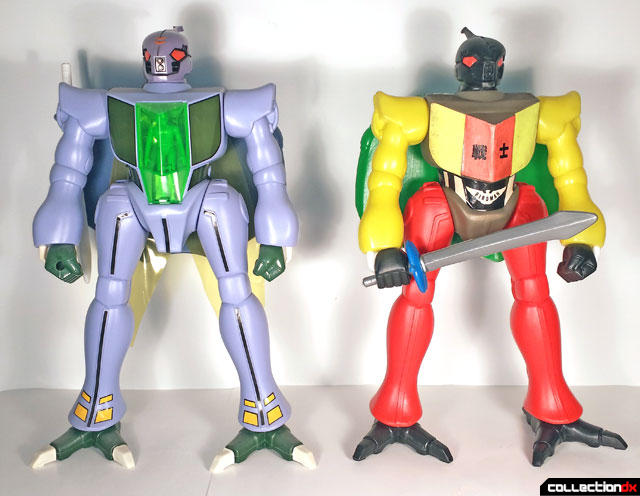 Although the original toys are always top notch, there's just something about all these crazy colored bootlegs that I just can't get enough of. In my collection now for instance, the original is being stored in it's box but the bootleg is on display. To be fair, this is mostly due to space restrictions, but if I had to choose which one ot look at all day, I'd probably pick the bootleg! 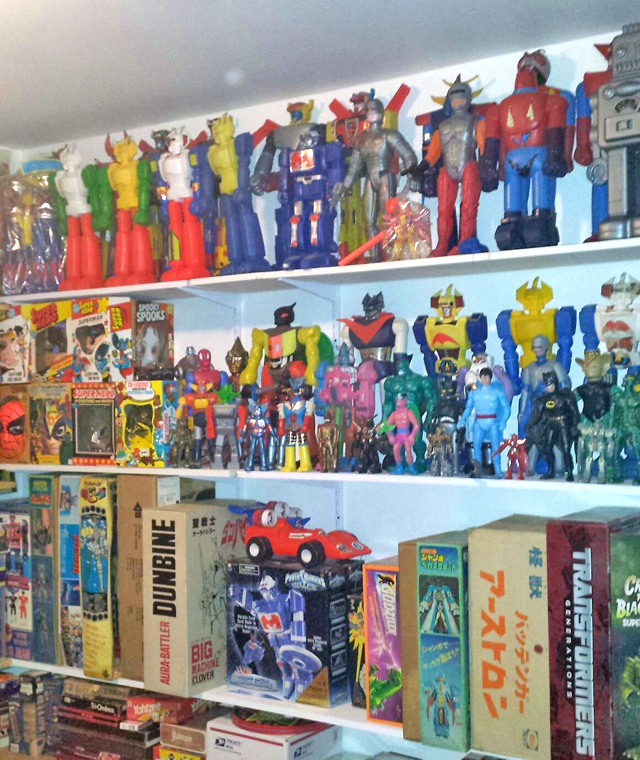 [Can you spot all the "Birdman" items in this picture? ;)]

Speaking of crazy colors, like many other toys of this type, there are several color variations currently known to exist. I've seen at least one with blue arms and yellow wings and another with red arms. Additionally, I've seen the sword with a yellow handle (the He-Man one above) and also with a red handle and white blade. I suspect we've probably just scratched the surface of what's out there.

So besides the colors, I mentioned the lower quality setting this one apart from the original. This is most apparent on the head. Mine has a sort of squished look to it. The eye stickers aren't even properly applied, either. 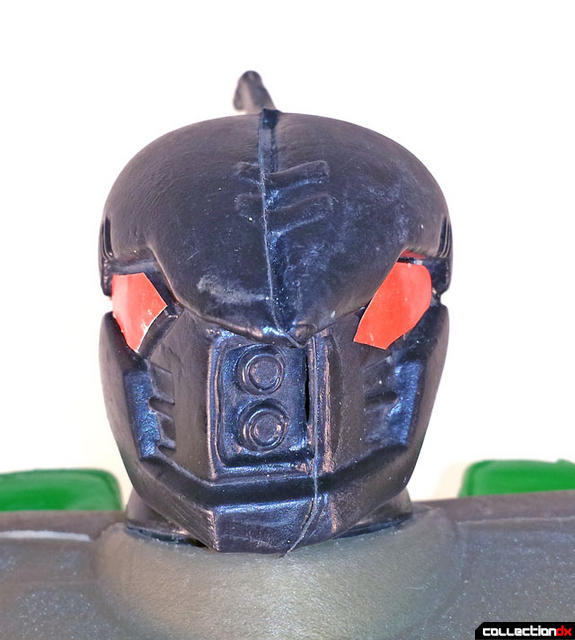 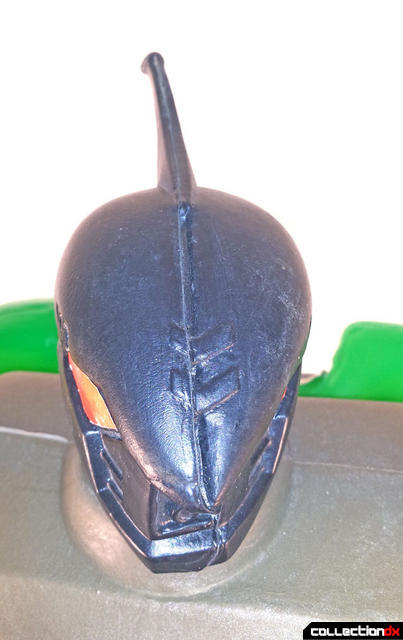 The toy has thinner plastic and is therefore lighter than the original as well. The thin clear plastic wings that are present on the Clover version have been omitted for this one, too. 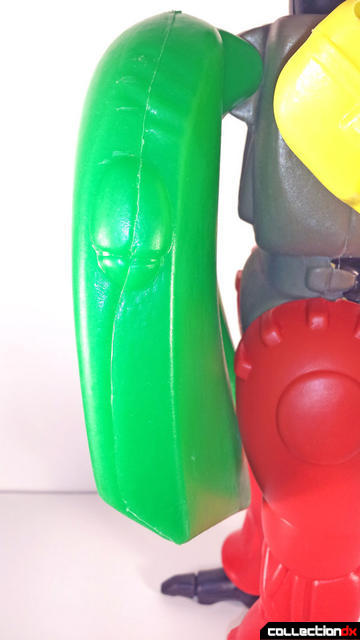 The back of the wings also have a sticker saying "Fighter" in kanji. 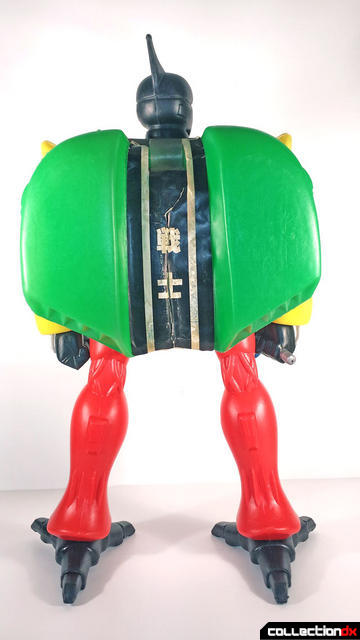 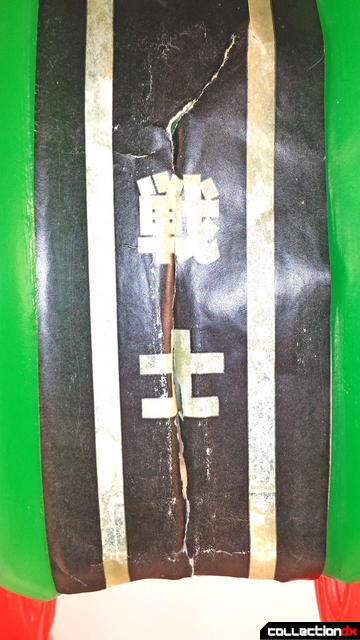 Of course, the biggest change in mold is the result of the clear plastic cockpit (and pilot figure) being left out of this version. Instead, the entire torso is one piece of plastic with a sticker covering it. Although we lose a playable feature here, I love that this toy now has it's name printed on the sticker on it's waist, like so many jumbos before it did. 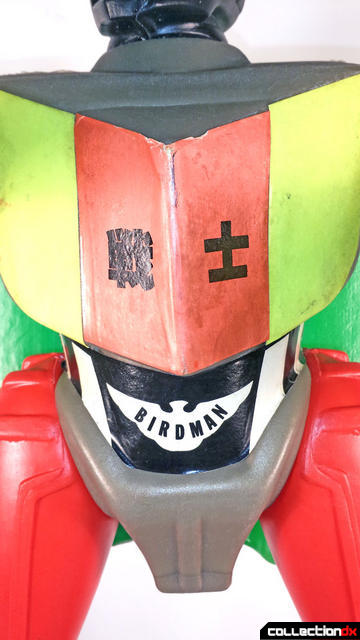 Lastly, although the nub on the handle of the sword is still there, the hole that it goes into on the side of the wings isn't. So you can't store it there the way you could on the original. 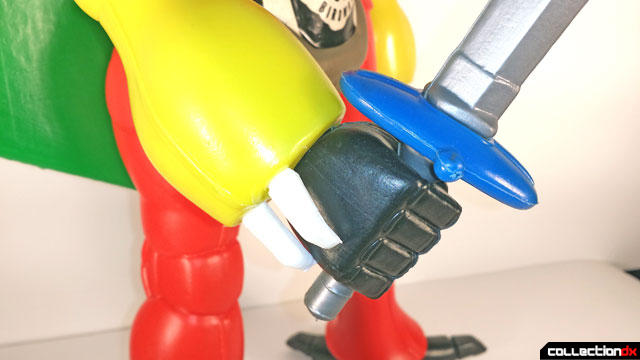 There's limited articulation (arms, legs, head and wings) but that's to be expected. The glory of this toy is to be found in it's funk, as well as just the simple fact that it exists and therefore gives us reason to continue to expect the unexpected. 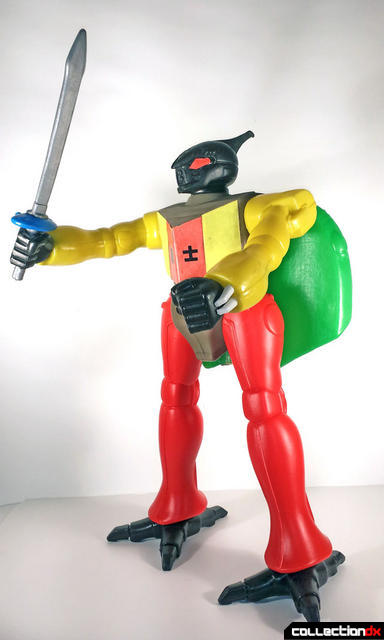 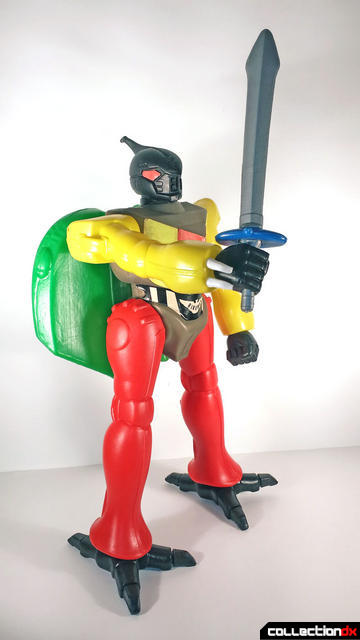 At first glance before reading the review I thought all of the parts came from different sources since it's a bootleg. Also, are "Jumbos" supposed to be super ginormous-sized gumball machine toys? That's what they all look like to me.

Just as I expected!

For I am MENTOK THE MIND-TAKER!