Armorhide comes from a rather interesting period of modern Transformers history. Though he came out in the second year of his mother series, he still belonged to the first wave of changes occurring in the Transformers toy franchise that started with Cybertron's Ignition. Mostly because at that very time Hasbro decided to turn the categorisation system upside down and renamed half of its existing size classes. Their reasoning behind this remains a mystery (old stuff with new name strategy, perhaps?), but it still resulted in Super becoming Leader, Mega becoming Voyager, and Basic, like the toy reviewed today, becoming Scout class.

Does this affect the toy itself? Absolutely not, I just thought you'd like to know why Cybertron was remembered by fans... putting aside quite decent screw up of the Japanese original on its way to USA and showering us with toys where gimmick dominated and sometimes crippled the robots carrying it. Will Armorhide prove to be another of these poor, selling point-victimzed characters? In my estimation, not at all. 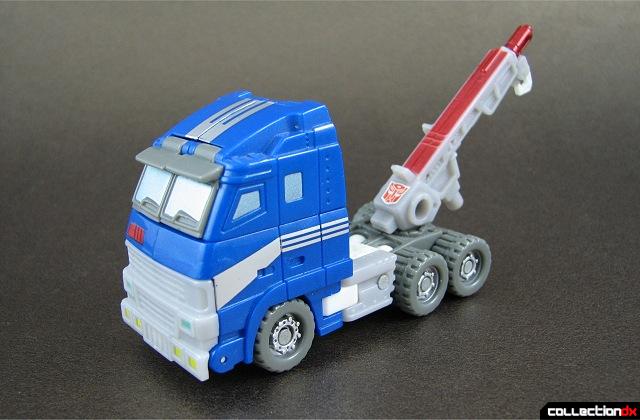 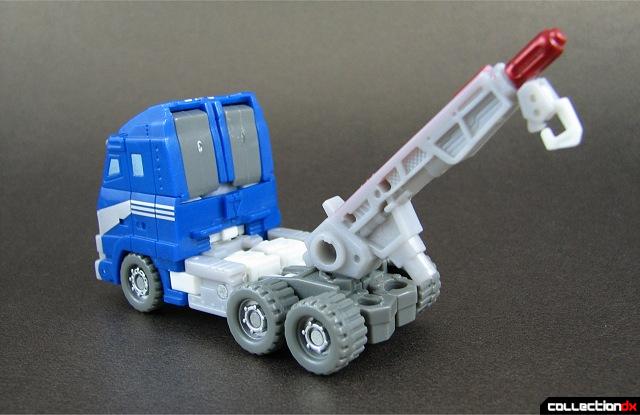 Armorhide, being a Scout class and an Autobot at that, transforms into a small, blue and grey trailer tractor with a tow/ crane assembly sticking out from its back. The paint job enriching the design is quite simple, but it succeeds in making this an interesting-without-pretentious vehicle mode. It's also quite clean in the robot kibble sense. The only Cybertronian elements you can see clearly are the firsts that form the back bumper, and even then you have to know what to look for when the tow assembly is attached. The Force Chip- the Cyber Key slot is also nicely concealed, which for me is a huge plus. Most of Cybertron toys have it accented enough that it's visible at first glance, and after my experience with Cybertron Downshift I preffer when my gimmicks don't scream "Hey, hey! I'm over here, quick, use me, do it now!". So yes, the first impression is encouraging enough. 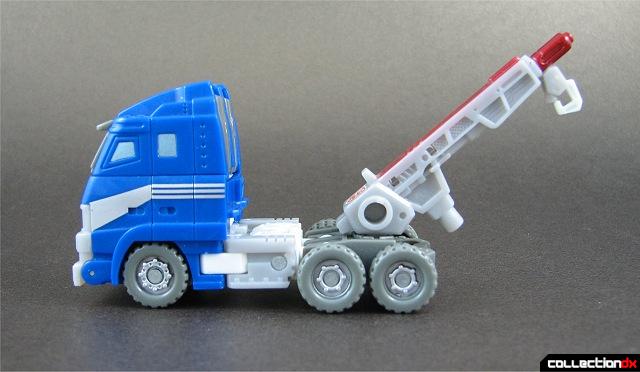 The side view is a delight. Very clean, with a clear distinction between the cabin / engine area and the trailer attachment area and more importantly, nothing hanging from the undercarriage. Not all truck-transforming robots have this covered properly. 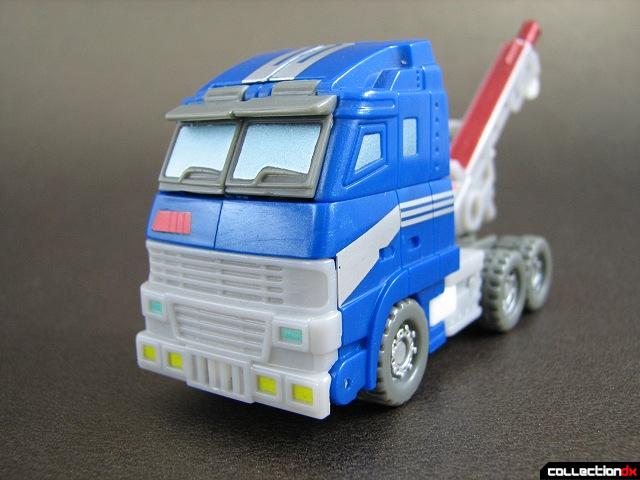 The front, especially the grill, have a decent amount of detailing, just the right amount to make it convincing without overdoing it. 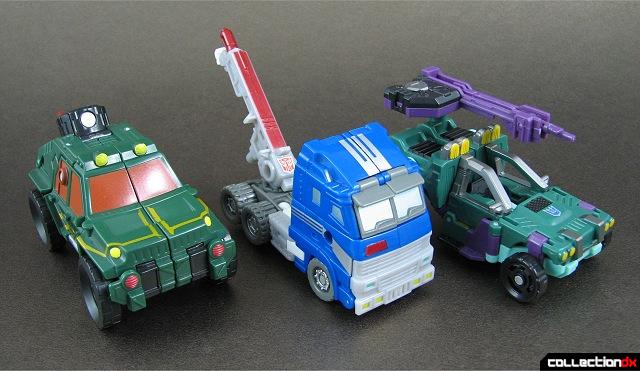 The Transformers will return after these vehiclee mode comparisons.
Armorhide looks nicely in scale with other Scout class toys, such as Overhaul (the green Wolverine-wannabe on your left) and Hardtop (right), whose gun shows what I meant with the blatantly visible gimmick switch. 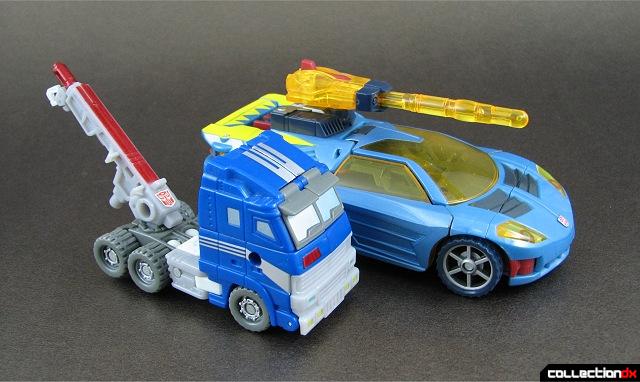 And here with the poster-bot Hot Shot (Deluxe version), who for some unknown reason is a favourite among Polish young fannette's, often appearing in creepy romance fanfics. Ugh. The less you know... 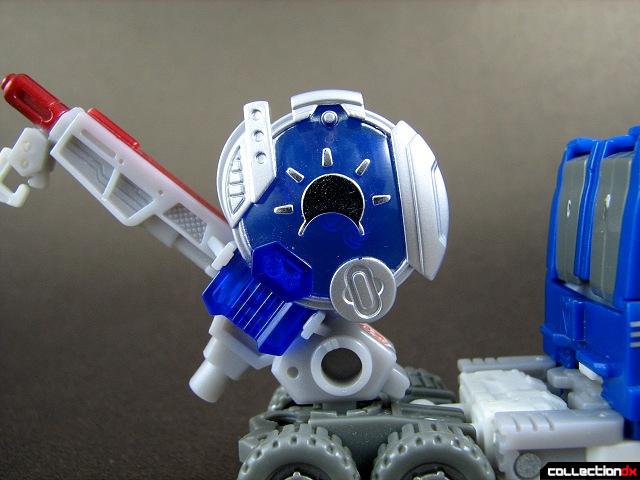 And now, Armorhide's Earth power Cyber Key, conviniently resting on a dedicated grip on the crane assembly. I like the clear blue plastic and the symbol, but the side details just don't tickle my fanside as much as, for example, Speed power Cyber Key ,that looked like it was wrapped in a car's dashboard, does. Oh well, the aesthetics of this object is secondary to it's main purpose... 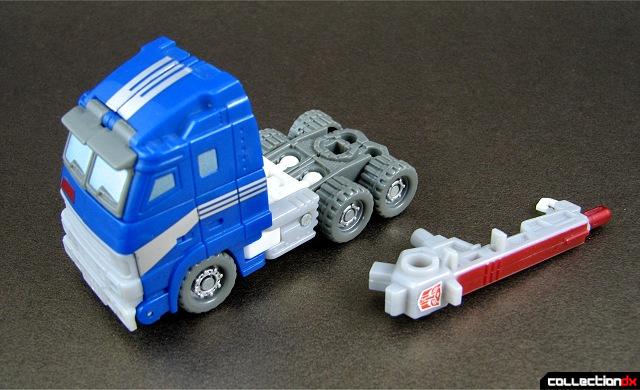 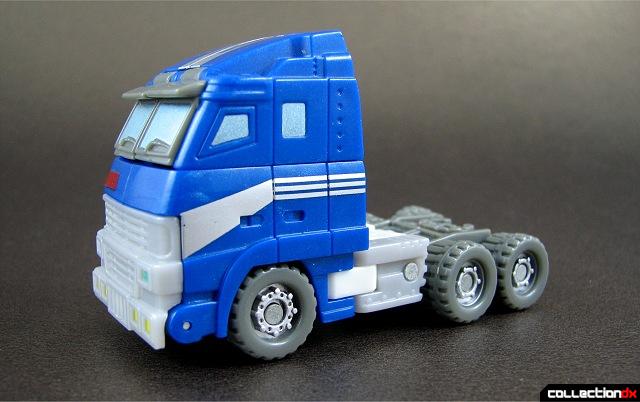 ...for which's sake I advise to remove the tow assembly. I'm pleased to say that the vehicle mode looks very nice even when presented bare-naked. 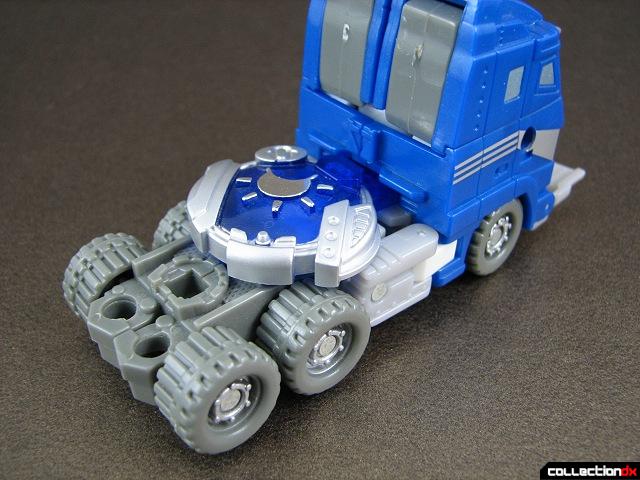 Anyway, with that done, the back gets enough clearence to let the Key slide with ease into its slot, mounted at the base of the cabin. Note how the Key does not stick outside of the main body mass of the vehicle. Another nice touch. 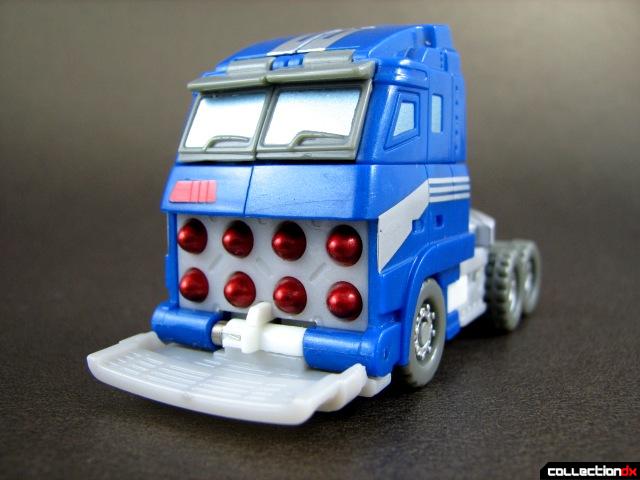 And what this does is to gift Armorhide with the coolest weapon upgrades among the Scouts - the grill flips down to reveal a lovely eight-tube missile launcher, ready to blow up anything that blocks it's user's paths, be it evil Decepticons or evil toll booths on the highway. And it's all internall too, something not seen too often in a class where the Cyber Key is 1/3 the size of the figure itself.

Now we can switch to robot mode without any regrets. 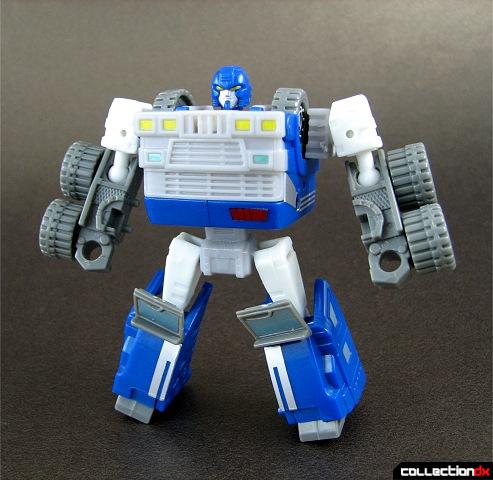 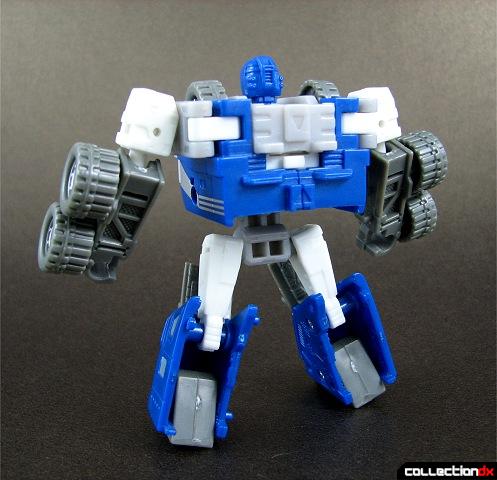 The robot mode is a real bulk, being barely taller than wider, creating a feel of a powerful brawler who will get the job done manually and with with excessive force. If this guy ever got transferred to IDW G1 comic setting, I could easily picture him as a security officer abord the Lost Light and Ultra Magnus' partner in maintaining order.

He would also do a nice redeco for Huffer, which he actually did for the Botcon Timelines continuity. 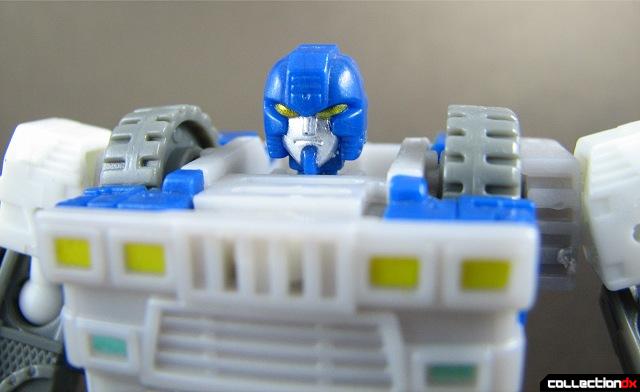 Armorhide's head is on a ball joint, and despite its small size, it's full of character, even if it does no sport all that much detailing. This guy is bemused and he'll be more than happy to demostrate his mood to any troublemaker in sight. Also, I wonder whether I should treat his chin guard as a goatee. I'd preffer not to. 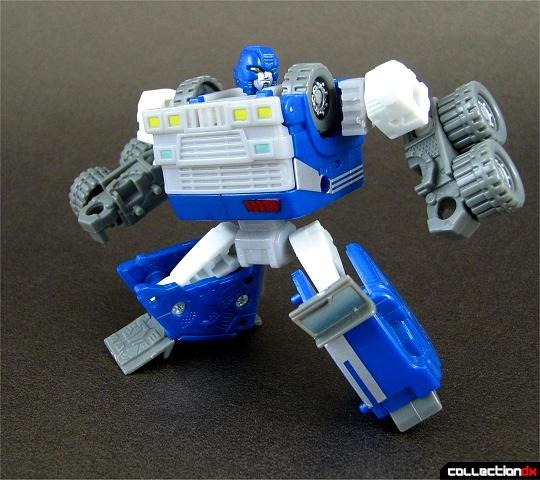 Speaking of joints, this little guy is quite poseable, with balljoints at elbows and hips with other bendiing points handled by decent swivels. Though I will admit it's the articulation that is my main "but" against this toy. Firstly, the arm swivel has too small degree of movement, making it impossible to fully lift the arm up to the side. But more importantly, the knee swivel is just bad. I'm not expecting technology such as legs with side-swivel on toys of this size, but the way Armorhide transforms (upper half of the truck cabin slides out to sides on the same joint that bends the knees) leaves him with quite loose knees. I have this guy for six years and it's not too bad yet, but some people might transform him a lot more than I do, which means the risk may be much higher for them. 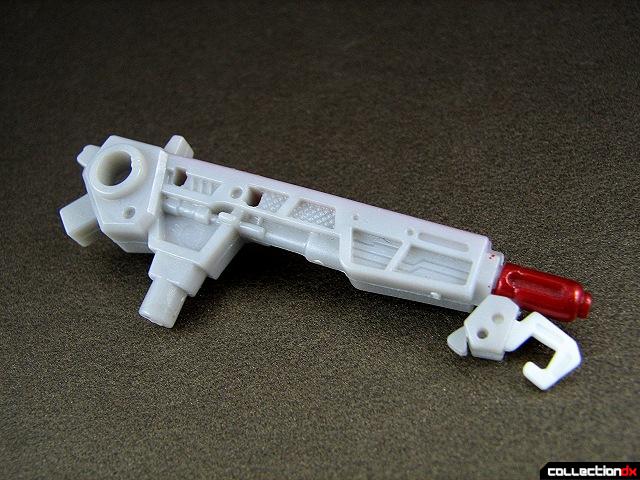 This is not going to be a surpise. The crane attachment is actually Armorhide's gun. And aside from the hook that sort of spoils the look of the barrel, it's a nice, simple design, too. I even sports a 5mm weapon port on each side. Neat! 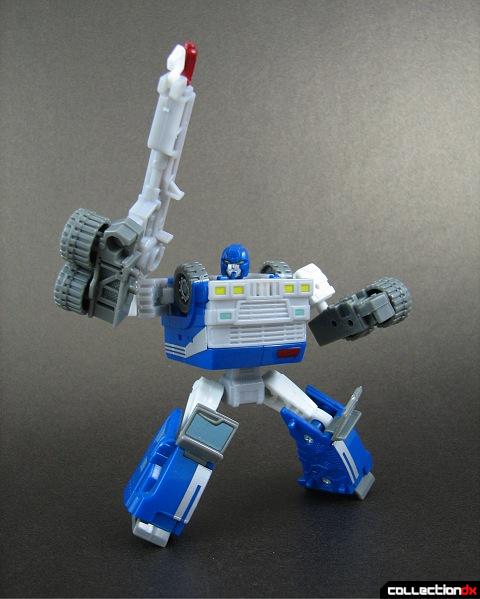 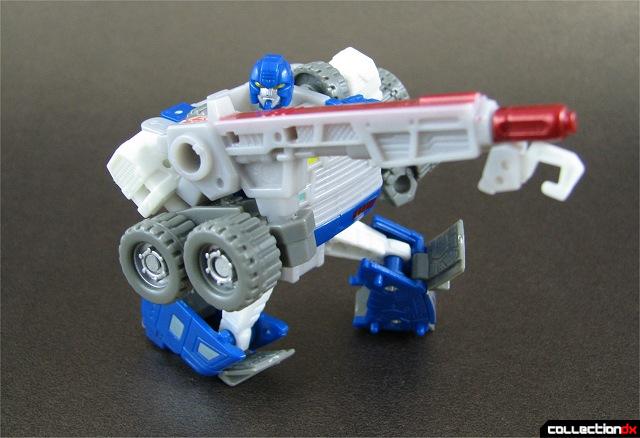 I'm happy to report that despite the joints I mentioned before, adding the gun to the picture boosts Armorhide's posing qualities +10, and making him looks badass is not very hard. 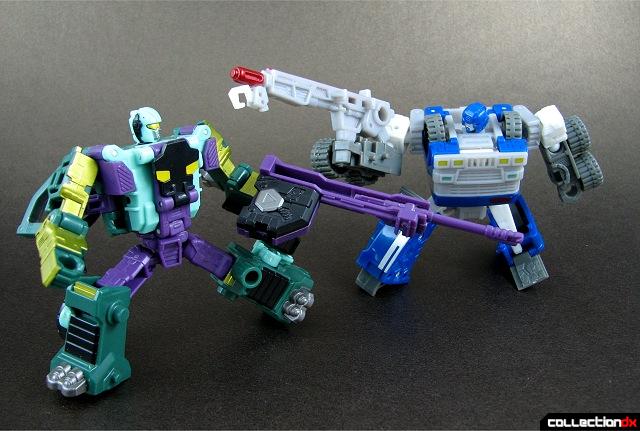 Too bad I can't say the same of some other robots... maybe I'm not trying hard enough to make Hardtop look like he's standing at least a slim chance... 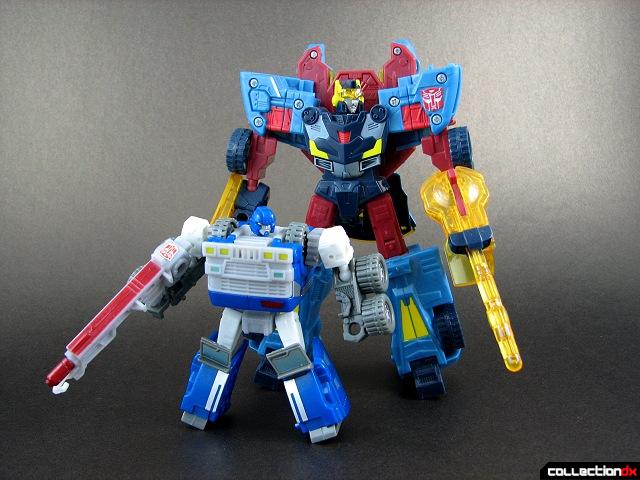 Armorhide also works nice as appereance improver for more articulation impaired robots such as Hot Shot. I like the guy for his looks, but seriously, not for his poseability. 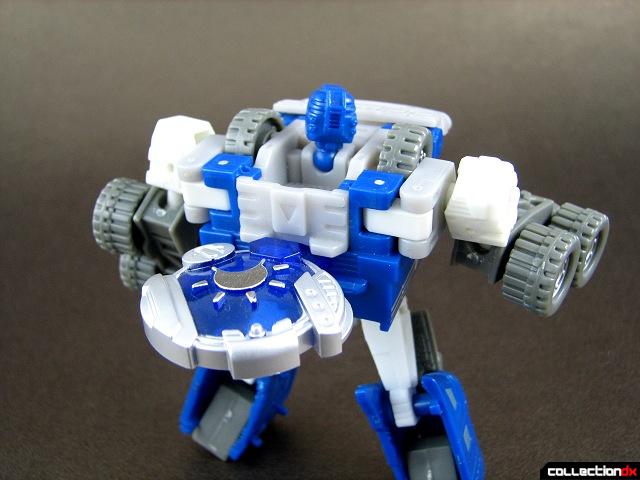 The good thing in this toy is that the Cyber Key gimmick works for both modes (and makes sense in both, at that). Just insert the ket to the same slot as in vehicle mode. 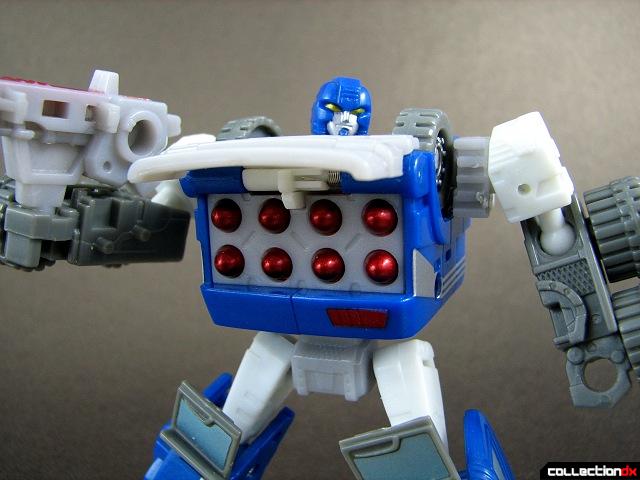 This makes Armorhide a walking pocket tank who overcomes the annoying issue of many other Cybertron toys that is NOT having any weapon aside one activated by the gimmick. Ransack, Override, Breakdown, Dirt Boss, Crumplezone, I'm looking at you.

After all is said and done, Armorhide performs really well as a single toy. The articulation is hindered due to wrong design choices, but otherwise I'm really satisfied with him. The vehicle mode is clean and simple, and the robot mode is a first-sight-brawler, something hard to convey in this size class. But what is by far the best is how the Cyber Key gimmick is handled. In many toys from Cybertron it dominates the design or makes it party senseless, like the mentioned only-weapon syndrom, or worse, when the toy could easily do without the gimmick at all.

Armorhide both manages to make the gimmick internal (instead of being attached to a add-on weapon part) without sacrificing the look in any of the modes, AND to make it fun and eyecatching rather than just being there. Flip out blades? Fine. Two more barrels to yor gun? I suppose. Eight-tube missile launcher that works in both modes and looks badass at that? I'm sold.

So yes, you can tell I like Armorhide, even up to the point of placing him among my favourite Cybertron toys. If you can get him, unless he's ridiculously expensive, do get him. He's worth your money and shelf space. 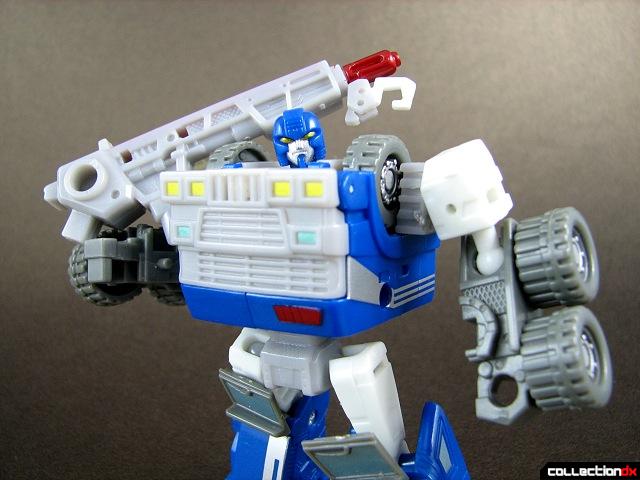 2 comments posted
Yay, this is one of my

Yay, this is one of my favorites! I loved Cybertron, honestly. That was the toyline that got me back into Tranformers; before that I was paying attention to Beast Wars....so you know, it had been a long time. Cybertron, for me, was when they finally started making the robot modes with some real articulaton without having the vehicle modes suffer.

Anyway, this guy was fun, simple to transform, and I love his little missile chest feature. All around great toy!

Once in a series comes such tiny-badass combination. I wonder why I´ve never seen him in Knock-off land as a Prime.