Kids Logic is expanding their Cosmos Burning Collection line, a series of fixed pose statues based on the characters from the Saint Seiya series, with the addition of the Gold Saints into the line. As guardian of the first of the 12 houses of Athena’s Sanctuary, Aries Mu is the obvious choice for the first Gold Saint entry into the line.

The Cosmos Burning Collection captures the Saint Seiya characters performing their iconic moves. The guys at Kids Logic have chosen to pose Aries Mu performing his Crystal Wall technique. During the Hades arc of the Saint Seiya storyline, he fends off two revived Gold Saints using the power of his Crystal Wall. This wall of energy, that can reflect the attacks of any enemy, is as strong as Mu’s resolve to serve Athena. 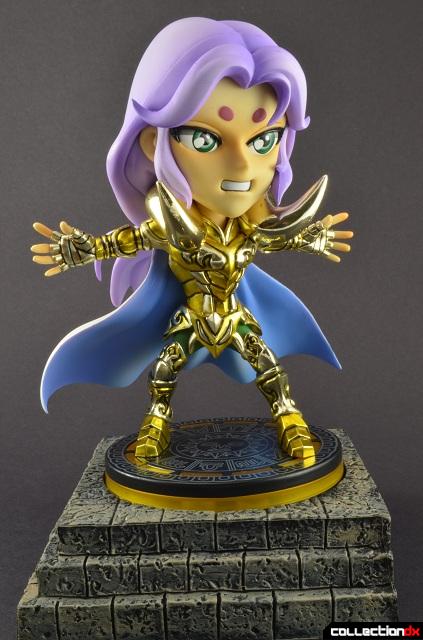 The Crystal Wall techniques is the first of Mu’s fighting skills to be ever revealed. Up until that point, Mu was mostly a support character in the series. When the Bronze Saints embarked on their journey to traverse Sanctuary in order to save Athena’ life, Mu did not stop them. Instead he repaired the damage that the Bronze Saints' Cloths had sustained in their previous battles. Mu is portrayed as a wise man for actions he takes in order to help the Bronze Saints.Had he not been wise enough to figure out that the Pope was not the holy leader of the Sanctuary, Mu could have easily stopped the Bronze Saints before they got the chance to take a single step into the 12 Houses. This is even more evident when Aries Mu unleashes his Crystal Wall technique on the not-so-welcome specters of Hades because it becomes obvious that Mu is a deadly combination of wisdom AND power.

The packaging for the Cosmos Burning Collection Aries Mu is quite impressive. 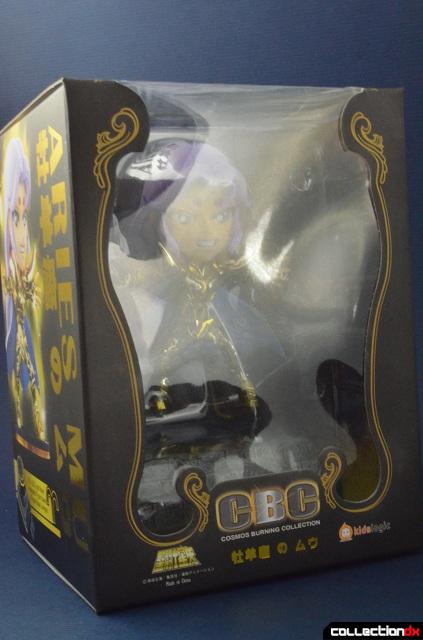 It not only has size presence, but is also made of quality materials. 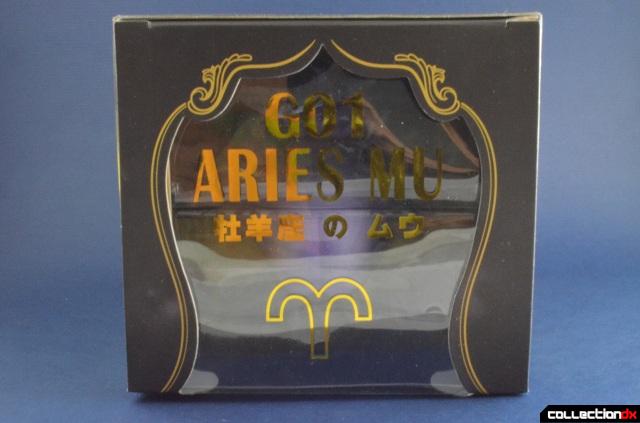 All of the sides of the box are also very nicely decorated. 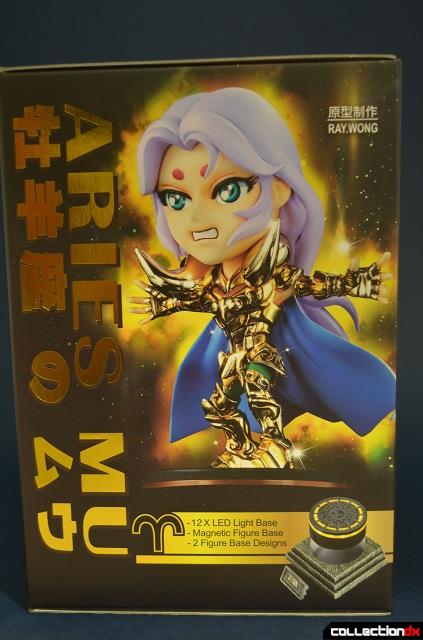 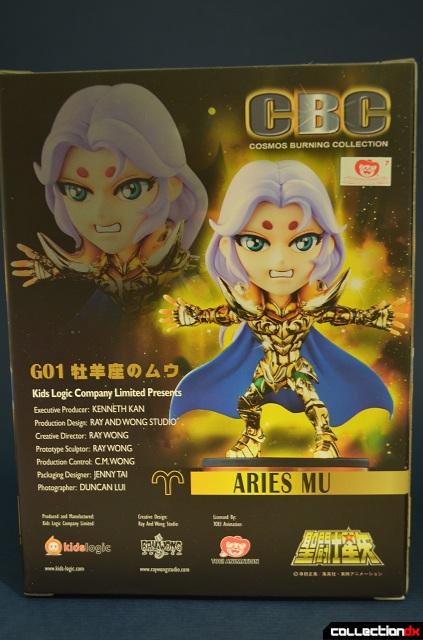 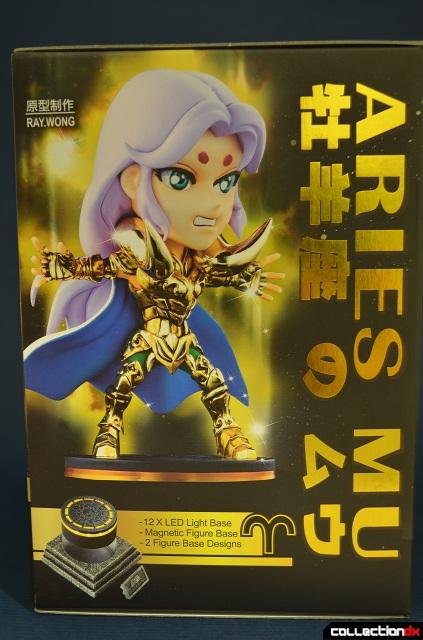 Kids Logic has done an awesome job balancing the detail of the character, his golden Cloth, and the Super Deformed style. 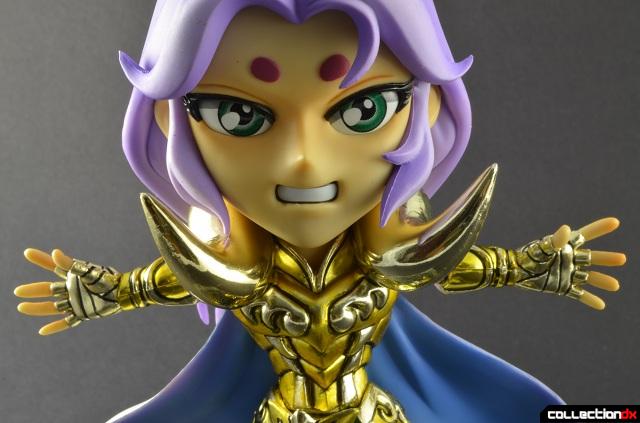 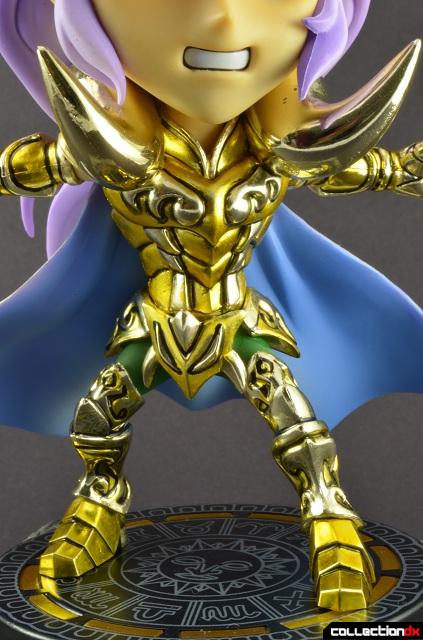 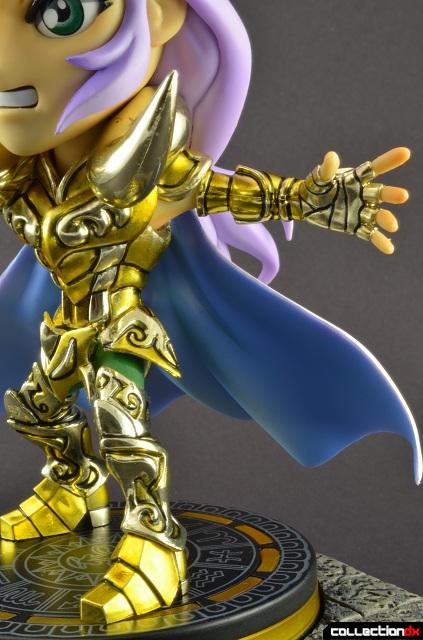 Although smaller in scale, the Gold Cloth of Aries is rendered pretty faithfully to the series, down to the cape which flows backward as Mu unleashes his Crystal Wall technique. 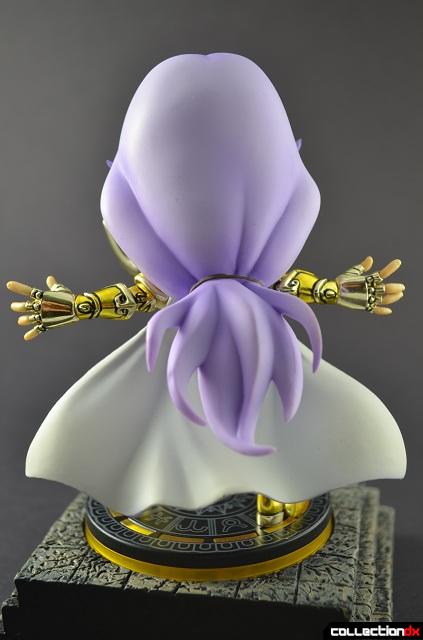 Overall the figure oozes good quality. The design and paint apps are freakin’ gorgeous; even on the parts of the armor that are hidden by the cape are present, which could have been an easy corner to cut. 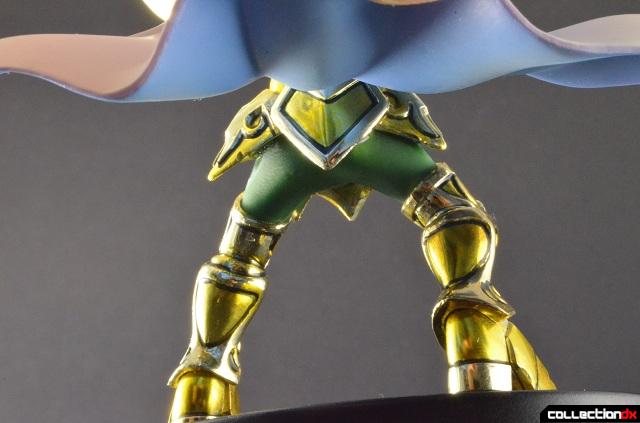 I did, however, have two minor issues with my figure.

First, while the horns on the Aries Cloth are really well made and gorgeous, rivaling the clean, shiny look of the original Saint Cloth Myth Mu,  there were a couple of black spots on the inside of the left horn. 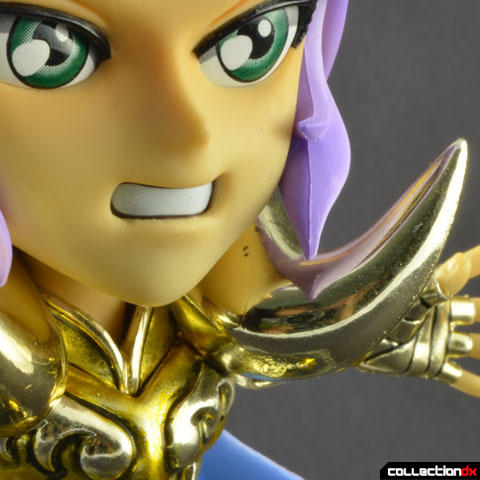 Not the kind of thing you would notice from afar, but easy to pick up on as you take in the beauty of this piece from close up.

Second, the middle finger on the right drooped down toward the index finger, making it look Mu was throwing down a gang sign. This is obvious in a few of the shots that were taken before I pulled the finger into a better position.

The Cosmo Burning Collection figures comes with a special stand. Inside the stand is a base, which has a metal surface to anchor the figure to the base via two small magnets on the soles of the figure’s feet. The designs on the top of the base are the twelve signs of the Zodiac around the sun. Fans of the series will recognize this design, as it is similar to the one featured on the fire clock in Sanctuary. 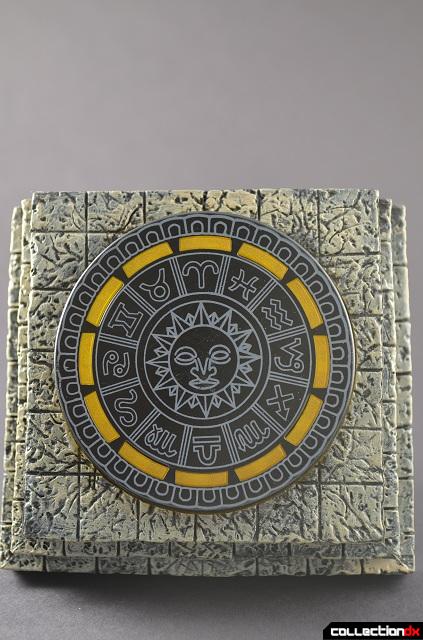 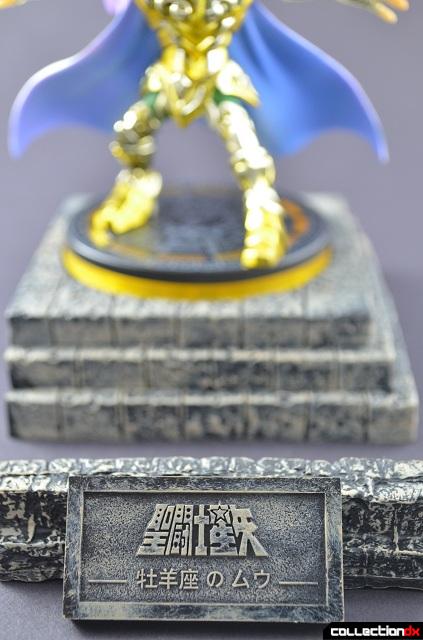 Another neat feature of the base are the twelve LED lights it containes which can be used to illuminate the figure. 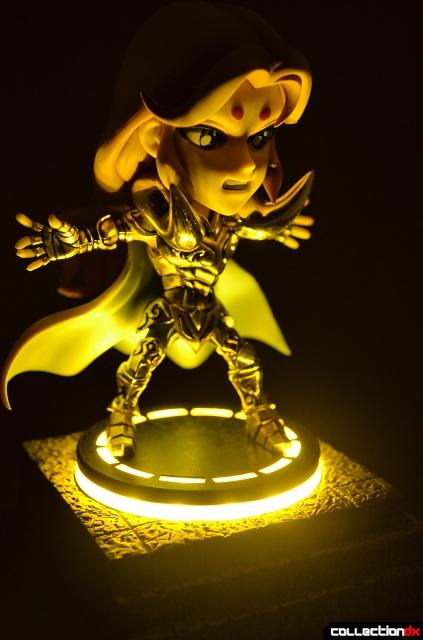 This is another great Super Deformed Saint Seiya  statue from Kids Logic. I cannot wait to see how they pull off the rest of the Gold Saints, especially Aquarius and Libra, since they are two of my favorites.

2 comments posted
Excellent photos of a

Excellent photos of a photogenic piece, love the brightwork on it. Cool review

Thanks! I love it when toys are pretty and easy to shoot. It makes my job easier.