Finally making his appearance as the third release in Sen-Ti-Nel’s Tatsunoko Heroes FightinGear is Ken the Eagle of the Science Ninja Team Gatchaman. Simply called Gatchaman G1 on the box, Ken the Eagle shares the modern interpretation of his classic costume that others releases have shared. I’m not old enough to have seen Gatchamans original airing in the US, but I do remember watching G-Force after school on Cartoon Network and not understanding it was called something different in Japan until I think I saw a trailer for it on some other Anime VHS I rented from Blockbuster. I don’t really have as much attachment to the series as older fans but I did enjoy watching it as a child and most of my interest in the series is probably thanks to playing Tatsunoko Vs Capcom. 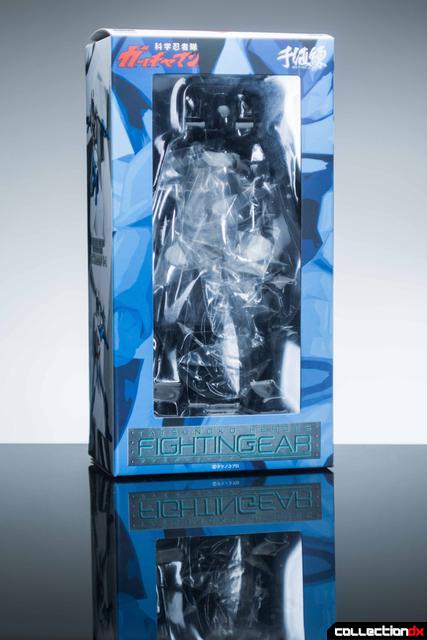 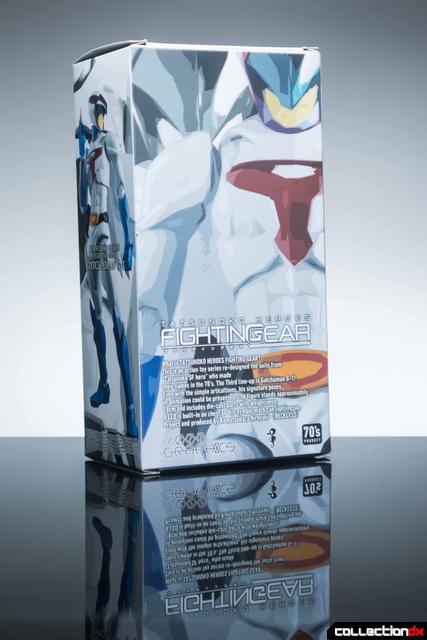 All the Tatsunoko Heroes FightinGear figures seem to come in the same style packaging featuring a large window in the front and short blurb in the back. It’s got some stylized imaged of the figure but its pretty average in terms of packaging. 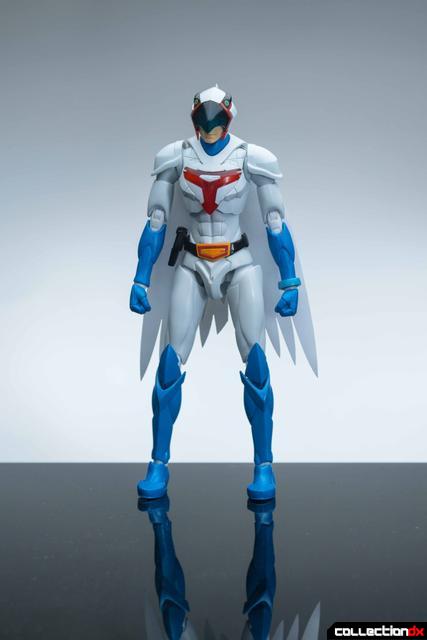 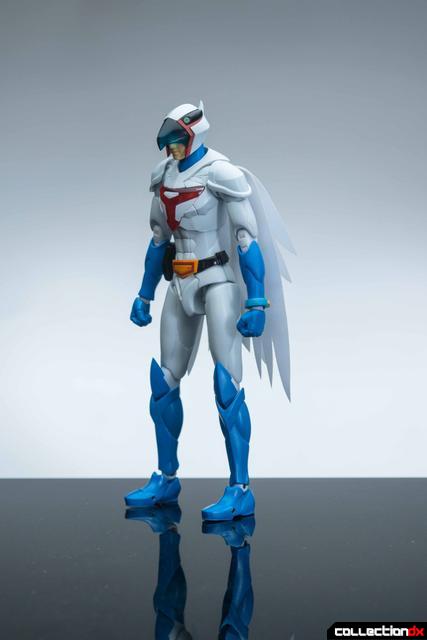 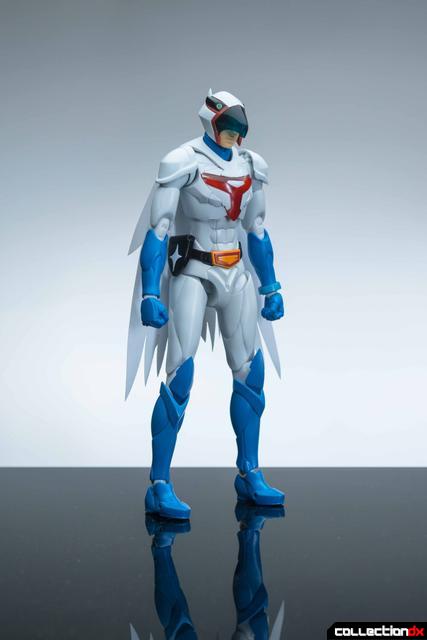 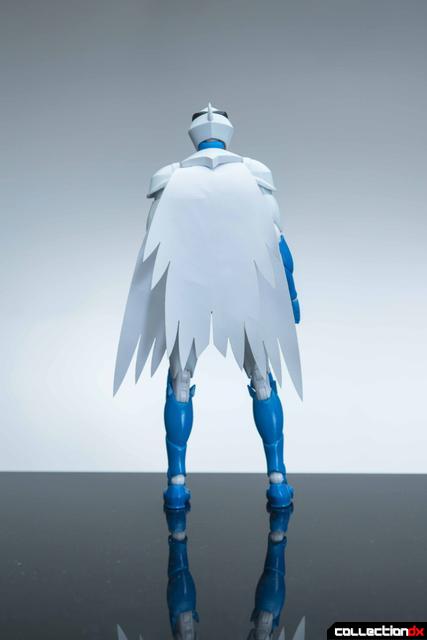 While the updated design is still very obviously Gatchaman and retains the bird aesthetic, the suit looks much more like some type of modern combat armor than the old form fitting costume. The figure features quite a bit of diecast in the lower legs and body but this is one of the few times where I would have preferred for a figure to not have any metal content. Like the Hurricane Polymar, Gatchaman G1’s feet are still a bit of a floppy mess due to the weight of the figure and the metal content is actually making the figure worse. There is also a large thigh gap exposing the t-bar in the hips. It’s not a deal breaker, but it does take away from the figure by exposing the hip joints. You can alleviate this a little by rotating the upper ball part of the legs, but it still doesn’t entirely cover the gap.

I think the design is pretty cool looking for the most part except for the cape. Gone is the large flowing cape with the red inner lining, replaced with two ‘wings’ and a ‘tail’ made of polyester. It sort of makes sense that a combat armor would have some sort of lightweight material for a cape, but I don’t think it looks that great, and I’m constantly afraid it will rip or stain somehow. My biggest gripe with the cape however, is that it takes away any ability to pose it dynamically without using some sort of blower. A wire cloth cape or hinged plastic cape would at least allow the figure to have some cool cape poses instead of it always hanging contoured to the body. 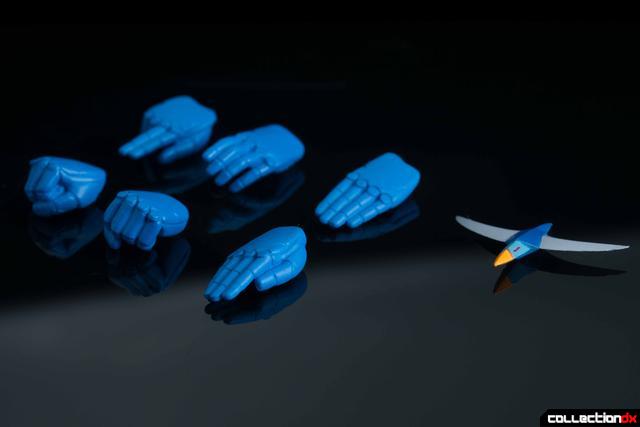 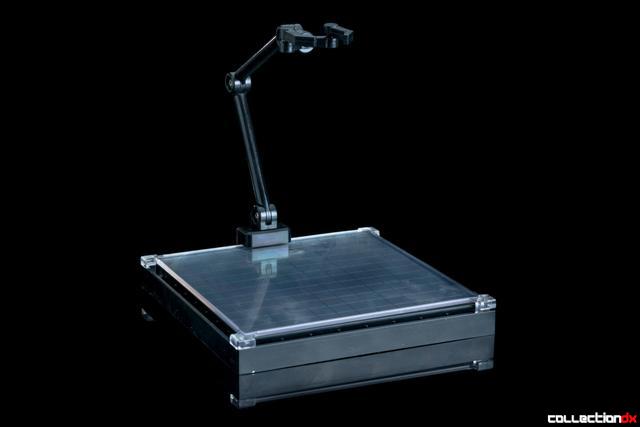 The typical Sen-Ti-Nel stand is included, but it doesn’t work too well because the figure is so heavy. Getting a right balance with aerial poses is difficult using claws; even if you manage to have the figure balanced so the stand won’t tip over, you still have to deal with the weight of the figure causing it to rotate. Trying to pose the figure on the stand was incredibly frustrating and irritating. Accessories are also very sparse, with only 7 hands (I forgot one in the photograph) and birdrang. For such an expensive figure, I would have at least expected the sword and gun to be included. 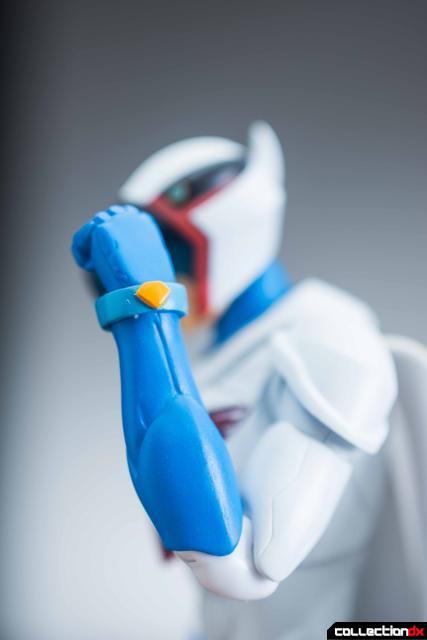 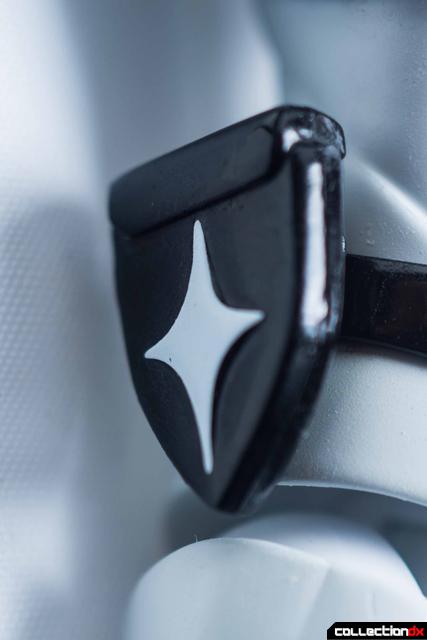 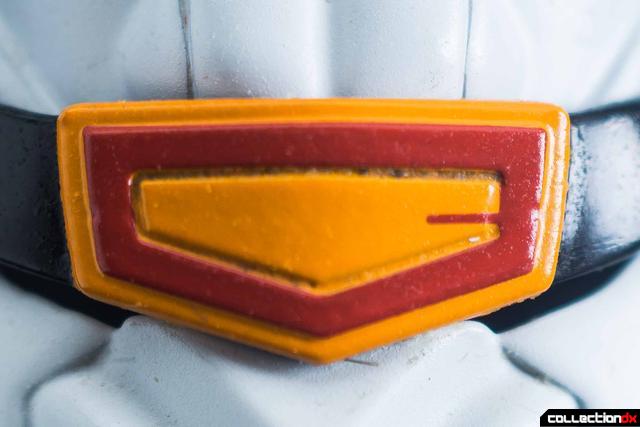 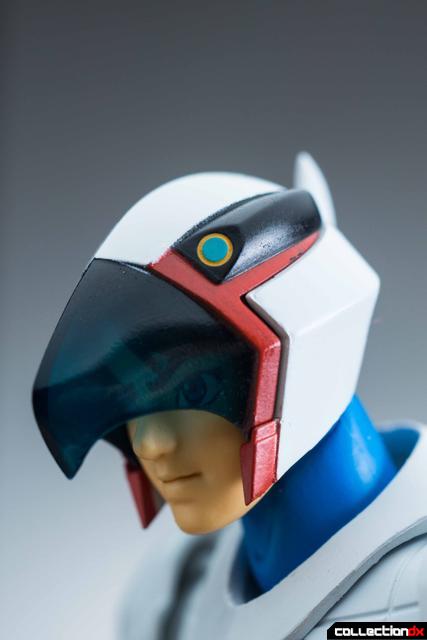 Detailing on the figure is very good, with a translucent beak and well painted eyes underneath. The utility pouch can rotate for some random reason and the wrist communicator is a separate piece which can be removed from the arm. 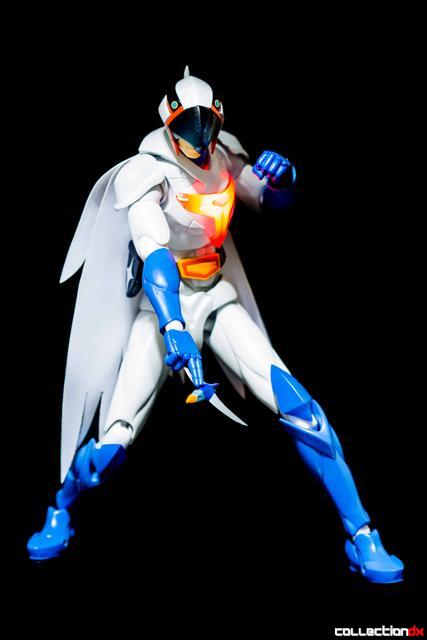 A switch on the back lights up the large Gatchaman symbol on G1’s chest. The LED is bright but difficult to photograph using flashes. It’s a neat gimmick but one I tend to just take out all the batteries in my toys for fear of corrosion. 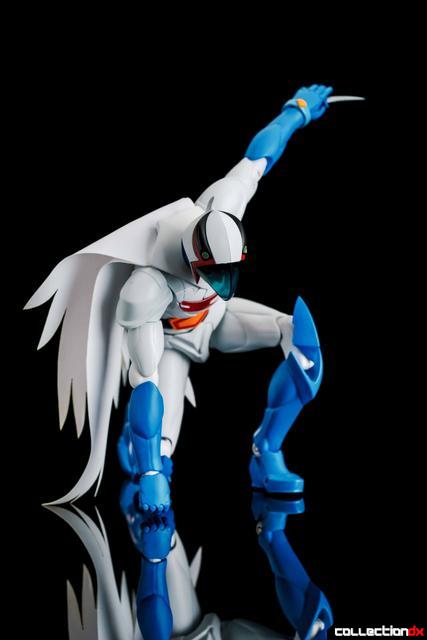 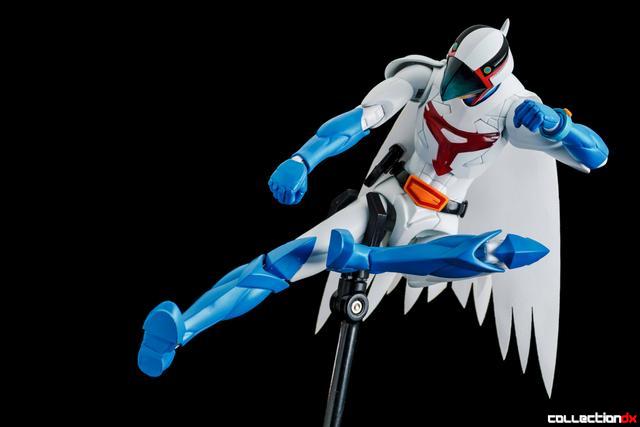 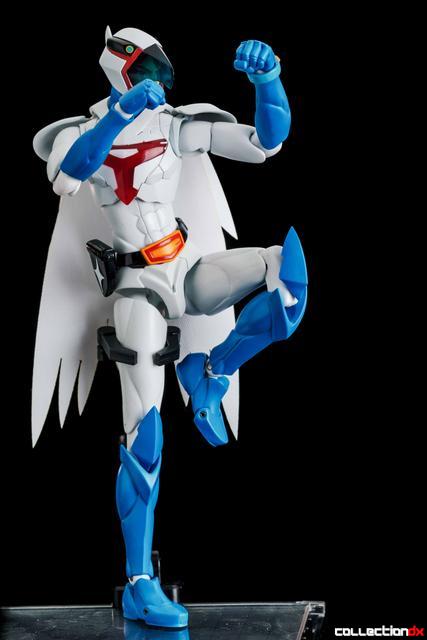 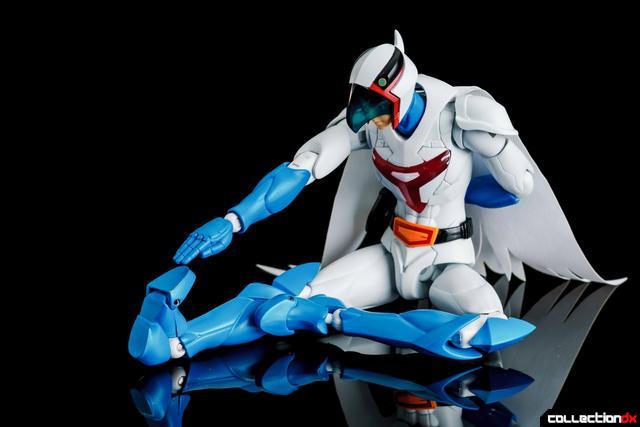 Articulation is pretty good, with joints in all the right places. Unfortunately the loose ankles make trying to get a good pose very difficult without the figure toppling over. This is further compounded by weight due to the diecast parts. Even with the stand, I felt like I could never get the figure in the pose I wanted and just made a bunch of compromises. This does bring one other small issue I have with the Sen-Ti-Nel stands. While they do look great, the claw piece has a bunch of notches in it to prevent it from rotating. This makes sense with the company’s use of diecast in their figures so it won’t turn over, but it also prevents you from making micro adjustments to rotate the claw that’s often necessary when posing a figure. 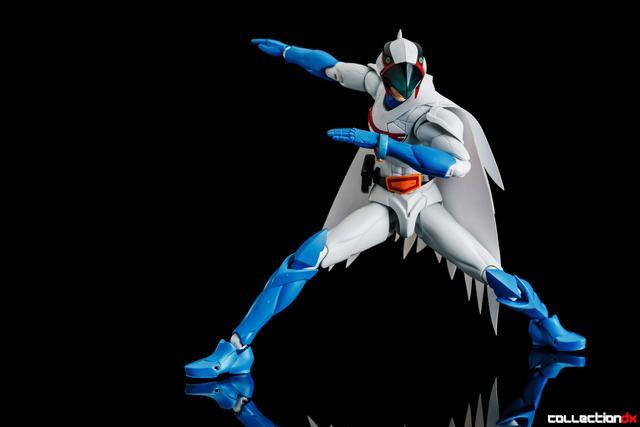 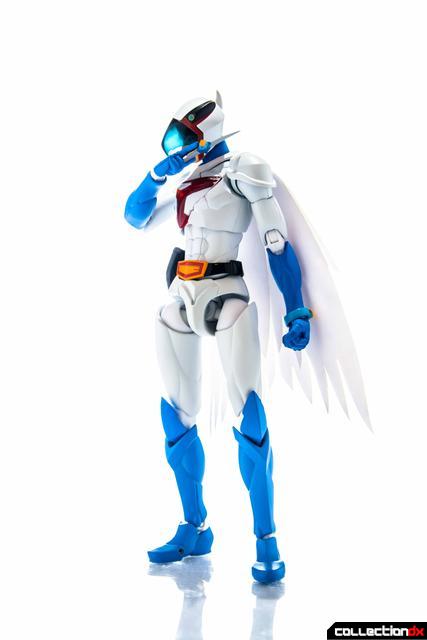 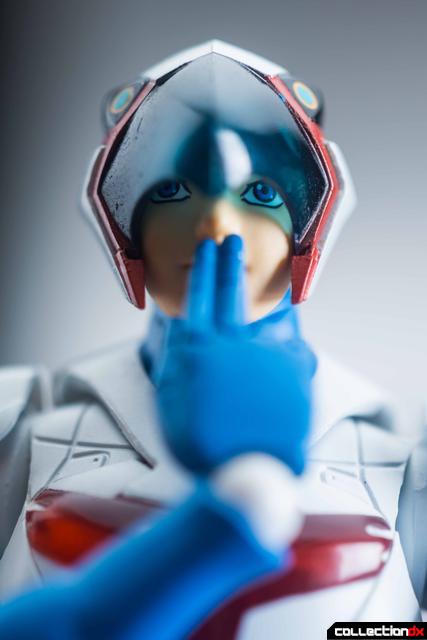 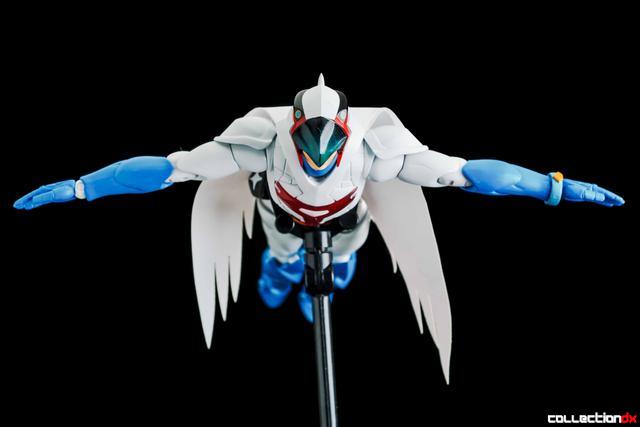 I’m pretty conflicted with Gatchaman G1. It’s a great looking figure that suffers from weird design choices that basically sum up every issue I have with Sen-Ti-Nel. Everything they design is really awesome yet really hit or miss and way too expensive. I understand everyone loves diecast parts (I certainly do) but the only thing it’s doing is making the figure imbalanced and causing the already loose ankles to become looser. At 8424, it’s about twice as much as a Figuarts while feeling inferior in every way.  I usually love photographing figures but all the issues kind of add up and made it really frustrating trying to get some cool shots I had. The figure isn’t terrible, but it really doesn’t feel anywhere like an 8000 yen toy either. Even if you ignore the actual faults in the figure, you are paying quite a premium for a figure that has fewer accessories than the Microman version. Unless you are a huge Gatchaman fan, I really wouldn’t recommend the FightinGear line. At the very least, I would say wait until these go on clearance.

2 comments posted
This review is bittersweet to

This review is bittersweet to me.
On the one hand, it proves my Polymar isn't a lemon; on the other hand, if they can't get Tatsunoko's titular and most popular character(s) right then this line is truly dead with no intent to get better. I suppose all we can hope is that the Miracle Productions x BU Toys ACTION IN METAL figures of Casshan and Tekkaman will do better.

I was looking forward to these figures too, because of my experience with Tatsunoku vs. Capcom. Oh well, money for other toys I suppose. And yeah, if nothing else, G-Force is memorable for that theme music, which was used almost all the time.