The 2014 anime Majin Bone is the story of five brave young men destined to fight against mysterious aliens. To battle the invaders, our heroes are given the powers of Earth's creatures in the form of cards. It might sound like a stale premise, but it's a great series with some spectacular designs. Today's review is of Shark Bone, the hero team's veteran leader, brought to life as a model kit from Bandai. 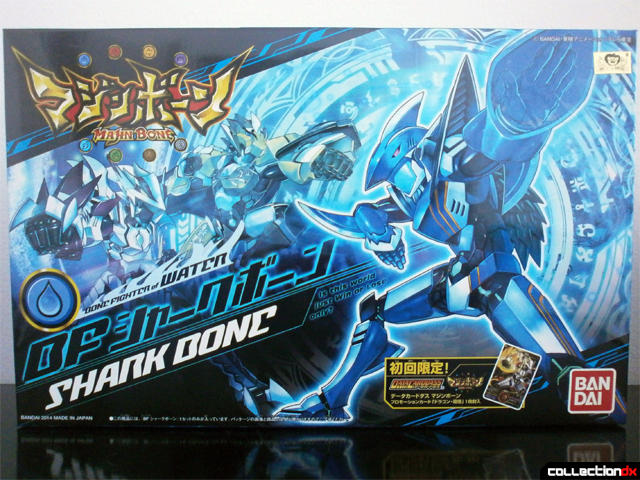 The box has some great art, with Shark accompanied by his fellow Bone Fighters Dragon and Leo. 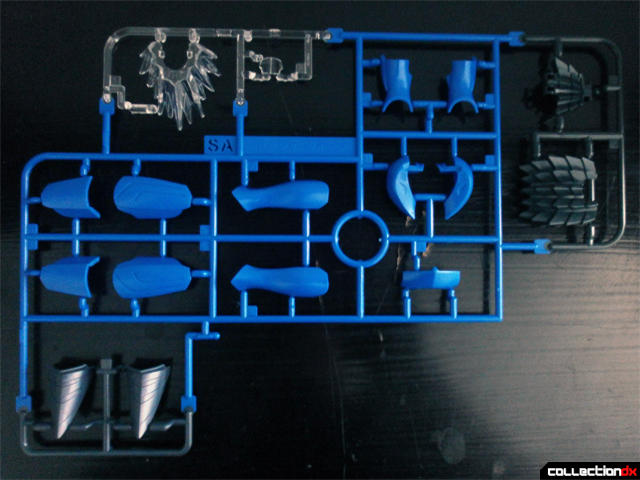 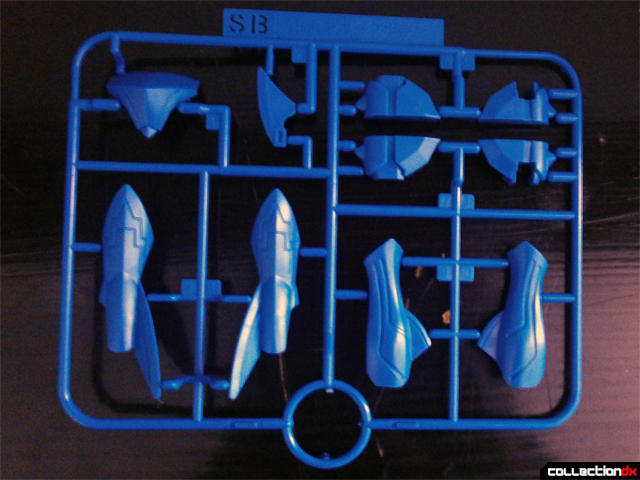 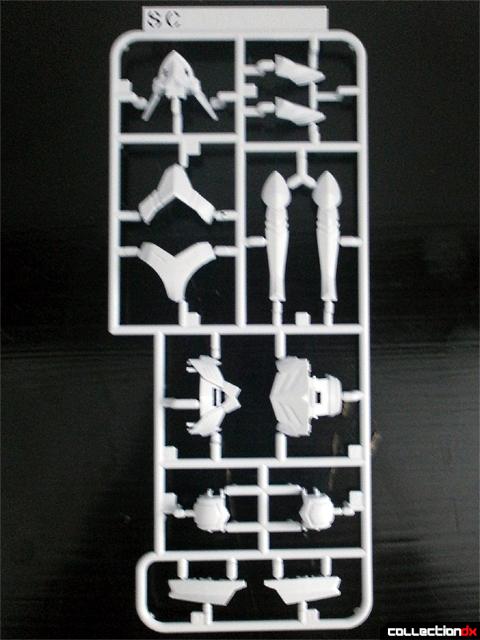 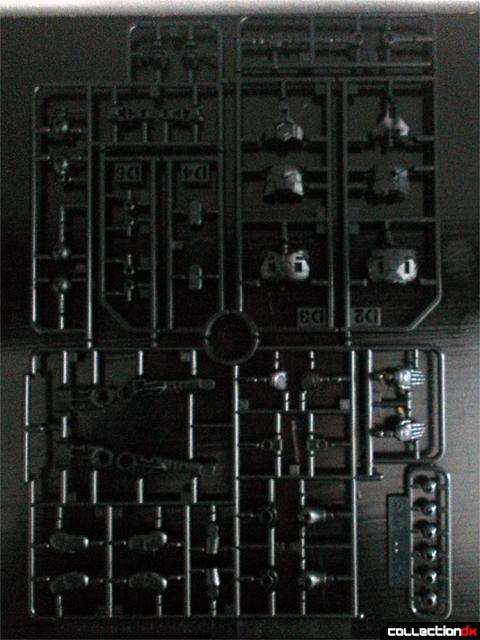 The kit has four normal trays of parts, and one more with polycaps. The parts require no tools to remove from their trays, so it's perfect for beginners. 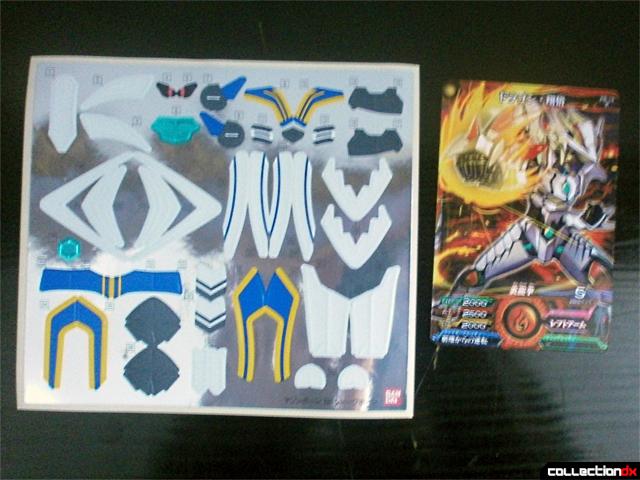 I'd still recommend having a tool to help apply the stickers, of which there are many, and maybe a hobby knife to shave down the leftover marks from the removed pieces. The kit also comes with a trading card of the main hero, Dragon Bone. 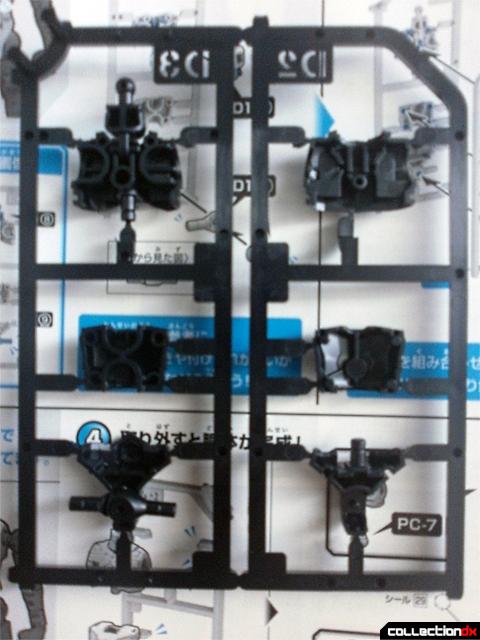 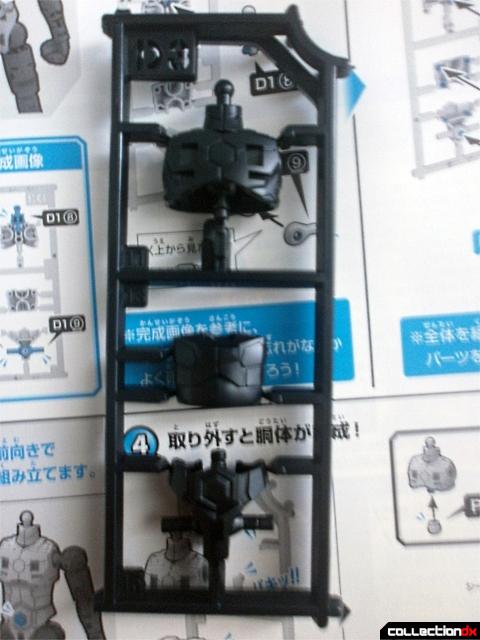 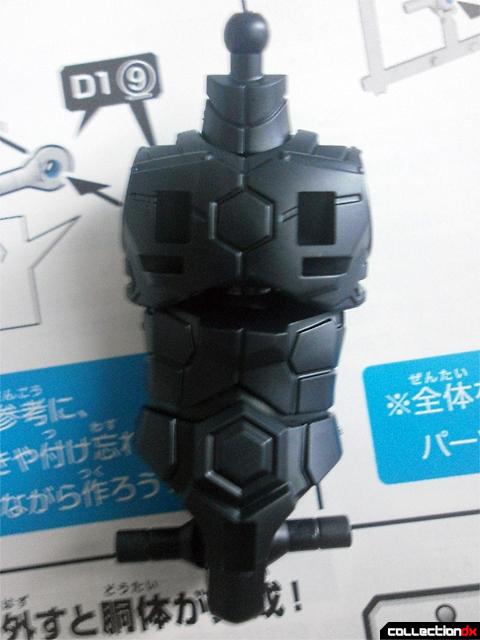 The entire D tray forms the skeleton of the Bone, and the parts from the other trays attach on as his armor. The D tray breaks into several smaller trays, which fold over to form the torso and limbs. It speeds up the build in a fun and interesting way, especially since this innovation hasn't been used in any kits since the original Victory Gundam models. 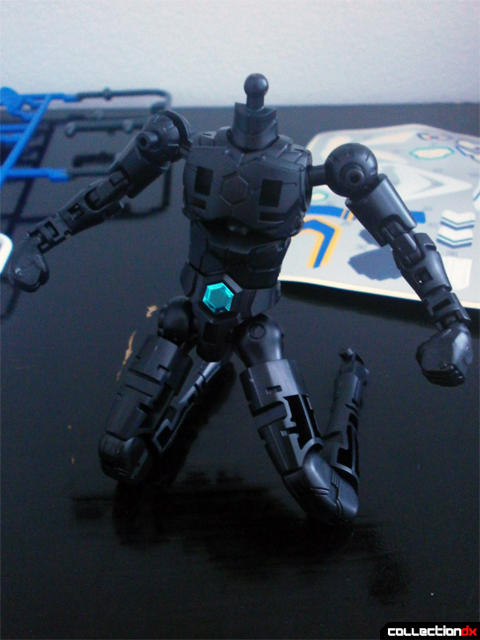 The completed skeleton. It has incredible articulation, but it's hard to show that off because it has no feet. Once the armor is put on that flexibility is somewhat hampered, but it's still above and beyond most other kits in this size and price range. 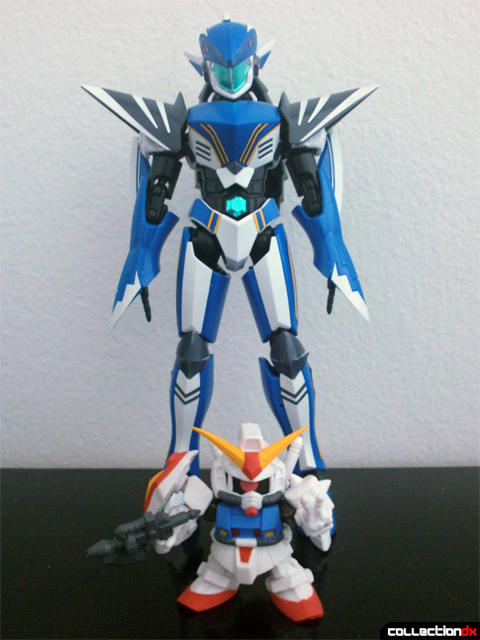 Fully assembled, Shark Bone is about the same height as most High Grade gunpla. My application of stickers wasn't perfect, but it's still a good-looking figure. 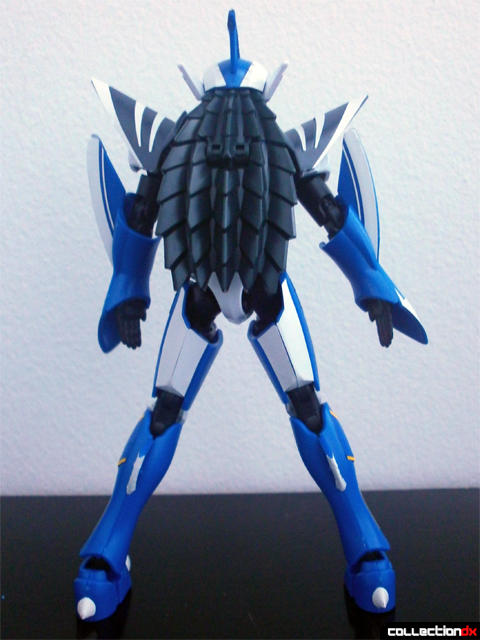 From the back you can see his hair, made of two pieces so it has some flexibility. 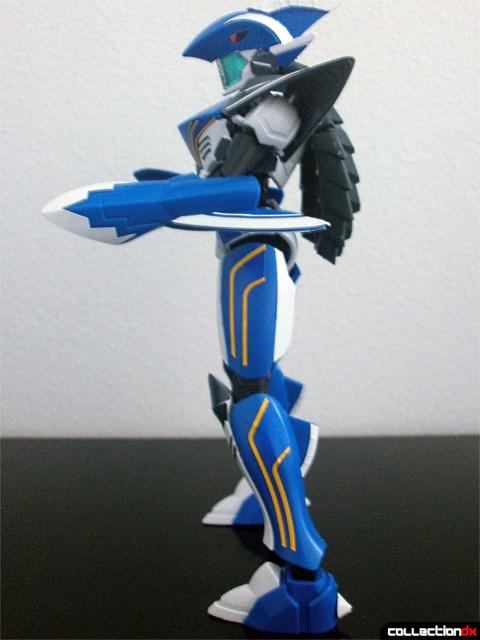 From the side, it's easiest to see the shark profile. 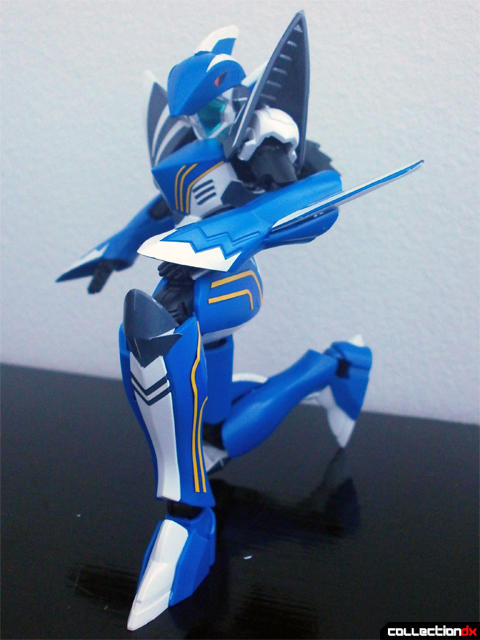 The fin on the back of his lower leg is the largest hindrance to poseability, but Shark Bone can still kneel. 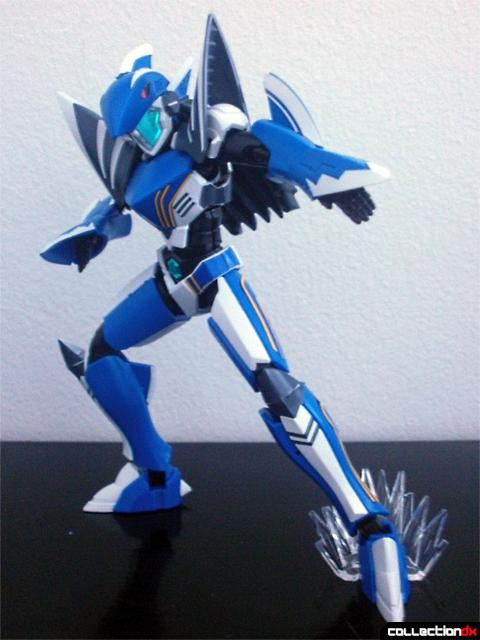 This kit's only accessories are an alternate flat set of hands and an effect part that goes onto the feet. I'm not
completely sure what the effect is supposed to be, but it's a nice addition. 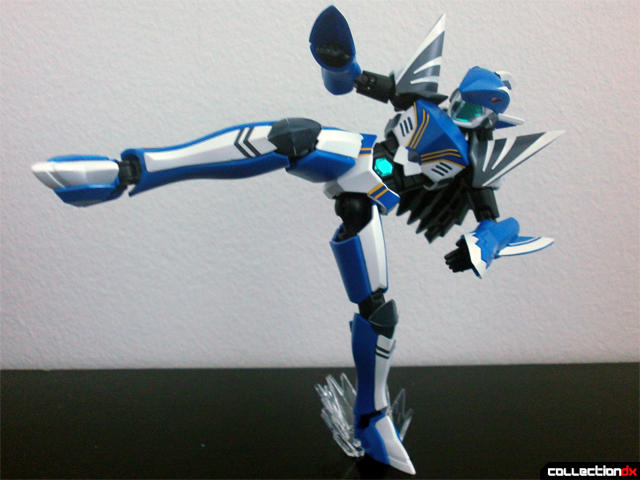 Although if you don't have a display stand, the effect part makes one-legged action a lot easier to pull off. 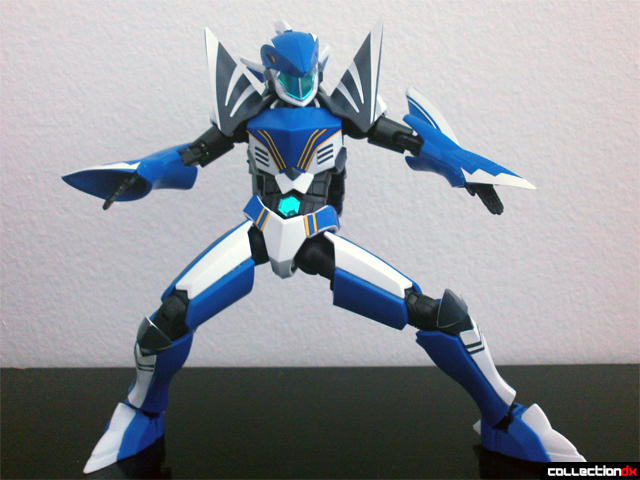 Shark Bone is just a joy to play with, he looks great no matter what you do with him. Although at the moment I lack anything else from Majin Bone to display him with, so I had to make do. 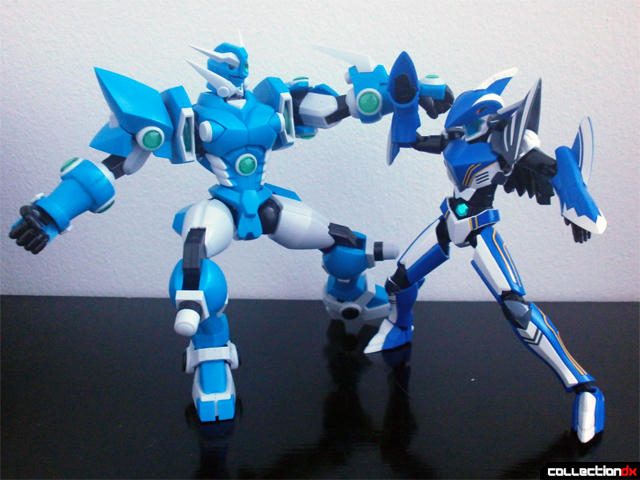 If you're looking for an easy (and affordable) way to get into model kit building, or have any interest in the source material, Shark Bone is definitely for you.

After the V Gundam models, the break-apart runners resurfaced with the Danball Senki LBX Models.

Just thought you should know.

This is an interesting, and nice looking model. Really great review!

The whole 'toolless' assembly and breakaway runners for this is the exact same technique as the Sprukits line Bandai is producing for the US. It wouldn't surprise me if this becomes the next wave. Probably for the 'Level 2' category due to its size and articulation.