SHF Kamen Rider Kabuto was generously provivded by Bluefin! You can grab yours today from Amazon and other fine retailers.

From cooking to spewing wisdom from his ethereal grandmother, Souji Tendou is a man whose goal is to be the best, to rule over all (much as his namesake states). Having become Kamen Rider Kabuto and achieving said goal, he now fights the dreaded Worm invasion, saving the planet and the people (though seemingly begrudgingly) that he loves so dearly.

With this, Bandai gives us Kamen Rider Kabuto from the Toei tokusatsu show entitled Kamen Rider Kabuto. The newest figure in the reboot of the SH Figuarts line, Kabuto brings the line to new heights and makes what can easily be seen as the best SHF to date.

Packaging:
The first thing you’ll notice about Kabuto is how different his packaging is. We’re used to the open faced box that all other figuarts come in, but Kabuto comes in a box that could easily house jewelry or other such expensive wares: 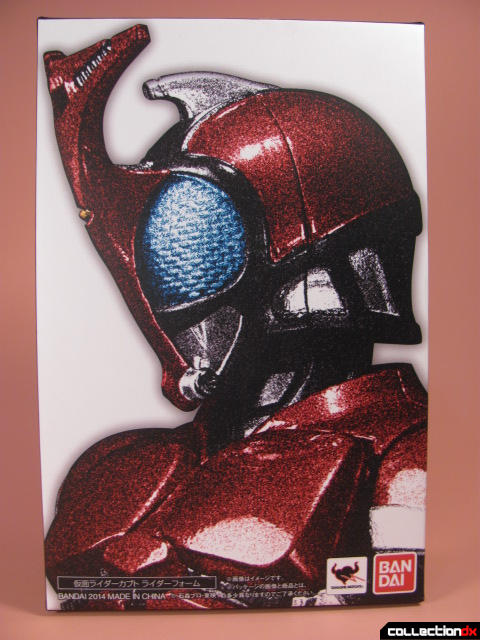 Made out of thick, sturdy cardboard, Kabuto’s box is stunning in its own rights. The back holds pretty pictures and words just like a regular box. 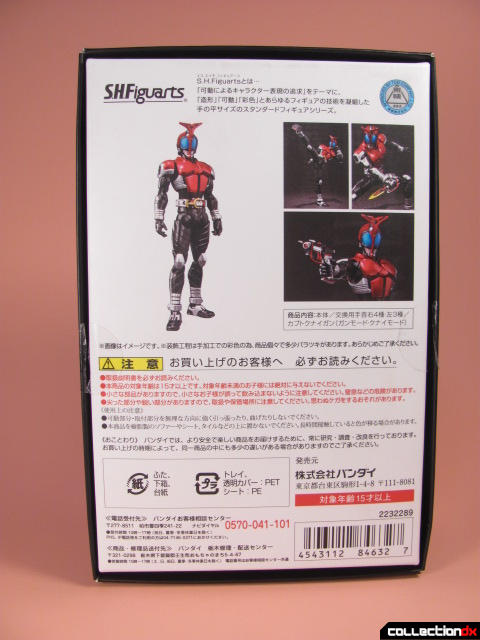 Kabuto is held snuggly within in a plastic tray with his accessories underneath in a similar plastic tray. 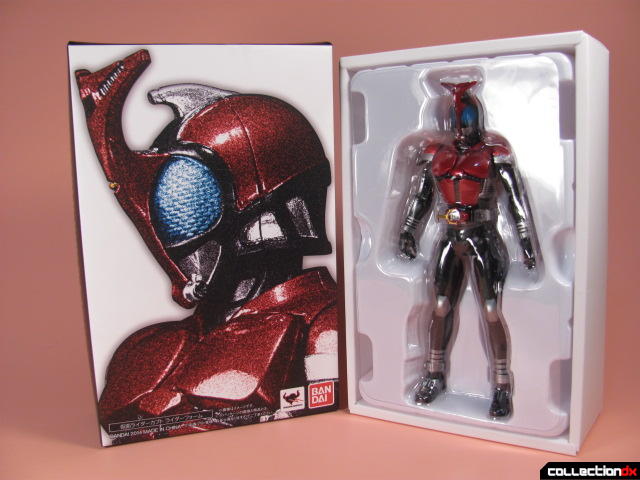 This box being so artful and fancy really goes well and matches the greatness of the figure inside; the total package works well and looks good together.

Aesthetics:
Kabuto’s colors are deep and shiny, matching pretty much perfectly to his on-screen counterpart. His red is a glossy, candy apple red with a very smooth finish that just eats up light. The silver and black of the rest of his outfit are matte and serve as a perfect offset to his red armor bits. His compound eyes give a great sense of depth and are an electric blue. 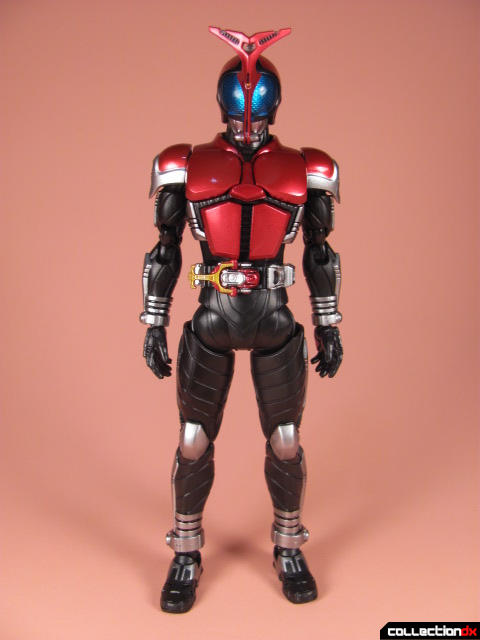 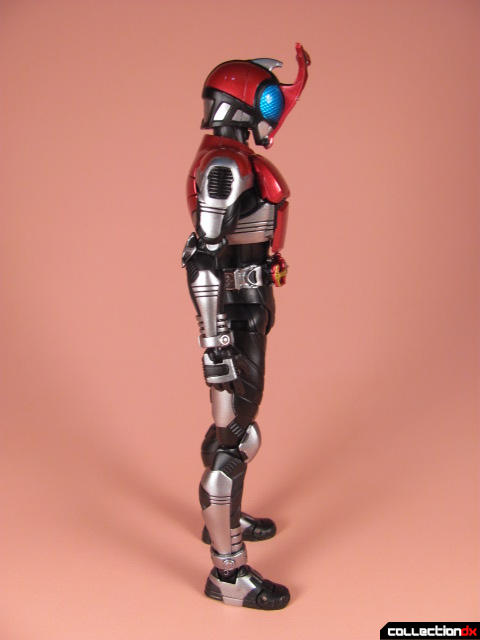 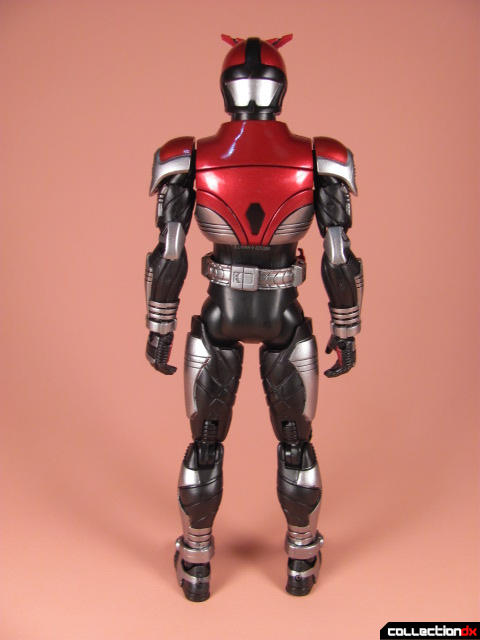 The paint is expertly applied with no discernable overspray or gloopiness. The silver plays well with the unpainted black and stays where it needs to be. The red paint of his chest is even and smooth. There are even minute paint details on his hands, belt, and crest that really pull everything together. The black paint in his grooves is tight and deep. 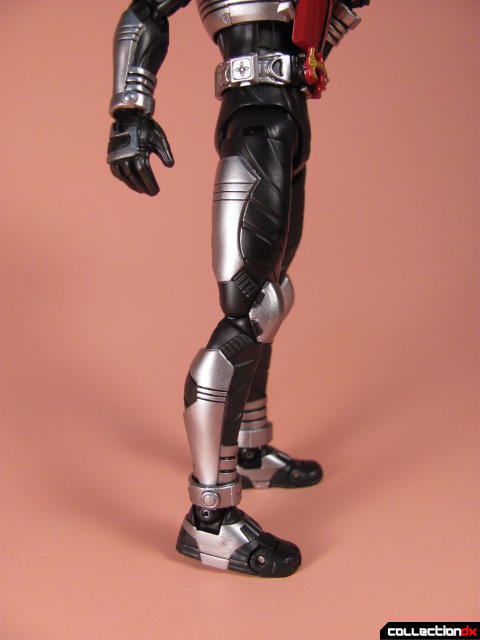 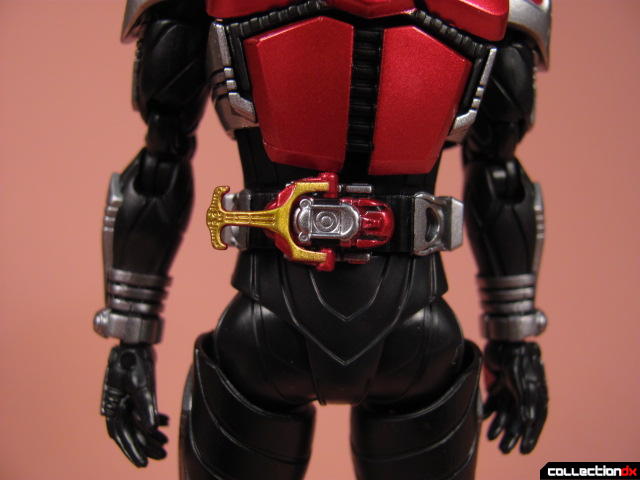 The sculpt of Kabuto is something to be celebrated (as Bandai did more than once) as it is near perfect. I used to say that Figuarts looked like little men in suits; this has never been truer than it is now. Kabuto sports sculpted skeletal regions and depressions and rises that encompass muscle groups. You can tell that this was sculpted from the suit actor up to the armor as it looks fantastic. This Kabuto makes all my other Figuarts look bad, frankly, this being such a huge step for the line as a whole: 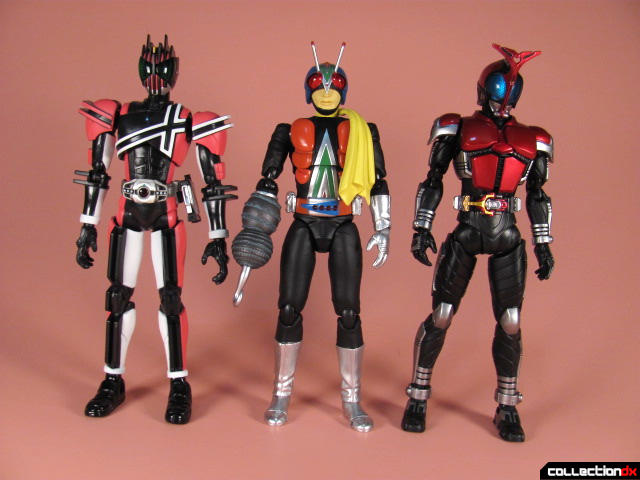 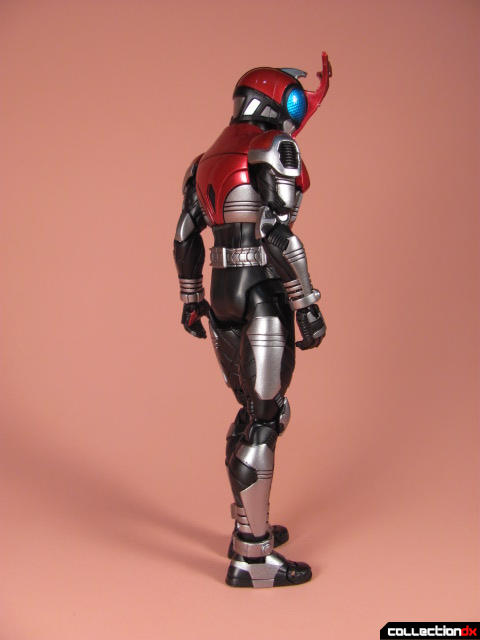 Articulation:
Like everything else so far, Kabuto’s articulation is excellent. 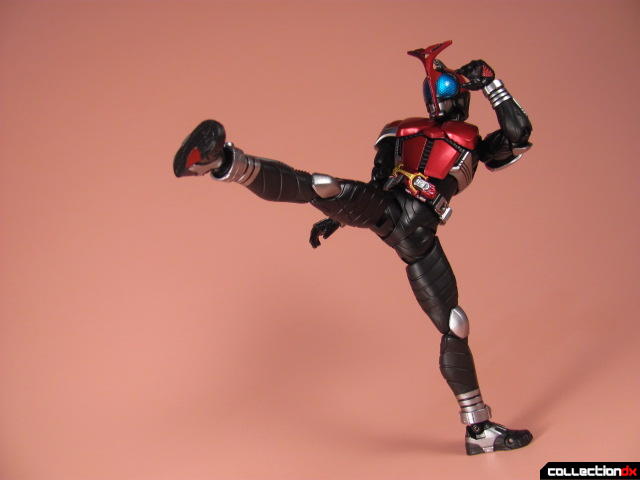 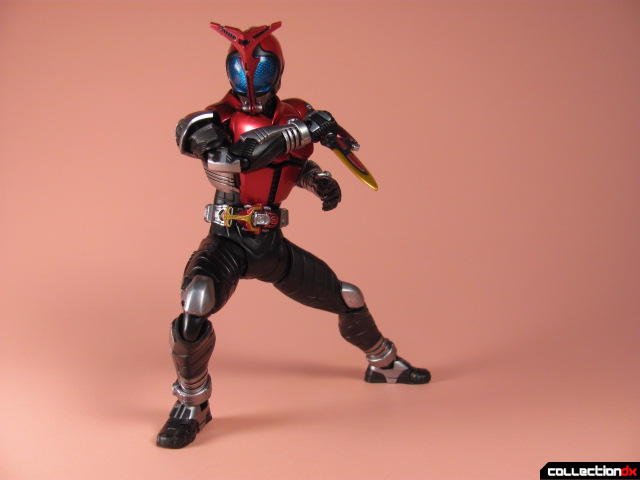 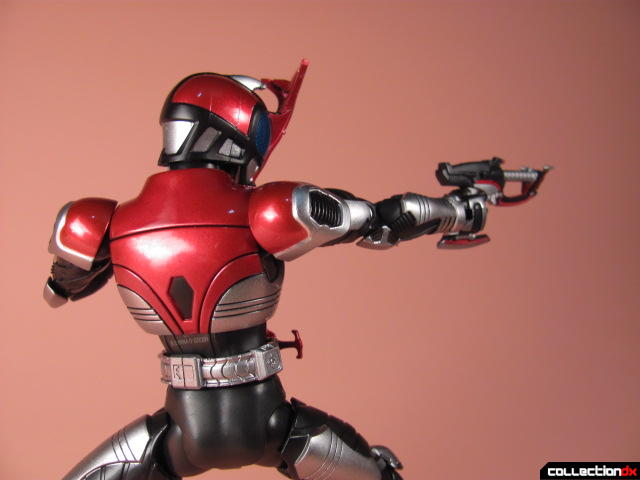 There’s not much this figure cannot do and also, on top of that, not look natural doing.
If there’s any one thing lacking in the articulation department, it’s the wrists. With this release, Bandai switched over to plug style hands instead of ball jointed hands. While this makes for easier hand switching, it strictly relegates the hands to and up and down motion with a 360° swivel. This is a disappointing change as it removes more natural hand gestures and movements. 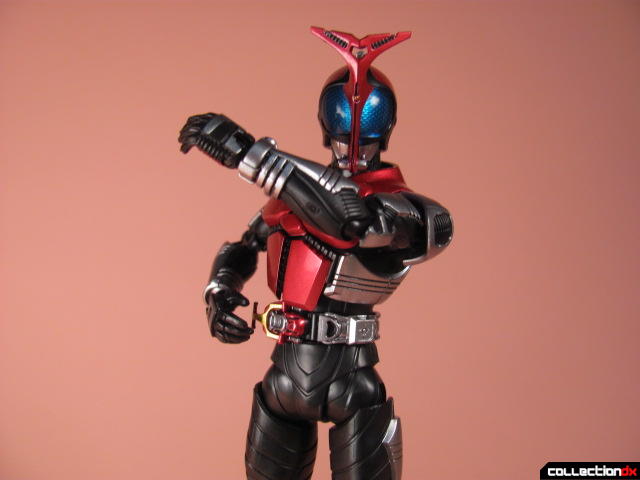 Kamen Rider Kabuto stands at 5 ½ inches tall (5 ¾ to the tippy top of his horns). 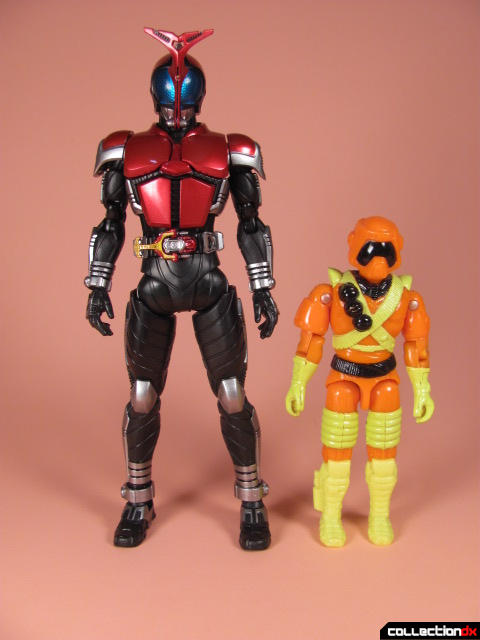 Accessories:
Kabuto comes with the following: 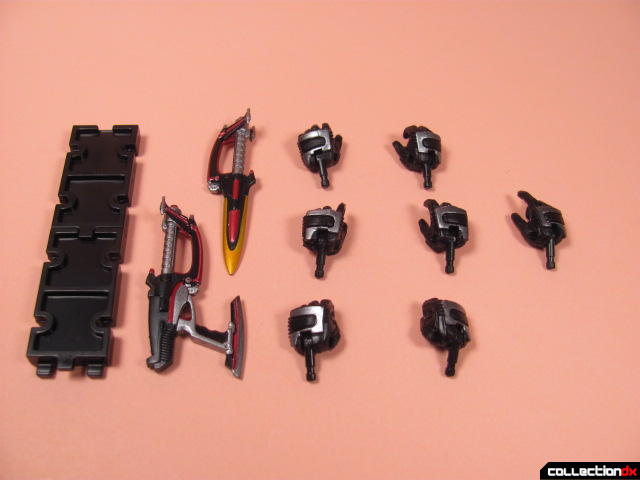 The hands are solid and are interchanged very easily thanks to the pole that they are attached to. The weapons are as excellently sculpted and painted as the main figure and share the same level of detail. 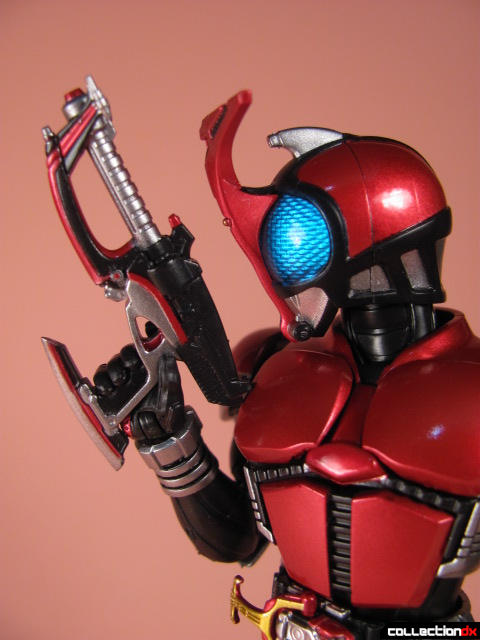 The hands are made from a harder plastic than previous SHFs and are sculpted in such a way that they readily accept and hold well Kabuto’s weapons; they slide right in and are yet held very taut. 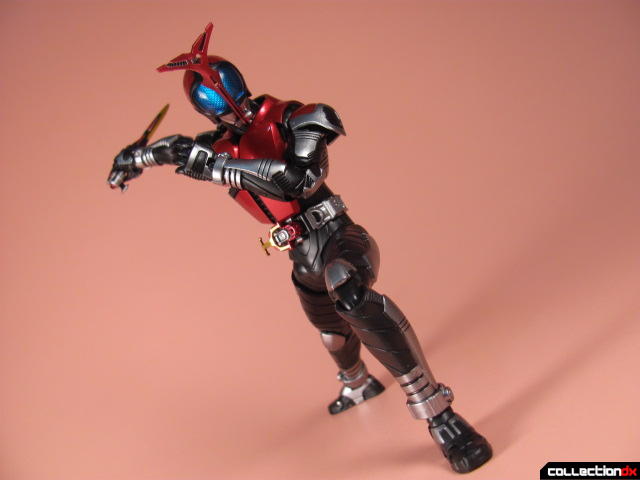 Aside from the character accessories, the box comes with a pamphlet detailing the construction and making of the figure and a commemorative card: 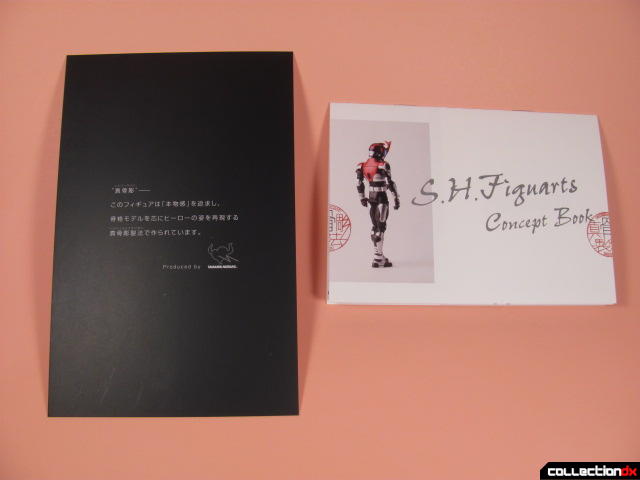 Gimmicks:
Besides being a killer collector’s piece and being awesome. . . none.

Closing Remarks:
In short, SH Figuarts Kabuto is superb.
The SH Figuarts line has come a long, long way since the early days of Agito, Masked Rider 1: The Next, and Domon Kasshu. With staggering articulation and sculpt and paint unlike any other figure, Kabuto shines; he is the peak of the line, showcasing everything that SHFs can do and more. If this Renewal Kabuto is a testament to what SHFs are gonna be from here on out, then count me in. If you enjoy Kamen Rider Kabuto or SHFs in general, then this figure is for you. 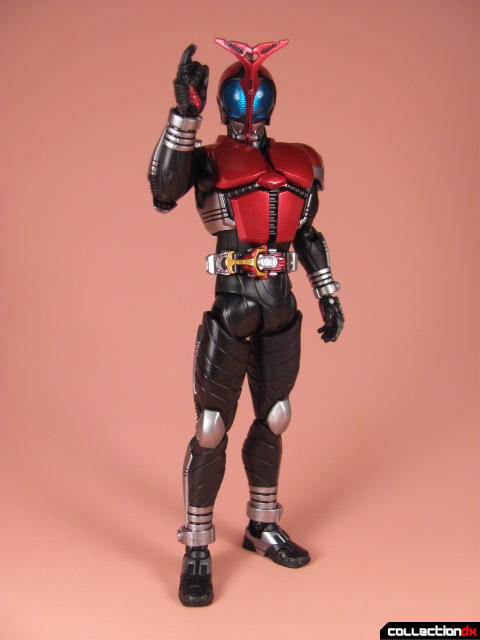 SHF Kamen Rider Kabuto was generously provivded by Bluefin! You can grab yours today from Amazon and other fine retailers.

A reboot/renewal was what the SHF line desperately needed.
So far, everything that has come out of it--Black, Black RX, Robo Rider, Bio Rider, Blade, etc--have been miraculous. I want to see even more so than before where this line can go.

The only thing I kinda hope doesn't happen is all SHFs getting renewals; I don't wanna rebuy any!

I really see some improvements, but are not enough to make me throw 40 box on an character I already have, again. Specially considering how extensive this line have gone, I prefer try to complet more super sentai teams or get another riders that I dont own... but is good for those that missed some of the first releases... Im eager for the arrival of my Kamen Rider Black RX

I actually have the exact opposite opinion but I am not really a completist. I think its such a huge improvement over the older SHFs that I've been selling off my older figures because they just don't hold up to the new body. The original just doesn't have the proportions to look this good.