Horizon In the Middle of Nowhere is a curious anime series in where Japan became the only habitable area after a huge catastrophe centuries ago. The country was divided among the surviving nation,s and they are attempting to reenact history in order to ensure mankind's future. In a world where science, technology, and magic work side by side, the act of repeating history has become a bit strange as people take on the legacy of famous figures regardless of race, gender, or species. You have to be a cut above the rest to stay alive in this crazy world, which brings us to the subject of this review. 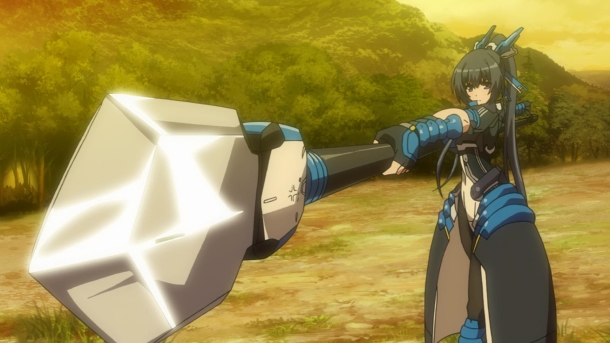 Honda Futayo is one of dozens of characters who is a part of the Musashi Ariadust Academy and aides her classmates in their quest to save the world (and maybe a few lovely ladies along the way). She is the daughter of Honda Tadakatsu, a powerful warrior who trained his child to be a top class soldier. Futayo is far from being the main heroine of the series, but she is fairly popular among fans and her combat oriented role made her a good choice for getting the figma treatment. 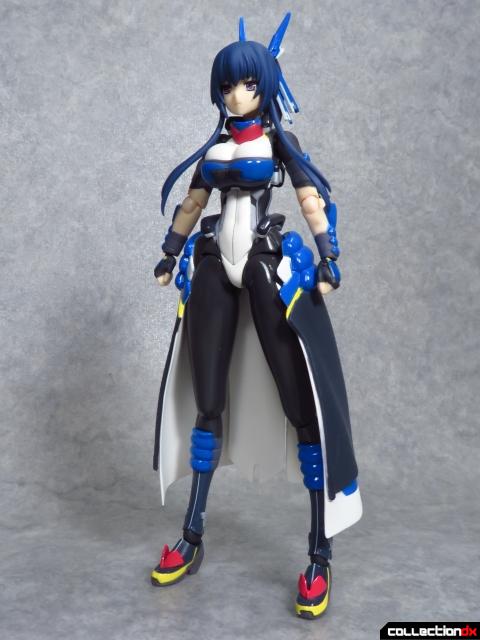 The figma Futayo looks like she just stepped right out of the show with bright colors and an excellent sculpt that faithfully captures her incredibly tacky outfit. Horizon is the kind of anime that wears its heart (and fetishes) on its sleeve but I found it quite enjoyable and Futayo is cool enough as a fightin' lady so she seemed like a good fit for my collection. She stands five and a half inches tall. 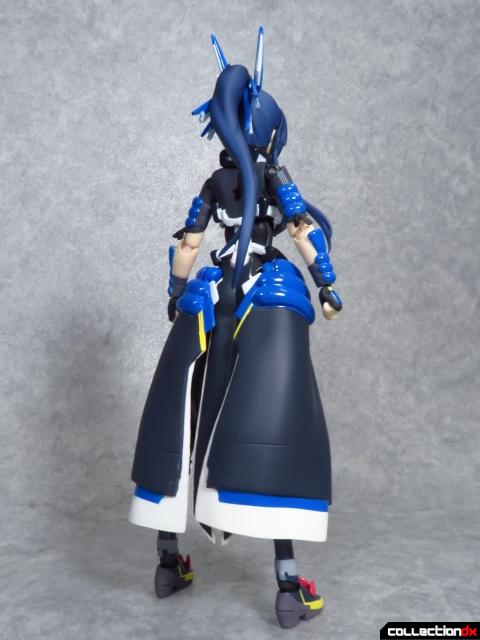 Her outfit features a pair of movable armored skirts as well as a single non-moving coattail on the back. All this makes Futayo rather back heavy and while she can stand unaided, her relatively small feet make this a touchy affair. 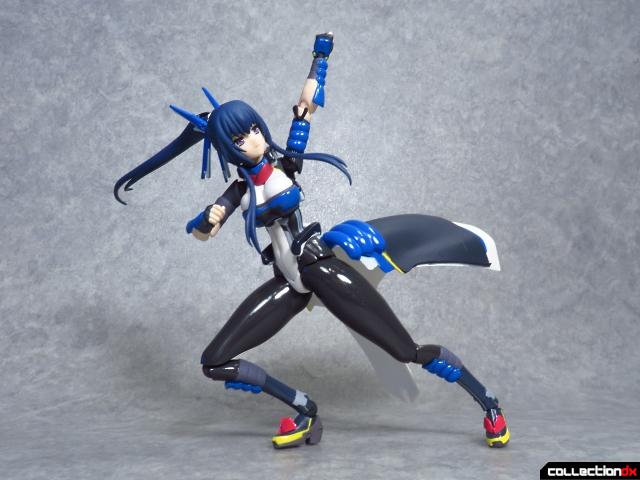 Futayo's articulation is typical figma fare with only the peculiarities of her design limiting range of motion. I do wish the coattail was movable in some way though as it restricts how close she can get to the ground in any given stance. Even just having a whole alternate coattail that's flared out would have been fine. The long strands on hair on the sides of Futayo's face are made from soft plastic so they can move over her arms and body without impeding articulation. 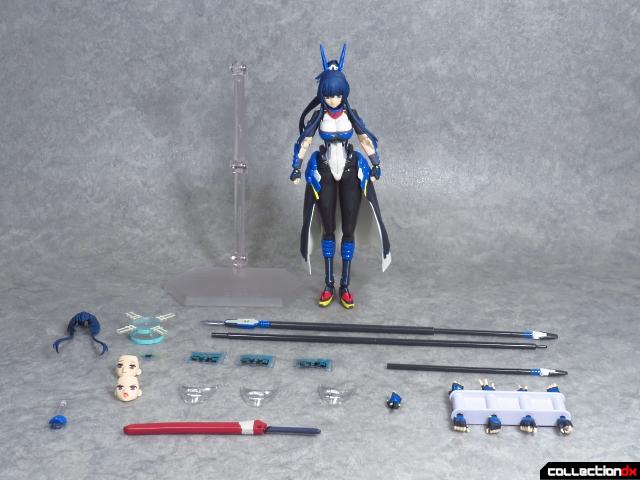 The leader of the Mikawa Guard comes with everything she used over the course of the anime. Futayo's accessories include: 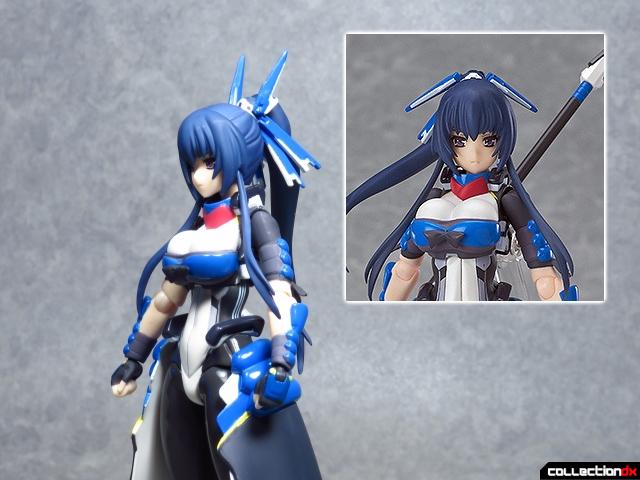 Also to complete Futayo's hair clip, you have to plug into two small "wings" into the base of her ponytail. During a fight these would flip up to look a bit more aggressive. I found that the wings are tough to attach and feel like they shouldn't be yanked back out or the tiny pegs they're on might snap off. For completeness I spliced in an official photo of what her hair clip looks like with the wings flipped down. Be aware that even the parts of the clip permanently attached to her head are made of hard ABS plastic and should be treated with care to prevent breakages. 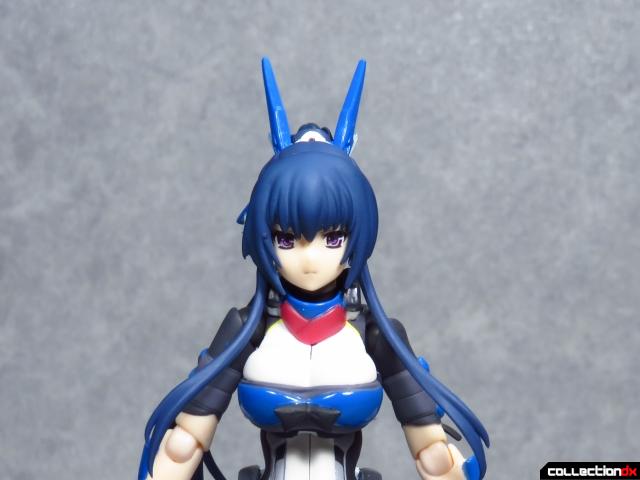 Futayo's faces are swapped out in the usual manner of removing the front part of her hair and then switching to the expression you want. By default she has a determined look befitting a young soldier. 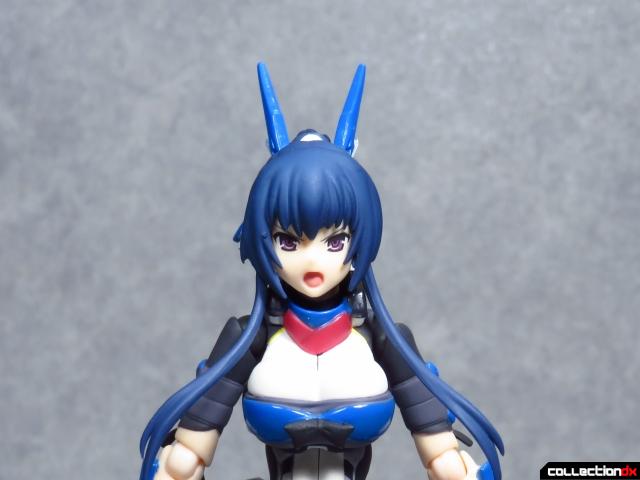 The second face has Futayo shouting a battle cry. 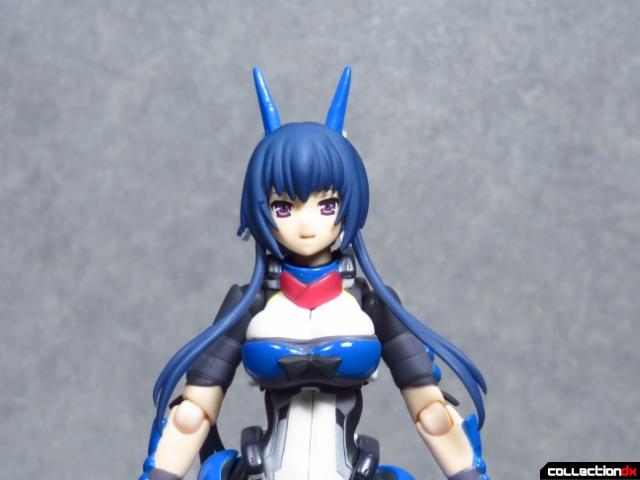 And her third face has her smiling, with a slight blush for when she gets confused by anything that doesn't involve hitting people with sharp objects. 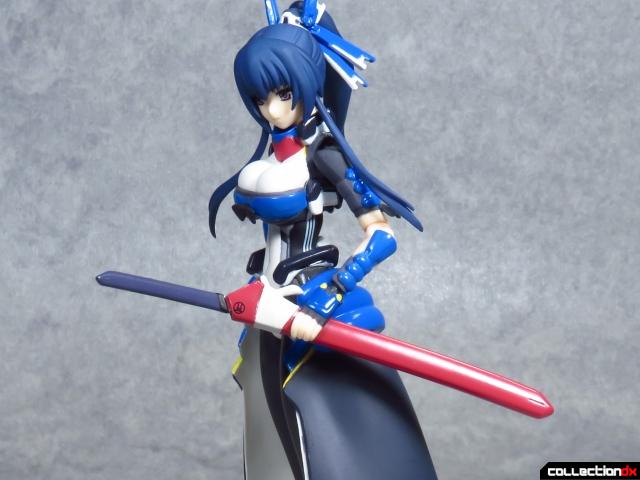 Speaking of sharp things, Futayo comes with the sword she used briefly in the show. It comes out of the box already stored in its shiny red scabbard. She has a specific left hand made for holding the scabbard. 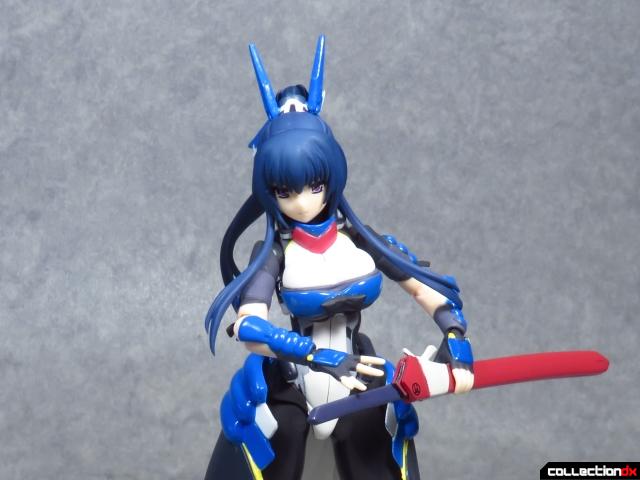 The figma can be easily posed as if Futayo was drawing her sword. 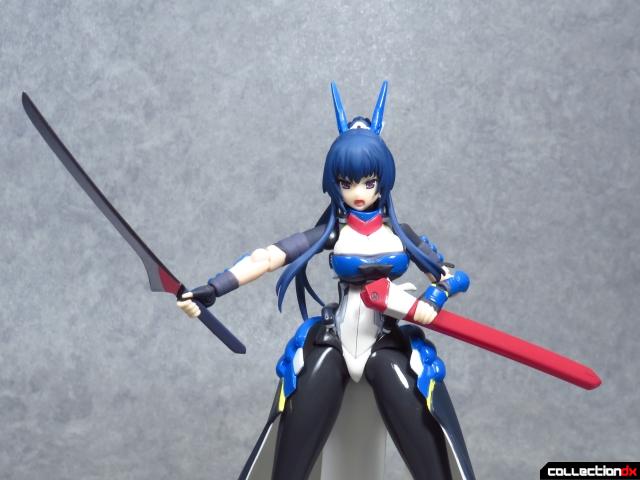 The weapon itself is a simple one piece affair with some nice paint apps to complete the sci-fi katana motif. It slides in and out of the scabbard with no problems and fits in just right so there's little chance of paint scraping. 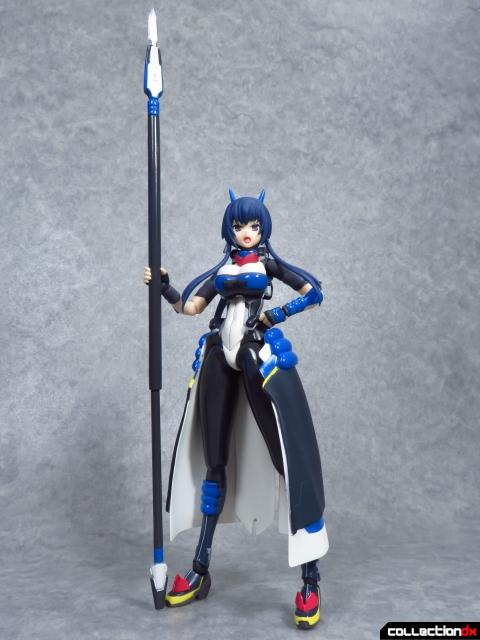 Futayo's main armament is the Divine Weapon, Tonbokiri (Dragonfly Cutter or Slicing Dragonfly). This big stick is longer than Futayo is tall even in its normal mode. The upper half is a bit thicker than the lower due to how the shaft breaks down so it can be extended with extra parts. 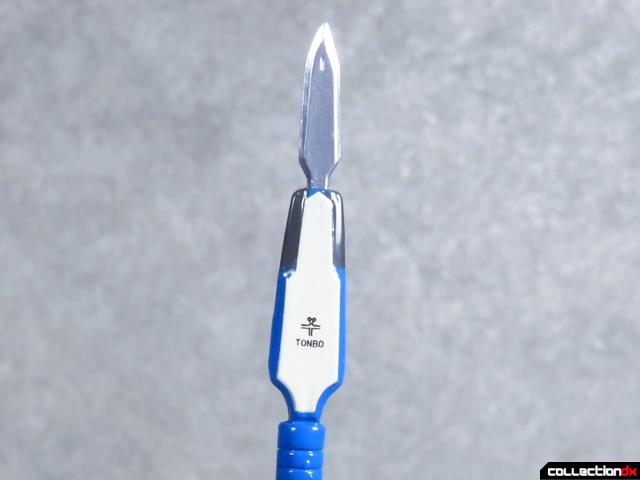 Tonbokiri is so named because a dragonfly attempted to land on the blade but ended up being sliced in half. There is even a small logo of the insect with "TONBO" written underneath tampographed on the tip. This little detail is absolutely tiny and I have to applaud Max Factory for making it look so crisp and clear even at this size. 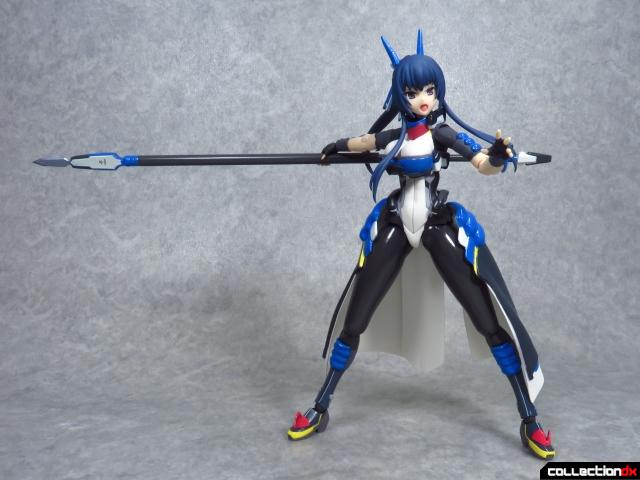 Futayo comes with two right hands for holding the spear. Each one has her wrist set at a different angle so you can experiment to see which works best for specific poses. The weight of Tonbokiri can be a bit much for the tiny hinges in her hands but most of the time they'll be oriented in a way that minimizes sagging. 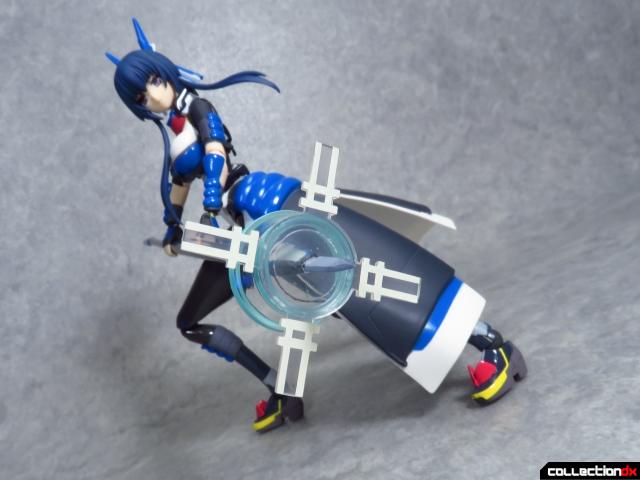 Tonbokiri is a legendary weapon that can "slice" through almost anything regardless if they are tangible or not. When in use, Fuyato reflects the image of the thing she wants to attack in the blade and shouts, "Bind! Tonbokiri!" which causes a magic circle to surround the tip. The figma replicates this through the use of an effect part. You first remove the blade of the spear in order to sandwich the bowl shaped piece between the top and the blue part. At first I was afraid the effect part would slip over the tiny end of the blade too tightly but it's actually a bit loose. The overall result is alright but lacks a certain amount of finesse in its execution. 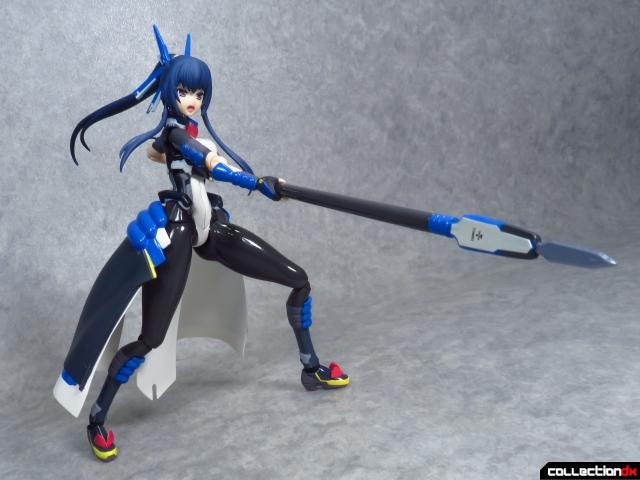 Fortunately, the figma can wield the spear so effectively it makes the effects parts seem unnecessary. 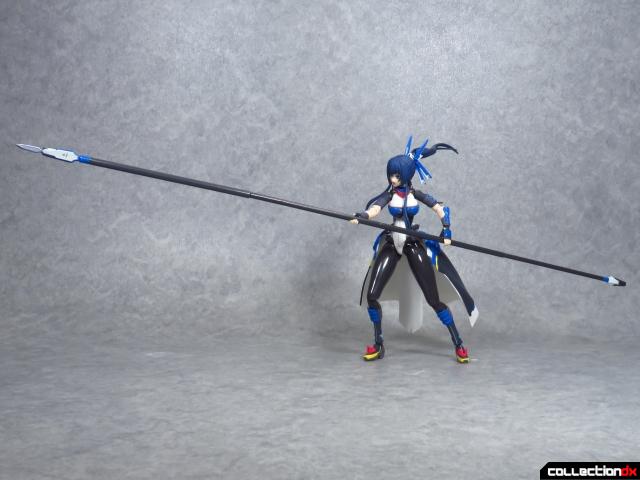 By adding an additional midsection and an alternate end piece, Futayo can make like the monkey king and extend Tonbokiri into an even longer spear. These parts are keyed to only go in one way so there is no chance of messing anything up. 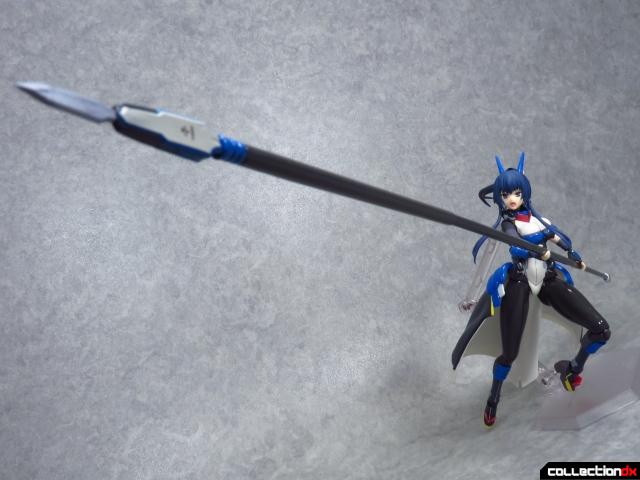 Futayo looks quite imposing with this setup as she can really reach out and stab someone. 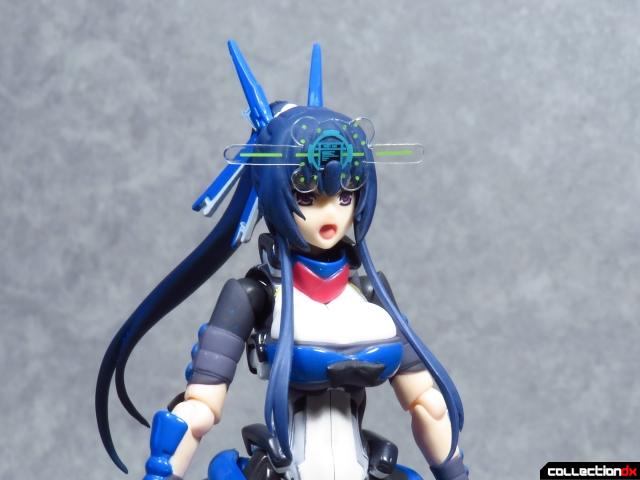 When she needs a burst of extra speed, Futayo activates her "soaring wings" ability. In doing this, it causes a tiny dragonfly symbol to appear on her head. To replicate this the figma comes with an alternate front hair part that has a slot for a tiny clear plastic piece to slide into. Unfortunately, on my figure this other hair part would not fit without me sanding down the pegs. I haven't encountered this issue on a figma before so I am not sure if this is a common problem with Futayo or if I was just unlucky. Also be aware that the little dragonfly is printed on a thin piece of plastic that could be easily lost or damaged. Admittedly I am not really into this gimmick so its lackluster execution is irksome but not a deal breaker for me. 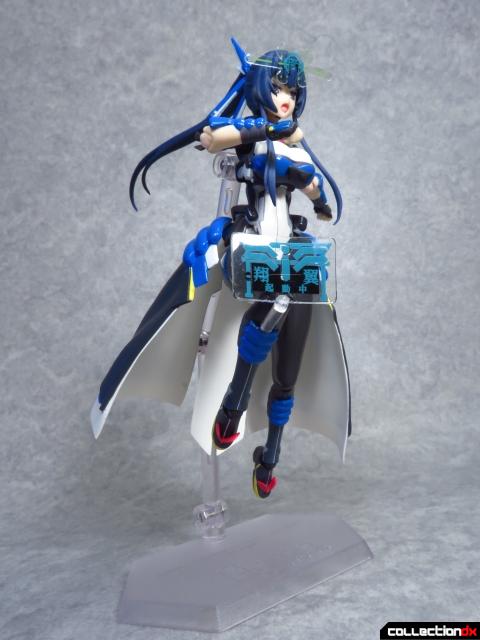 When she starts to dash, Futayo raises up one of her legs and a small floating sign appears in front of her knee. In this series, magic and technology are closely linked so many spell effects are emphasized with these computer style windows. To approximate the effect, the figma comes with an alternate right shin guard that has a small armature sticking out of it that one of the magic signs can be slotted into. 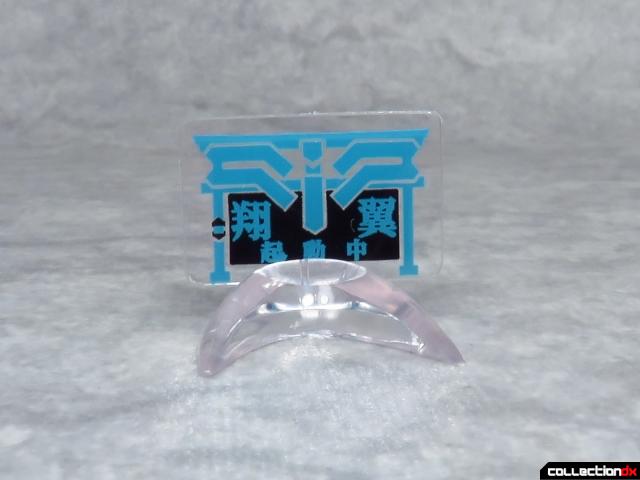 The figma comes with three of these signs and they are quite detailed despite being only slightly bigger than a micro SD card. They are all identical and have the kanji for the soaring wings (翔翼) printed on one side. You can slot these into the small crescent shaped dash effect parts. When Futayo uses her speed boost, several of these windows trail behind in her wake. While I give Max Factory props for trying to approximate this anime gimmick in real life, the signs suffer from the same problem as the clear plastic dragonfly symbol in that they are made out of thin plastic and can get warped or damaged just through normal usage. Also some signs fit loosely into the dash effect parts and fall out if you breathe on them too hard. 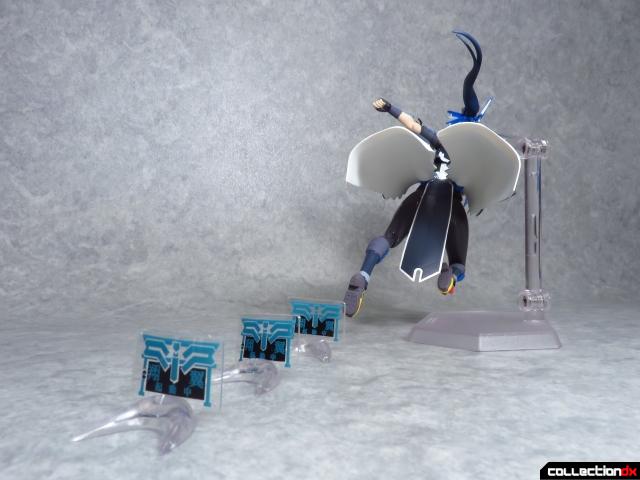 I have to admit though, Futayo definitely looks cool in mid dash when you get everything set up correctly. 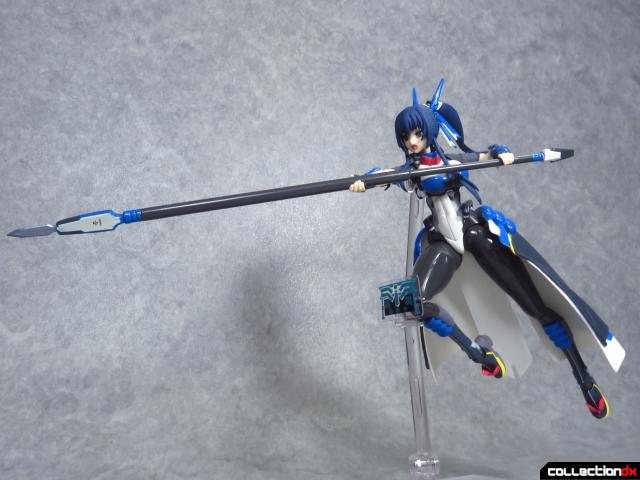 As a skilled fighter, Futayo uses her speed boosts to their fullest in battle. 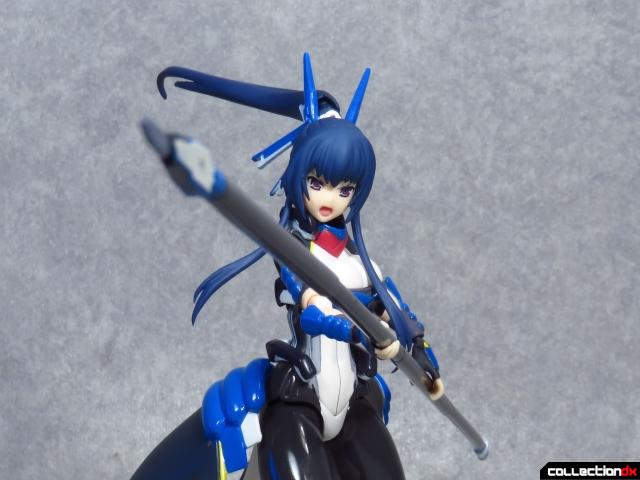 There is something about Futayo's demeanor and attitude that reminds me of someone else... 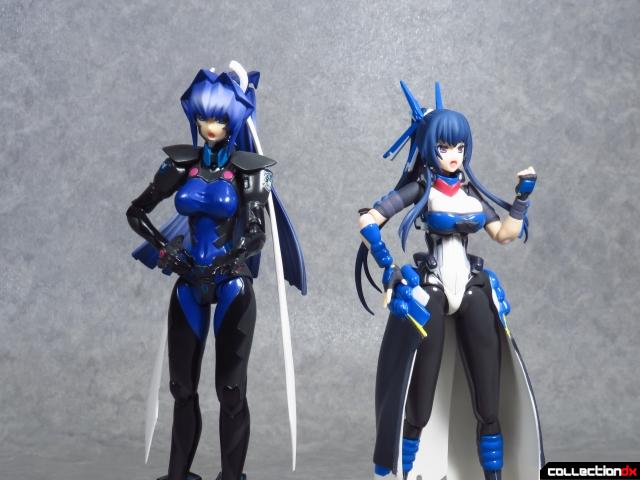 "Hmmph! The rest of my squad are slacking off too much! This isn't how you prepare for a war."

"Judge! Discipline and training are very important for becoming a good soldier." 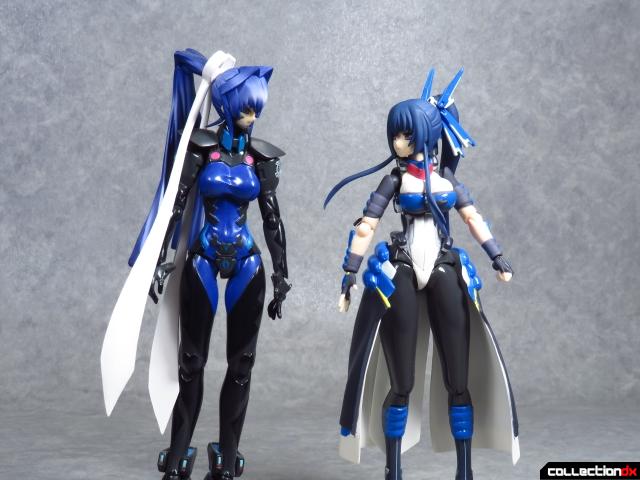 "Honda Futayo. It is a pleasure to meet you." 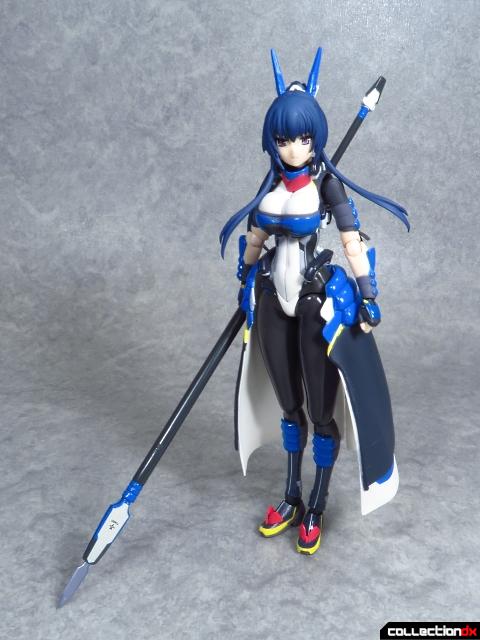 The figma Honda Futayo is a very ambitious toy that I feel overextended itself in terms of what kind of gimmicks can be done at this scale. However, the main figure is still quite solid for what it is and works reasonably well with the character's more exotic weaponry. It's just that all the tiny clear plastic effect parts are too small and delicate when sized to go with a 1/12 scale toy. Similarly, the emoting hair clip gimmick is also a worrisome affair due to the tininess of everything involved. Overall, if you just want a nicely playable action figure of Futayo then this figma can dutifully serve that need even if Max Factory's attempts at bringing anime Shinto magic to life fell a bit flat.

3 comments posted
What is she smuggling?

Thank you for another good read, Veef. It's always fun to see what poses you come up with at the end of each review.

When I first spotted this figma on Mandarake, I thought "What's going on with her chestplate? That looks like an odd design." A quick trip to the GSC site gave me better images and, uh, an understanding of what was represented there. I have not seen the show but, as you say, its fetishes seem readily apparent.

Horizon in the Middle of Nowhere is kind of like Hooters. Shameless but I'll be darned if they don't make good chicken wings.

I haven't seen the anime but I know that there's another character whose bust dwarfs this character 2-3x over.