I have very... strong feelings about Gundam 00. Especially the second season. I actually think that the Gundam Exia is a very neat design. However, this version in particular irritates me due to awful children's chorus songs and still political rhetoric. So I'm just going to pretend it's the normal Gundam Exia and not the Repair II.

With all of that in mind, the Gundam Exia is quite a slender looking figure and accurate to the original design. It's missing a few of the paint applications that make the design pop, but most of the essentials are there. 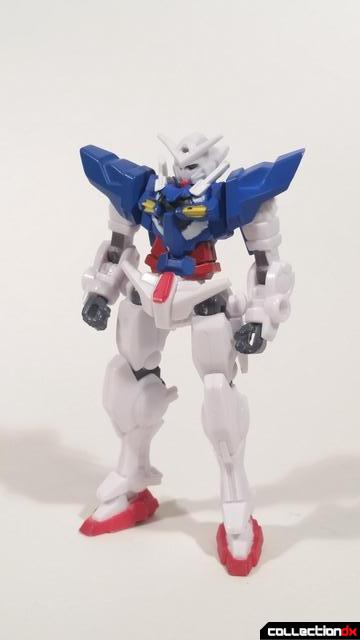 I really wish that they could have painted the GN Drive though. 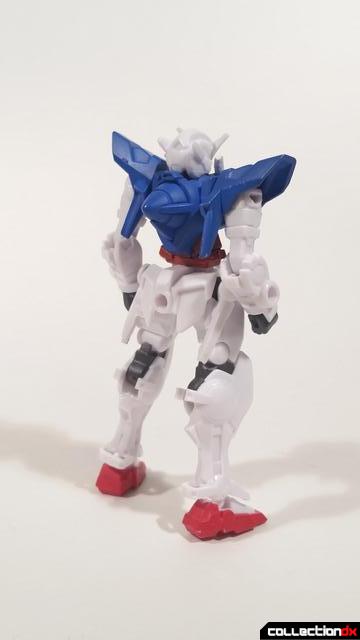 Some of the paint's a little messy, but that's okay. 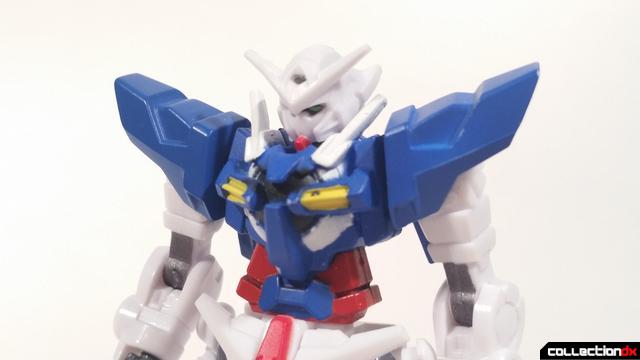 Because this is such a sleek design, there's not really anywhere to put a swing out ankle joint so I can understand its absence. Plus the figure moves well enough on its own that I don't notice that it's lacking it very much. 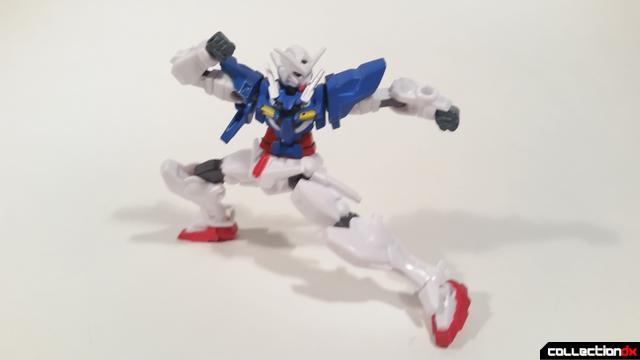 As a Gundam that's main feature is having a lot of swords, the Exia comes with several melee weapons. First is the GN Sword (Kai). There's no shiny green bits on it, but it still looks solid just in grey. 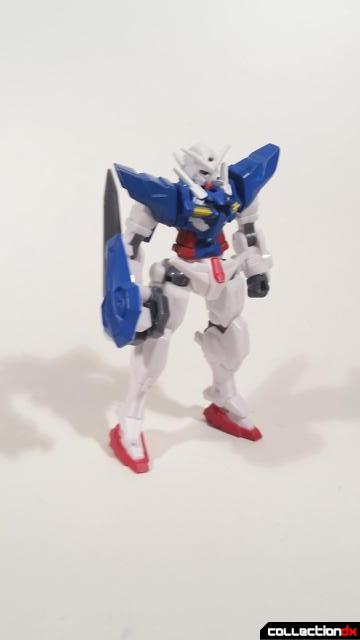 It also doubles as a beam rifle when stored in its normal mode. 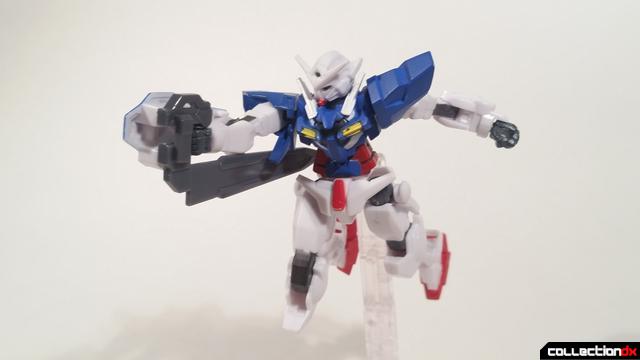 The blade swings right out under the arm easily and makes for a very impressive sword at such a small scale. 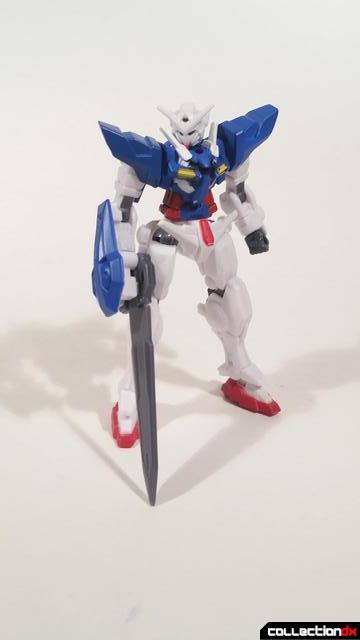 In addition to that, the Exia comes with two beam sabers of varying lengths. They are very distinct in their sculpt as being 00 beam sabers as opposed to the more traditional rounded beam sabers. 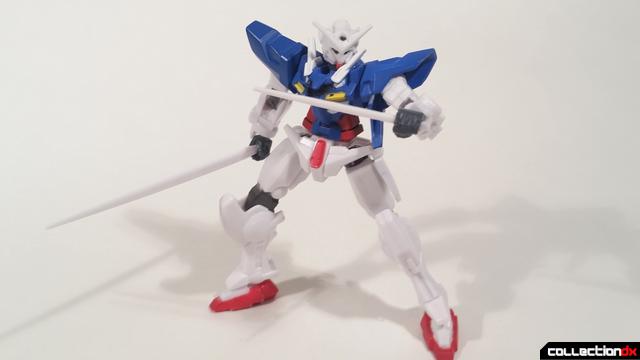 With these three weapons, the Exia is a very fun figure to swoosh around and have cutting everything that moves. 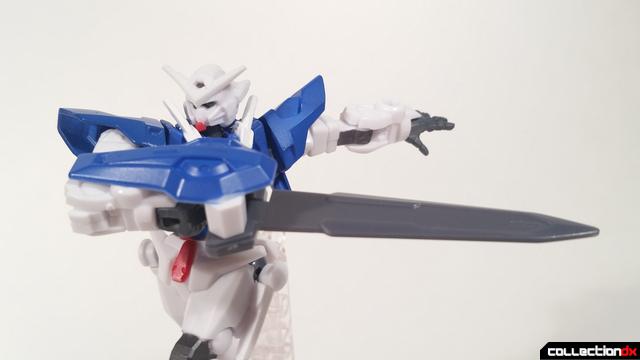 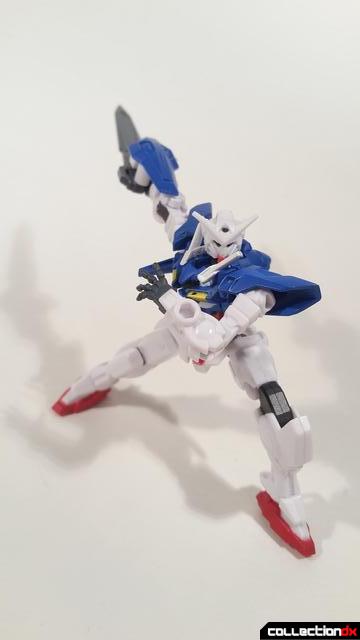 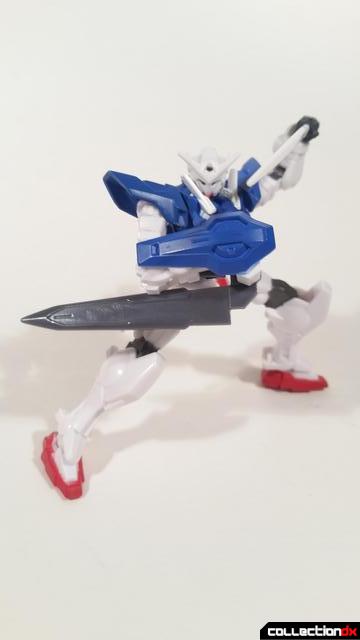 The Exia is a figure that I felt an average amount of excitement for. I was surprised by just how much I liked the GN Sword and how easily it functioned, that this figure wound up in my pocket while I went to school more often than I thought it would. As another titular mobile suit in the Assault Kingdom line, the Exia Gundam Repair II makes another fine entry. 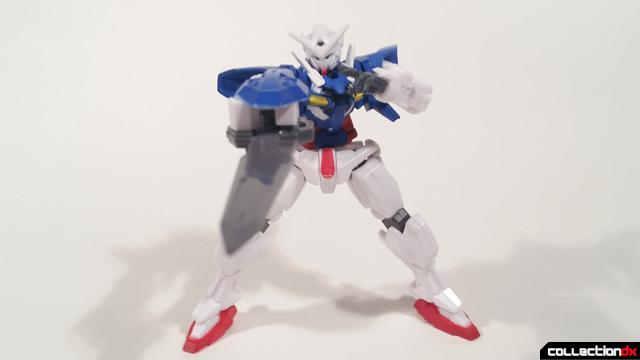 2 comments posted
Not Cutting it

The way they didn't paint this figure really doesn't cut it. It loses so much of what made the R-II unique for itself.

Though, I always felt the scene was fitting with the somber music compared to a loud roaring theme. I hated the compilation movie using the second season's opening theme during that moment.

I'll give the movie version credit for reciting the girl's letter in the aftermath, giving it a full circle take on the ending of the first season.

You know you're probably right about the paint. Since I personally try to remember as little about 00 season 2 as possible, I probably never bothered to learn about the distinct differences between the two.

I never saw the compilation versions of the show, I just remember being really annoyed at the fact that the letters Ismail was sending weren't even actually being sent to Setsuna. They literally held no meaning aside from random peace-toting obnoxious hogwash to relate back to an earlier scene.

As you can see, I have very strong feelings against 00.