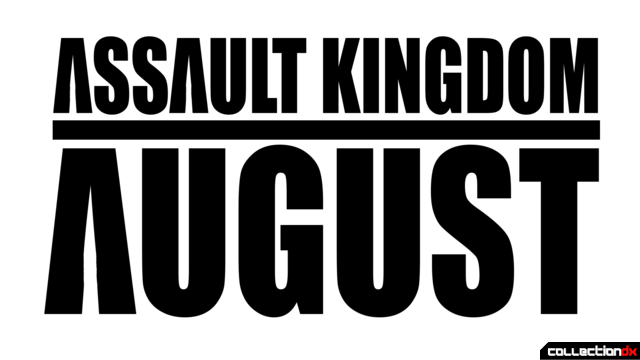 Assault Kingdom is a line of candy toys in Japan that I've been avidly collecting ever since I first learned about them a few years ago. I've been meaning to catch up on them and review them all, but have been awfully bad about keeping up with them as they release. So for the month of August I'm going to be reviewing an Assault Kingdom figure every day of the month until I'm caught up with current releases.

Since I covered the RX-78 the last time I reviewed an Assault Kingdom figure, let's just jump right onto the next numbered release in the series, the Unicorn Gundam. I've gone on record a few times regarding the Unicorn Gundam. It's a design I love a lot, but I absolutely hate the Master Grade which kept me off of Master Grade kits for a good 5 years or so. But when I saw a cheap candy toy at my local comic book shop, I couldn't help myself and picked one up. And boy am I glad I did. 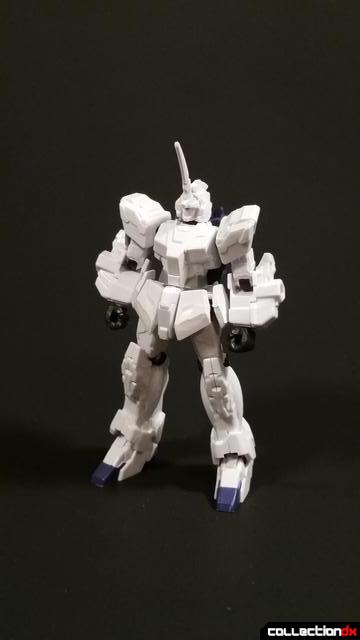 Even though the Unicorn is a simple white mobile suit, all of its sculpted lines and details really give the figure depth in the light despite its size. I often just like to admire the figure and how it looks in various lighting conditions. 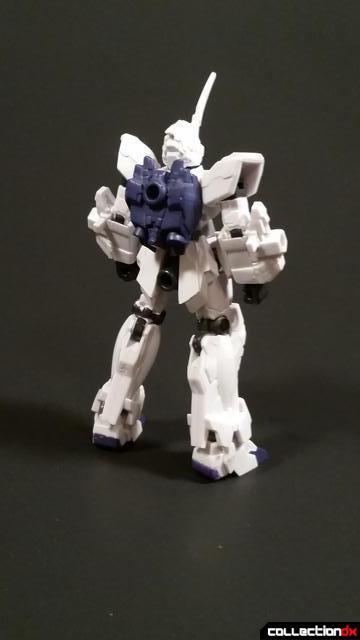 The paint is minimal, but I love that the visor has the smallest sliver of green to give it extra life. 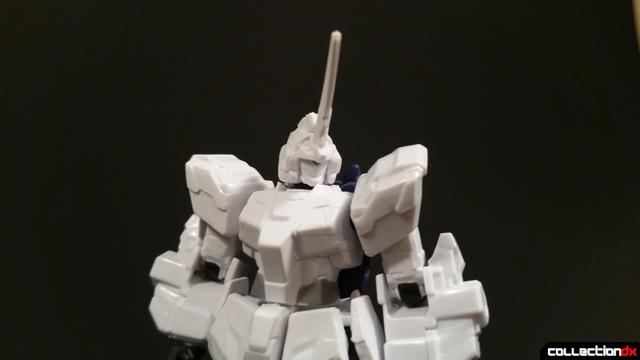 Just like the RX-78, the Unicorn Gundam's articulation makes it move like no one else's business. Smart swivel joints and ball joints work in tandem for a great range of motion. 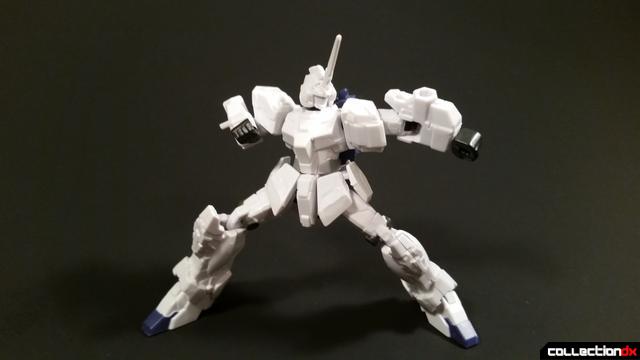 However, the Unicorn Gundam has an extra joint that really makes it stand out. It's ankle joint is actually on a hinge that allows the foot to swing in and out. This lets you get more dynamic stances and a wider range of motion. 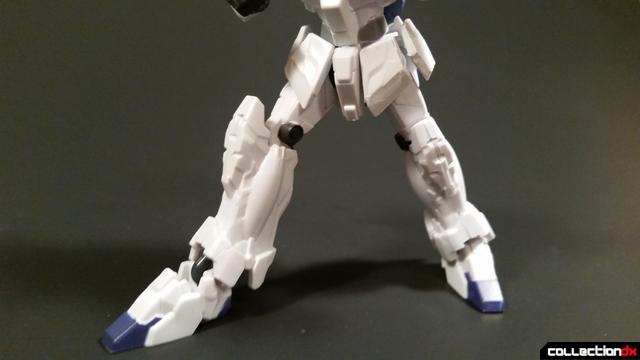 For accessories, the Unicorn Gundam comes with an alternate set of open hands, along with a beam magnum rifle, a shield, and a beam gatling gun. A pretty good loadout for a candy toy! 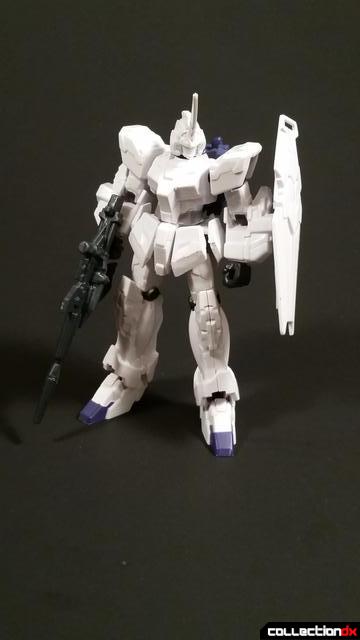 What I love is that the shield can be stored on the back, and the beam rifle can actually peg into the forearms as well. 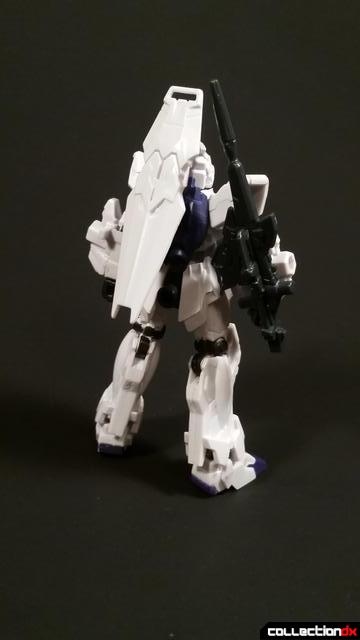 The beam gatling gun just pegs right into any of the peg holes on the Unicorn, and you can fit it onto the shied as well. It looks fierce once on him. 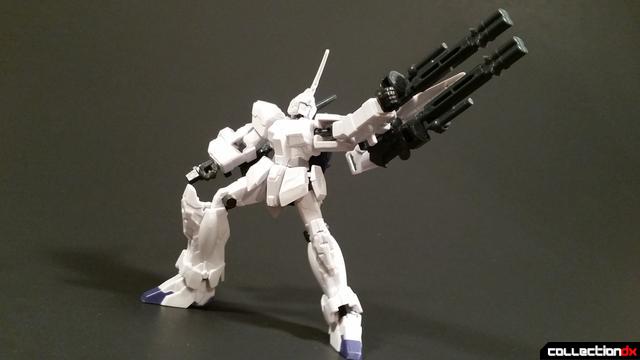 And if you're like me, you'll get a second Unicorn just so you can do this! 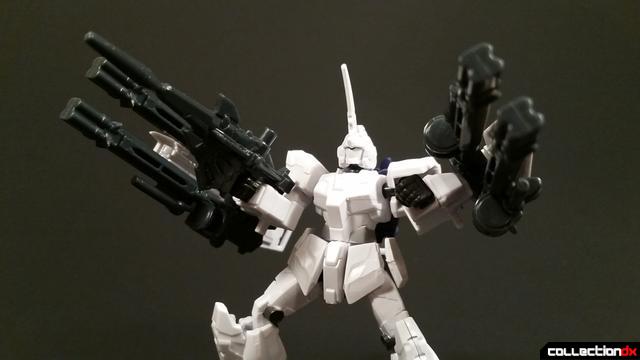 Now if you get all four figures in wave one, you can put the stand pieces together to make an MS cage. Although you can put any figure in there, it's really intended for the Unicorn Gundam. It's a very neat little display and you can even store the weapons on the side! 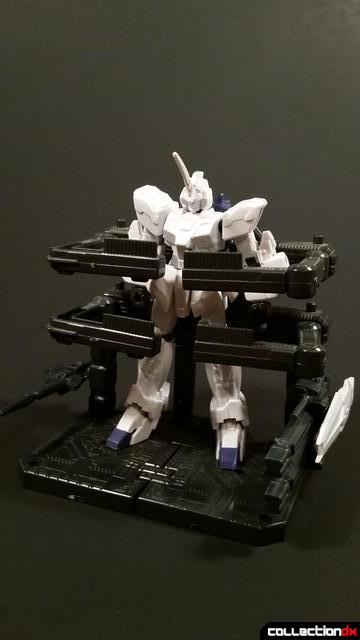 Up close it really looks like a bigger toy than it actually is. 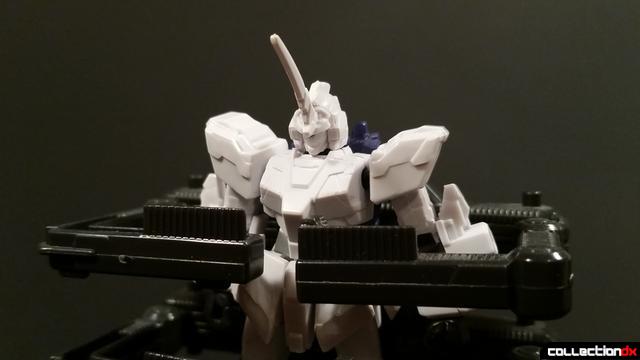 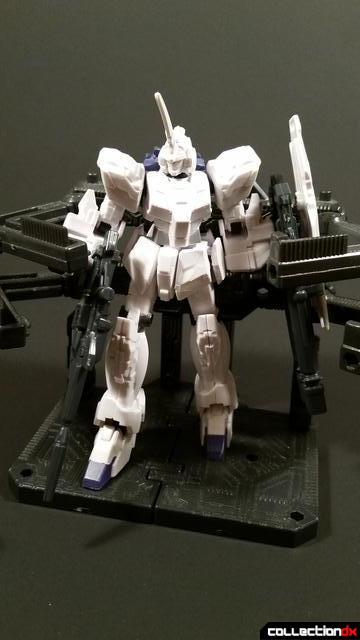 The Unicorn Gundam along with the Aile Strike Gundam were the first two Assault Kingdom figures I ever bought, and I have a real soft spot for the Unicorn in particular because of just how much fun it was for its size. Even now, it's one of my favorites in the whole line because of its extra weapon storage and simplicity. Nowadays, there's quite a number of Unicorn Gundam figures in the Assault Kingdom line, but this one is still my favorite. 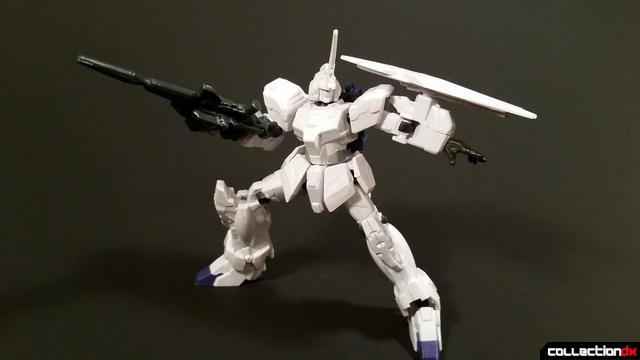 Love Assault Kingdom! I still haven't been able to catch the first wave.

Anyway, great idea! Lookin' forward to the rest of the reviews!