One of the most awe-inspiring moments of my childhood was watching Thunderbirds for the first time on Television in the 1980s. I remember the day fondly. It was one of those lazy Sundays and the local television station KCOP showed Thunderbirds as filler that afternoon. It was an episode where the Empire State Building was being moved and the subways became flooded. They had to call out International Rescue to rescue the trapped people in the flooded subways. It was an amazing day of High Puppet Drama and sleek futuristic ships, I simply had never seen anything like Thunderbirds and I was hooked for a lifetime. Since Thunderbird 2 and Thunderbird 4 performed most of the action in that episode these two ships became my favorites of the International Rescue fleet. 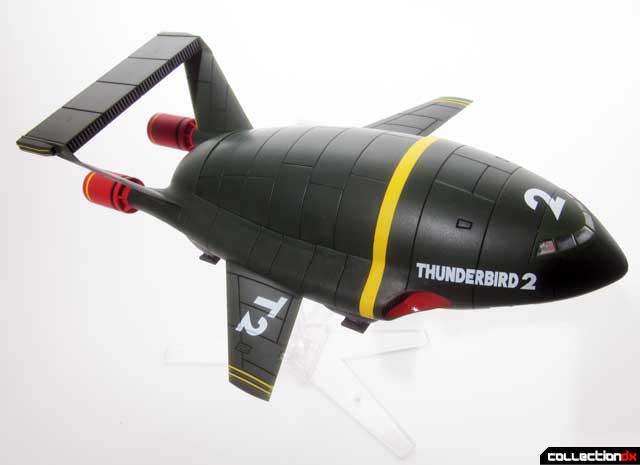 Unfortunately when it came to toys and model kits representing these two ships in the 1980’s I was stuck with woefully outdated model kits and highly collectable toys that were priced out of a kids budget. Owning a decent Thunderbirds toy at a reasonable price was a scratch that had not been itched since I was a kid. Yes there had been a few die-cast collectable Thunderbirds toys over the years but they were always in the $100+ range and I missed the window of opportunity when they were released. 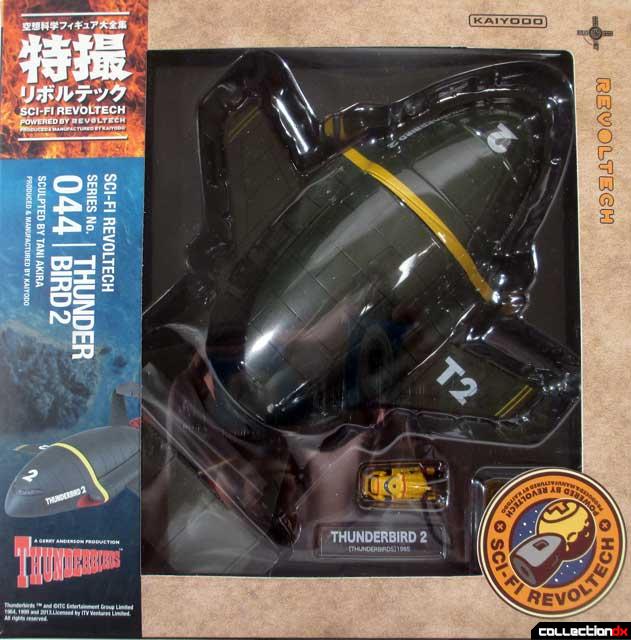 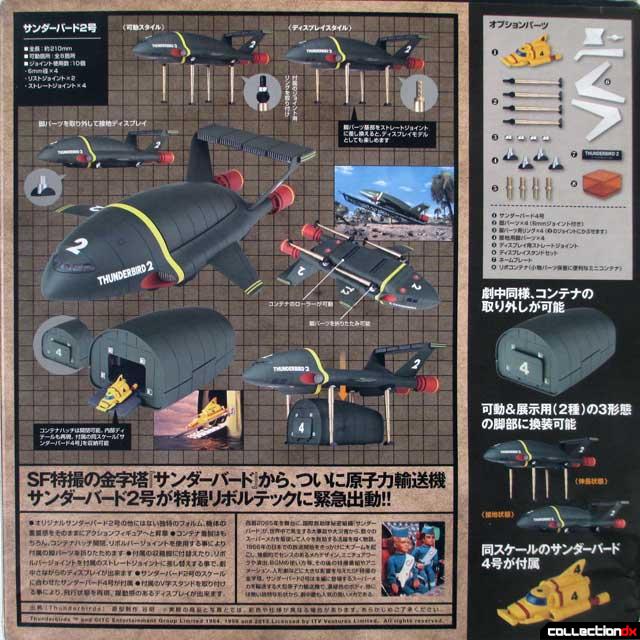 So out of the blue I was surprised when Revoltech released their Thunderbird 2 toy in their excellent Sc-fi Revoltech line with focuses Showa era licenses and non-native film and television properties. 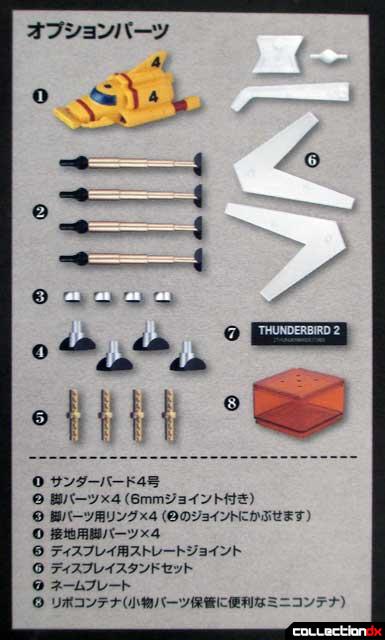 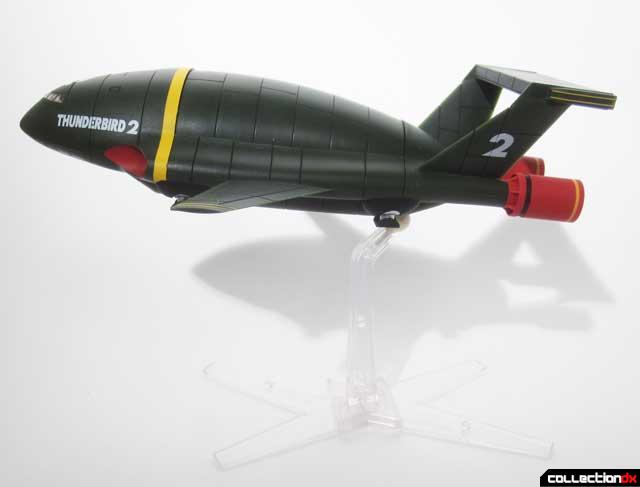 Unlike previous Sci-Fi Revoltech releases, the box cover does not have a gatefold cover, which although not completely negative it does take away the professional look of the Sci-Fi series. 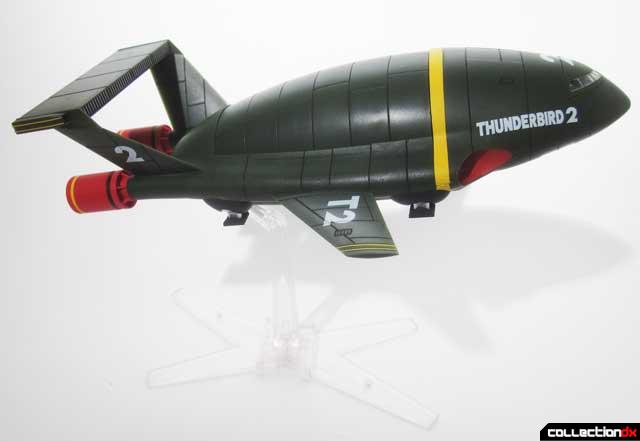 First off I was impressed by the reasonably large sized measuring 9 inches long, filling up the box quite nicely. The plastic is a nice high quality plastic with recessed panel lines with black weathering lines in the panels. The overall appearance is clean with printing sharp and an aligned correctly. 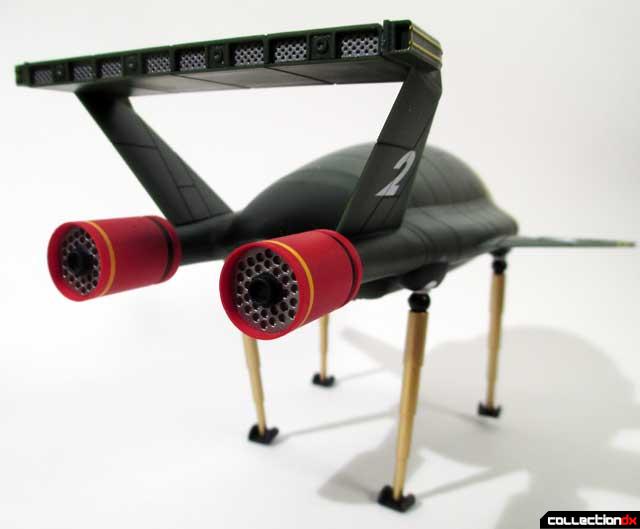 I especially like the red boosters exhausts in the rear of the jet and intakes. Kaiyodo could have picked any red off the shelf but chose a nice deep red that compliments the entire toy. 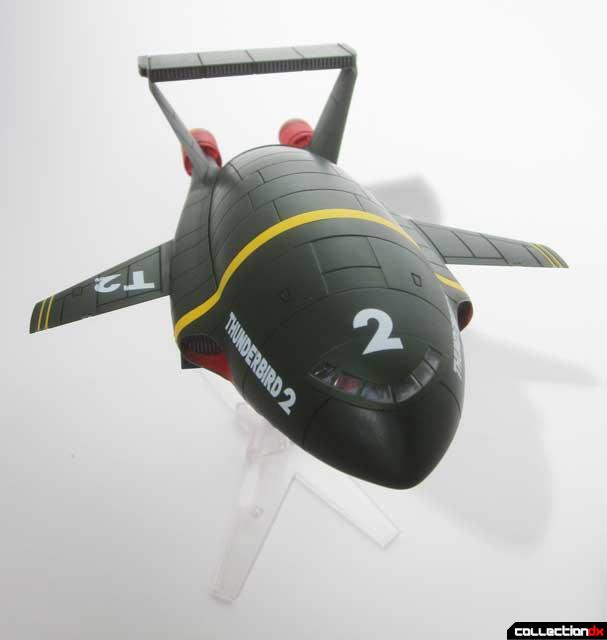 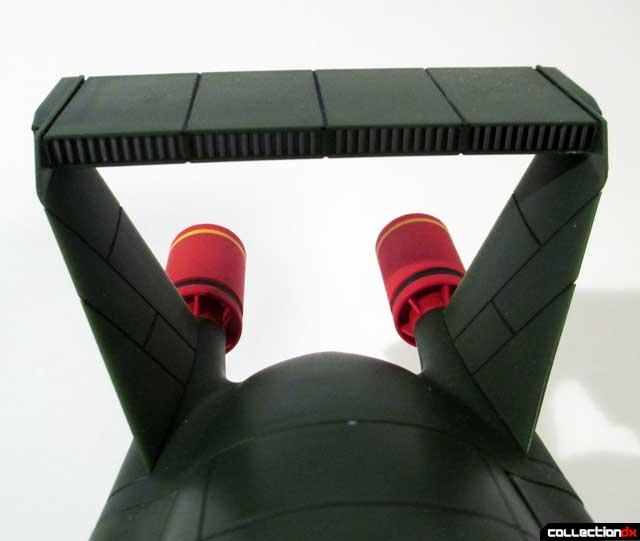 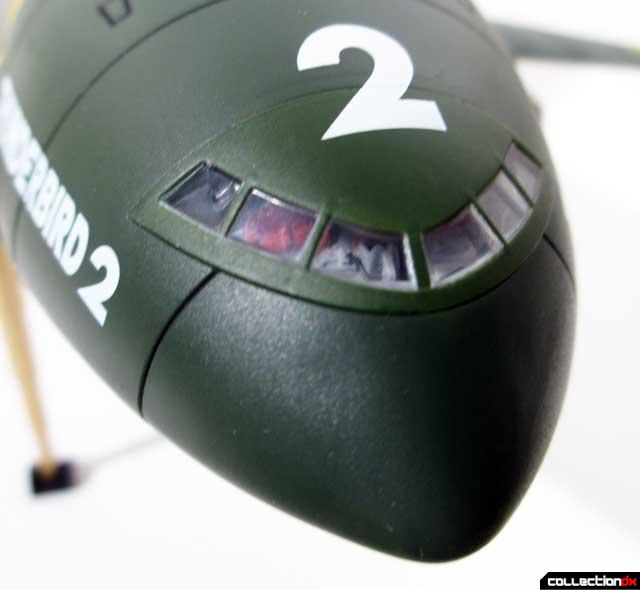 Although Thunderbird 2 is a smooth aircraft I love the sharpness of the mold in some areas such as the long rudder wing and lifting exhaust on the bottom of the aircraft. I also love the clear windows, something very 1980’s old school about the window itself and the nice details in the cockpit that are seen such as the painted seat and control panels. This could have easily been a window to a hole in the body but the cockpit details are included. 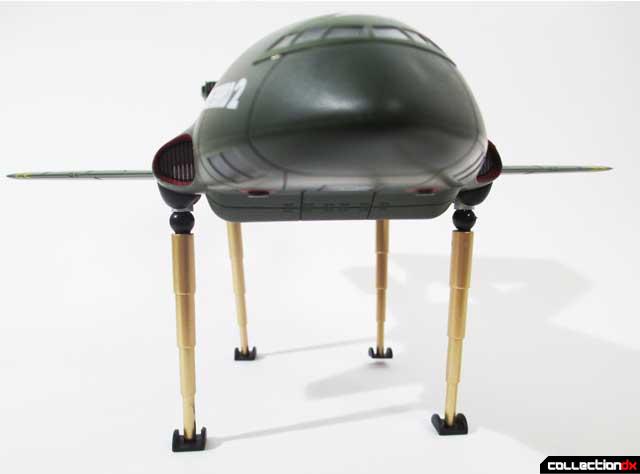 Thunderbird 2 is known for its many cargo capsule with its specialized gear inside, and famously used in the series before it is launched. One capsule is included along with one of the most famous vehicles of the series, Thunderbird 4, the highly mobile yellow rescue submarine. No bigger than a quarter, the details are great for its size and a most perfect companion to this set. 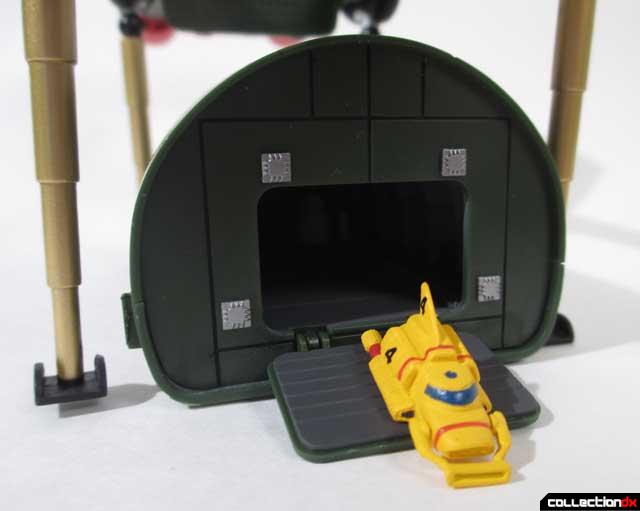 Capsule 4 just squeezes out of the body with a quick push of the thumbs. The capsule fits firmly in the body and in fact I did not even know it came off as it looks perfectly integrated into the body of the aircraft. The capsule features rolling wheels and a moveable entrance door to place Thunderbird 4 in. The interior of Capsule 4 could just as easily been and empty hole there is a full interior including paneled floor and various equipment throughout. Even ribbed walls are included in part of the mold. All I wish was if there was a light to see all the great detail inside. 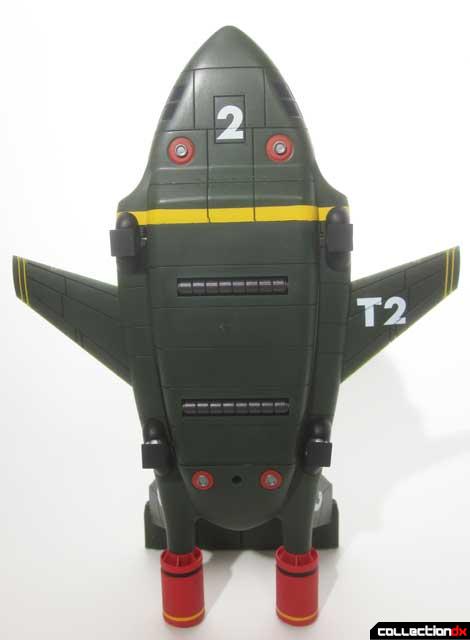 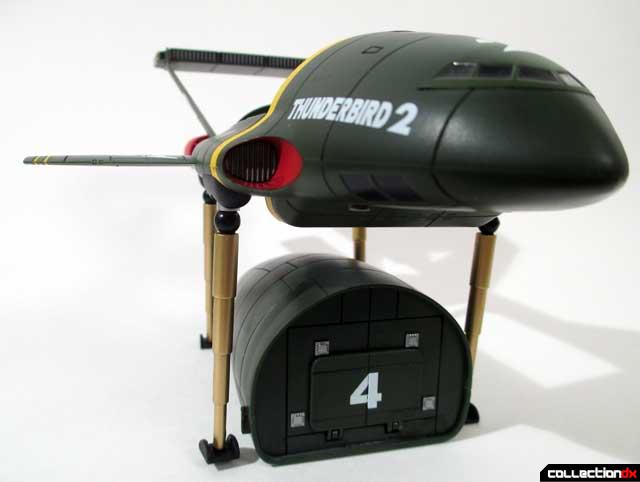 The capsule release system in the series includes long telescopic legs that raise the Thunderbird 4 off the ground, leaving the capsule on the ground or ocean. This is represented in the toy as two types of parts. The telescopic legs are already attached to the Thunderbird 2 toy out of the box. The legs fold under the body using Revoltech joints but adaptors are included if you do not want the legs to bend. Since the legs do not telescope four extra landing feet are included to snap underneath to appear that they are telescoped in. Everything switches around nicely and I enjoy the gold paint of the telescopic legs. 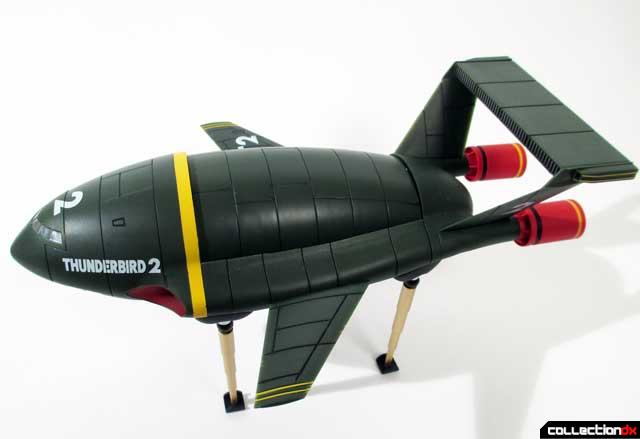 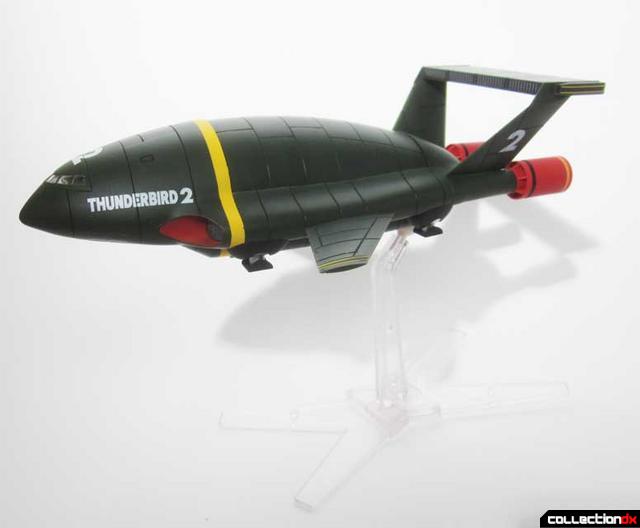 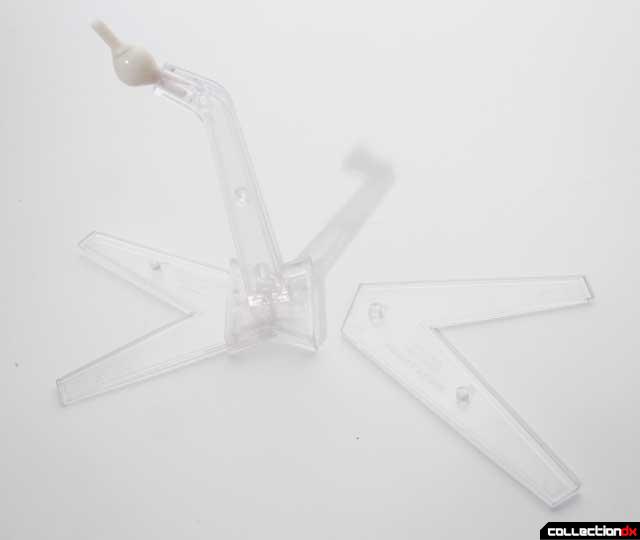 The only disappointment with the entire release is the stand. The stand is made up of four parts with the base made up of two parts. The stand attaches not to the center of Thunderbird 2 but in the near rear end of the vehicle. When attaching the vehicle to the stand the already front heavy Thunderbird 2 has a tendency to fall forward. This is compounded by the fact that the stand base made up of two parts. The front weight of the Thunderbird 2 tends the break the two-part base off with the toy falling over as a consequence. This can easily be fixed by gluing the stand together, but nothing can be done about the stand hole being so far back in the body of the aircraft. 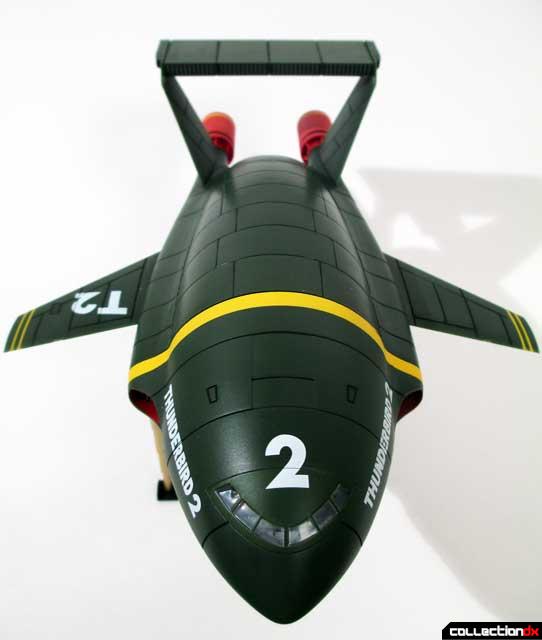 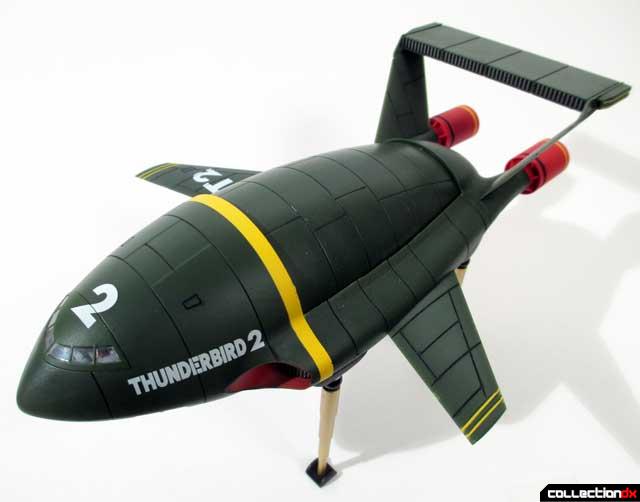 While some people might be critical that it is not die cast or does not include more capsule items I believe Kaiyoda succeeded in making a relatively inexpensive but highly detailed toy of Thunderbird 2, something that has been lacking for Thunderbird toys for many years. I will admit when I first opened the box I was not that impressed with it but after messing around with it over the last couple months and admiring the many details and high craftsmanship throughout I started to appreciate this representation of the Thunderbird 2 and glad an affordable and easily accessible toy has been put on the market by Kaiyoda. I hope Kaiyoda continues to release more products from Gerry Anderson’s many properties including Thunderbirds and Captain Scarlet.

©2013 Photos and article by Leonardo Flores and CollectionDX

2 comments posted
After all the bewilderment

After all the bewilderment for this existing, it's good to know it found a niche!

If you need a better stand, Everything from Tamashii Stages to Figma stands work with Revoltechs.

Yes the stand isn't the best by having a two part base construction, so those alternatives are definately the way to go.

I think overall this release is a nice alternative for a collector who just wants a nice representation of Thunderbird 2 without breaking the bank, for what it does it, it does well, especially in this price range.