The first two waves of Assault Kingdom are pretty much flooded with almost entirely Universal Century designs. So the third wave brought in some variety with three Cosmic Era designs.

Now, I'm one of the few people who actually kind of like SEED Destiny. The show drives me mad, but I do still like it despite its problems. With that in mind, I pretty much hate the Strike Freedom as being one of the most stupidly broken mobile suits ever designed. But this is a pretty good representation of the Strike Freedom. 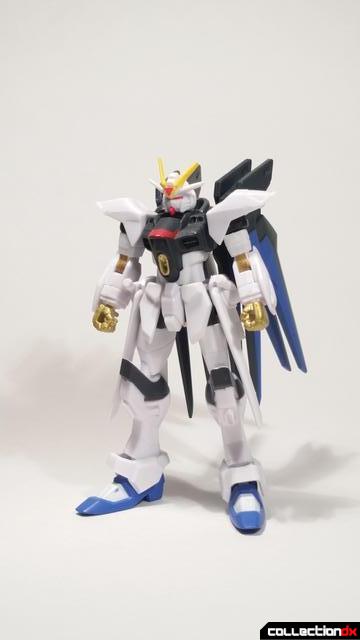 There's a surprisingly large amount of paint on the figure. Although despite that, the back of its wings are still unpainted. But they do look very good from the front at least. 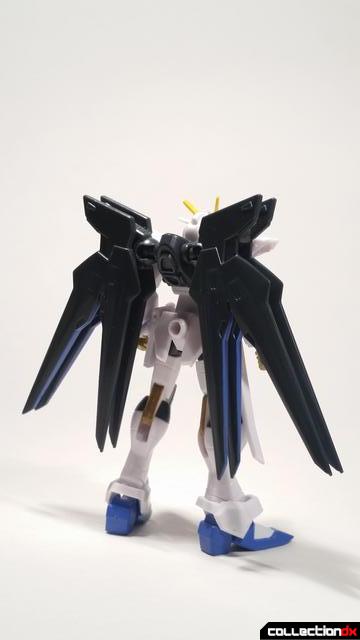 There's a bit of mold flash on the v-fin that makes it look a little funny, but I think it gives it character. 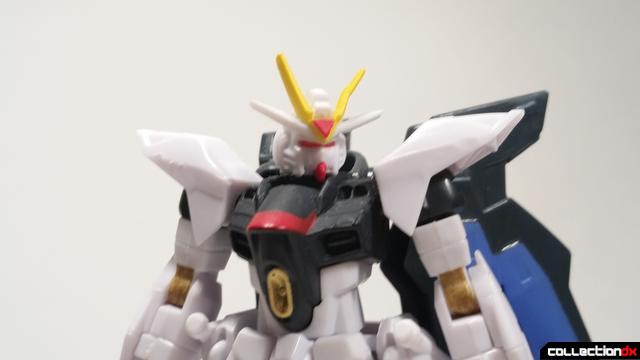 This is the first design in Assault Kingdom with wings and their articulation works great. Their ball jointed into the backpack and also on swivels to allow them to fully splay out. I find that the ankle tilt is a little limited, but the feet are so long that it holds any pose regardless of that. 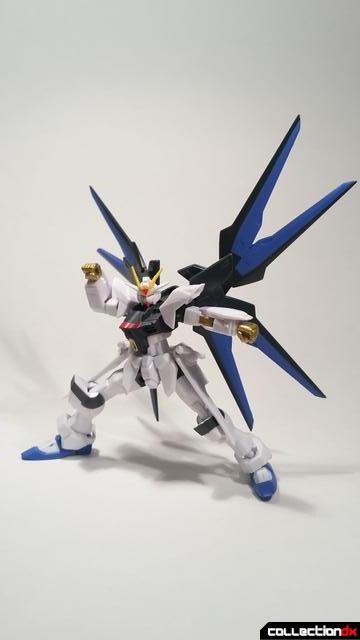 This is one of those figures that really looks good on a stand. 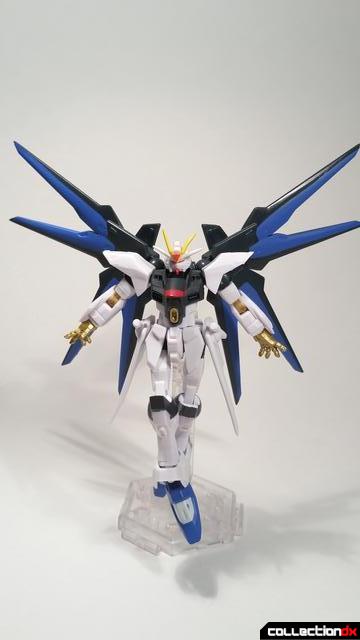 The Strike Freedom includes its two beam rifles with which it can beam spam and destroy everything. 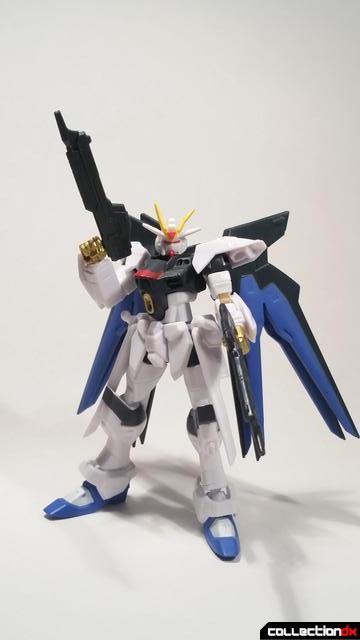 Some paint would have gone a long way to make these stand out, but I can understand why its missing. Plus painted weapons aren't really Assault Kingdom's thing. 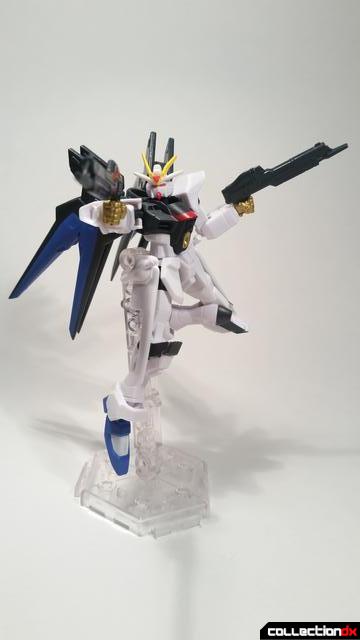 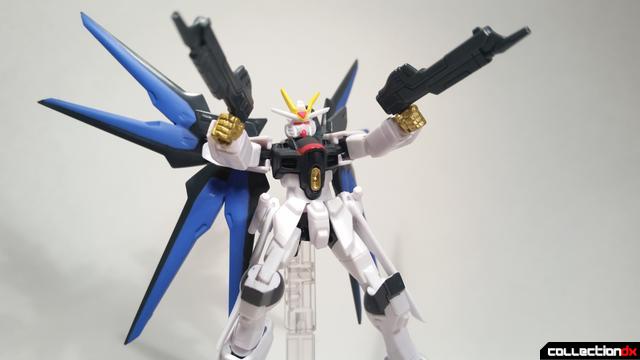 The most important part of this figure though, is that it is the first figure in the numbered line to include a beam saber! It's solid red, but an ever so valuable commodity for those who want to give their other figures some melee weapons. 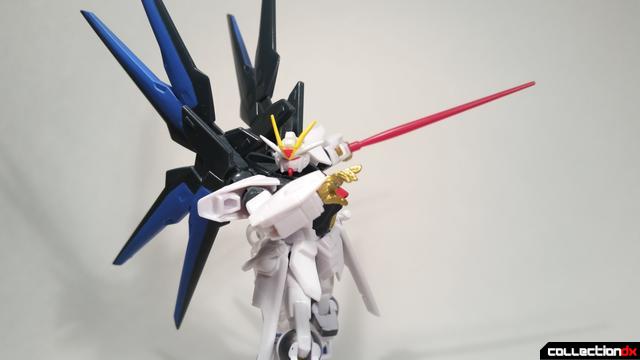 With it, Strike Freedom can do that stupid thing where it holds the beam saber backwards. 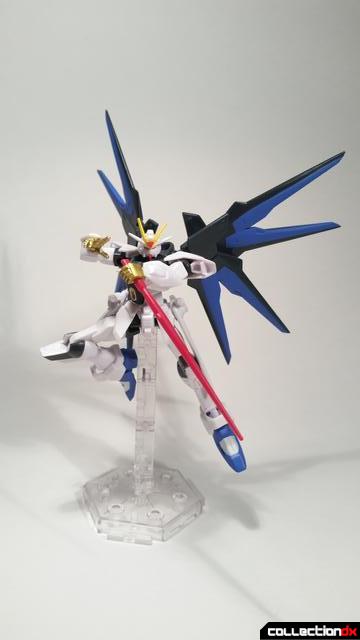 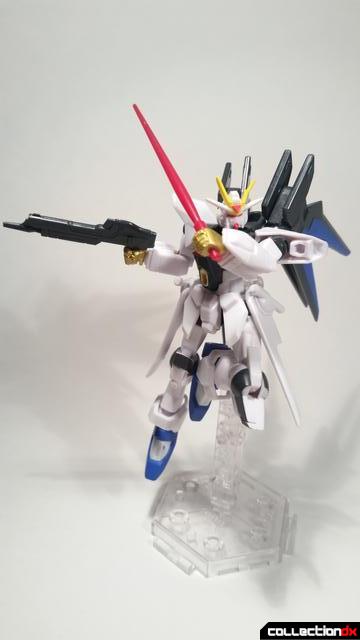 Assault Kingdom continues to be ridiculous and ambitious with its extra accessories. If you collect all four base pieces from this wave of Assault Kingdom, you can make a freaking METEOR unit from SEED. Which is basically even more ridiculous beam rifle and missile spam as if the Strike Freedom wasn't broken enough. It's huge, but not huge enough. It's a good effort by Bandai even if it does look a little silly. 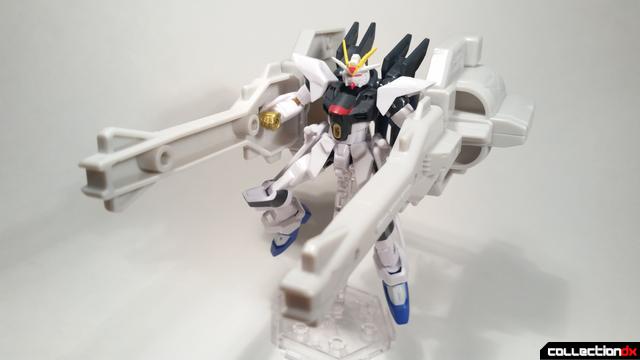 Also don't look at it from the back. 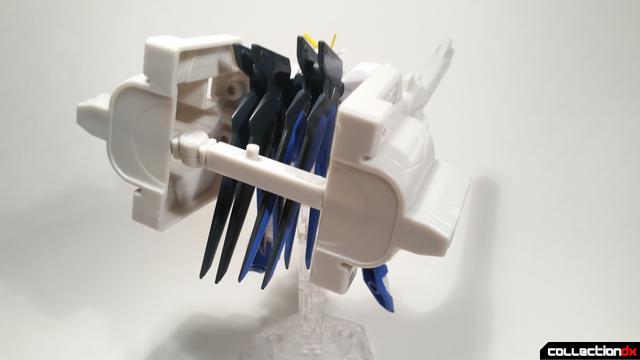 The Strike Freedom is a mobile suit I and honestly say I hate. Despite that, it is a very good figure. With two guns, a beam saber, and a fun set of wings it's a solid release (Even if it is a broken mobile suit). 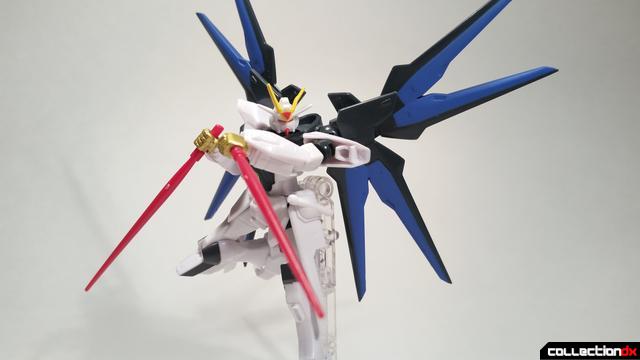 I don't know why, but I can't stand the Strike Freedom because of those awful gold-colored joints.