Sakurada Hiromu: leader and red-clad member of the Tokumei Sentai Go-Busters. Fueled by the hope of saving his family from the realm of Messiah, Hyperspace, he trains and fights alongside his fellow Go-Busters, Buddyroids, and Buster-Machines. To save the earth and his family from the clutches of the Vaglass is his goal.

With this, Bandai gives us the S.H. Figuarts Red Buster from the Toei Tokusatsu show entitled Tokumei Sentai Go-Busters. Though Bandai has done a fine job turning Red Buster into a toy, the figure falls short in a few big ways.

Packaging:
Red Buster comes in the default S.H. Figuarts packaging. The box is open faced and sports some very nice graphics on it; a treat, for sure. 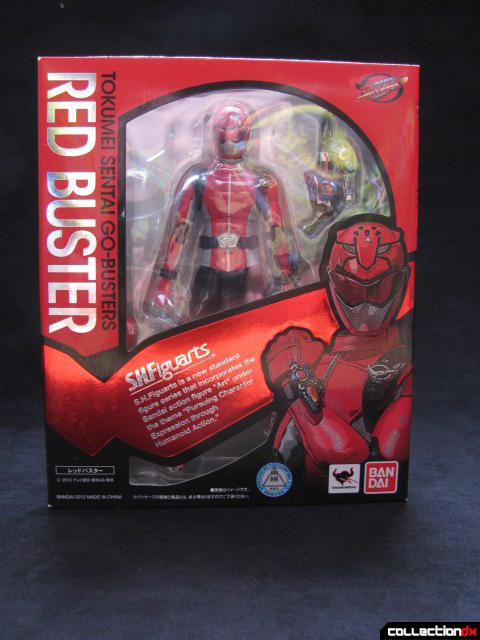 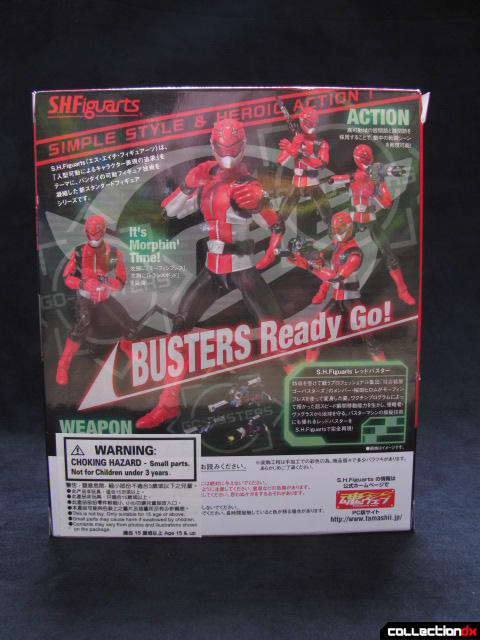 Aesthetics:
This figure looks pretty great. The red and blacks are perfectly matte and dull thus making them look like leather; all the paint is well applied with no mess. 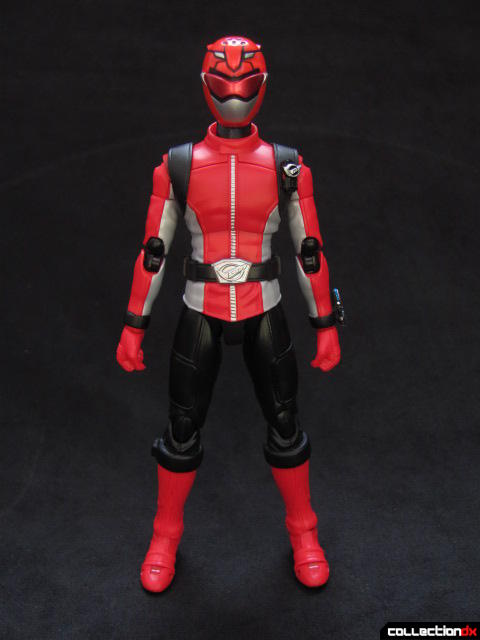 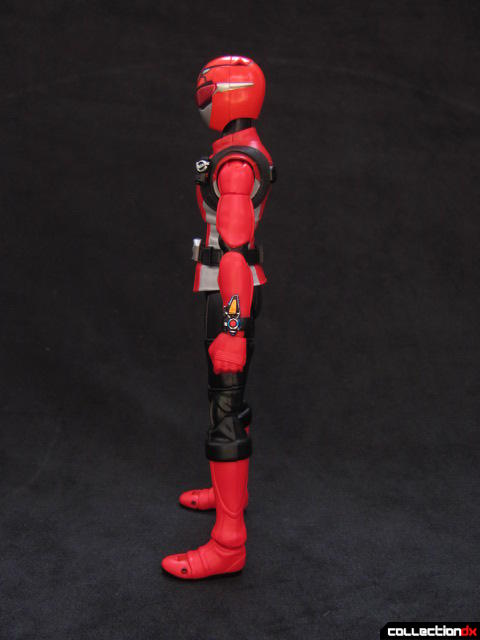 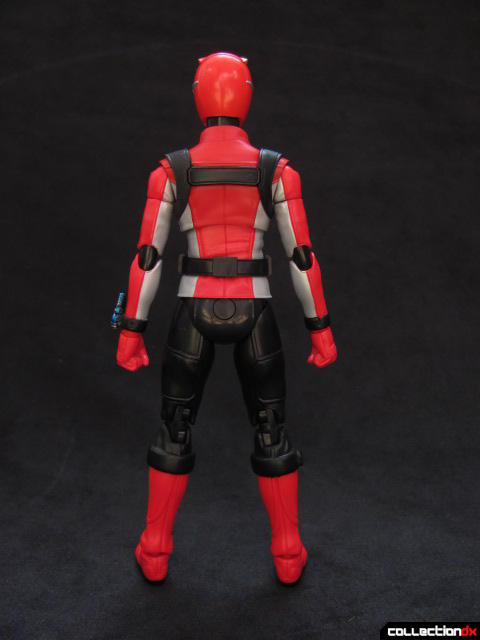 All the bigand little details of his suit are present: zippers, Morphin’ Brace, and Transpod. For being on such a miniscule scale, these items look great with good paint and sculpted detail, especially the Brace. Sculpted detail is also present for boot folds and jacket bundling, making the whole toy resemble quite well its live-action counterpart. 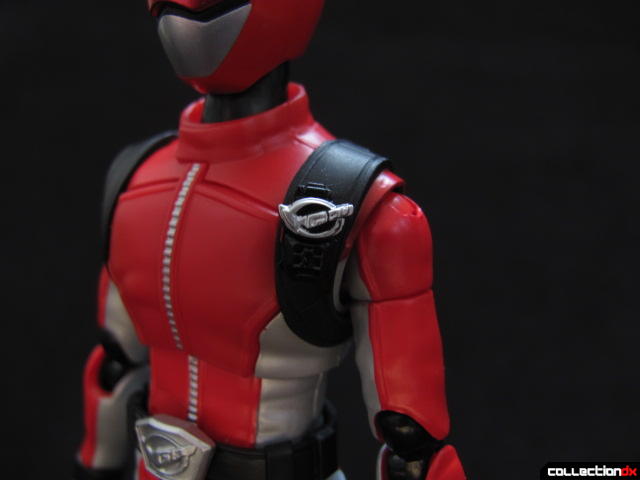 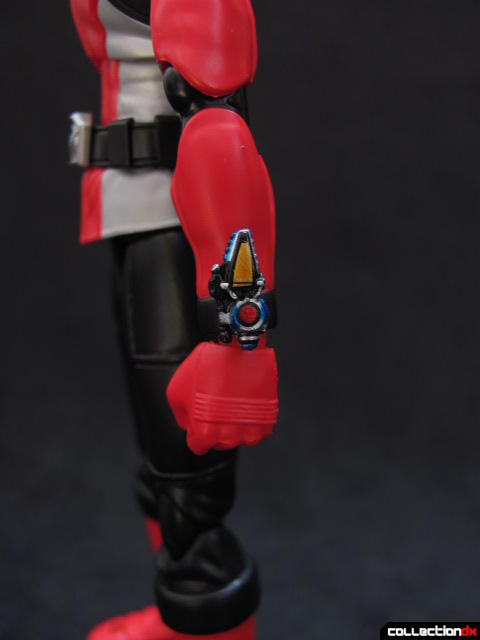 The helmet looks great, too, with its shiny visor and outlined animal features. If there is one thing wrong with it, it’s that the shade of red used here is not exactly the same as the rest of the figure. 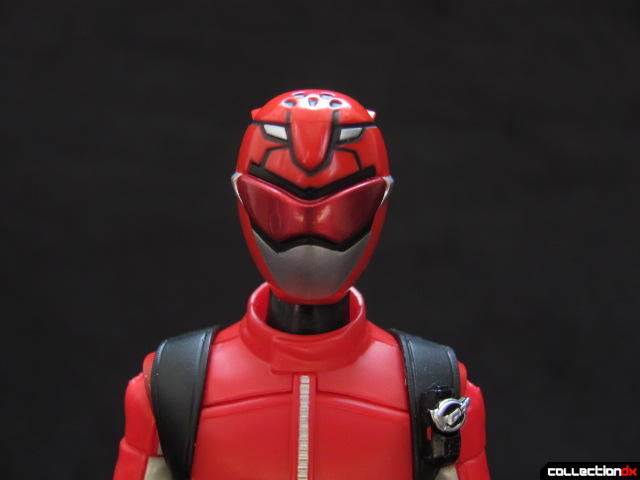 One point of contention, though a small one, is that the arm joints do not match the area that they are in color-wise. This would have been difficult to do with the two colors present along the arms, so I’m not miffed that they did it this way; it just makes sense.

Articulation:
Red Buster sports a grand display of articulation, a S.H. Figuarts staple. He has an expressive double-ball-jointed head, bicep-swivels, toe-joints, double-jointed knees and elbows, the whole nine-yards, really. His ab-crunch is a little hindered by the stylings of his, suit but it works adequately well. 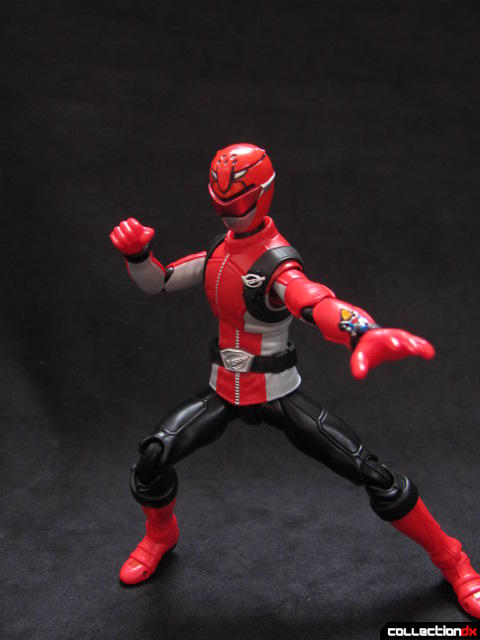 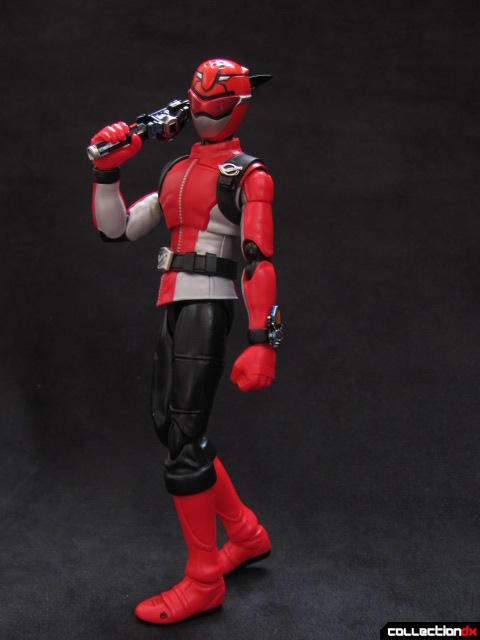 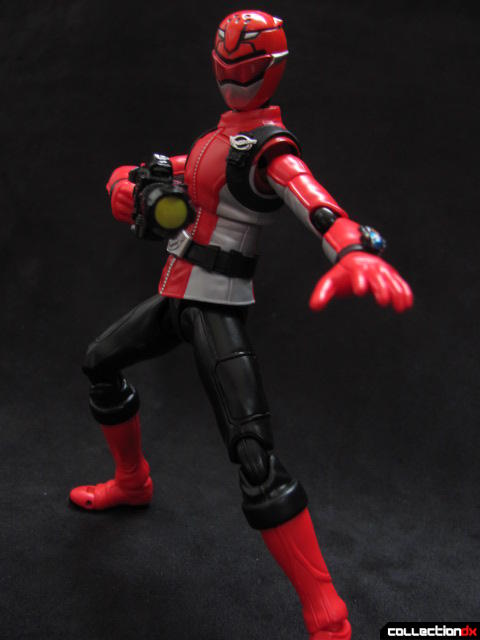 There are two things that bother me about this figure, and they’re both about the feet: they’re not metal and they are only ball-jointed. The feet being metal would help this light figure to balance and hold poses much better, though that’s not too much of a problem since the ball-jointed feet do not allow the superb range of poses that regular Figuarts feet would allow. This is disappointing and leaves me a little cold. 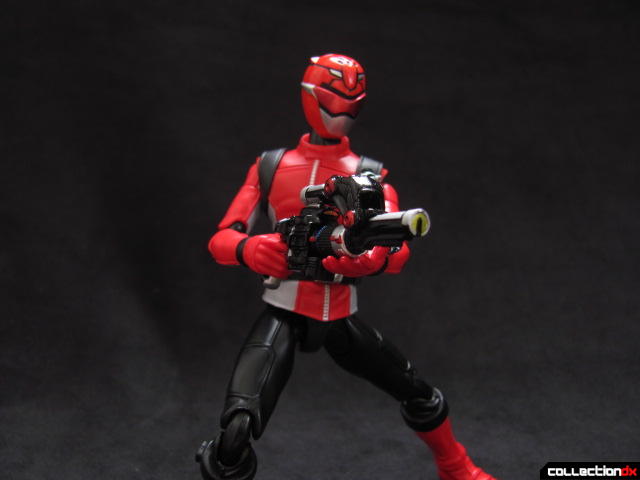 His arms aren’t limited in any real way, but I just want to point out here, at least in my attempts, that Red Buster cannot reach fully across his chest to touch his Transpod. Sad day. 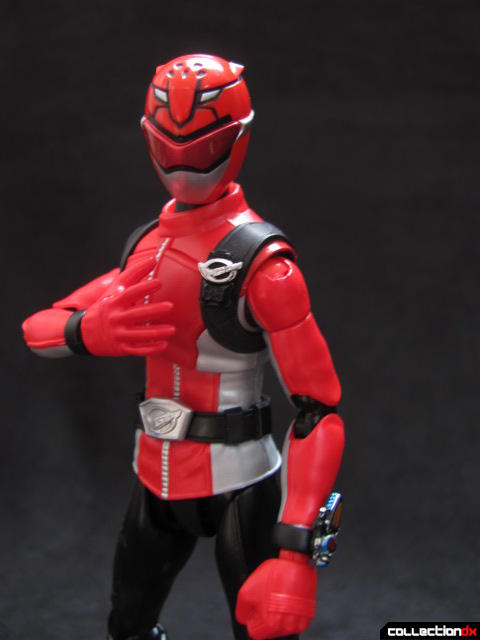 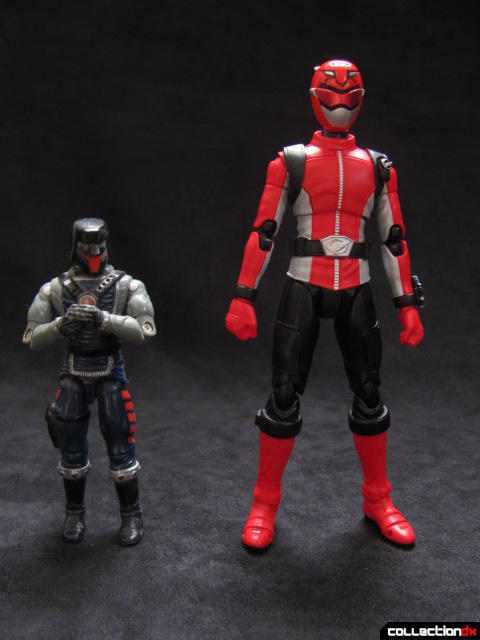 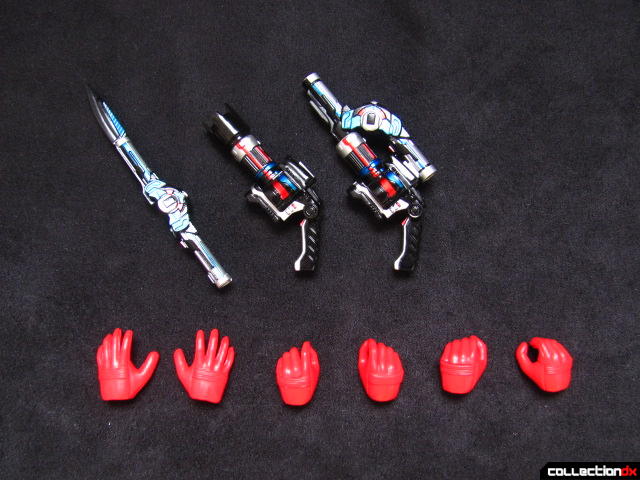 The weapons look great, their paint being excellent and deep, and detail being rampant. They have a good feel and fit right in Hiromu’s hands. 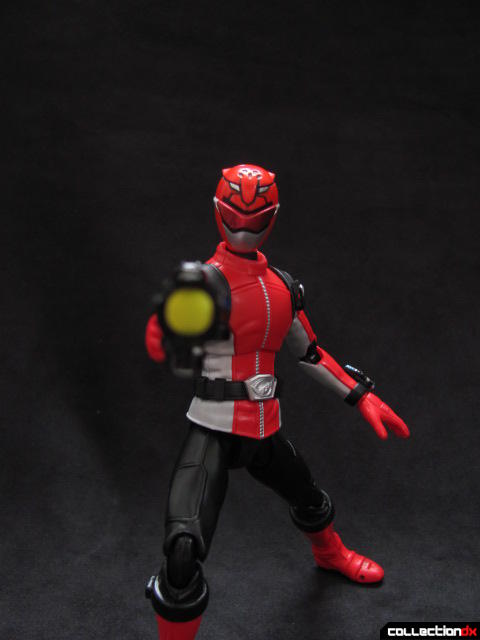 It would have been nice if the blaster and sword were also available in their binocular and camera modes, respectively, but there’s not too much missing without those.

The hands sport a major problem, though. I’m not sure if this is my toy specifically, but the holes in the wrist of the hands are much too small for the ball-joint on the arms; you have to stress the plastic just to get them on, and then they don’t fit well afterwards. It doesn’t even feel like the balls slip into the holes and create a joint. It feels more like the hole is crushed around the peg, which is very disconcerting.

Gimmicks:
The standard for the Figuarts line: being highly articulated. Red buster fits the bill.

Closing Remarks:
The Red Buster Figuart is a nice rendition of the suit used in the show; it looks nice and matte and sports all the detail of its on-screen brother. The accessories are varied and make play and posing fun. The figure with its lack of metal and properly articulated ankles, light-weight, and poorly made hands, however, make this a hard recommendation from me, even more so at full price. The overall quality here, to me, just doesn’t justify the price point. Consider buying this figure when it’s on sale. 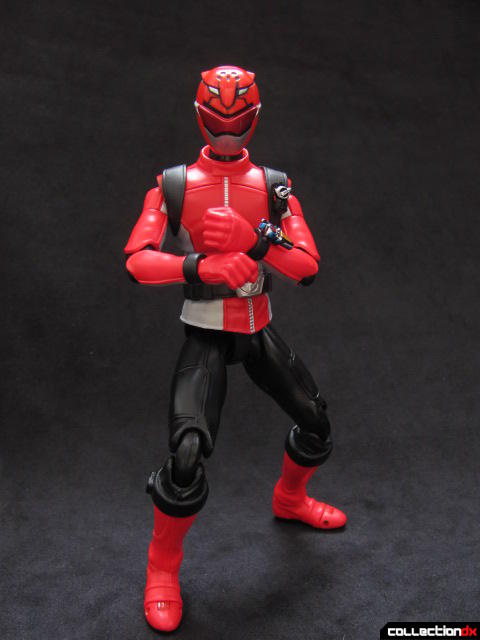 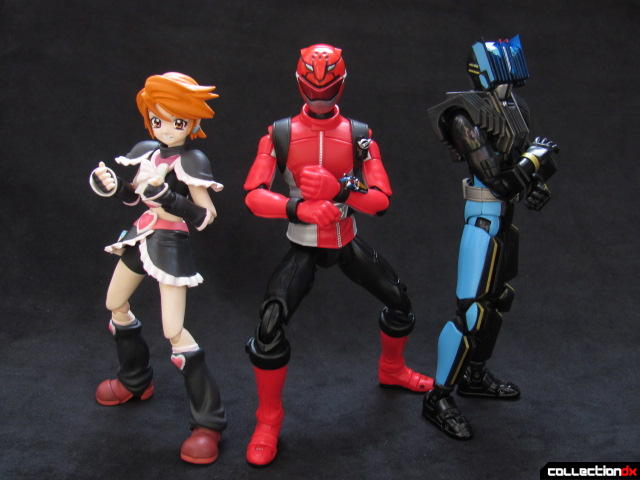