Super Review Wars DX goes into overtime with a review from one of our very talented writers from OtakuDX.com

Like a whole lot of other people around the world, Madoka Magica kind of caught me by surprise. I like to tell people that my favorite genre of anime is messed up, so magical girls are not exactly my go-to kind of show. I didn’t count on Gen Urobuchi and his twisty imagination, though, and Madoka Magica, with its beheadings, hopelessness and yes, goddess transformations, really hooked me. So I expressed my pleasure with the show the way I always do: with figures. Because I’m batty for Nendoroids, I quickly picked up the magical girls. But the one I really wanted was Ultimate Madoka in Nendoroid. 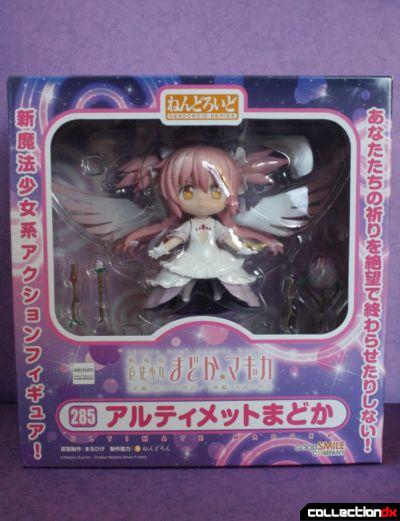 Even in the box, you can tell this is going to be good. 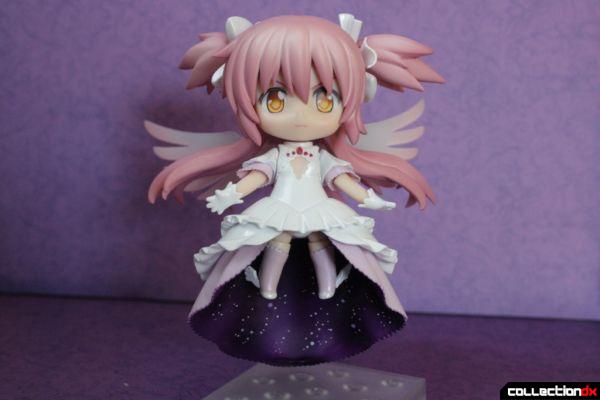 She’s just beautiful. With all the pinks and purples, she may also be the girliest figure I own (and that‘s saying something). 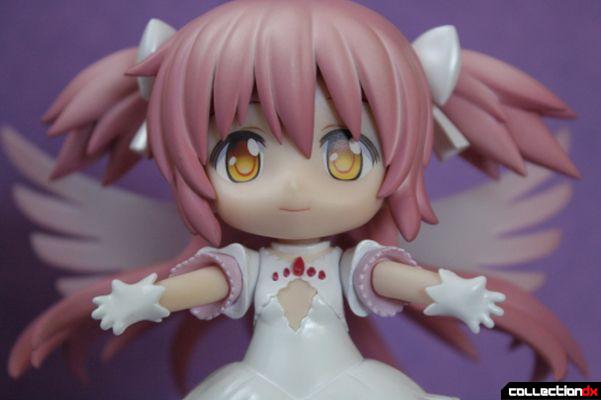 Here’s a closer view of her face and upper body. You can see a lot of really lovely details, like the fade in the paint job on her hair, at play here. 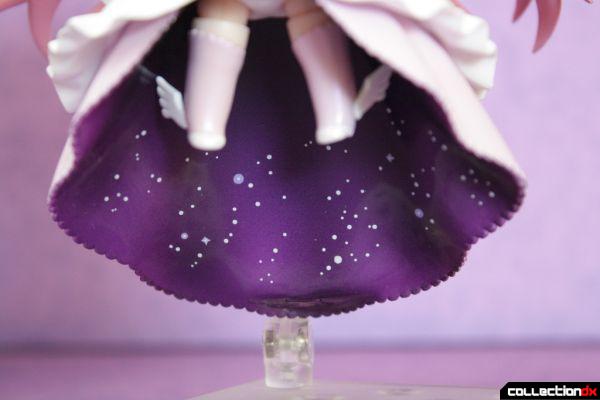 Ultimate Madoka’s skirt is one of the better parts of this figure (and character design, really). She’s got a scattering of stars and universe in her skirt, further reminder that she is a goddess. Because honestly, if girls got powers of divinity we would totally abuse that to make clothes.

From the back, you can get a better look at her wings, hair, and the base. 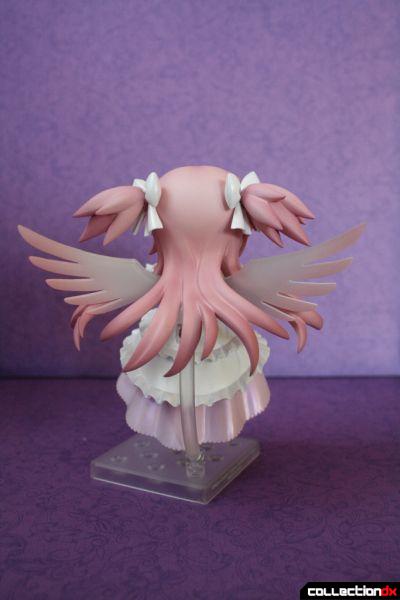 Her wings are just lovely. They feel delicate to the touch (in the way that makes you mentally swear while handling them for fear of breaking the things), but again, it’s the paint job that I really love. That said, you can kind of see the biggest problem I have with the figure here: the stand. 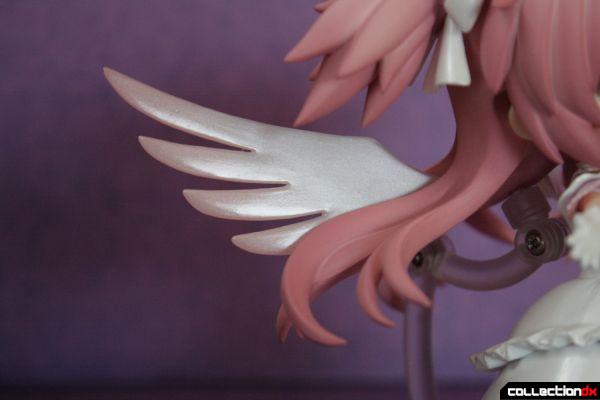 Usually the stand on Nendos plugs into the back, but on Ultimate Madoka it plugs into her hair. This creates a world of frustration when posing her - specifically, her head and arms. The stand also posed a less visibly obvious problem: that top hinge is fairly loose, and loosens up a hint more every time I move it. I spent a lot of time picking her up off her base after she gracelessly (and suddenly) slumped down, fell over face first, knocked her own arms off while turning her head, etc. More on the arm thing later.

Madoka has a set of hands that look kind of like she’s praying. 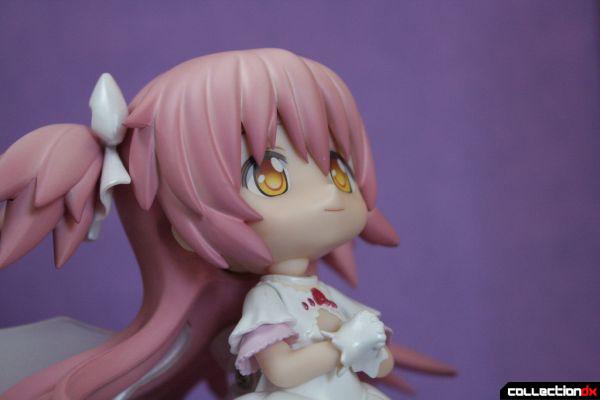 But since she’s a deity, is she praying to herself?

The real problem with the base happens when you give Madoka her bow and arrow. 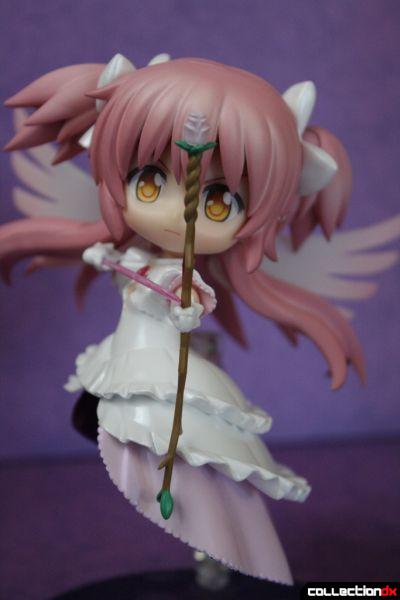 If you try to turn her head so that she’s looking down the arrow, as someone would when they’re actually shooting an arrow, you get to a certain point before the arm on the back of the arrow bangs into the base where it plugs into her hair. This really limits her movement, and is kind of frustrating.

It got even worse when I upgraded her to her bigger bow. 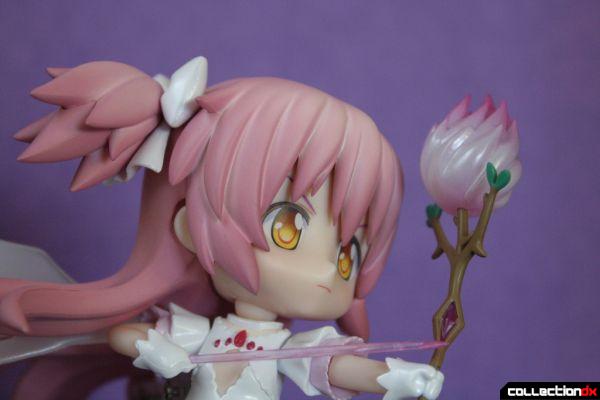 Sometimes all it would take was a gentle nudge to knock her arm right off the shoulder. I’d really like her to go full Katniss Everdeen, but sadly that is not to be.

There’s one extra bit to her base I’d like to talk about. The giant Ultimate Madoka statue that Good Smile made has this utterly lovely circular base. It’s a fantastic touch. 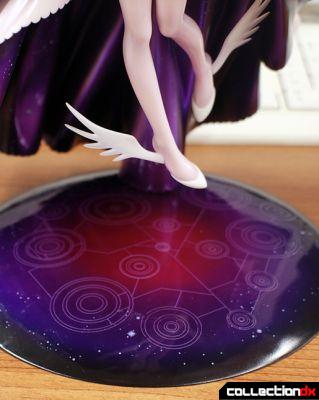 Nendo Madoka has something… similar. Ish. She has a little floppy plastic disc that sits on top of her base, mimicking the scaled Ultimate Madoka figure. Only… not. 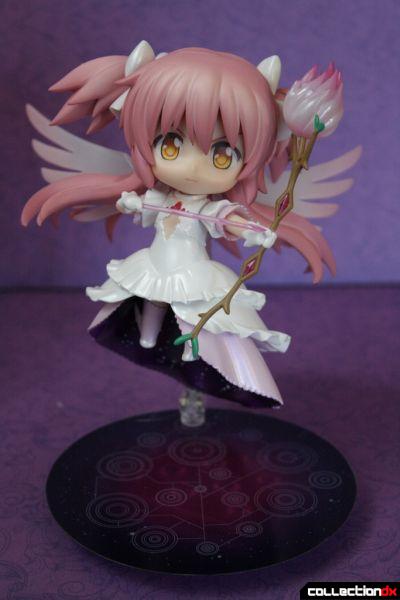 It’s kind of goofy and cheap.

Goofy cheapness and obnoxious stands aside, this is a figure I literally pined after, and now that I have her I am not disappointed. She’ll be one of the focal figures in my collection.

Wow, a friend of mine has the Ultimate Madoka Figma, and I think the galaxy print inside her skirt might be better done on the Nendoroid than on the Figma. On the Figma it's just a bunch of little white dots, as I recall... the differing sizes and the little four-pointed twinklies feels a lot more "animated" than the Figma's paint job.

Are these pictures of a bootleg figure? The face looks shiny and your problems with the fragility could be explained by it being a bootleg...