D-Arts has been knocking it out of the park with their terrific Pokémon video game action figures this year, starting with the terrific Mewtwo (with tiny bonus Mew!) and Lizardon/Charizard, the big popular Pokémon dragon. Having created arguably the most popular larger Pokémon characters in amazing action figure form, it made sense to move onto Blastoise and Venusaur, the evolved forms of the Water and Grass element Pokémon trainers first got to choose from in the original Pokémon Red and Blue games; Charizard being the evolved form of the fire element Pokémon, thus rounding up the three. 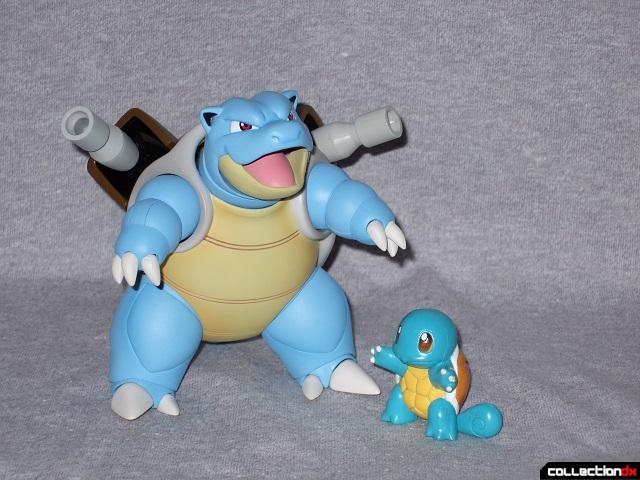 Blastoise isn't one of my favorite Pokémon, with a more minimal presense in the anime than some of the other larger Pokémon, but he's eternally won my heard with his hilarious cameo in the Super Smash Bros series, wherein he appears from a Pokeball and angrily yells "BLASTOISE!!" while he blasts away at your enemies. It's hilarious. Already having been impressed by Mewtwo and Charizard, I was expecting to dig this action figure, but I wasn't prepared for how much I would like him: Blastoise is one of my fav action figures of the year. Why? Read on!

Blastoise is an absolutely amazing toy - the sculpting here is perfect, dare I say even better than Mewtwo and Charizard. 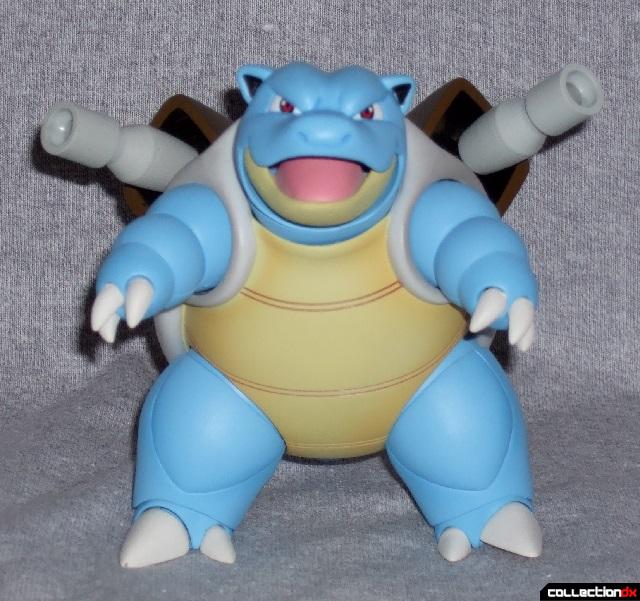 Every detail is captured here, from his sneering face to his sharp claws to his awesome oversized turtle shell. What blows my mind here is the way in which the sculpting brings the 2D character into 3D while retaining the animated look; similar to NECA's spectacular Borderlands figures, he looks as if he's a cel-shaded 3D model, as if he's emerged directly from a Pokémon Stadium game. This is in part to do with the simplistic design, which has been sculpted immaculately, but also to do with the terrific paint. 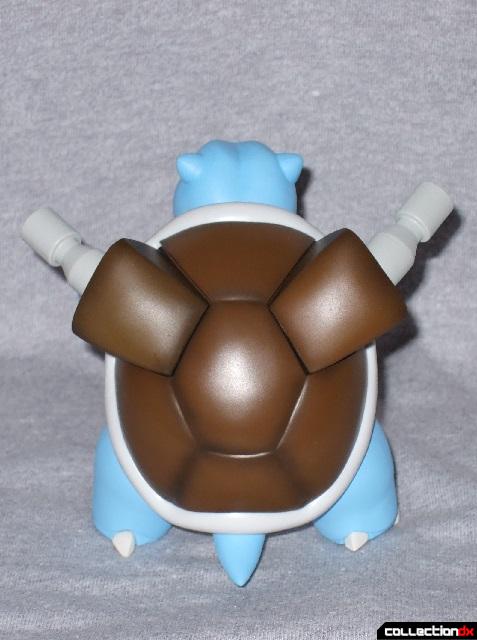 The paint aps on Blastoise are stunning, with perfect colors at every nuance. Undetailed areas are given detailed with the most slight shading, whereas all of his corners and angles are given darker lines to bring out this superb "animated" look that means you can mix him with any animated action figures you have as well as all your other toys. Which is to say he'll chill with Claptrap, He-Man or Gandalf, no problems. I love this toy. 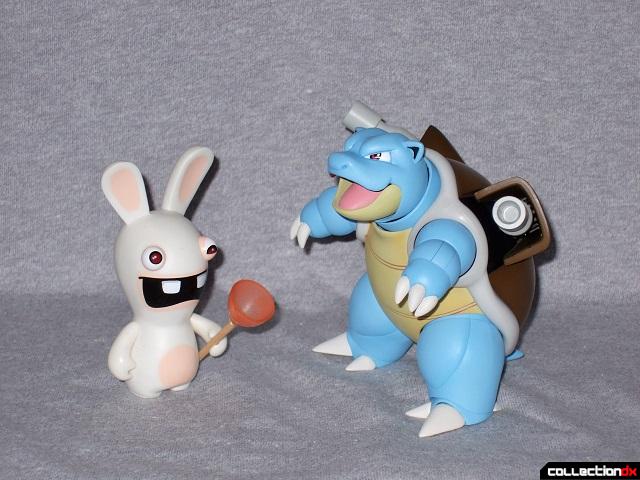 Despite his fairly statuesque design - one never sees Blastoise outside of his single stationary pose - this guy is absolutely loaded with articulation, and it's great. Each of Blastoise's thick round limbs features a ball joint, including his elbows, so you get a fair amount of movement out of his arms and legs, and each of his claws has articulation too. His jaw has a hinge so you can get several different sneering expressions out of him, and his head sits on a ball joint that enables him to look all around him. The water cannons are also similarly articulated, allowing you to aim them in any direction, and the openings from his shell are also hinged. This is much more than I could have ever imagined, and none of them get in the way of the sculpt - he's brilliant. 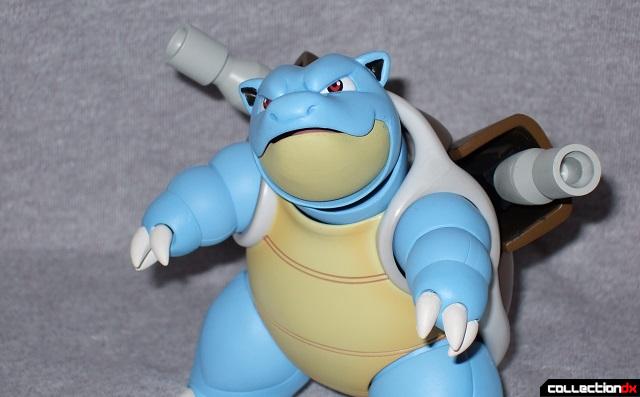 Because of his relative lack of activity across the Pokémon media, Blastoise isn't quite suited for accessories, but the ones included are terrific. First up, Blastoise features a base like the other D-Arts Pokémon, in the shape of the Pokémon 3D modeller, as well as an arm that doesn't do a great deal but potentially keep him in any poses. 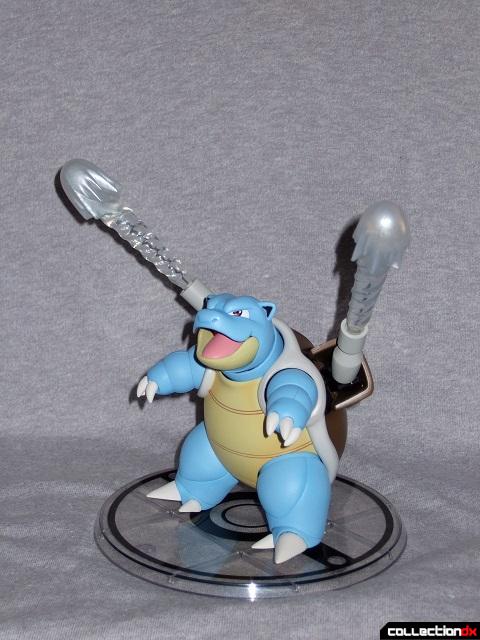 But the main attraction here are the water effects for his cannons, which plug in and give the look of him firing off a blast at his opponents. Combining the cannon articulation with this enables you to shoot them wherever you want, and I've found that he isn't top-heavy because of his bulky size, so there's no risk of him falling over. It's fantastic.

I absolutely adore this guy. I had expected to love Mewtwo and Charizard, but Blastoise has actually overtaken both of them; he's just terrific fun to display and play with, and I think he has the best sculpt of the lot thus far. I love turning his head and moving his jaw to change his expression, and then have him blasting away at Pokémon and other toys. 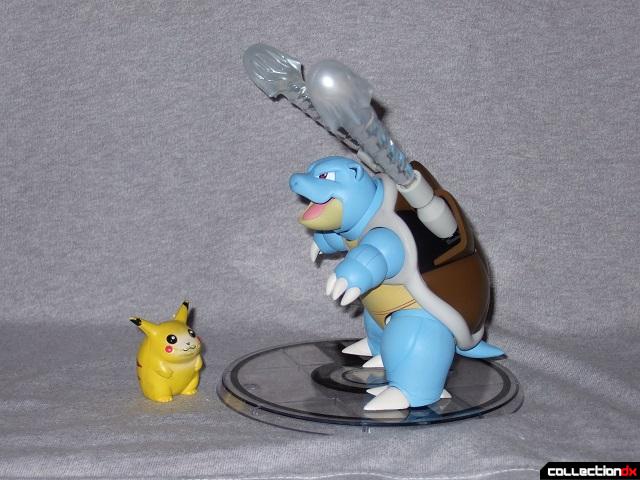 There's also something to be said for toys that don't require constant readjustment to keep from falling over or to holding one pose; he is just going to stay put without issue. One of my top action figures of the year. Pokémon fans and collectors won't be disappointed with Blastoise.

To be honest, I actually was a little disappointed with my two Blastoise. Mine tend to fall over quite easily if he's not standing absolutely straight without the water spouts in. Plus, with mine the feet and legs are just...dissapointing. There's range, but it's OUTWARD range. So while I can move the feet and legs pointing out easily...pointing them inwards so he can actually stand flat is a bit of a chore. I still absolutely adore the figure even despite the legs and feel the head, arms, and cannons are amazingly executed...but...of the four Pokemon D-arts (of which I admittedly have two copies of each cause I'm a HUGE Pokenerd) he bottoms out my list. But as far as sculpt goes I will agree he definitely looks the best, with Venusaur coming in a close second (for me, at least....I'm Venusaur biased...)

...Regardless of being the bottom of my list though, I would LOVE if Bandai made a shiny repaint of this. Shiny Blastoise was my starter in Fire Red and that would be the greatest thing ever.