You know, the world probably has enough Gundam toys. Especially of the RX-78. There is no denying it is an incredibly iconic robot, but the number of toys of this guy is just downright ridiculous.

Yet despite that, here I am reviewing another RX-78. Although to be fair, this one has its charms and reasons for making it stand out. 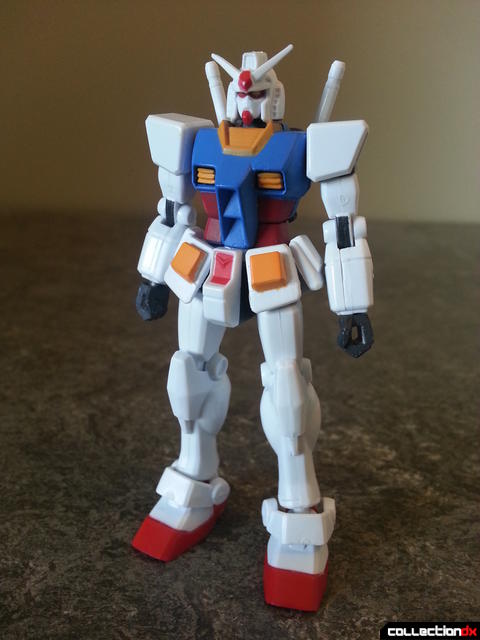 This is the Assault Kingdom RX-78. Assault Kingdom is a line of candy toys in Japan that cost about $5 each. For those of us in North America, Bluefin Tamashii Nations has been able to license these for distribution for retailers. That's actually how I found mine: at a local comic shop just sitting right on the counter. I bought one of these guys out of curiosity, and had to quickly get the rest after I realized how awesome they were. 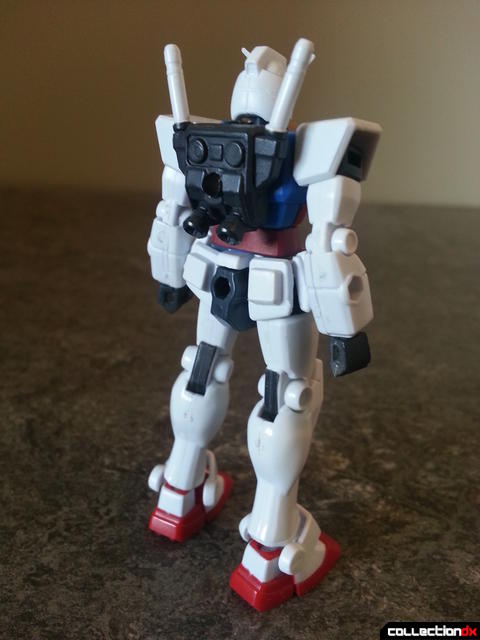 The first thing you'll notice right out of the box is that this guy is small. On the packaging it says he's about 80 mm, which after doing some math is roughly 1/225 scale. If that means nothing to you like it does to me, here he is next to your average 3 ¾” Iron Man action figure. 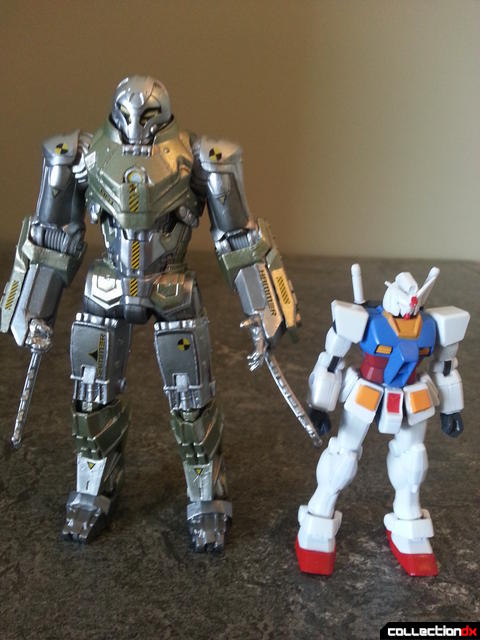 The sculpting and paint work is pretty simple. It's a little messy with some over spray on some parts, and some of the finer paint details are missing, but considering his incredibly small size, I don't mind. 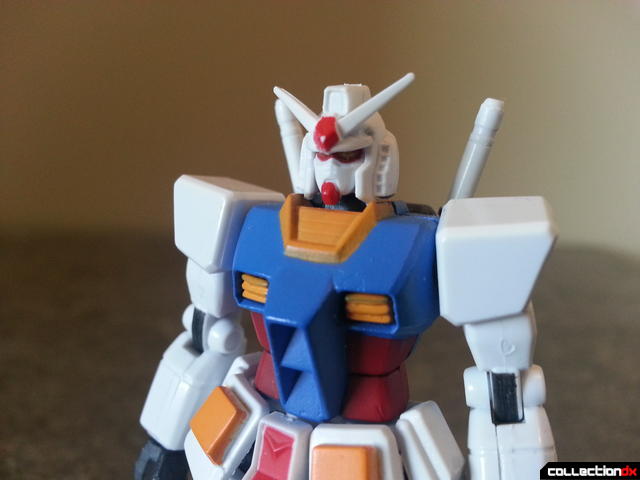 The Gundam is made up of mostly hollow ABS plastic and rubbery PVC for the joints. This means he's incredibly light and poses like a dream. Although he doesn't have double joints on him, the hinge joints on his elbows and knees get a more than satisfactory range of motion. Look, he can even do the Iron Man pose with ease. 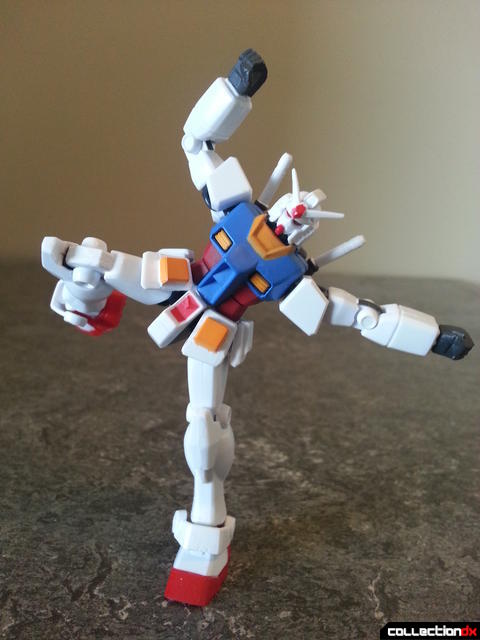 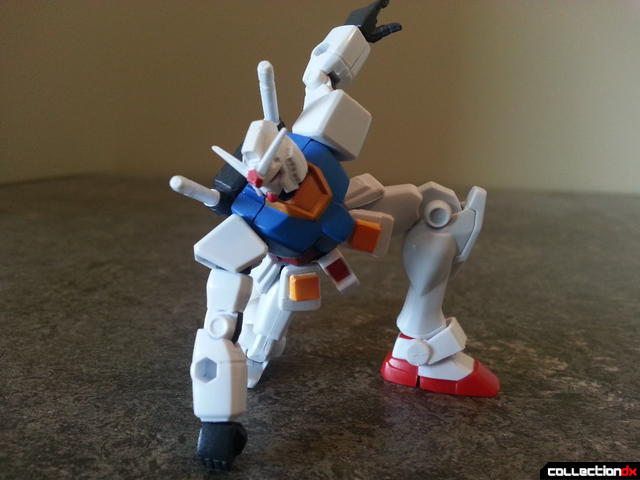 It's worth noting that the ankles are pretty different from what we're used to seeing. They're ball jointed, but instead of having the ball go right into the leg, it's on a bar that bends into the leg instead. This makes his ankle tilt range pretty damn impressive and lets him do stuff like this. 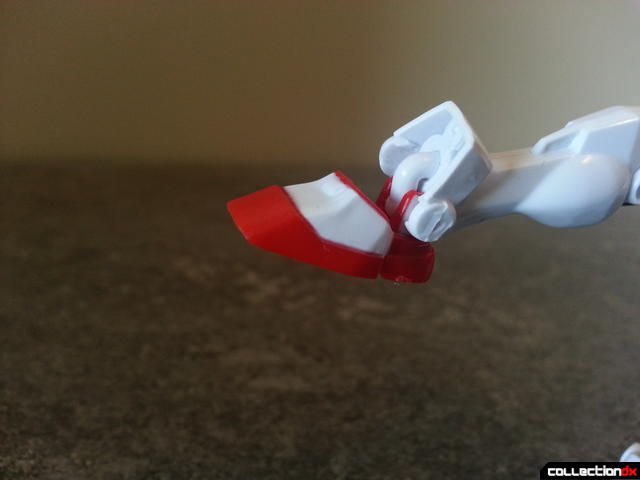 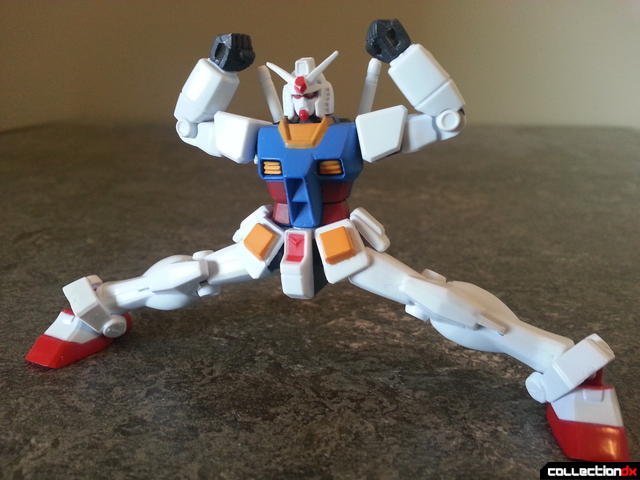 On top of being pretty poseable, he also does come with a few accessories. In addition to the fists on him, he has splayed hands as well, along with his standard shield and beam rifle. 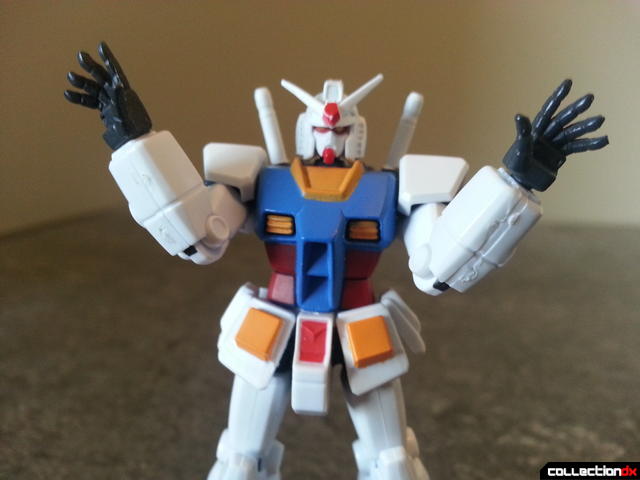 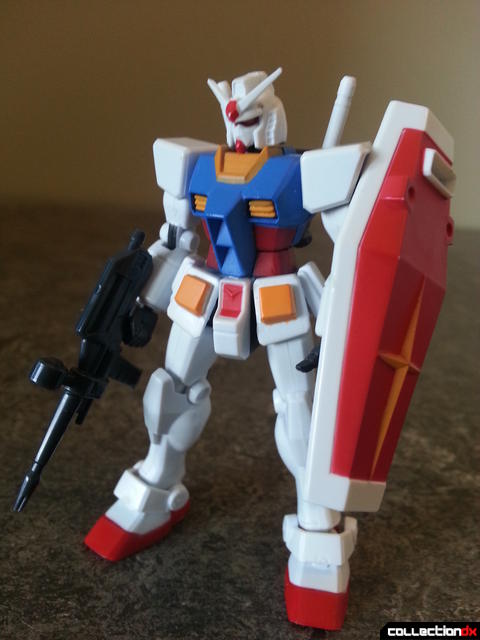 The shield can mount on the various peg holes on his body, including his foot even though I didn't take a picture of that because it looks silly. 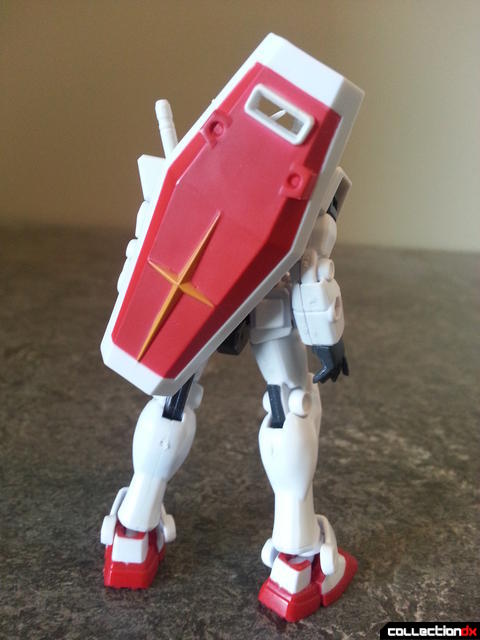 With his weapons in hand, this little Gundam goes from being just a fun little toy to a micro-sized display piece. 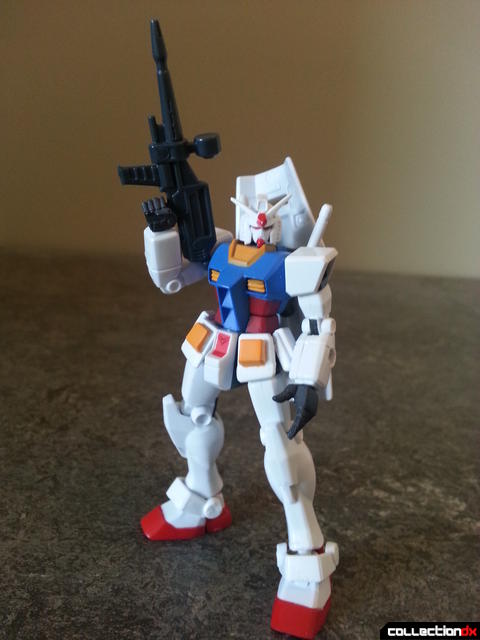 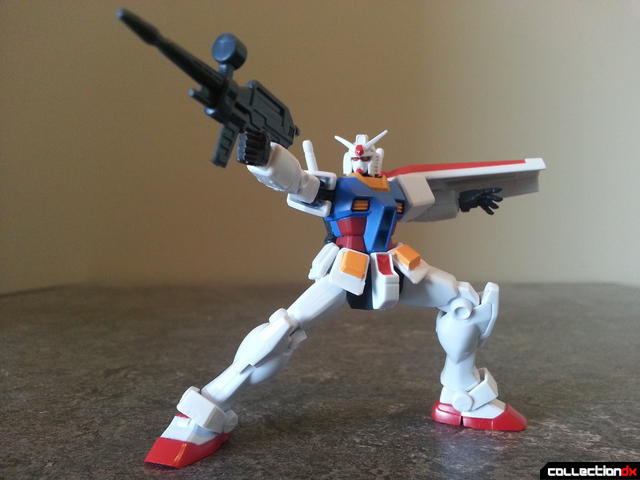 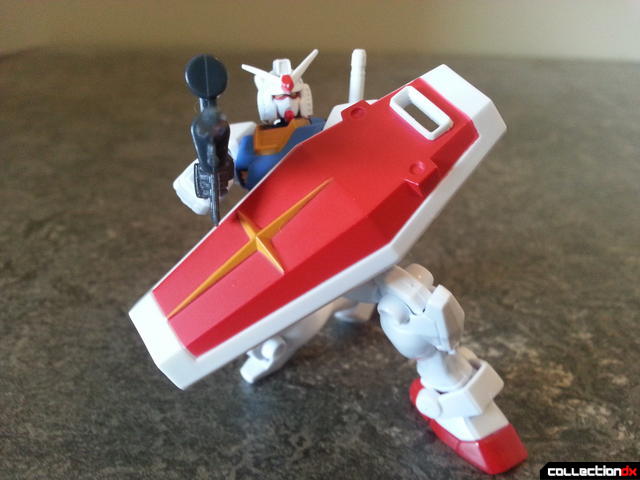 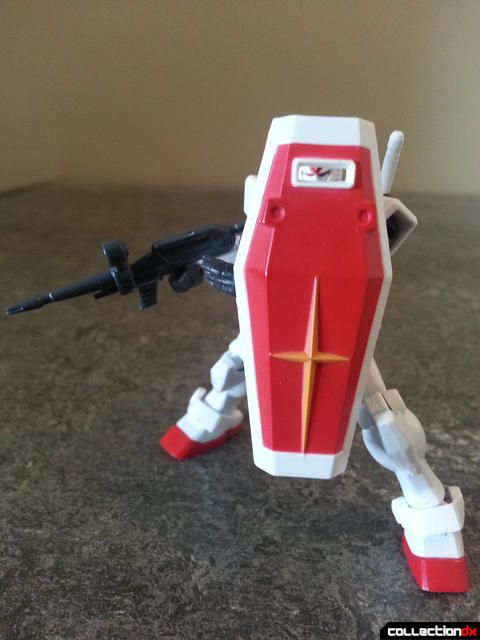 As if all of that wasn't enough, he also comes with several pieces of extra plastic which can be turned into a small stand. This really further cements for me how this little guy is not just a toy but also a tiny little display set. It's the same thing I really like about some of the more recent SIC Kiwami Tamashii releases. 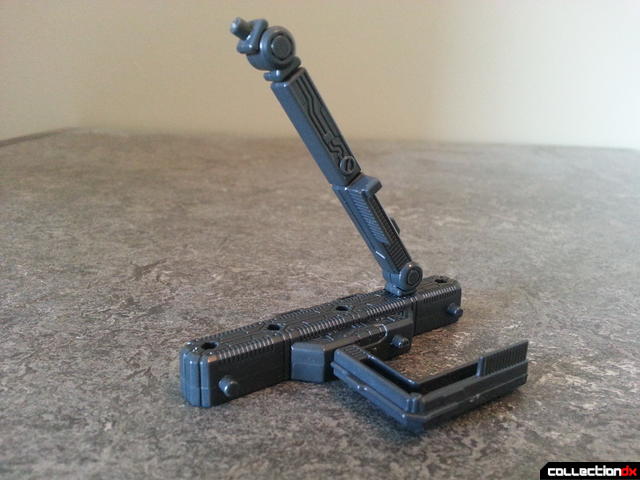 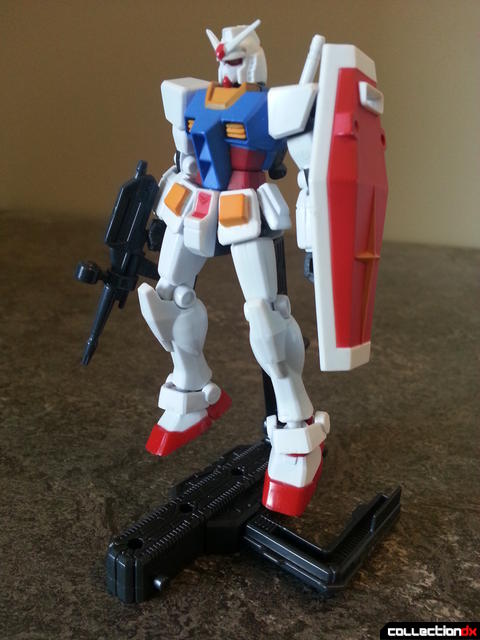 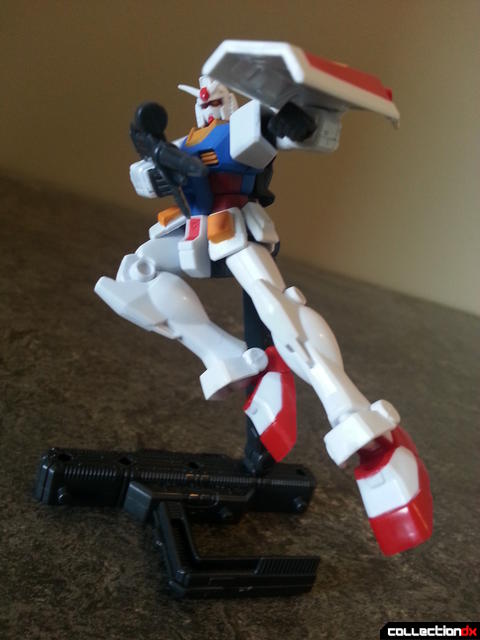 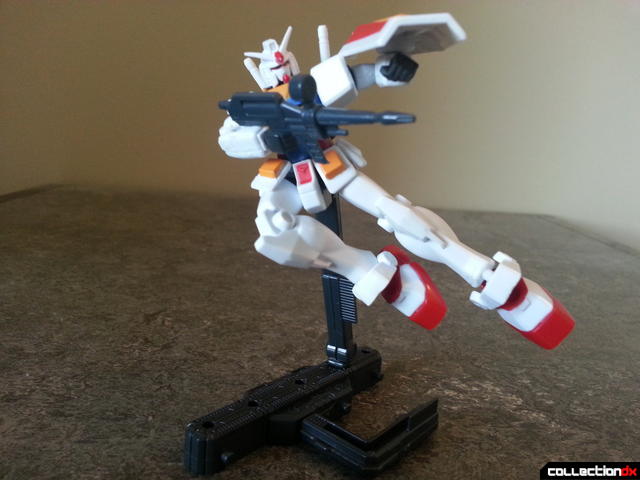 Assault Kingdom RX-78 is definitely just another RX-78 Gundam release. There are figures that have been released that are more detailed or more poseable, but something that is just downright fun about this guy. His small size and simplicity is what makes him one of the most fun pocket toys I've seen in a long time. That combined with his incredibly low price makes him a figure I highly recommend. Just get this guy instead of a hamburger next time you're out. I assure you the Assault Kingdom RX-78 will be much more satisfying. 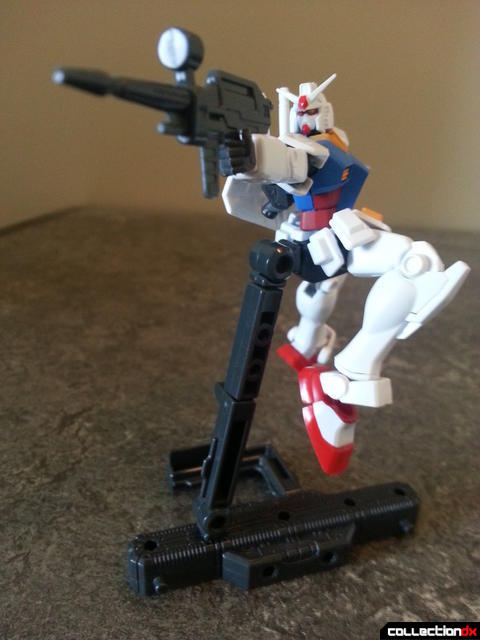 5 comments posted
*GASP* I WANT IT WANT IT! I

*GASP* I WANT IT WANT IT! I had heard of the Assault Kingdom name but never bothered to look into it because...well, because of your statements right at the beginning: I have a ton of Gundam toys, and the RX-78 is certainly one of the higher numbers in my collection. But this? I'm totally up for tiny stuff! And anything else in this line as well - I gotta find me some of these! I'm such a sucker for tiny stuff.

Didn't they do Zakus as well. Im a zaku fan myself.

Yeah. It's a relatively young line, and fairly Gundam heavy right now, but they did Char's, and there's a upcoming set of Black Tri-Stars high mobility Zakus that looks really fantastic.
I didn't realize that these were getting imported. I hadn't given this line much thought, but I might need to find a couple now. Time to start hunting for the Kshatriya, I suppose.

I thought it's based on a gundam video game or something.

Oh, and that fig is very cool. Probably cooler than those Robot Damashii lines.