Accel World in a nutshell is a show about a fat loser kid named Haruyuki Arita who starts playing a video game called Brain Burst, which allows him to accelerate and fight against other Duel Avatars in order to be the first to level 10. Although some people weren't too keen on the show, at the very least most people can not deny that the designs for the various avatars in the game were actually quite cool.

This is Haruyuki's Duel Avatar which is known as Silver Crow. An interesting thing about the Brain Burst game is that the Duel Avatars are designed based on what the user's psychological fears and desires are. Haryuki has always wanted to be the fastest and go beyond everyone else and his Avatar is accordingly quite different from his real life appearance. He's an incredibly lanky design with a lithe frame and incredibly long arms and legs. 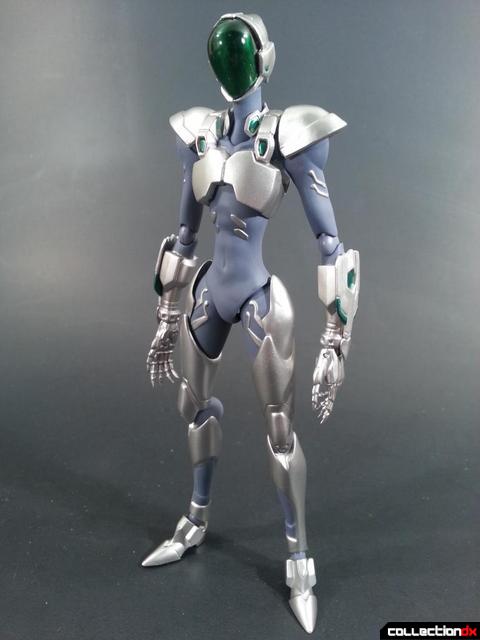 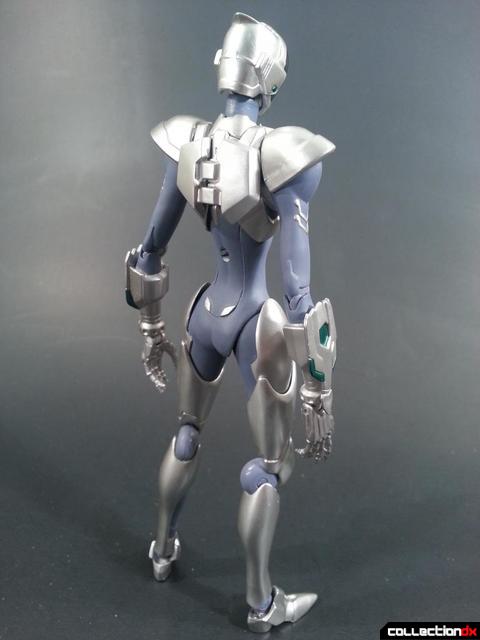 The silver paint is vibrant and the clear green dome across his face contains a great level of depth without appearing to be hollow. 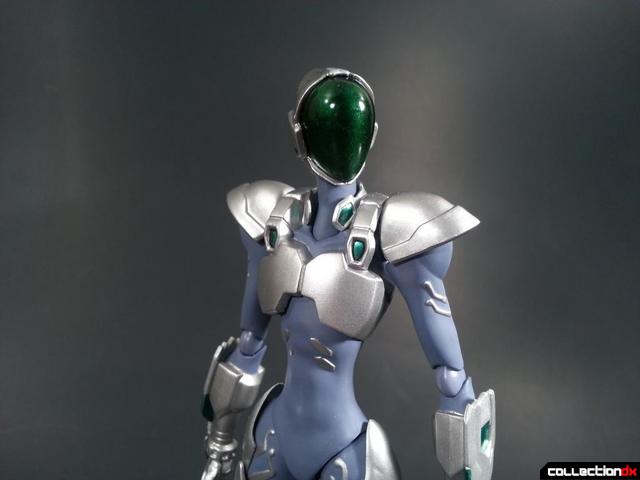 I love how skeletal and sickly Silver Crow's hands look. 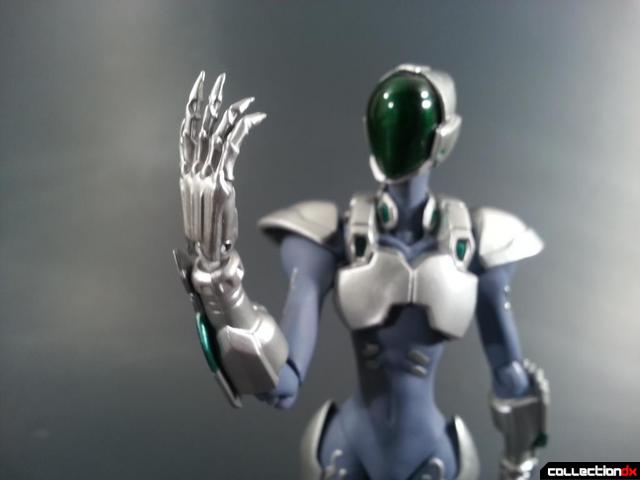 Silver Crow has the standard figma joint placement in his articulation. Like most male figma, he also makes use of the larger figma joints in his knees that give him a smooth and wide range of motion. I also really like how the shoulder pads are designed. They are actually on a small rubber ring that allows the piece to rotate and move independently of both the arm and the torso. 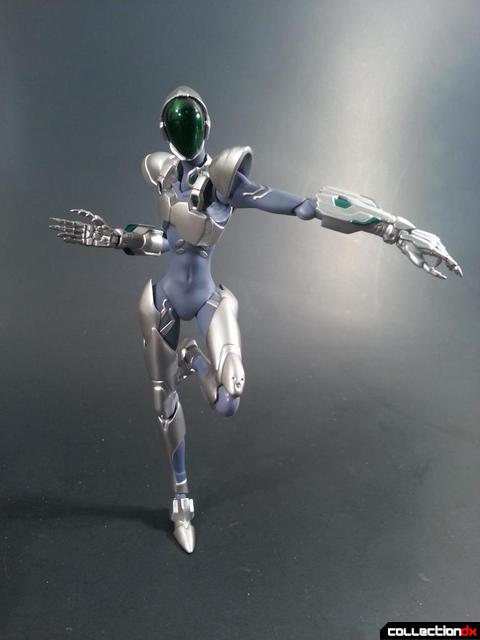 The articulation makes it very easy to pose Silver Crow as if he's getting ready to brawl, and also inevitably getting beaten to a pulp! 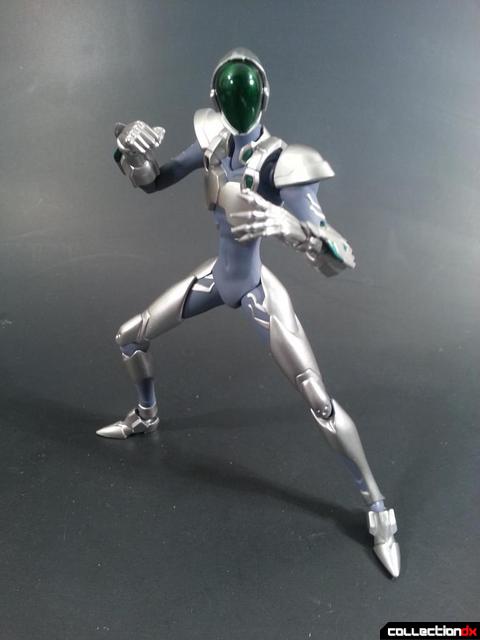 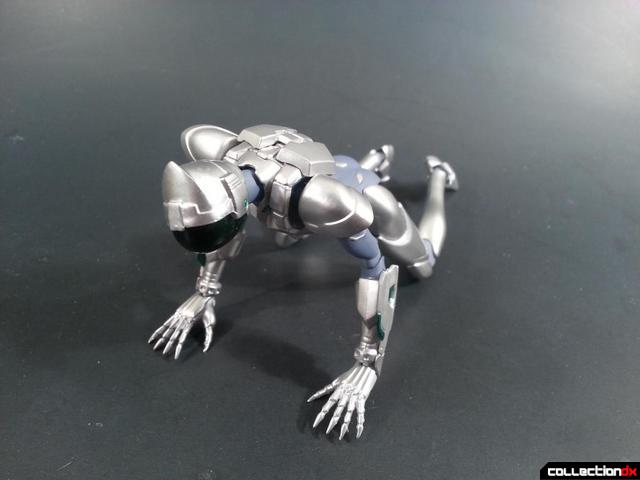 Silver Crow is pretty loaded with accessories and display options, including alternate hands and arms effect parts, and wings. 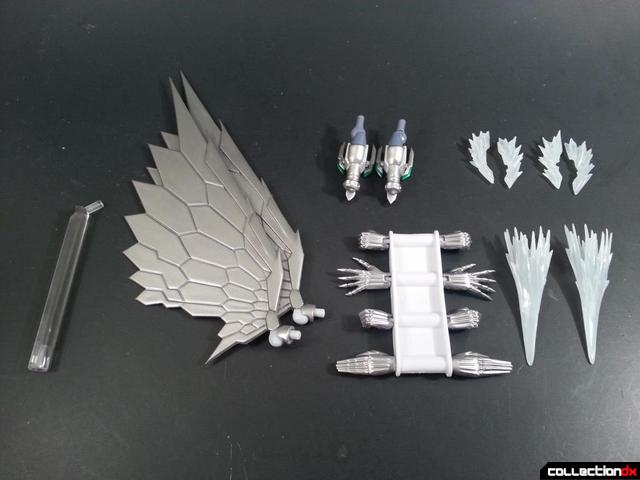 The alternate arms feature an open version of the bracer on his arm and are used to emulate his special attack Laser Sword. 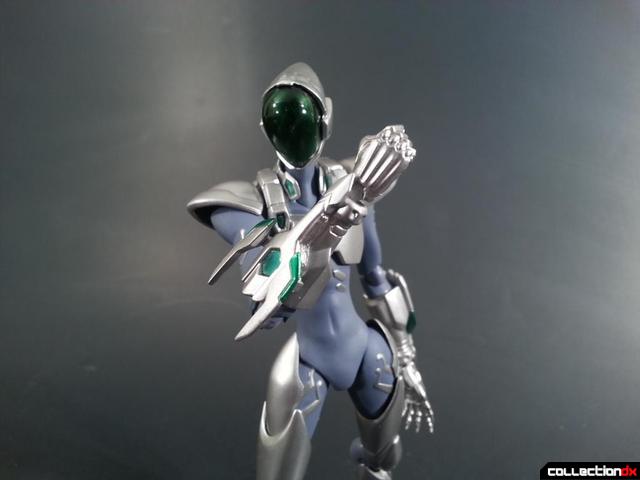 Two of the effect parts are attached to either end of the anchor and make it look like energy is rippling out of the bracer. The clear smokey plastic really sells this. 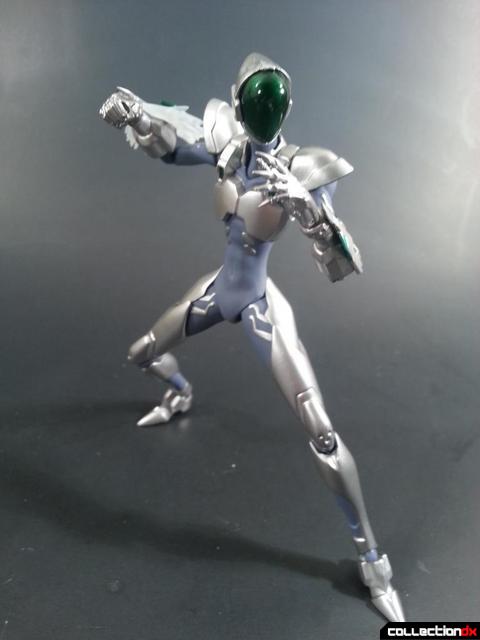 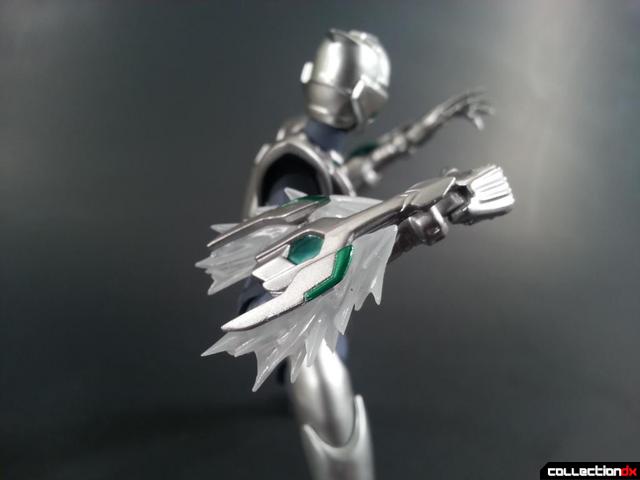 With the help of his pair of karate chopping hands, you can place the other effect part over his hand and now Silver Crow is ready to stab and slash other Duel Avatars. 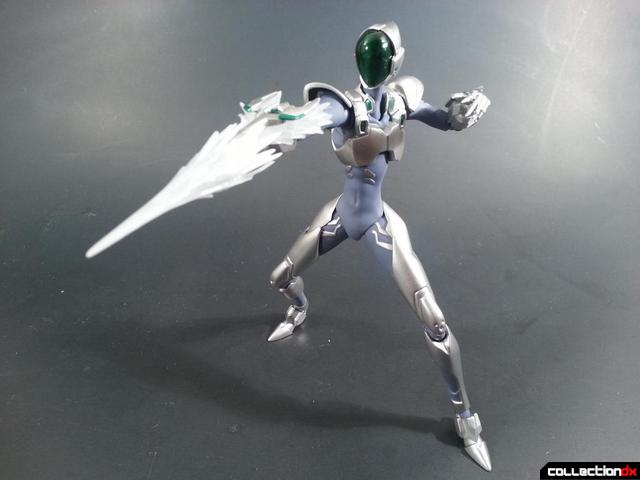 Of course, Silver Crow's special attack is not one what makes him special. He is the first Duel Avatar in Brain Burst who was the ability to fly, and the toy is no exception to this. Putting his wings on is a breeze. Just remove the plate on his back and peg the two wings into the holes. Since they're on figma joints, it's very easy to pose them. Unfortunately the wings are also a bit heavy for the small joints, so posing the wings can take a bit of time. 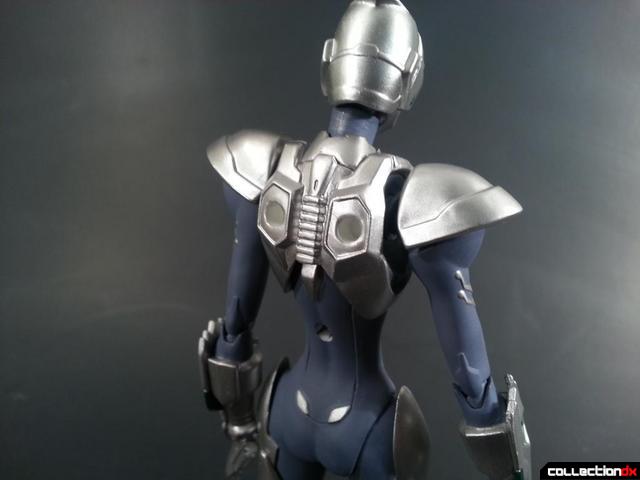 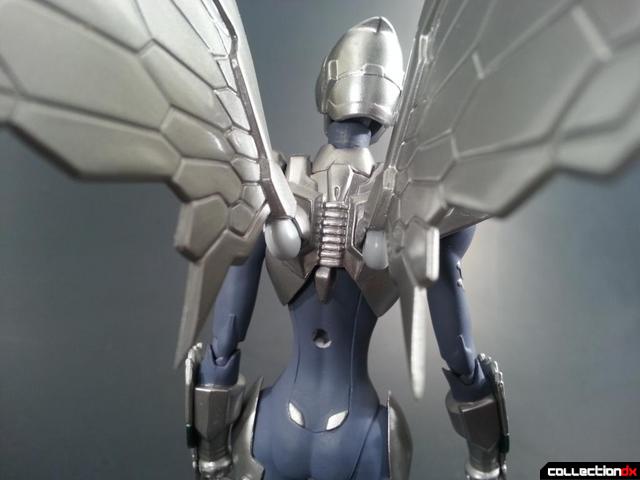 Silver Crow's wings are large, geometrical, and one heck of a space hog. It's a bit hard to get him to pose standing with the wings, but that's okay since you really need to pose this guy flying if he has his wings on! 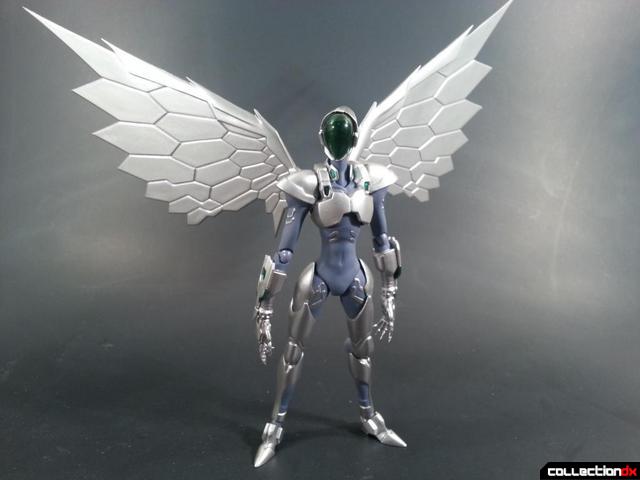 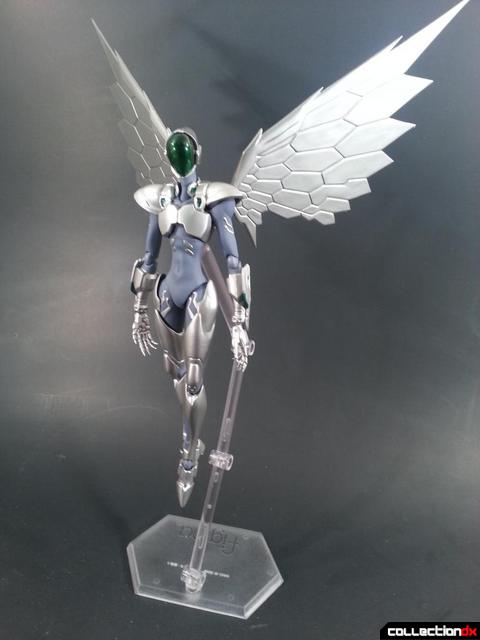 There's something truly elegant about this design. The slender form, and subtle yet vibrant color scheme really makes him quite a shining little piece. 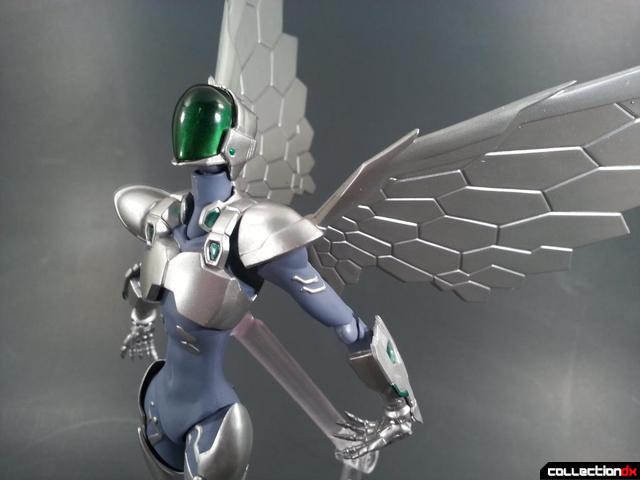 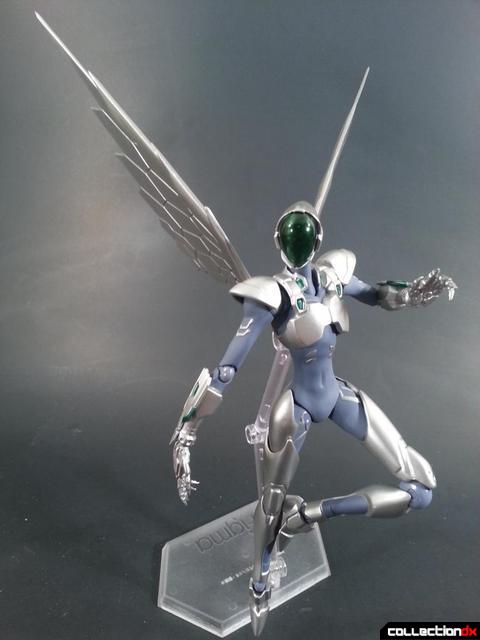 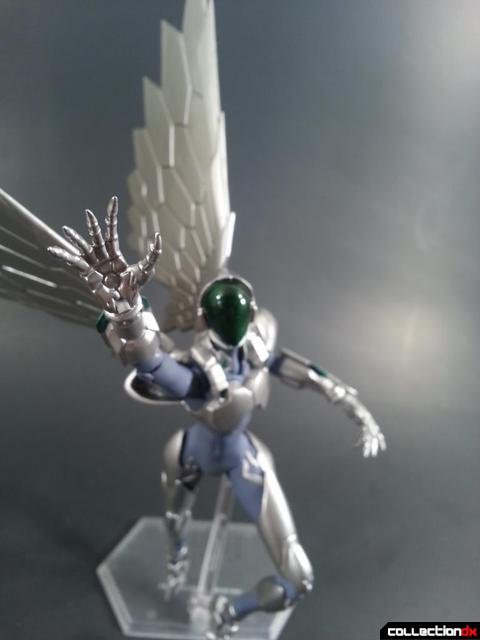 Here he is next to his queen, Black Lotus. Silver Crow looks like he might be a little short to be in scale, but he still looks good. They really do make quite a striking pair since their designs clash as much as they do. Still, I think they make a good couple. 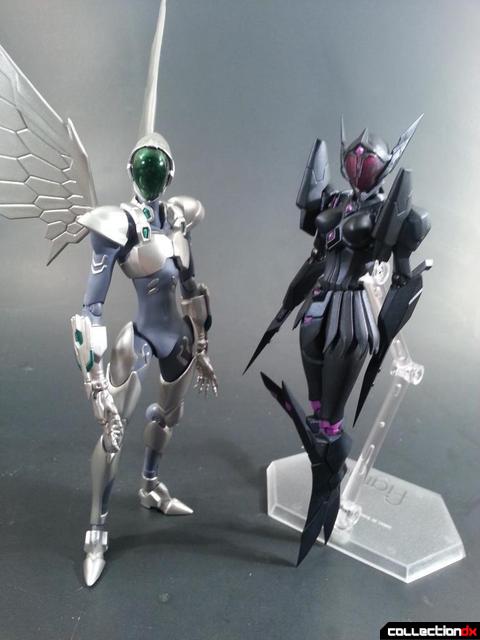 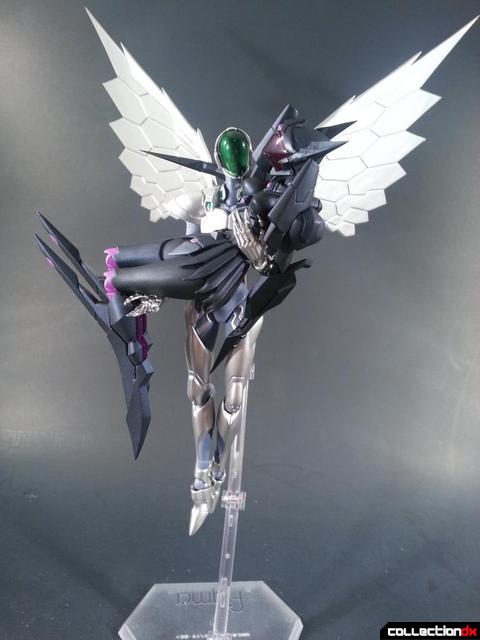 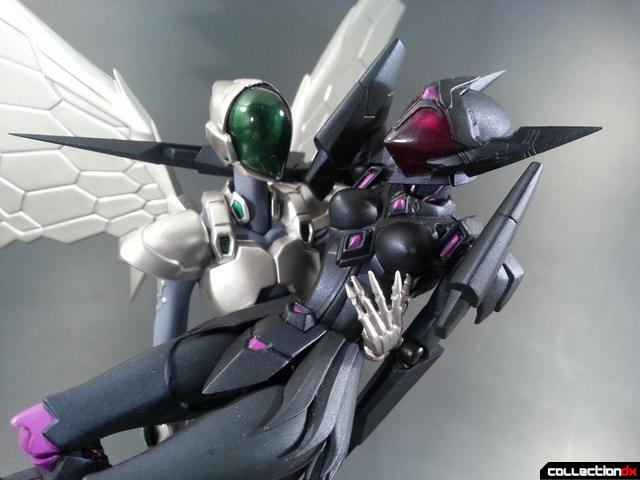 Figma Silver Crow came out in one of those time periods where two companies were releasing different versions of the same character. In this case it was between the figma and SH Figuarts version of the toy. Between the two, I think the SH Figuart is the better toy since it has more articulation, and a little bit of diecast as well. The figma version though, is the more screen accurate toy while the SH Figuart takes more liberties with Silver Crow's design and proportion. Regardless of which version of this toy you choose, you will have an awesome winged Duel Avatar who's just chasin' the world. 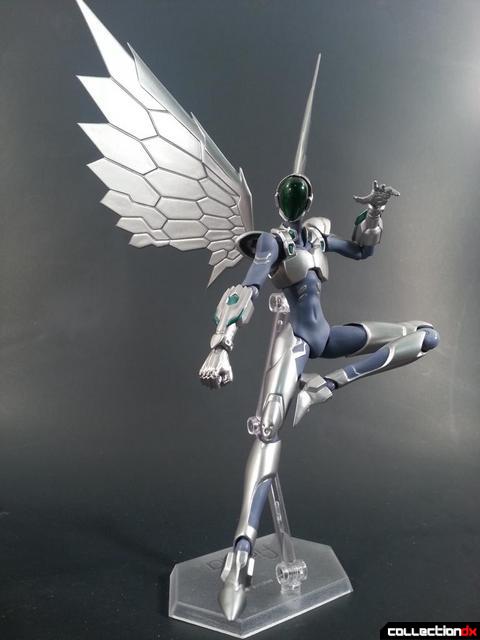 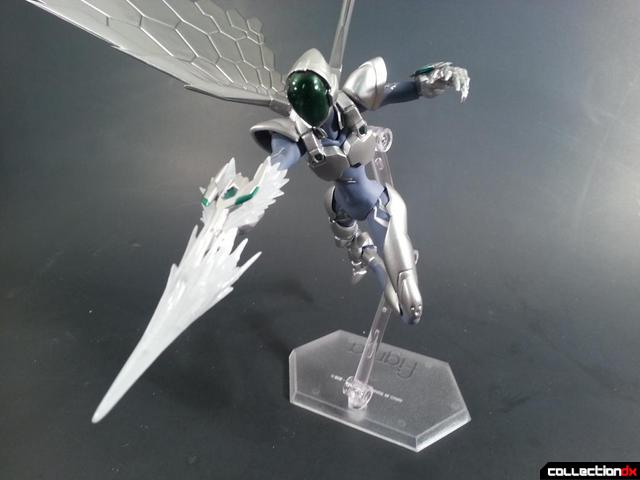 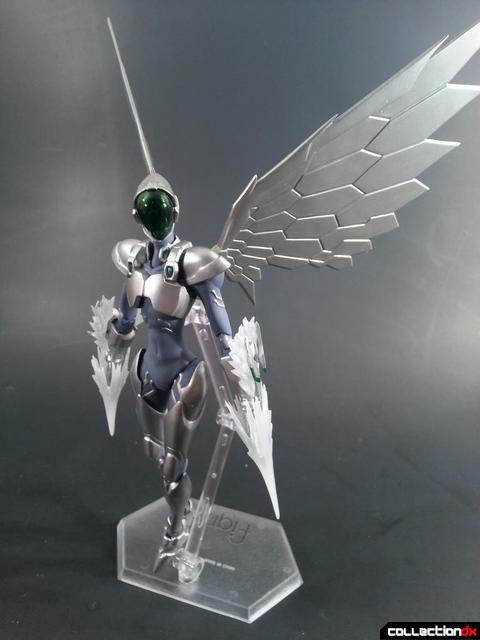 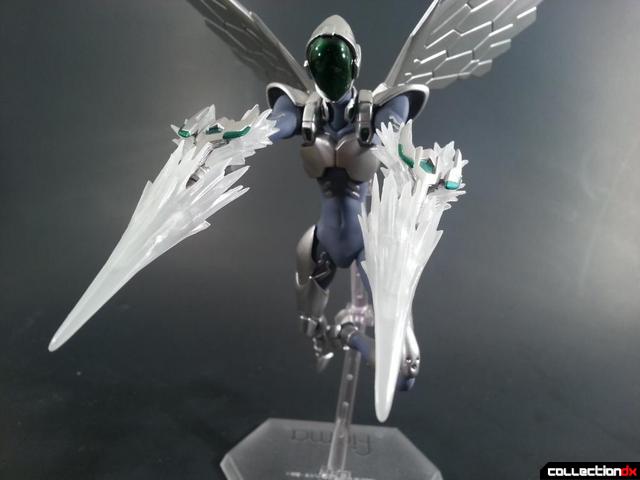 CollectionDX, the website adults go to play Barbie with robots.

Seriously, though, Silver Crow does seem like a good figure. The skeleton hands really give a menacing edge to what would otherwise be a "soft" design.