Many of our readers know that I have been a Saint Seiya fan for some time and have really enjoyed the smaller Saint Cloth Myth line, so when I was told Bandai would be doing 1:6th scale figures I was pretty excited. All that shiny, metal goodness in twelve inch size? Count me in.

If you’re going to do a twelve inch tall Cloth from Saint Seiya, Sagittarius is a good choice, as it is probably one of (if not THE) most important of all the Cloths in the series. 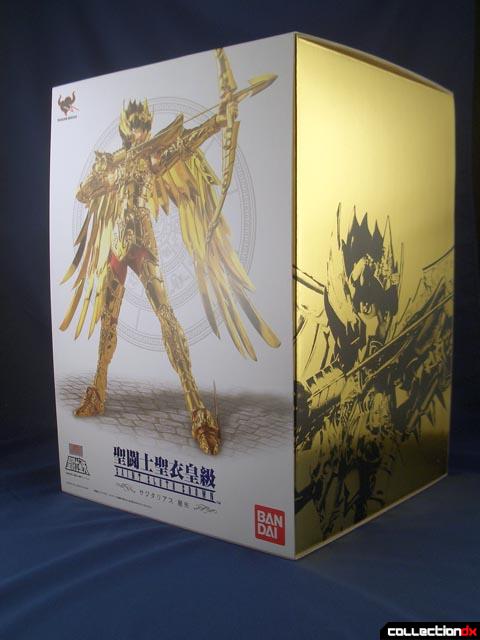 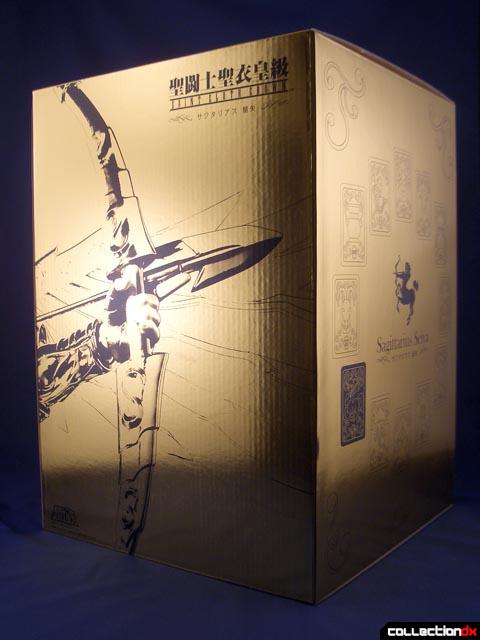 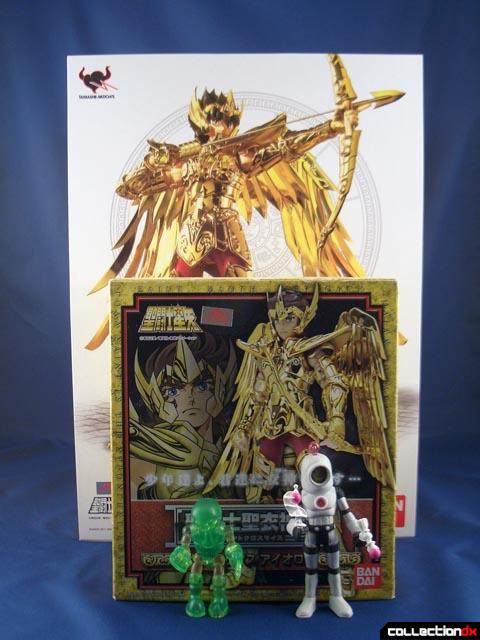 Inside the large box are four different boxed trays. 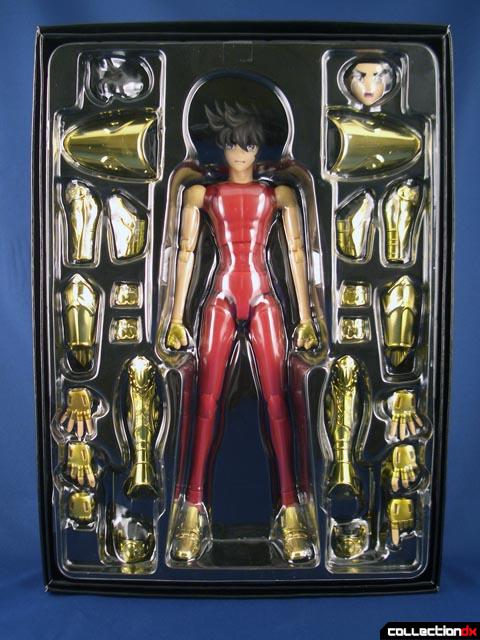 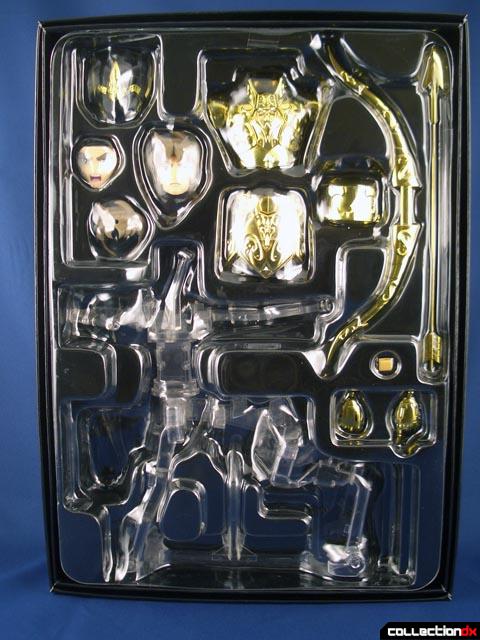 In those boxed trays are all the parts and pieces packed in vacuum formed trays. Nothing really fancy. It’s basic and utilitarian. 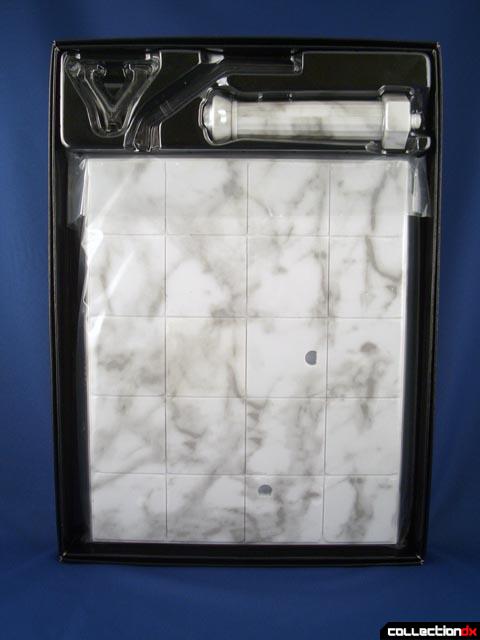 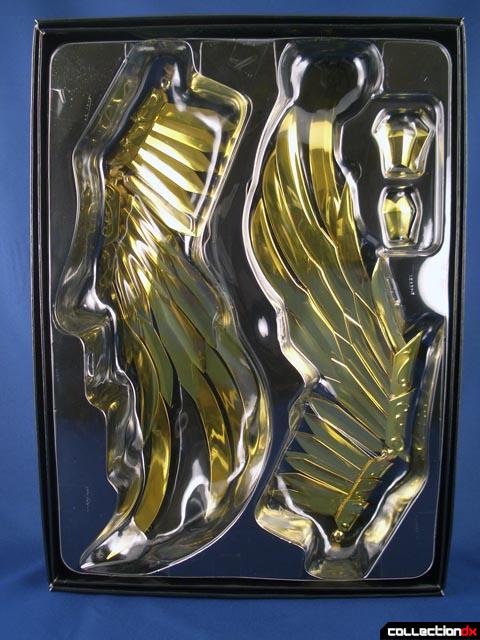 Unpacking the items, the first thing I notice is the cloth pieces are mostly plastic. Most Saint Cloth Myth releases usually contain a lot of metal in the armor. Not so much here in the bigger Saint Cloth Crown. Diecast is limited to the shoulder plates, front and back waist plates, and the feet. The rest is all plastic. 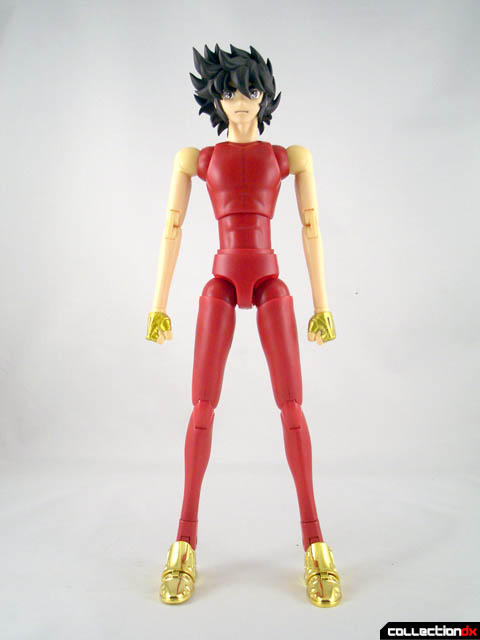 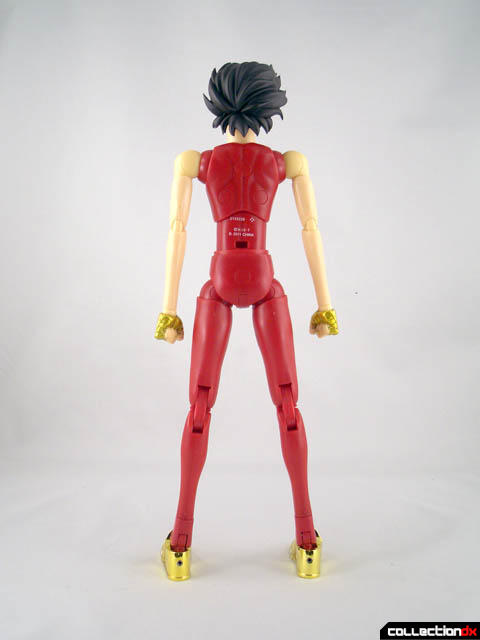 The figure is essentially a sized-up Saint Cloth Myth figure with all of the articulation collectors have come to expect from the smaller Saint Cloth Myth line. No surprises here, fit and finish are very good, and all the limbs and joints are nice and tight. 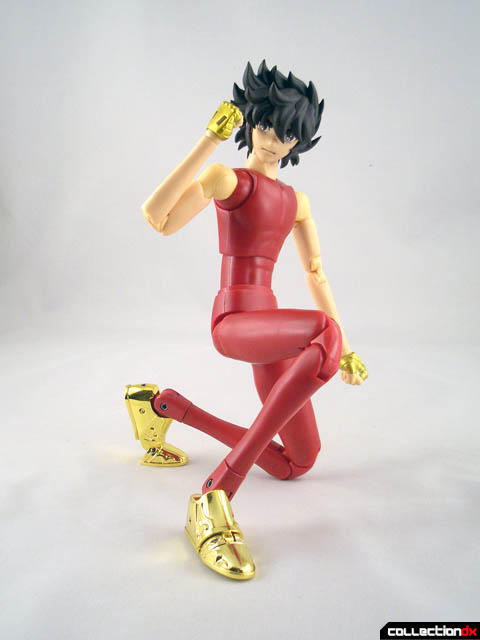 When the Saints are not wearing their Cloths the armor forms an object/statue of the constellation the armor is designed after. 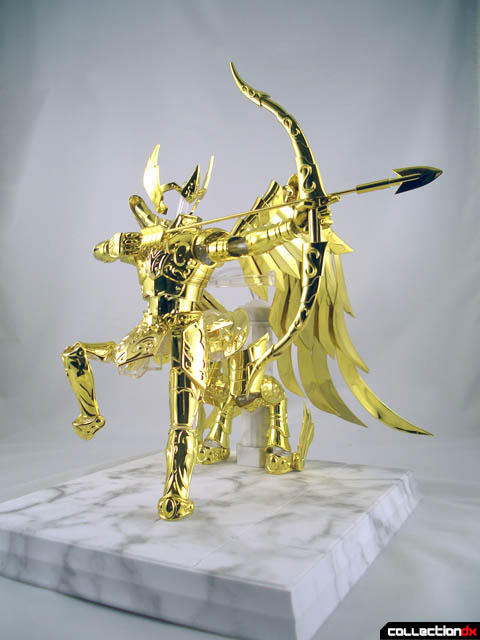 A base and clear frame are provided to attach the armor bits to create a stunning (and shiny) display. The clear frame helps hold it firmly to the base, so there is no fear of this taking a header off the shelf (the fate of my smaller SCM). 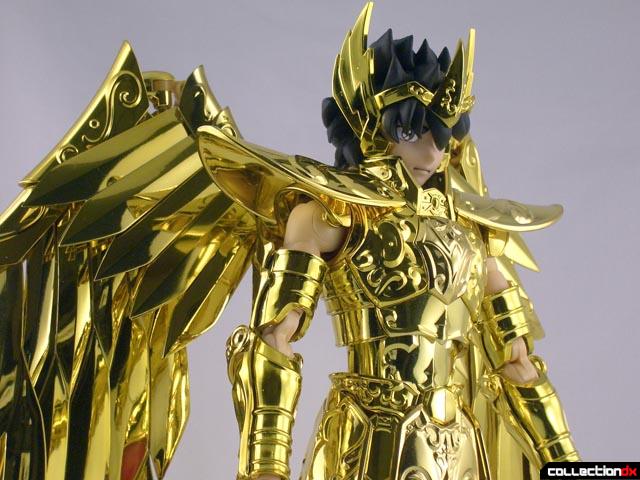 The cloth goes on in a manner very similar to the smaller Saint Cloth Myth version, with the exception of the legs. Instead of solid round parts you slide over the leg, these are made of multiple pieces to be assembled around the leg. While this looks great, it severely limits the posability in the legs, not giving you much room to bend the leg at the knee. Despite that it is still a very impressive looking figure. 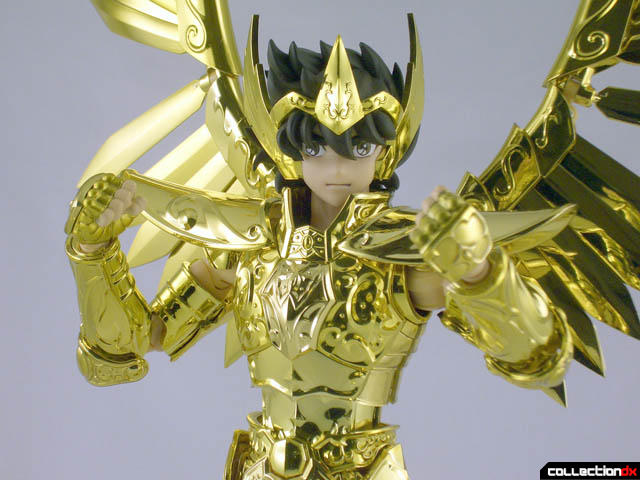 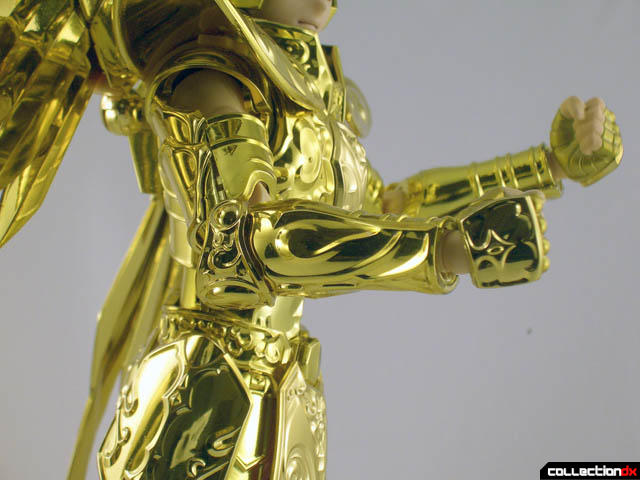 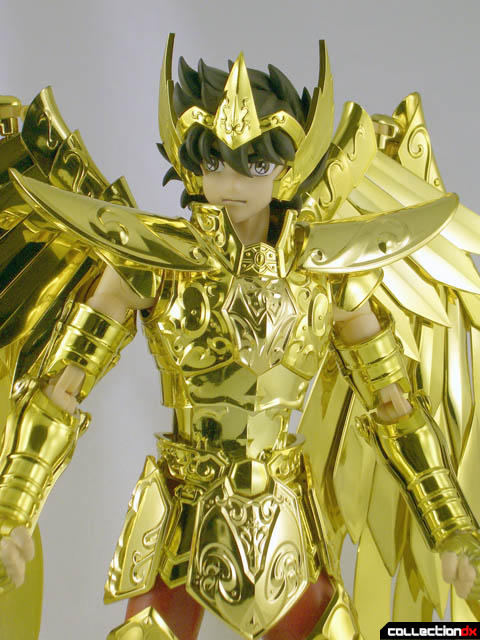 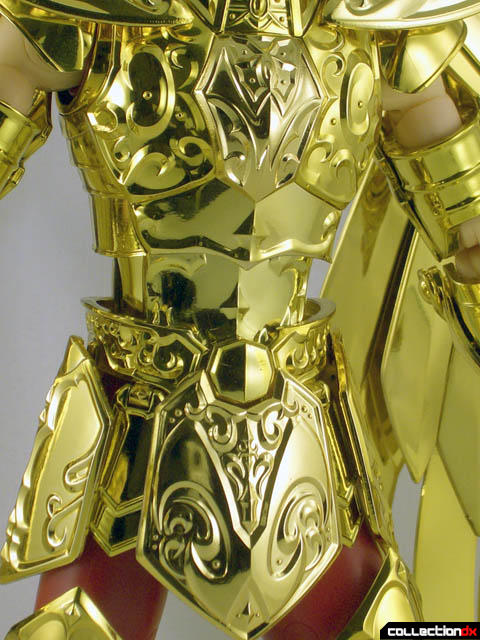 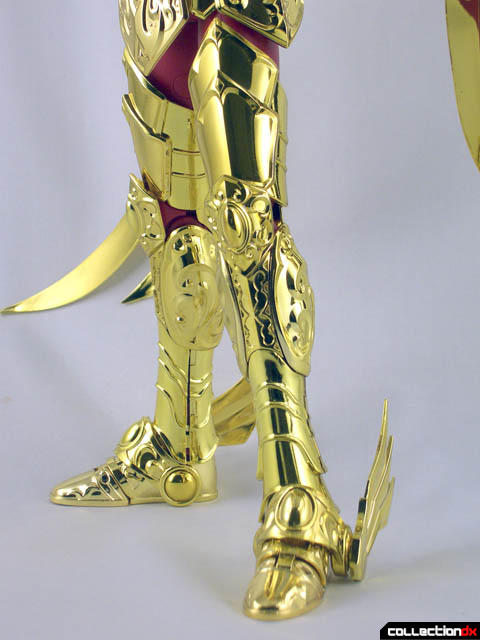 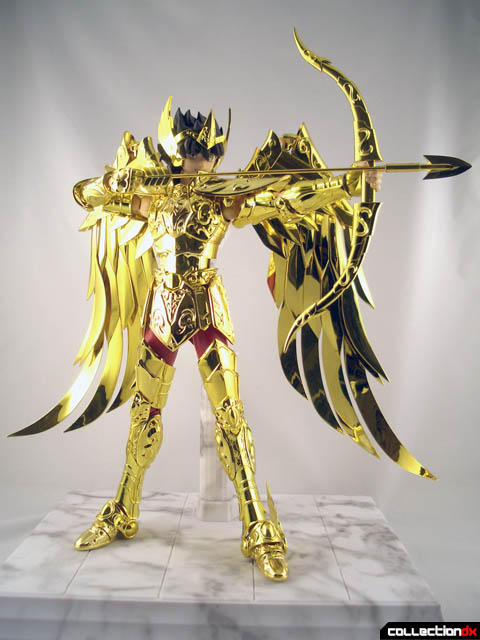 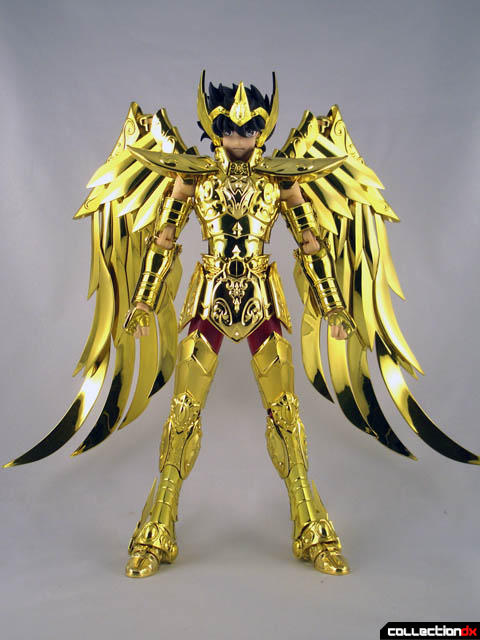 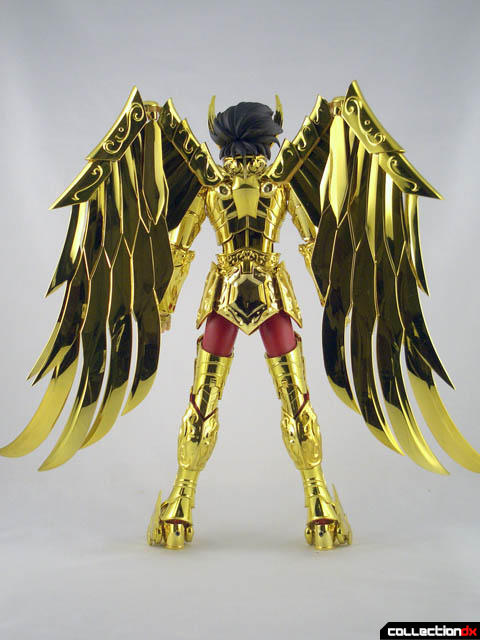 The wings are highly articulated with individual features being movable, giving you some dramatic wing span. 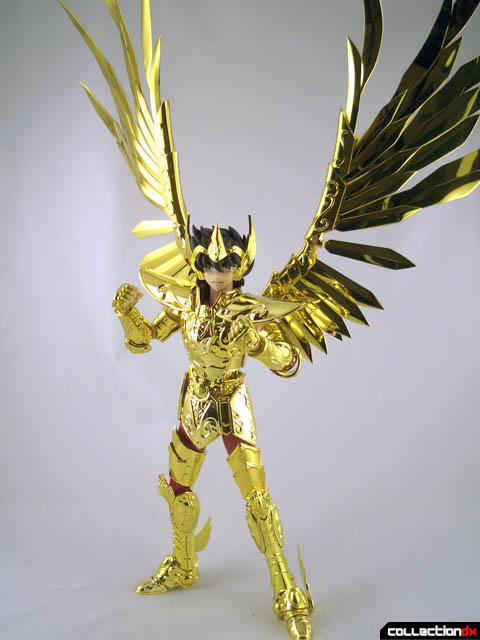 Not only does the set include the usual variety of posable hands and two Seiya heads, it also includes the Aiolos head so you can choose to display it as Sagitarius Aiolos. 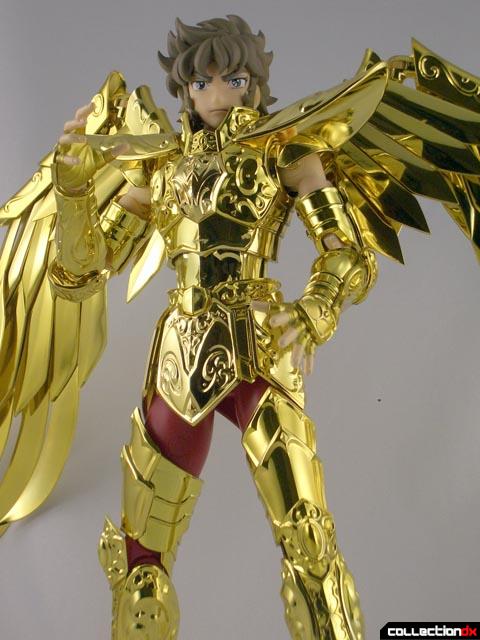 I like it, but I’ve been spoiled by the smaller SCM line and really was disappointed it didn't feature the level of metal I have come to expect from figures for this series. At four times the price and a third of the metal I will be passing on the rest of this series should it continue. 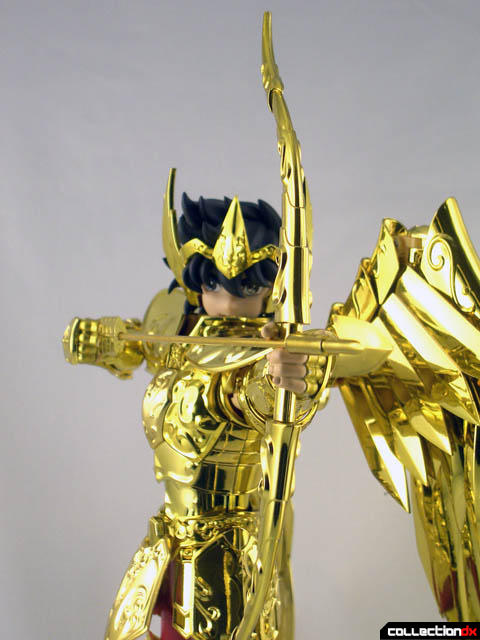 As a matter of fact I am pretty much done with Seiya unless Bandai deems us worthy of receiving an Athena Cloth, but at the rate they’re going with remakes, reissues, and redo’s in larger scales it may very well be another 10 years before we see that.

4 comments posted
It's a shame that even in a

It's a shame that even in a larger scale, they can't get a normal looking figure sculpt. I don't usually complain about the prices of Japanese toys, but you'd think for this much they could do more with this than just essentially scaling up what they already had.

Looks nice armored up though.

This is a beautiful large-scale version of the Sagittarius Cloth. When it was announced , I was pretty excited about it. Then I thought about it from a business perspective and I think Bandai really missed the mark with this release. As you mentioned their is a lack of diecast content , which is the signature part of the Saint Cloth Myth line, that goes all the way back to the vintage toys from the 80's. Second, I think it is harder to get people excited about a character that has been released who knows how many times ( many of which I am guilty of buying).

That being said, I will probably pick one up eventually, when I find a good deal on it. Most of the retailers seem to have an abundant stock of the Crown Seiya, so I can play the waiting game with this one.

Also, when Bandai unveiled Shaina, there was mention that the new female saint body would be used for Shaina, Marin, Mermaid Thetis and the Athena God Cloth. Seeing as how we have seen two of the four, I am hoping that Athena in her God Cloth is not too far behind. Though I think we will see Thetis first, since her armor is much simpler.