This character needs very little introduction, if any. He is, of course, Woody from the Toy Story movies.
Woody comes in a nice box. 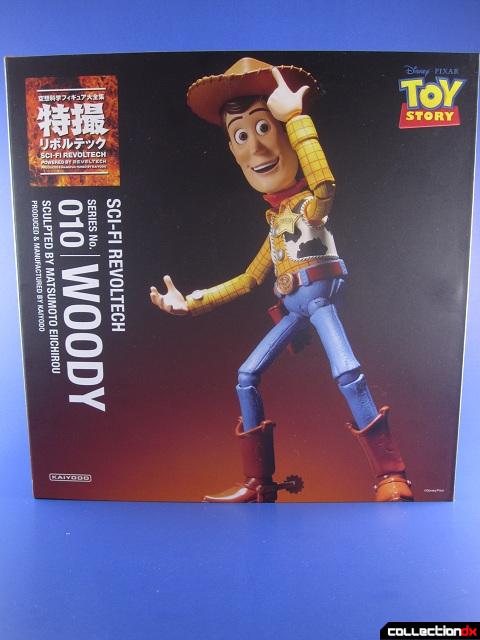 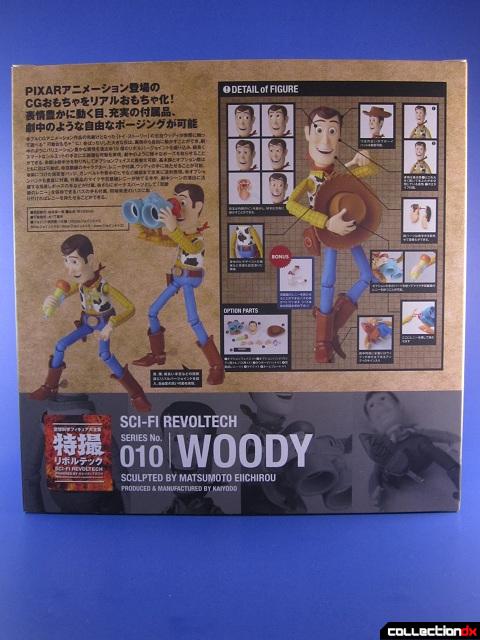 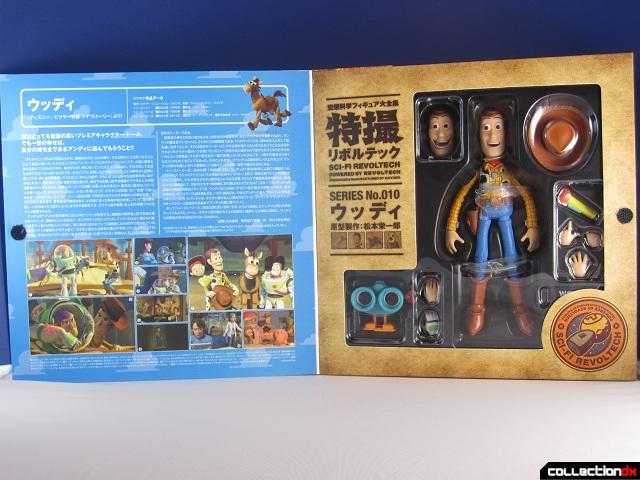 The front of the box is a flap that opens, revealing the plastic tray containing Woody. 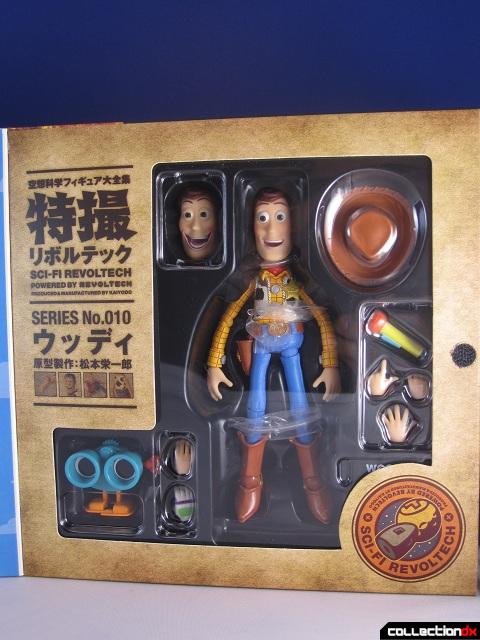 I liked the finish of the right inside panel of the box, as it invokes the look of those old-timey wild west wanted posters.  The left panel contains some shots from the Toy Story movies and, I am guessing, information about the movies. 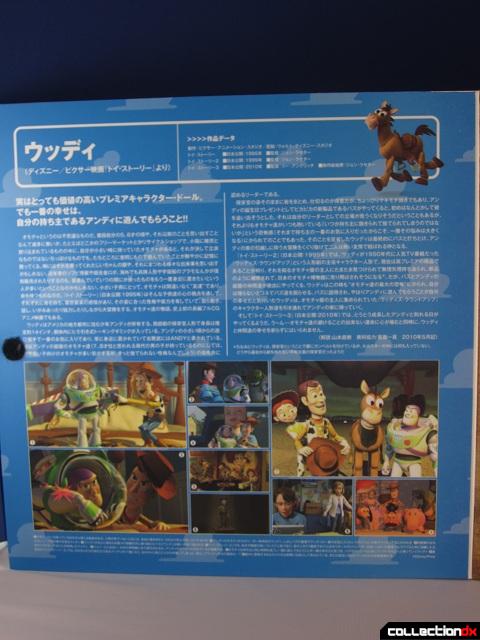 Woody came packed in a black plastic tray with some of those annoying little twist ties.  Luckily, Kaiyodo padded the twist ties with plastic to prevent Woody from losing any of his paint. 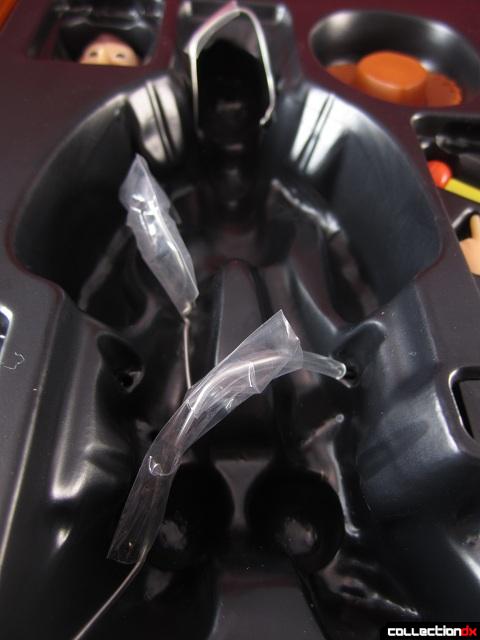 They also put a small sheet of plastic between the top and bottom halves of his waist and the belt to prevent paint trading between these parts. 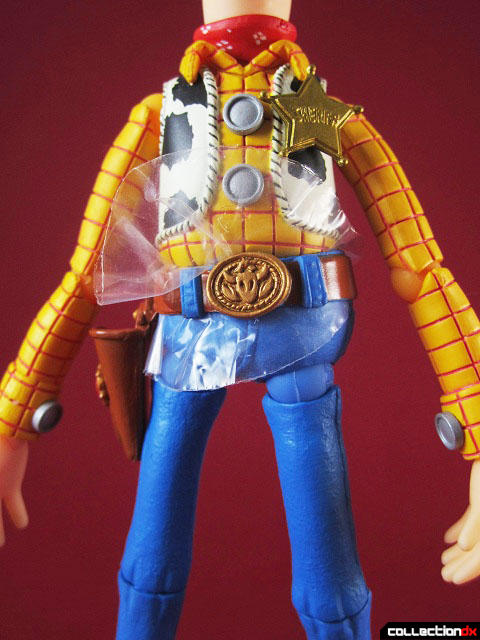 Kaiyodo did a great job at blending their signature Revoltech joints into the figure, providing a clean looking Woody. 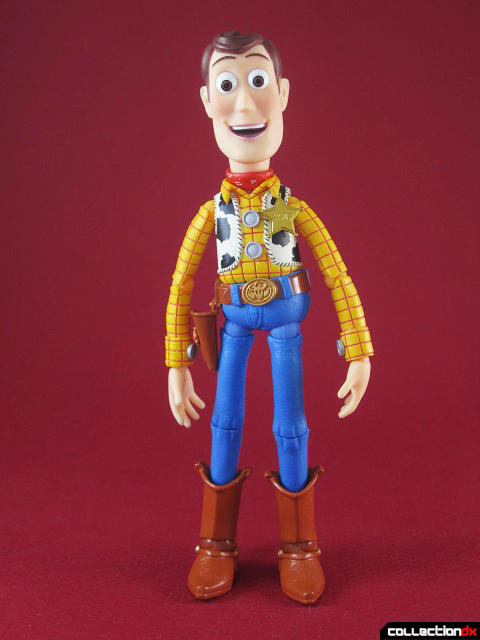 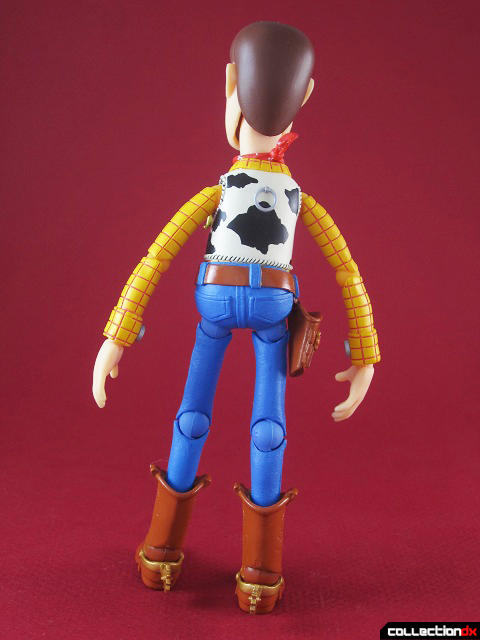 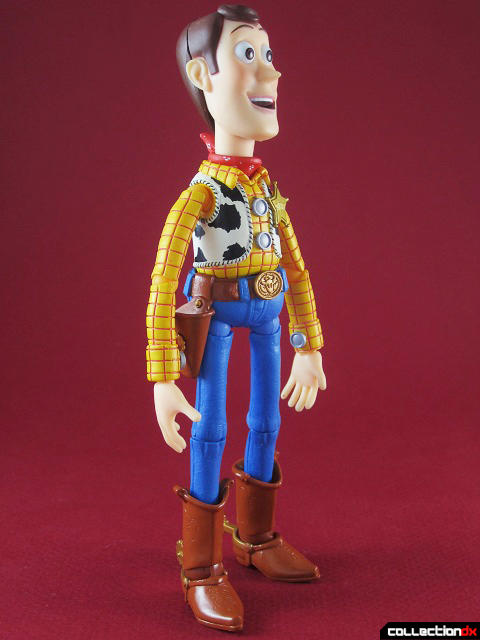 This toy also does a good job at captures the essences of Woody down to the smallest details. 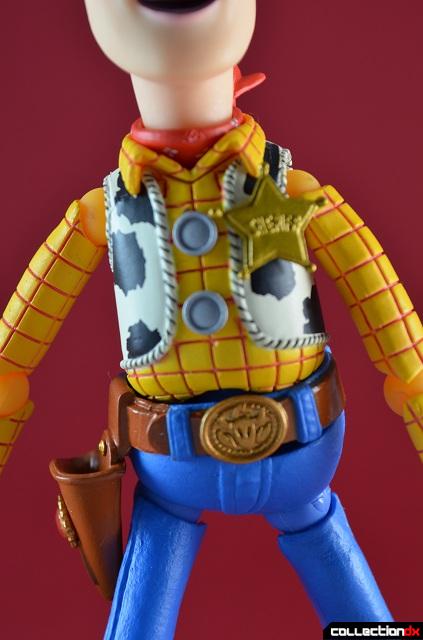 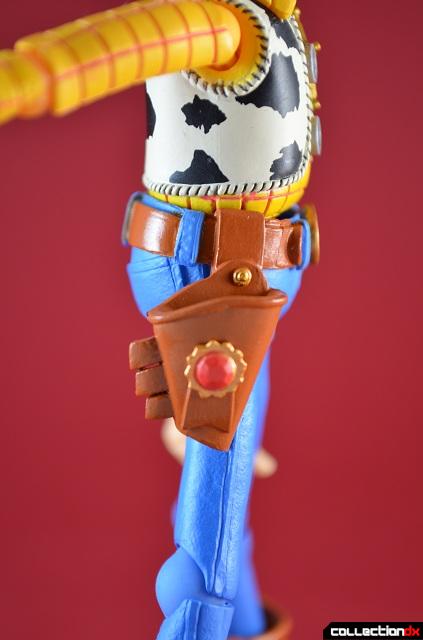 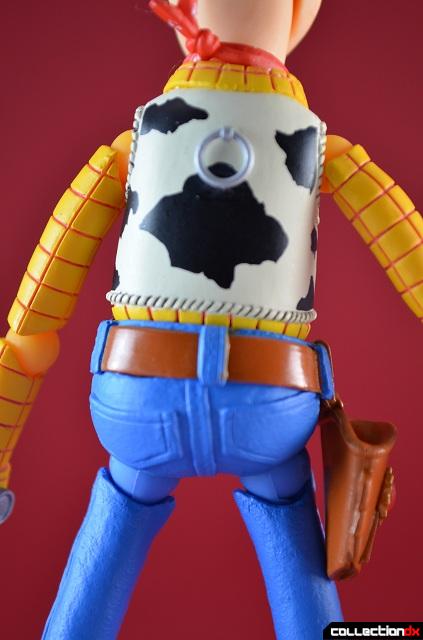 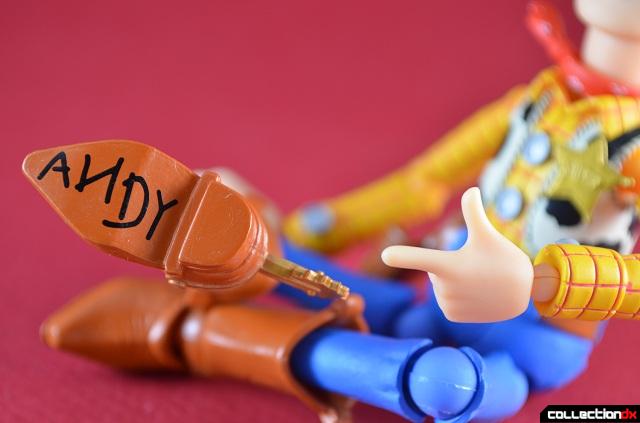 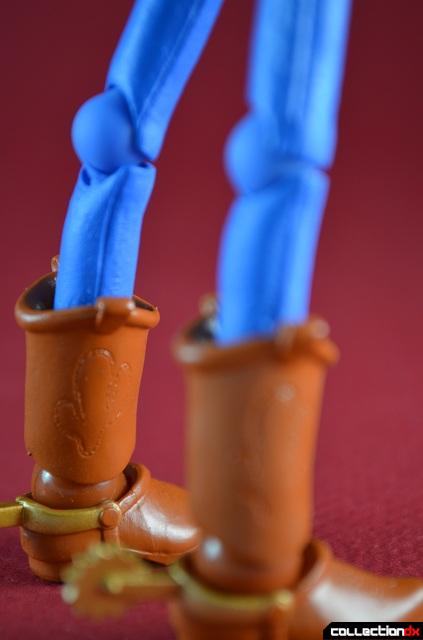 These cleverly concealed Revoltech joints allow a great range of articulation. Unfortunately, this is hindered by some stability issues. First, the two contact surfaces of his boots make achieving an even contact with the surface he is standing on a little challenging. The second challenge to standing Woody is the placement of the legs on the toy, which are at the front of the body. 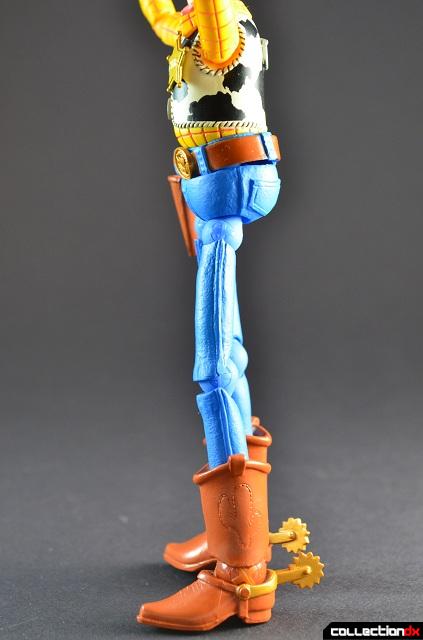 To use a Jeff Foxworthy simile, he looks like you made a frog stand up and put on a pair of double-knit pants! That makes keeping him upright even more challenging since the legs do not align with the figure's center of gravity.Unlike many of the other Revoltech releases, Woody does not come with a stand or base to help staiblize him.

Woody comes with a few accessories from the movies.

His hat and mic. 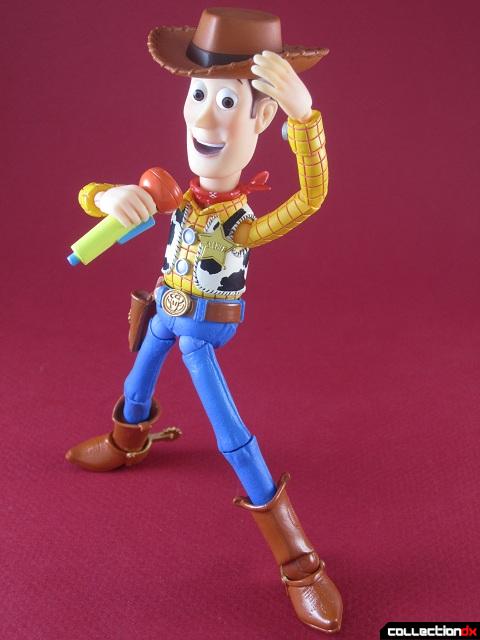 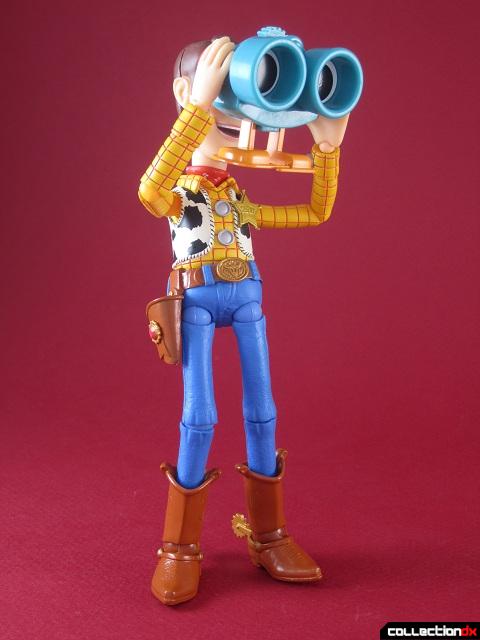 What could he be checking out?

One of the selling points for the Sci-fi Revoltech Woody is the eye system. 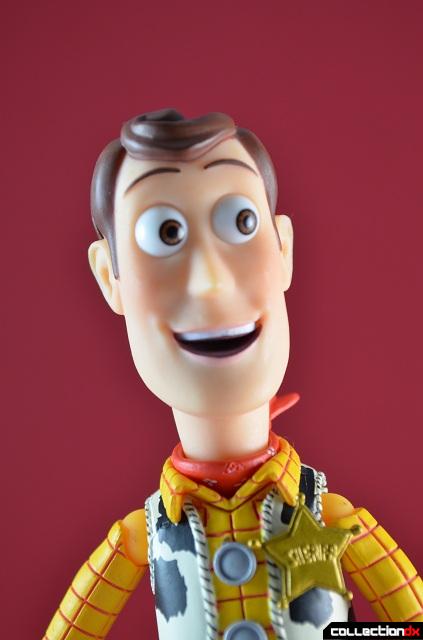 After removing the face, you can shift his eyes using two pegs on the inside of the front face piece. 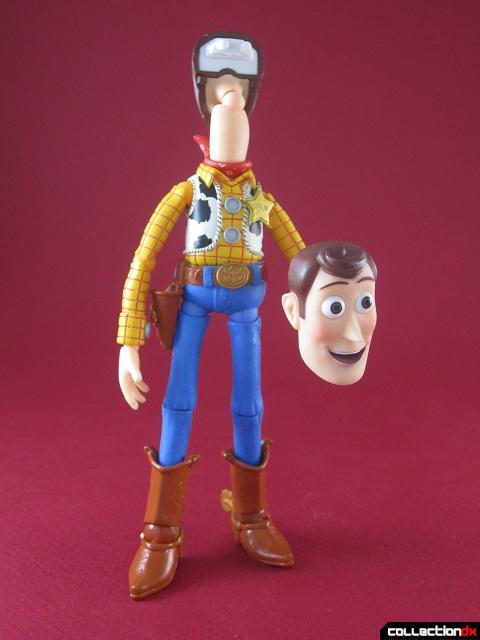 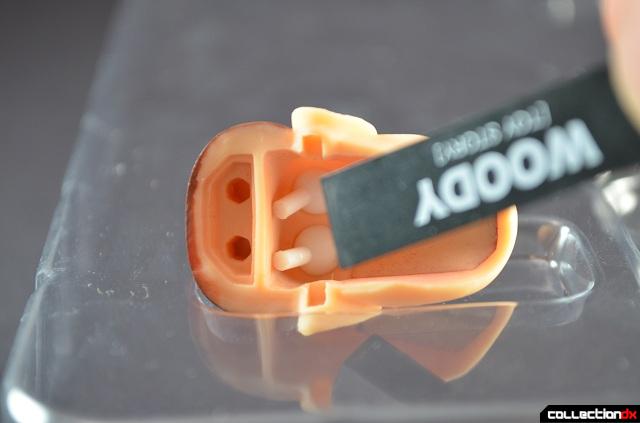 While a neat addition to the figure, I often found myself fighting with the pegs so that I could get the eyes into the right position. The movement of the eyes is not as fluid as you would expect for two sphere shaped objects. They stuck at certain points, for whatever reason, making me apply more pressure to the peg. This usually resulted in pushing the peg all the way to edge, which was not where I intended it to end up. I had to use that little black tool that they included with the figure to get the peg unstuck from the corner.

The real selling point for the Sci-fi Revoltech Woody was the innocent inclusion of the “laughing” face. 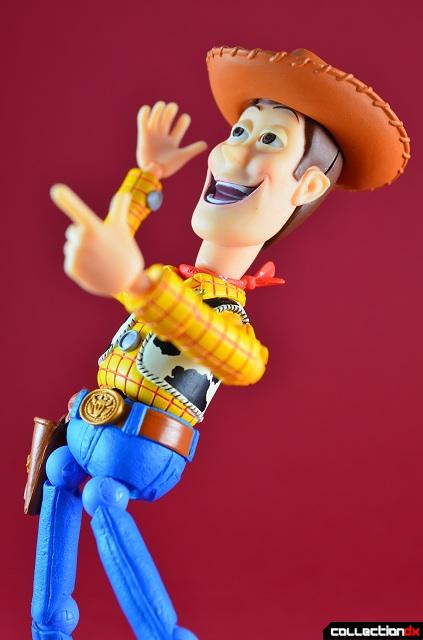 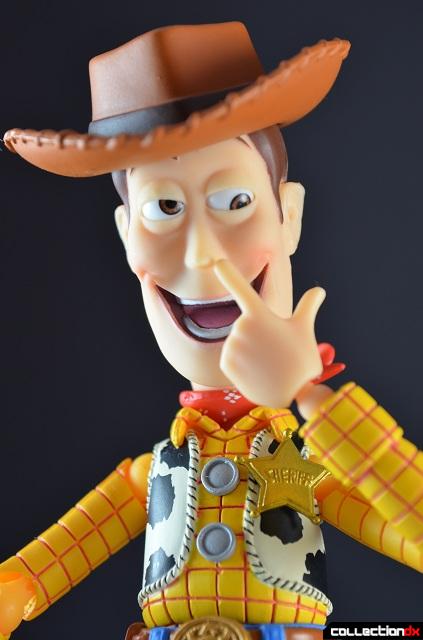 So that's what he was checking out earlier! 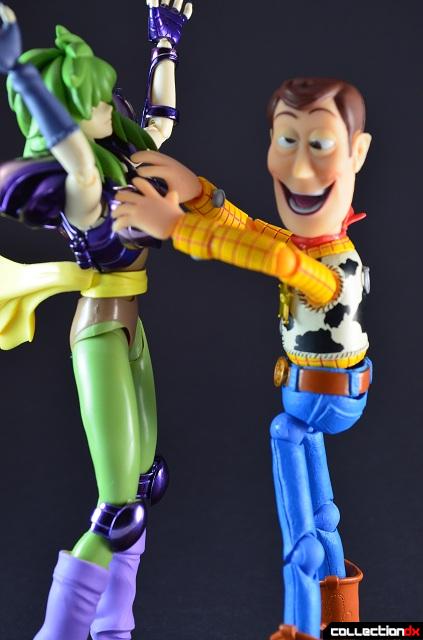 Suddenly Woody realizes what he can do with that Buzz Lightyear hand that he came packaged with. He is going to call it : "The Ultimate Stranger". 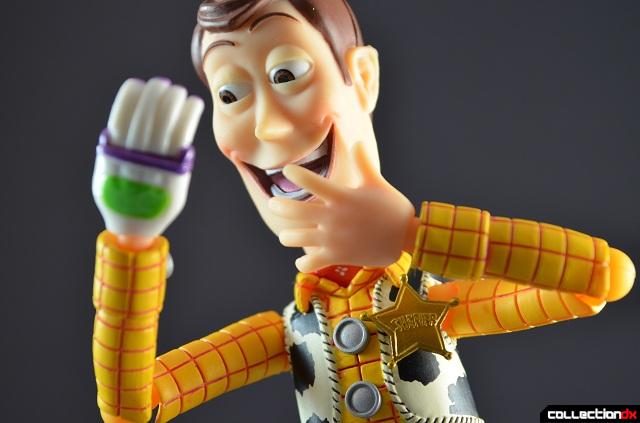 Can nobody stop Woody's reign of debauchary?
Anybody?!
Luckily there is one honest arm of the law 'round these here parts: Dekaranger Robo!
Restoring the peace, and the color to the backdrop: Dekaranger Robo! 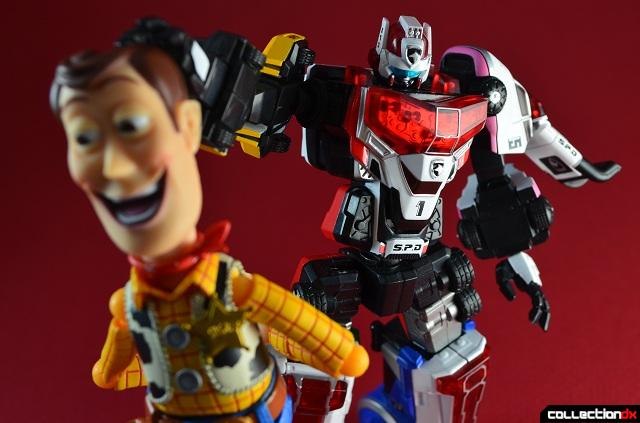 To be honest I wanted this figure because the meme made me laught a lot. I almost convinced myself to buy it at secondary market prices, which is about double retail.  Although it is great toy, I am glad that I managed to snag one for retail price on eBay. Kaiyodo is going to re-release the Sci-fi Revoltech Woody, but the laughing face will be replaced with another for that release. So in the end, it all comes down to how much you want to pay for the hilarious face of the first release.

10 comments posted
"You got a friend in

That's what she said!

My bad, I had not considered posting it there. Let me know if I should migrate it over to OtakuCDX.

Since I'm five, I found the Pervert Woody meme hilarious when I first found out about it. And for that same reason, I giggled every time this review used the word "Woody."

ULTIMATE STRANGER!!!!!! Hilarious! You are truly twisted much like the whole eye gimmick on Woody here. It does look very difficult to adjust (and it is a little creepy when you pull his face off). I hope no one at Disney sees this review.

Ligerbomb- Thanks for the compliment. I have a feeling that Disney knows how these figures are being used, which is why the re-issue does not include the "laughing" face. So I doubt, and hope, they will take notice of this review.

A little bit of both. The perfect stranger will haunt my dreams.

Long live Pervert Woody! The ultimate Buzz light year stranger would make an epic sequel to Toy Story! I am loving this review!

THAT'S NOT EVEN HIS FINAL FORM!!!