Being green is the easy part.

For every leader in his customized machine, sporting its own sweet colors there's always a dozen or so guys milling about in standard-issue green. Whenever one sees a green mecha, the mind immediately conjures up images of the military and hard(er) science fiction. When Char Aznable headed off in his custom pink Zaku while flanked by a team of green Zakus, a lot of people identified more with the guys in green. The regular fellas who don't have the machismo for custom colors, but still get to pilot a freakin' Zaku! Valkyries from Macross are no different with their pretense of being airplanes first and robots second. As such, even the Devil would come with an army of mass-produced minions: the VF-27B.

Sadly, those ubiquitous grunts always had a difficulty finding love from buyers. Unless you were a totally cool and unique badguy like a Zaku or Stormtrooper, kids were hesitant to buy the cannon fodder. Which is why Bandai has decided to take all the guesswork out of figuring out who is going to buy a specific repaint by making sure you really want it.

Disclaimer:Please excuse the multitude of greens visible in the photos. Under normal lighting conditions the colors are quite even. However, this toy was carefully constructed out of just the right shades of plastic that will completely screw over a digital camera. 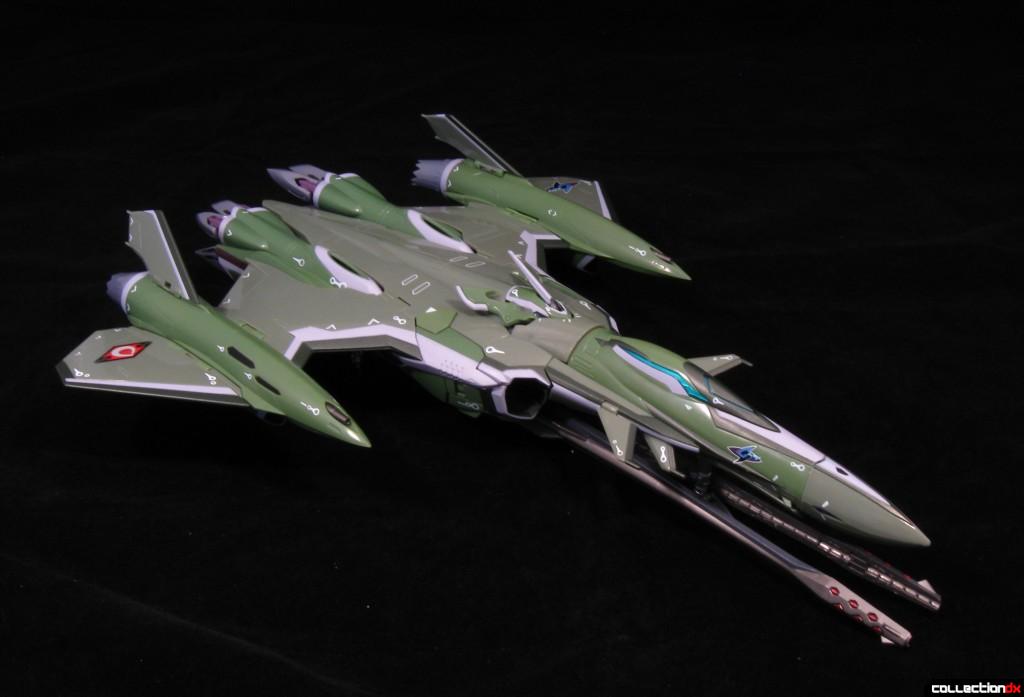 The VF-27 in fighter mode is a fantastic piece. Unlike the Brera Sterne type, which is an overtly anime-esque burgundy bird, the standard VF-27 sports a gorgeous green body. The colors add a real legitimacy to the design as this VF-27 can stand proud alongside its mass-produced brethren such as the Zaku and the Scopedog. 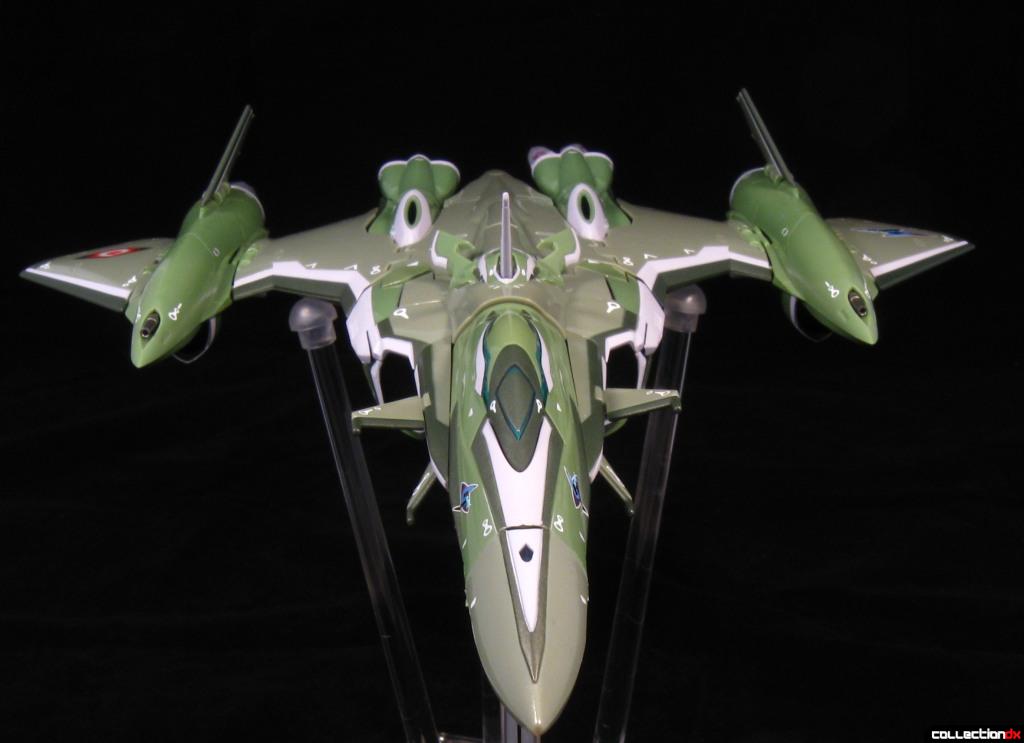 The green VF-27 looks appropriately sleek and menacing in this form and is utterly solid in its construction. The plastic parts feel just right and the diecast pieces used for major joints are near seamlessly integrated into the overall frame. 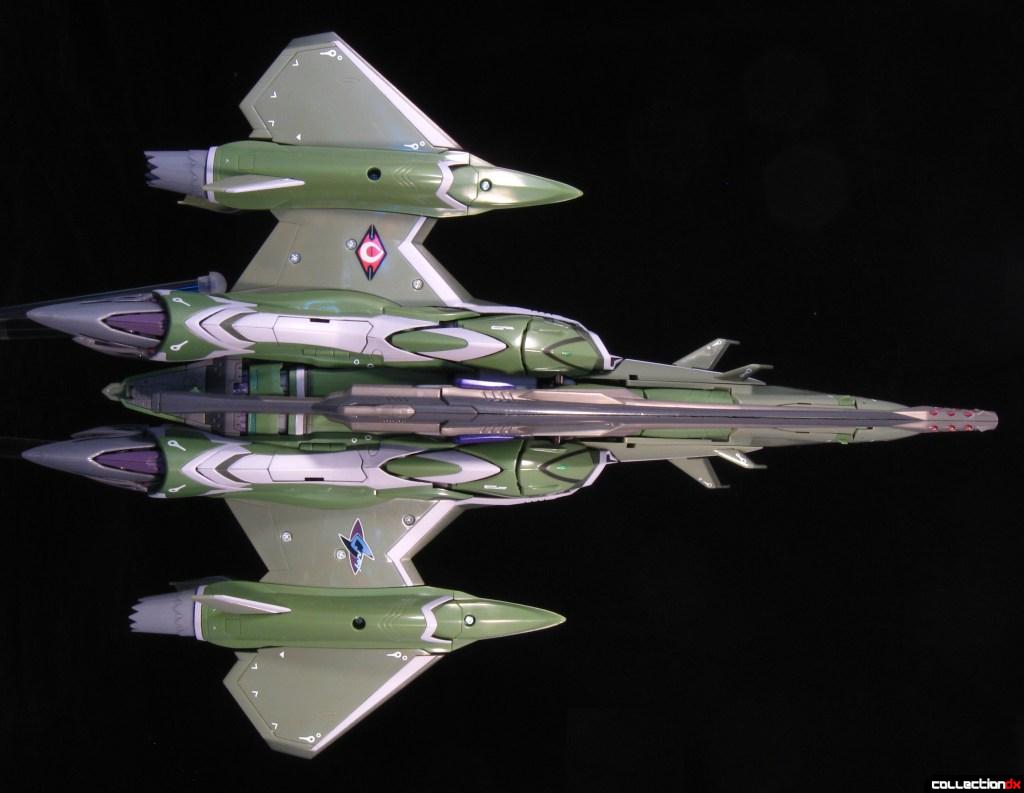 From below, the VF-27 shows its ancestry as an enemy Valkyrie. It's whole design conjures up images of its famous forebears such as the Sv-51, YF-21, and Fz-109. The massive beam gunpod latches firmly on a retractable plastic catch. 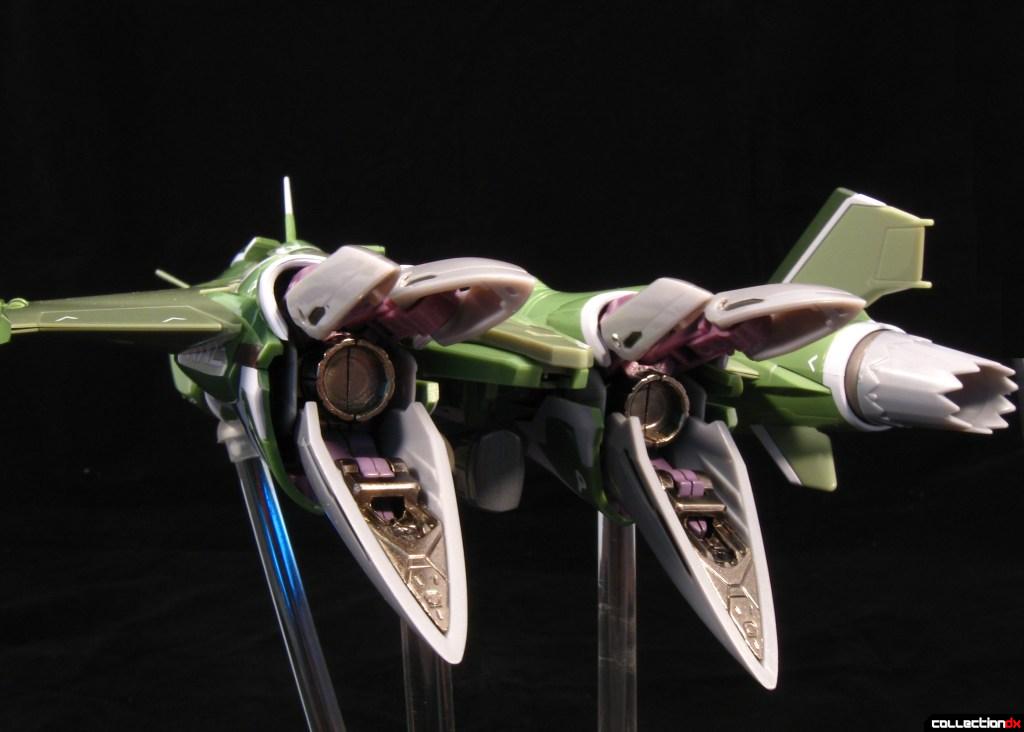 One of the figure's most notable uses of diecast is the highly detailed engine blocks. These parts form the Battroid mode's feet and feature some faux-nozzles and extra detailing around the ankles and soles. 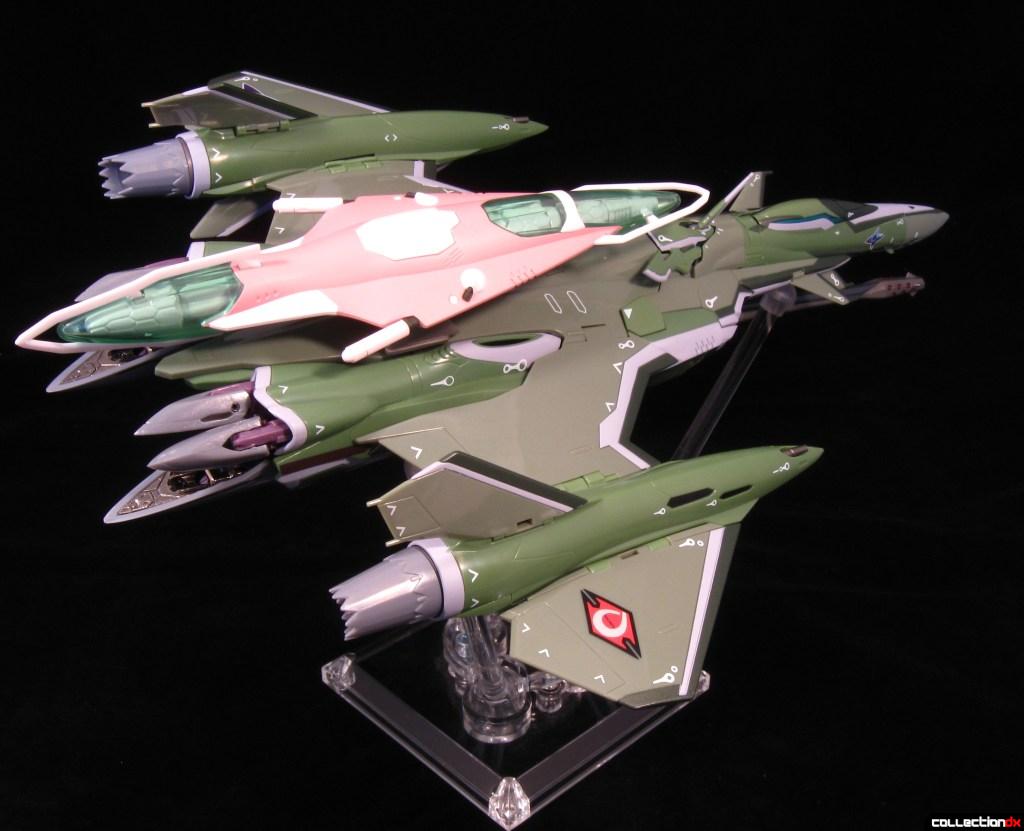 As a web exclusive, this toy also comes with an accessory from another web exclusive. This pink fold booster was originally sold in the Galia 4 Fold set, and was included with this toy. The previous version of the VF-27 came with only a mounting bracket. Here, Bandai was kind enough to include the booster and the two mounting brackets for the VF-25 toys as well. The whole affair simply clips into two small holes towards the rear of the plane.

And the darn thing still doesn't do anything. 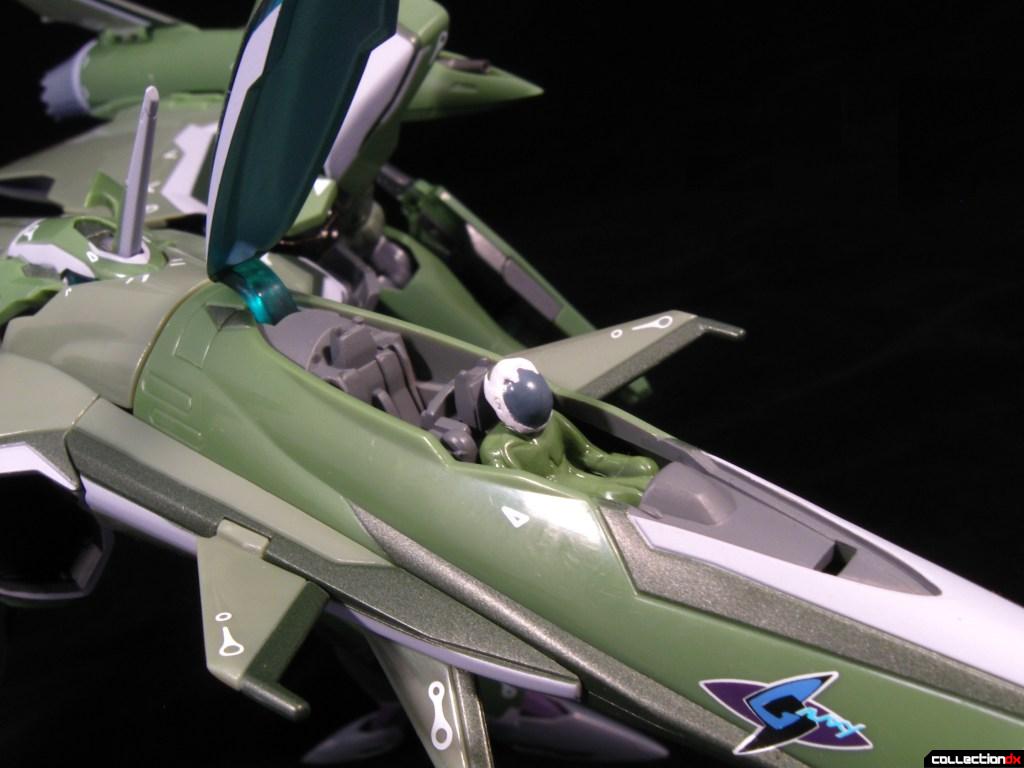 Another unique aspect of this release is the inclusion of a pilot figure in a green flight suit. Also included is a Brera Sterne figure for some odd reason. You can't actually fit either figure into the rear seat of the cockpit, so you're left with your VF-27 as a one-man show. 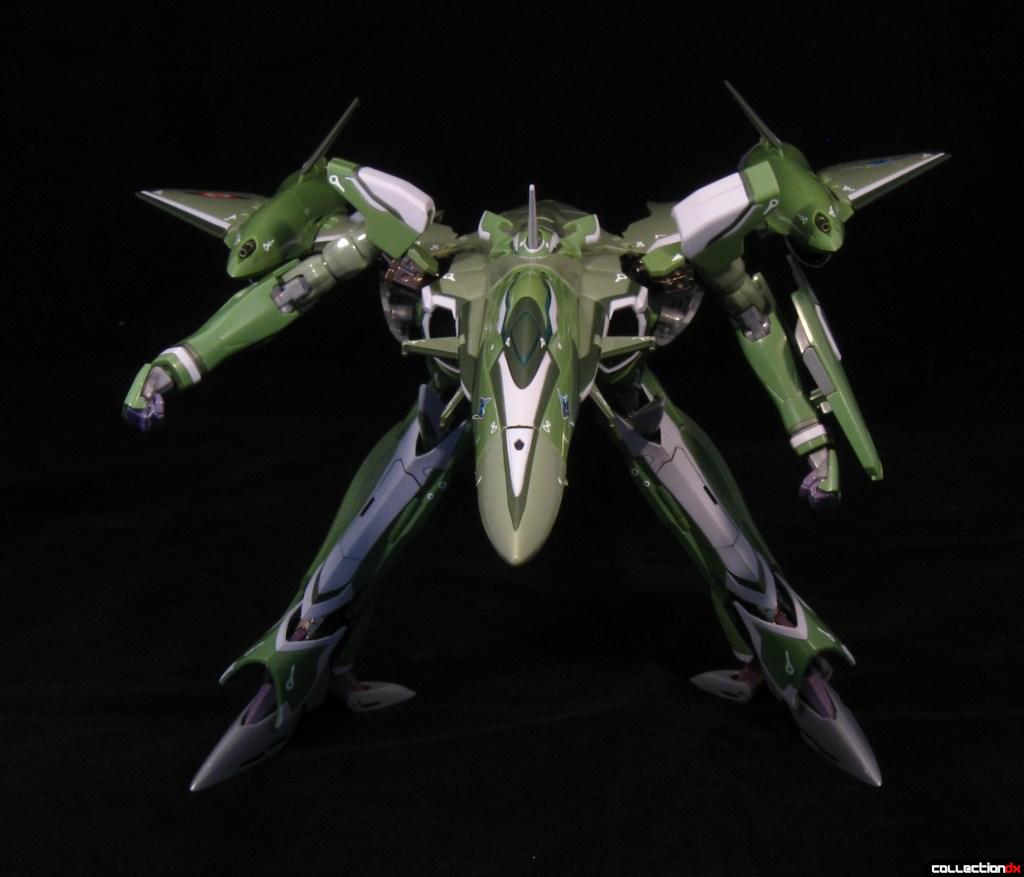 The VF-27 executes a great GERWALK mode. Both knees have swivel joints for the proper A-stance and feature telescoping portions to allow the legs to bend forward ninety degrees. One drawback to this toy is that there are four pairs of hands, with at least two required for even the basic transformation. It's a minor quibble for me, but some collectors are more amiable towards articulated hands. 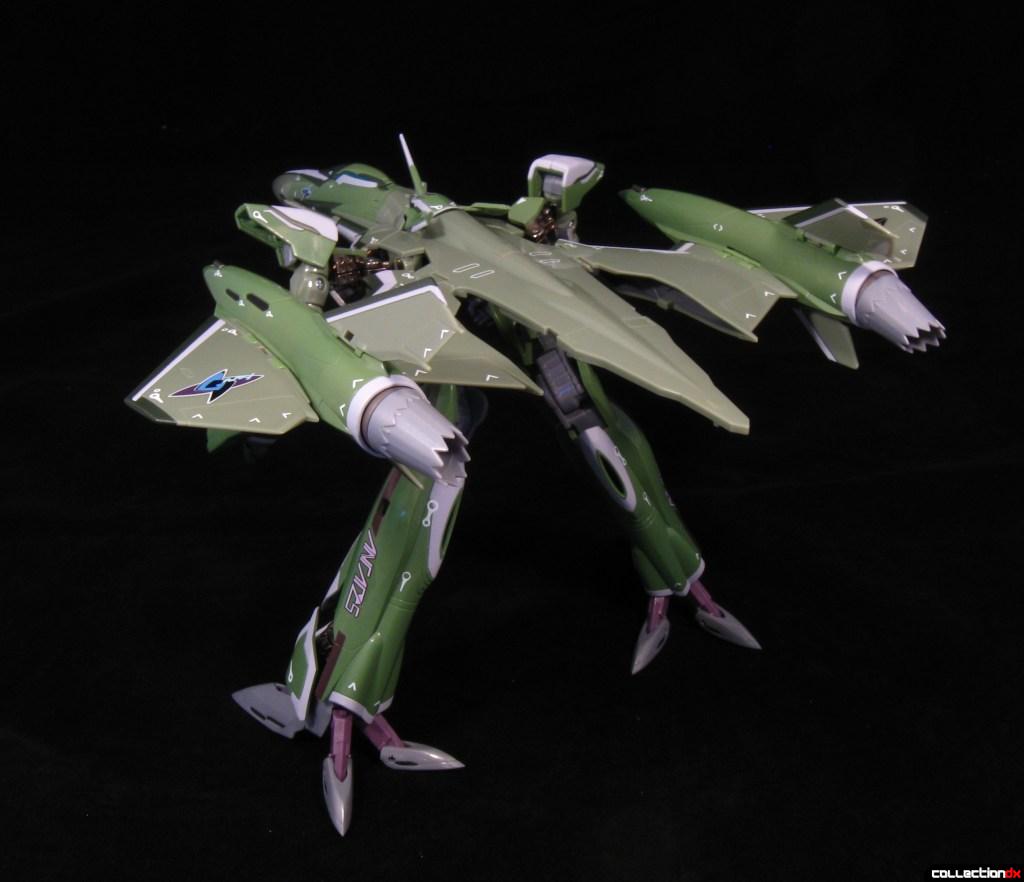 The joints in GERWALK mode are stiff enough to make the figure fairly stable in spite the very basic mechanisms involved. Even with the large outboard engines, the back of the GERWALK doesn't feel terribly droopy. 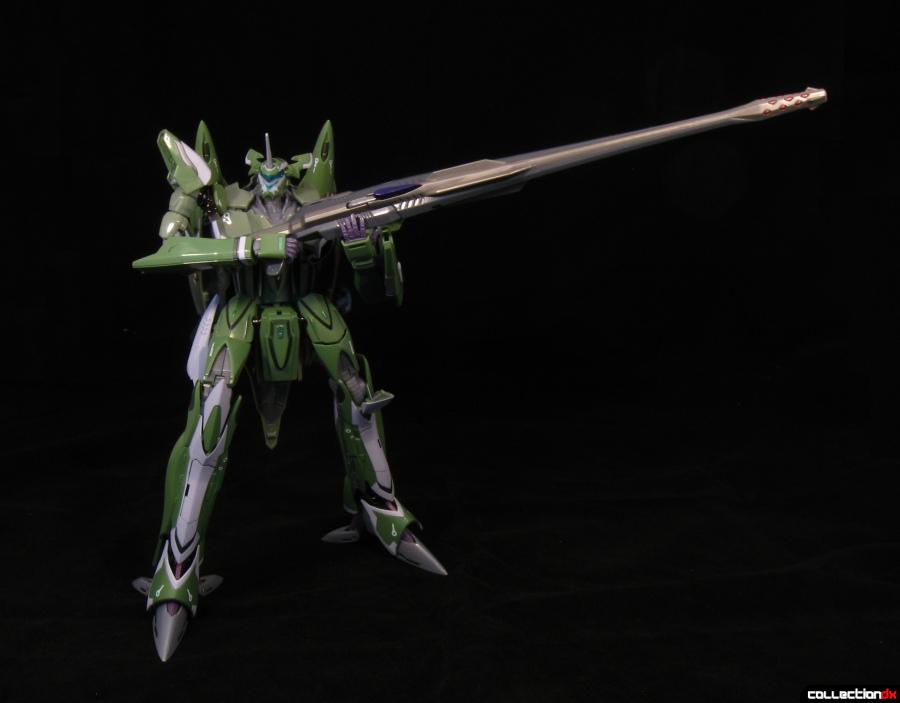 In Battroid mode, the green VF-27 is just as imposing as its commander as it brandishes the huge beam gunpod. 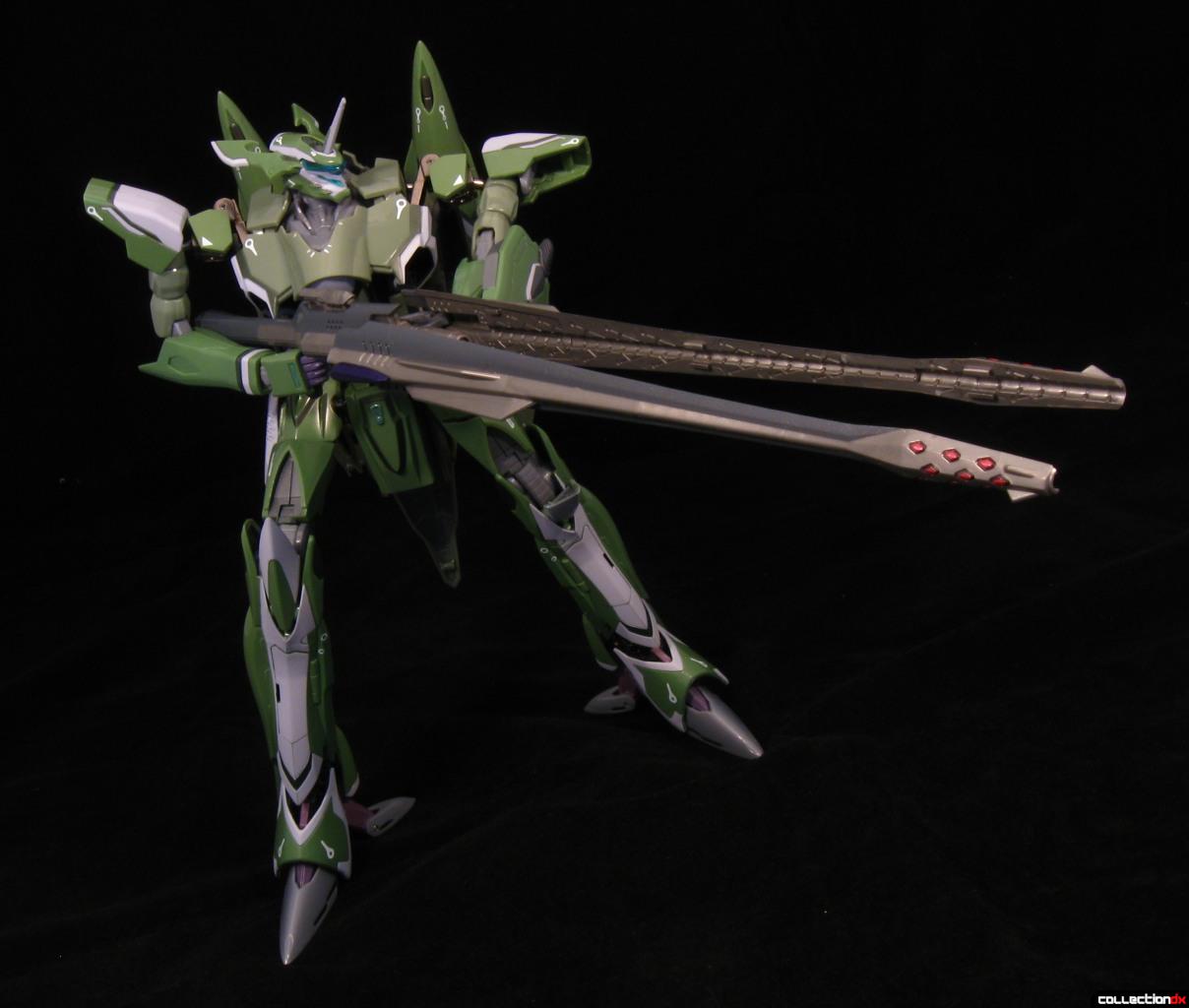 The gunpod can be opened for beam grenade mode. 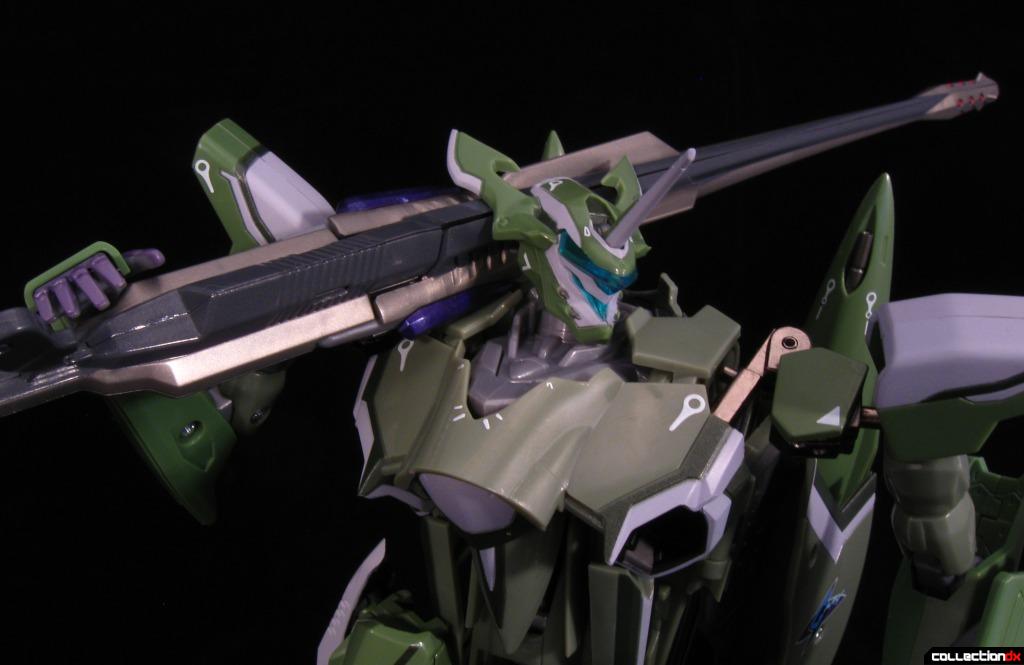 As your average cyborg pilot in a variable fighter, the VF-27 toy has true class. 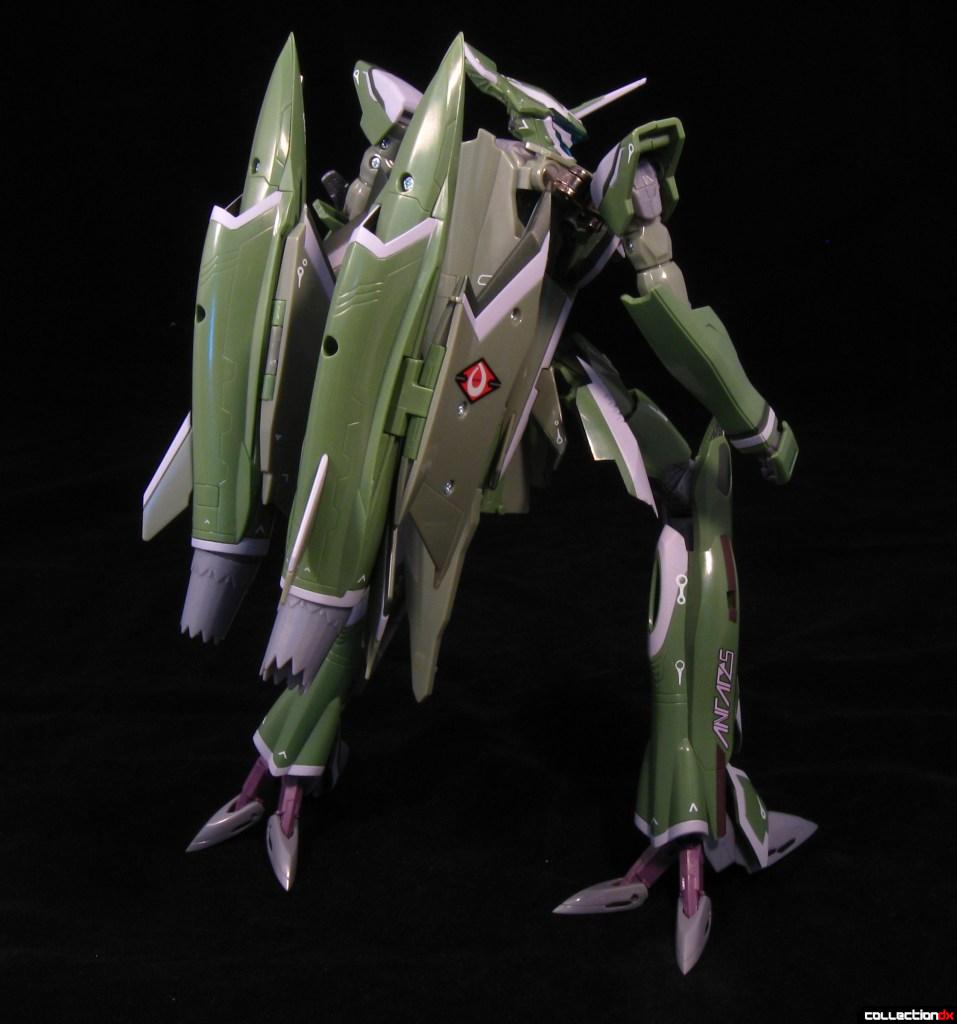 There's just something about the green that adds the overall attitude of this figure. It's just a regular soldier that is still leagues above the competition. 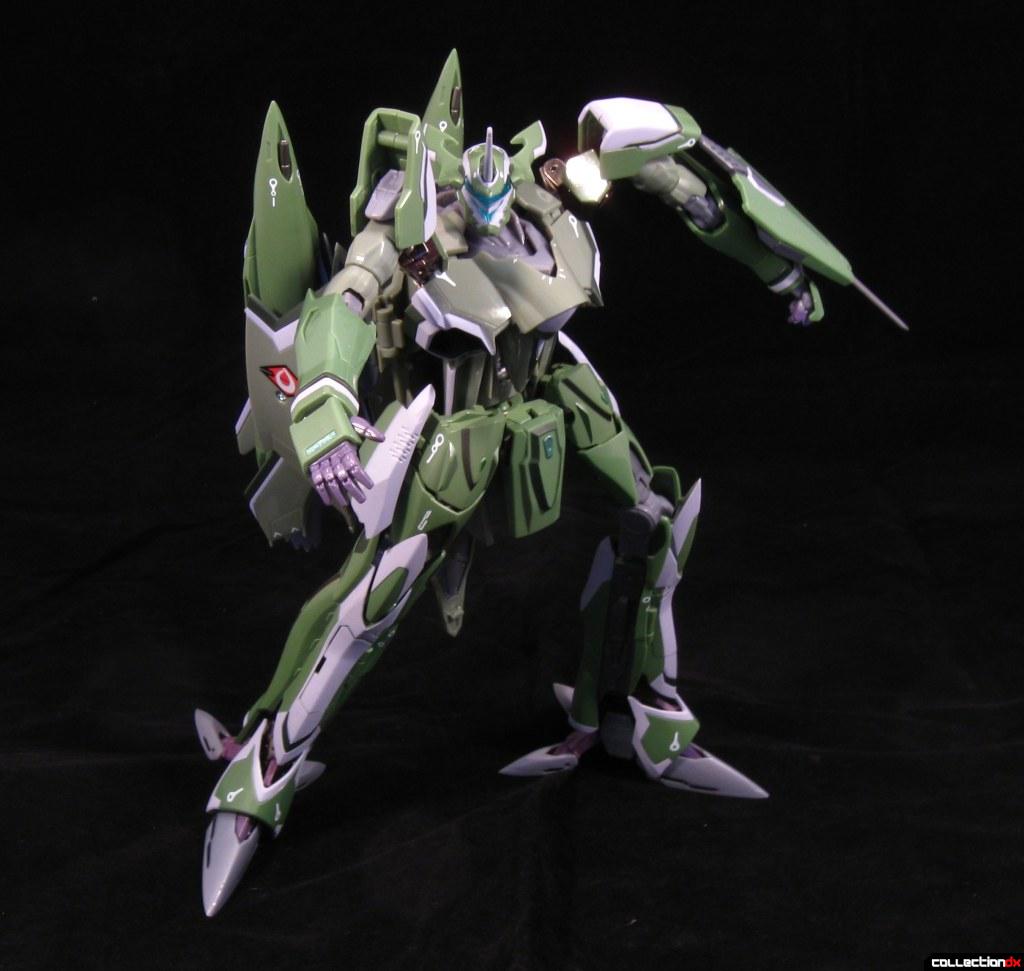 One of my favorite features of this toy is the retractable blade in the arm shield. The variant hands combined with the toy's impressive range of motion allows for many expressive poses. 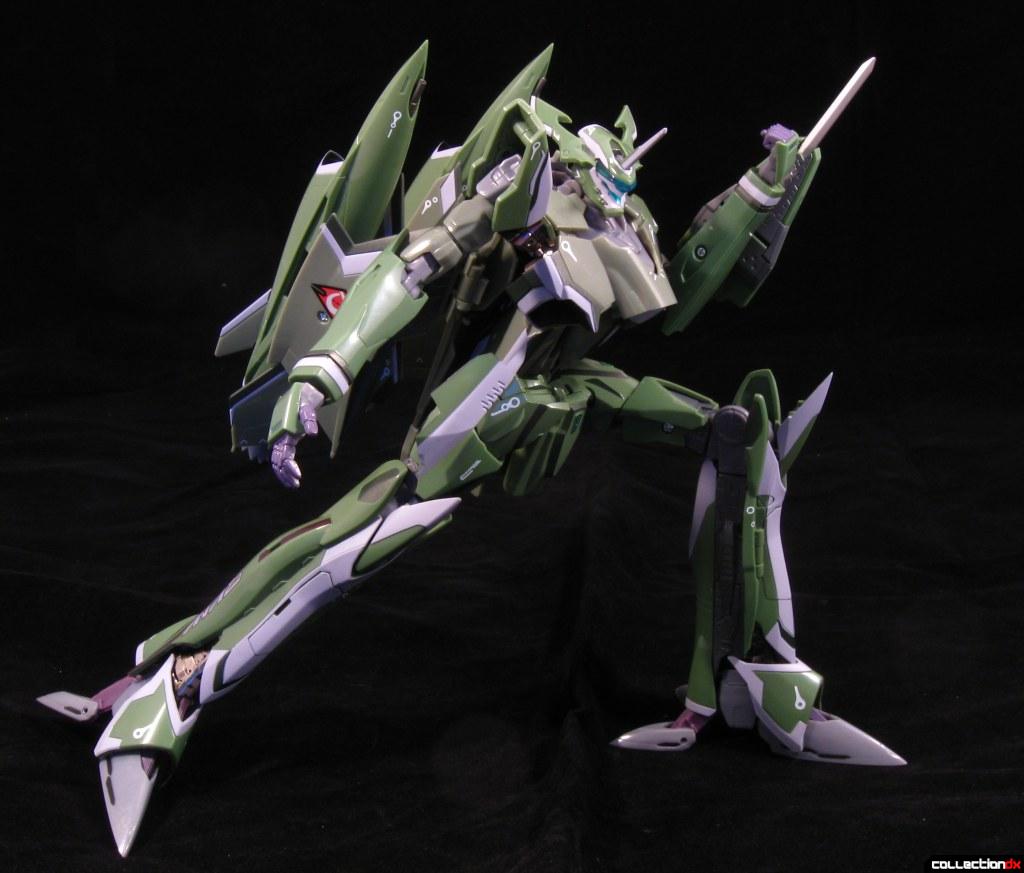 The legs especially posses a wide range of motion and strong joints. 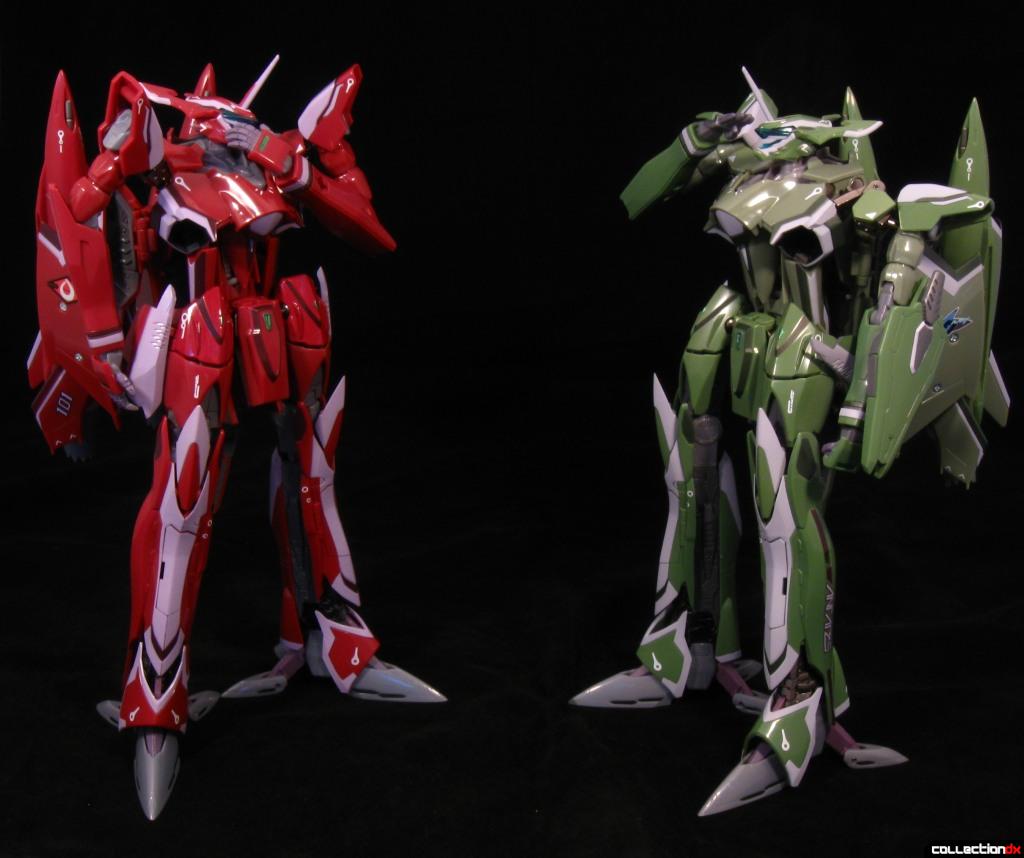 Even if these new troops are looking a little green to you, I can attest to the VF-27 being a proven toy release. It combines both the more pragmatic intricacies of the design with some smart engineering and solid materials. Sadly, this particular variant is still a web-exclusive and it's that extra barrier to entry that will keep most collectors away. Even so, for whatever it's worth to you, these VF-27 toys by Bandai are top notch.

8 comments posted
I love the design but hate

I love the design but hate those colors.
I'd love to see any the vf27 in more common valk colors, some white, gray, blue, black would be glorious.

I love the colors on this thing. It's unfortunate that this of all things is a web exclusive considering having a squad of three or four of them would be down right intimidating.

I like the new re-paint , but ive already purchased the Brera Sterne version, and the price of the green version is a bit much really even though it's web exclusive, maybe if it comes down in price i might purchase it.

Bandai would think of non-hardcore collectors. I miss the days of the Takatou reissues, durable, cheap, and simplified TOYS. Why settle for a non-custom paint scheme at the custom price? The only reason I'd consider this figure is because it SHOULD be cheaper than the original. Oh well, at least I have Transformers.

"I miss the days of the Takatou reissues, durable, cheap, and simplified TOYS. "

That was like two years ago. They re-issue those Takatoku toys a lot. Also "cheap" is kind of a relative term. Consider that the Takatoku VF-1 cost 3980 yen back in 1983 and jumped to 7800 yen 2008. Is that really a cheap toy or just more affordable?

And as far as being a toy goes, I did state in the review that the VF-27 is a durable toy. Watch the video to get a better idea of it. As far as simplification, well it is a VF-27 is not a VF-1. I think the VF-27 has a fairly simple transformation and this toy is about as simple as it can be done. I'd like to think my video that I demonstrated the transformation as cleanly as I could. I apologize if this did not come across clearly in the video. However in my defense, it is difficult to simultaneously handle and describe a toy while holding it in my outstretched arms and peering through a camera :3

"Why settle for a non-custom paint scheme at the custom price?"

Both versions have the same MSRP in Japan. Sadly the aftermarket prices aren't up to Bandai to determine. And I am a little confused by your statement that one paint scheme is non-custom while the other one is as simply changing the color the toy is made in does not affect the overall construction of the toy. One toy is no more or less complicated or "customized" than the other, regardless of what the character information claims.

"The only reason I'd consider this figure is because it SHOULD be cheaper than the original."

Why should it? Again the same physical product made in a different color isn't any more or less time-consuming in terms of manufacturing. And I disagree quite strongly with the notion that it SHOULD be cheaper. Yes it is inconvenient that the one version that is kind of made for "army-builder" is harder to acquire, but in terms of screen time, popularity, and character exposure, the Brera Sterne type is a much better fit for mass consumption.

I think you follow most of what I mean. Takatoku had fairly durable construction and a simplistic transformation. There wasn't as much emphasis to being screen accurate, and that's what I like. Watching your review, the macross frontier valks look fiddly, ESPECIALLY that tiny post that connects the shoulder to the torso (I don't care for metal content, but I hope the bulk of the shoulder joints are metal). You say, "Unless you were a totally cool and unique badguy like a Zaku or Stormtrooper(Boba Fett you mean?), kids were hesitant to buy the cannon fodder." Less demand should = less cost in the aftermarket. A simplified version of this that has as few parts as the Takatoku vf-1 would please me greatly. Fact is the materials here aren't so space age that they warrant a 3x price tag of a Takatoku, that's just what the niche market is willing to pay. Transformers of comparable size retail $40. Cheapen it up and mass produce and I'd be willing to eat the shipping and import profit. $80 would be good for the non-career collector. Good pics, btw.

I think that the issue is you're coming at this from a viewpoint of "these are toys first and foremost, and toys are meant for play, and if the design restricts play then it's a bad design". Which is not an incorrect attitude to hold, but it also means that toys like the Yamato Valkyries really aren't intended for you.

Also, "less demand should = less cost" isn't really correct when you look at the way these are produced. It's more like less demand means there'll be less sales, but it still costs the same amount to run the production line, so each unit has to sell for more. (It's the same thing as how deciding to buy fewer F-35 jets means that the ones you do buy cost more.)

Yeah, I like my toys a little more simplistic, that's why I don't collect anything outside of transformers and I used to follow sentai until the horrible lines that followed Daiboken. And yeah, granted rarity always comes into play foremost in economics which is why they do limited runs of less liked color swaps. Good business model.