I don't know about you guys, but Batman is one of those characters I can't get enough of. Just when I think I've had enough of Batman, there is always something that gets released that makes me want it bad. I don't read the comics so most of my experience has been from the old Adam West show or from the movies and cartoons. I like a clean basic look to my Batmans (or Batmen?), not the silly "Scuba-gear suit" Batmans or "Radioactive armor" themed stuff made for kids. Revoltech has decided to give us a modern take on Batman based off of the newer movies, more specifically- The Dark Knight.

It comes in a neat book style box with a photograph of the figure decorating the front. 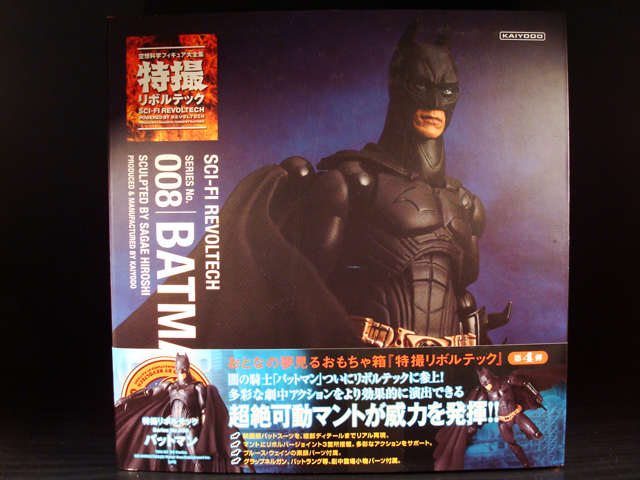 The back has the usual photography of poses and accessories. 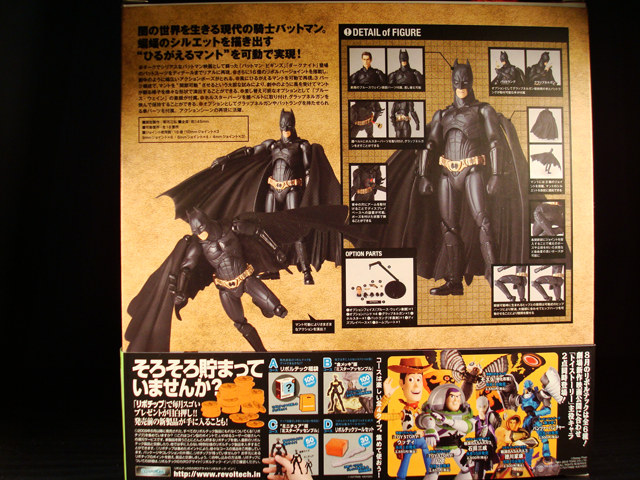 The box front opens up like a book to show off movie tidbits on the left and the figure and accessories on the right. The box flap itself is secured using Velcro "buttons". 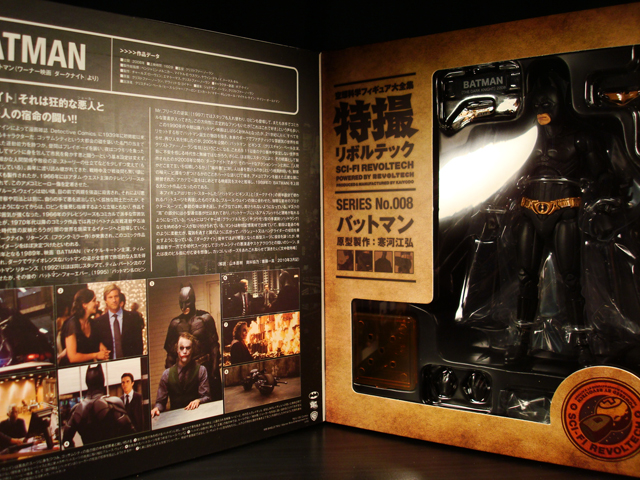 The figure itself comes nestled in a tray with a clear cover. 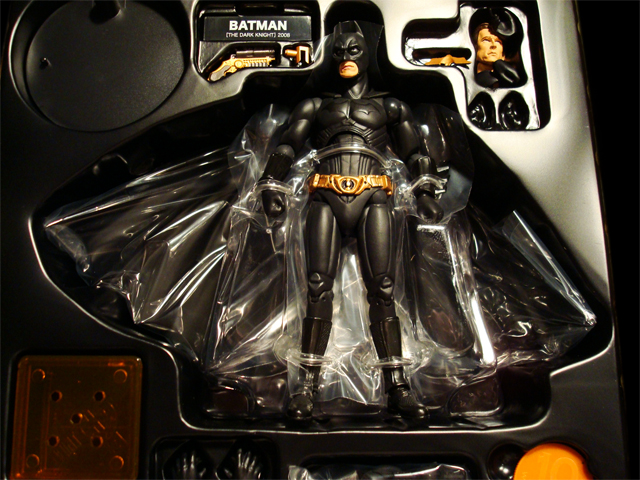 Here, I've pulled out the figure and attached the basic cape. The cape is a three part accessory. Only the main part of the cape is shown here. Once again, as is with most Revoltech figures, it doesn't take well to standing on its own without some fidgeting, so I've elected to make use of the included stand. 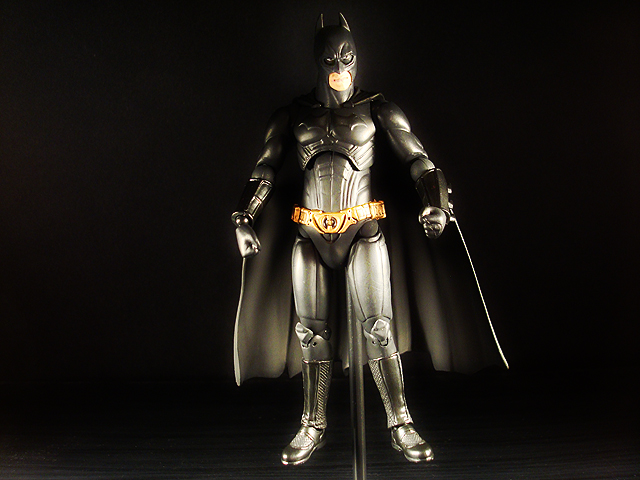 To attach the main cape, you just press it into this joint located on his back. Here you can also see the joint for his waist. 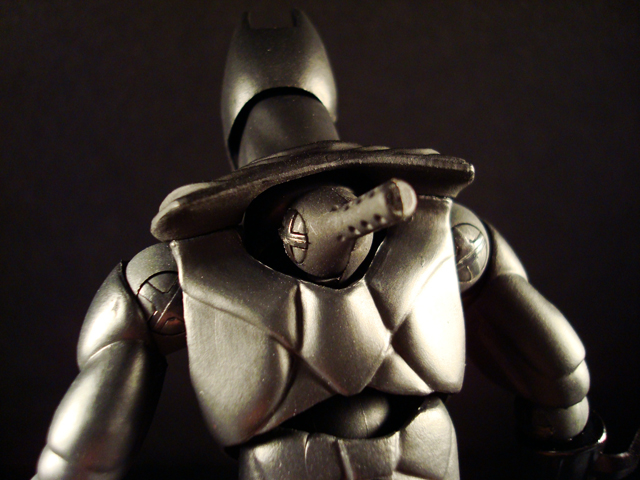 I mentioned the cape is three pieces. If you want a very dramatic look to your Batman, you will have to attach side pieces to the main cape by way of Revoltech joints. Here you can see the gaping holes behind his shoulder which hold the cape pieces. 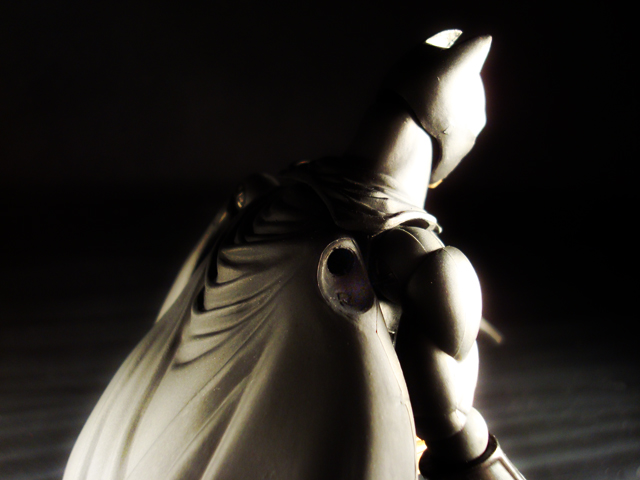 After you've attached the side cape pieces, you are left with this. The entire cape assembly is made out of a sturdy plastic with a matte finish. The weight of the cape hinders the possibility of getting Batman to stand on its own. 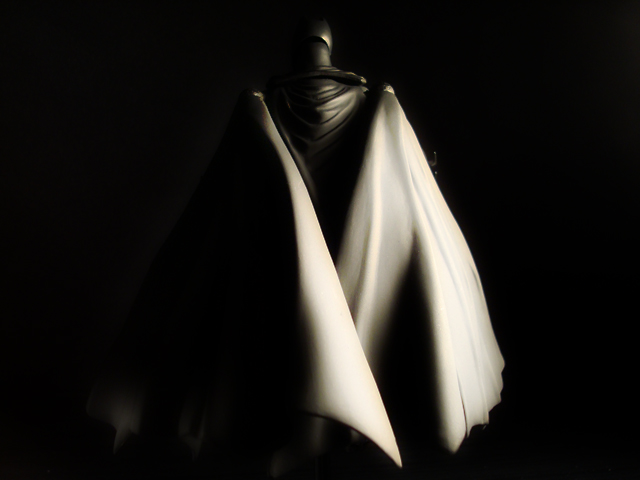 Here's the cool part and the reason why the cape pieces require Revoltech joints. The sides of the cape can swing out for a very dramatic look. I like how the finish used on the cape gives it a realistic look to it's texture. 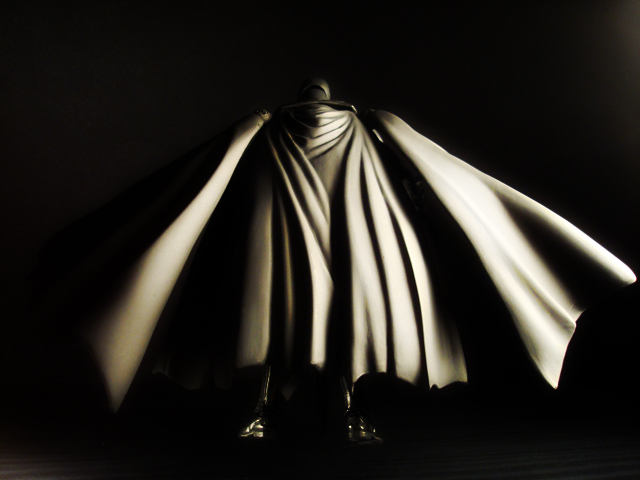 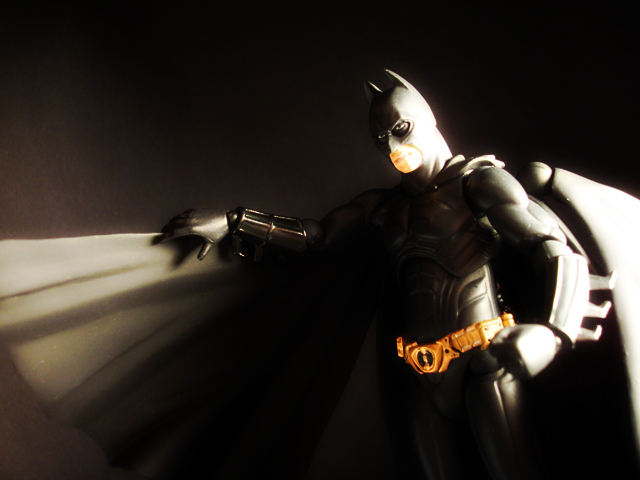 Articulation is what you would expect from a Revoltech although extreme poses were a little tough due to its design. I like that the shoulders shift from front to back. I also was glad he was able to achieve a kneeling pose. Not the prettiest pose, but it stays up on its own. 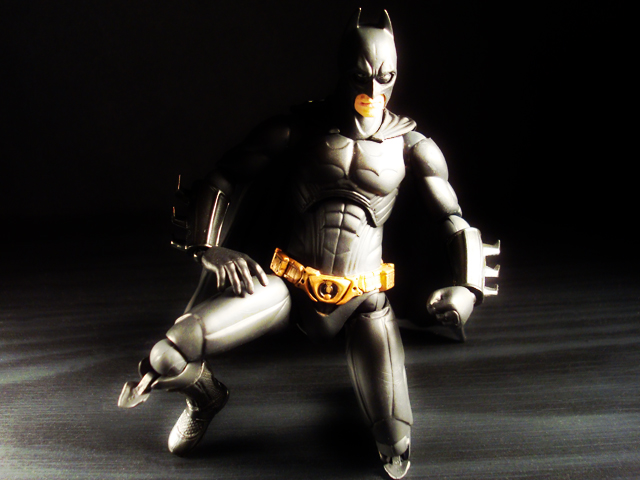 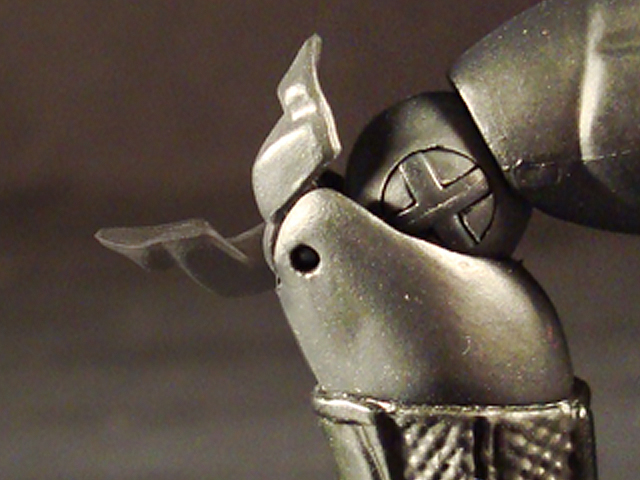 The neck is of a two-piece design with good movement.

His "buttocks" is hinged on a small Revoltech joint so that when you bend the knee, you can get rid of the unsightly gap.

For such a small figure it has very nice sculpt with good depth. 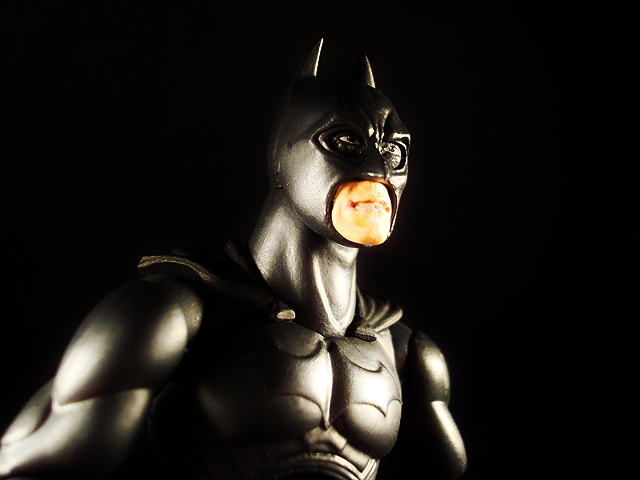 Here you can see his face up close. Notice that the eyes are sunken in and separate from the mask giving it amazing detail compared to standard figures. 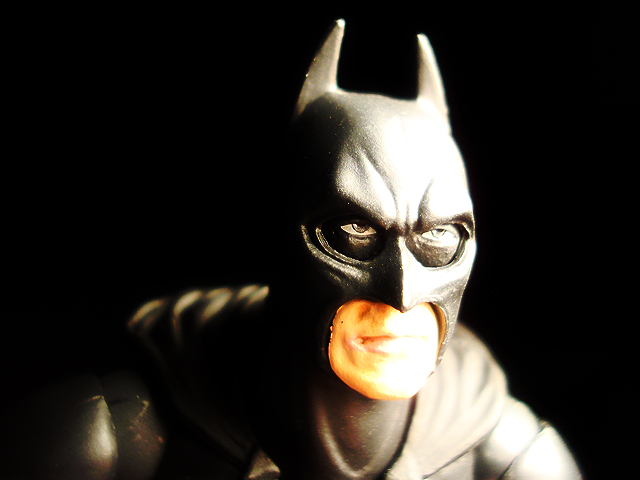 Let's move on to some accessories. He's got this really cool Batarang that slots really nicely into a special alternate hand. I love the end result of this pose. 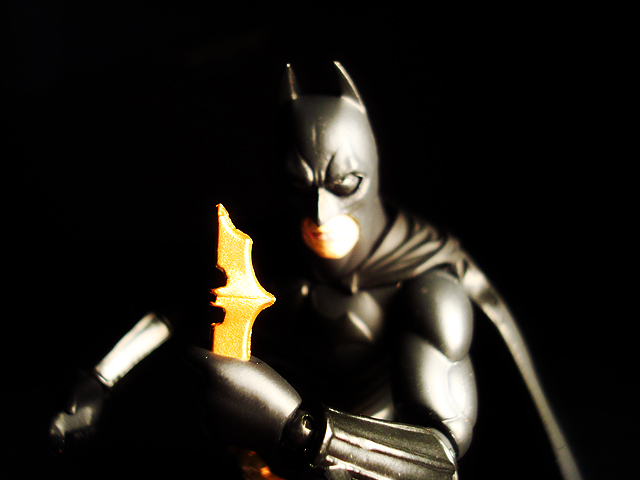 He's also got this pistol of course... 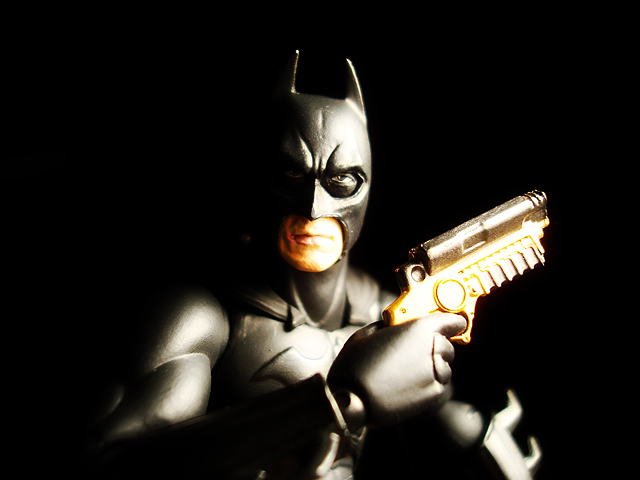 ...which stows away nicely in his Bat Belt. 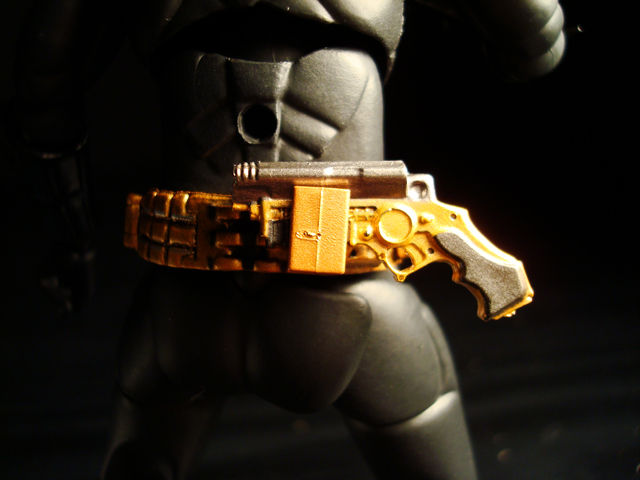 The only other option pieces are weapon holding hands, open hands and this neat little stand that has a mini plaque with his name. 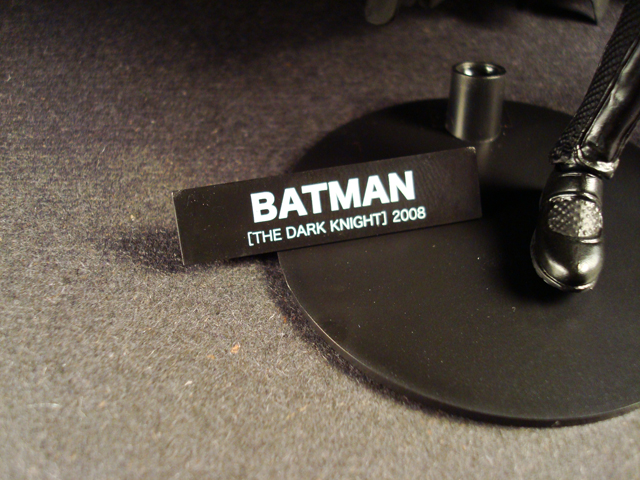 That way you can pull of fancy poses like this. 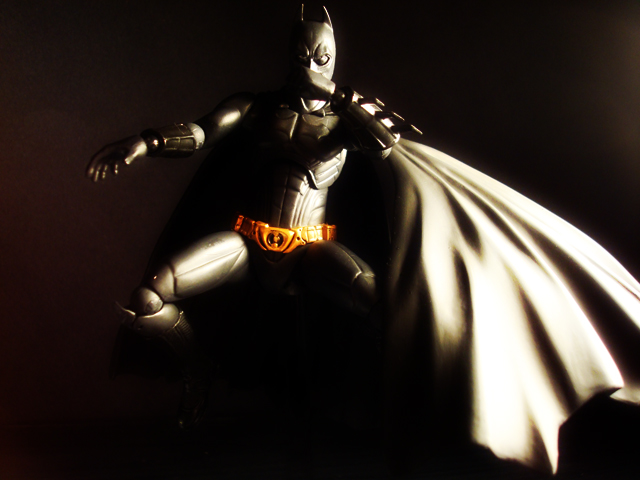 Now I bet some of you were waiting to see if this came with an alternate head. Well it does. I don't know what to think of it really. It's not the best rendition of Christian Bale but for its size it pretty darn good. 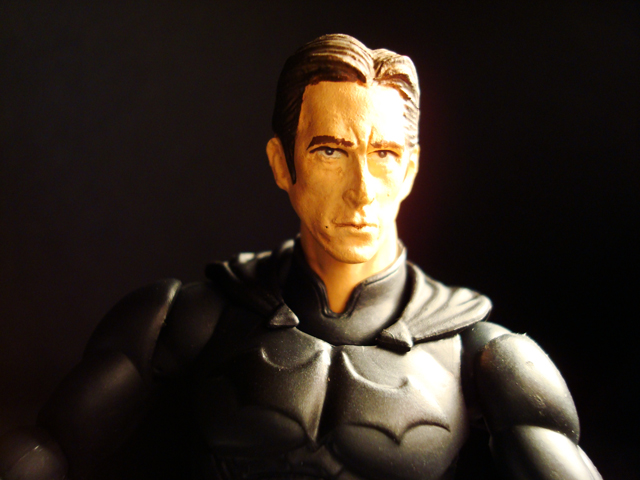 I'm really excited about this Sci-Fi line of figures. There a lot of great stuff coming out in this line so keep a look out.

Got nothing against this review because it's a good coverage. I just got no love for The Bat anymore since that Batman's the most ridiculously overrated cash whore ever since he tops Wolvie(no offense Bat-Wolvie fans, I'm just saying here).

Personally, I would love to pay top dollar for a Revoltech Superman & Green Lantern w/ powers that lights up. A Revoltech Supes w/ light-up heat vision & a set of heads(one for X-ray vision, one for freeze breath, one for Clark Kent) & a set of fabric made business suit for his secret identity & a phone booth for a dress-up + Green Lantern w/ a light up power battery & ring w/ loads of green energy morphing weapons & effects + stands would be astronomically cool. If anyone's a DC fan here you might agree that they're the kind of toys that's worth buying.

Excellent pictures Mr. Chachi. You hit the dramatic lighting effects on the figure against the black background in all the right beats.

Thanks for the compliments. I agree he's overdone but alas he's got a special spot in my heart. I could care less about the trillion figures out there for kids, but I loves me a Batman at his most basic. Especially blue/grey versions. I miss my Mego Batman...

I gotta give you credit Mr. Chachi, you really picked up the ultimate Batman toy with wings that can really spread. That's a keeper right there for any Batman fan. :3

And yes, I can't get enough of BATMAN,too.

I agree perfectly with you as I prefer the 'Normal Costume' Batman to those with 'exaggerated' accessories.

The Revoltech figures are really good value for money but those darn ball joints...just keep me off from buying them.

For the best Batman figures, Hot Toys are the best but alas, they are extremely expensive!

great review, excellent figure, really want to have one