The Voltes V Respect for Volt in Box is a repaint of the 2006 GX-31 Soul of Chogokin Voltes V. The paint scheme is a tribute to the classic DX chogokin Volt-in-box set, which was released in the US as the Godaikin Voltes V.


This toy though, is far from being a regular repaint. Bandai actually corrected a few flaws and added in a few new features for this release. In my opinion, if you only get one SOC Voltes, get this one. The SOC Voltes V Respect for Volt in Box comes courtesy of Anime-Export.com The tribute begins with the box. From the outside, the box has an old school feel, with the box being eerily reminiscent of the Godakin version. Why would Bandai design box for a Japanese-release toy that is reminiscent of the US release version? Boggles the mind.... 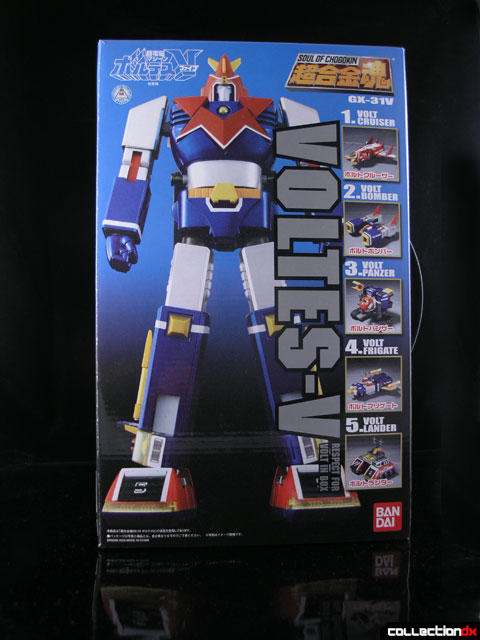 The box is made of a thicker cardboard than your usual SOC release, with an old-school handle on the top to carry it around. 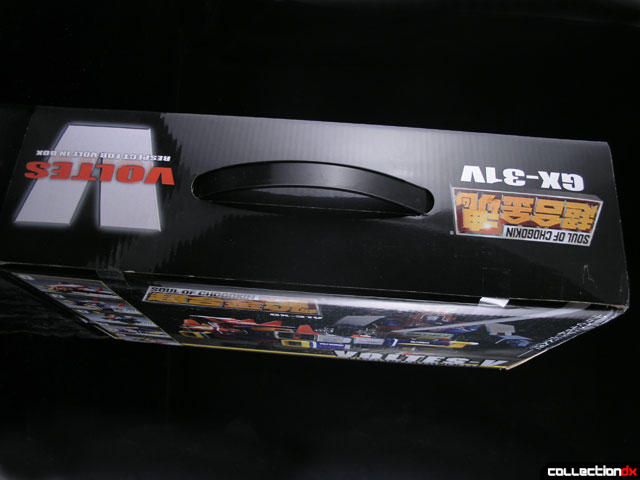 Inside the box you get a Styrofoam tray, with a Styrofoam lid. When removed, you get an insert that is die-cut around the parts of Voltes in the Package. This insert is a clear homage to the Volt-in-Box set. 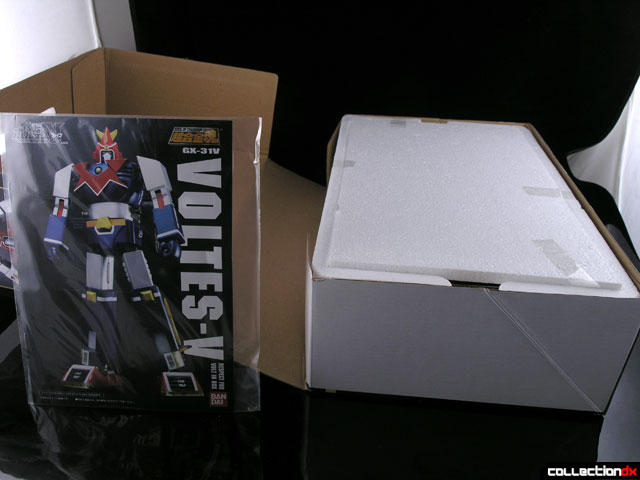 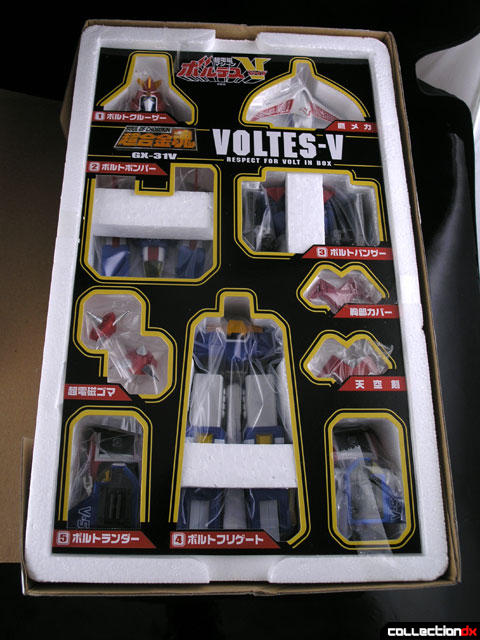 The five Volt machines combine and form the mighty Voltes V. Each machine is made of diecast metal and various plastics. The paint decoration on each is directly inspired by the color scheme of the classic chogokin, but it is not an exact duplication. Volt Cruiser The Volt Cruiser is the smallest Volt machine, and aside from paint differences, is the same as the regular SOC. It features slide out missiles on the sides of the cockpit, and folding landing gear. 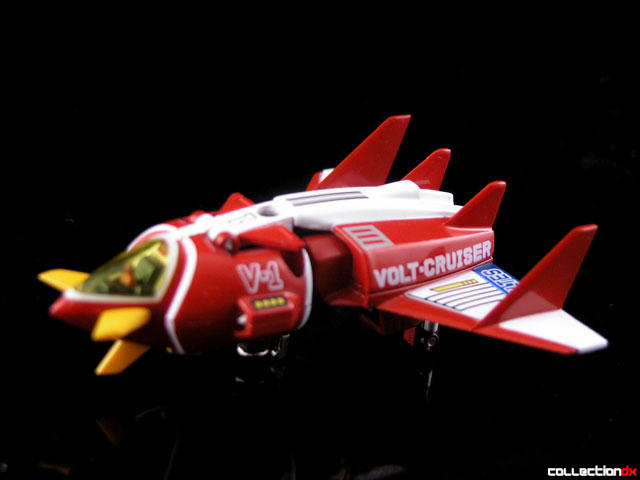 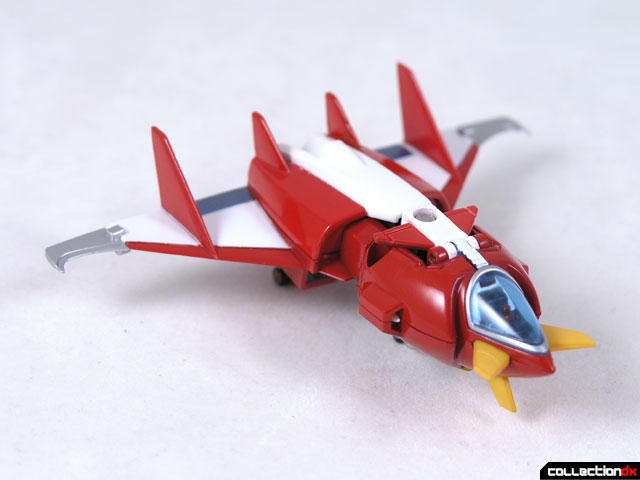 Volt Bomber The Volt Bomber is a flying craft that becomes the arms of the combined Voltes V. In vehicle mode, it's still not so precise a form, but it serves its purpose. My original complaint still holds with this vehicle, that you have to plug in four sets of wheels beneath the ship. Bandai should have found a way to make this gear stow away in the vehicle. There is a mold change in the lower arms, but I'll address that in Robot mode. 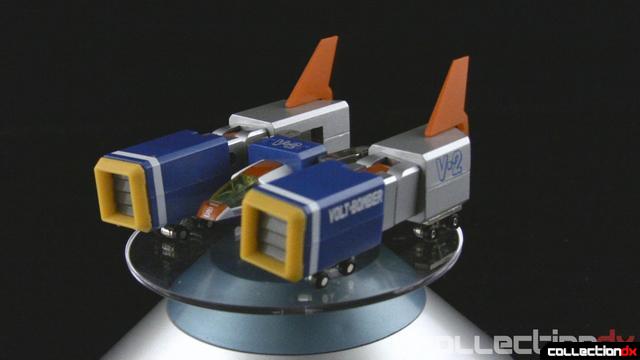 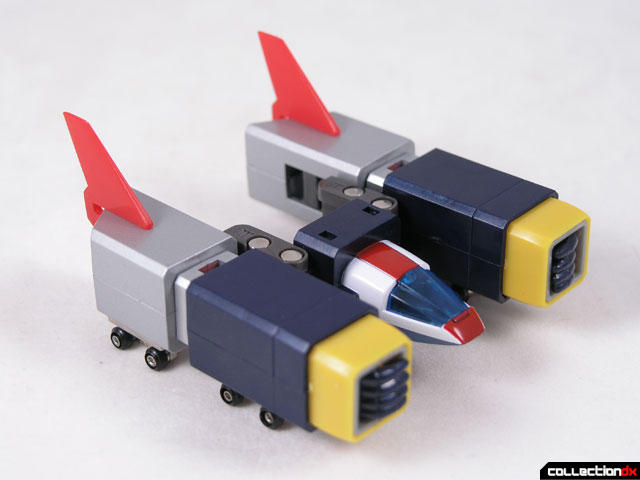 Volt Panzer This vehicle is the mandatory tank-tread vehicle that is found in many robot anime of the day. It forms the torso of Voltes, and the body is largely diecast. The only change to this vehicle aside from the paint is in the struts that attach to the tank treads. See this link for a good example. This is how it works. 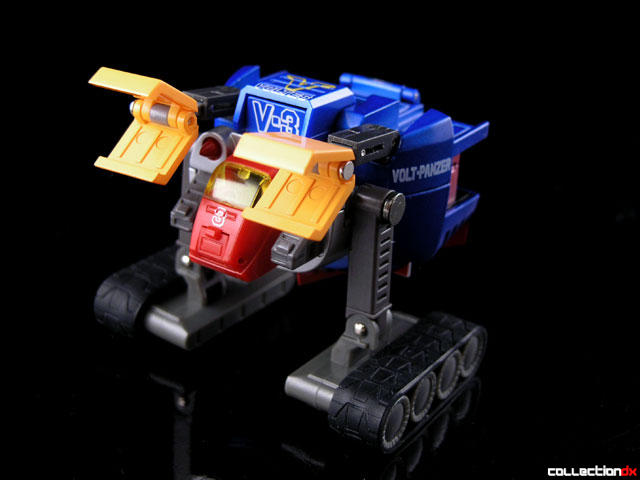 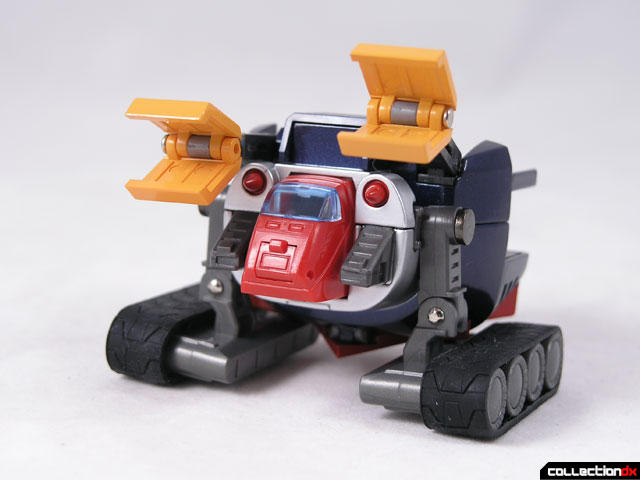 Volt Frigate The volt Frigate looks like some sort of aquatic vehicle and it forms the legs of Voltes V. One noticeable change is to the antennae on the towers on the rear of the vehicle. On the original version they were topped with flexible grey radar dishes. On this version they get replaced with removable chrome sensor arrays, much like the original. 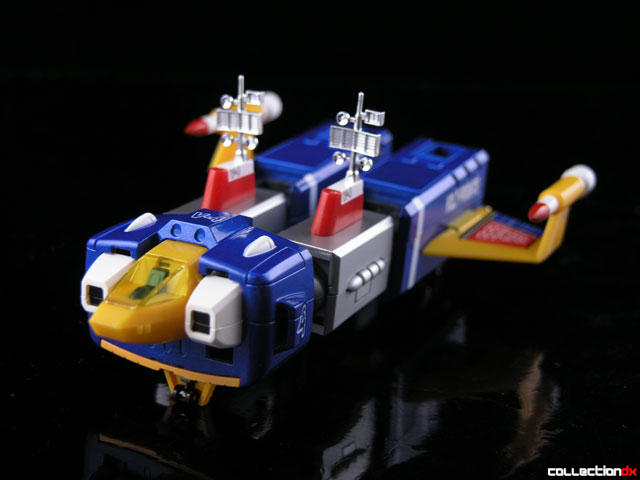 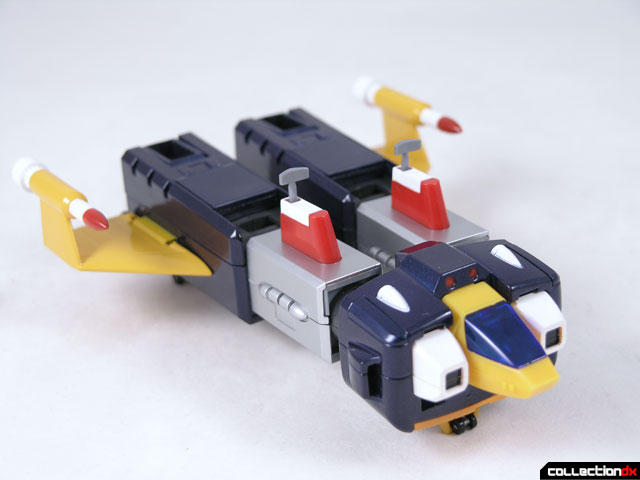 Volt Lander My favorite of all the Volt vehicles, the Volt Lander, become the feet of Voltes. Like the original, the doors on the front open to reveal drills. Still, they don't shoot. The antenna on the side have been replaced with chrome "claws" that connect to larger sensor arrays. 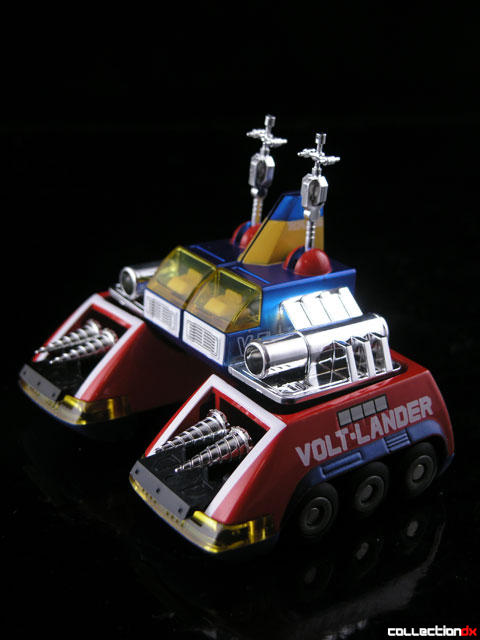 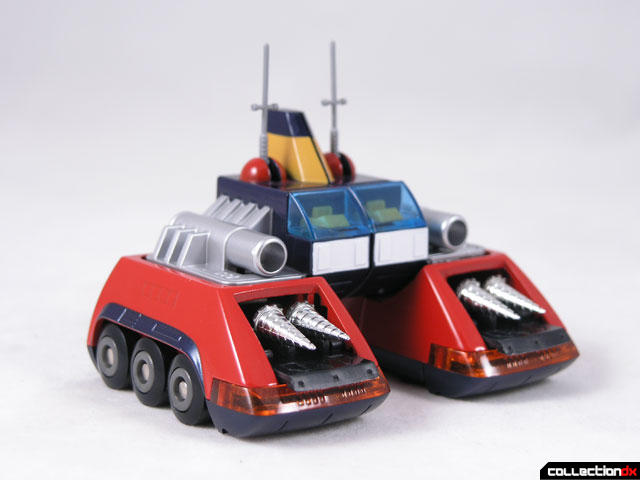 The combined Voltes V is a marked improvement over the first SOC. First of all, it's much more stable than the original. The hips are much tighter and the ankles hold much better than before. 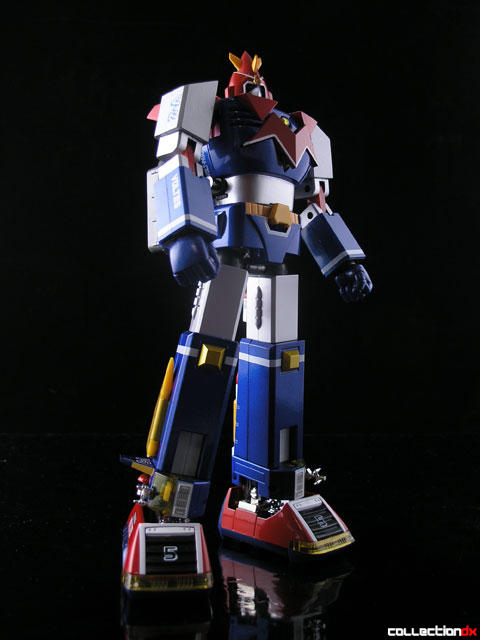 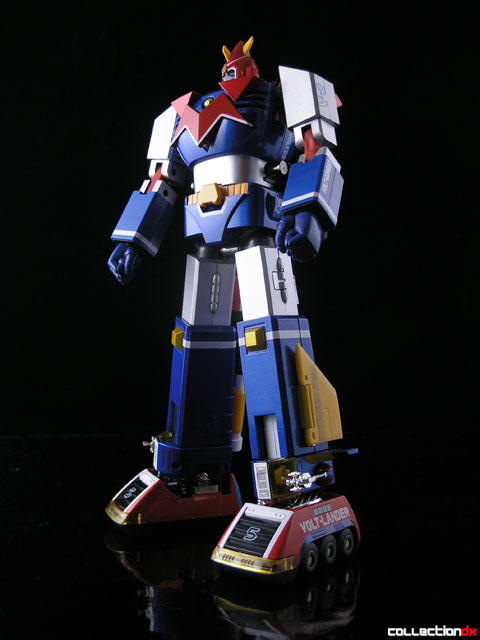 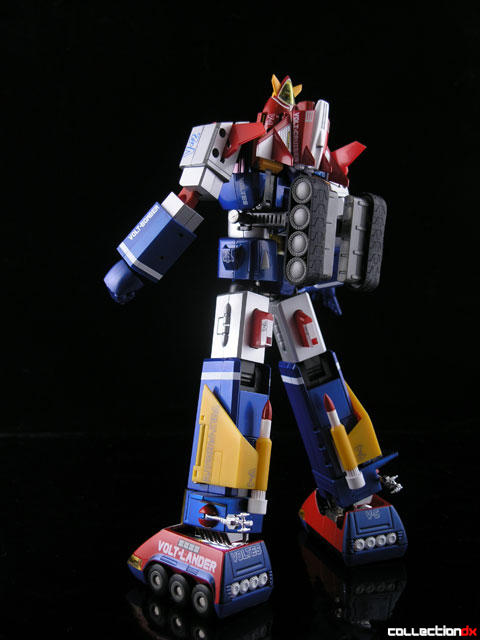 All of the prior version's weapons and accessories are present. The collapsing sword still fits in the chest. 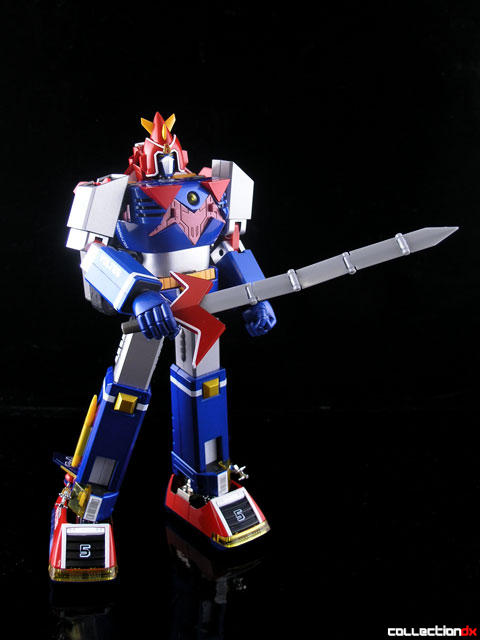 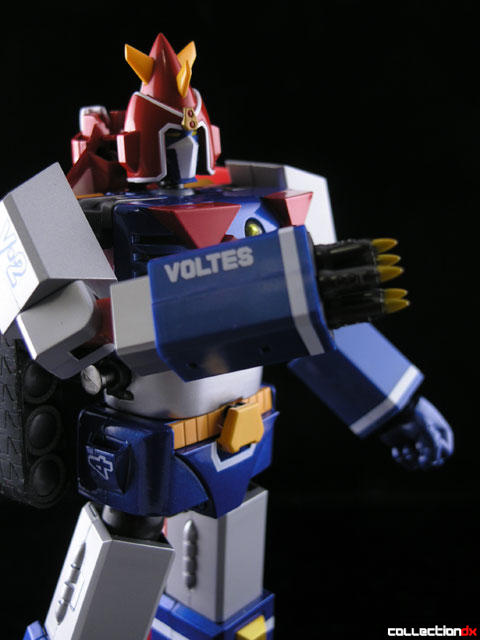 The Chain Knuckle is the same chain weapon from the first release, but this time they have added in a new feature. This time you can swap the connector out with a missile launcher. The end of the Chain knuckle combines with a second tip to become a projectile that fires out of the cannon. That's right, real, spring loaded firing action. 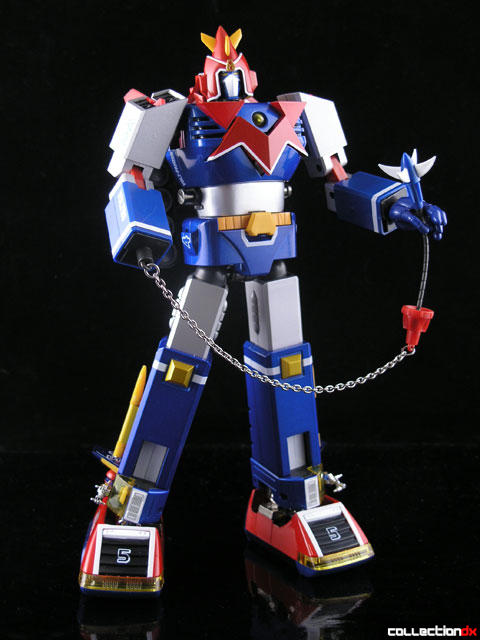 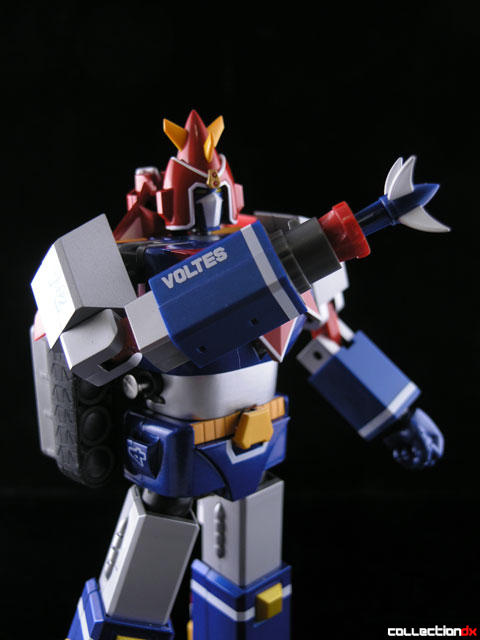 In the first version SOC, the Voltes Bazooka was a cannon that was stored inside the arm. It could be pulled out and the hand would tilt down. Now it has been replaced with a large missile-firing bazooka. The missiles look just like old-school Popy missiles (there are three included) and they fire a good distance. Unbelievably Awesome. 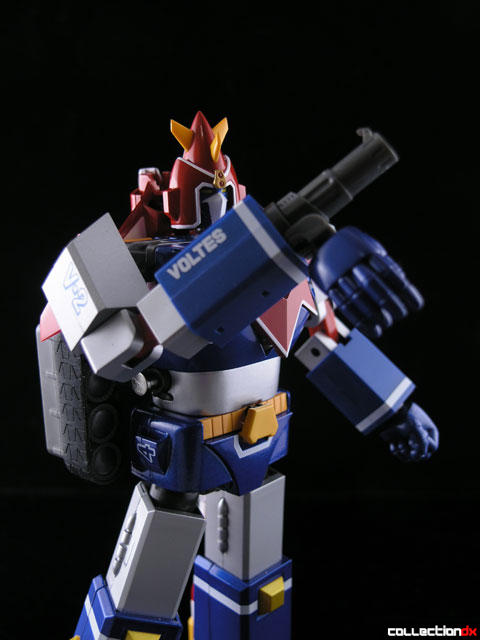 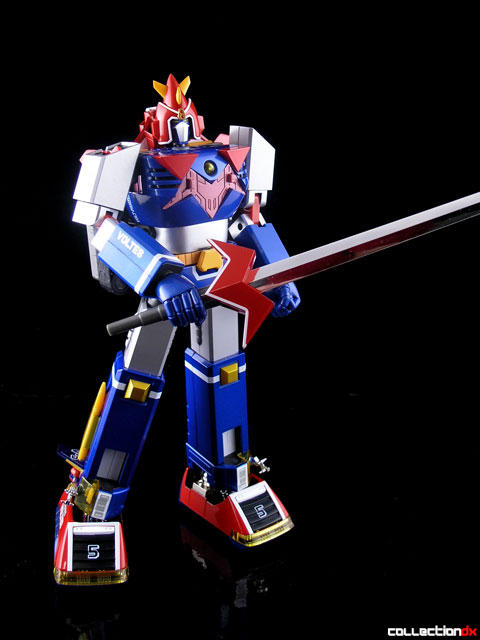 The Taka Mecha is the large bird shaped ship that can dock on the back of Voltes, and was never included with the original DX set. Funny, I never realized how much the Taka Mecha looks like the Raideen God Bird mode. Here it's labeled "Imperial Family Aircraft" 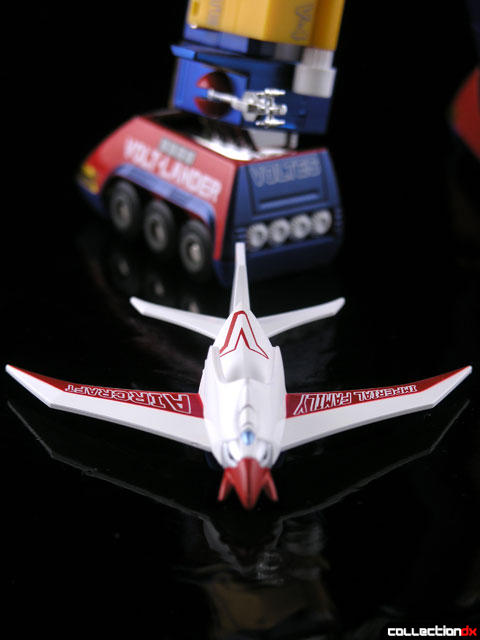 Here's where the Respect For Volt-In-Box really shines. One glaring omission from the original SOC was its inability to form the Voltank mode. While Voltes V never transformed into this mode in the show, it was a feature of the classic DX chogokin and Godaikin. The few small engineering changes Bandai made are all the difference. 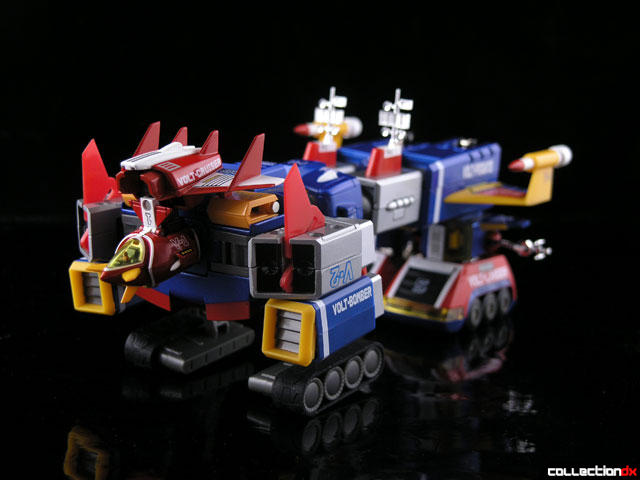 Two modifications were necessary to allow this transformation. First, the arms are now double jointed so that they can fold up to the shoulders. The entire lower arm has been re-engineered to do this. There are no longer smaller fists in the arms that slide out and there are not yellow covers at the ends. 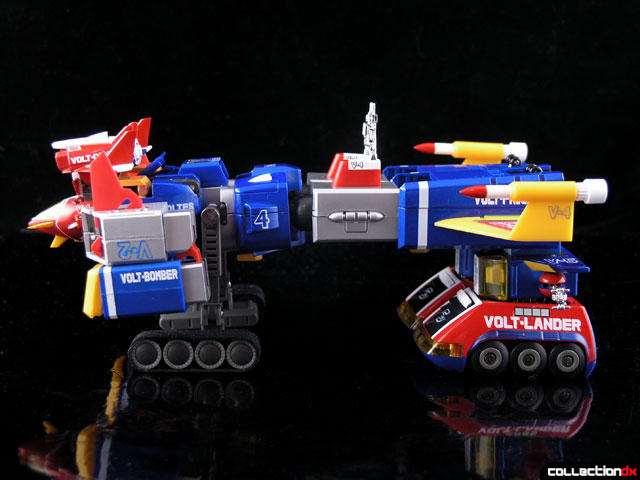 Secondly, the connecting arms to the tank treads are now longer and can be extended to make up the difference in height. 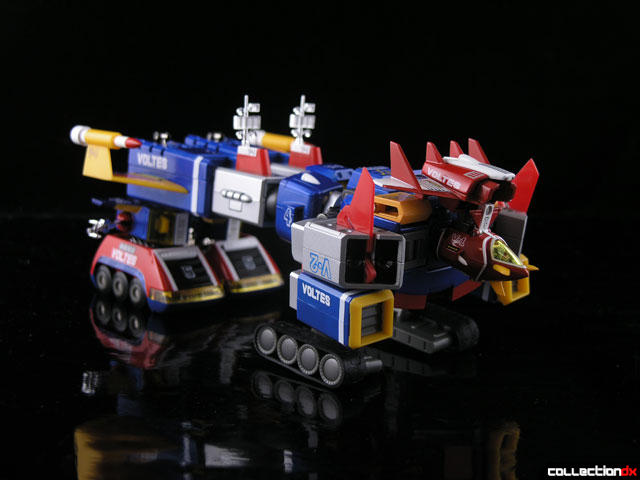 Beautiful, Glorious Voltank mode. The GX-31V Voltes V Respect for Volt is an awesome gokin, and the better of the two releases. That's not to say that the original sucks or anything, it is just that this one is so much better. You can get your Respect for Volt in Box at Anime-Export.com 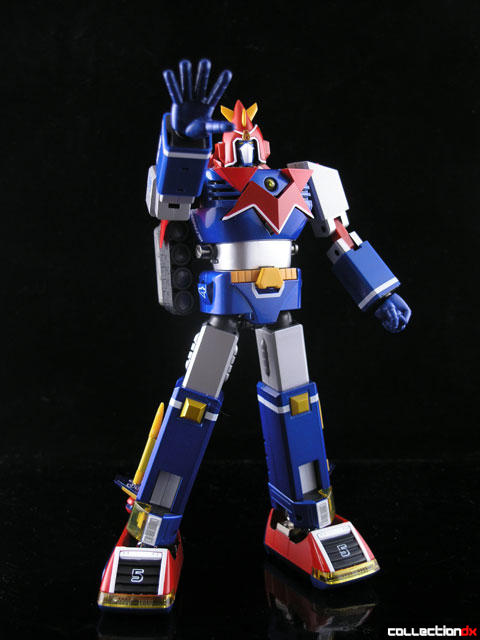 Great review! I'm not getting one since I'm a stickler for Anime correctness and could care less about the tank mode or the tribute to the old Godaikin figure. But I do like the added details and paint aps, looks cool in a tuner car, "Pimp My Ride" kinda way.

I'm glad you reviewed this one as I was wondering what it was all about. I love the Godaikin style box, a nice touch. I hope next time you can do a side by side photo comparison of both versions. Next week i'm picking up my first Soul of Chogokin toy.

of Voltes V's enemy beast fighters like the swordsman Gardo, the archer Desraa, and the half horse half knight Zoru Geru. The show had very cool looking beast fighters especially compared to Golion's.

After seeing the new version for myself, the original GX-31 is STILL better.

Nice review; it made me get one actually, and I'm loving it.

Here's mine with Escaflowne, which is about the same size:

I am really this close to buying one. Nice review btw! I have 2 questions, where is it made from, and where can I buy a genuine one? Thanks!