Ultra Magnus is one of those popular robots, who often appears in the Transformers universe, but, to chagrin of many fans, as a direct redeco of Optimus Prime aka. Convoy. And so he did in the Revoltech line, being a Friendly Shop exclusive. Yes, he's just a repaint. But to do him justice, this is one of the best representations of this character I've ever seen.

Ultra Magnus is often represented as Optimus Prime's twin brother, which gives Hasbro a good excuse to exploit this albino Transformer. Thankfully, this time he is exploited by Kaiyodo, with great results.

There are many armourless toys of this character, but they just don't feel like Generation 1 Ultra Magnus, which this toy depicts. This one not only does, but also is based on his comic appeareance. In the show Magnus never took off his battle suit so that kids don't mistake him for Prime. However, Dreamwave's G1 comics were intended for older fans who had no problem in differing the two. 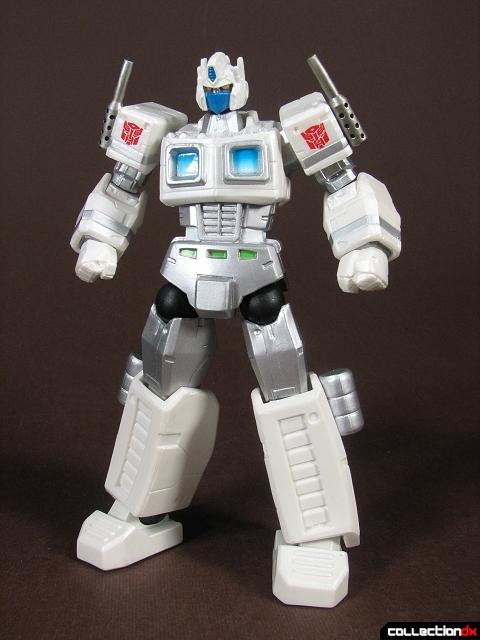 Ultra Magnus takes a major part in War and Piece story arc in which Earth based TFs return to Cybertron only to find it ruled by Shockwave, Magnus being one of his law enforcers. At one stage of the story, Magnus disagrees with Shockwave on how to handle the Earth Autobots, so Shockwave supposedly beats him to death and leaves to kill Prime. UM survives the encounter at the cost of his armour being destroyed and when he appears to aid Optimus later on, it is revealed that he dons a white copy of Prime's body. And exactly this form of Magnus is represented by this Revoltech. 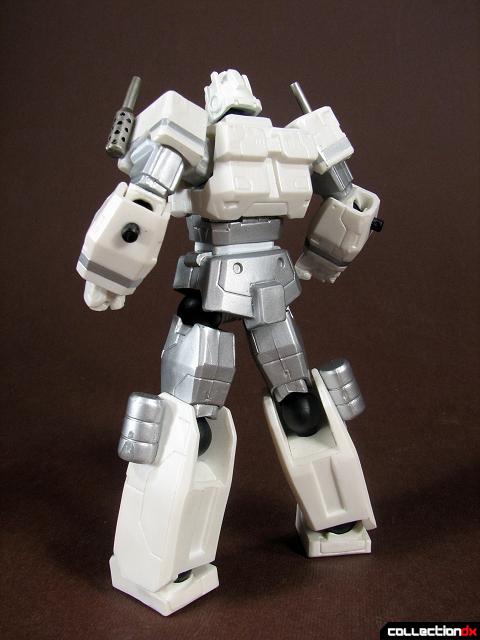 What can I say, I'm not a great fan of Pat Lee's Transformers, but they fit in the Revoltech line perfectly. Magnus just looks fabulous, he's sharp and definitely has some character. He almost looks alive. Even if this design doesn't immediately suggest his comic persona is capable of actually transforming into a trailer cab, it has some very cool details which make it somewhat more realistic (if you can say so about Lee's way of drawing robots) 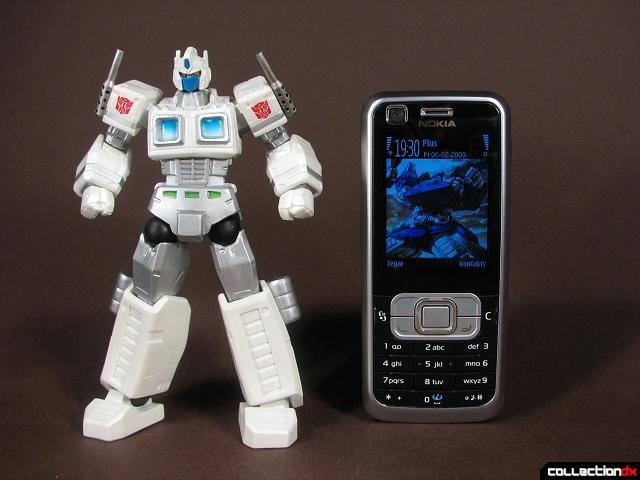 And now to show you how big he is (sorry, I didn't have Yotsuba when I took the pictures yet), my Nokia 6120c...yes, that's armoured Ultra Magnus on the screen ^^ 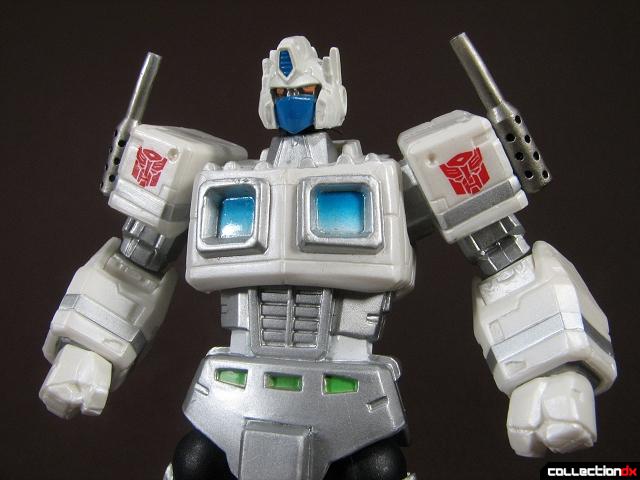 I find it quite interesting that this is one of the very few Revoltech that have their arms designed to be bent a bit outwards without the ability to squeeze them any closer to the torso. It's not a tragedy, but this may prove a bit unhandy when trying to do some poses where our Autobot is supposed to hold his hands and arms as close to each other as possible. Also noteworthy, the head and neck are double jointed so they can imitate movements of pidgeon's head :P 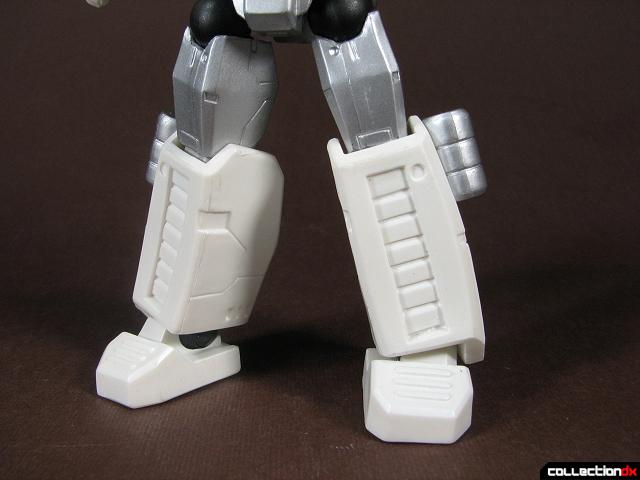 Legs are shown just so you can see the nice details applied there. And, they are designed to work with the base of Revoltech stand, if you ever happen to have a spare one. 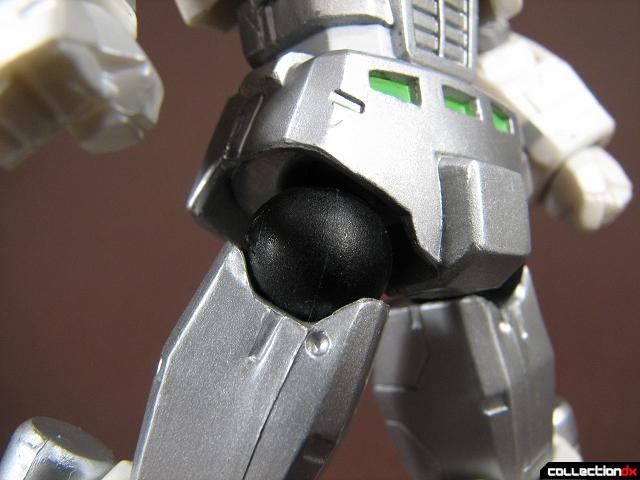 I must say, I'm quite impressed by the Revoltech joints and how hard it is to tell where the separate pieces begin. 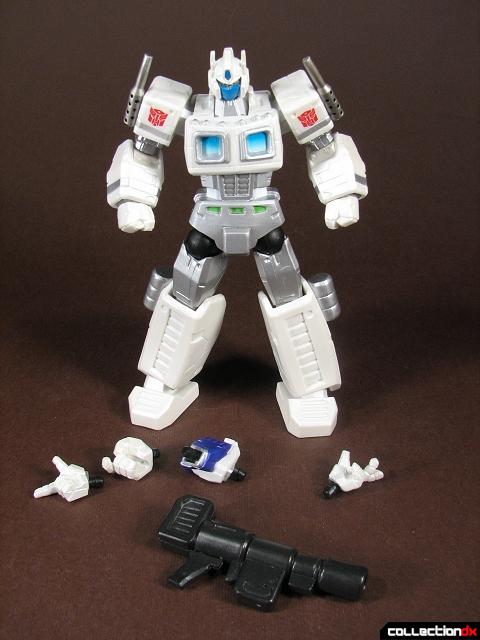 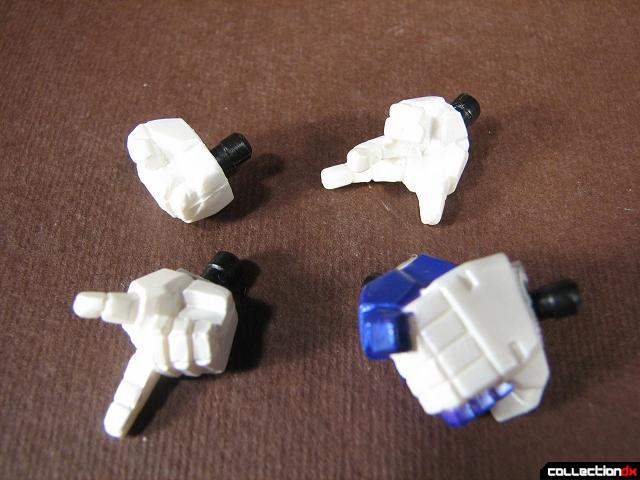 Magnus comes with some accessories, which include an Ion Rifle with rotating handle, and 4 extra hands, which include a pointing hand, an opened one, one to hold the rifle...and some weird looking one. 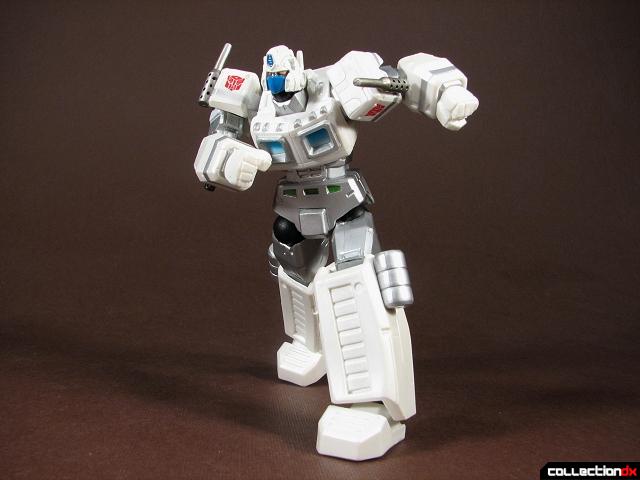 With his design and accessories, Ultra Magnus can achieve various cool looking poses. 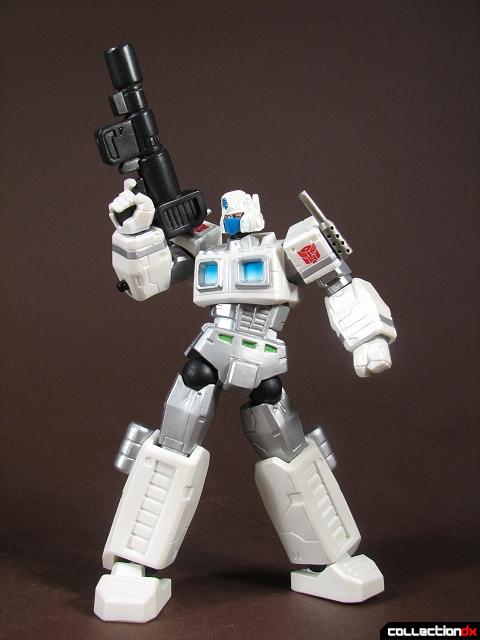 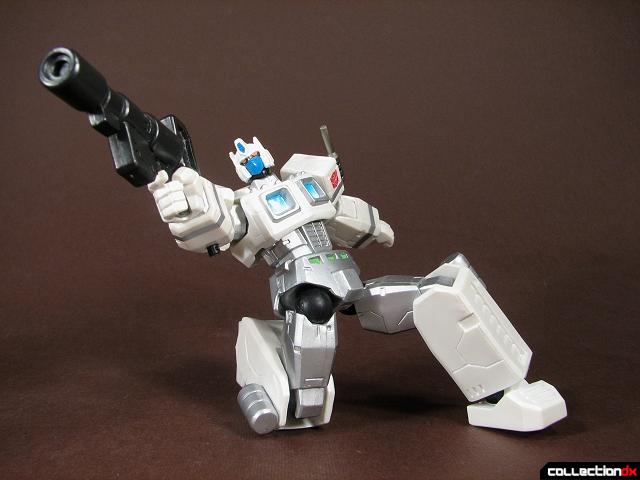 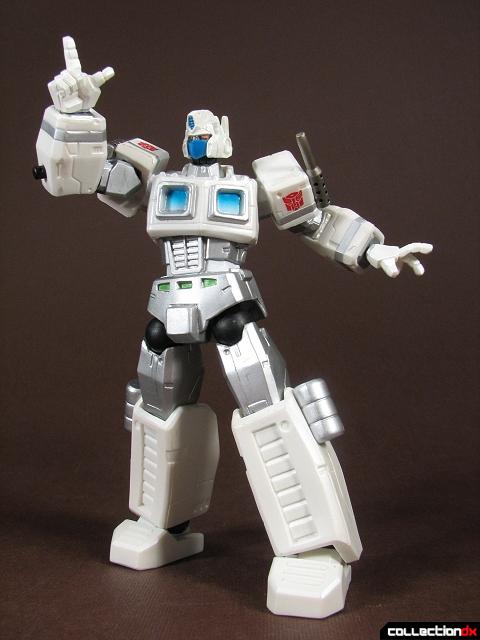 “Um, if I can propose something, let's just blow this planet to tiny little bits and forget about the whole war thing, ok?” 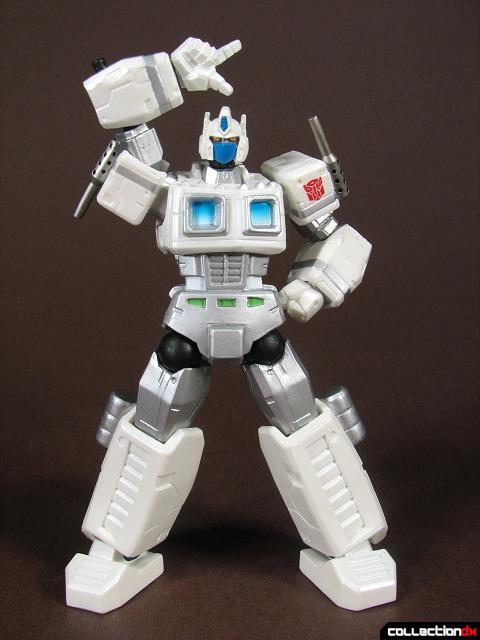 If I didn't knew better, I could almost swear he's trying to copy one of Sailor Moon's poses... 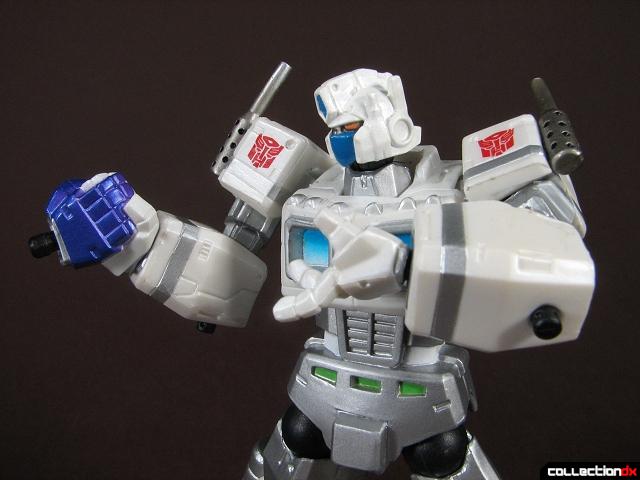 Ok, I think the weird hand thingie needs some explaining. Many Revoltech accessories are designed to interact with other toys from the line, and this one isn't exception. What you want to do is you plug the hand from one side to Magnus and to Prime on the other end, so that they can shake hands like brothers sometimes do. I was almost sorry I didn't have Convoy while taking these pictures (they're about a year old ^^) 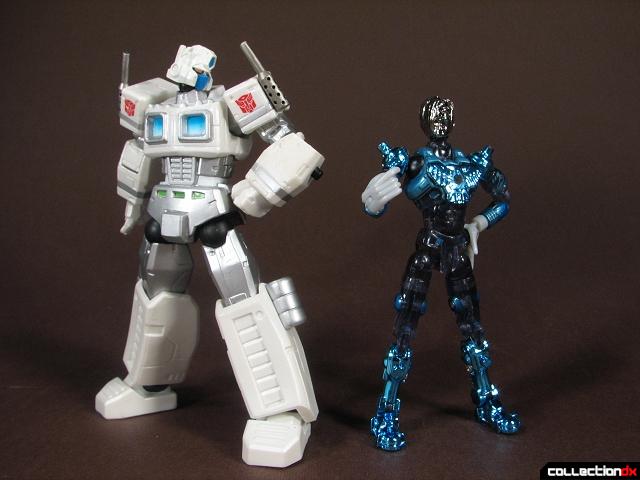 Some of you could probably see this coming. They both are action figures and yet they are so different that I recently lost any reason to compare them as toys competing for your wallet's insides. Still, they look good next to each other on the shelf. 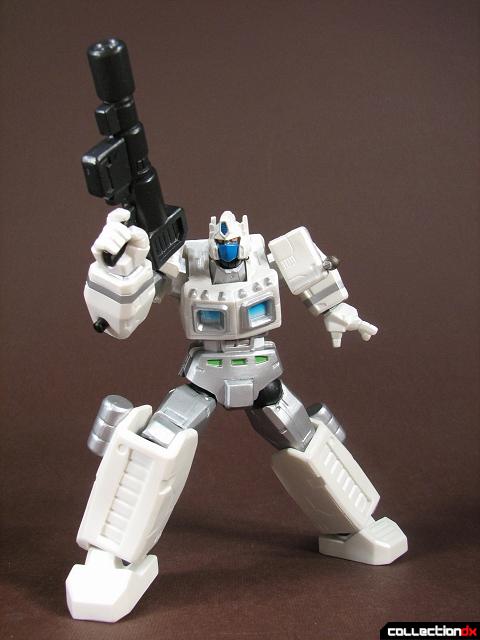 When I was preparing these pictures I wasn't interested in full-time collecting of Revoltech and so the piece you see here was borrowed from a friend collector. However, now that I actually began collecting them I wish I had this toy, I just find so much more unique and interesting then Convoy. A word of advice, should you spot this guy somewhere, don't hesitate and get him, there's no way you'll regret it.

10 comments posted
You know,I've heard all the

You know,I've heard all the stuff about Pat Lee as a person,we've all heard it. But objectively,I really like the guy's art.

I'm not sure what you mean about Pat Lee maybe I'm out of the loop? But I've read some of the new G1 comics, some are every good for us older fans. I like this Revotech toy. Why does a robot who's body is basically and exoskeleton need armor anyway, just a though. Ask Pat Lee right.

Pat Lee didn't invent the armor,it's on the original toy!

Anyway,I don't really know the whole scoop but suposedly before Lee shut down his comic company,he stiffed a bunch of writers and artists using the excuse that he didn't have any money to give them,but in actuality he pocketed a great deal of money.
That's the story that's gone around,I'm not saying I can prove it or disprove it,I'm just telling you what's out there.

This toy I thought was an original Diaclone toy (pre-Transformers) if I have that right? So wouldn't that mean it was created back in the early eights even before Transformers the movie?

True enough, Ultra Magnus is no one else than recolored Powered Convoy from Diaclone, his armour colors are reflected on the Fansproject Powered Commander armour.

Was the blurb on the main page made in sarcasm? Because as of fairly recently, a white redeco of an Optimus Prime toy to make Ultra Magnus has been pretty common.. Off the top of my head I can think of Masterpiece and Classics.

Nope, it wasn't. I agree about MP and Classics and would probably add War Within Titanium to the list, but I guess that's all for the G1 Persona. There are countles other toys named UM and resemble him in naked mode, but none of them represent the original character that I'm refferring to here.

Wow, I had no idea Dreamwave had imploded. I personally thought Lee's version of the TF's was the pinnacle of how the G1 robots could look. I no longer collect comics, so I didn't follow his books, but I picked up a poster or two. I never realized people disliked his art. Hmmm.

Magnus looks good. I just can't help thinking of him as "variant Optimus". LOL. My Magnus is the big, clunky car carrier...who said "damnit" on the big screen. ^_^

Yeah,I felt the same way until I got a little more immersed in the online "community" and it turns out a lot of people think he sucks.