Bossk is one of the 6 Bounty hunters seen on the bridge of Darth Vader's Star Destroyer in "The Empire Strikes Back". While Boba Fett gets all the glory, the other Bounty Hunters get no love. That is, until Hasbro included them in their Vintage figure line.

This may be one of the greatest Star Wars action figures ever made. 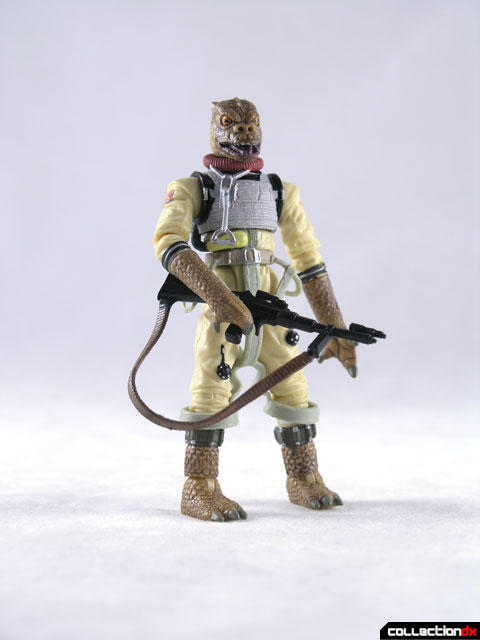 Now I am no Bossk fanboy. I love the bounty hunters as much as the next guy, but Bossk never did it for me. The vintage version just looked lame. But I ended up reading Tales of the Bounty Hunters, a 1996 anthology of short stories based on the characters tasked with finding Captain Solo. It fleshed out each of the characters so much that it renewed my interest in those lesser characters, even Dengar.

So why is this figure so great?

First, the vintage card back. Hasbro included Bossk as part of its vintage collection, a line that brought classic characters and packaging to the new era. The card back is the same as the vintage toy, but the figure is all new. It takes advantage of all of the recent advances in Hasbro figures. 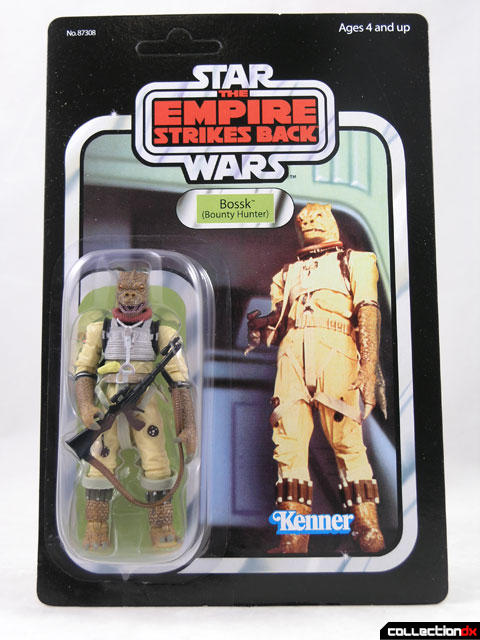 The sculpt is awesome. Every scale stands out, every button on his outfit. Paint application is flawless. His outfit is molded out of several different pieces, with the breathing apparatus and parts of his flight suit being separate. 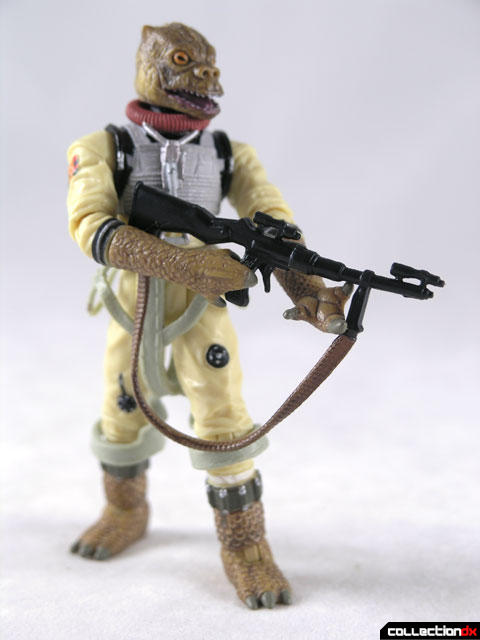 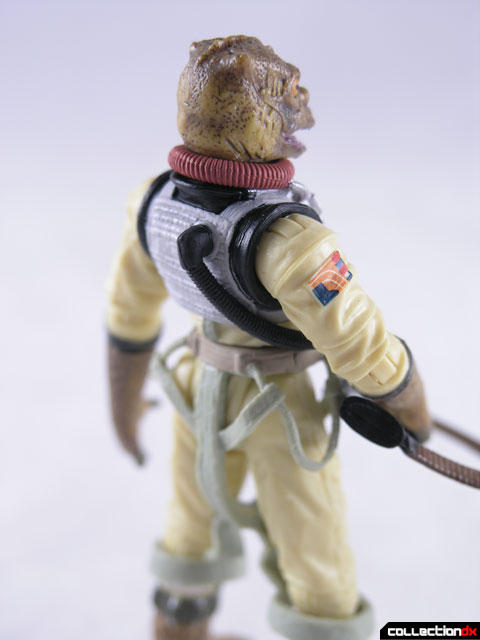 Articulation is amazing for a figure this size. I count 17 points of articulation in this little guy. He just looks amazing. 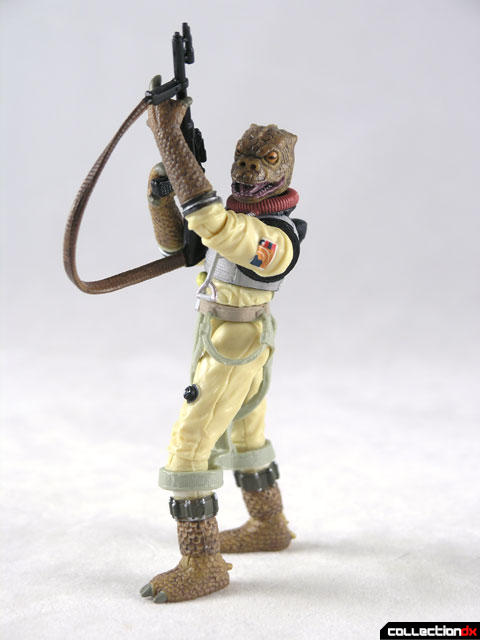 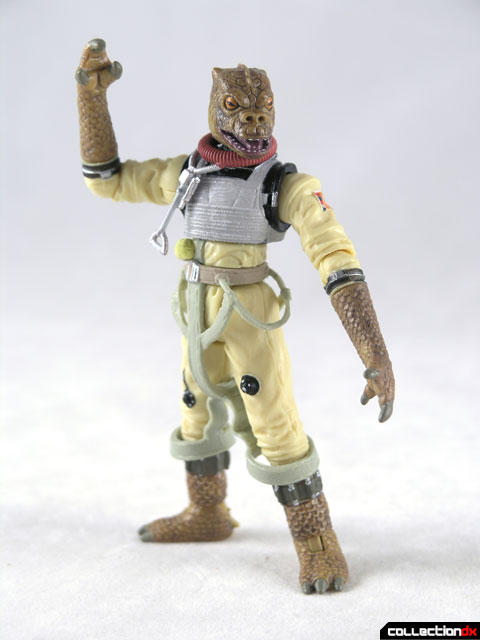 It's really too bad that Hasbro doesn't do all their figures like this. I'd gladly pay $10 a figure for improved articulation and detailing. 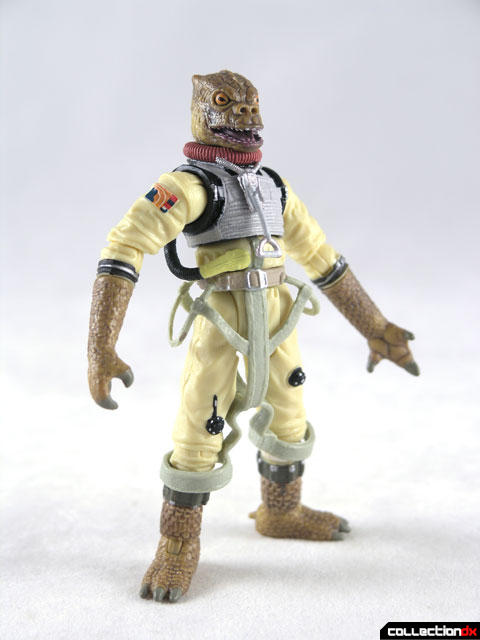 5 comments posted
Bossk was actually my

Bossk was actually my favorite of the Bounty Hunters. Even more than Boba Fett!

I was incredibly excited to see these come out 4 years ago, and it started me collecting Star Wars figures again after years of disinterest.

The rest of the 30th Anniversary Vintage Original Trilogy Collection from 2004 was great as well, and well worth picking up.

Within the last 4 years, Hasbro's made a bunch of really excellent super-articulated figures, well worth the price of purchase. The line Bossk is from (known as the Vintage line) was $10 each, and since 2004, they've been re-issuing most of them for $7 a piece, in the regular line, or in 2 or 3-packs.

Just like everything modern star wars figures, it gets very confusing to track all these "DX" figures down due to the different line names, large amount of releases, and misleading packages. If you'd like to know more, most any Star Wars figure site has all the names, pictures, and info you'll need to start hunting them down.

I was impressed to get such kid-proof AND highly detailed figures from Hasbro after the 90's brought tons of ugly, overpriced figures in the star wars line.

I've been buying a lot of them, so far I've gotten most of the major characters from the film. I'd say the best hands-down is HAN SOLO from STAR WARS, it is perhaps the best Star Wars figure EVER created. The worst being poor OLD OBI-WAN KENOBI (skip him! he was horrible!)

I really like it when you, Josh, and COLLECTIONDX in general, review items other than just robots. You tend to review things i would consider to be "DX" like these special SW guys, or the 1:6-Scale figures. It's a welcome change of pace from Power Rangers, Movie Transformers, and Revoltech (but really, who can live without Transformers, the Rangers, or Revoltech?) and I hope the trend continues! I've always used CDX as a "buying guide" not just for new releases, but to see which is the "best version" of a character, like Mazinger Z, Voltes, or in this case, Bossk.

Thanks. As someone who does have interests outside of robots (such as monsters), I sure like hearing that! I'd do more Star Wars or super hero stuff myself, but I just can't be buying that kind of stuff on top of my other hobbies. Money and space prohibits it!

He is definitely one of the best Star Wars figures of all time. To keep things fairly robotic, the vintage IG-88 figures is also pretty good and almost as pose-able.

I'm ready for a Zuckuss update! (