I'm guessing at this point that the Panda-Z line is done with. It's been several years since we've seen a new release of anything other than a key-chain featuring this guy. It's a bummer because Panda-Z was one of those things that satisfied a craving you didn't even know you had. A giant panda robot with a little panda pilot? Yes, please.

Panda-Z didn't seem to have the staying power, though. By the end of 2005 his products had pretty much disappeared from store shelves and websites, leaving only the animated DVDs that you can probably find in the clearance section of your local Best Buy store. It's a real disappointment because the toys were so great, starting with the original vinyl in 2003, then the chogokin in 2004, and wrapping up with Panda-Z Perfect in 2005. This is my first CDX review, and I'm proud to have the opportunity to start out with this guy. 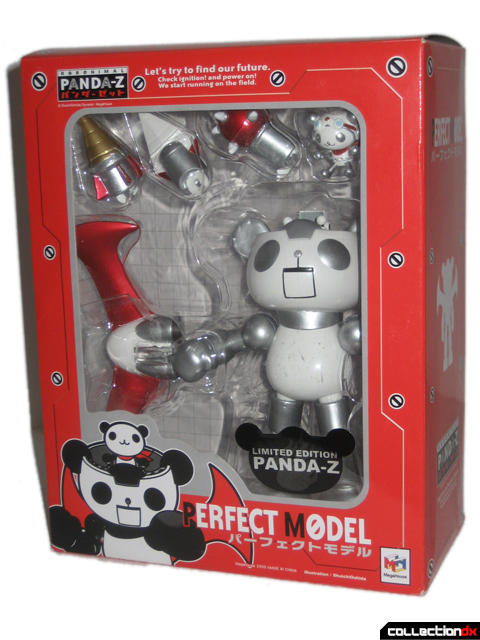 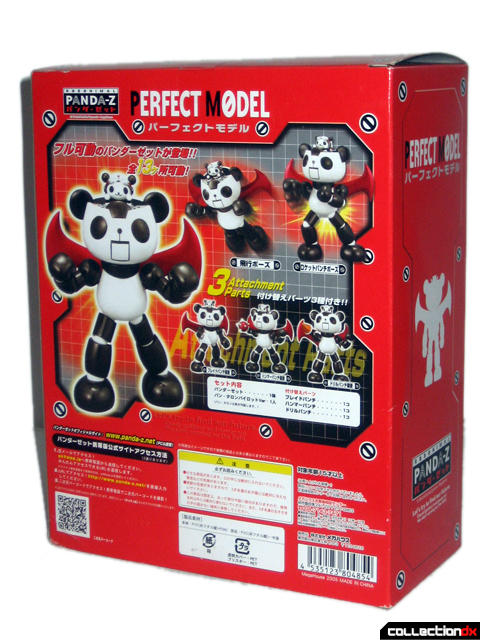 Panda-Z Perfect was released by Megahouse in three color schemes: standard black-and-white, metallic silver, and metallic red. An evil Skull Panda repaint was also advertised, though, as far as I know, was never released. Both the silver and red versions have a "limited edition" sticker on the box, but in my experience all three are equally hard to find. I picked this guy up at the Harajuku Kiddie Land store in Tokyo in November 2005. It was tough for me to choose between the silver and the red. Today the easy answer is that I should have got both, but at the time I was nearing the end of my trip and the limit of my budget so I went with the silver, as it was a bit more "robot-like". Or, "not-girly".

The toy comes in a basic box with a window showing the goods in their plastic tray. The top says "Let's try to find our future." Yes, let's! The back shows Panda-Z in some action packed poses and gives some specs about the toy. 13 points of articulation! 3 attachment parts! 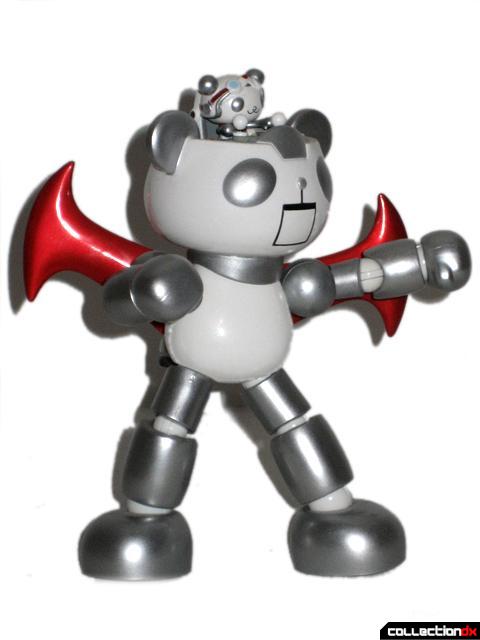 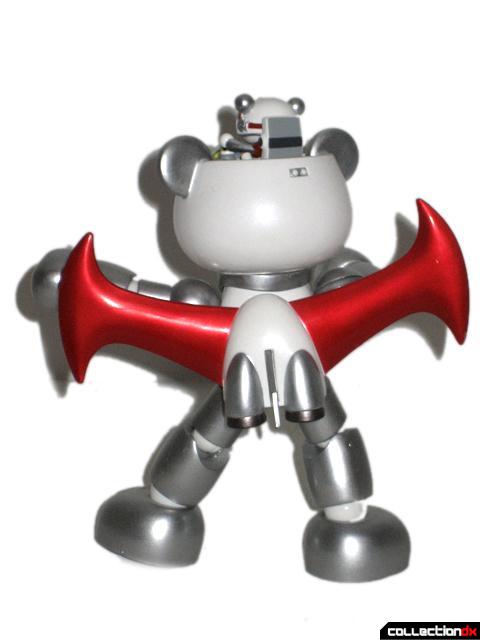 Out of the box, you can see that this figure's proportions are a little more anime-accurate than the previous toys. He stands at about 6 inches tall, including the pilot. The material is some kind of fairly soft plastic, probably PVC, with no sign of any metal content. He's awfully shiny; the metallic red on the scrander's wings is quite nice, similar to the chogokin version's. Articulation is the big draw here, and he does have the promised 13 points, though the range of movement on the leg joints is pretty limited. 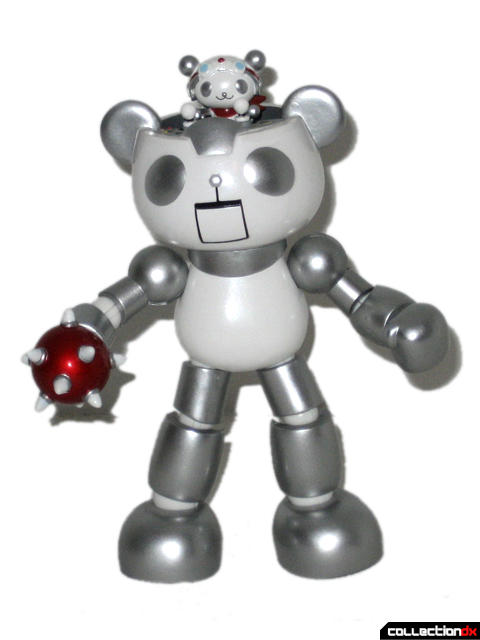 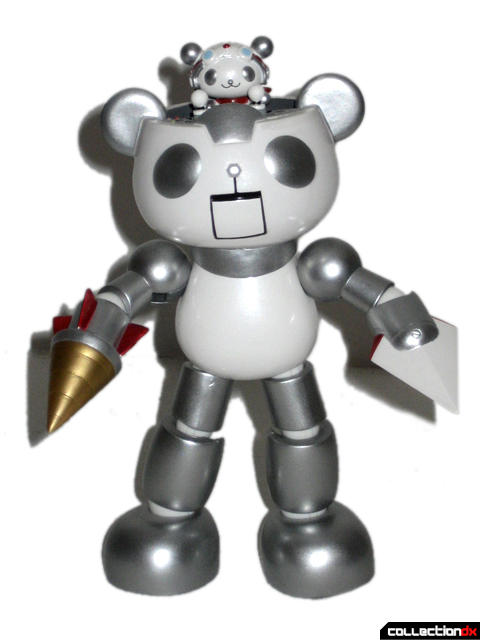 Either fist can be removed and replaced with one of the three attachment parts. There's Blade Punch fist, the Hammer Punch fist, and the Drill Punch fist. Does he use these in the show? I have to admit I never actually had the patience to sit through any of the DVDs. How about a rocket punch like the other Panda-Z toys feature? I guess nobody's perfect.

Panda-Z comes with a removable Pan-Taron pilot figure. There's nothing really attaching him to the cockpit, but he still manages to stay in well. Pan-Taron's head turns but otherwise has no articulation. (A Japanese-speaking friend of mine translates the pilot's name as "Pantaloon". This must be some kind of pun... "Panda-loon"?)
The wings are removable and attach to the back via a pair of pegs. Like previous Panda-Z toys, the Perfect model has nice details from the top of his cockpit head to the bottoms of his sculpted feet. 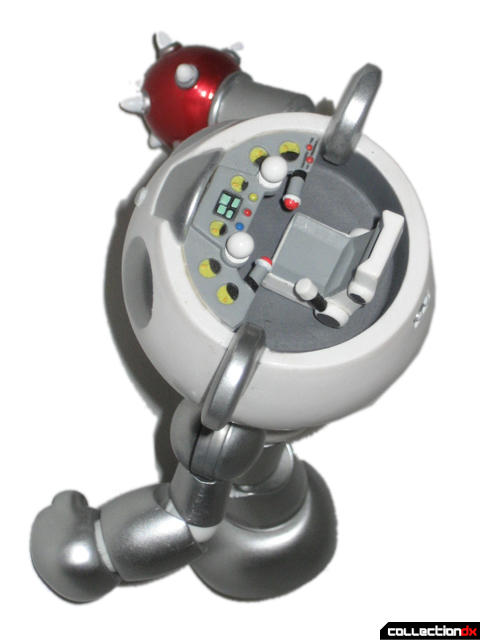 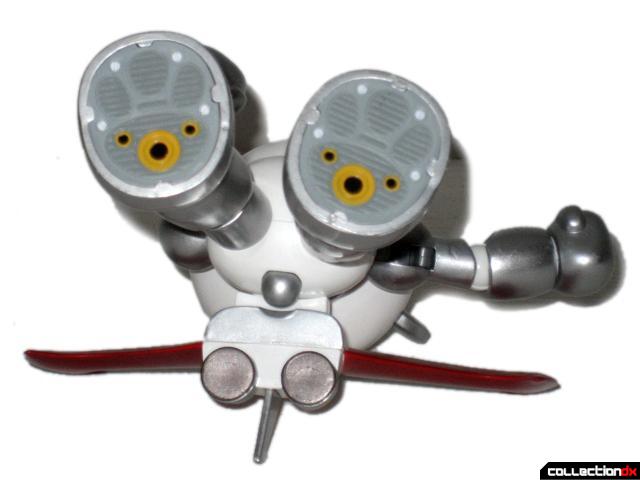 Oh, Panda-Z. The light that burns twice as bright burns for half as long, and you have burned so very, very brightly. 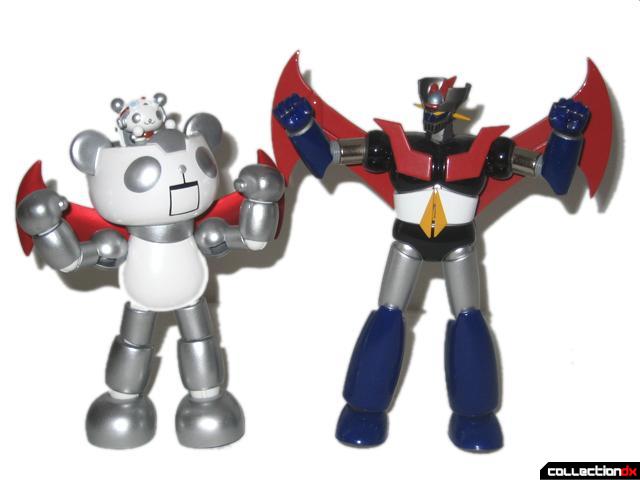 Panda Z is a great thing.
Nice review and photos, magicspoon.
I never got around to picking up the diecast version of this, and still will at some point.
This vinyl style fig seems cool though, and good to see they got in a lot of nice details, and paint highlights.

This one is surely awesome, especially the detailed cockpit.
But limited? Wow...

I've been reminded that there was also a gold repaint advertised for release in early 2006, but apparently never made it on the shelves.