Hello and welcome. I am Wallas, Poland's main toydude and I'll be your host today as together we take a look on the second release from the Microman Biomachine line. So sit back, relax and enjoy the presentation, as there is a lot to see today. Without any further delays, I'd like to introduce you to Microman Godoh and MachineStinger. For some reason I can't find the pictures of the toy boxed and unopened on my hard drive, so I'll skip this part for now and will add the pictures should I find them. If anyone's interested how the box works, you can always look up BM-1 Xeku, whose review has a very big chunk of the text dedicated to the packaging. 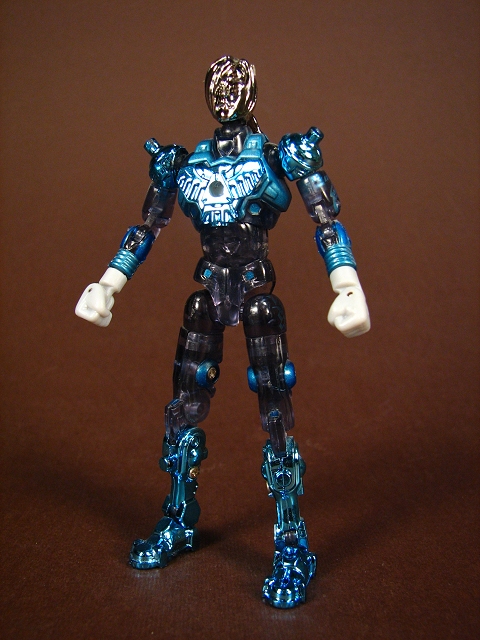 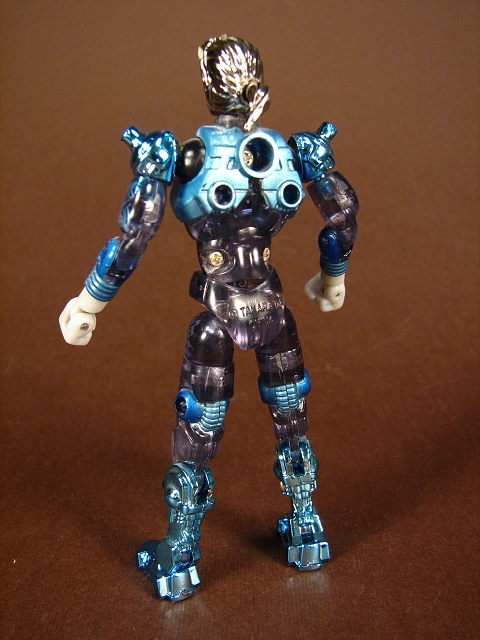 Godoh is a standard Biomachine type body, built with the use of dimmed clear plastic and covered with shiny blue chrome, which not only makes him look great, but also gives him a sort of sky/water theme. I have him for about a year now and there is still no sign of chrome wearing off from the figure, which is a good sign. 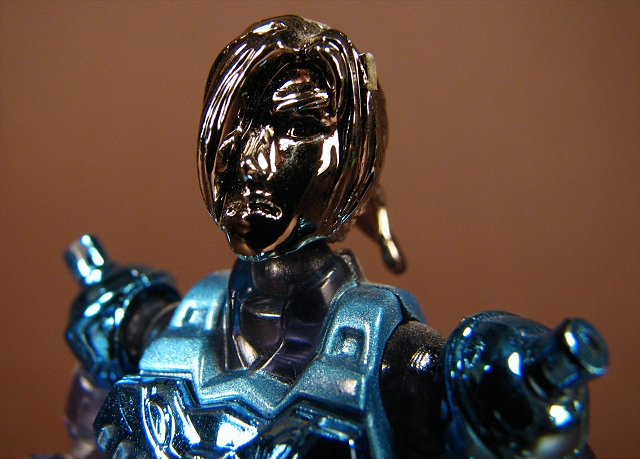 Like all Microman and Acroyear, Godoh's face is fully chromed and sports a nice sculpture of a young man who, having long hair falling on his face and that determined angry face, looks almost like a bishonen. According to tech specs I found on Xeku's promo DVD, he is the brain of the Biomachine team. Hmm, intelligent, blue-coloured... are sure this isn't Billy from Power Rangers 5 years later? Anyway, what really strikes me on this head is that Godoh has a ponytail that is a seperate piece attached on a swivel joint. I advise any owner of this set to superglue it there, though. It's the first part you'll see falling of. I couldn't find mine for three days once ^^ 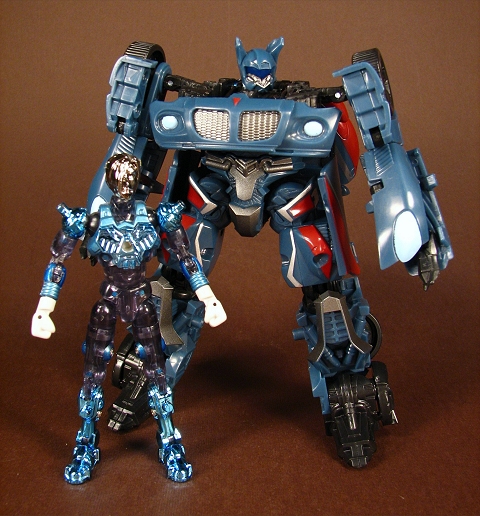 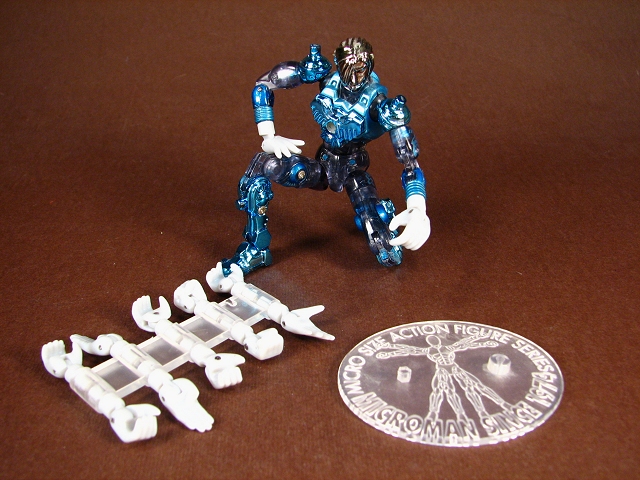 Godoh comes equipped with standard-issued Microman accessory pack, which includes a dual-port oval stand for poses and 5 extra pairs of PVC hand kept together nicely via plastic holder. One of the two most important features of Micromen is their extreme poseability that only Revoltech and Figma can compete with (and having recently started collecting Revoltech, I know what I'm saying). Godoh has 30 points of articulation, including dual feet, knee, arm and wrist joints, not to mention others like ball-mounted neck and torso. As a result, he can pull off some crazy and extreme poses that are sometimes hardly achievable for other action figures. Examples below. 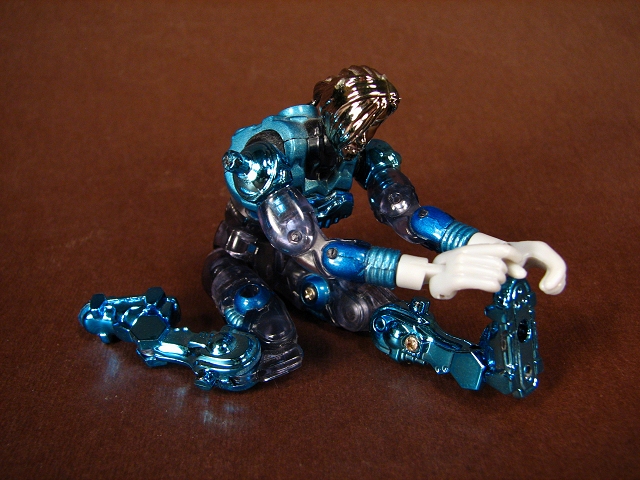 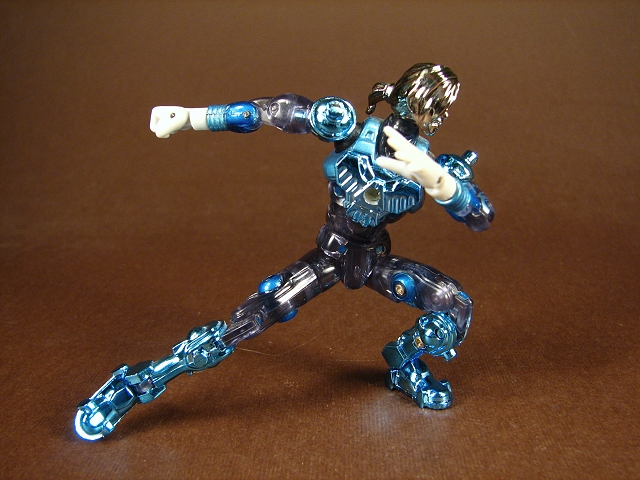 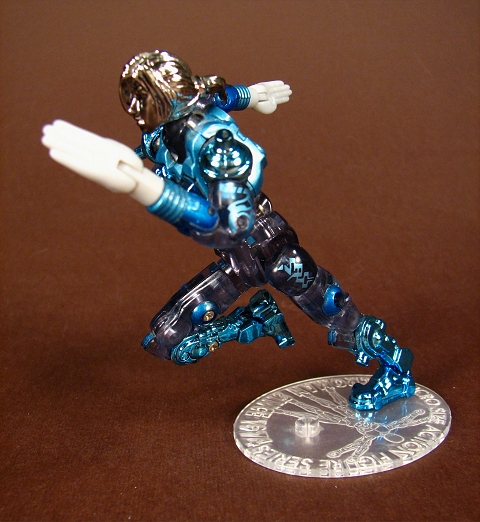 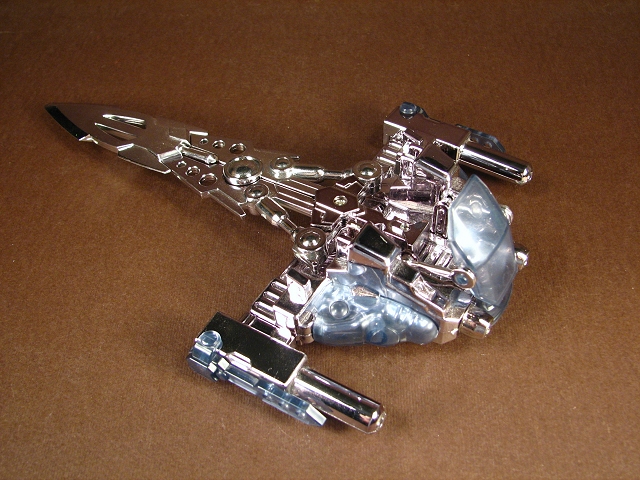 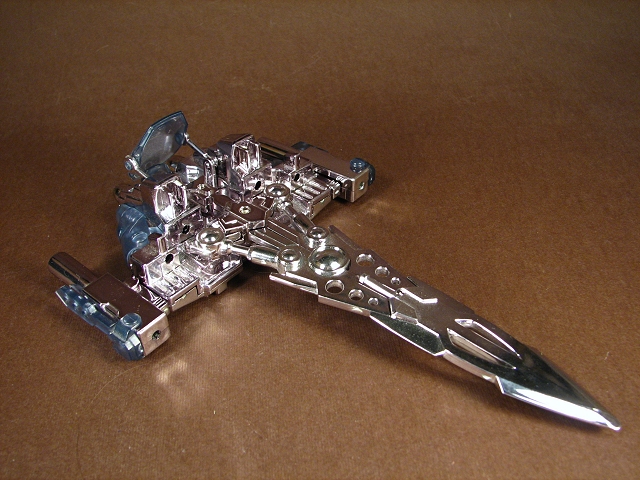 However, the main feature on this set is the MachineStinger, the titular Biomachine used by Godoh. From what I read, Stinger is a turbine-based hovercraft that is both ground and water-effective, including diving and generally remaining submerged (Godoh is a cyborg, so being surrounded by fluid is probably one of his least concerns). To fit it's purpose, it was stylised to look like a mechanical manta ray suited for carrying a pilot. What can I say? Like all Biomachines, this looks great. Being FULLY covered by chrome and being extremely detailed, this vehicle is just cool, especially since it's armed with two moderate-power laser cannons on sides and has dimmed clear plastic parts for finishing touches. The problem is, it's a finger print magnet, but that's not a very big price for its looks. 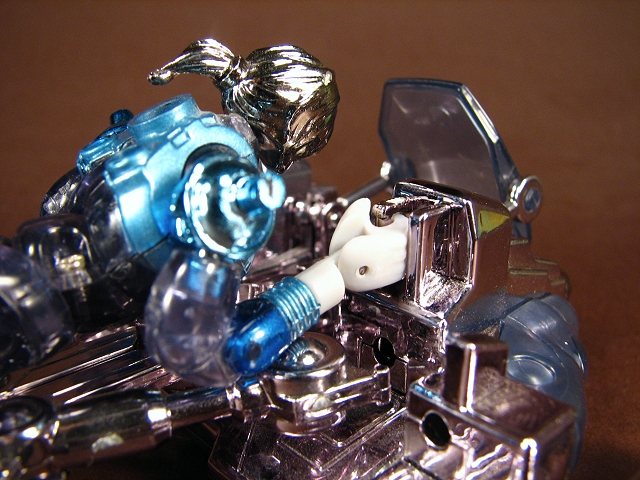 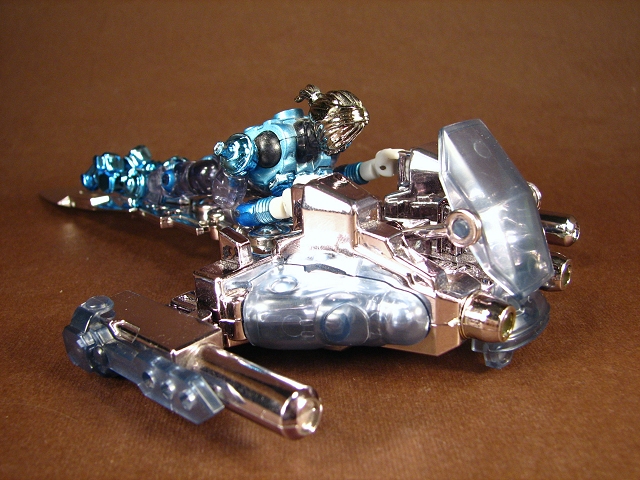 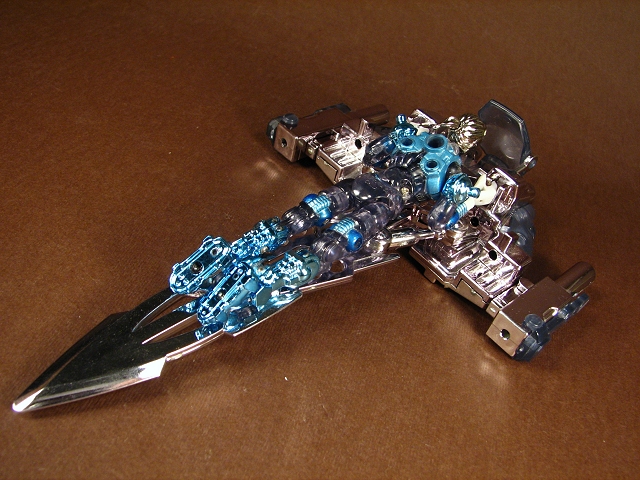 As I said, Biomachines are designed to have pilots and while controlling the unit, Godoh rests on the main part and the tail. He “plugs in” via two handles behind the the screen/shield. He has one set of hands ideal for the job and holds on to the vehicle firmly. Overall it looks nice and works, too. 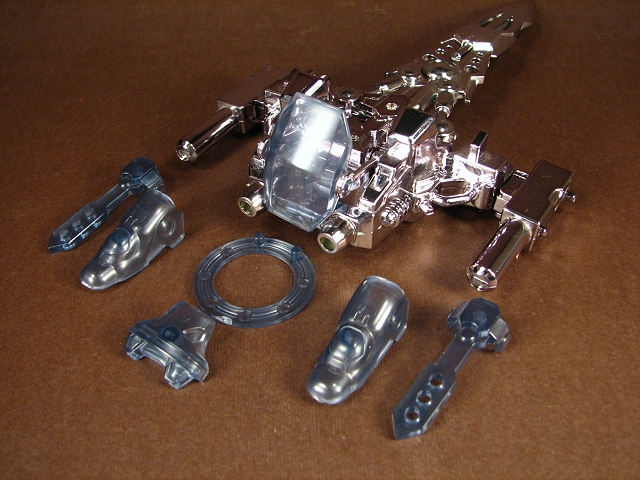 Just like Xeku's MachineMirror, MachineStinger can release some of its parts. For what purpose? Let's get Godoh and find out! 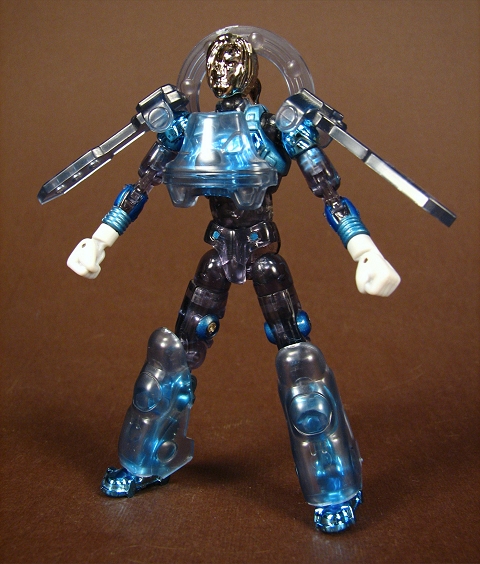 The aforementioned parts snap on to our Microman and form an additional armour for Godoh. This is officially known as BioTech mode and presumably powers the character up. I really like how each BioTech armour looks completely different. Godoh's seems to be designed as a light-weight type that doesn't affect the users mobility and speed (since Xeku's the only one who can ride his Biomachine with the armour on). I really like how the circular part previously attached to the unit's turbine snaps on the figure's back and forms a sort of a halo around his head, which makes it look like a battle-ready Saint. 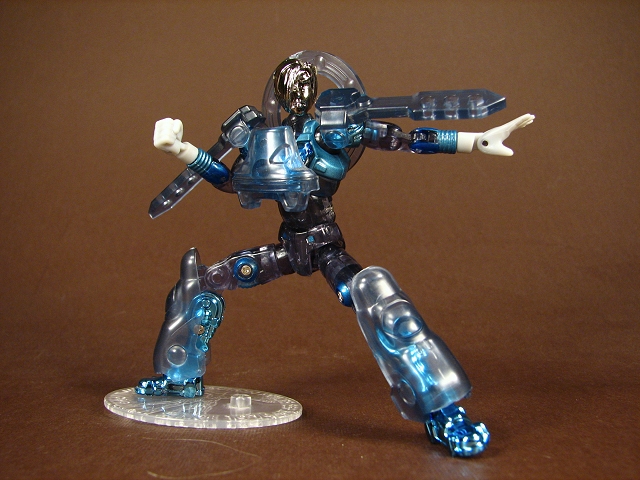 I really do like how the armour has almost no effect on the toy's poseability, in fact making many of the poses even cooler then they were before. 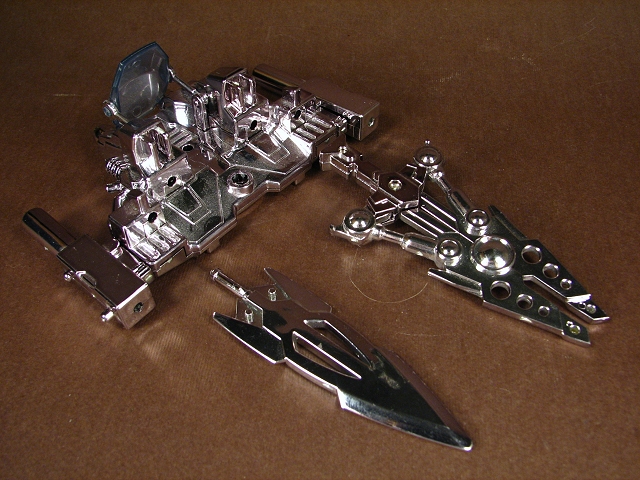 In Xeku's case, this should be the end of the review, but Godoh differs from other Biomicroman in that his Biomachine seems to release even more parts! 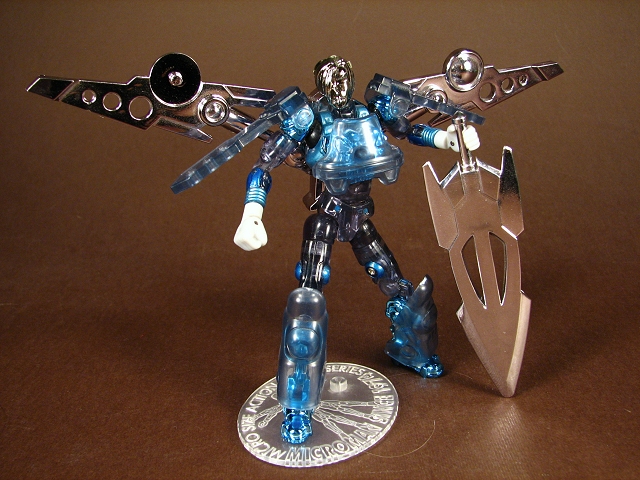 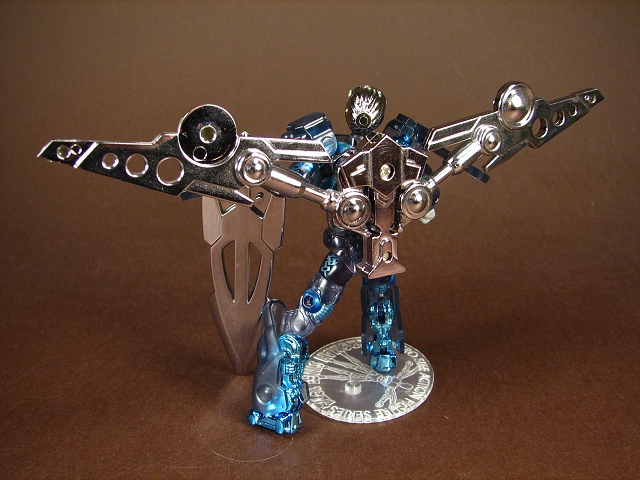 As a result, Godoh puts his hands on a huge sword and a flight pack, thus entering Super BioTech mode, which in my opinion is the best thing in the entire set. It looks awesome! 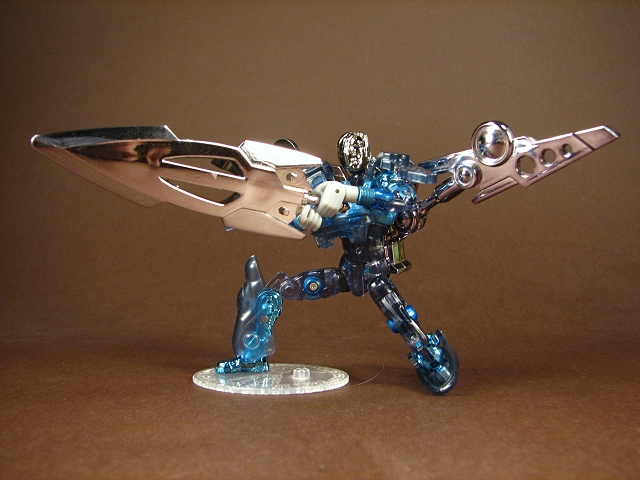 With the huge double-edged sword Godoh is finally armed and can execute cool battle poses, not to mention his foes. I find the stand quite useful while doing this. If anyone wonders what happened to the ponytail, worry not, it's not missing, I detached it after BioTech mode to avoid it falling off every time I move the toy. 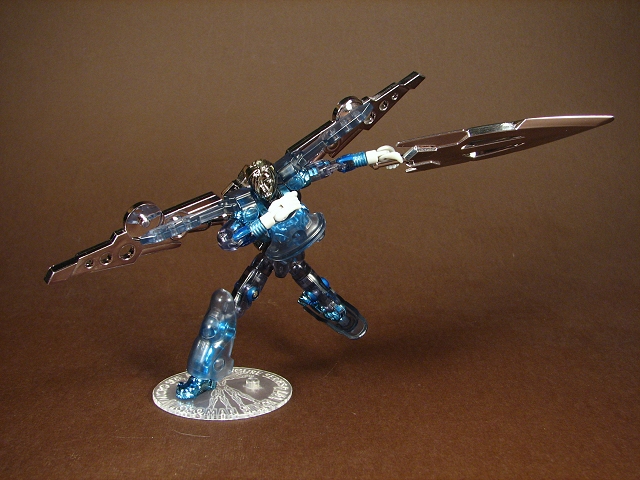 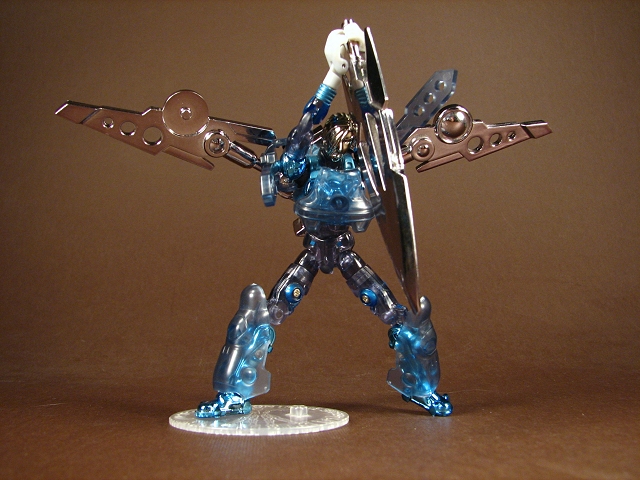 Super Biotech is a great feature, but it seems that there is more than that to it. You see, after you detach the cannons from the Stinger it becomes visible that the pegs on them match the small holes on the shoulderguards. The instruction remains silent on this, but it all fits together just to well to be accidental and reminds me of the easter eggs left by creators in games and on DVDs. 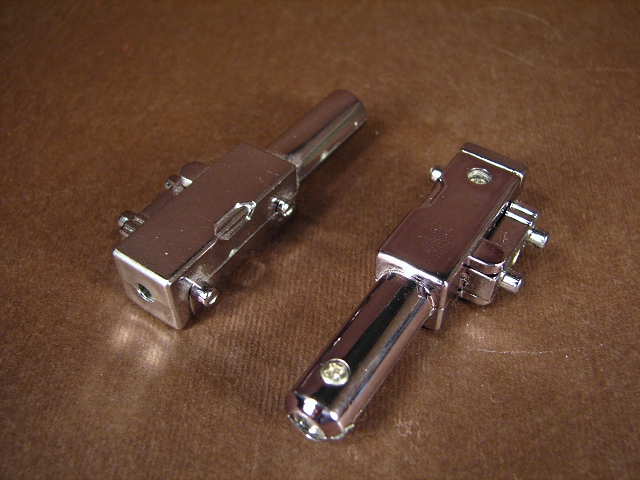 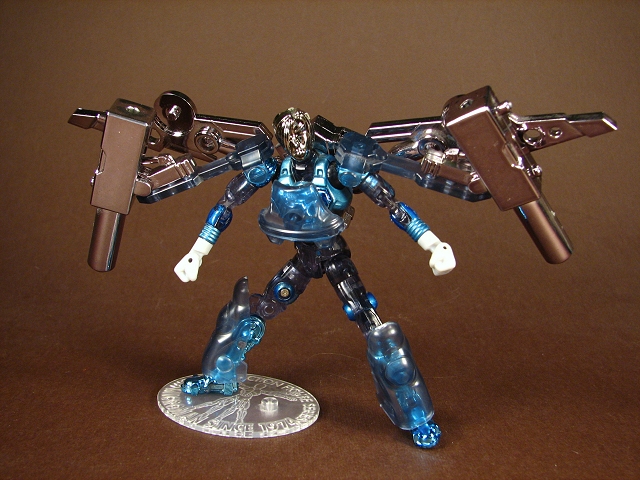 And so, now Godoh has both a blade and some firepower to use, which unexpectedly makes him surprisingly well-armed. The nice thing about the cannons is that you can mount them however you want, as long as at least one peg stays attached. To make the poses more credible, the cannons have both additional hinges that allow them to swing out while attached to Godoh and even there you will find some details. Wow. 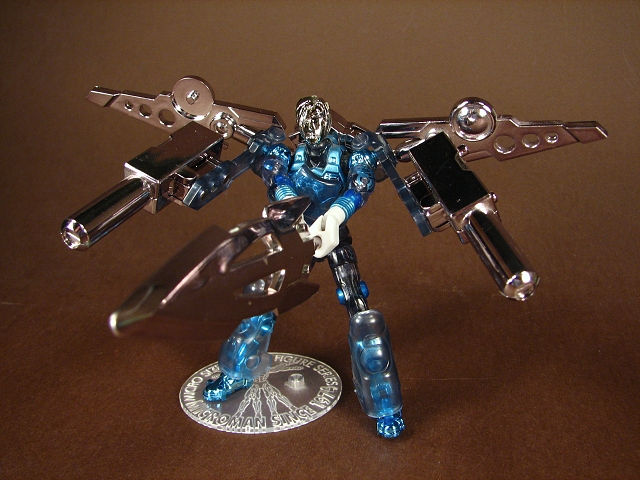 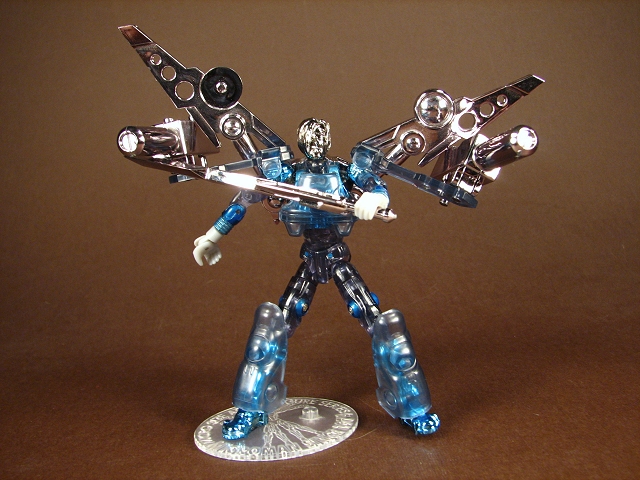 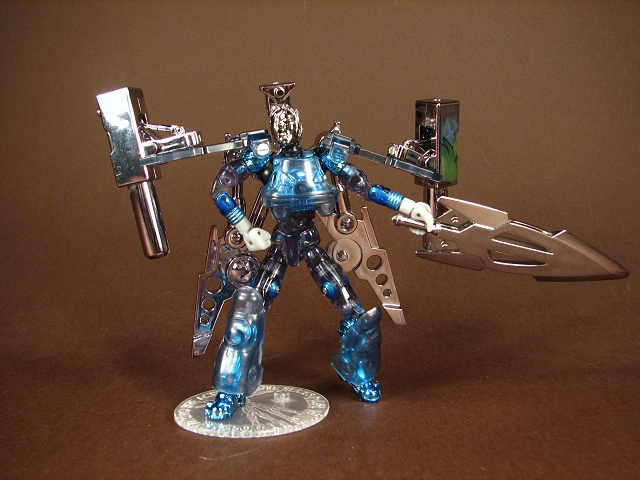 I also found that if you want to, you can flip the wings down to form sort of a cape, but that's just my fiddling with the parts. I wonder what would happen if I plugged in some parts from other Biomicromen... 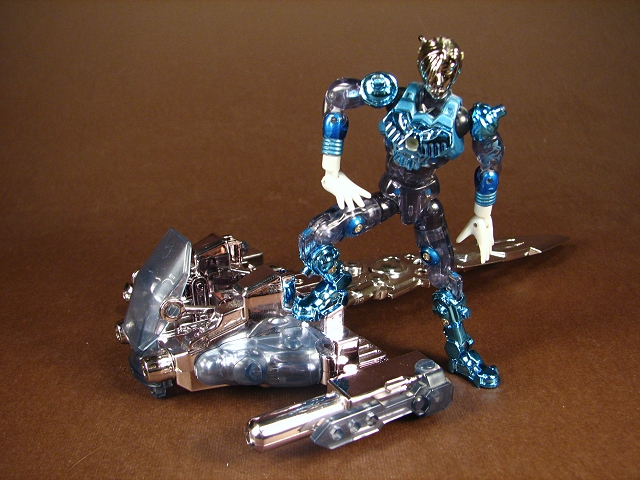 To sum things up, Godoh proved to be a great toy that has many interesting features that come out once you give this guy a bit of attention. If you dig that kind of action figures, you'll love him. And, he's still easily reachable via eBay :)

It's nice to see some Micromen reviews on the site. Although I don't have this particular piece, I did pick up a large number of Micromen of that era (and newer). Personally, although they are very nice looking pieces, and extremely well articulated, I found the quality control pretty lacking. Even buying from multiple vendors, I often received figures either with broken parts (the figures' joints usually, but sometimes accessories) or with bad casting which would prevent the accessories from staying together. I actually resorted to just leaving them in their packages rather than risk opening them to try putting them together. Have you encountered these issues at all or have I been just extremely unlucky?

As far as I know, Takara has any new Micromen on hold. I'm hoping they use the time to work out the kinks in manufacturing. Between these newer Micromen and the Palisades Micronauts fiasco, I'm sticking with the vintage stuff for now.

you forgot the shfiguarts from bandai... they are extremely posable

Oh yeah, I saw these things a few times. True enough. I often wonder what was the first real Hyper-poseable toyline in history... Micro Action Force type toys are around just over 6 years, Amdriver is also quite new...hmmm...

me either, not sure but i'd like to think that the microman figures are earlier in the production, but for recency shouhaku henshin were posable but limited with all the diecast around them

Will you be covering the other biomachine sets and the Biosuit? I'm a huge microman fan, and these are among the best modern MM toys released.

I'm not sure I would use Amdriver in the same breath though. While similar in scale, the AD toys are pretty miserable when it comes to articulation and overall quality.

As for the roots of the hyper-articulated figure, look no further than the roots of Microman itself, the 8" GI Joe, and then, Henshin Cyborg figures. From there, Microman itself was pretty revolutionary, but the 3-3/4" American Joes were extremely well articulated for their time. If you're not familiar with the whole story, Microforever.com is extremely comprehensive.

Sure I am covering the rest of the team, that's my main objective now :) I also intend to review these guys on my YT channel and Xeku is already there.

In terms of my agenda I want to finish off my Microman collection (three more reviews to go unless I decide to buy something), two or three GI Joes and few TFs, like Encore Omega Supreme or my Binaltechs.

But that's the future to come :)