Once upon a time, a few years back, I had it in my head that it'd be a pinky-keen thing to try and collect all the different vehicles featured throughout the various iterations of Gundam. Thankfully, I gave up before any money was spent. But I did my research for a good while, and when I looked into the Fanfan, I discovered this absolutely fantastic toy. 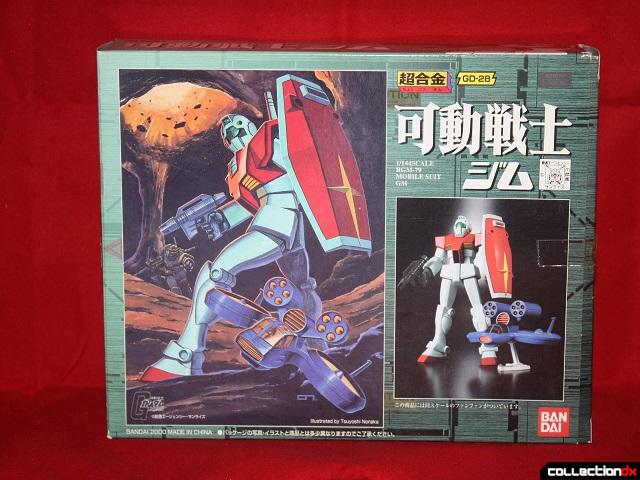 Besides being a GM toy that I hadn't seen before, I wasn't sure what I was looking at. The box looks nice at least, with a mix of hand drawn art and an actual toy photo. Serves the same purpose as art and a window, but it's still nice, unique even. And the art is particular, depicting a GM in action with a Fanfan inside Jaburo, during the big Zeon assault. 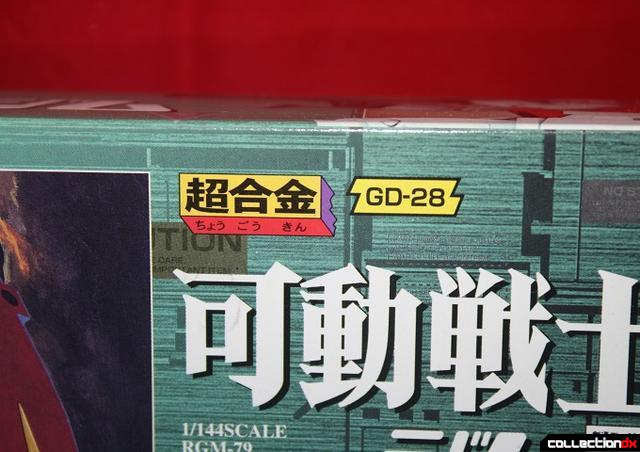 This figure is part of Bandai's Chogokin line, and thus has a number of GD-28. This signifies that the toy came out between the late 90's and early 2000's. After GD-99, Bandai switched to GE numbers. 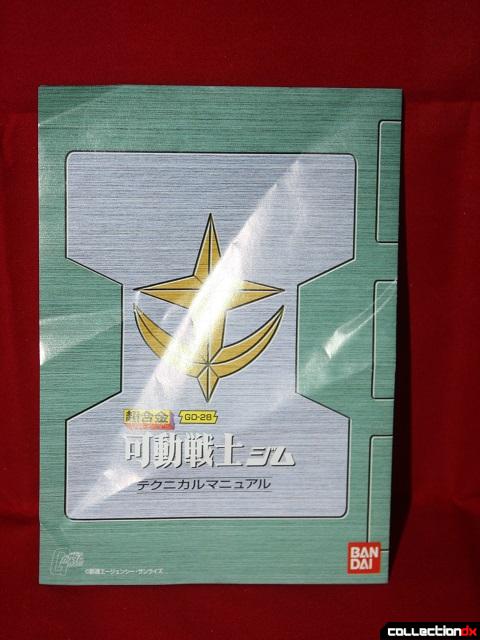 Points for the instruction booklet looking like a pilot's manual. On the inside is a good profile shot showing off the accessories and articulation. 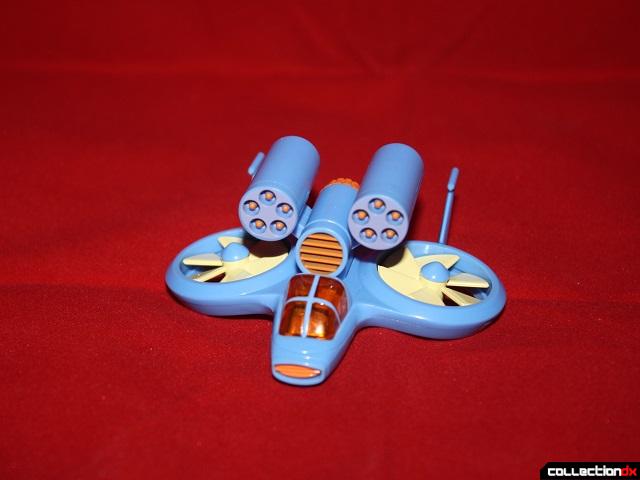 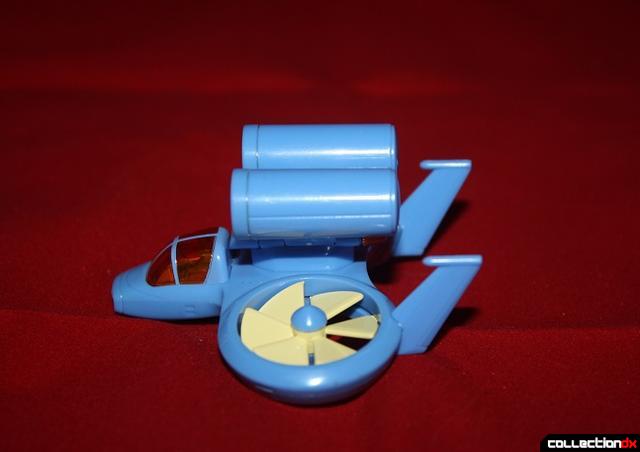 So let's start with the lesser attraction, the Fanfan. There's not much to it, just a Federation fan jet with two fan jets and two five-barrel missile launchers. It's all plastic, but doesn't feel like a cheap afterthought. I think the coloring speaks to that. The fans do spin, but they're hard to flick unless you've got tiny fingers. Better to use compressed air or your lungs. 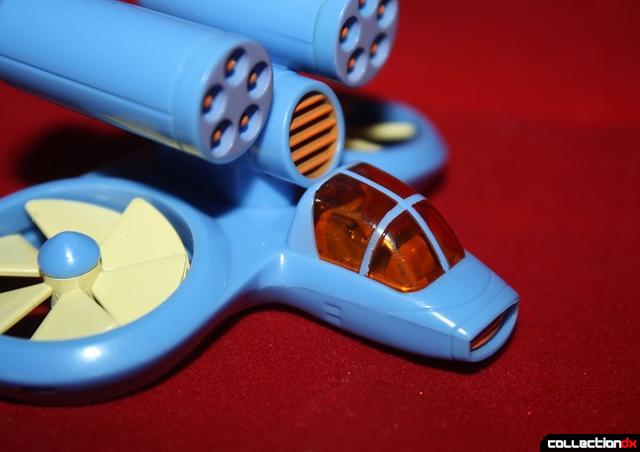 Why, I do believe there's even a tiny little Lt. Woody in the cockpit. 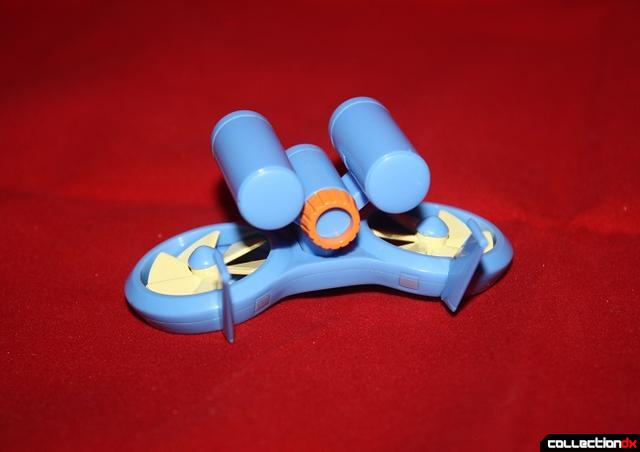 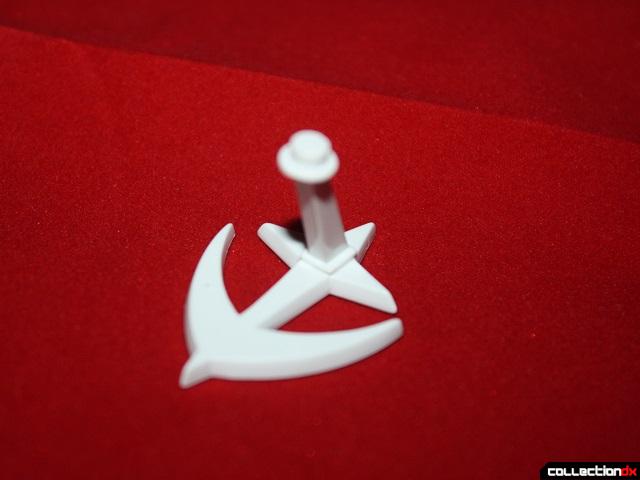 The two bits of assembly are attaching the rear fins, which come on a sprue, and putting together the stand (two pieces) that's modeled after a Federation cross. 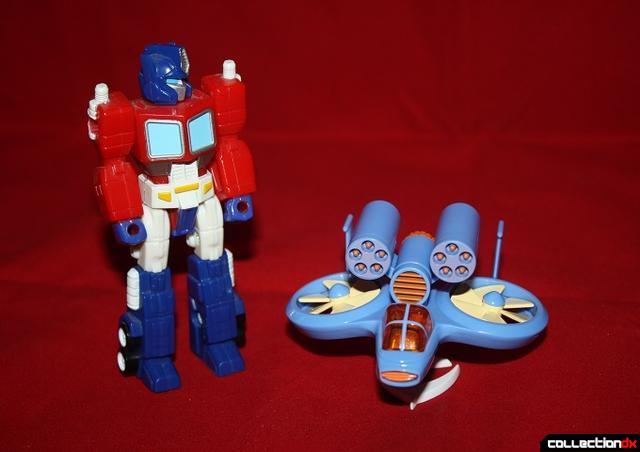 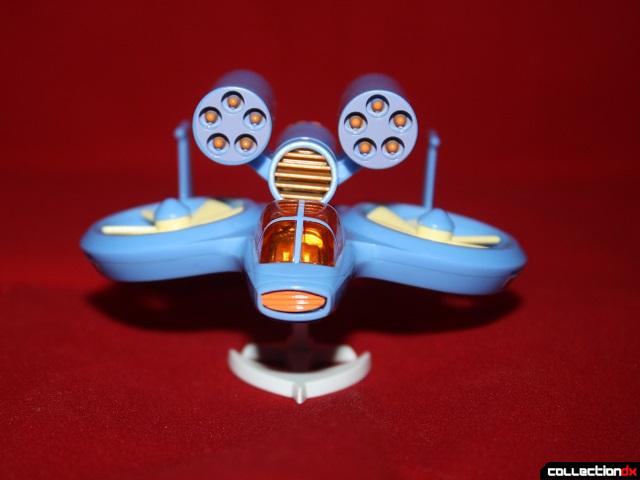 Next to AM Optimus for comparison, this little vehicle comes about an inch off the ground and isn't much longer. 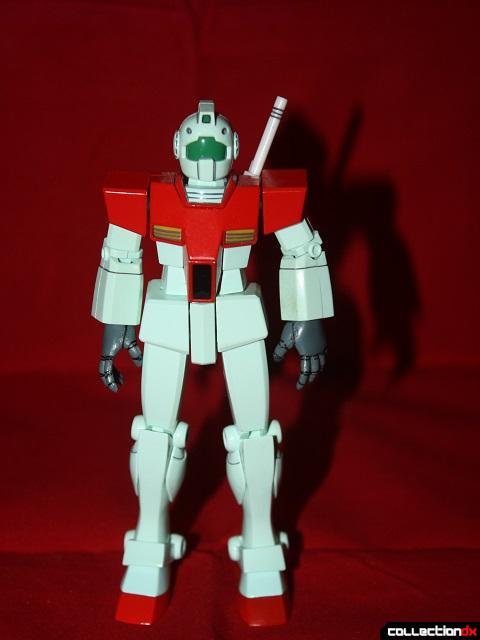 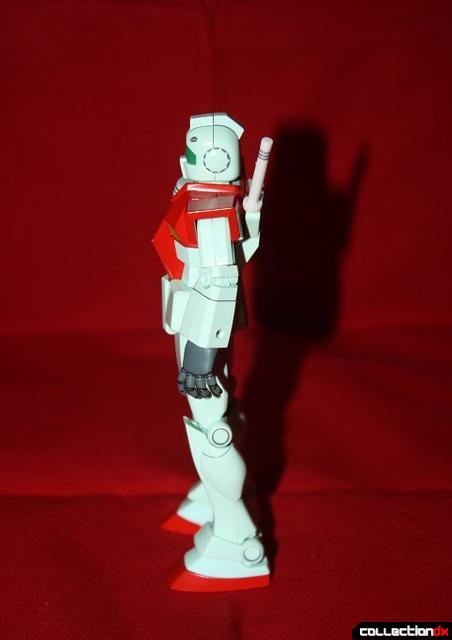 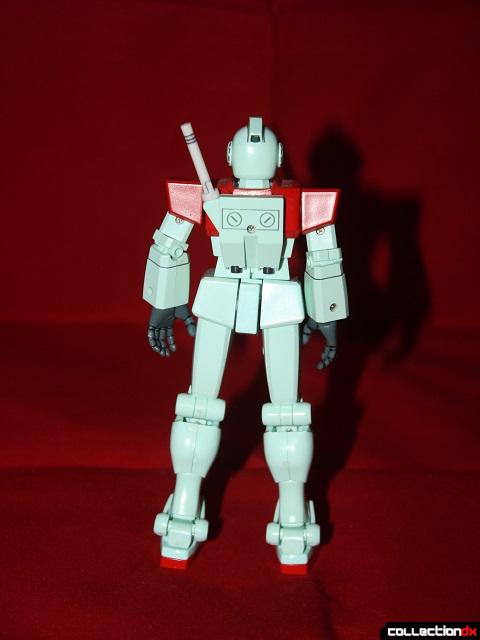 And now the meat. Coming in at over 5 inches and just barely taller than the FIX version, two things pop about this GM. First, the design looks so animation-accurate. I mean literally, this mobile suit looks like it walked right off the TV screen back in 1979. And that's pretty cool since most Gundam toys have more of a modern polish. The shapes and panels are so...clean, flat, and smooth. So there's no need for a bunch of panel lines. The second may be hard to discern due to the brightness of my pics in conjunction with one's eyes and display. But all of the white body parts aren't white so much as a kind of off-white, gray, sort of blue color. Again, animation accurate. This was so surprising to me, because even the photos on the box and in the manual make all those parts look white. Same for pictures on the internet. And I've never heard of toys "bluing", so this is a funky surprise and apparent intentional design choice. 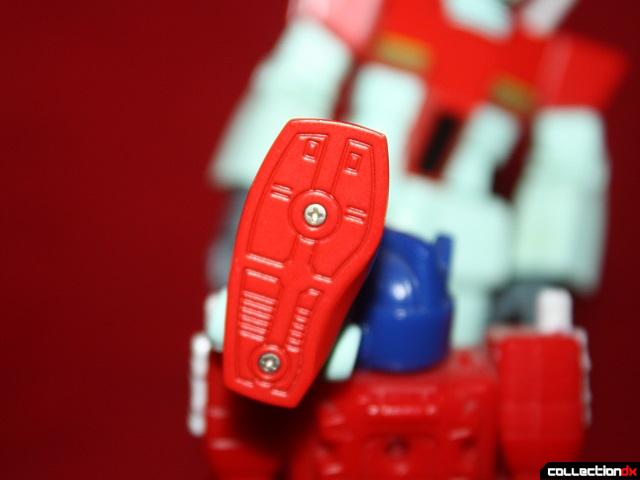 Check out those flat feet. 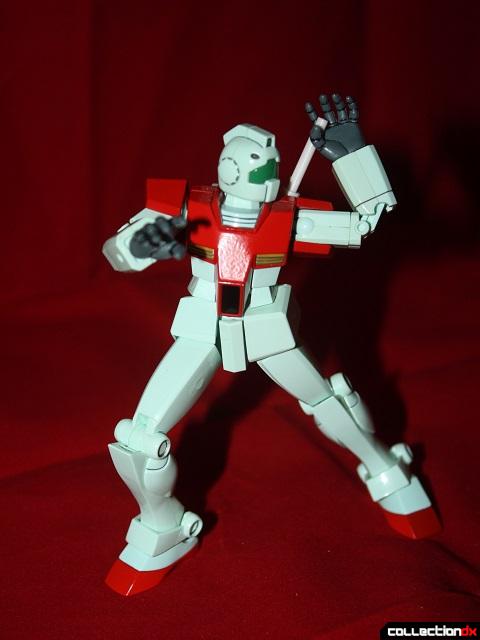 Articulation is the name of the game, and this GM delivers. Definitely blows the MSIA out of the water, and it's hardier than the FIX, but it's not too far away from Robot Spirits territory. The ankles are ball-jointed and share a spring with the ankle covers. The calf armor is spring-loaded too. The knees are pin-hinged but have the kind of extension you normally only get with double-joints. No swivels, but the hips are also ball jointed and do everything you could want except a super kick, because the hip skirt is only segmented into three pieces, both sides and the center.

The waist doesn't rotate, but there's an ab crunch that works forward, backward, and side to side. The sides are also jointed, making them amenable to however the chest and hips are orientated. As you can see, the shoulders are ball joints and the elbows double-joints. The shoulders can actually extend out of the body far enough for either arm to touch the opposite side. And the forearms are extendable, which allows the interior joint to be hidden in less extreme poses. The hands rotate at the wrist, mounted on a ball peg and switchable. The head is also mounted on a ball joint with a sort of spring effect. Not a problem, but it makes for a cool mechanical sound, like something metal is moving. All of this comes together with great stability, strong joints, solid paint, and a little heft courtesy of the metal feet and chest. 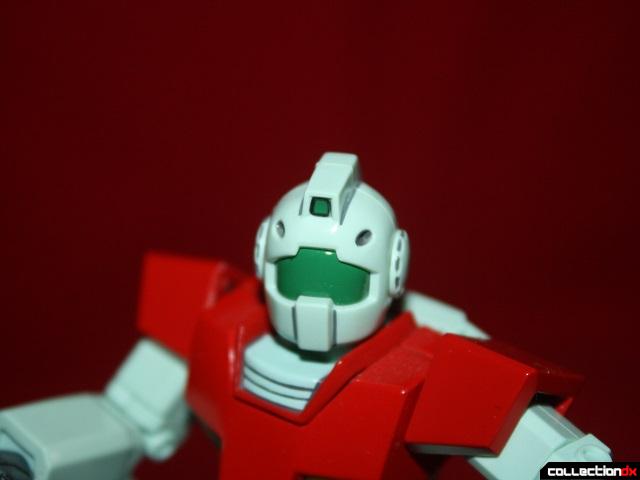 For weapons, the usual suspects are in play. Vulcan cannons x 2? Check. 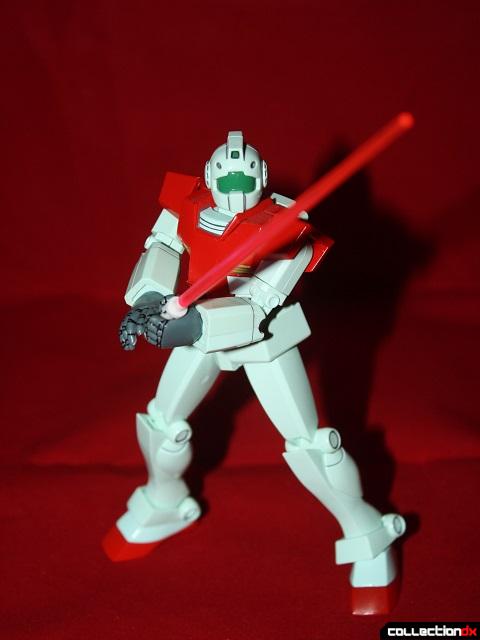 Beam saber x 1? Check. Among the four sets of hands are two for this. 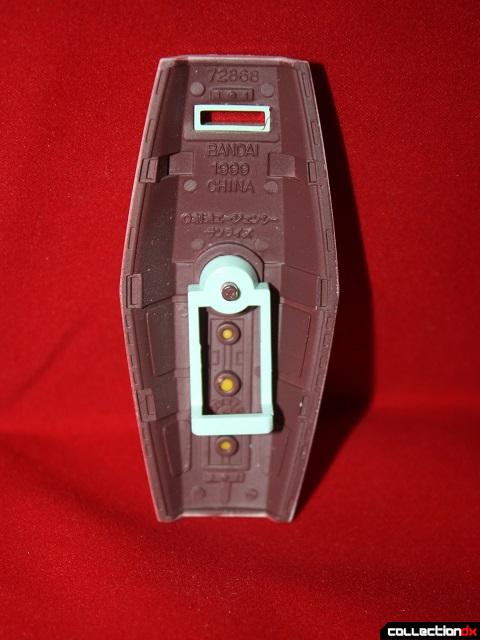 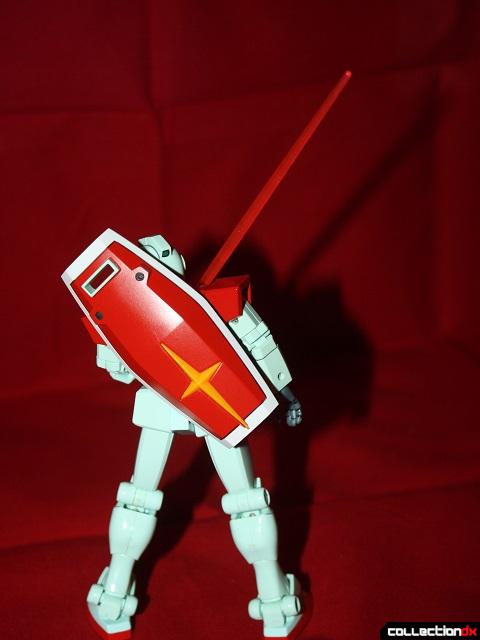 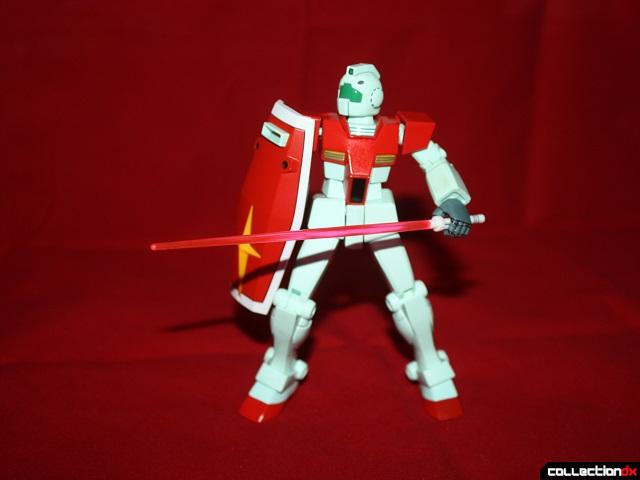 Shield x 1? Check. This one is very static, but it mounts on the back perfectly, and the gun/shield hands hold it well. 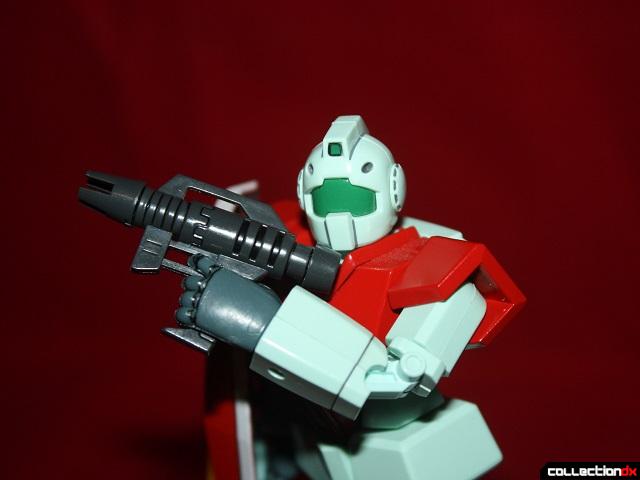 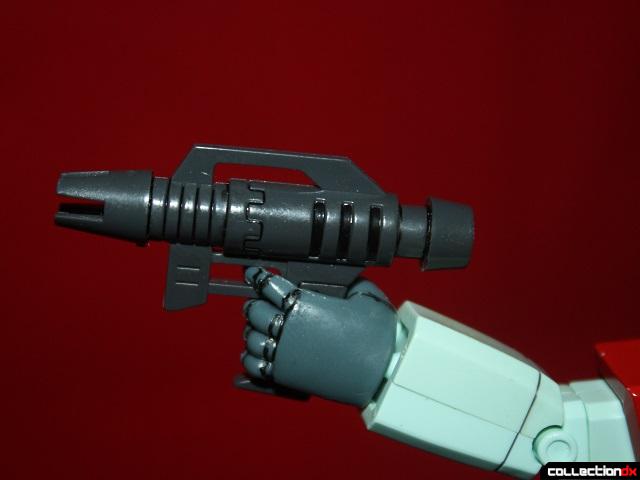 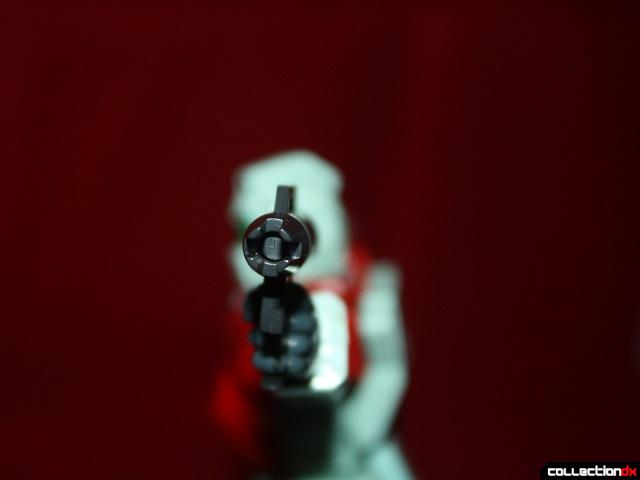 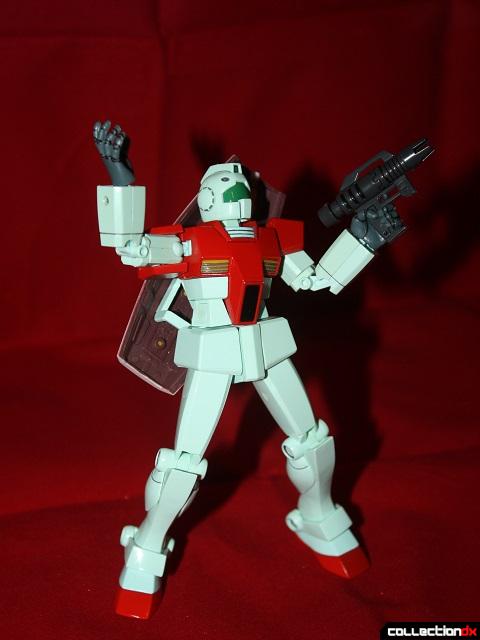 Beam spray gun x 1? Check. This thing is smooth and probably shouldn't look so good, but it does. 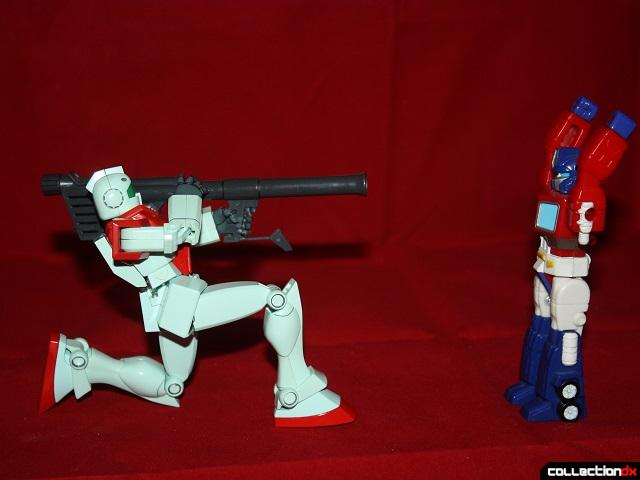 Hyper bazooka x 1? Chec..- actually that's new out of the GM toys I have, and pretty cool. Nifty that none of them come with all the same weapons. 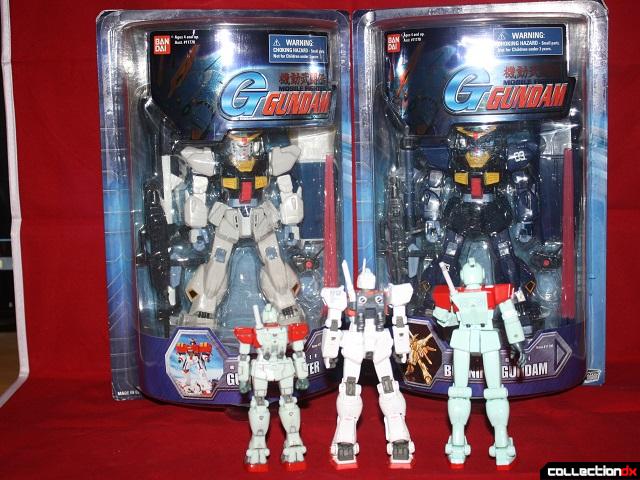 So, what say you, oh Gods of Gundam? Who is the bestest of them all? 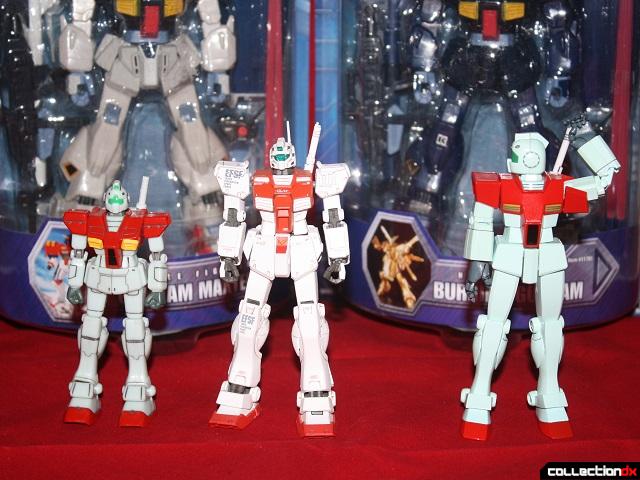 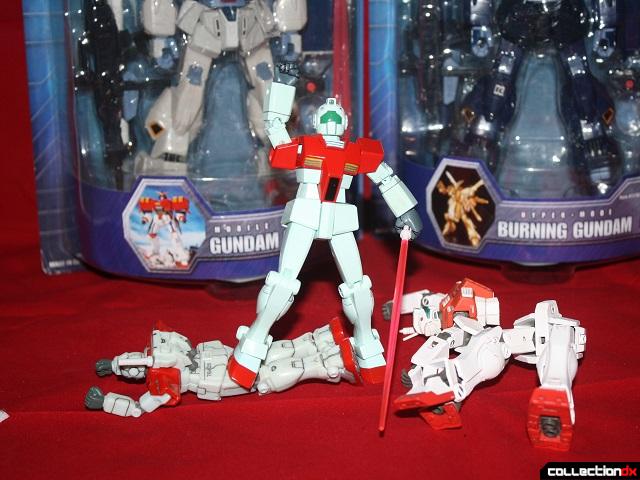 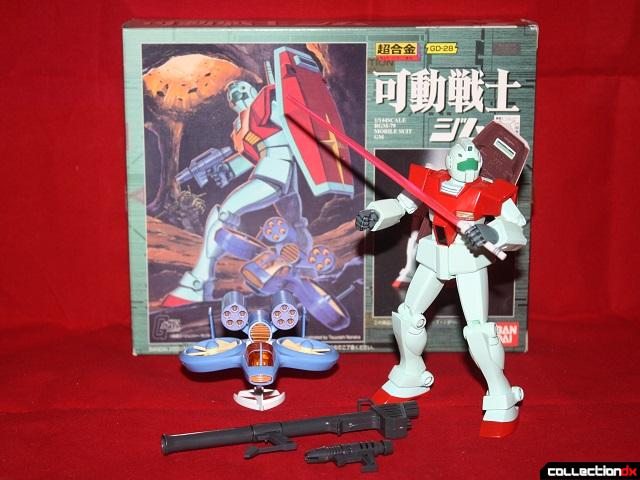 But seriously, this GM rocks and by far is my favorite RGM-79. It's total fun, has a cool retro look, goes the extra mile to hide most of its inner toy workings, has GOOD metal content, the best set of weapons, and it even comes with an in-scale Fanfan. The only cons are that these aren't that common, and they're not cheap. I lucked out and got it for $30 MISB, cheaper than my MSIA ($50) and FIX ($70). But if you're a completest, big MSG nut, or love the GM, you owe it to yourself to try and find one.

15 comments posted
I spy some unreleased 7.5"

I spy some unreleased 7.5" Bandai of America RX-178 Gundam Mk-II figures in the background!

Yeah, I scored those Arch Enemy figures a few years ago. Never been opened and I'm not planning to, since I haven't seen any before or since, except in that one ToyFare article from back before the line was cancelled.

Duuuuuuuuuuuude... why are we not getting a huge elaborate pictorial review of these guys, with 1000 photos of whatever can be seen through the packaging, haha.

I don't think that would cut it, Everyone wants to see them out and about. It's really hard not to open them up, but I'm just unsure of how rare these really are. Again, I'd never seen them in person before I found these, and I haven't seen any since. I'm not saying they're my "get rich quick" scheme, but who knows. Maybe some day someone will make me an offer I can't refuse.

Plus, I'd feel kind of weird having them just for me when they aren't really available to anyone else. I know that probably sounds strange, but I almost feel like they should be in a Gundam/toy museum or something. Assuming again that they are rare. For all we know, Bandai might have a bunch of them stashed in a vault somewhere just because.

...why do the Gundam Mk. IIs have "G-Gundam" branding?

My guess? A few of each Mk. II, possibly prototypes, were actually manufactured before the word came down that the line was cancelled, but also before the proper packaging was made. So someone decided to chuck them onto leftover G-Gundam deluxe bubble cards and send them out anyways. These were actually found at a Toys'R US.

I think the easiest explanation on why they are in G-Gundam packaging is that is what was airing on Cartoon Network at the time. Those figures were released in two different lines, the first was "Gundam Arch Enemy" which is pretty self-explanatory; the figures were RX-78, Char's Gellgoog, Wing Zero, Tallgeese III, Aile Strike (but I don't think the Aile Strike's "enemy" counterpart was released.) The Arch Enemy series came out in 2002, G-Gundam started airing on CN in the middle of 2002 and that's when the 7.5 line was repackaged with the G-Gundam label and several G-Fighters were released. I think Bandai was also trying to get Zeta Gundam on the air at the time since the first Gundam series aired in 2001 and Zeta followed chronologically (the RX-178 is from that series.) If I had to guess, since the RX-178 is in both AEUG (good guys) and Titans (bad guys) colors, it was going to be released in the Arch Enemy line but when G-Gundam got the go-ahead, it was shoehorned into that line instead.

They weren't super-rare at the time, you could walk into any Toys-R-Us and find them, I got both Char's Gelgoog and the Damaged version of Shining Gundam on clearance at TRU, and getting stuff on clearance there is a pretty rare event. However, they're pretty expensive on the secondary market now, packaged figures sell on average between $80-$100, because they're high quality figures, fit a pretty specific niche and are fairly rare now.

I wonder if there's a booklet or something in there for them. Toy catalog? Instructions? Something unique than just the figures.

FUN FACT: If you want to see the cancelled Gundam toys, messing deeply into the internet wayback machine on www.Gundamofficial.com can net you all the images. They've got good stuff like a 4.5" battle-scarred wing gundam, 4.5" battle-scarred master gundam, and a new 4.5" Gundam Mk. 3 figure in all it's yogurty-colored goodness. Yes, we were going to get a figure of this in America: http://gundam.wikia.com/wiki/MSF-007_Gundam_Mk-III

Without opening them, I can make out some of the accessories: two beam sabers, one beam rifle, one hyper bazooka, one shield, one gun pod. Not sure if they've got alternate hands. If there's any paperwork, it's probably between the bottom of the bubble and tray. But I wouldn't be surprised if they just came with instructions for the G-Fighters depicted on the cards.

That is really cool! I wouldn't mind tracking that down to add to the 'ol GM collection (which I didn't originally mean to turn into a full collection, honestly). Like you; I love that it looks like it jumped right off the animation (thin legs and everything). Best part are the hands! They usually make them a little small in most releases (save for models) but these, once again, are nicely sized and match the old animation model.

As for MSiA: You really gotta try the 2.0 version, at some point! Blows the first version out of the water (though it doesn't match this one in the looks department).

That's the second time you've brought that up I think. I will look into it. It's the one that comes with the Space Launch, right?

Yes, that's the one! Here's a photo of 'em next to a HumAble Model figure:

It's from a review I did on the HumAble Models, if you're interested in those.

They're not models, even though it's in the name. Just VERY articulated figures.

Great review and very cool. And points for actually having some good Banpresto toys that came out of a machine. In my experience, they're very hit or miss, and I've always had the misses.

Thanks! I honestly haven't run into a bad Banpresto item yet. Perhaps it's just because I have so little from them; it's a small sample size to judge from. So far those HumAble models and their SCM EX lines are both pretty dang cool.

...I used to see these GMs, and their Gundam and Zaku equivalents, a lot a few years ago in Japan. I hadn't realised they were this nice. At the time, I had *read* more about Gundam than *seen* it, so though I loved the universe my knowledge of the actual series, especially the first, was a bit lacking otherwise I'd have picked one up because GMs need our love. Also, to be less explodely.