Where the bloody hell am I? This isn't The Website of Doom! This looks like... CollectionDX! I must have crossed over through some cross-spatial tear... Either that or I'm taking part in Super Review Wars DX!

So hi, guys! Sharp-O here, for the very first time, to bring you a little bit of Mint in Box on CollectionDX! 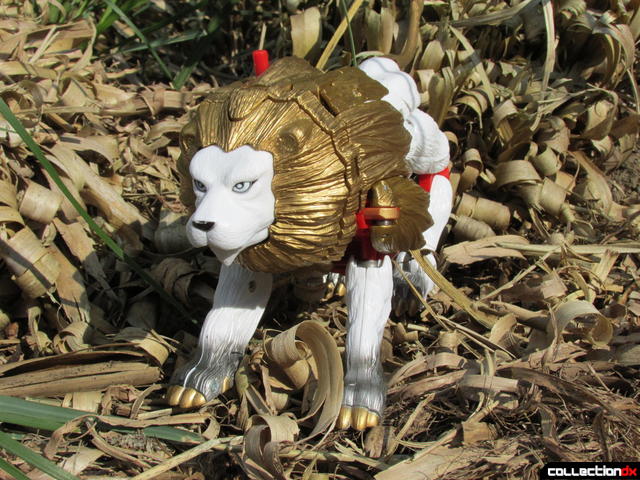 Today we'll be looking at the king of the jungle, Lio Convoy! Hailing from glorious Nippon and their sequel to the smash-hit Beast Wars, Lio Convoy is the Optimus Primal of Beast Wars II, only he's a lion.He's your typical stoic Prime/Convoy character from what I've seen of him but it's not his character that's so interesting, no-no, it's his origins and how he turned up in my hands. But before that, let's take a gander at the hirsute hero! 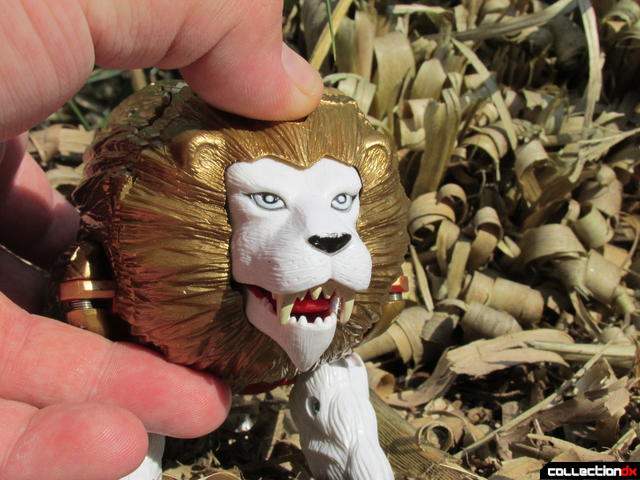 Lio Convoy's beast mode is easily one of the most detailed and impressive sculpts of the Beast era that I've had experience with. The white fur is molded nicely and the golden mane looks equally impressive. While his face is a little "cute" and derpy, I do enjoy it, especially the opening mouth gimmick. The mane is supposed to be able to spin but unfortunately, mine does not... 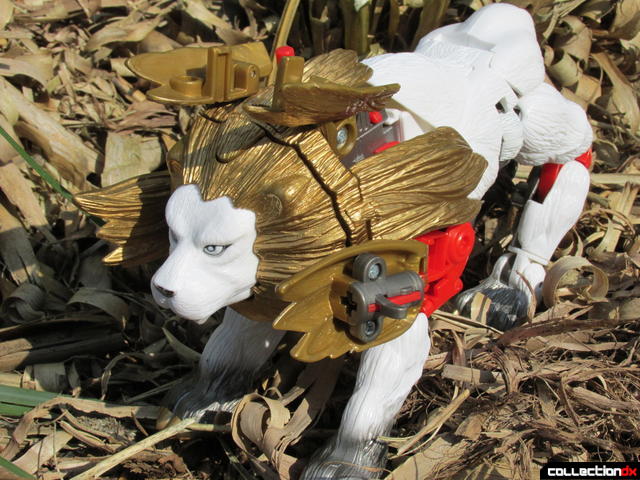 Nor do I have any of the missiles or his two blasters that would otherwise be included which makes his beast mode's attack mode next to useless. 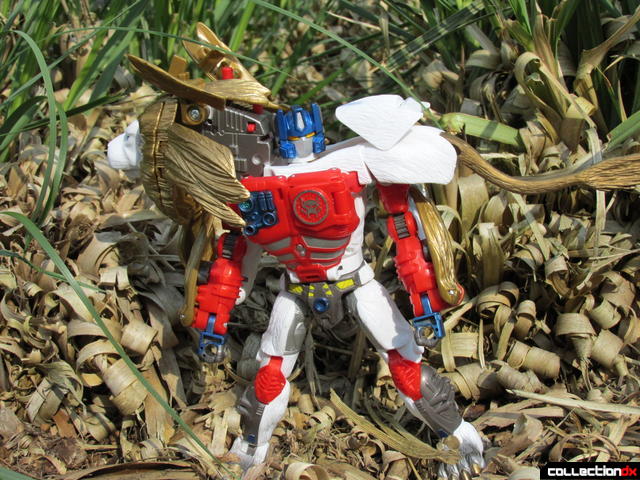 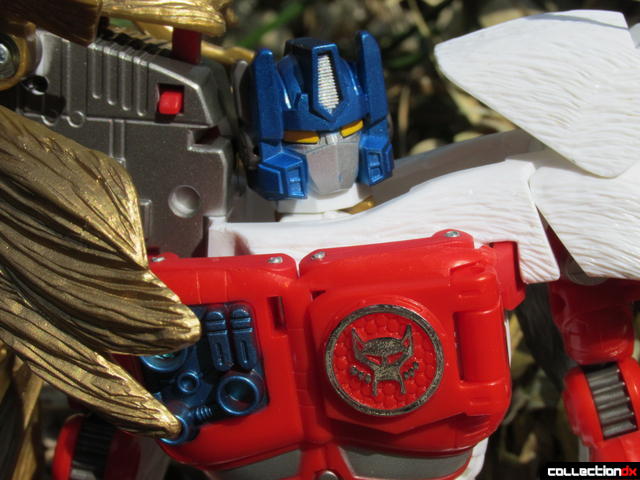 Lio Convoy's robot mode is typical of the Beast era, with slightly off proportions, top heaviness and generally looking kinda weird but there's no denying that this is Lio Convoy! The heroic Maximal and leader of The Pack certainly has an aesthetic charm to him and the sculpt just gets more elaborate as tech details emerge from his fur and break up the white and gold with reds, blues and greys. 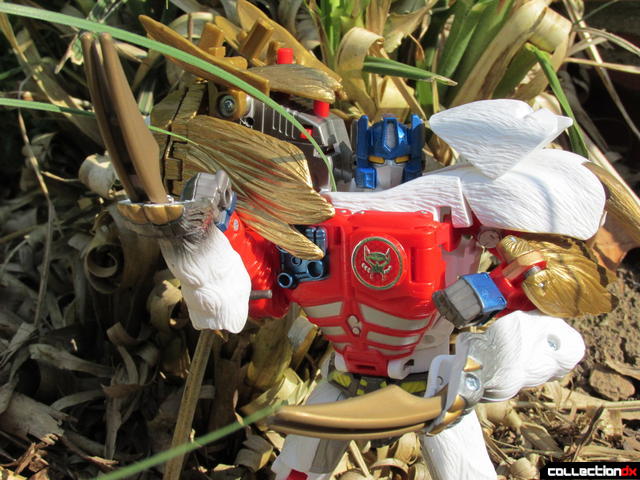 Lio Convoy's beast mode weapons are also available in robot mode but because I don't have most, we'll have to settle for the HUGE-ASS CLAW BLADES. He's lion-robot-Transformer-Wolverine-Snikt-Snikt! That's bad-ass! Lio Convoy is an immensely fun figure to own and one that I never had any intention of seeking out, so with that I guess it's time to clarify his story.

I found and bought Lio Convoy in a Children's Society charity shop in my home town. Charity shops, for those outside the UK, are like thrift stores or Goodwills so you can start to get an idea of how mind-blowing it is to find a Japanese Beast Wars figure there, let alone in my tiny-ass town. The odds are... astronomical! The history of this guy fascinates me too. Who was his previous owner? Was it an avid collector who sadly passed away or lost his collection to ignorant parents throwing out a box of stuff? Was it bought from Japan or as an exclusive from the now-defunct Hasbro Collectors website in 2000? 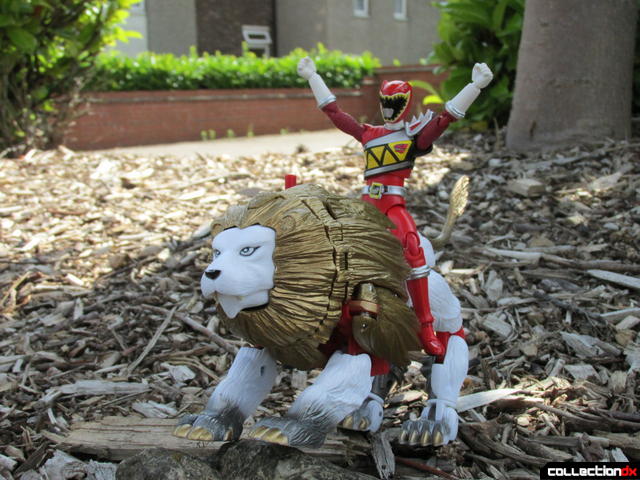 Personally, given the various paint chips, missing accessories, and it's place among other assorted western Beast Wars figures; I'd say this probably belonged to some lucky kid who found it in an equally bizarre place or in an eBay lot bought by a parent. I'd hope that kid loved this thing for all it's worth, not because it's an expensive Japanese import but because Lio Convoy is just a cool Transformer that I'd have loved as a kid. Lio Convoy's adventures aren't over but for now, I'll gladly give him a home.

Thanks for reading everyone, I hope you enjoyed it! If you'd like to see more of my reviews, you can check them out on The Website of Doom or you can follow me on Twitter @MintinBoxReview! And I'd like to thank Jmann and CollectionDX for having me!

Iove beast wars , sadly, mine broke at the elbows, and the shoulder locking did not work good. I love the flat head design, though. I want to get the robot masters version, since it corrected the flaws I mentioned, and is a smaller scale. I never liked, nor understand why the leaders were always much larger in toy form, and out of scale from the on screen counterpart.