Mach Blaster is a late-period Machine Robo toy, not released in the US. He’s one of three main heroes in the Battle Hackers series, a sequel of sorts to the first MR cartoon, Revenge of Cronos. Each of these heroes has three modes. MB’s are a robot, a jet/spaceship, and a gun. 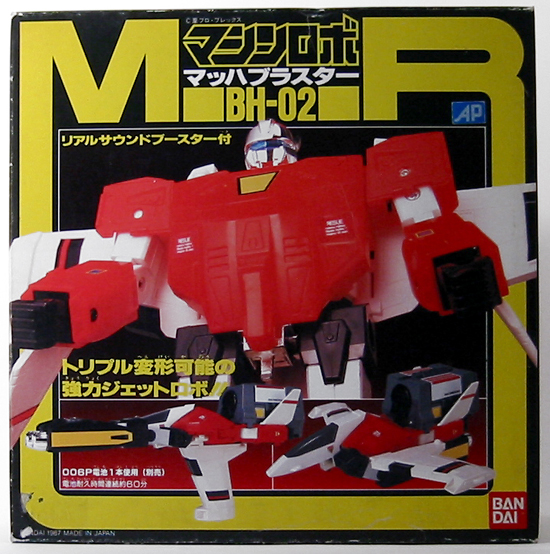 Machine Robo packaging from this era is exquisite. The black background, bold yellow border, and dramatic toy photographs are unlike anything else, then or now. If I had seen these on the shelf as a kid, I would’ve been taken. Or maybe not - there is something adult about the design sensibility. Let’s just say I would’ve noticed them. 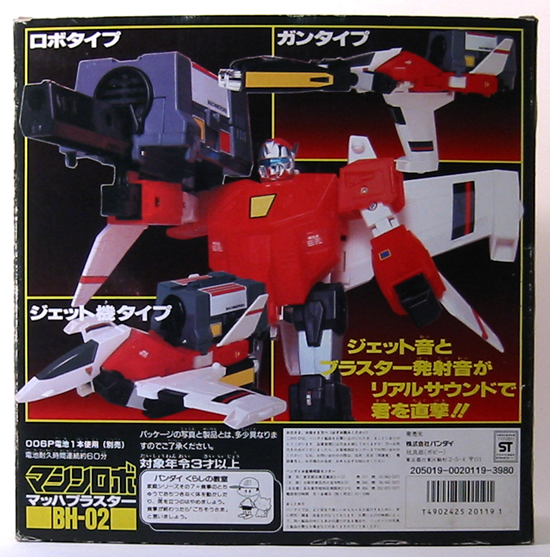 Mach Blaster’s box measures 9.5” 9.5” x 3.75” and features the afore-mentioned killer graphics on the front, with variations on the sides and back. Inside, MB is packed, robot-mode, in a Styrofoam tray. 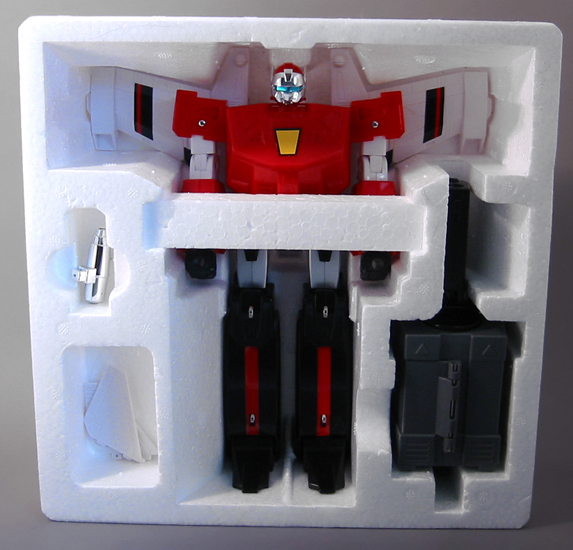 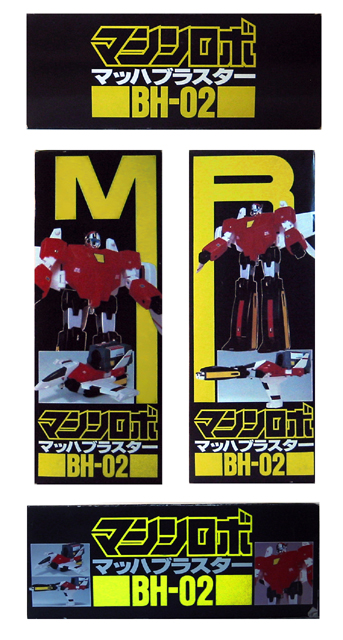 Included are instructions, a brochure (also beautiful, worthy of framing), a decal sheet, (2) tail fins, a chrome thruster thing (which attaches to the blaster accessory), and the toy’s main accessory, the “blaster” itself (though this is just my interpretation, I don’t know that it’s actually called the ‘blaster’). 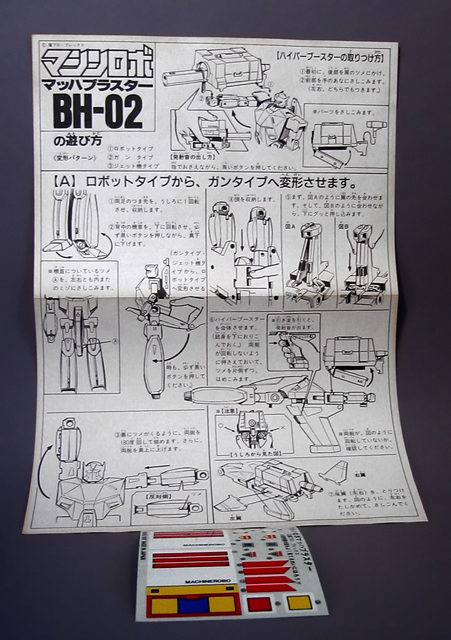 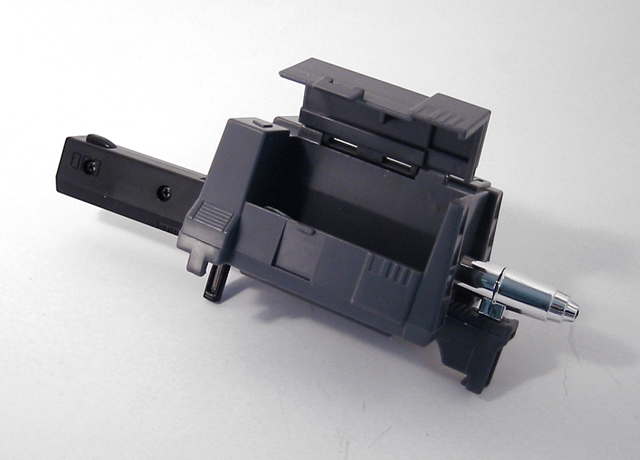 This accessory seems misguided to me. Obviously it’s meant to be the toy’s defining gimmick, but the sound feature isn’t worth the tradeoff of adding a bulky, awkward block which blows the scale of at least two of the modes. Maybe I’m just an old crank, but elaborate electronic action features have always bothered me. I’d rather make my own noises, and compromises are always made to the detriment of the overall toy. 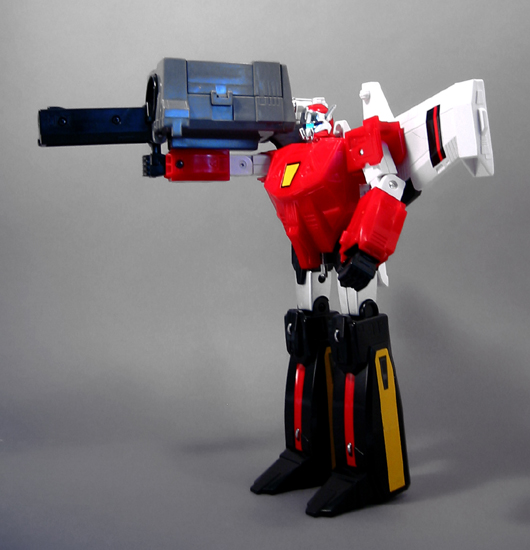 The blaster takes a 9v battery and makes two noises, a gun blast and a jet engine roar. 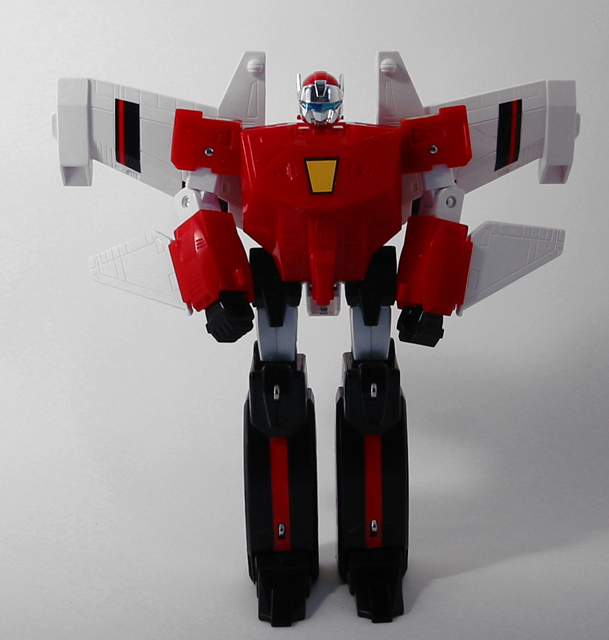 Mach Blaster is well constructed, sturdy. It’s mostly ABS, with a central diecast pelvis component inside the body which anchors the legs and assorted joints. It feels more substantial and high-quality than Transformers of a similar vintage. While not quite Chogokin-caliber in fit and finish, it’s pretty close. 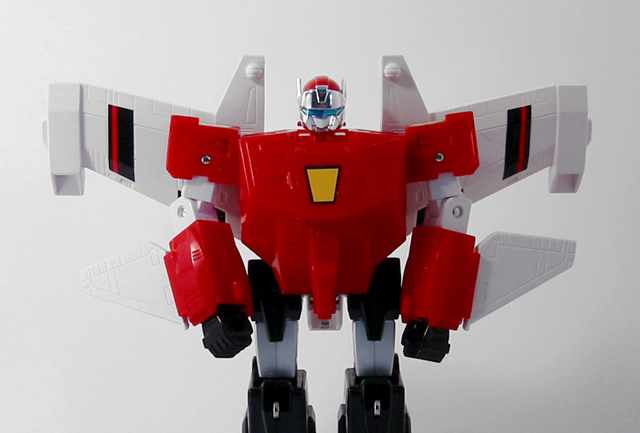 The robot mode (8.5” tall) is well-proportioned and attractive. His chrome head is nice touch; it reminds me of the Ideon. The arms are articulated at the shoulders and the elbows both bend and twist. The knees bend slightly on a single detent. The fists look like they should retract or fold in but they don’t - they just stick out in all modes. The blaster gun is big and ugly. It fits snugly on the arm at two points, but it still just looks like an air conditioning unit stuck to a robot’s arm. 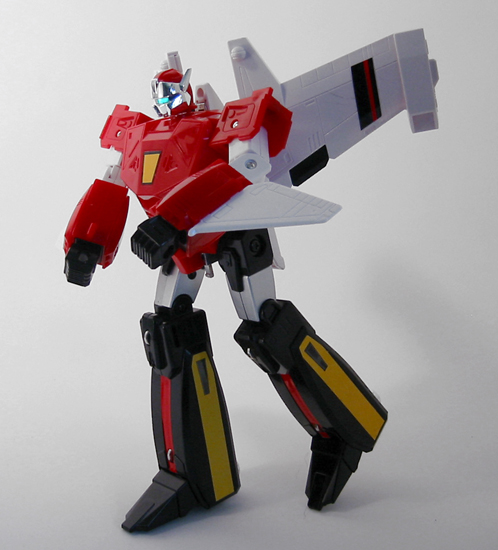 The transformation to jet mode is like a simplified Takatoku Valkyrie. In fact, you can kind of fake a Gerwalk mode! 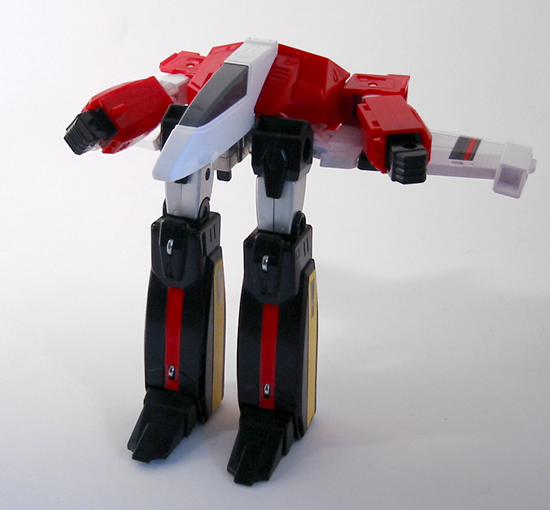 The cockpit swings through the crotch from the back, the legs bend backwards, the arms fold above the head. 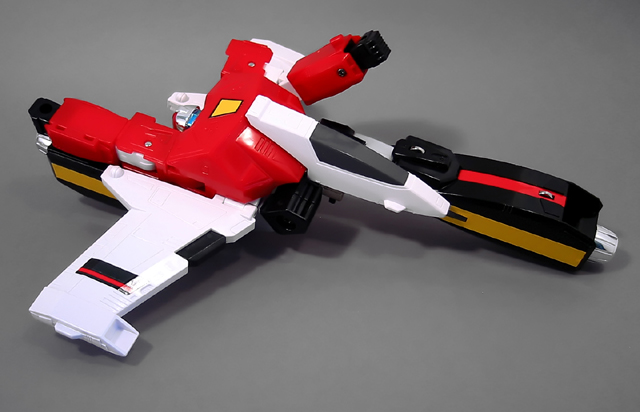 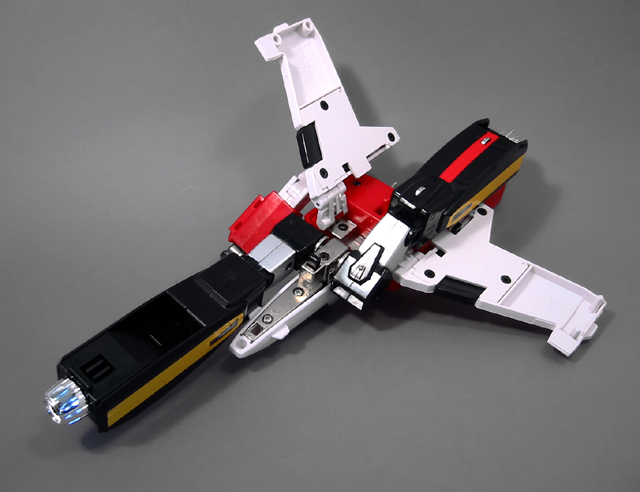 The air conditioning unit plugs into the arms at the rear. The result (8” long with a 9” wingspan) is fine looking, but not inspiring. The cockpit/fuselage interface is nicely designed, but the gray paint on the cockpit looks cheap. The wings feel a little fragile at their joints, held in place with precarious friction. 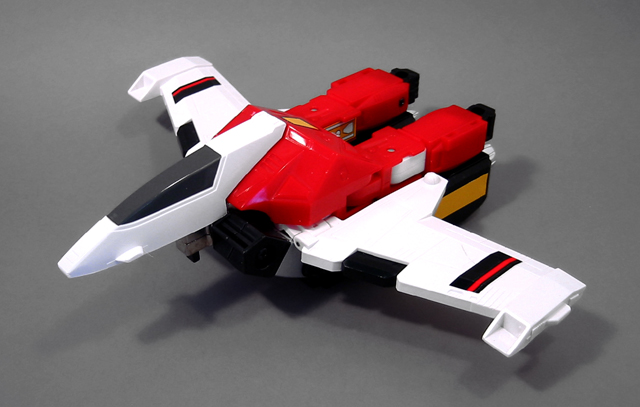 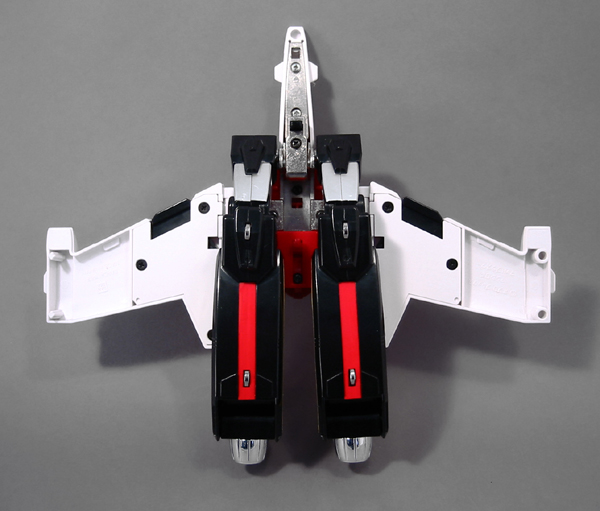 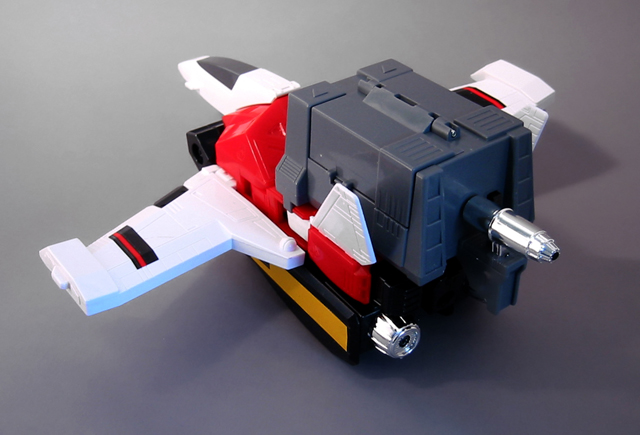 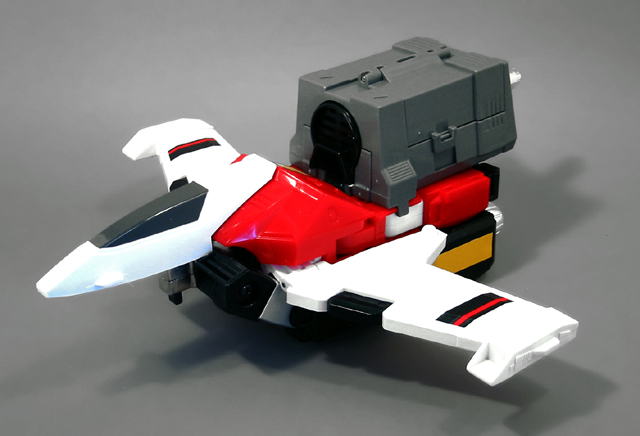 To transform to gun mode, you swing the legs back to “leg” position and fold the wings down to form a handle. The gun mode isn’t bad. It’s a nice size (11” long and 6” tall), even for an adult hand. 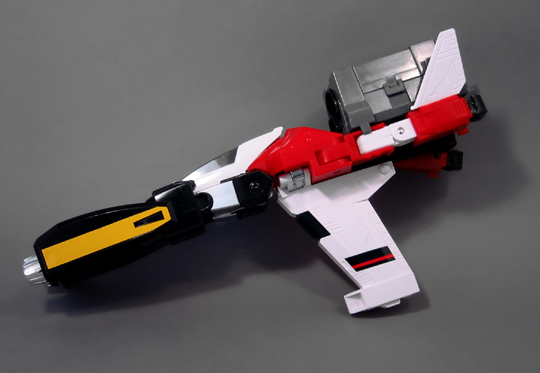 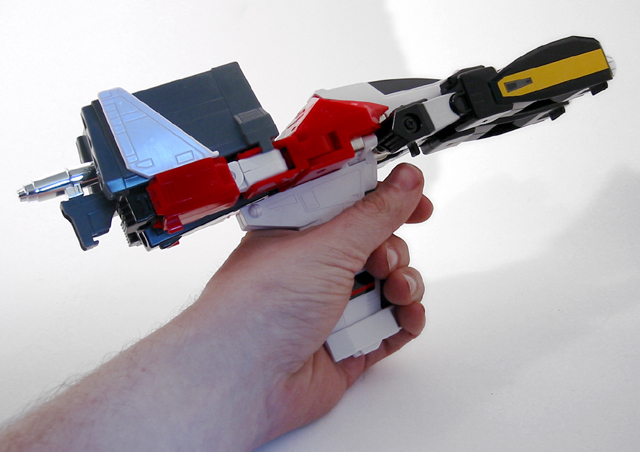 The coolest feature of this mode is that the wings have a built-in spring-activated trigger which activates the sound feature on the blaster! I can dog the blaster, but it does make sense here, though it’s still visually distracting. The gun looks and feels similar to the esteemed Vavilos. 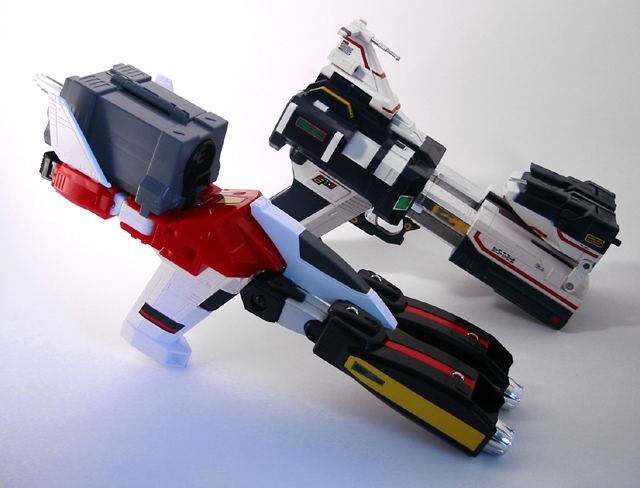 Even with that damned blaster, Mach Blaster is a fine toy. Everything works like it should, the robot is handsome, it does three things relatively well. I just can’t get excited about it, though. The addition of the decals is probably essential to kicking it up a notch. I think I was spoiled by the packaging. What could live up to the box?

Very cool review... the trend of Machine Robo reviews has inspired me to pick up a few items myself. Pics are working now, this is a fantastic review... another toy to add to the 'list'!

I'm glad your review the Battle Hackers line. Do you have the other ones (like the blue Rhino)?

The blaster mode reminds me of something out of Power Rangers.

The gun mode reminds me of the Dekaranger Dekawing

both MB and dekawing are similar to Vavilos' gun mode.