The Wheeled Warriors is a case study in questionable toy marketing. Mattel designed a solid line of vehicle-based toys and dubbed them the Wheeled Warriors. Presumably the designers had some outline of a narrative, but the toys were initially released with a generic “good guys versus bad guys” story, evidenced by the first commercials:

Mattel then decided to give the humble Wheeled Warriors the full media treatment (complete with cartoon, coloring books, board games, pencil cases, etc), reverse-engineering an elaborate mythology to explain the toys. Thus was born “Jayce and the Wheeled Warriors”. Even with character-based designs, the toy-first, story-second method rarely produces successful results. The idea of kitted-out trucks fighting each other is pretty thin gruel for a story, and the cartoon was a thoroughly mediocre product. The whole endeavor promptly flopped, and today is barely remembered, even by die-hard eighties nostalgia-junkies. Having said that, this theme song is awesome.

The toys, however, were great fun. Using a Micronaut-like system of interchangeable parts, the Wheeled Warriors provided impressive play value. The designs were inventive, particularly the psychedelic Monster Minds.

Trail Blazer was a carrier vehicle for our heroes' whips. This is one of those toys you only ever saw on the back of the box. Wheeled Warriors were scarce, and the walkers (Beast Walker was TB's Monster Mind counterpart) even more so.

Trail Blazer's box is big and beautifully illustrated. Both the inner and outer box are heavy corrugated cardboard. The painted boxes of yore had so much more charm than the ugly window boxes we're stuck with today. 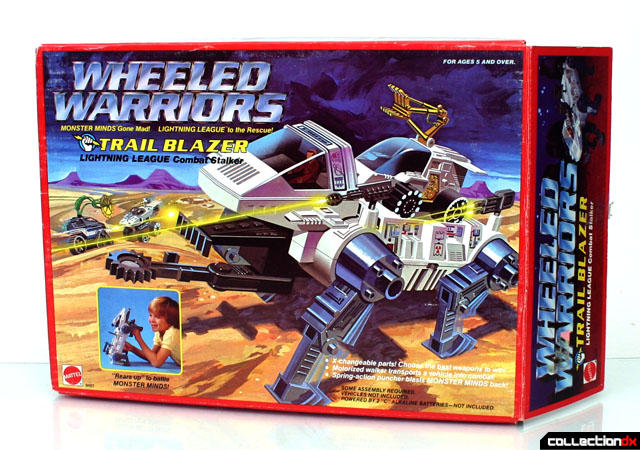 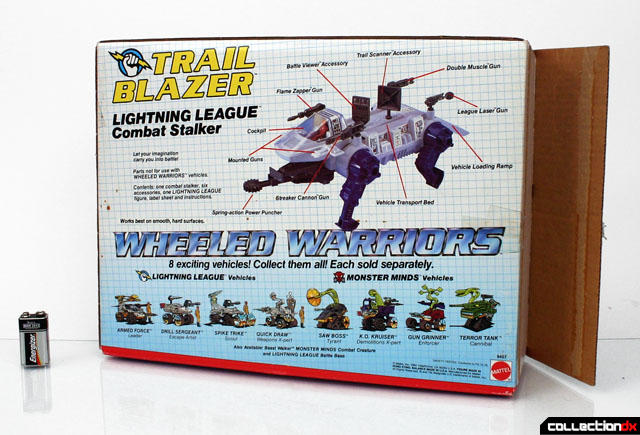 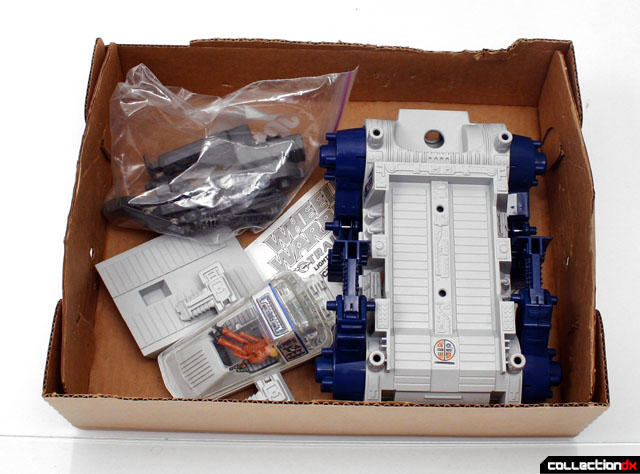 The contents consist of the main body, the head/cockpit, ramp, and assorted weapons. Everything plugs together intuitively. 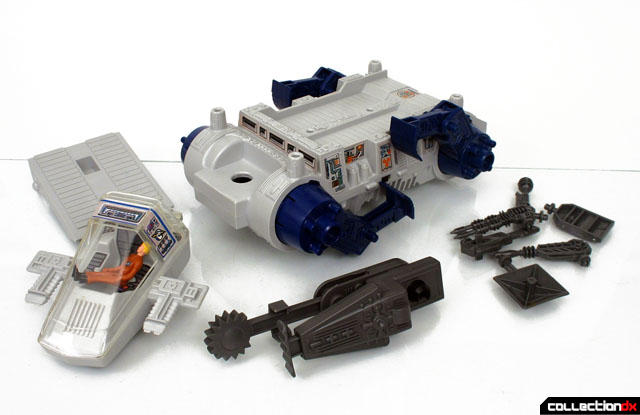 TB's primary weapon is the Power Puncher. You fold it up like so and when the bumper is depressed, the spiked wand sweeps in an arc.

The walker doesn't do much, particularly this specimen. The legs are motorized, but the mechanism doesn't work on any of the three walkers I own. Maybe this is a common problem, maybe it's just mine. 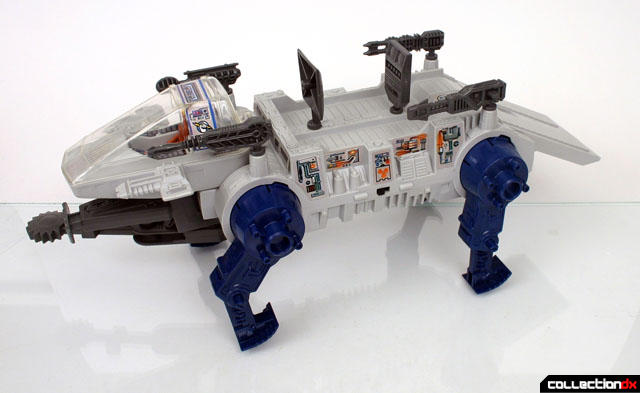 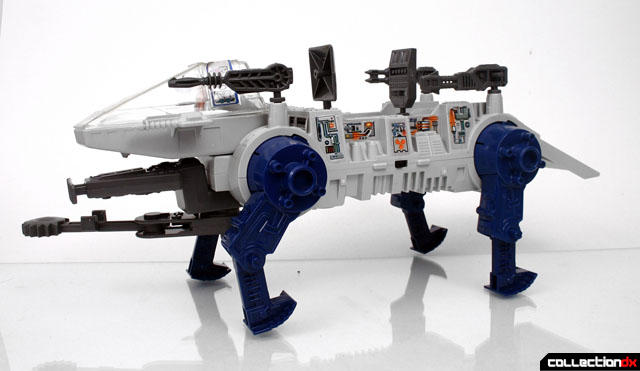 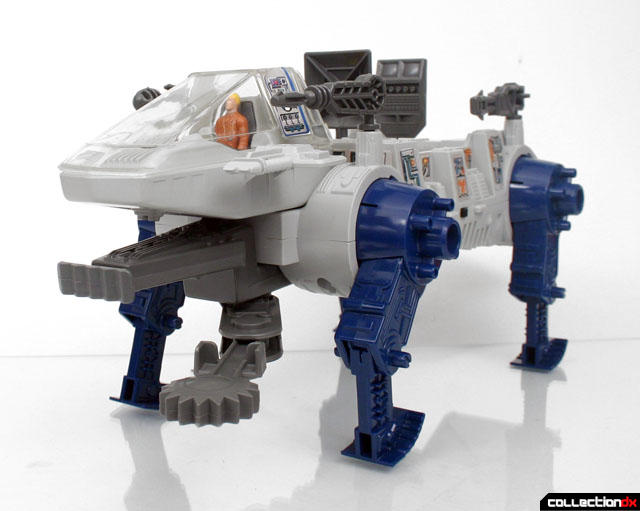 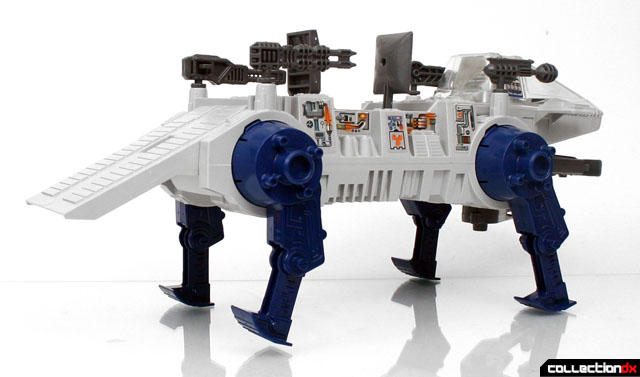 The cockpit is nicely detailed with decals. The canopies on these toys usually turn yellow; this is one of the clearer pieces I've seen. TB comes with an anonymous Lightning League pilot. 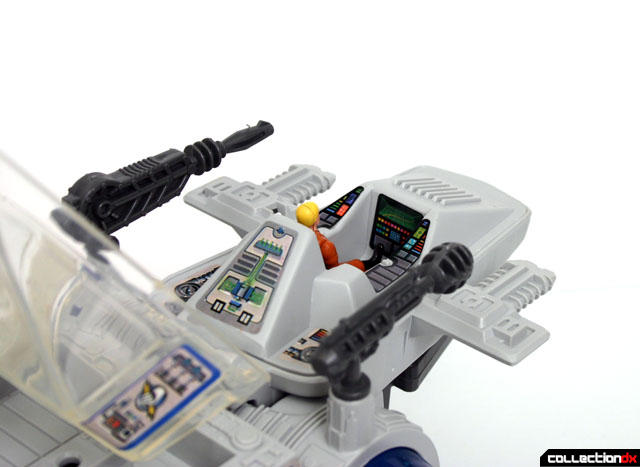 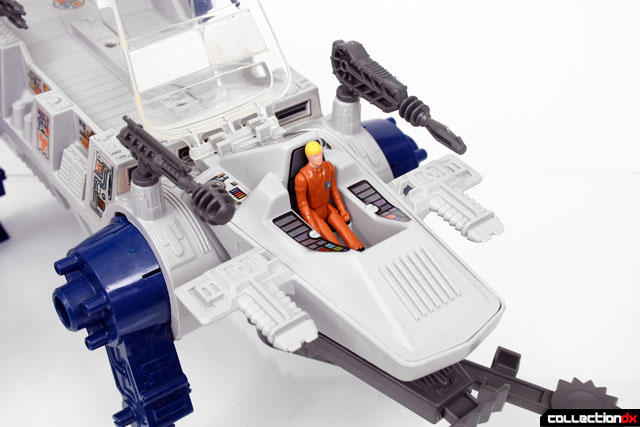 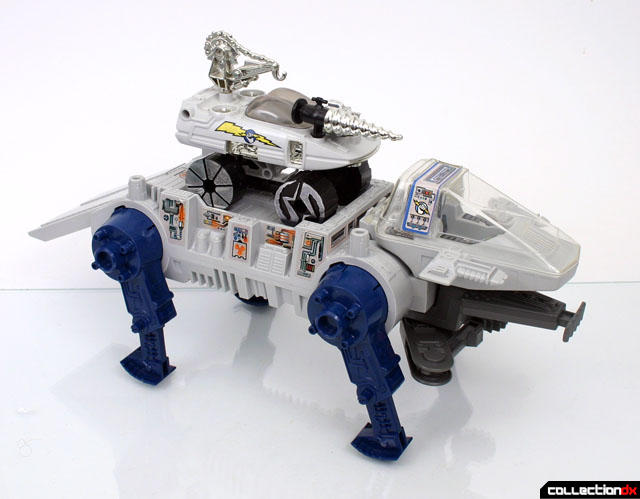 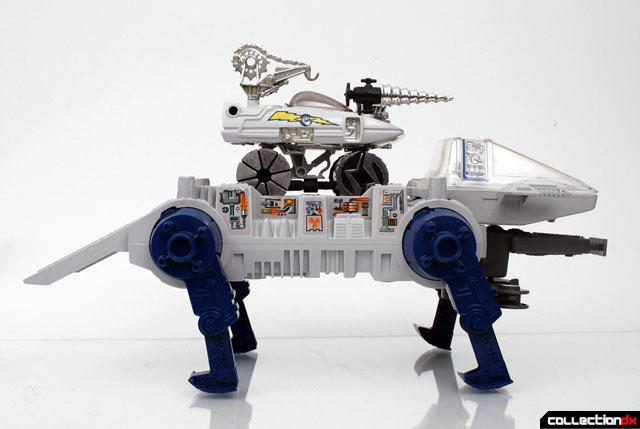 You can reverse the ramp at his back to make him "Rear Up" (quotes on the box, but not trademarked) . 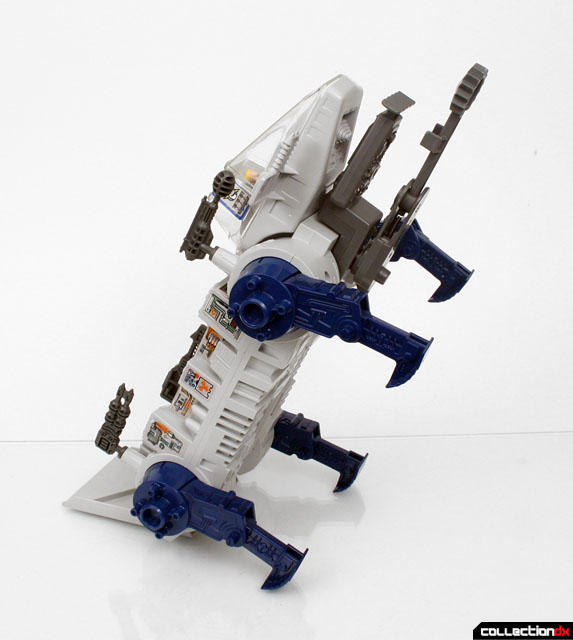 And who's this? It's your nemesis, Beast Walker! 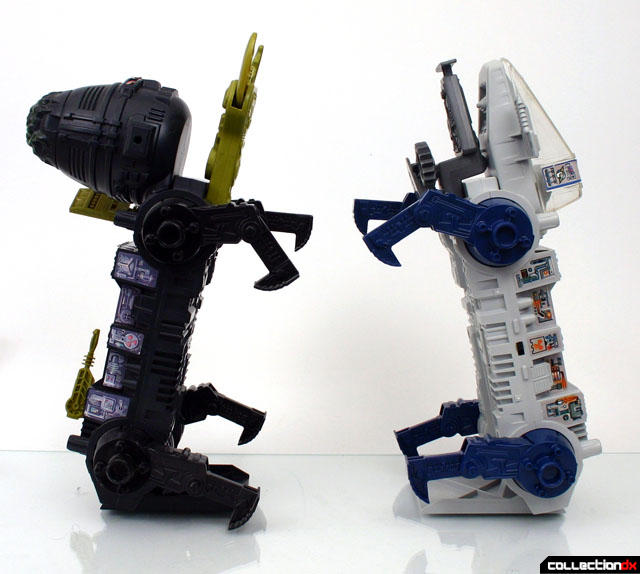 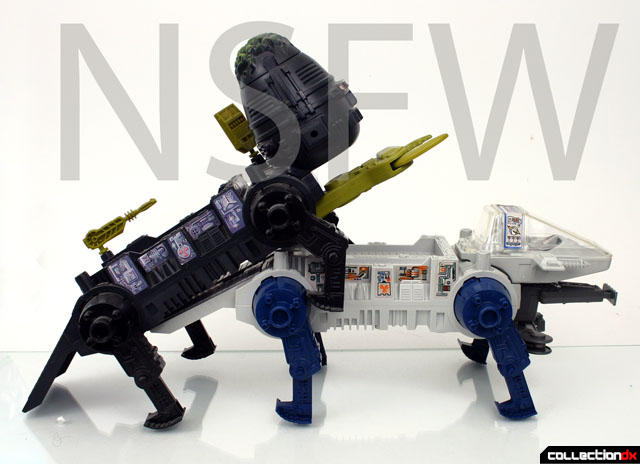 I really like Trail Blazer both as a nostalgia piece and a toy. He's essential to any Wheeled Warriors collection.

I had a few of these toys, wish I still had them they were pretty cool.

Well that thing certainly looks like it has enough lasers to set the trail ablaze----ARE THOSE THINGS HAVING THE SEX?!

OOOOOHHH....that's probably where all the smaller vehicles come from. Okay okay, I get it.

Nice note on the painted box art, too - my favorite toys always had some sort of painted art on the package, even the window boxes.

Glad to see you do these reviews again! Great review!

In France, "Jayce et les conquérants de la lumières" was a really famous show... And it still one of the best known cartoon of the 80's

But I didn't think the toy line was launch in French, indeed I was dreaming to have a toy from this cartoon when I was a kid !