Out of the initial cast of Autobots, Trailbreaker was one of the most humble and unassuming member of the cartoon crew. The character usually appeared in a supporting role but never had a chance at the spotlight. That in itself is somewhat odd considering this was in a show where even Seaspray could get a whole episode to himself. Despite this lack of stardom, Trailbreaker's handy forcefield powers were often used in clutch moments to save the day and he seemed like an overall dependable guy.

When I started getting into toy collecting as a hobby, obtaining the G1 Transformers I remembered from the show but never owned was a high priority. I'd buy anything in decent condition for a fair price and I suppose Trailbreaker made enough of an impression on me that I had to have the reliable black truck guy on my shelves. In vehicle mode, Trailbreaker is a Toyota Hi-Lux truck with a camper shell on the back. Like most of the early Transformers, Trailbreaker is a re-purposed Diaclone toy who received very few changes from the original release. Most notably the black Diaclone 4WD Hi-Lux had yellow stickers for his trim instead of matching set used on this version. At about four inches long, Trailbreaker is pleasingly compact and sturdy. The front of the truck is almost completely diecast metal which gives this Autobot a lot of heft. The detailing and finish on Trailbreaker make him quite an attractive piece even if he's not nearly as glamorous as a sports car. He's got that quiet majesty of an off-road vehicle and can even invoke the classic "commercial" low angle money shot. His robot mode parts are pretty well hidden with the only egregious bits being some visible parts of his legs underneath. 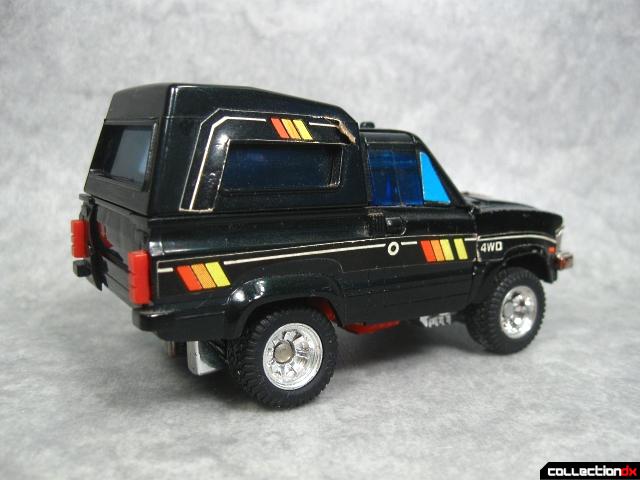 The colorful patches along his sides are fairly authentic to a real 80's Toyota truck. I really like the use of clear plastic for all of his various windows. They are all tinted just enough so it's hard to see the blatant robot head sleeping inside the camper. Trailbreaker's front windows are broken up a little awkwardly by a pair of bright blue stickers that don't quite match. As a former Diaclone toy, Trailbreaker featured a little hatch on top of his roof to let a driver sit inside. Since I don't own any Diaclone mini-figures I will let their most recent relative, Spike, attempt to demonstrate this gimmick. Sadly he is a growing boy and doesn't fit as nicely as he did in the cartoon. He looks good with his fellow Autobots such as Sideswipe who is here represented by the G2 repaint. Next to Skids, Trailbreaker's rugged vehicle mode proves much more appealing than the weird compact car everyone thought was a van. And like many G1 Transformers, Trailbreaker comes with a bunch of parts that store absolutely nowhere in vehicle mode but are still essential to completing the figure. You get one radar scanner, a pair of fists, a pair of blasters, and two twin missile pods. His transformation is straightforward with everything unfurling from the truck mode in a logical manner. One thing to note on old Trailbreakers is the large hinge his head moves around on can become loose. As there is no way to lock his head to his upper body, the whole assembly can fall back down at the slightest touch. However the pin holding the hinge together can be easily slid out so the mechanism can be tightened with a little floor polish or nail polish. Head issues aside, Trailbreaker makes for a good stocky guy in robot mode. To complete this form as per the instructions you just need to insert his fists and affix the radar scanner to the back of his head. The animation model didn't deviate too much from the toy with the most notable differences being a more human-like head and an actual pelvis to make him a less stout looking. The toy's head is a typical 80's design that looks like a cousin of the GM from Gundam. Later reissues changed the red plastic visor to blue in order to better emulate the cartoon. Overall Trailbreaker's noggin isn't the most exciting part of the figure and tends to blend together as one big black block. That being said, the little silver "vents" on the side do add some welcome flair. I especially like the design of the stickers as they resemble the sides of a customized racing helmet. The radar scanner is a weird bit of Takara SF Land gear that resembles some kind of slide projector or the engine of a hot rodded car. And as with many early Takara toys, Trailbreaker has lot of stickers placed all over his body to enhance the look of the toy without molded surface detail. Even the space behind his forearms gets a bunch of nondescript sci-fi stuff. From front to back, Trailbreaker is one of the more cohesive Autobot cars in robot mode. All of his vehicle parts are smartly arranged into a boxy form with even the camper shell becoming a tidy backpack. It's interesting that almost all of the truck mode is situated above his waist with only the wheels remaining attached to his legs. Most Trailbreakers have a pair of slots in the back for storing his accessories but some variants omitted this feature. While doing research for this review I was genuinely baffled at how almost every picture of his toy had the two silver blasters sticking up from behind his shoulders. This kind of common defect isn't good for Trailbreaker's low self esteem as mine can't even replicate what's shown on the box art. In the cartoon, Trailbreaker was depicted with one regular hand and one gun hand which corresponded to the chromed blasters from the toy. Like with the fists, the blasters slide into the spring loaded mechanism and could be launched with the the flick of the red switches. On the American release the springs were severely weakened to comply with child safety laws so there will be no rocket punches coming from this guy. Still the blasters are good looking weapons and Trailbreaker has adequate articulation to threaten any Decepticreeps who cross his path. His other accessories are a pair of twin missile pods which honestly look kind of awful. They're too short to be intimidating and look more like a pair of stunted alien digits than some kind of weapon. Something about them feels unnecessary like as if Takara was just padding the accessory count. As a Autobot warrior, Trailbreaker carries his bulk well and looks great alongside the slimmer Sideswipe. And here he is with ol' Skids who was purchased from the same store a year before I got Trailbreaker. In the end Trailbreaker was a dependable guy who seemed to get along with everyone. After a while he just sort of faded away from the cartoon and was barely in the old Marvel comics except as crowd filler.Still, there is something to be said about him both as a character and a toy. Trailbreaker was part of the strong initial lineup that made Transformers what it is today as he is both a solid toy and a pleasant memory to fans of the original cartoon like myself. He had enough of a legacy to get a spot in IDW's comics and even received a few new toys along with his remold partner Hoist.

The original Trailbreaker toy is definitely one of the best of its era with the only downside being a few necessary accessories to complete the robot mode. If you have a hole in your Generation One collection, Trailbreaker makes for a great addition. While some early Transformers have become a bit finicky and fragile with age, this old truck is just as tough now as he was back then.

This mold is one of the best of the diaclone/Diakron/G1 Transformer releases (along with the transformers character itself being one of the most memorable). The design is well done, and full bodied, albeit even if he is a little chunky.

It was released in several colors:
Black, blue, or yellow for Diaclone, blue for Diakron, black for G1.

The alternately equipped Hoist mold (still the 4WD Toyota Hilux as the base) came in the following colors:

Red, blue, green for diaclone, (no Diakron release) and green for G1

The mold had a lot of utility, being a pickup truck base, allowed it to be a pickup with rear cap or a tow truck/wrecker. I can only imagine some of the other great truck mode alterations they could have made had recolors and remolded been as popular back then as they are today.

Currently I own the Blue Diakron release and the black G1 release of the mold featured in this review.

I ask because if you do that you could exchange the springs for stronger ones. I've done it with my G1 Dinobots (except Slag because I don't have his launcher), and given springs to those whose launchers had none (my reissue Bluestreak, and my Ultra Magnus).