Liabe is a weird entry in the Shogun line. Outside of Godzilla, I think it's the only Shogun toy whose source material is a movie, rather than an anime or tokusatsu show. It comes from the 1978 Kinji Fukusaku film, Message From Space, which was made to cash in on the Star Wars craze.

"The toy is...well, it's completely unlike any of the other toys in the line. It really sticks out like a sore thumb. It lacks the simple contours and varied colors that nearly all the other Shogun Action Vehicles have. Instead, it looks almost like a big, silver flying computer chip. The whole design looks very busy. 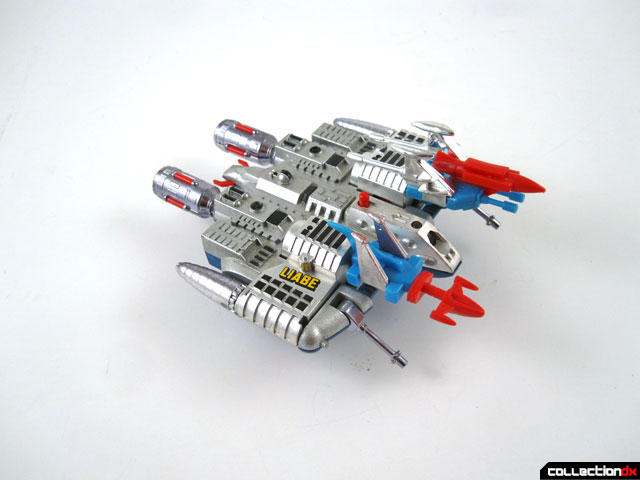 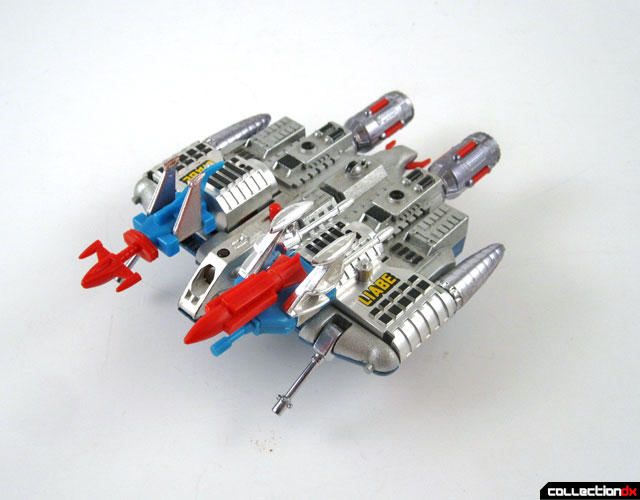 It looks that way from pretty much all angles. There really isn't a particularly flattering side to view it from, in my opinion. I'm sure the movie and this ship likely have its die-hard fans that would disagree, though. 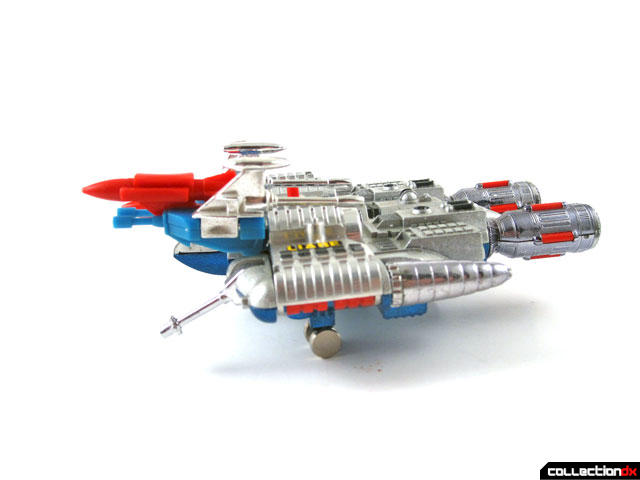 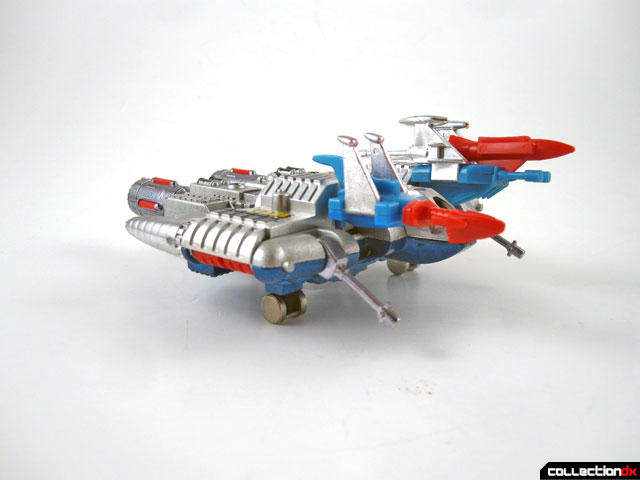 From directly overhead, I think you can start to at least see what they were going for, but I think the Space Fighters throw off the symmetry and clutter up its appearance. From a marketing perspective, I can see how they might seem like a good idea to add play value, but I think the design suffers for it. To me, it's like sticking a couple of unsightly space ships on the Millenium Falcon. It just wouldn't work. Sometimes less is more. 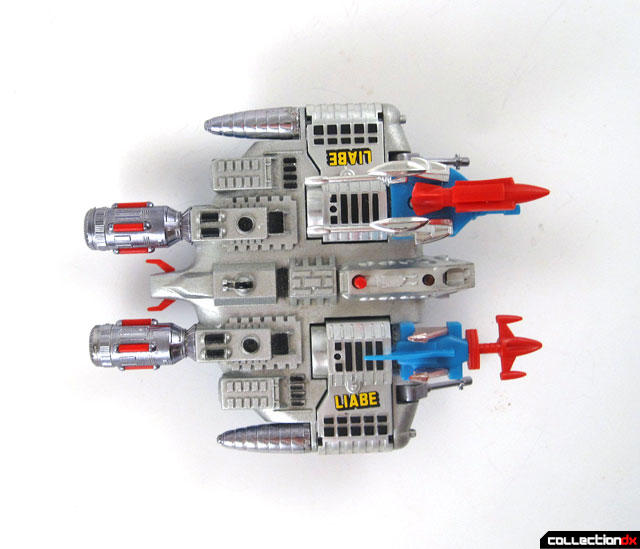 The main gimmick on the toy is that when you press the little red button on the top, the side pods (where Liabe is written on stickers) fold out. 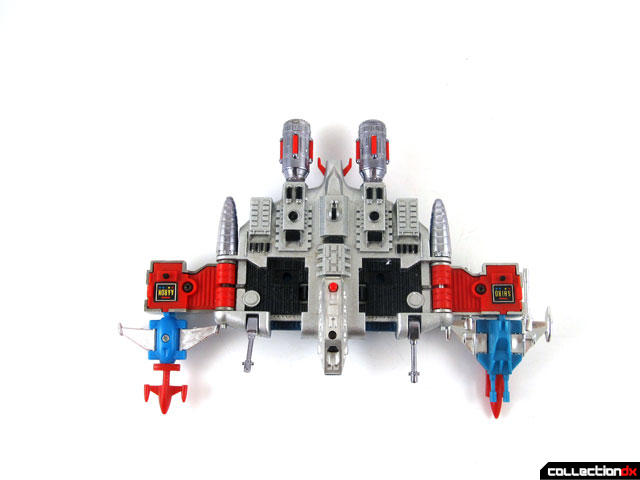 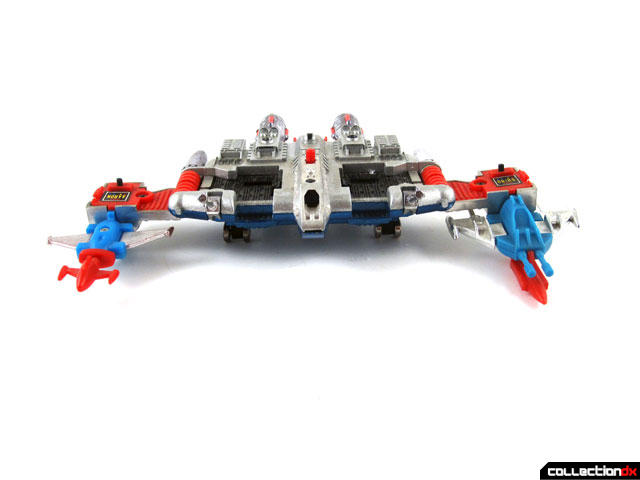 This is probably the best mode of the toy, but although I said earlier that the predominantly silver coloration was not in keeping with the other toys in the line, I sort of don't like the now exposed red and black areas, either. I think I was beginning to think of this more along the lines of a Star Wars ship rather than a Shogun one and now those colors don't match that aesthetic, either!

Perhaps it would fit in best with the Microman or Diaclone style. The Space Fighters, with their bright red, blue and chrome, do tend to make me think of that line. I should point out that the Space Fighters can be launched by pressing the small black buttons placed behind what I assume are the pilots names (Aaron and Shiro). However, on my specimen at least, the one on the Shiro side tends to fly off on its own when the pods fold out initially. 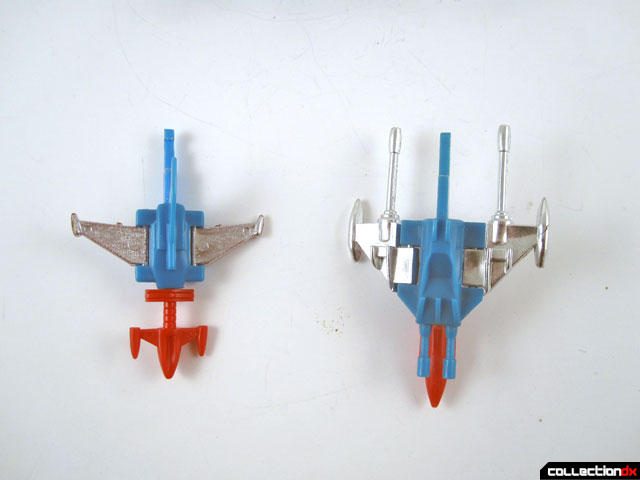 Also, the red part on the undercarriage of Shiro's ship comes off. There is nothing about that on the box so I don't know if it's supposed to or not but it does. 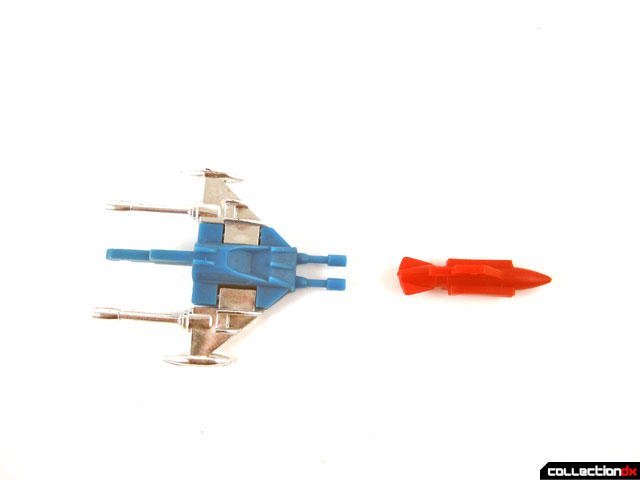 The cannons on the front of the ship can be raised and lowered but mine tend to just flop down. 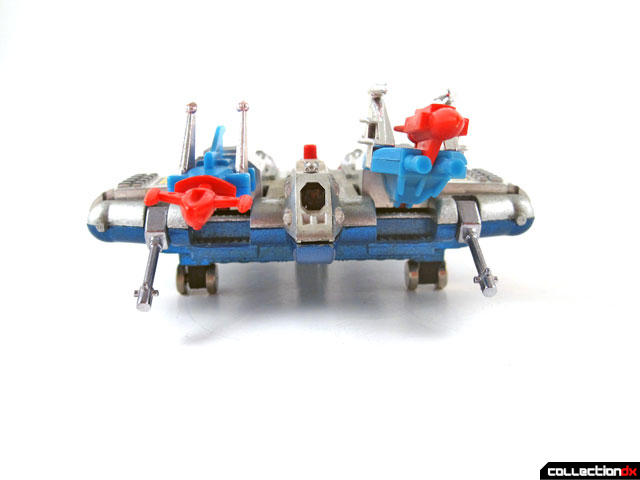 Liabe comes in a slim box and is packed in a styrofoam tray. 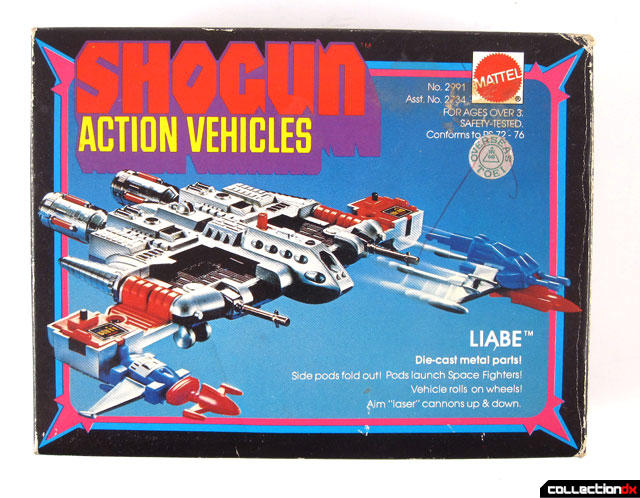 The back of the box features some of the other Shogun Action Vehicles. 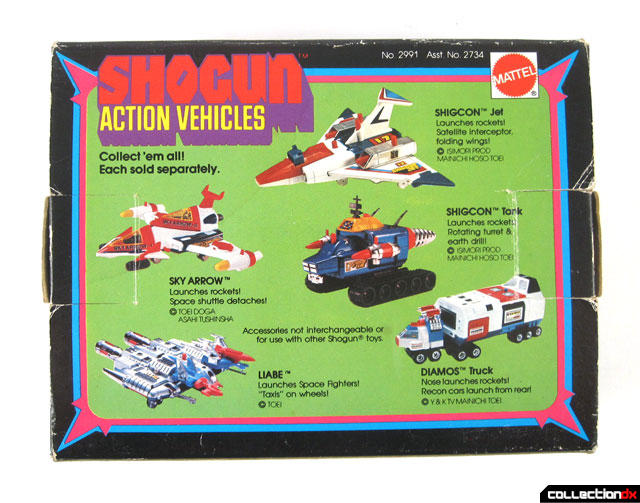 The top and bottom views demonstrate the toy's features. 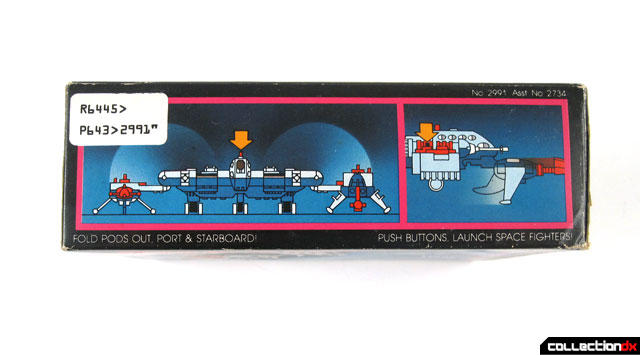 Liabe was shipped to retailers in a plain brown cardboard box containing 6 pieces. 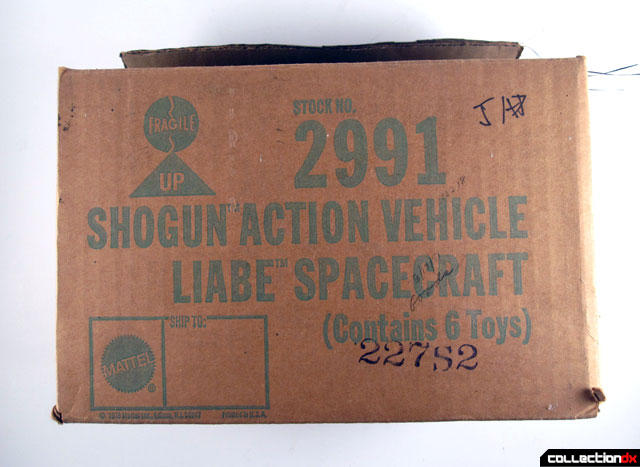 So in closing, Liabe isn't really a bad toy per se, but it's sort of bland and doesn't really seem to have a place with the rest of the ones in the line. Perhaps a full line of original Japanese Message From Space toys would do it more justice (this is a re-release of the Popy PB-56 toy), but as a Shogun Action Vehicle... let's just say it's for absolute completists only. 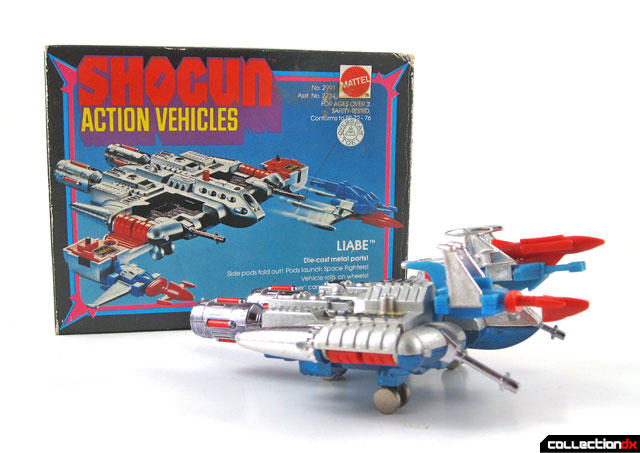 2 comments posted
But does it come with a tiny

But does it come with a tiny Vic Morrow?

Weirdly in 1978 this was about the only thing from those Shogun Warrior Vehicles that we knew what it was and had been exposed to its movie. (astonishingly Message From Space actually got a major US theatrical release... which might explain why we really stopped getting Japanese imports until the age of VHS...).

Anyway the Liabe was a pretty fun toy if you had seen the movie and knew the ships. No Vic Morrow required. It was rather normal compared to some of the other Shogun vehicles. Does anyone remember the 'Sky Jet"? The Liabe seemed positively normal and sleek by comparison.

I'm still heartbroken. One day in 1978-79 my Grandmother dragged me along with her to a department store that was having a going out of business sale, in Queens, NY. I forget the name of the place. But right there on the shelf in front of me, marked down to around 50 cents each were the plastic model kits of the 3 Message from Space ships and a gorgeous Battle of the Planets Phoenix. I had never seen these models before. I would never see them again. And Grandma would not let me get such stupid scifi things and insisted I get some airplanes and cars :_(. At least I was able to reach a compromise/trick her and ended up with some of Aurora's last SF offerings, which all looked like planes to her. But still I had the God Phoenix in my hands.... :_(