This is a comparison of the Power Rangers Mystic Force Mystic Morpher BANDAI #25101 and it's Japanese counterpart, the Magiranger Magiphone made by BANDAI Japan. 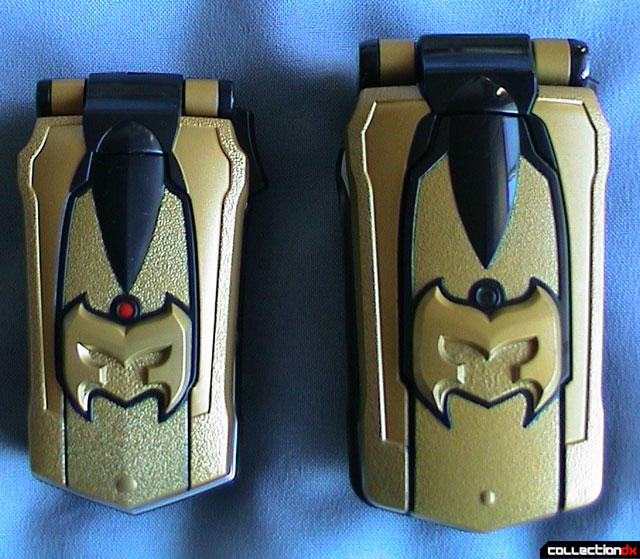 Both morphers use 2 AAA batteries, which are not included. The Japanese morpher is slightly larger than the US version.

You start out with the morpher folded up like a clamshell and you open it up to Cell Phone Mode. The US version uses a release button to open, while the Japanese version is opened manually. 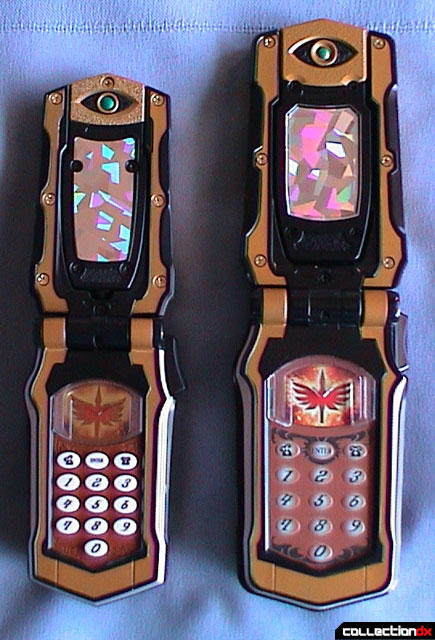 From Cell Phone Mode, it can be unfolded further to Wand Mode. (US version opens manually, while the Japanese version uses a release button to open.) In Wand Mode, a spring-loaded clear plastic tip extends to become the tip of the wand. 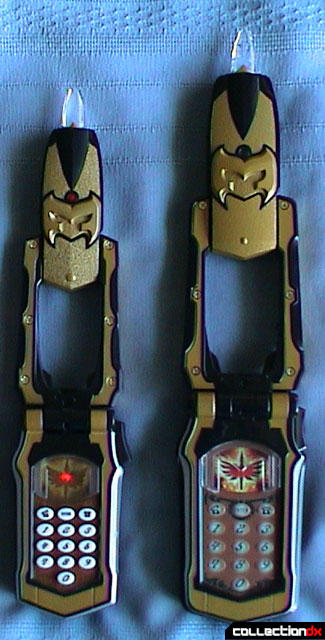 LIGHTS - The US version has a single red light under a Phoenix emblem on the Cell Phone and when it lights up, it looks like the heart of the Phoenix is glowing. It's a neat effect that is lacking in the Japanese version, but because the red light is in the Cell Phone section of the morpher, the tip of the wand doesn't glow.

The Japanese version has a red light in the Wand section that contains the clear tip. It looks like a camera phone lens on the Cell Phone. The clear plastic tip conducts the light like a fiber optic, so the tip glows too. 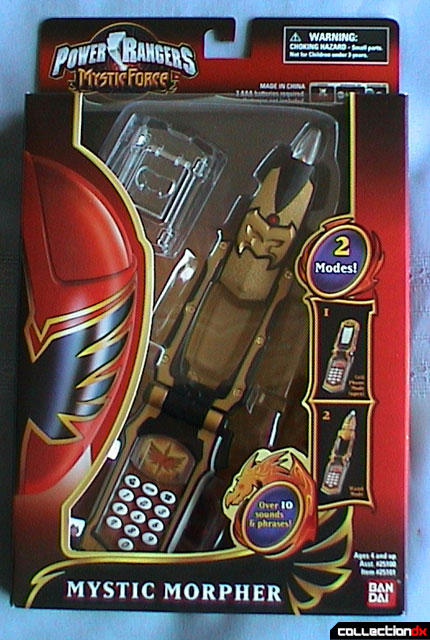 Pressing the numeric keys produces a sound that can be one of 4 different tones. The tones seem to be randomly generated, so pressing the same key may give you the same tone or you might get a different tone. The morpher stores in memory the last 4digitspressed. If more than 4 digits are pressed, the oldest digit is replaced with the most recent.

You select up to 4 digits and then press ENTER. Each digit corresponds to a list of names. A sound is heard, followed by the name that corresponds to the digits you entered, followed by a different sound. For example in the US version, if you pressed 5-6-8-0 + ENTER, you will hear a sound followed by a voice saying, "Prifior, Unos, Tryn, Nermax", followed by a different sound. Entering certain combinations of numbers will produce "special sounds". For example, entering 1-2-4 will produce a Cycle Sound after the names are spoken. The US instruction sheet has a list of 9 Special Sounds, while the Japanese box seems to show 8 Special Sounds.

The Japanese version comes with 5 small cardboard squares that have emblems representing the Blue, Yellow, Pink and Green Rangers and the symbol for the Rangers as a group. The morpher already comes with the Phoenix emblem of Magi Red built into it, so the Red Ranger emblem is not needed. You can slip the cardboard emblem under a piece of clear plastic on the morpher, thus customizing the morpher to the ranger of your choice. This feature is missing on the US version.

The US version comes with a clear plastic belt clip. The Japanese version does not.

I was very impressed with the US version. This is one of the few US Morphers that I would actually recommend! While there aren't any lights in the Wand section, it's not such a great loss and the light under the Phoenix emblem looks very nice. The sound volume is not as loud in the US version, but the clarity of the voice is excellent. Very, very clear pronunciation. BANDAI did a great job in bringing the Magiphone to the US audience.

[I didn't bother listing the codes for the Special Sounds. The codes are different for the 2 morphers and I'm not sure if the sounds are the same or not.]

ATTN Larry Miller: please get in touch with me via the Contact tab on my userpage. I want to talk with you, but I don't have a private address for you.