The fourth and last entry in the Unifive line of Jumbo Machine toys would be Gaiking (ガイキング). The original anime aired in Japan from April 1st 1976 to January 27th, 1977, but would later be shown as part of the "Force Five" program in the United States. Popy would release a Jumbo Machinder of the character in 1976 and Mattel would release a radically different one as part of their "Shogun Warriors" line the next year. Most US collectors had to settle for the inferior Mattel version, until the Unifive re-issue of the Popy classic. 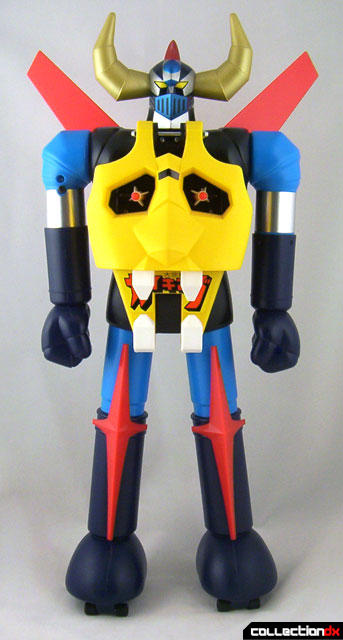 I have never owned the original Popy version, so I can't say for sure, but to the naked eye, the Unifive looks completely identical. One of the first things I noticed when preparing this review is just how many parts this thing actually comes with. It had been awhile since I'd taken it apart so a little dusting was in order. Much like the other two heroes in the line, Mazinger Z and Great Mazinger, I've really grown so used to this toy that I don't often appreciate how nice it really is. It's really got alot going for it besides just it's great design. The missiles in the eyes of the chest both shoot by pressing a tab just next to them. 5 missiles are included, and the spare three are stored in the chest by lifting the Daiku Maryu face and snapping them into the holders. 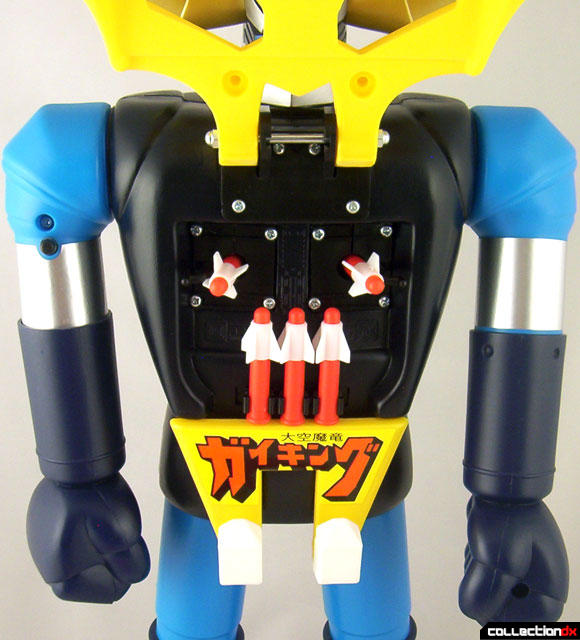 Gaiking also shoots his right fist and his left fist, which doesn't shoot but can be removed, has a hole in it so that it can hold one of his "Counter Cross" weapons. Both of these can be removed from the legs so it would have been nice if each hand could hold one. In addition to these offensive weapons, Gaiking also features a removable set of wings that can be easily slid on and off via two hooks that are placed into openings in the back. 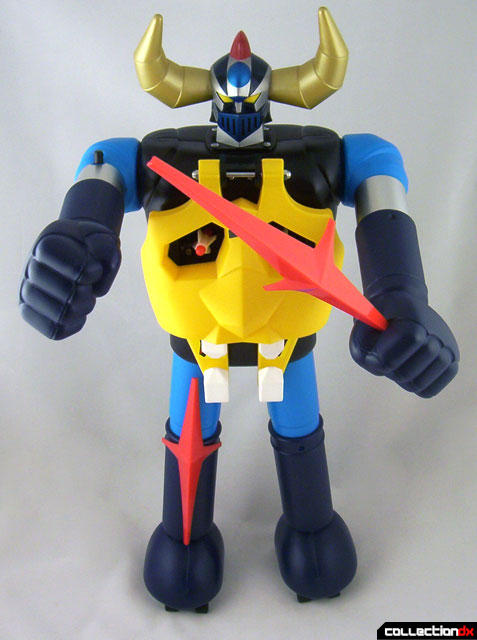 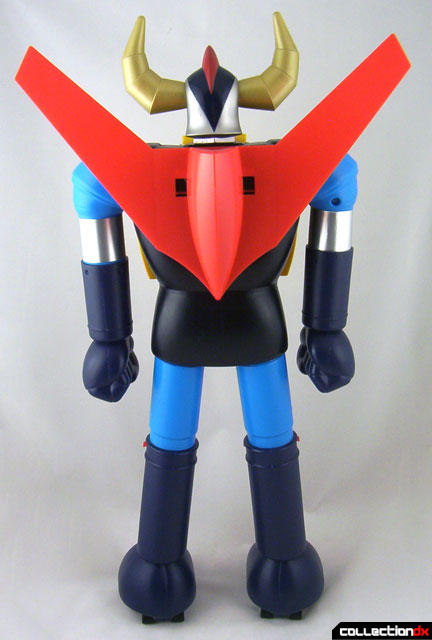 Gaiking also comes with a pair of great big horns so that you can create the head of Daiku Maryu. In order to do this, you need to remove the wings, head and arms. The head just slides out of a hole in the shoulders. You should remove the wings before trying to remove the arms. This is because the arm sockets have two openings, one big and one small, that allows that shoulders to separate when they are lined up properly with the plastic of the shoulder joint, which is molded to match the two holes. The arms need to be pointing backwards, where the wings would be, in order to achieve this. Then, simply replace the arms with the horns and you've got your Daiku Maryu head. 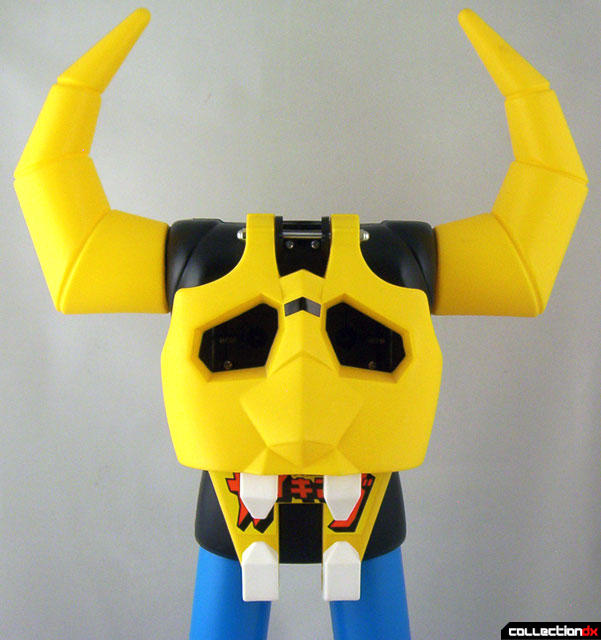 I suppose this is a pretty interesting feature, but personally, I'm not sure it's worth the downside it creates. That being that because the arms are designed to come off, they sometimes seem a little loose and frankly I don't like that the head comes off so easily. I mean, honestly of all the people I've ever met who own this toy, I don't think any actually display it as the Daiku Maryu head. I guess anything that adds play value is nice, but I just don't see much appeal of a Daiku Maryu head with legs.

One last thing I don't like about this toy is it's packaging. While the previous entries tried to emulate the original boxes, this one just has a lame picture of the toy on front. Of course, if the original Gaiking box wasn't so beautiful maybe it wouldn't hurt quite so much to get this one.

I'm not complaining though. Had U5 gone ahead and kept producing these toys, I'd have bought every single one, regardless of how the boxes looked. But as it stands, this is not only the last Unifive Jumbo, it is also the last Jumbo produced in Japan. 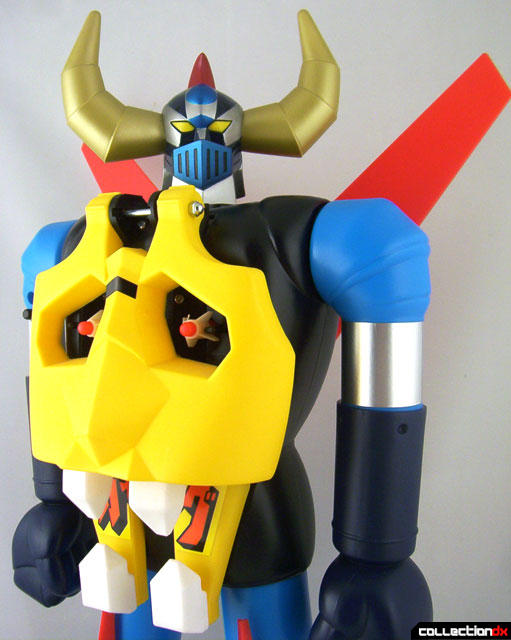 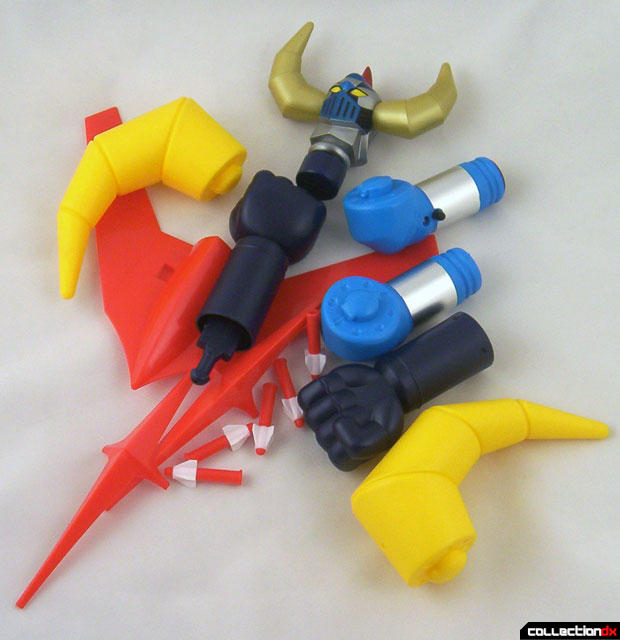 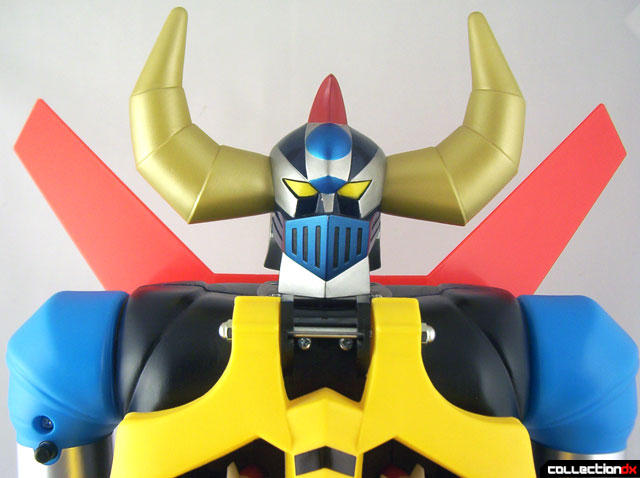 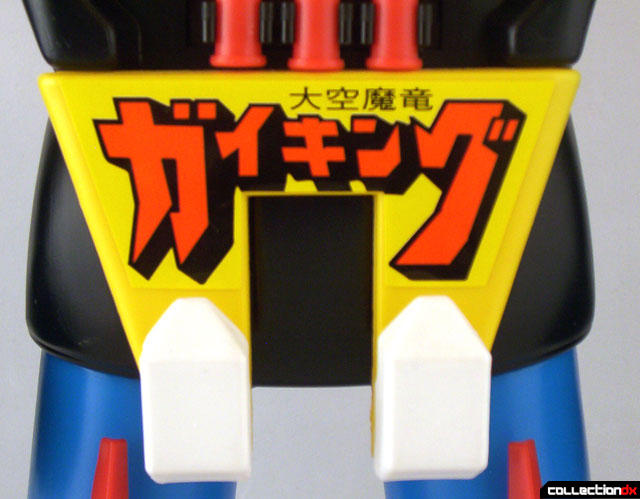 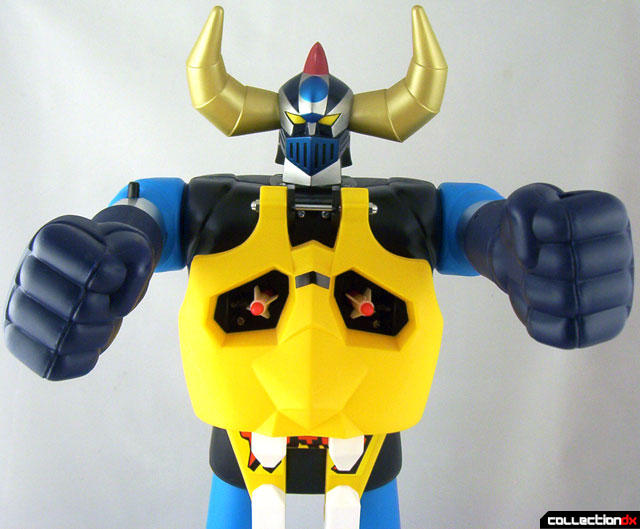 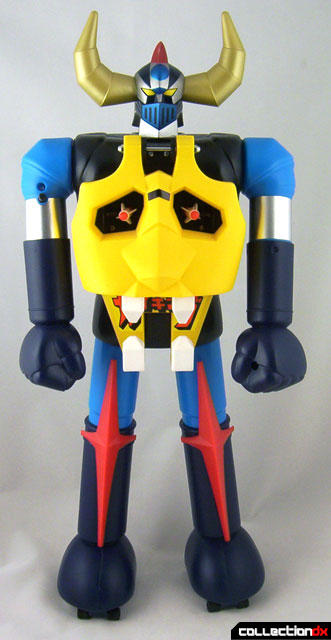 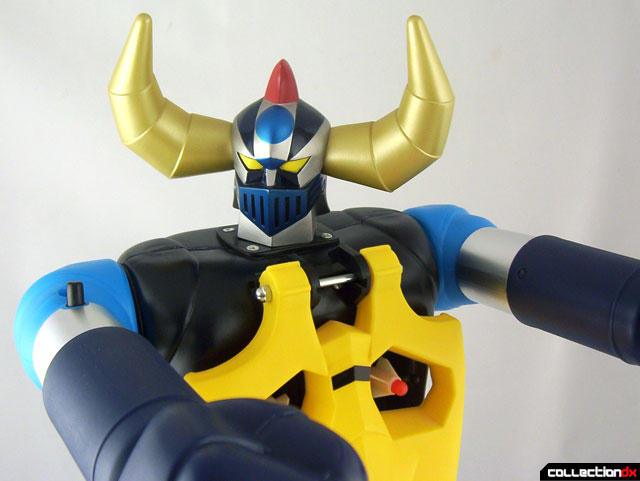 I would also mention that the tabs on the wings can break off if handled improperly. I let my nephew play with this and right away, he broke the tabs clean off.

The 70's Gaiking I had possessed a firing hand (it's right) that was also jointed.

I remember it being a lot sturdier than the new one. While I like the opening face I would have traded that for a firing hand. Though I seem to recall they were selling them after-market for some insane price)

The Mattel Shogun Warriors version of Gaiking had a jointed right elbow and a firing fist. Those were heavily modified from the Japanese release for the US market back in the late 70s. This new version is based on the original Japan Popy version, so it is a very different beast. The old Shogun Warriors version can be had on ebay for not too much money (relatively speaking).

Hey, hey, c'mon...I got a review to write next week! LOL Seriously, I planned to do the Mattel and then Famosa Gaikings next... (Unfortunately, I don't have a Popy or Nacoral Gaiking, yet though.)

Nice call about the wings though. As an adult collector who really only displays my toys, I sometimes either forget or don't even realise which points are prone to breakage, simply because I treat them all very, very gently. Especially my Jumbos.

I got this one back when all the other U-5 s were out. I really like the original style of the Jumbo, but I still have the affection for the Shogun version from my childhood. I have the rarer white missile version of the Mattel Gaiking displayed proudly beside this U5 release. They look great together for the full representation of Gaiking Jumbos.

Nah, you'd still need the Popy, the Nacoral and both Famosa versions! ;)