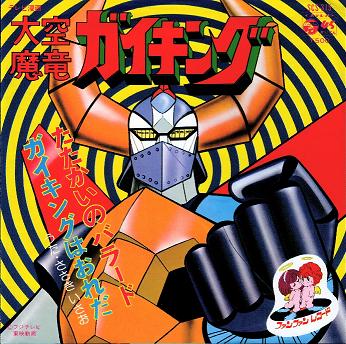 The story chronicled the battle between the crew of the semi-transformable carrier Daikyu Maryuu (also called the Kargosaur) and the Super Robot Gaiking against an invading race of aliens called the Zelons, whose home planet is facing destruction by a black hole. The robot Gaiking was piloted by a baseball star named Sanshiro Tsuwabuki (Sanshiro's name was changed to Aries Astonopolis for the English version of the show with the carrier being called the "Great Space Dragon", a literal translation of "Daikuu Maryuu"). (Wikipedia)

Gaiking would become a prominent character in the Shogun Warriors toy line by Mattel in the late 1970s.

A re-imagined version of Gaiking entitled "Gaiking: Legend of Daiku-Maryu (ガイキング LEGEND OF DAIKUU-MARYUU)" was released in 2005.