Power Animals are no different from those found in the wild today. They have only lived far longer, and can regenerate themselves much faster thanks to the power of the Earth which has been absorbed into them over the centuries. This has increased their defense, intelligence, and size as well. They are also capable of merging their bodies together to form incredible humanoid-shaped warriors which stand several stories tall, and have weapons & special powers granted to each. Even a few days after the battle with Cell Phone Orgu, Gao Lion and the two bear Power Animals are still not getting along with each other. On top of this, Gao Lion is slowly beginning to weaken. Frantically, the GaoRanger go to find a sacred forest. But a city now rests where the forest was, and a rare mushroom that is needed to help Gao Lion can only be found there. A glow of light takes the five GaoRanger deep into a forest. There, they find a small village is being threatened by a strange demon which is destroying the forest. It turns out to be a Bulldozer Orgu. Gao Red is hesitant to call the Power Animals since Gao Lion is still weak. But Gao Lion chooses to fight anyways, and they form Gao King Double Knuckle. Unfortunately, the same thing happens that did the last time, but now their attacks aren’t nearly as effective against Bulldozer Orgu’s strength, and now Gao Lion is more weakened than ever. Seeing that these fantastic guardians (the GaoRanger) are losing, the people of the village call out to their gods to give the guardians help. From out of a huge, deep cave comes a loud roar. Then suddenly, another Power Animal appears- Gao Gorilla!! 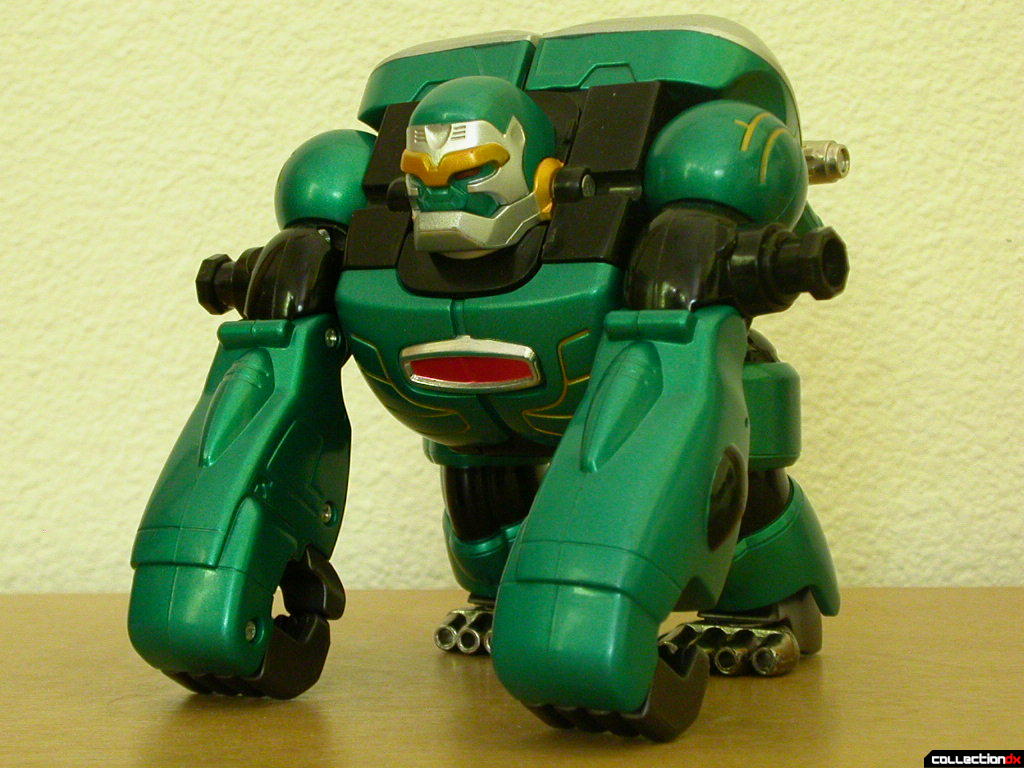 Gao Gorilla (back) is a squat, but powerful looking green Power Animal. Slightly hunchback due to large arms and small legs, it has a sparkly green body with black, dark gray, silver, and gold highlights. There is also green metal-looking plastic on his back. There is die-cast metal in the framework on his back, and in his feet- which rotate side-to-side a little. His legs are jointed at the hips and ankles, so he’s limited there, and because he’s so top heavy he doesn’t balance very well. His huge arms, on the other hand, are very poseable and have two joints at the shoulders, one at each elbow, and the fingers open-and-close together a little bit. Gao Gorilla is a torso/head component PA, and forms the head and torso of Gao Muscle.

For those of you wondering what the differences are between PA-1 Gao Gorilla from “Hyakujuu Sentai GaoRanger”, and its English-speaking counterpart, the Green Gorilla Wild Zord from “Power Rangers Wild Force”, it isn’t as bad as I thought it would be:

Surprisingly, all of the original die-cast parts were left intact during the import process. (Finally-! Way to go, Bandai America!) And, all of the original molds are the same as well. The Gorilla Zord was not released individually, but as one of five components in the Deluxe Kongazord set. Gao Gorilla, also, was released as part of a special release Hyakujuu Gattai Gao Muscle set, but could alternately be obtained individually (as it is here), which it wasn’t for the “PR” release.

Gao Gorilla has turned into one of my favorite Power Animals because of the glistening green coloring, and his wide range of poseability. But there is one more, important reason why I got him... 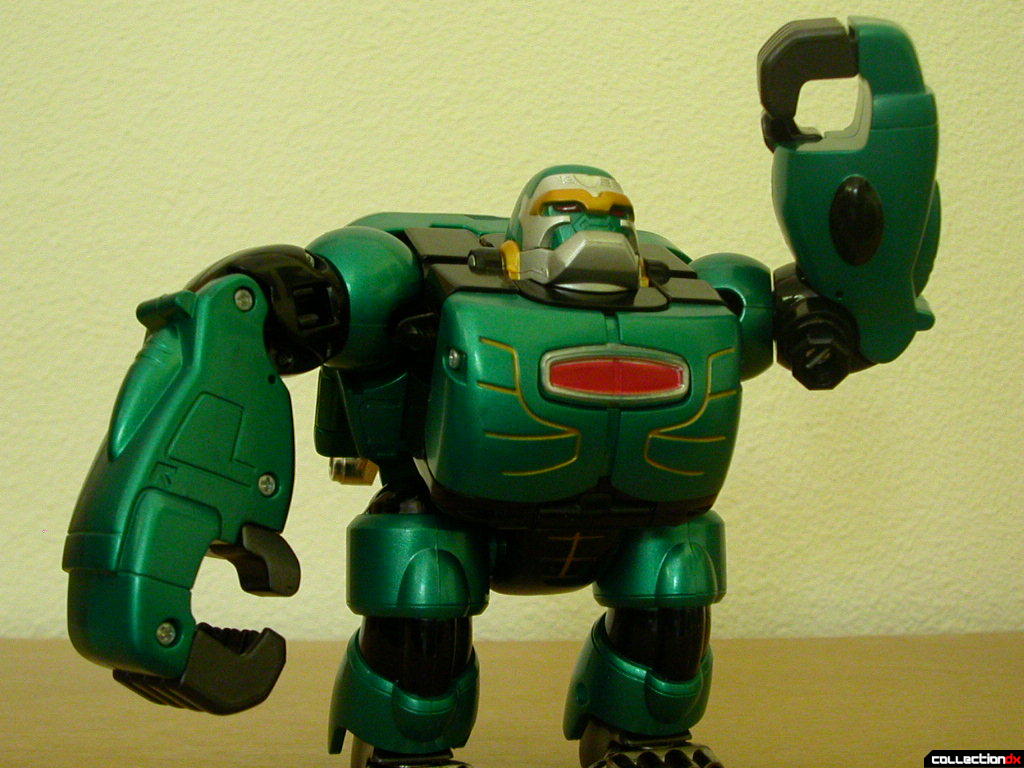 Bounding through the forest, Gao Gorilla threw some balls of light into the forest ahead of him. When they hit the ground, a giant banana tree grew high into the air, which the Power Animal jumped into. From his high perch, Gao Gorilla plucked and threw many Banana Bombs from the tree at Bulldozer Orgu, which sent it sprawling to the ground. Seeing an opportunity, the GaoRanger call forward Gao Polar and Gao Bear to help; Gao Eagle and Gao Bison also came forward, not satisfied with the first round...

PA-4 Gao Gorilla is the last and pivotal component required to move on to the next humanoid combination mecha from “Hyakujuu Sentai GaoRanger”. Go on to the next page to review the Hyakujuu Gattai Gao Muscle!

[Author’s note: special thanks to CollectionDX webmaster Joshua Bernard for sharing images of his own Green Gorilla with me so I could compare them. Josh, I thank you once more!] 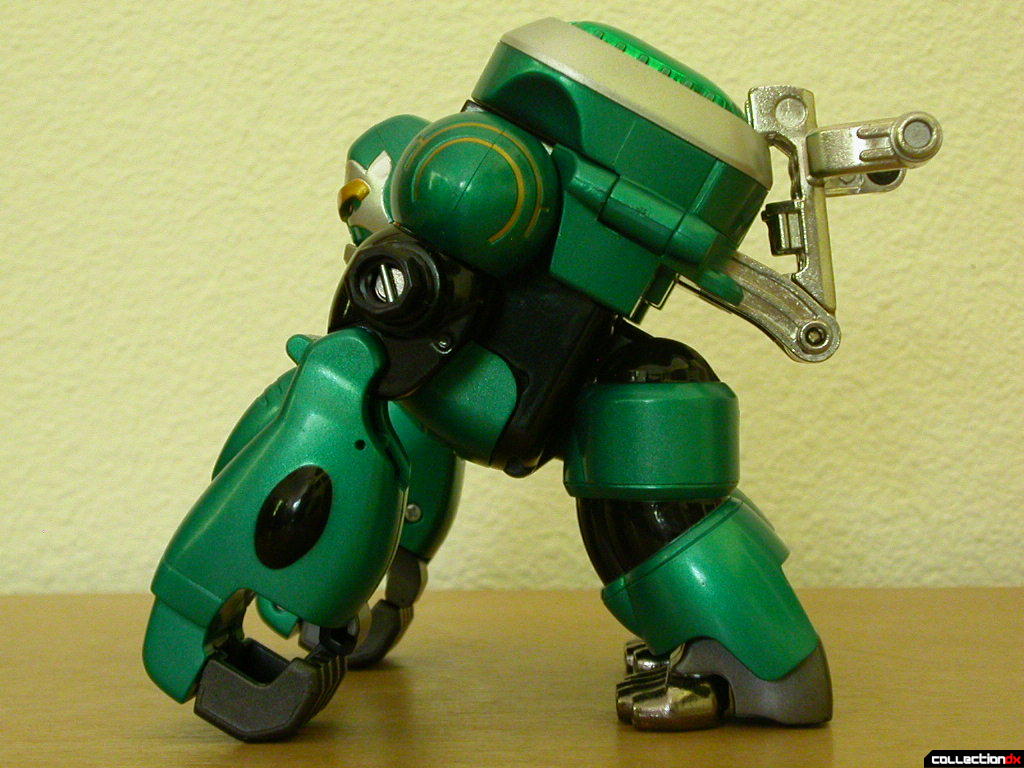 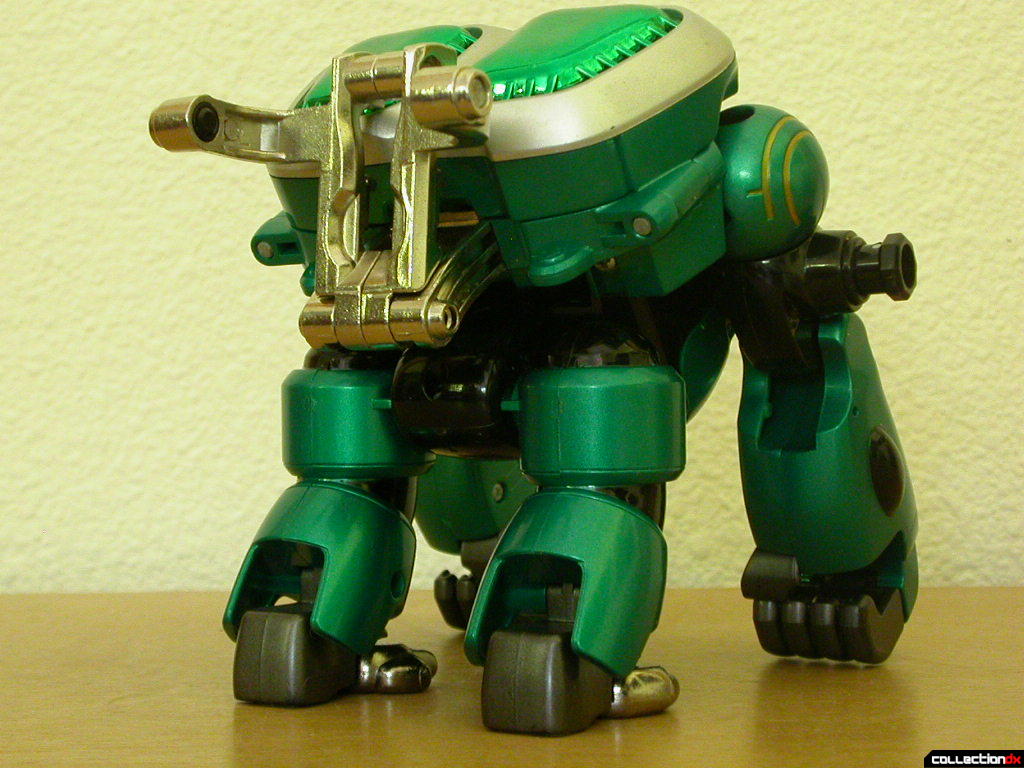 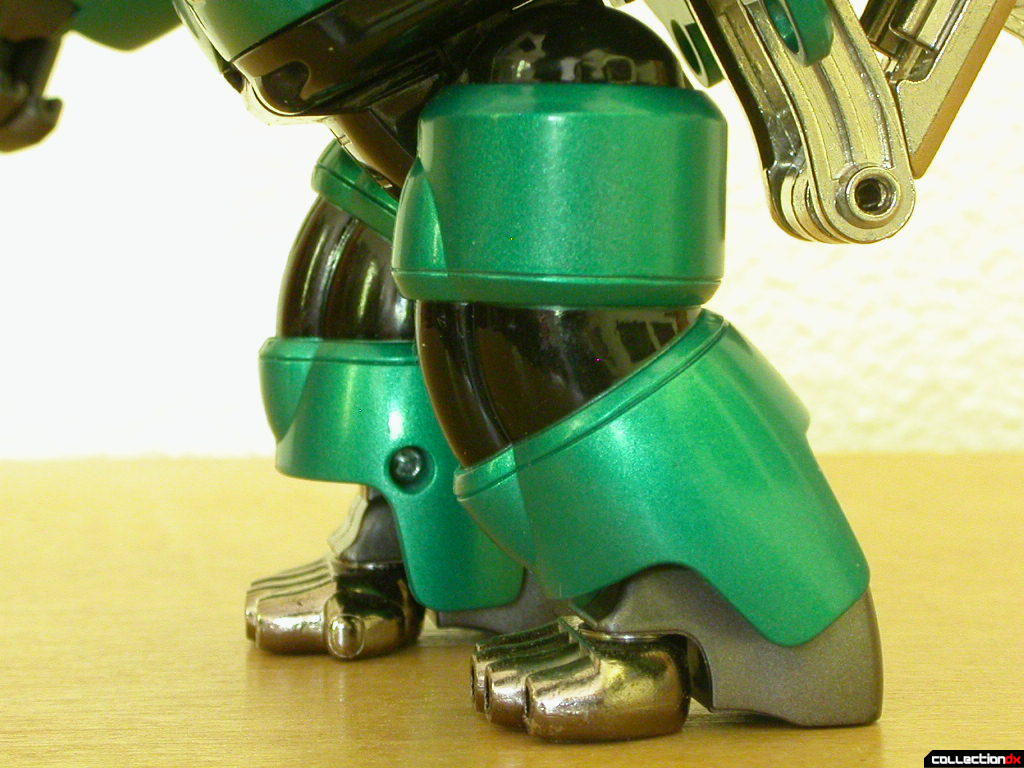 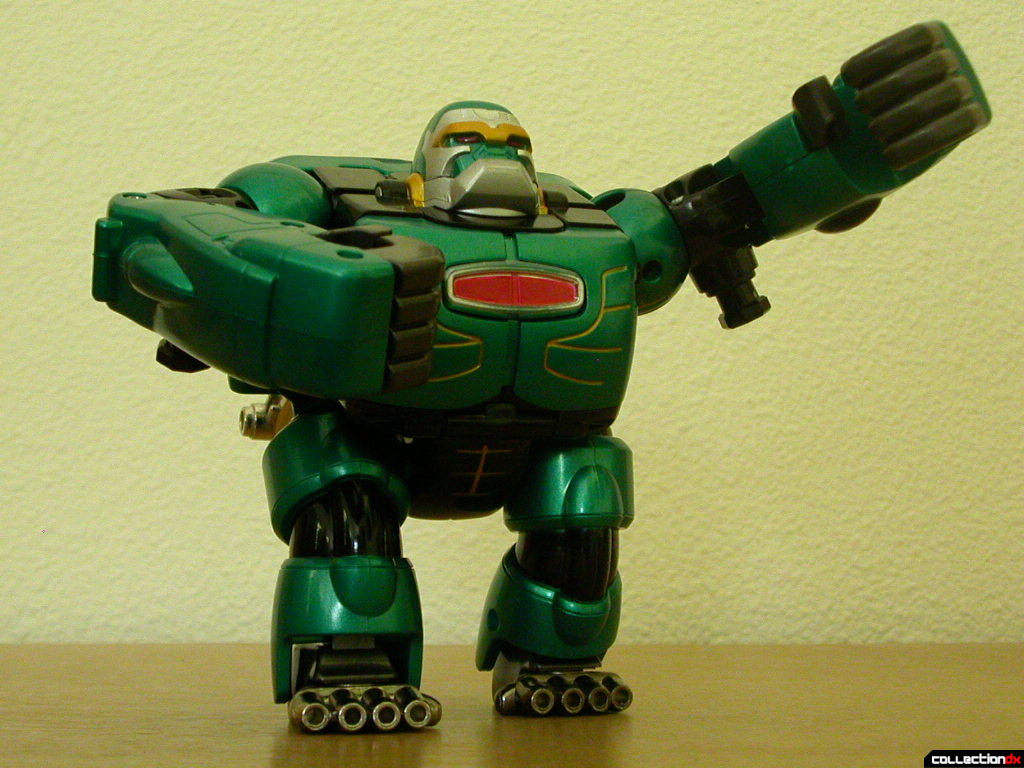 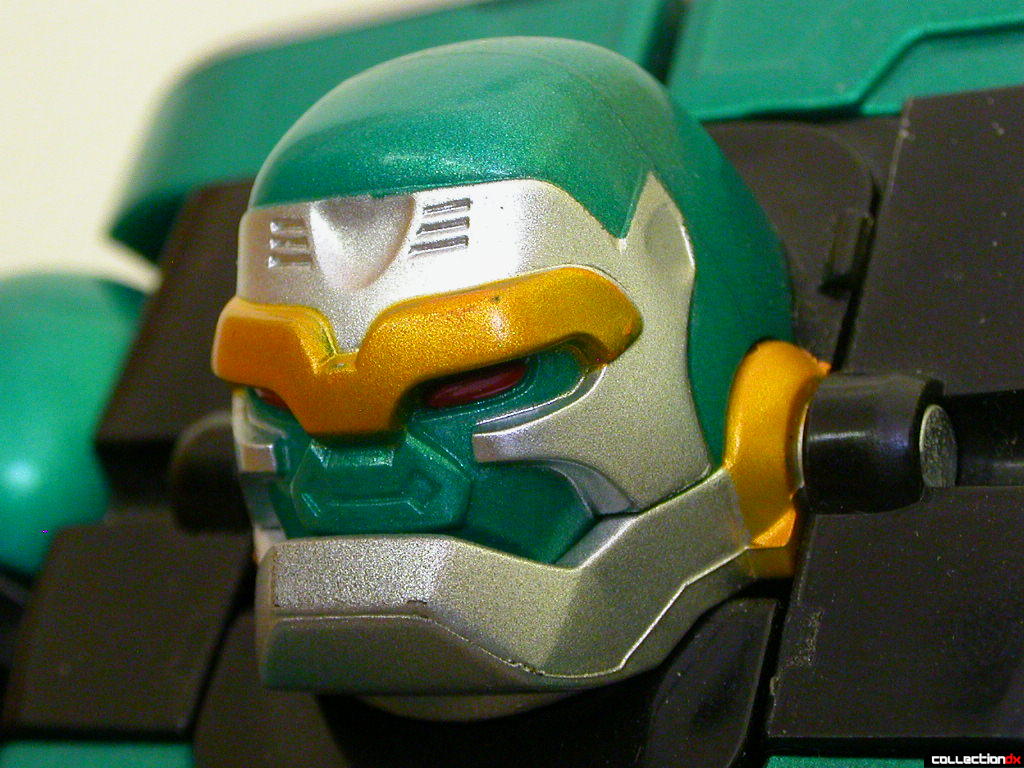