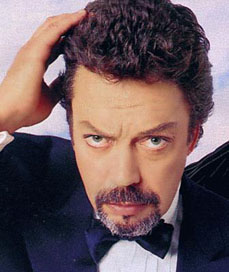 This is about hotels, divorce, and crossdressing.

Click [HERE] to have an umbrella fight with Tim Curry.

I wanted to inform you that CollectionDX is now responsible for ecological waste, because I burned the two "SDCC Special Report" episodes of Destroy All Podcasts DX onto CDs, and after two listening sessions that consisted mostly of riding the fast forward button, both CDs were thrown out the window, landing on the shoulder of 287 North around Bernardsville, NJ.

They will most likely stay there for millenia, eventually fossilize, and will undoubtedly be unearthed by whatever alien archaeologists or cockroach descendants or sleestak happen to be tunneling through that particular layer of strata. And then they will listen to the CDs, and I guarantee that they will throw them out the window of whatever futuristic vehicle they happen to be riding in, as I did.

This is your fault.

Why in the great blue hell would you record a podcast at San Diego Comic Con and spend the time talking about something completely unrelated to San Diego Comic Con? Did you know that Shinji Aramaki was walking around Comic Con? Maybe if you weren't working so hard to come up with a list of every production in which Tim Curry has played a cross-dresser, you would have recognized him.

And even if you didn't, you were surrounded by hundreds of industry professionals from the comic, toy, and entertainment businesses. Why wouldn't you find them and interview them? You had someone from Comic Book Resources on the podcast. Why didn't he talk about comics? What was the point of going to SDCC? You could have stayed home and recorded the exact same podcast in your basement.

Instead, you went to the con, sat on your asses and talked about an old sitcom starring Tim Curry and John Ritter. Does that have anything to do with toys, or Japanese culture, or anything that CollectionDX or SDCC is remotely connected to?

You seem to be confused. I think this is the podcast you're looking for: http://gundamnmahq.blogspot.com/

This podcast gave my rabbit cancer. And then it gave the cancer cancer!