Roland Williams is a typical, average kid who likes to read comics. Upon entering a haunted house one day with his friends, he was given the powers of super speed and the ability to transform into the Green Hunter Beetleborg, his favorite character from his favorite comic series. He was given these powers by the kooky ghost Flabber. Later, as per a needed upgrade to battle the evil Nukus and Horribelle, he Roland became the Titanium Silver Beetleborg! With the help of Drew and Jo McCormick, Roland fights the corporeal sketches of Les Fortunes and the maleficent cult of the Crustaceans!

Seeing as how I was seven when I got this toy, I don’t have the packaging to show off! I can say that the box has a nice splash on the front showing off the cycle and the Beetleborg along with a nice window revealing the figure inside… 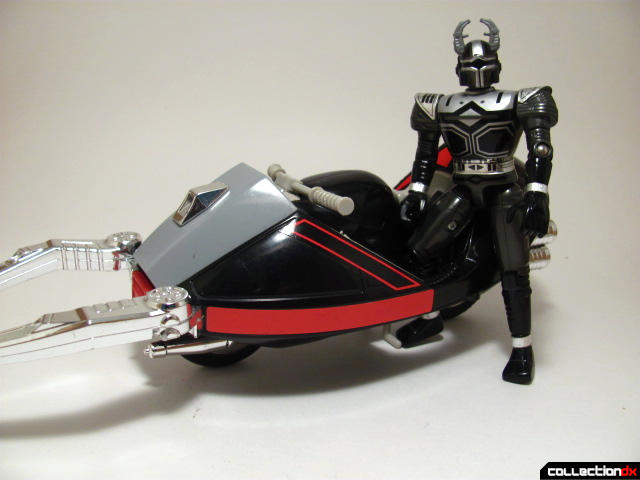 Being from the tokusatsu line of shows entitled Metal Hero, the Titanium Silver Beetleborg is rife with little lights, divots, and metal detail, such as rivets, gaskets, and other such industrial components. Though some of these details are present via stickers, most of them are actually sculpted detail or tampoed on, a very nice thing to see on any toy and surprising to see on such an old toy. 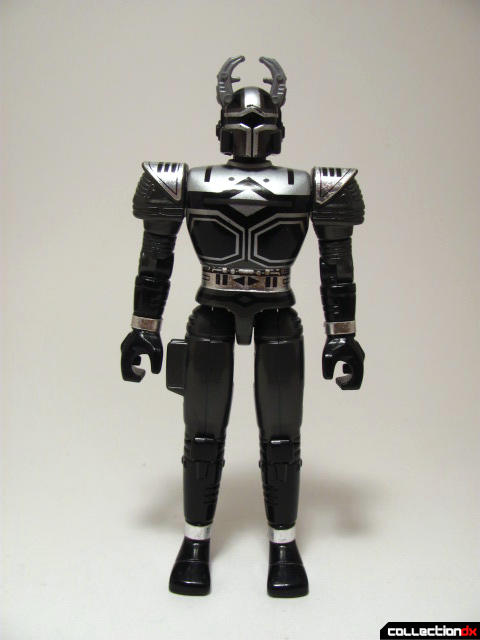 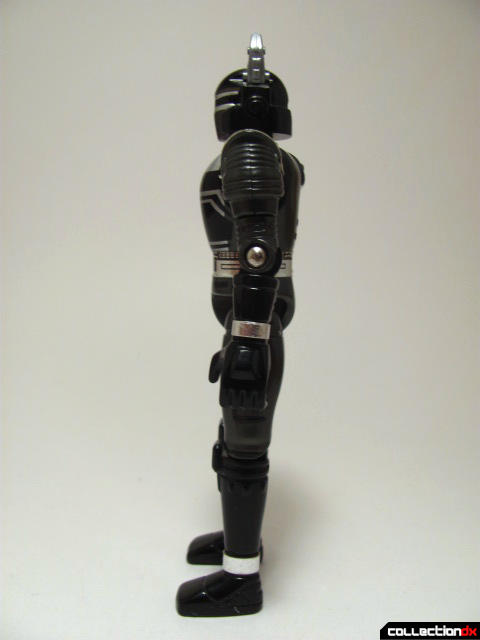 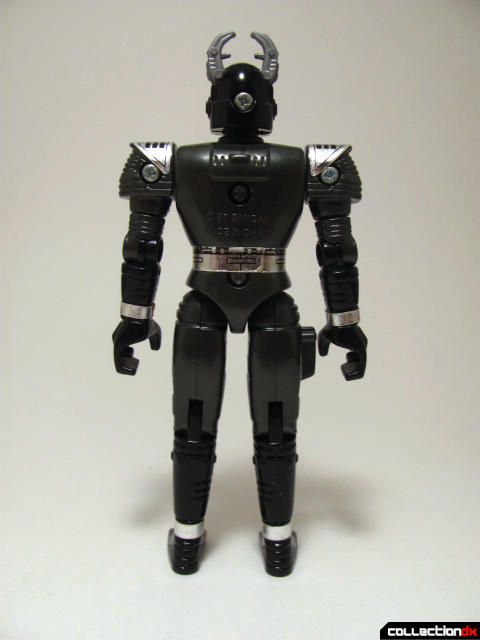 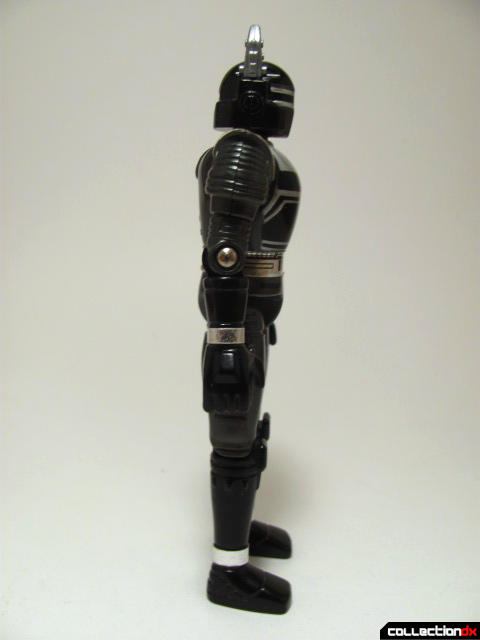 The black is flat, yet not necessarily matte, and gives a nice retort to the shiny silver of the stickers and paint that is present on the figure. The colors all work well here and look really good together, giving the overall feel of a “metal” hero for sure. The detail is thorough, thoughtful, and implemented well. 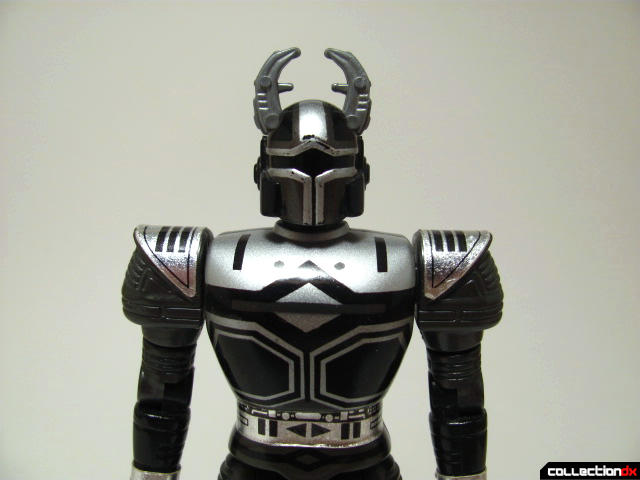 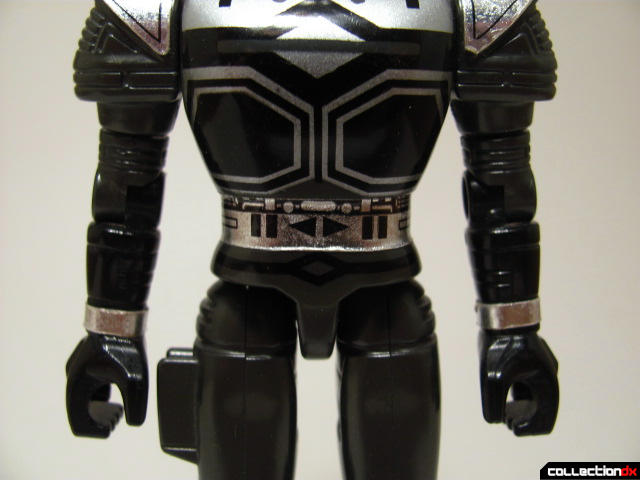 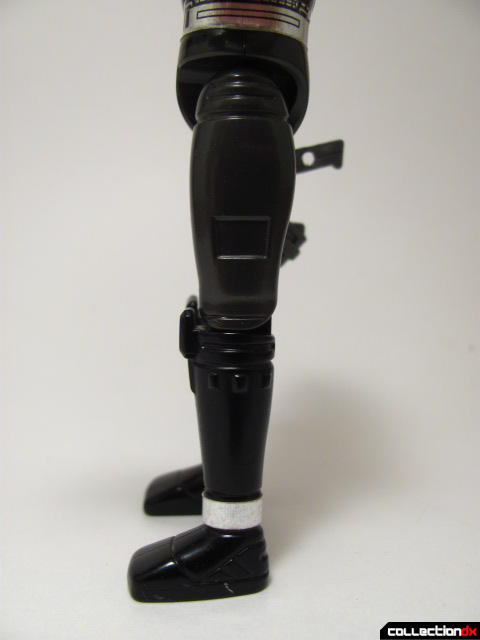 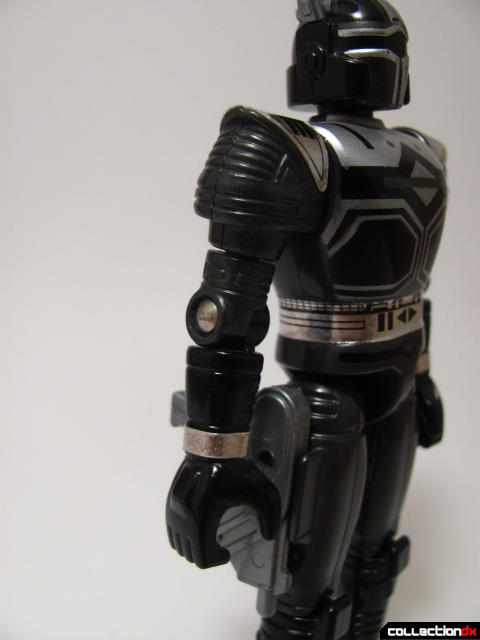 To see this attention to detail is very warming.

It’s the nineties. It’s a toy from a Saban television show. I think you know where this is going:

the Titanium Silver Beetleborg suffers from a lack of poseability. Though the figure’s joints are well hidden and disappear into the sculpt of the figure quite well, there aren’t very many joints in which to use. He sports ball jointed hips, single-jointed 90 degree knees, bicep swivels, head swivel, and the most pitiful ball-jointed shoulders in existence.

With that said, the figure can still pull off an okay range of poses. Yes, it is limited what poses you can do well and how far each joint can move, but with a little imagination and balance you can still effectively pose this figure. 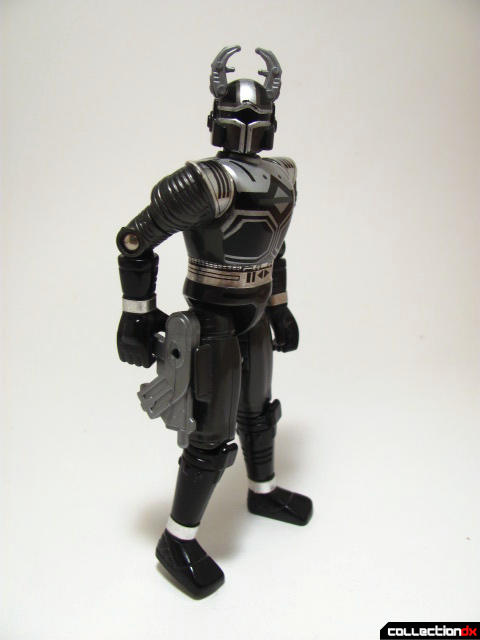 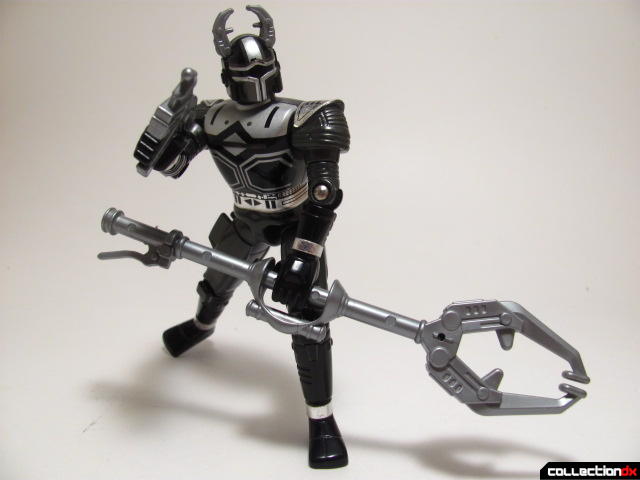 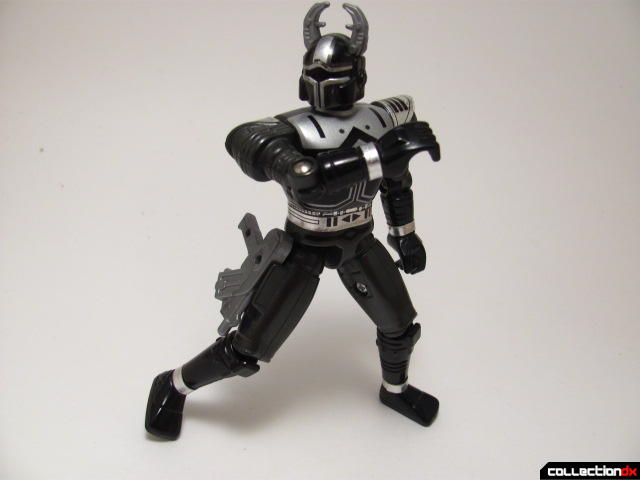 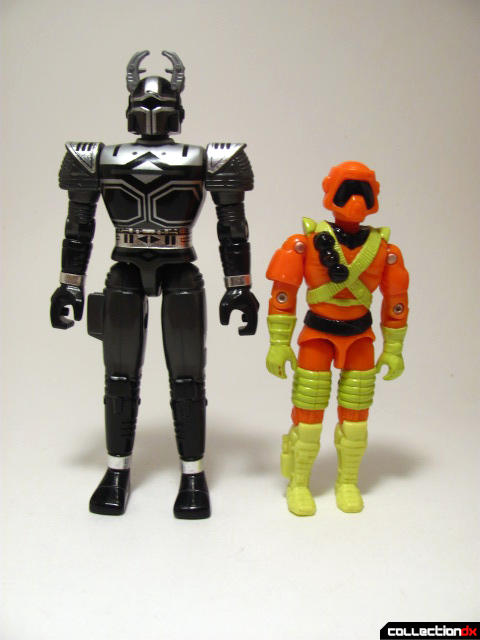 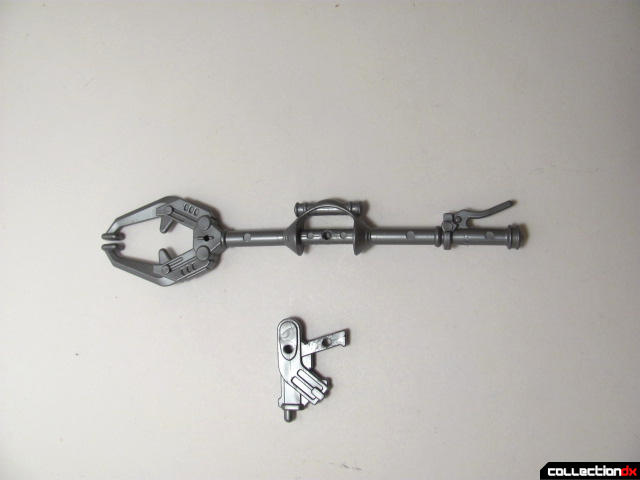 The laser and the Grappler are cast in solid grey plastic and are also given the same attention to detail as the figure itself. Though the solid grey color makes the accessories a little bland, they do not differ from the actual props very much as they are mostly grey and black in the fiction. They are made in a slightly soft and malleable plastic and are attached to Titanium’s hand via a peg system. The Sonic Laser also attached to his right thigh via the same peg system 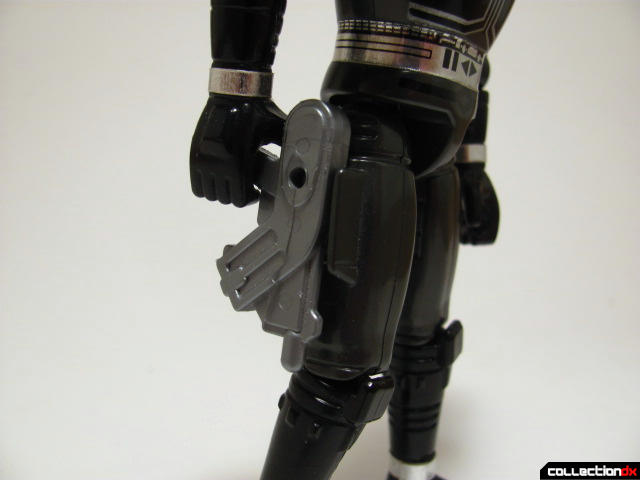 Next, and perhaps the main act of the show, is the Titanium Silver Sector Cycle. 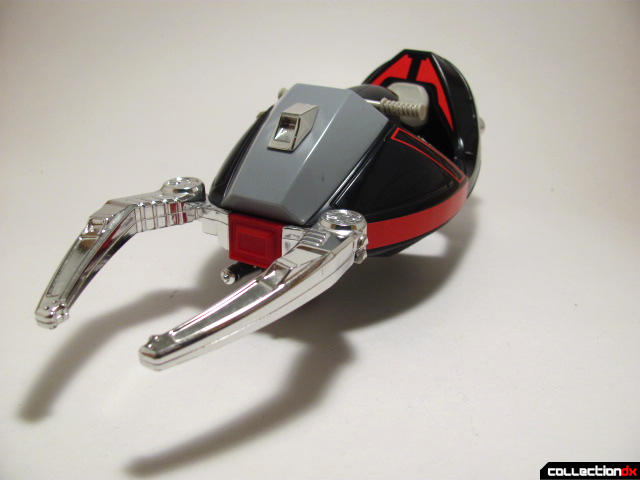 This is the bike that the Titanium Beetleborg rides into battle. Themed in the same stag beetle style as the Borg, it is a hefty and very detailed accessory with lots of sculpted detail, stickers, and VACCUFORM CHROME. 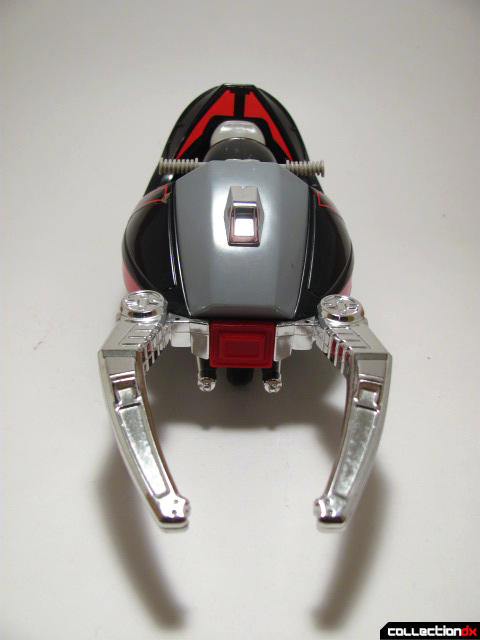 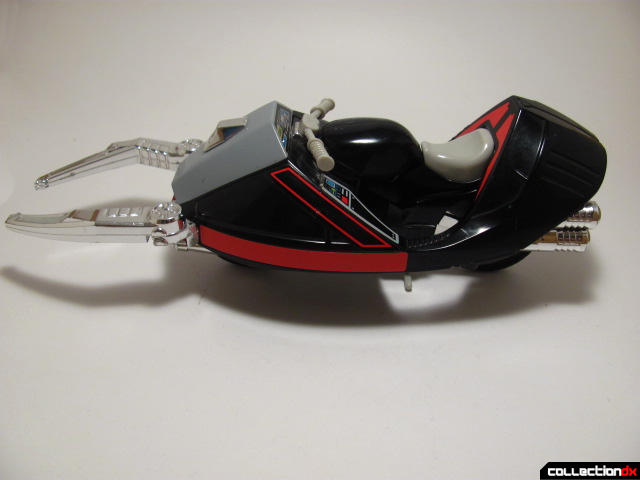 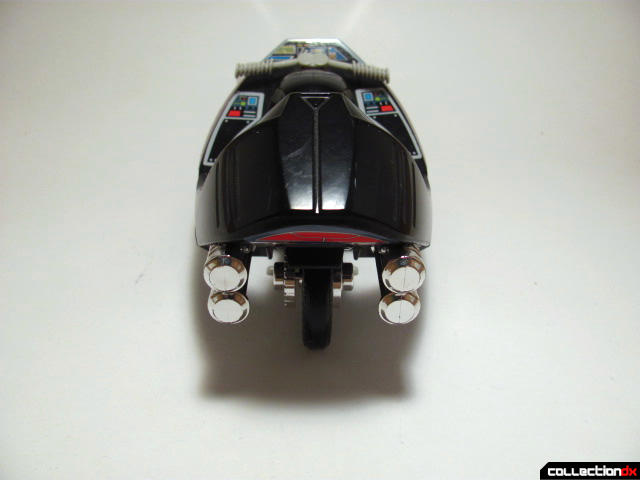 This bike steals the show. It’s got great heft and feels good in hand. The chrome is to die for. If anything says this is a nineties toy, it’s that. The tires, which, I might add, are rubber, roll really well and give a nice, smooth ride for the Beetleborg atop it. The Titanium Silver Beetleborg, with a little fiddling, will sit right on the bike’s seat and hold onto the handles quite well. 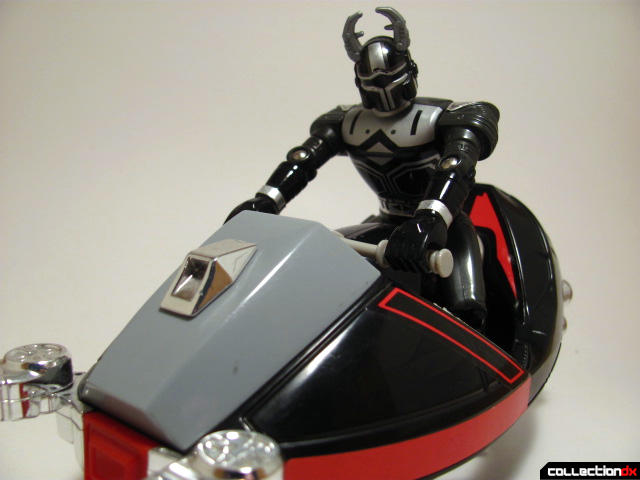 The detail, just like the figure, is staggering. Though half of it comes from stickers, ornate ones, I must add, the Cycle still has lots of sculpted and beveled detail upon it and in some places where you would never expect it, such as on the back wheel brake rotors. 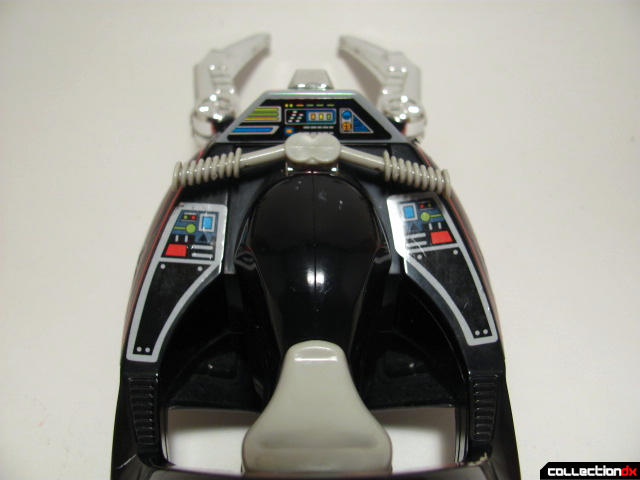 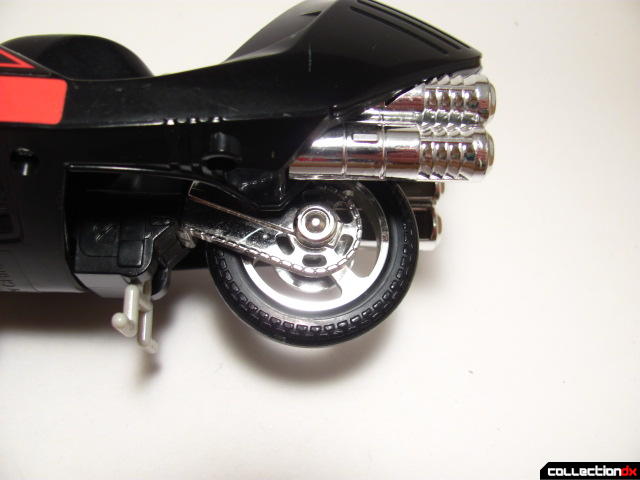 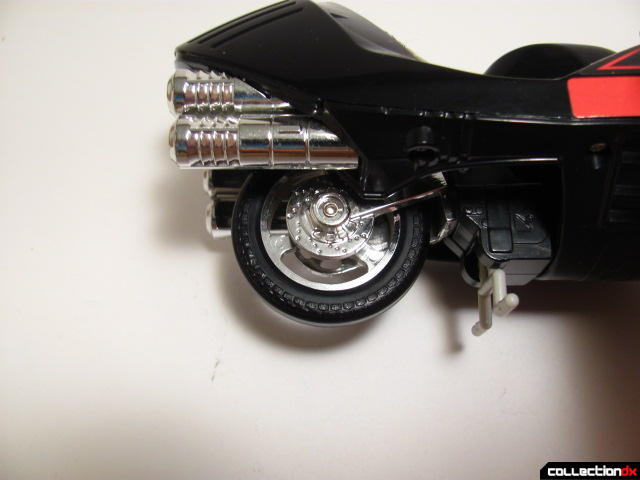 I was in awe when I saw that on the brake rotor there were little divots like an actual rotor. The bike’s chain and gearbox are sculpted on, too. I only see this level of detail on higher priced figures. The fact that this is here on this figure blows me away.

There really is no gimmick to this set other than the fact that Roland Williams can ride the Sector Cycle. Other than that, it’s just a regular toy set.

Big Bad Beetleborgs was my first introduction to tokusatsu, though it would take me eleven more yeas to learn that term and learn about the magic of the series. This toy was the encapsulation of my childhood and is still one of my favorite toys. I feel that it deserves that love, too. With fantastic detail, both figure-wise and cycle-wise, and playable articulation, the Titanium Silver Sector Cycle set is a great toy from the nineties. The articulation, though limited, is still functional and allows the toy to certainly be played with and posed. To anyone who watched Beetleborgs or who wants a fun, retro yet functional toy, this is certainly one to look out for. 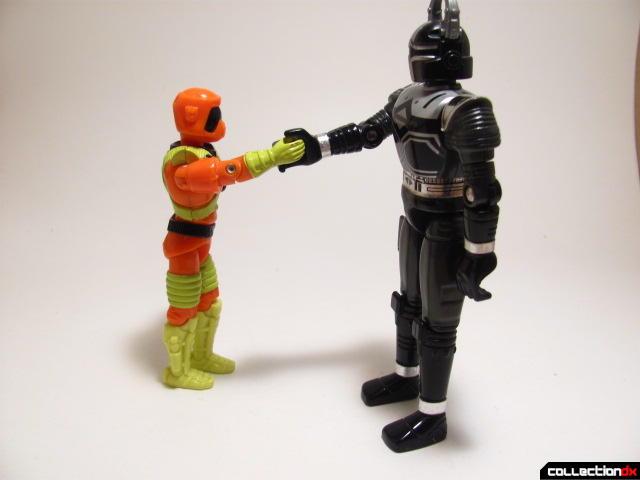