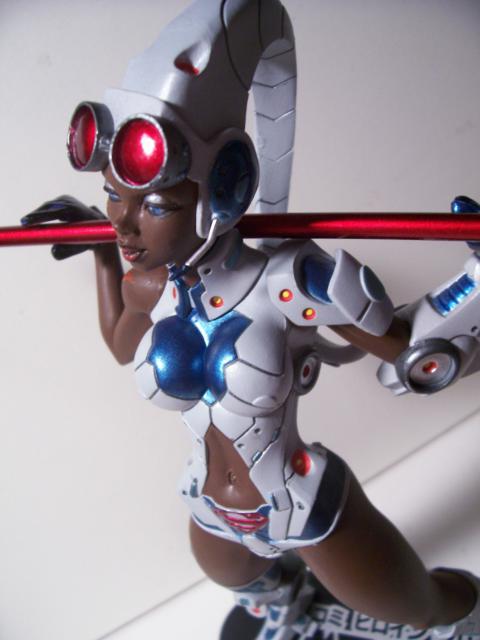 Character.Among the new November 2010 DC Direct releases (along with Supergirl version 2) is a new Ame Comi version of Natasha Irons! This is the newest character to inherit the mantle of Steel, from the Superman “family” of characters. The daughter of the scientist/superhero Steel (Henry Irons), she is the 4th hero to use the title. She uses hi-tech armor with a hammer that replicates the powers of Superman. 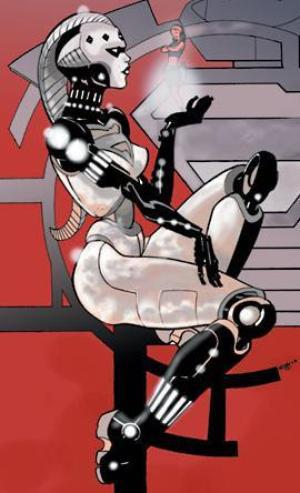 Review. We begin with the basics. Like all of the Ame Comi figures, Steel stands about 8 inches tall and is a statue with no posability other than what is indicted below. 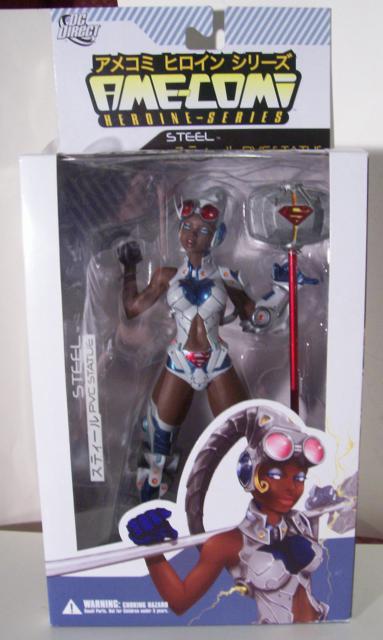 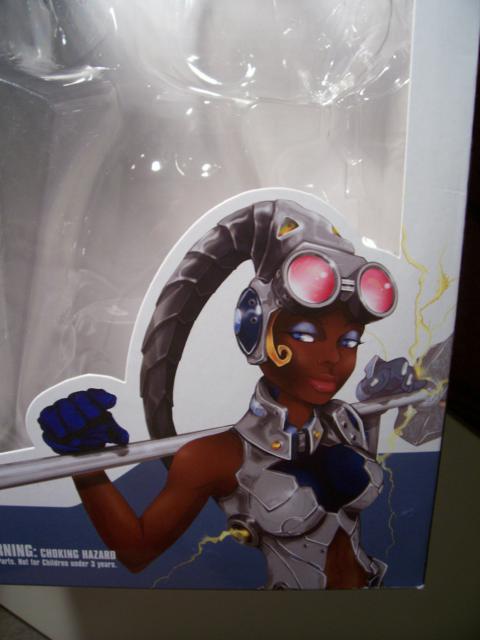 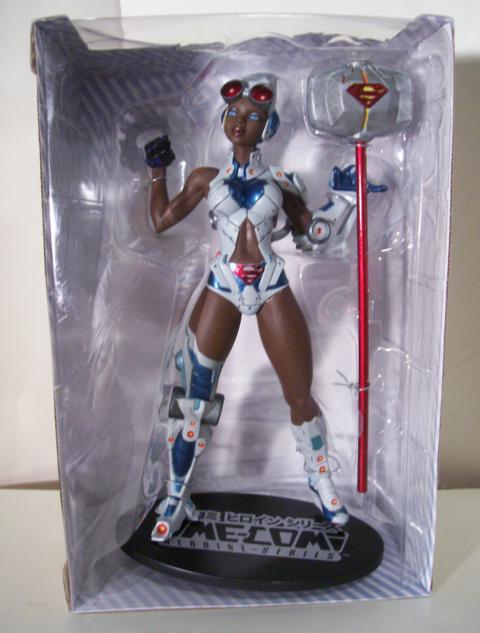 Other than the base, Steel’s only other extra feature is the hammer. 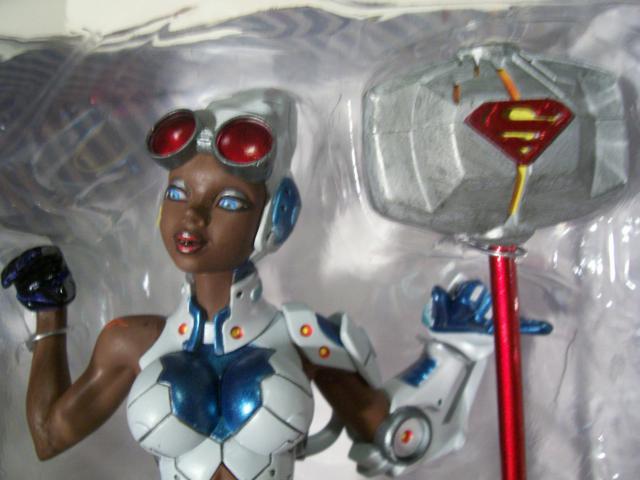 This is a good likeness of Steel (although honestly, her current armor hasn't been around for too long)-on the attractive side but not too sexy. The Ame Comi figure line has been significantly improving since the very first ones I reviewed for ADX. Details are better and things like the seams and the paint bleeds are largely gone.front. 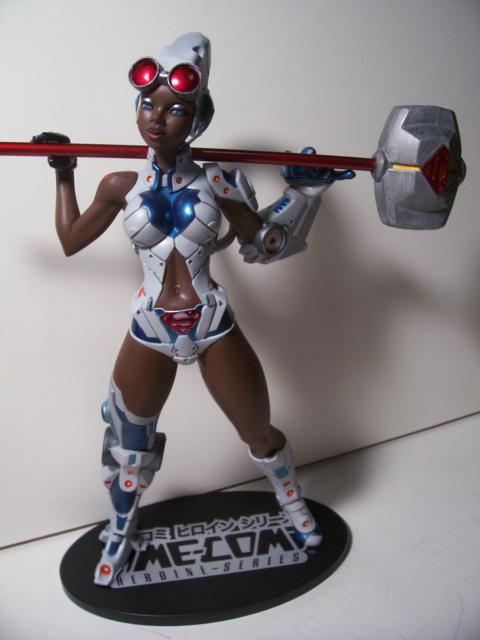 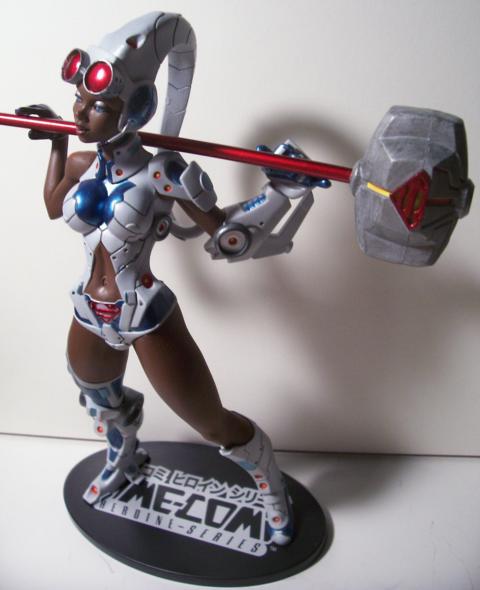 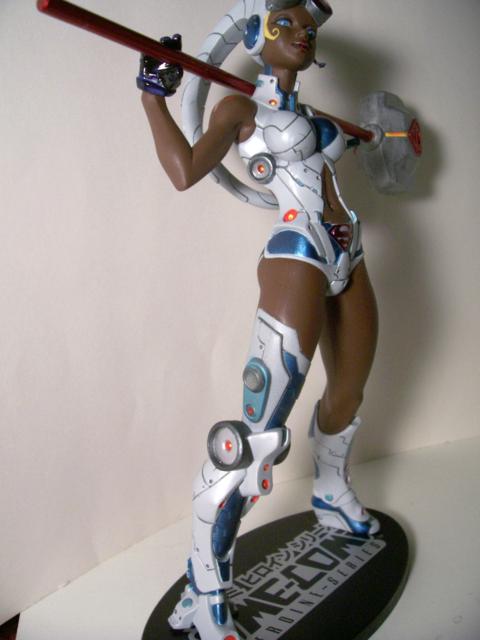 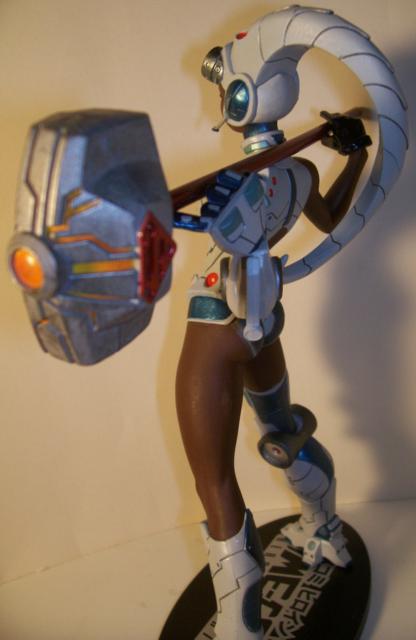 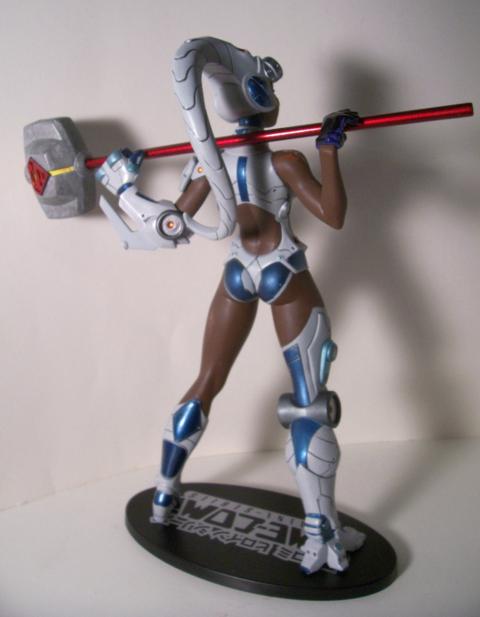 This is probably the first black character I’ve ever seen as an anime type girl statue. And I like the fact that the facial features on the figure are somewhat accurate and not just a black version of the generalized features that you see on most anime statues. 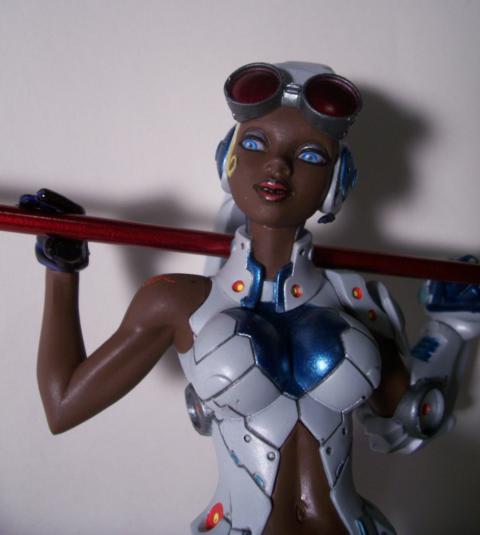 Her helmet and other details are excellent 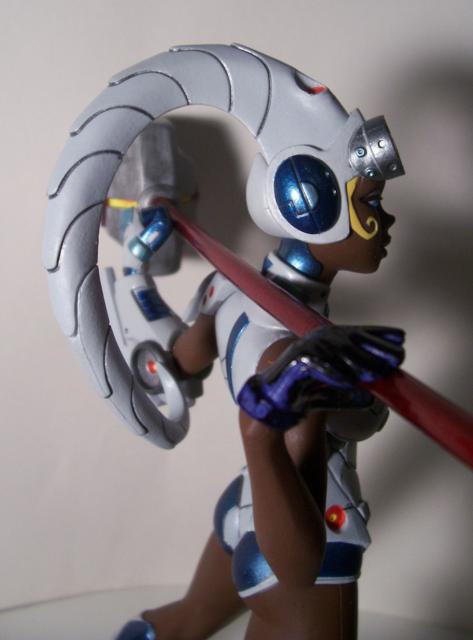 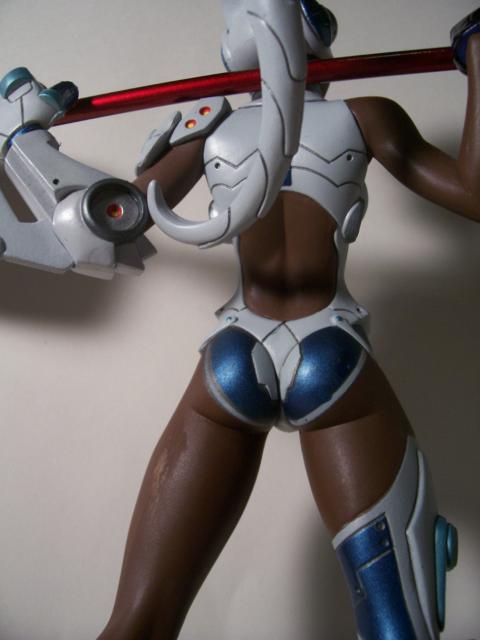 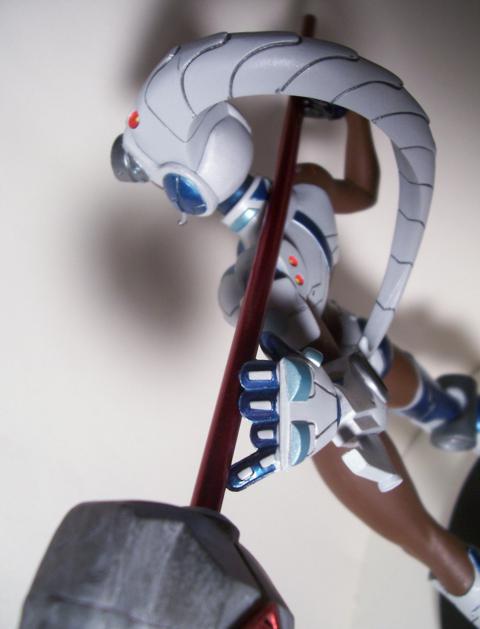 The front shows off her nice breasts and some toned abs and bellybutton. No nipples or excessive areola or other curvy details as you find on the Japanese statues. As I’ve said about the other Ame Comi figures, they’re still basically corporate icons, so they’ll probably never reach the level of sexy that most of the Japanese statues do. 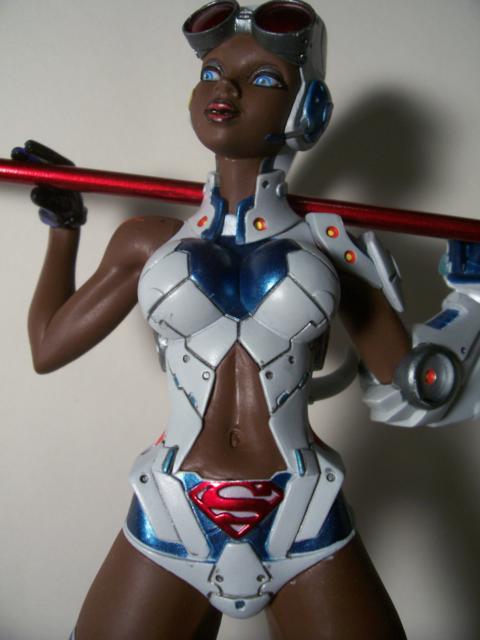 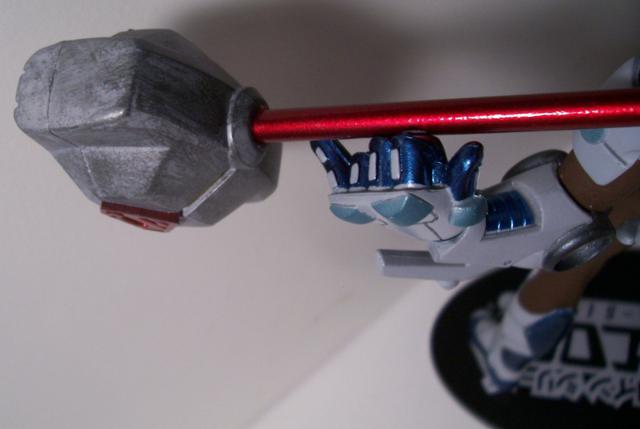 I guess the eyes are one of my complaints. From one angle, she looks great and carries a great confident, sensible look,but from the wrong angle, the eyes on the statue make her a little odd looking (see above). 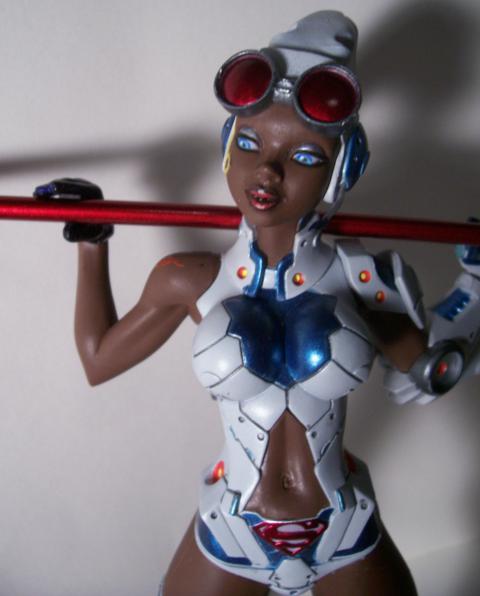 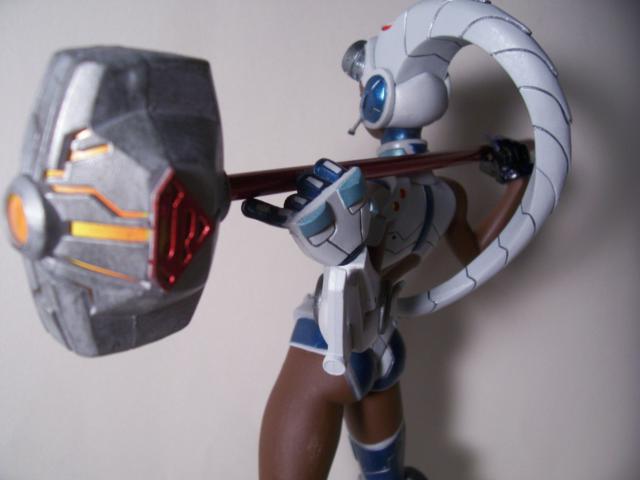 Finely painted details, like the tattoo on her right arm are excellent. 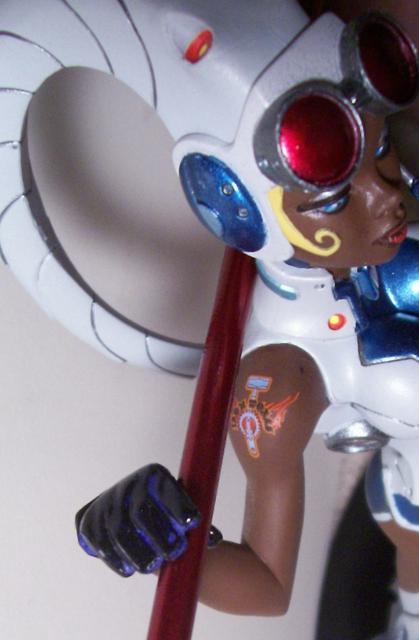 The left hand on Steel can be rotated and is adjustable to allow some posability with Steel’s hammer.

The ass on Steel is especially nice. In fact, its clearly painted to disguise the fact that its supposed to be bare cheeks around the armor. 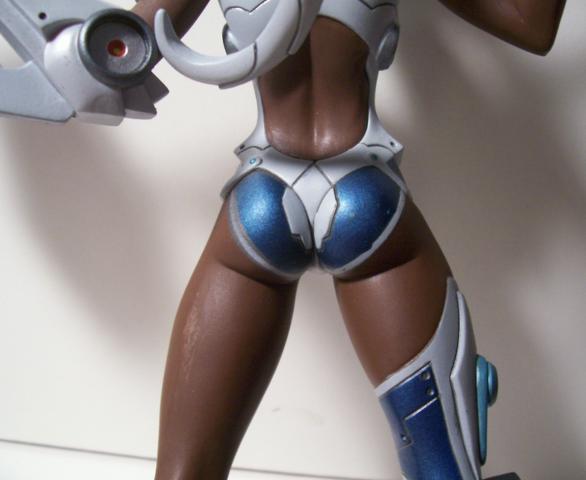 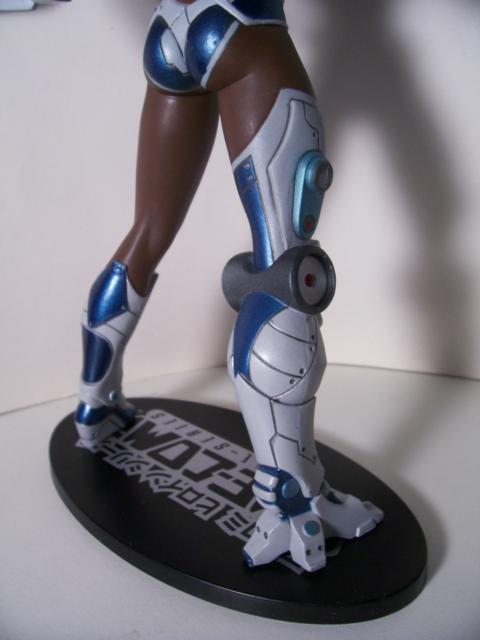 Good details on the boots and legs. Solid articulation with the base. 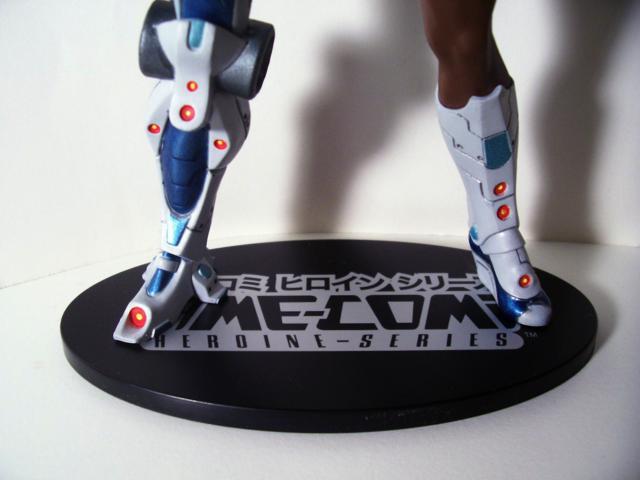 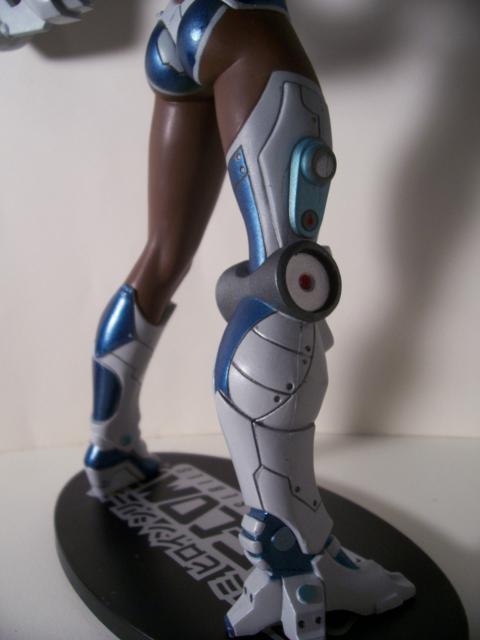 Overall. The new Ame Comi figures have been well done and they’ll need to be in order to be competitive with Marvel/ Kotobukiya’s Bishoujo statue line. Ame Comi has thankfully, taken a distinct turn away from the really anime-looking figures (the big eyes, small necks, and etc.) towards a more real look. It’s a good, solid, conservative figure. Not too sexy, but enough good stuff to notice. Plus, probably one of the only black women to be depicted as an anime statue!