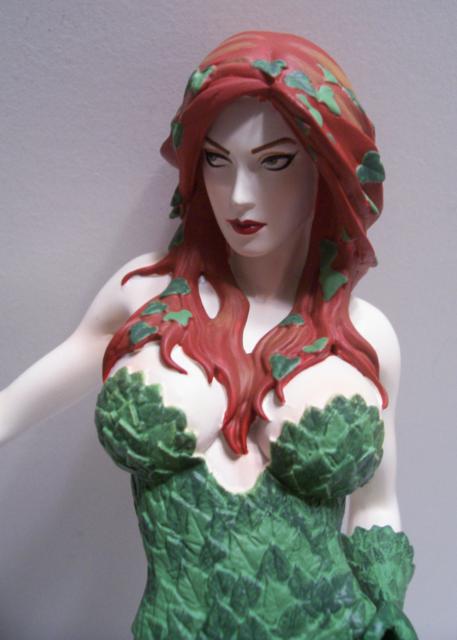 Character. Poison Ivy (aka Pamela Isley) was created in 1966 mainly as a deadly poison-themed seductress. In her modern incarnation, Poison Ivy remains a femme fatale, but in addition to a mastery of poisons (including an immunity to most toxins) she also commands a vast array of mutant plants. Ivy obsessively cherishes plants and their welfare and is none too fond of the men who have destroyed her precious plant world. 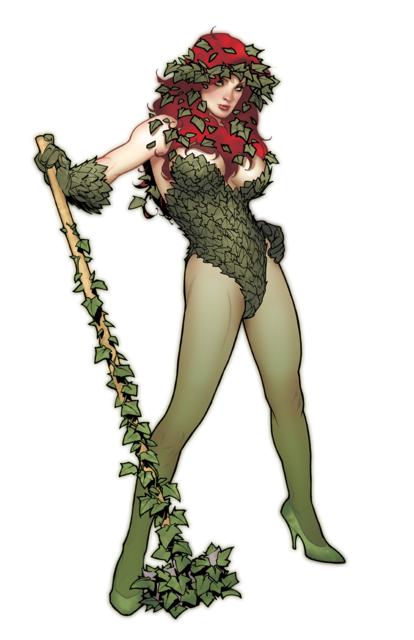 Poison Ivy is one of Batman’s better known villains and was featured in 2 animated series Batman: The Animated Series and The Batman as well as in the Batman & Robin film where she was portrayed by Uma Thurman. Ivy is probably one of Batman’s most recognizable female villains after Catwoman. Following some episodes in Batman: TAS, Ivy is often teamed up with Harley Quinn, the Joker’s on again, off again girlfriend. A statue of Harley has also been released in the Covergirls series as Poison Ivy’s compliment-so hopefully, I’ll get to review it soon also.

Review. The statue comes in a 4-color cardboard box 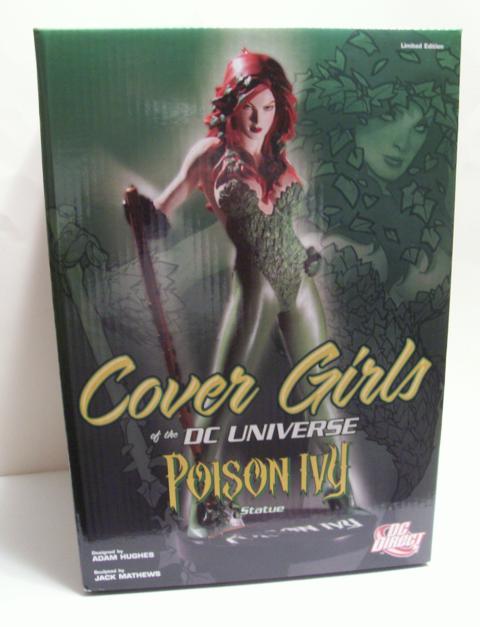 with the original art. 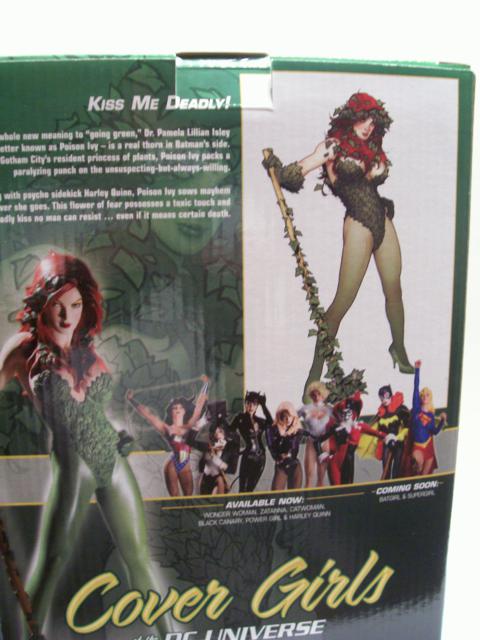 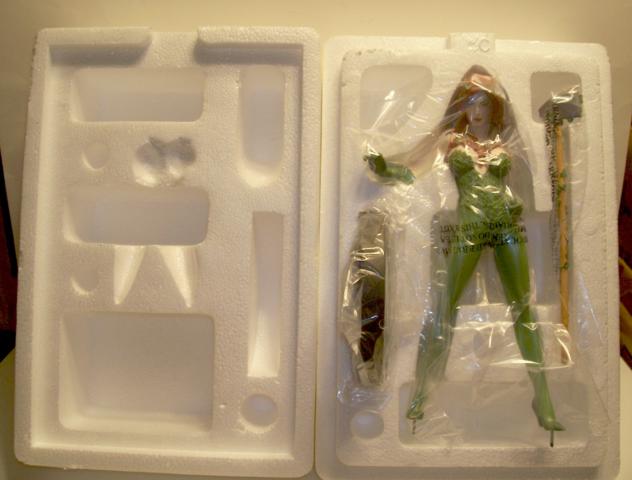 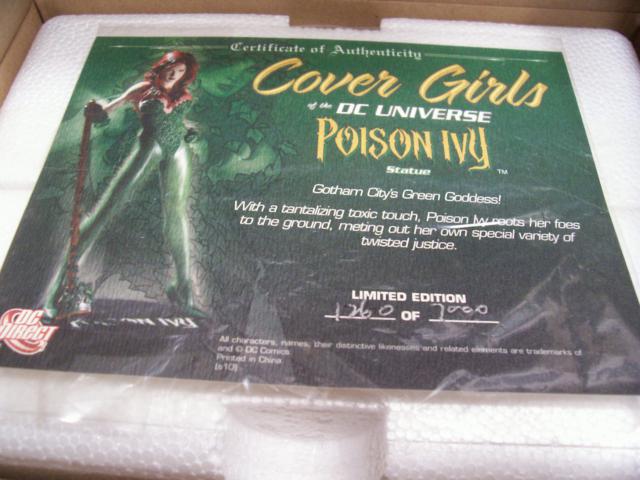 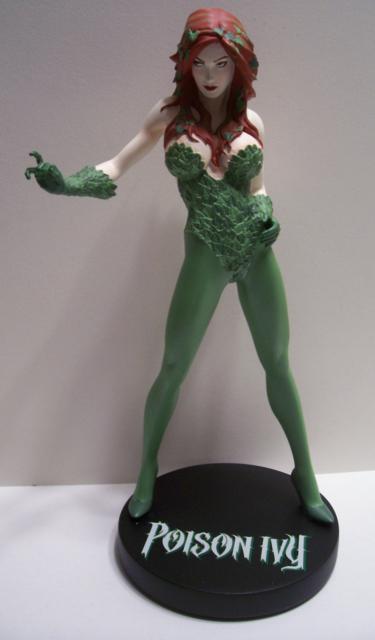 The axe is included separately.

The axe requires some care during set-up since the statue is porcelein, it doesn’t just fit into Ivy’s hands the way it would if it were a PVC statue. It actually needs to be fitted into the hand when the statue’s feet are being articulated with the base. There is a tiny but important metal lead that articulates the axe with the base (shown below). 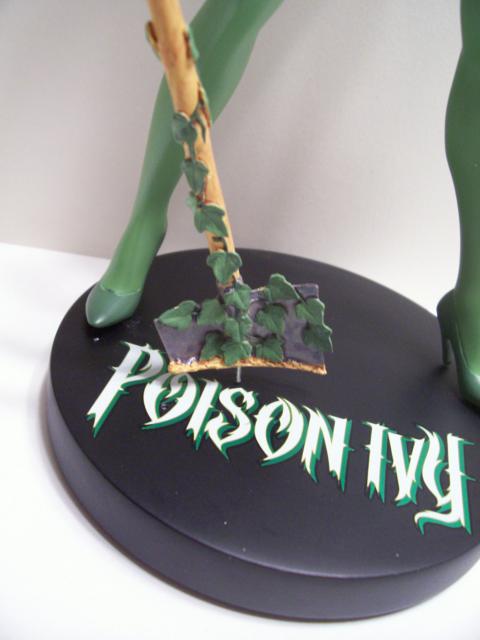 Here is the statue with the axe in pace. Obviously, no posability since this is a cold-cast statue. 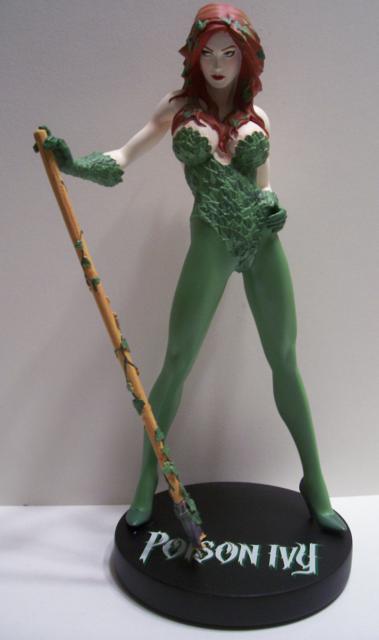 axe in hand. Love the details on the glove. 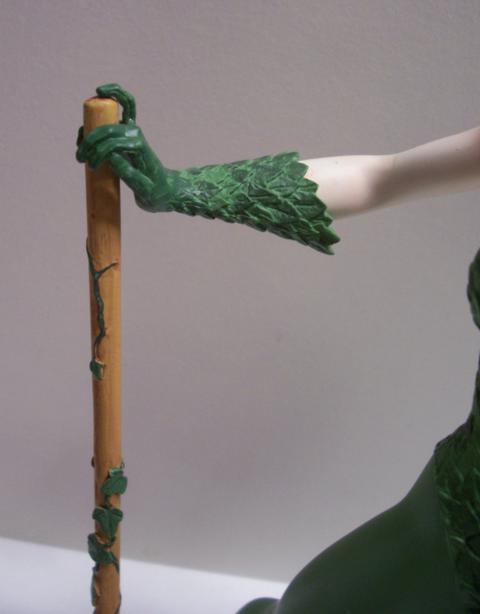 The overall pose/sculpt is a good interpretation although, I thought there could have been a bit more tease/cheesecake on the statue. 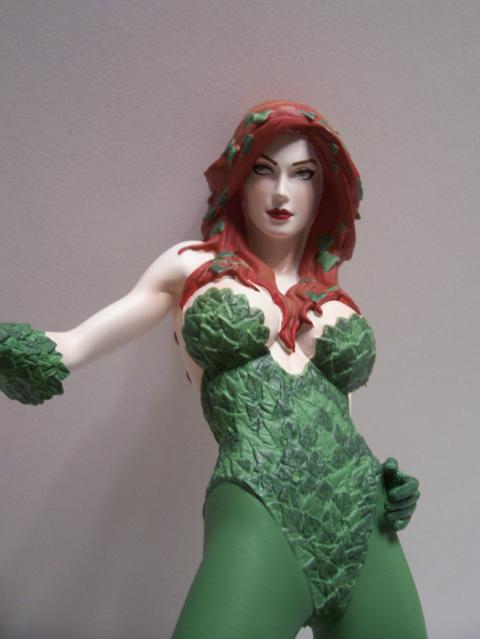 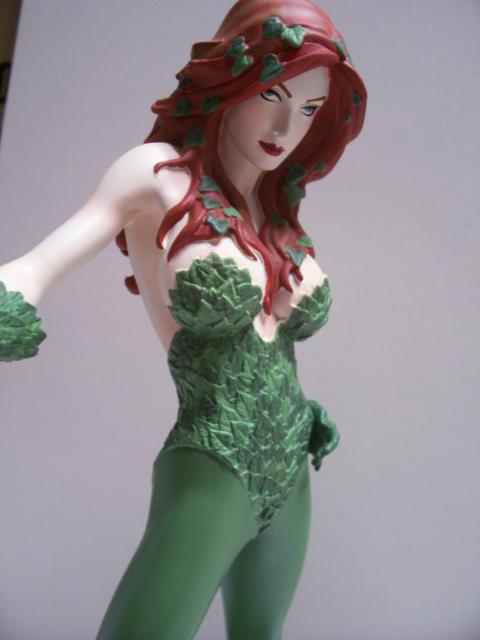 The costume/overall look is pretty simple. They take a more conservative look relative to the more immodest “naked Ivy covered up by plants” motif. 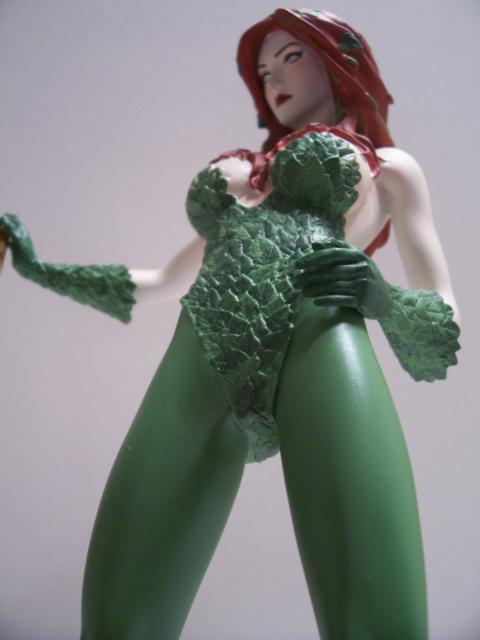 Breast size in Ivy has varied with different artists but here she has the large, round-sized look that is Adam Hughes female characters are commonly blessed with… 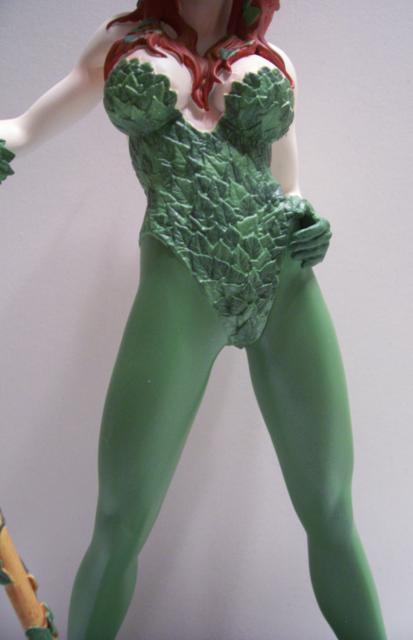 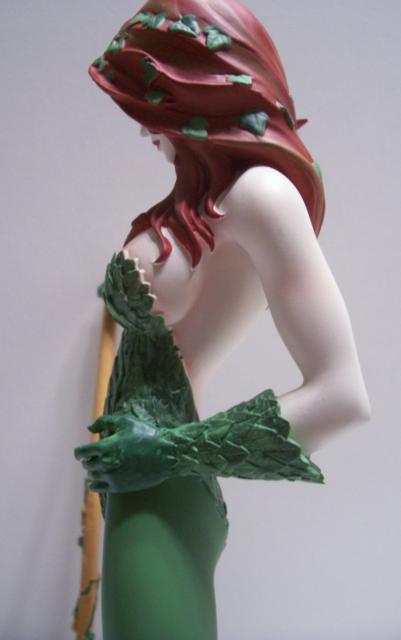 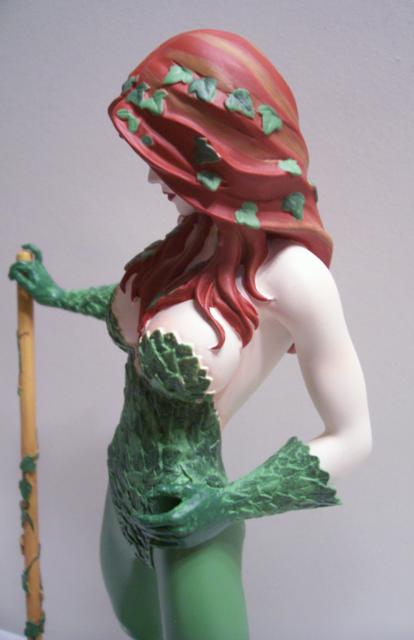 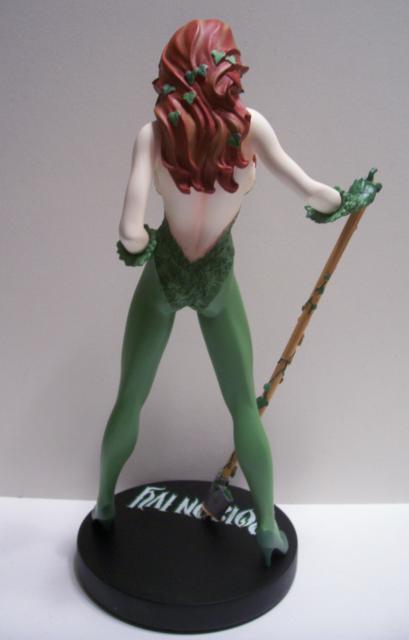 The ivy in her hair is a great touch! 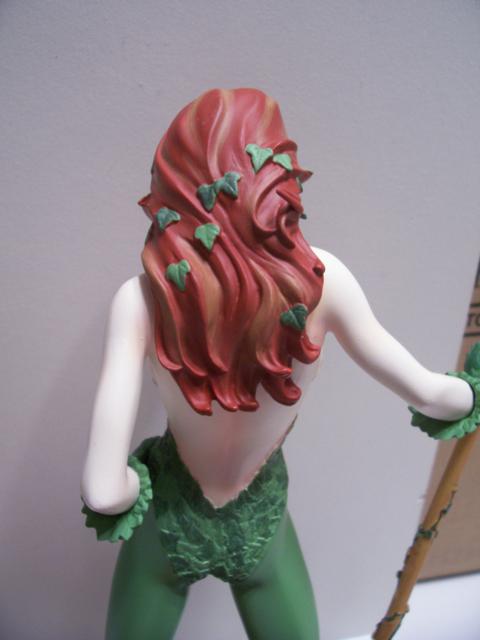 You can see the highlights throughout.. 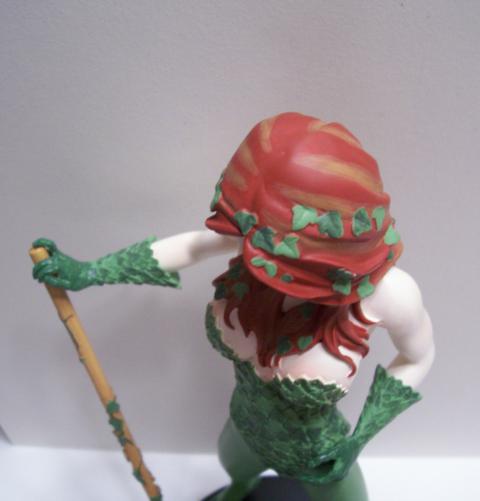 But the arrangement of the costume doesn’t do the presentation of Ivy’s ass any favors. The curves don't quite shine through. 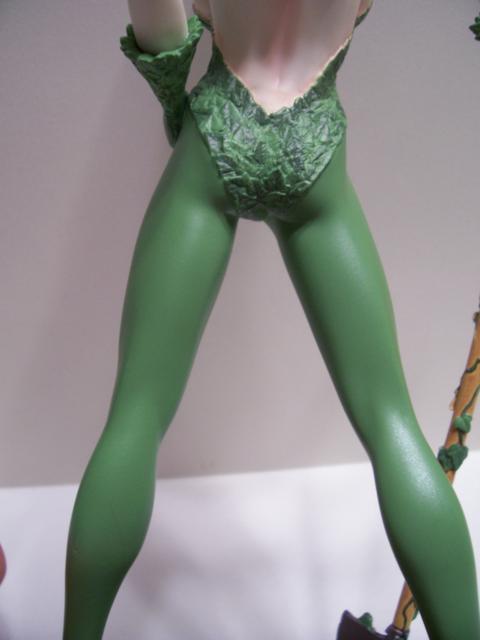 With this version of Poison Ivy, she’s usually wearing booties or something similar. Hughes goes for the high-heeled look. Awesome! (but how does she fight Batman in heels?) 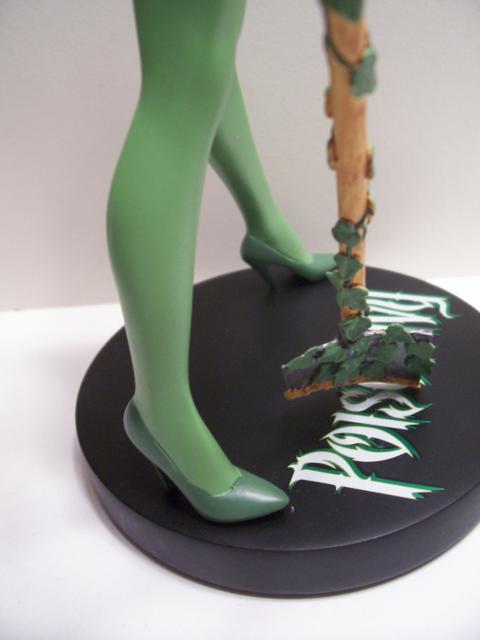 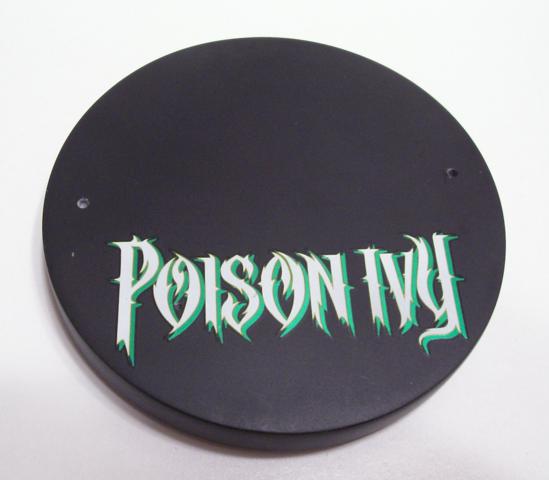 Overview. This is a great statue that probably deserves to be on your shelf alongside Harley Quinn. The two look great together. You can generally get the statue at much less than the SRP and its certainly worth it.That said, I can’t help but find this statue a little bit bland. It doesn’t seem to convey quite as much character as some of the other statues (e.g., Zatanna or Black Canary)-and frankly, for a femme fatale, this rendition of Ivy doesn’t project much sex appeal and really doesn’t have as many curves as I would like it to have (as mentioned above-the ass is pretty much hidden by the costume). One can always argue that she is part of the Batman corporate brand-but as a “DC Covergirl” I guess I would have given a little more kick to it.